Volatility climbs for a sixth day

Whilst the broader equity market saw minor chop across the day, the VIX broke another higher high - peaking @ 16.67 - the highest level since mid October. The VIX settled +1.1% @ 16.21. Near term outlook is looking a little toppy..a return to the 14/12 zone is expected. 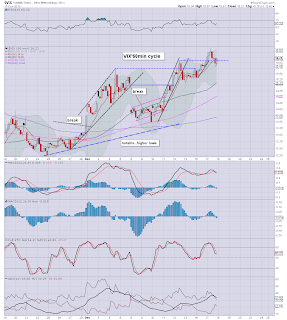 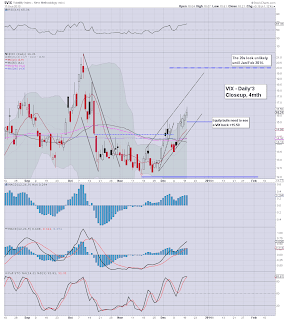 We have seen the VIX generally creep higher..and today was indeed another tiny bit more higher.

Certainly, baring a poorly timed QE-taper tomorrow, I don't think the upper teens..never mind a break above the key 20 threshold is viable before year end.

The Wednesday open is Dec opex in VIX...and how we close the day will be even more important. A seventh daily gain would be something extremely rare.

*It remains notable that two of the longest consecutive upside gains in the VIX, are both in the past month.
-- 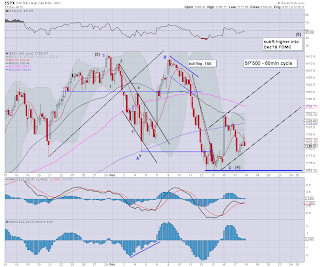 A somewhat choppy closing hour, but still..the bulls should be content with a daily close in the 1780s, not least after the morning weakness, where we again broken into the 1770s.
-

Rest of the week..and indeed year...will no doubt be dependent upon how the market copes with what the FOMC announce tomorrow.

As I've been noting for weeks...it makes ZERO sense to believe the Fed will change policy immediately ahead of the Christmas holiday..and also before the Bernanke leaves.

I think post-FOMC tomorrow, the bulls should be gunning for a daily close in the 1800s..which will open up new highs by the Friday close..and then melt into year end.
--

Market has put in a moderately higher low of sp'1777, and now the bulls are making a renewed push for a daily close in the 1790s..not that it is exactly 'vital'. Metals remain weak, with Gold -$10. VIX has turned a touch red, a close in the 15s look likely..ending the recent 5 day run. 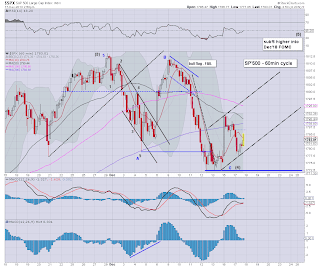 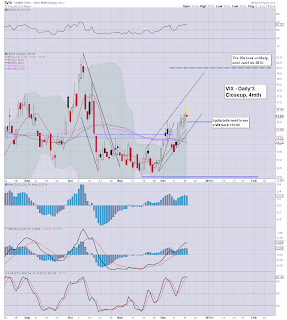 *equity bears should be mindful of a daily VIX chart that is looking a little spiky..and a red close would be a provisional warning of trouble tomorrow.
--

I'm not expecting any dramatic jump in the closing hour. Indeed, bulls should merely aim to hold the 1777 low..if not the rising trend/channel..which at the close will be around 1780/78


3.47pm.. closing hour chop, but it looks like bull maniacs will hold the 1780s..and after the recent weakness..thats pretty impressive.

With VERY heavy QE across Thurs/Friday...bears face severe problems for remainder of the week.
Posted by Trading Sunset at 19:51:00
Email ThisBlogThis!Share to TwitterShare to FacebookShare to Pinterest

The main indexes remain a touch weak, but the earlier sp'1777 low should hold for the rest of today. VIX is looking a little toppy (VIX opex is at the Wed' open), a red close looks viable. Metals are weak, Gold -$11, whilst Oil is also a little lower, -0.1%. 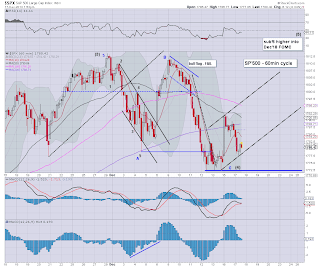 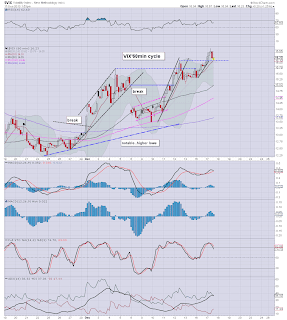 Not much to add. The broader market is likely to see minor chop into Wednesday afternoon.
-

Lots of action in individual stocks...

--
A few other stocks that have been highlighted to me today...

IRBT soars 17%, after the GOOG buys a competitor robotics company
EGHT, +4.5%...with price structure looking pretty bullish for the remainder of the week.
-

Rest of the year..and early January..entirely dependent upon the Fed tomorrow.
Until then...mostly..chop.
Posted by Trading Sunset at 18:56:00
Email ThisBlogThis!Share to TwitterShare to FacebookShare to Pinterest

It appears we do have an intraday floor of sp'1777, and we're now set for some moderate upside chop across the afternoon. A daily close >1790 will be difficult..but regardless, a break <1772 looks very unlikely. Metals remain weak, Gold -$9 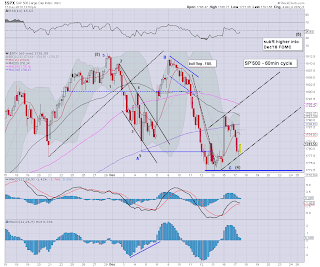 Certainly, no sig' moves until the FOMC is out of the way. 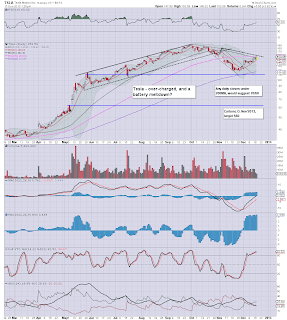 I'd still guess this momo stock has serious issues...its now in the prime re-short zone.
Posted by Trading Sunset at 17:57:00
Email ThisBlogThis!Share to TwitterShare to FacebookShare to Pinterest

A pretty weak morning for the market, but hey..the sp'1772 low from last Thur/Friday is holding, and the 15/60min cycles are highly suggestive that we have just put in a low at 1777. A daily close in the 1790s will be tough, not least with the uncertainty of the FOMC. 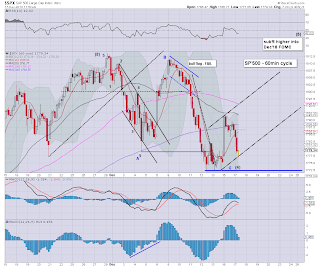 Looks pretty reasonable for a spike-floor, but clearly..the market is weak..and a little twitchy ahead of the final FOMC decision of the year.

Indeed, it will also be the final Bernanke press conference, we're gonna miss him, yes?
--

time for tea:)
Posted by Trading Sunset at 16:53:00
Email ThisBlogThis!Share to TwitterShare to FacebookShare to Pinterest

Equity indexes remain weak, but sitll with a fair bit of downside buffer to the sp'1772 low. Precious metals remain conclusively stuck under old broken support, with Gold -$11. VIX is up for a sixth day, +2% in the mid 16s. 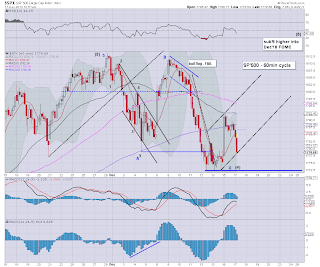 Not the most exciting of mornings, but there continues to be some interesting action in individual stocks.

Interesting conversation between Biderman and Bianco

11.10am.. market trying to punch in a spike-floor at sp'1777...at what is a typical turn time.
Posted by Trading Sunset at 15:53:00
Email ThisBlogThis!Share to TwitterShare to FacebookShare to Pinterest

Market slips in pre-market, and opens a little weak. Certainly, its nothing for equity bears to get overly excited about. The sp'1772 low will most likely hold today, ahead of the uncertainty about what the Fed might do tomorrow. 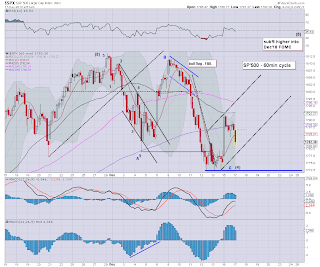 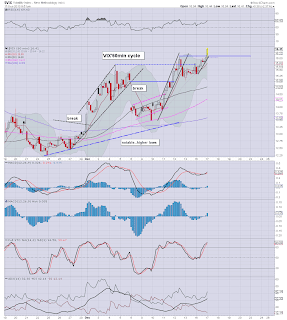 *the VIX is higher for a sixth day, and this marks the second series of rather consistent (if minor) gains. As far as I know, the recent 8 day run was itself a record, it'd be a real surprise if we saw further gains across the rest of this week.
--

Baring a break <1772 - which I really don't expect, today and early Wednesday will most likely be a bit of a chop fest. There is little reason why the market will see any significant price moves until the FOMC is out of the way.


10.25am.. weakness in the market..but really, not enough to break 1772. With things like FB and GOOG on the rise...market should hold together into the fed decision tomorrow.
Posted by Trading Sunset at 14:53:00
Email ThisBlogThis!Share to TwitterShare to FacebookShare to Pinterest

Good morning. Futures are a touch higher, sp +2pts, we're set to open at 1788. Precious metals are (not surprisingly) weak, Gold -$6, Silver -0.6%. Despite no sig' QE today, equity bulls should have a fair chance at battling at least moderately higher. 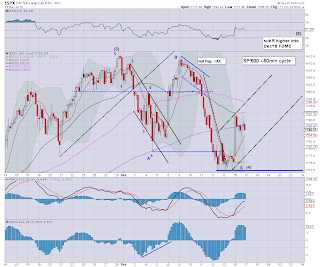 Well, the FOMC meeting begins today, with the annoucement tomorrow at 2pm.

No doubt, the only thing that Mr Market really cares about is a continuation of the 'benny bux' at $85bn a month. Considering next week is Christmas, and Bernanke is half way to the exit door, it simply makes no sense for any policy change until next spring.
--


9.42am.. market testing old resistance...1782.... if bulls fail to hold it..could get interesting.
Posted by Trading Sunset at 13:38:00
Email ThisBlogThis!Share to TwitterShare to FacebookShare to Pinterest

Rough start to the week for the bears

Sunday night futures were just another cruel tease to the equity bears. Hopes of sp'1750s were quickly broken, and now the issue is whether the 1800s will be hit before..or after the FOMC this Wednesday. End year upside looks to be sp'1830/50, with Dow 16300/500. 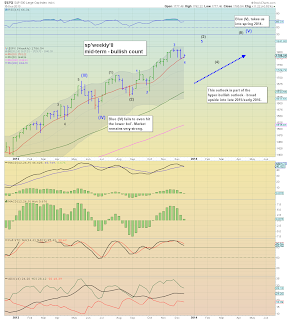 sp'weekly'9 - the next fib retrace 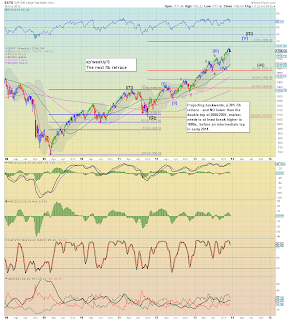 *I remain very unsure as to whether we have seen sub blue 3 (of larger black 3) complete yet.

This remains very much like Feb-April of this year, where the market continually kept seeing micro pull backs, only to relentlessly climb the following week.

Regardless of the day to day noise....the broader trend remains to the upside.
--

Tuesday will see the last CPI data of the year, along with some housing data. No doubt, there will be some chatter that 'if inflation remains low..then no-taper'.


The Schiff at WMT

An interesting little video from Schiff, teasing the WMT shoppers.

Certainly, the average Walmart shopper tends to be fine with the notion of 'higher wages for the poorly paid workers'..except...when the reality of subsequent higher prices comes to mind. Good to see the Schiff outside of the studio :)


Saying what must be said

For many out there, I realise I am becoming one of the more annoying posters out there. After all, I'm not touting the doom that many of you seek to hear. As I've said before though, I ain't playing the game of trying to attract attention by suggesting a collapse wave, for which I no longer believe in.

For those bears with some patience, and perspective on the bigger picture, I will be here..ready...in the late spring. Only then, will it likely be a viable time to start shorting the indexes and being long market volatility.

Indeed, if I'm vaguely correct about the wave count, we should see a somewhat strong down move in late Jan/Feb..only to see the bears get whipsawed again, with a further ramp across March/April.

Just another four or five months to go.

The main indexes closed with some interesting gains, sp+11pts @ 1786. The two leaders - Trans/R2K, closed +0.9% and +1.2% respectively. Once the FOMC is out of the way, the market should be breaking to new historic highs...all the way into mid/late January. 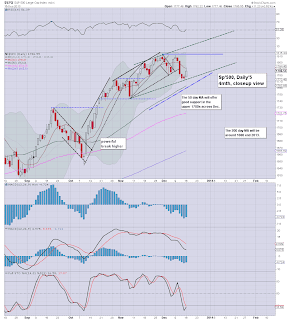 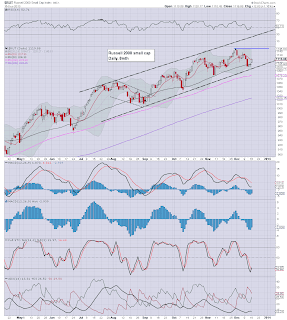 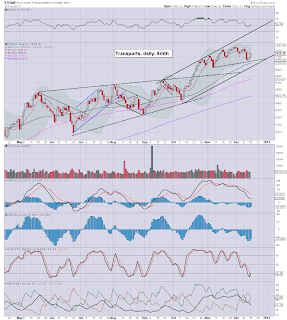 So..a close in the mid sp'1780s, and with the two leaders similarly higher, Mr Market has started the week with a somewhat interesting gain.

Yet, until the FOMC is out of the way, everything will likely remain somewhat choppy.

Unlike last December where Mr Market was increasingly anxious about budgetary issues, this year..there really isn't much to stop another up wave, especially in early January.