Euro set to drop...like a brick

Whilst we have a sleepy Sunday, I'll take the chance to update the Euro/$ charts. We have a clear bear flag - as seen on both the daily and weekly cycles, and that looks set to be confirmed with a sharp move lower  this week. 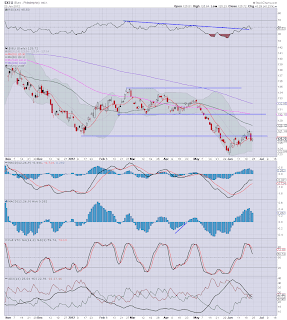 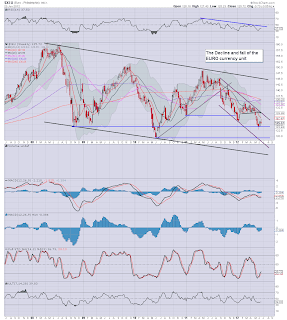 My 1.28 target from last week was just about hit, and it was in sync with both the peak in equities and the FOMC announcement.

First downside target is a break of the recent low of 1.2288. Once that fails to hold, primary target for this cycle is 1.20/19. Its possible - if the market gets concerned about the integrity of the EU, we'll see a fast move that likely floors around 1.17/15. I do not see <1.15 at least until the Autumn.

*five hours until the futures wheel spins up. Bears should again recognise that Thursday opened moderately higher. So, even if we see (somehow) see dow +50/75 this Sunday night, bears should not get too moody. The bigger cycles ALL say we're going down.