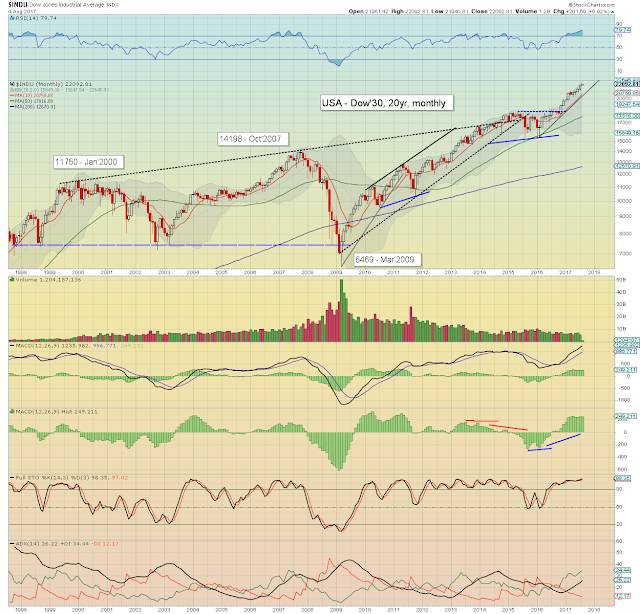 Best guess: a touch of weakness in the near term, but climbing into September. A 5% retrace seems probable within Sept-Oct, but then resuming powerfully upward into year end, and all the way into late spring 2018, at which point the Dow could be as high as 25/26k.

Equity bears have nothing to tout unless a break and monthly close under the 10MA, which is currently in the 20700s, and will be around 22k by year end. 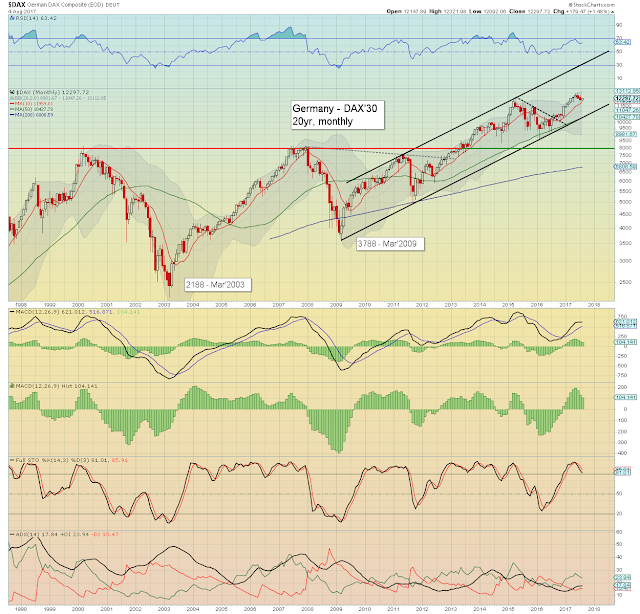 The economic powerhouse of the EU - Germany, saw its market decline for a second month, -206pts (1.7%) to 12118. The mid term trend from Feb'2016 remains intact. Things would turn 'interestingly bearish' with any monthly close under the 10MA, which is currently just a touch lower in the 11900s.

Special note: for the wave counters out there, the DAX has an exceptionally clean 5 wave count from the 2009 low. Its highly notable that old 8k resistance is now core support. Even with a serious geo-political upset or a recession, its difficult to see the DAX ever being allowed (not least by the ECB) to sustainably trade under 8k again. 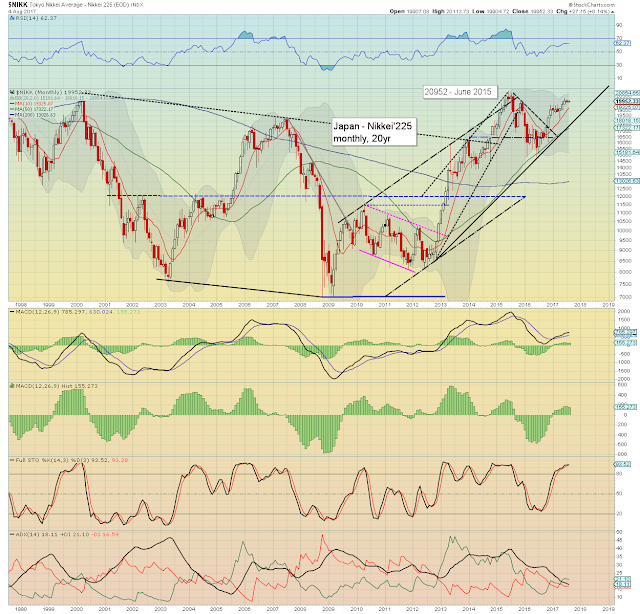 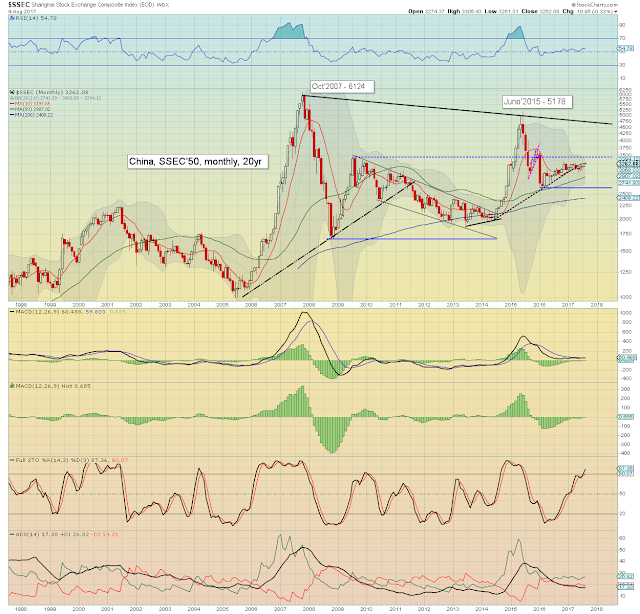 The Chinese market settled higher for a second month, +80pts (2.5%) to 3273. First soft upside target is the upper monthly bollinger, currently around 3400. A break >3500 would offer far higher levels to the giant 5k threshold, close to the 2015 high of 5178. Things would only turn bearish with a monthly close <3k. 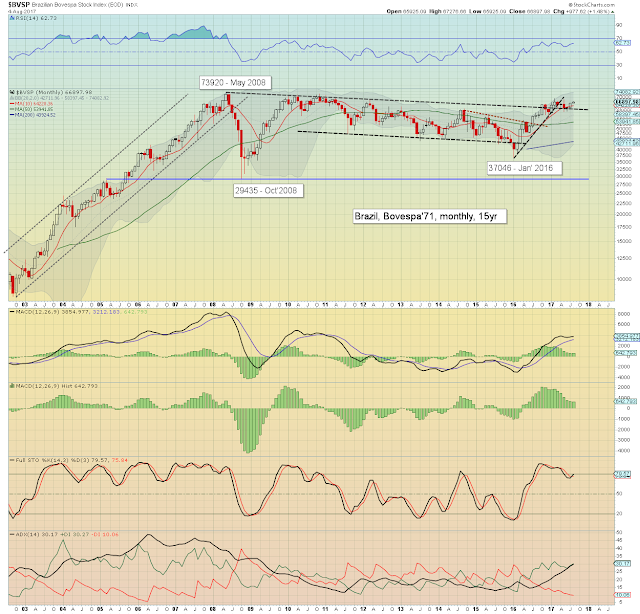 The Brazilian market saw a strong July, +3020pts (4.8%) to 65920, an impressive performance considering simmering political issues. The Feb' high of 69487 is first soft target, and is well within range before year end. The historic high of 73920 from May 2008 is a very valid grander target, not least if commodity prices can at least moderately climb into year end. 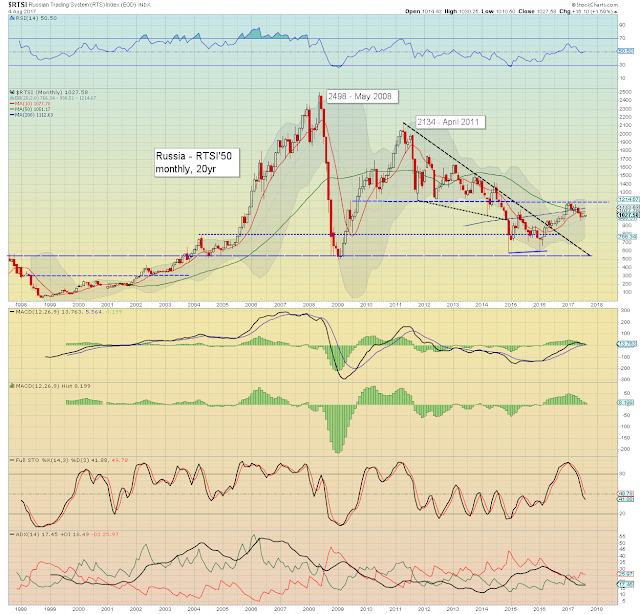 Russian equities saw a choppy month, +8pts (0.9%) to 1011. The 1200 threshold remains critical. If it can be closed above, it will offer far higher levels to the 1500/1700s by spring 2018. The Russian market really needs commodities (especially oil and nat' gas) at least somewhat higher. 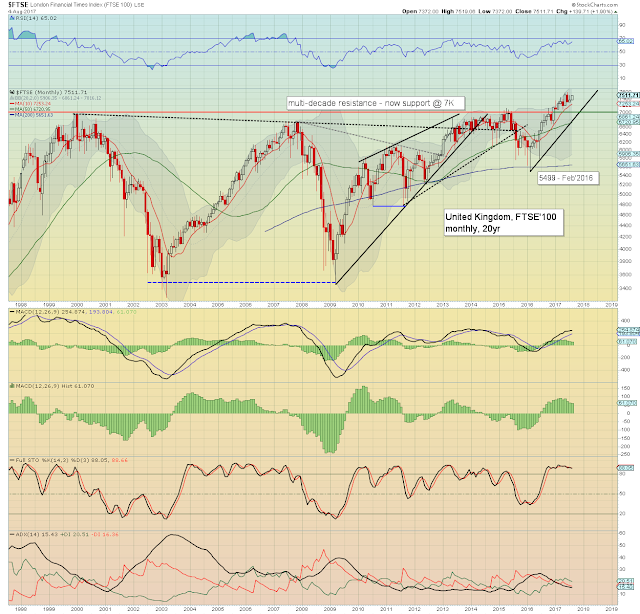 It was a somewhat messy month for UK equities, settling +59pts (0.8%) to 7372. August has begun on a positive note, with new historic highs seemingly probable by mid/late September. The 8000s look highly probable before year end. It is somewhat amusing that the mainstream are still too afraid to speculate about the FTSE reaching 10k within the current up wave that began in Feb'2016.

Its notable that the UK economy is somewhat struggling, as inflation has picked up, itself a direct result of BREXIT, which saw very significant depreciation of the GBP. The UK has always been prone to inflation, and worse case.. the next recession will be mixed with inflation... the infamous 'stagflation'. 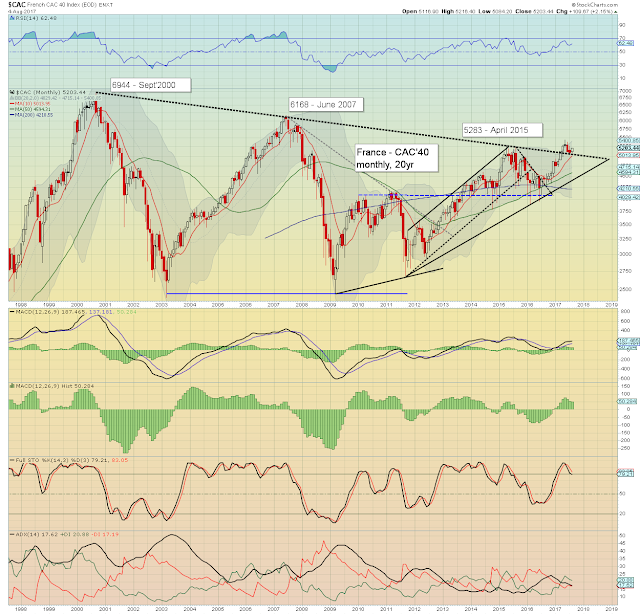 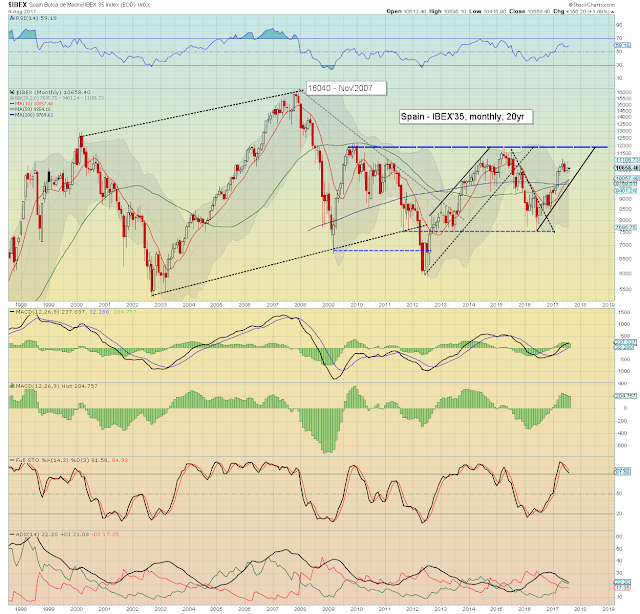 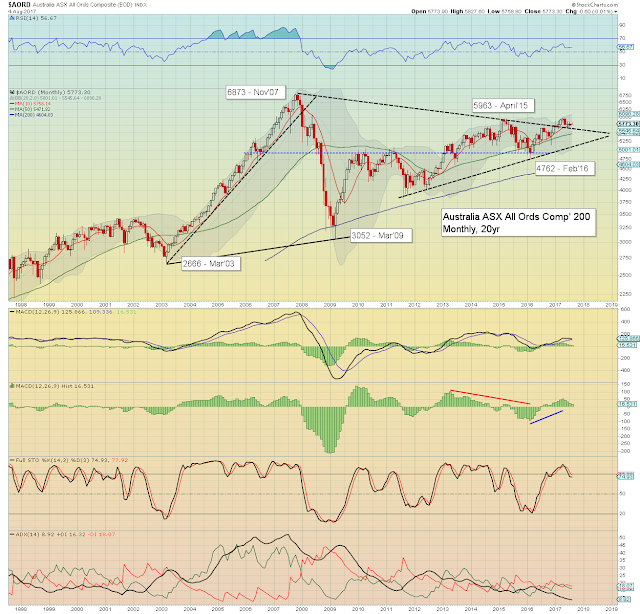 The Australian market saw a second month of micro chop, settling +9pts (0.2%) to 5773. August has opened with similar narrow narrow range price action, with broader price structure of a bull flag, that offers further upside to challenge the Nov'2007 historic high of 6873. Much like the BRICs, Australia is highly dependent upon commodity prices, which have only just started to pick up. A monthly close for copper >$3.00 would be one key aspect, that would give confidence to further upside into 2018.
--

All world equity markets remain within their mid term upward trends that stretch back to early 2016.

The USA, Germany, and the UK, are leading the way higher, with Russia lagging.

Many markets have price structure of a multi-month bull flag, that offers further upside of around 10% into year end.
--

Notable earnings due from DIS, JD, BABA, SNAP, and APRN.

*there are a fair few fed officials on the loose, notably Bullard (Monday).
--