US equities confirmed last weeks spike floor candle, with most indexes climbing around 2.3%. Next week looks bullish, with viable upside across March, to sp'1880/1920. There is a significant probability that the US - and many World indexes, will conclude the Oct'2011 wave, by late March/early April. 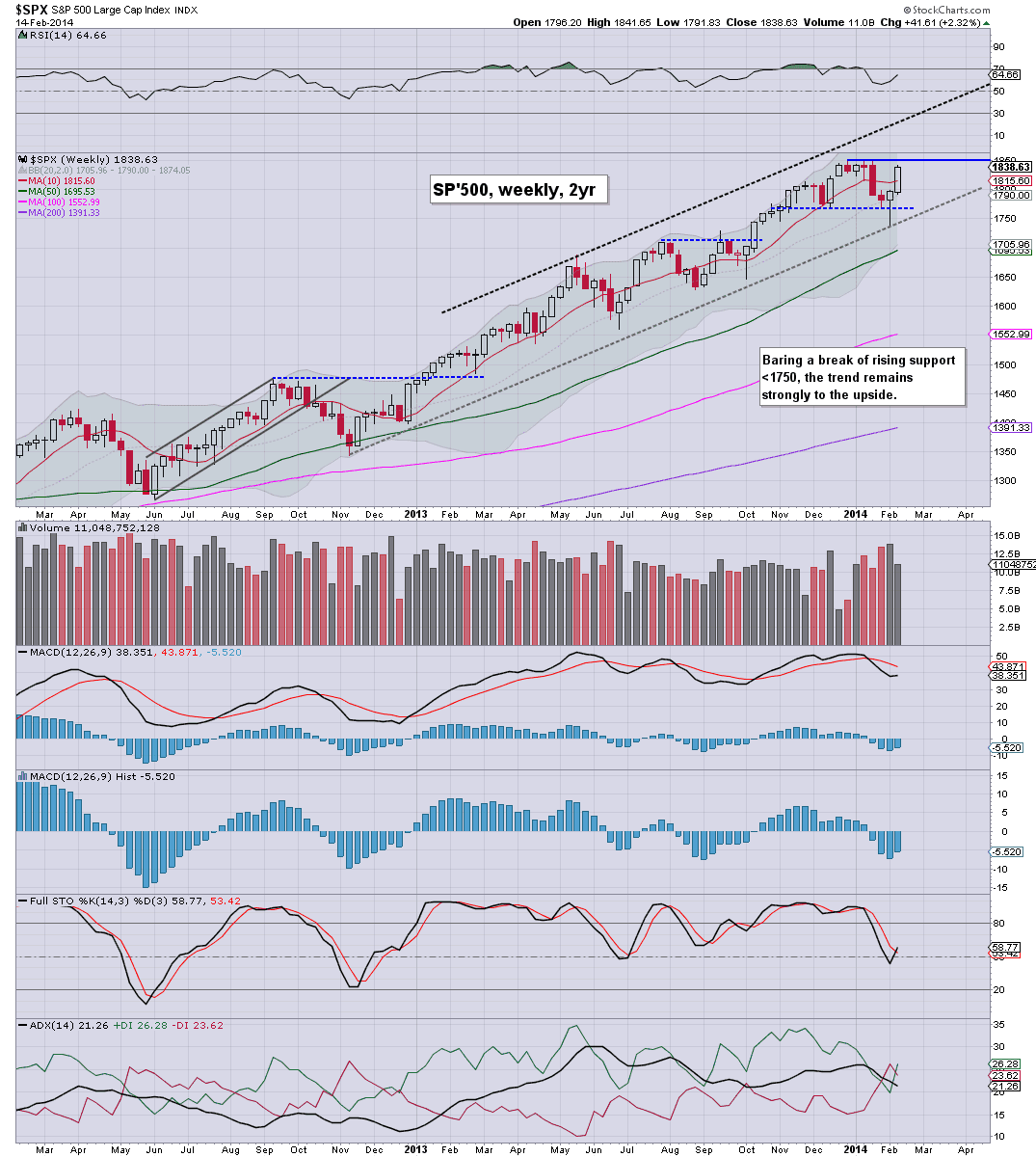 The sp' saw net weekly gains of a significant 2.3%. This weeks candle was pretty strong, and confirms the spike-floor from last week. A break to new historic highs, will fully confirm further upside into mid/late March.

Upper bol' on the weekly is offering 1874, and by mid March, that will probably be in the 1890/1910 area. It is probably useful to keep in mind that the even more important monthly charts are already offering 1901, and that will jump to 1925/50 when March begins. 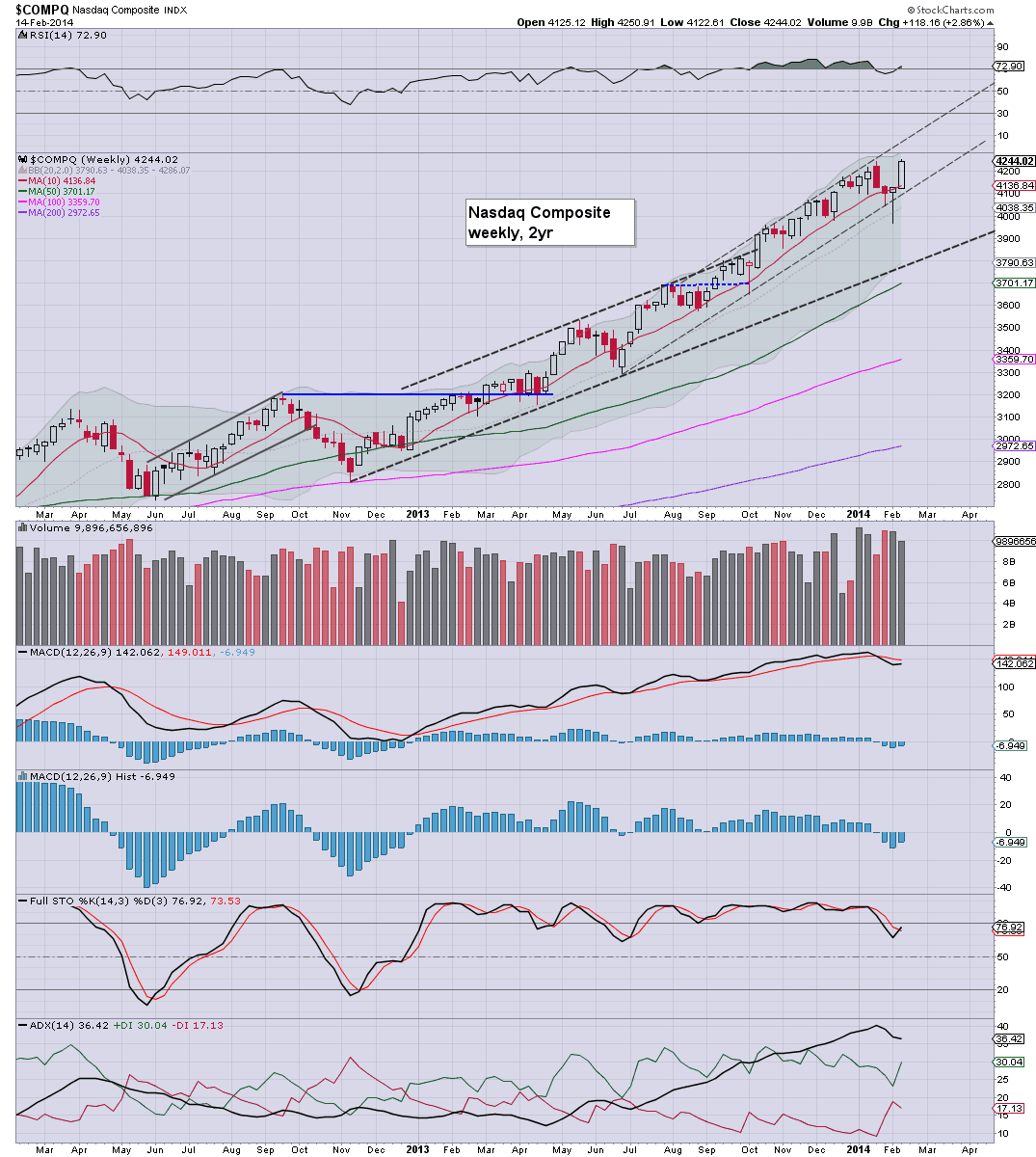 The tech' has already marginally broken the January high, and we're set for the 4300/4400s in March. Underlying MACD cycle is due to turn positive again in about 1-2 weeks. 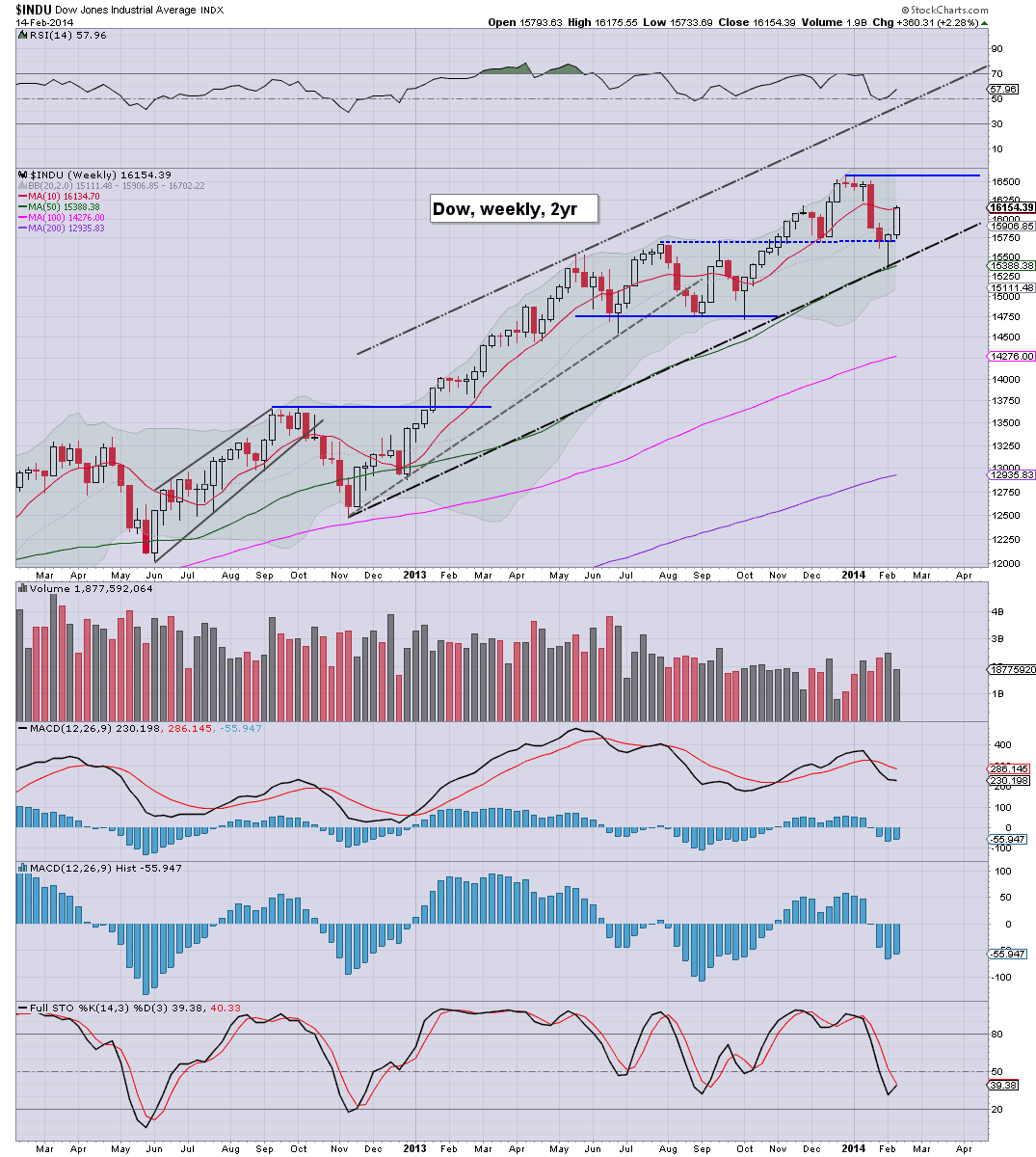 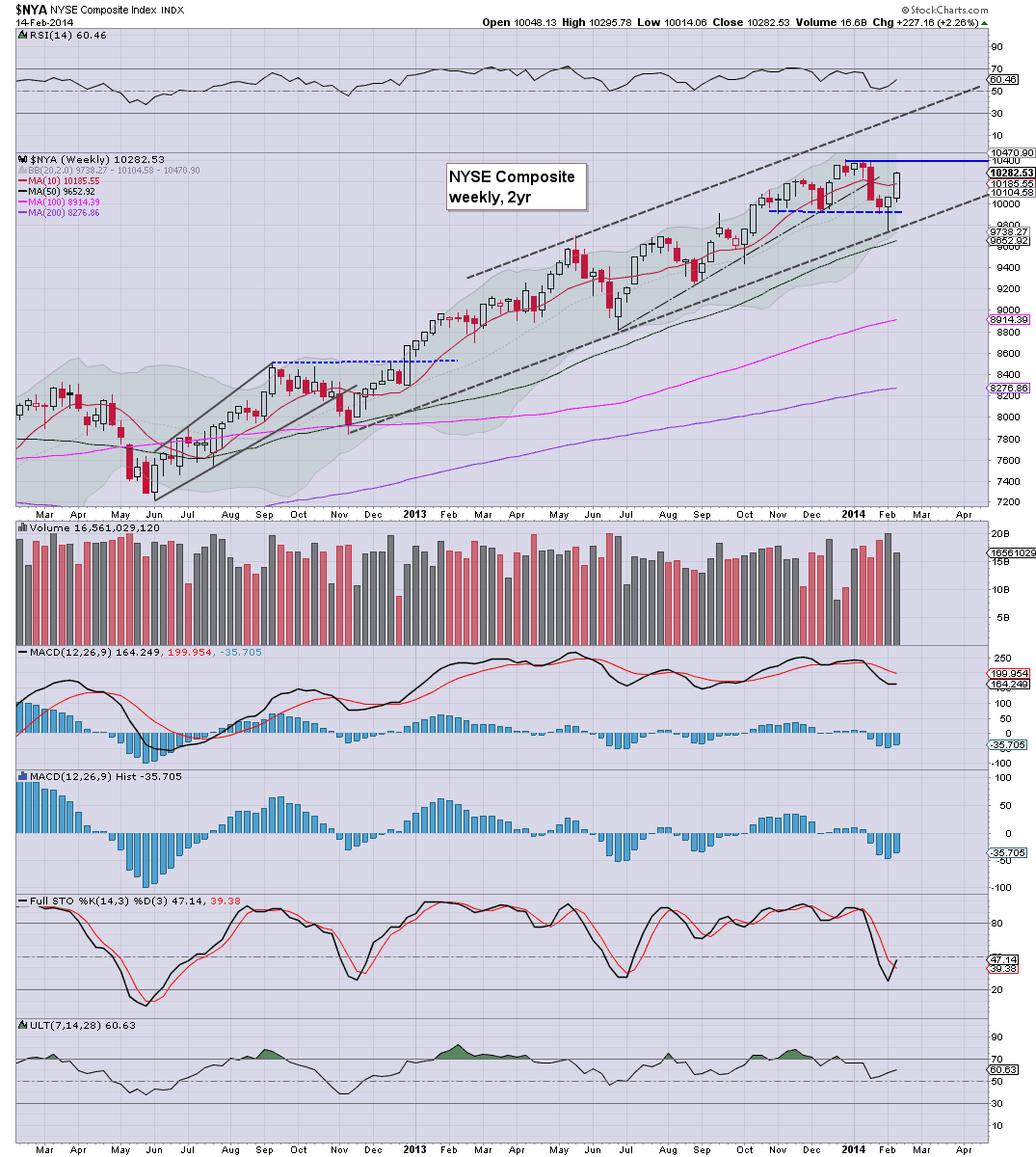 The master index looks very similar to the Dow. Upside to 10500/750 by late March. The 11000s now look slightly out of reach in the current multi-month ramp. 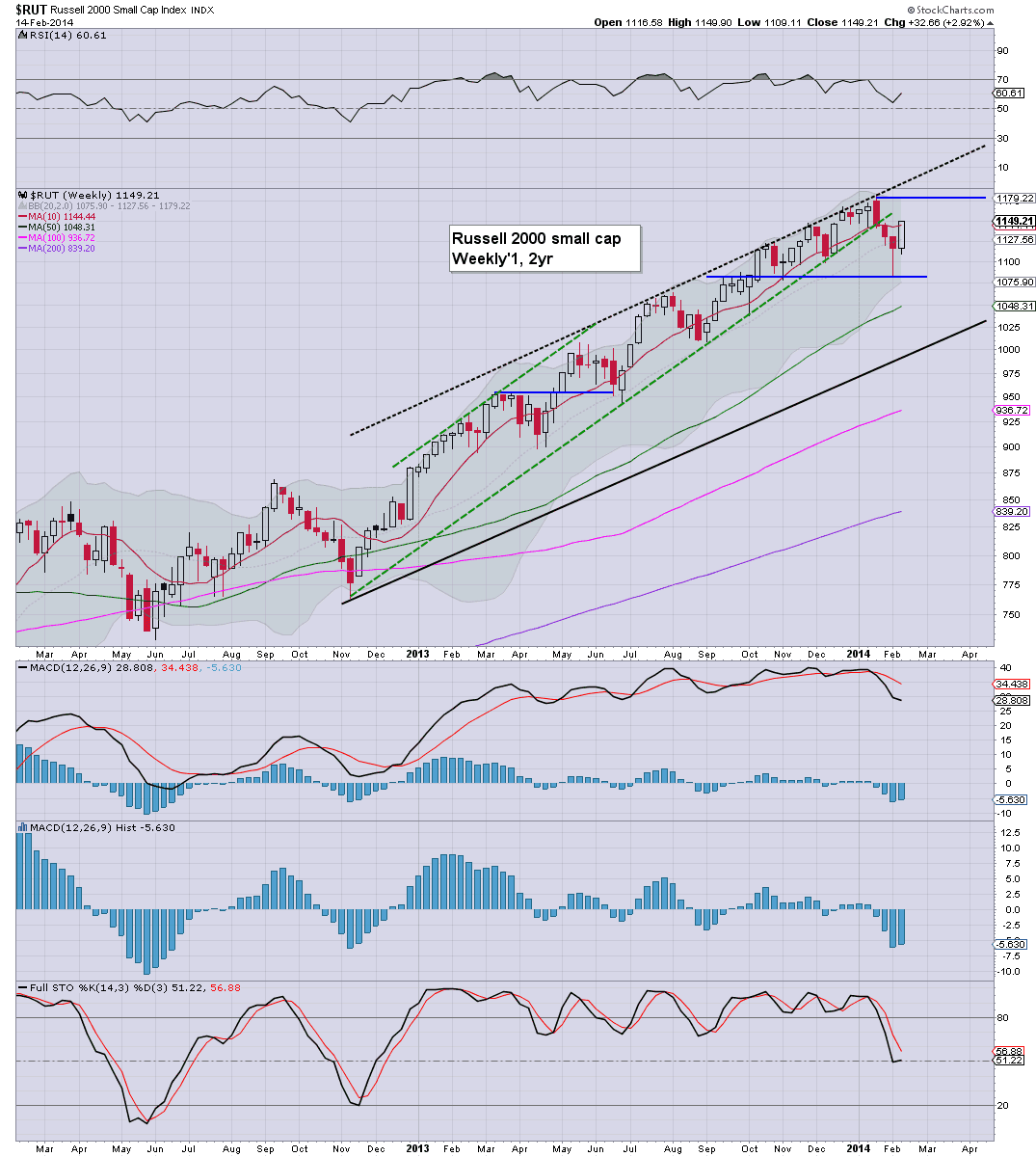 The second market leader, the R2k, closed a very significant 2.9% higher, with an important weekly close above the 10MA of 1144. The 1200s look likely, but the 1300s now look too high to reach this spring. 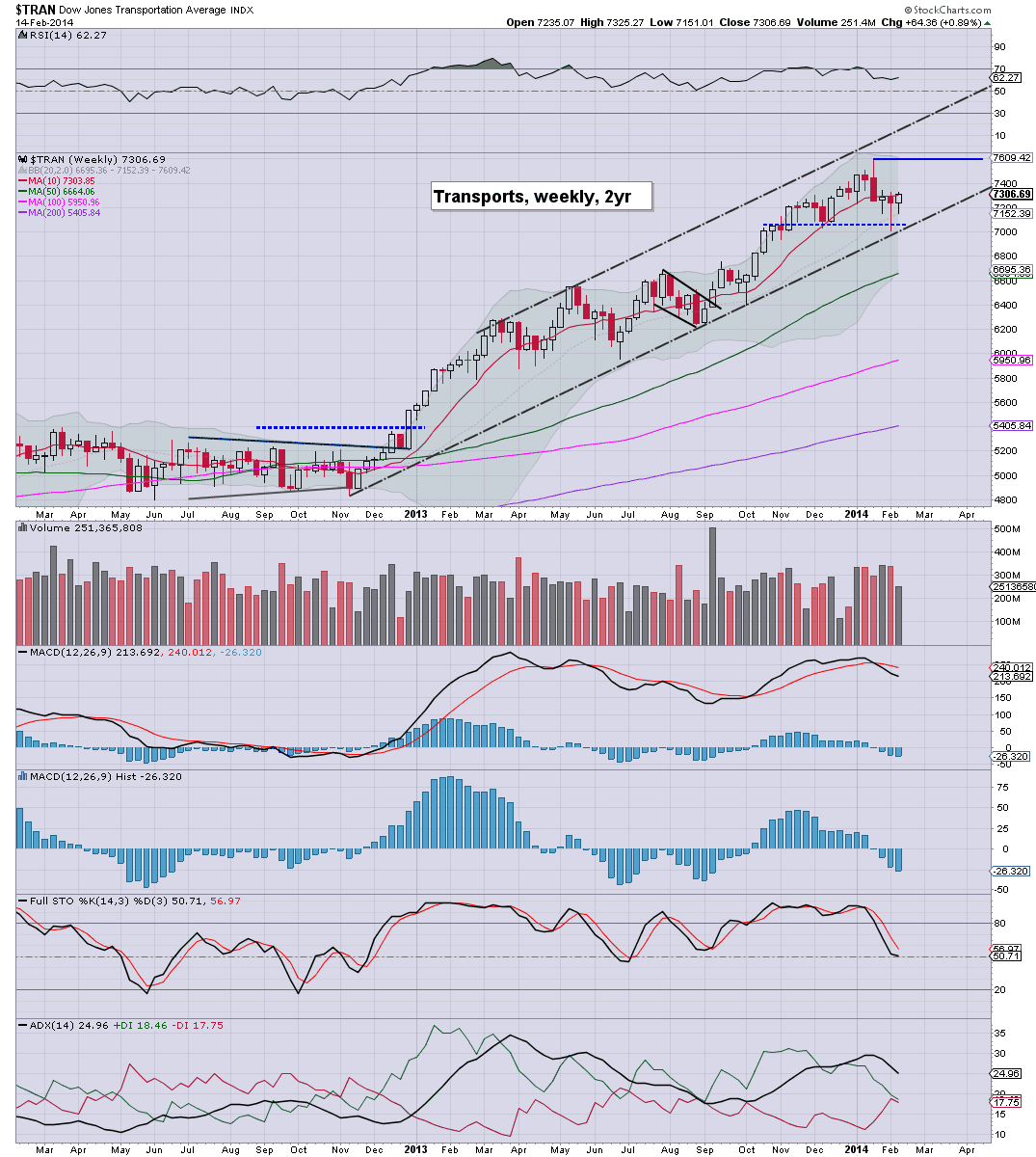 The old leader - Trans, is lagging, with a net weekly gain of just 0.9%. However, we now have 3 consecutive weekly candles, each with reasonable spike-floors. Upside looks to be 7700/7800 by late March. The 8000s, appear out of range.

More important than anything, we have weekly candles that confirm last weeks spike-floor. There is a very high likelihood that we will see another 2-3 up candles, before we might get stuck again.

I'm highly suspicious that the FOMC of March'19 could be another key market turn. It is now pretty safe to assume that the Fed will announce taper'3, where monthly QE will be reduced to 'only' $55bn a month - which of course is still a huge annualised total of $650bn.

We start the shortened week on Tuesday with Empire state manu' survey, and some housing data.

More importantly, Wed' has housing starts, PPI, and the FOMC minutes. No doubt Mr Market will be curious as to what the Fed officials have been saying. There are also two officials on the loose, and as always, their comments might move the market a little.


Looking forward to the late spring

For the regular readers out there, you can already guess what I'm about to say. Last summer, with the market holding the mid 1500s, I threw in the bearish towel..I waved a giant white flag of capitulation, and I've been waving the white flag for 8 full months.

As I said at the time, 'broad upside into spring 2014'. Well, we're almost there. The next 'big short' opportunity is probably no more than 4-6 weeks away. The following should clarify my broader outlook... 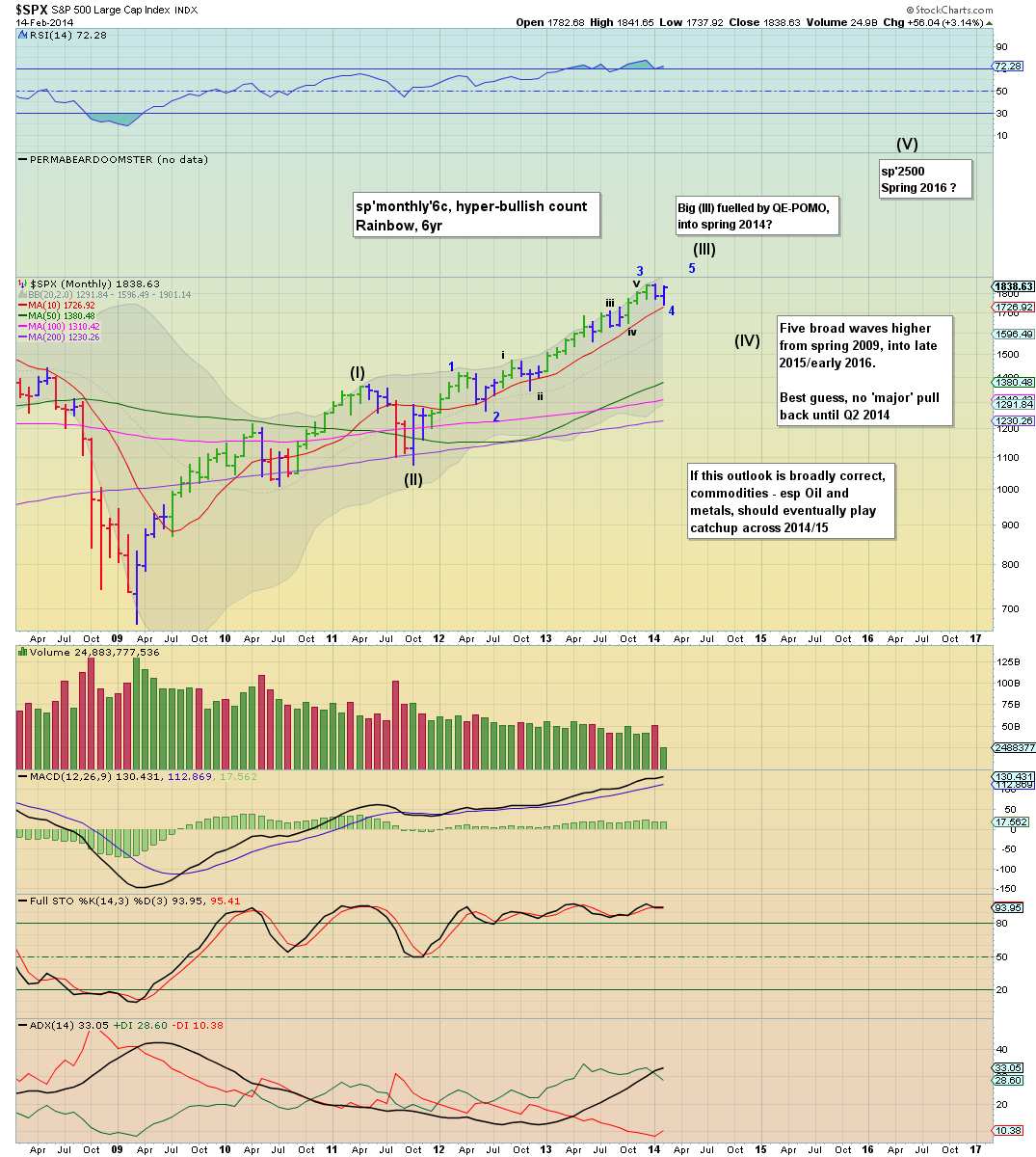 We've already seen some interesting 'little trembles' in market land, with two major daily declines of sp' -38 and -40pts, with the VIX spiking in the 21s - almost breaking last years high. Lets see if the bull maniacs can push this market higher for another month or so, only to get stuck, and then begin the first major decline since summer 2011.

Back at the Tuesday open (although I might post a few sporadic bits and pieces on Monday).
Posted by Trading Sunset at 17:00:00
Email ThisBlogThis!Share to TwitterShare to FacebookShare to Pinterest

With a strong weekly close for the second consecutive week, the equity bulls are in full control. There looks to be at least another few weeks to the upside, probably into the next FOMC of March'19. What happens from there...could be real interesting ;) 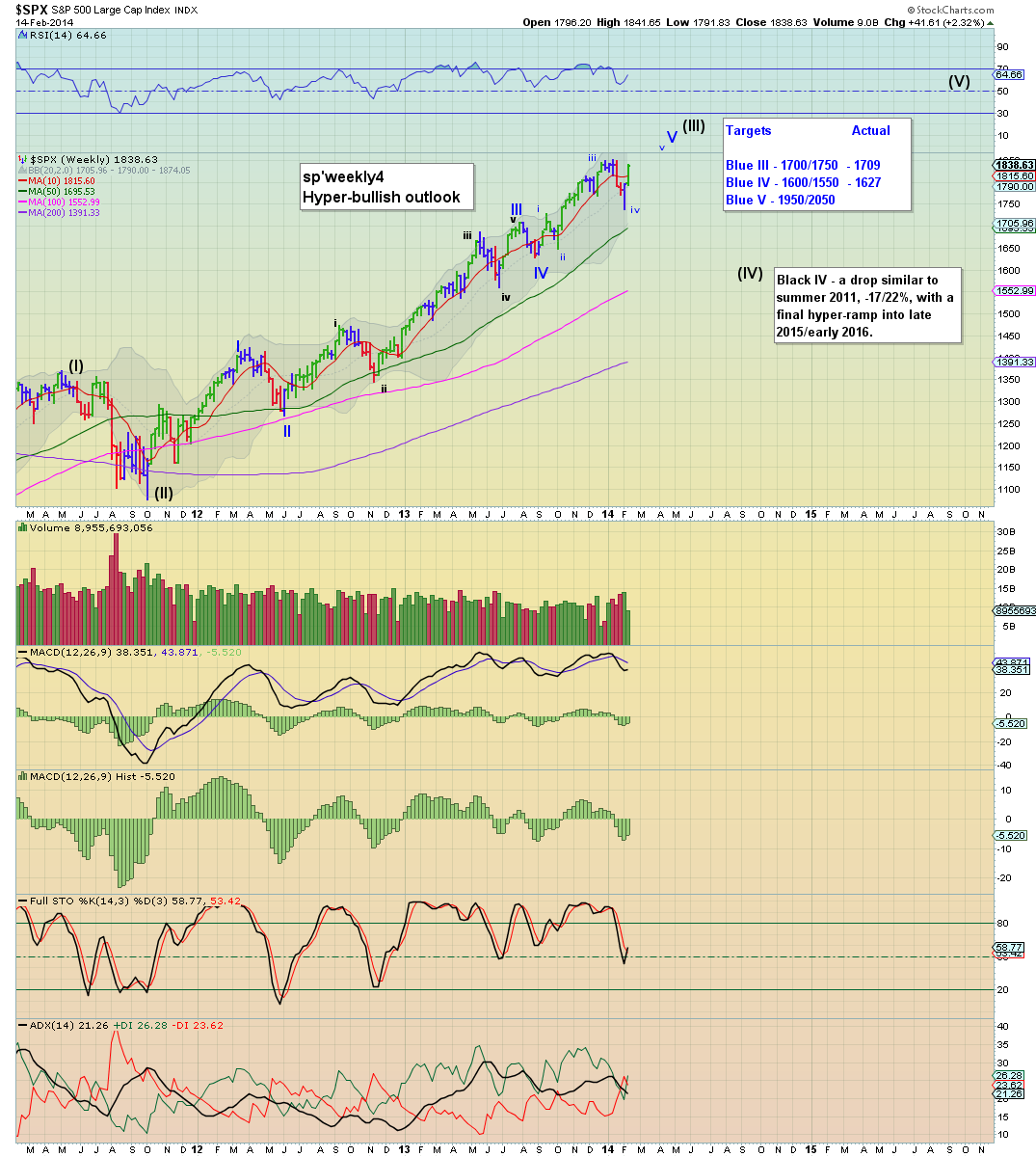 The above outlook is something I have generally been holding to since last summer.

I'm seeking a intermediate'3 top within the next month or two, and then a multi-month wave lower, flooring sometime between August-October. From there..a huge hyper ramp, probably to sp'2300/2500 by late 2015/early 2016.

I realise the latter will be heresy to some of the remaining doomer bears out there, but hey..that is just my 'best guess'. Treat it as you wish.
- 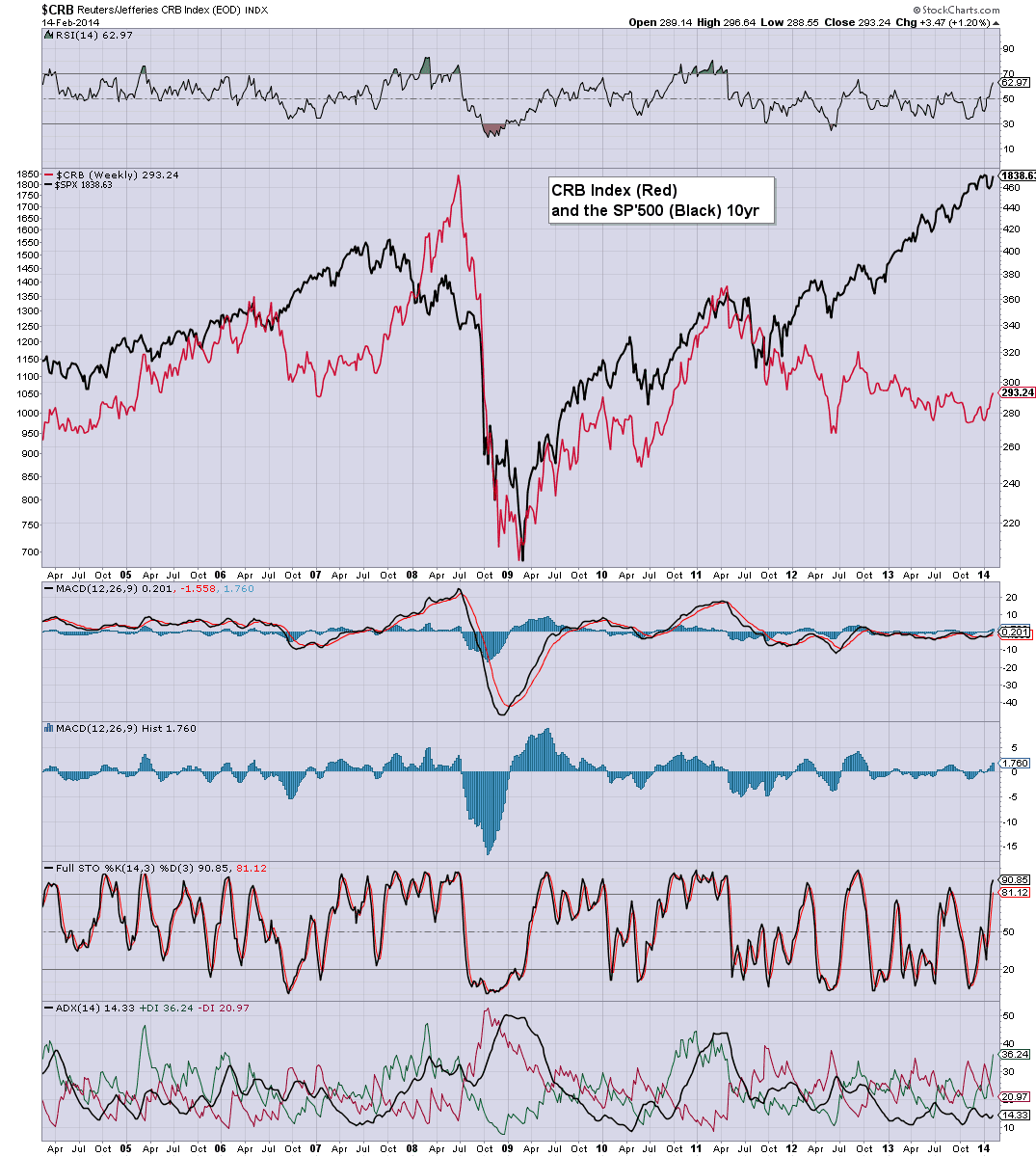 The CRB index gained 1.2% this week, and is getting close to the big 300 level, not seen since Feb'2013. At some point the disparity between the two will largely close. Normally I'd be inclined to look for an inflationary outcome, yet money velocity is low, and is still falling.  Anyway, I thought it was worth highlighting again.

Have a good weekend
--
*the weekend post will be on the US weekly indexes
Posted by Trading Sunset at 04:00:00
Email ThisBlogThis!Share to TwitterShare to FacebookShare to Pinterest

US equities closed the week on a positive note, sp +8pts @ 1838. The two leaders - Trans/R2k, settled higher by 0.3% and 0.1% respectively. Near term outlook is bullish into next week, with a viable Tuesday gap higher - straight to new historic highs, in the 1850s 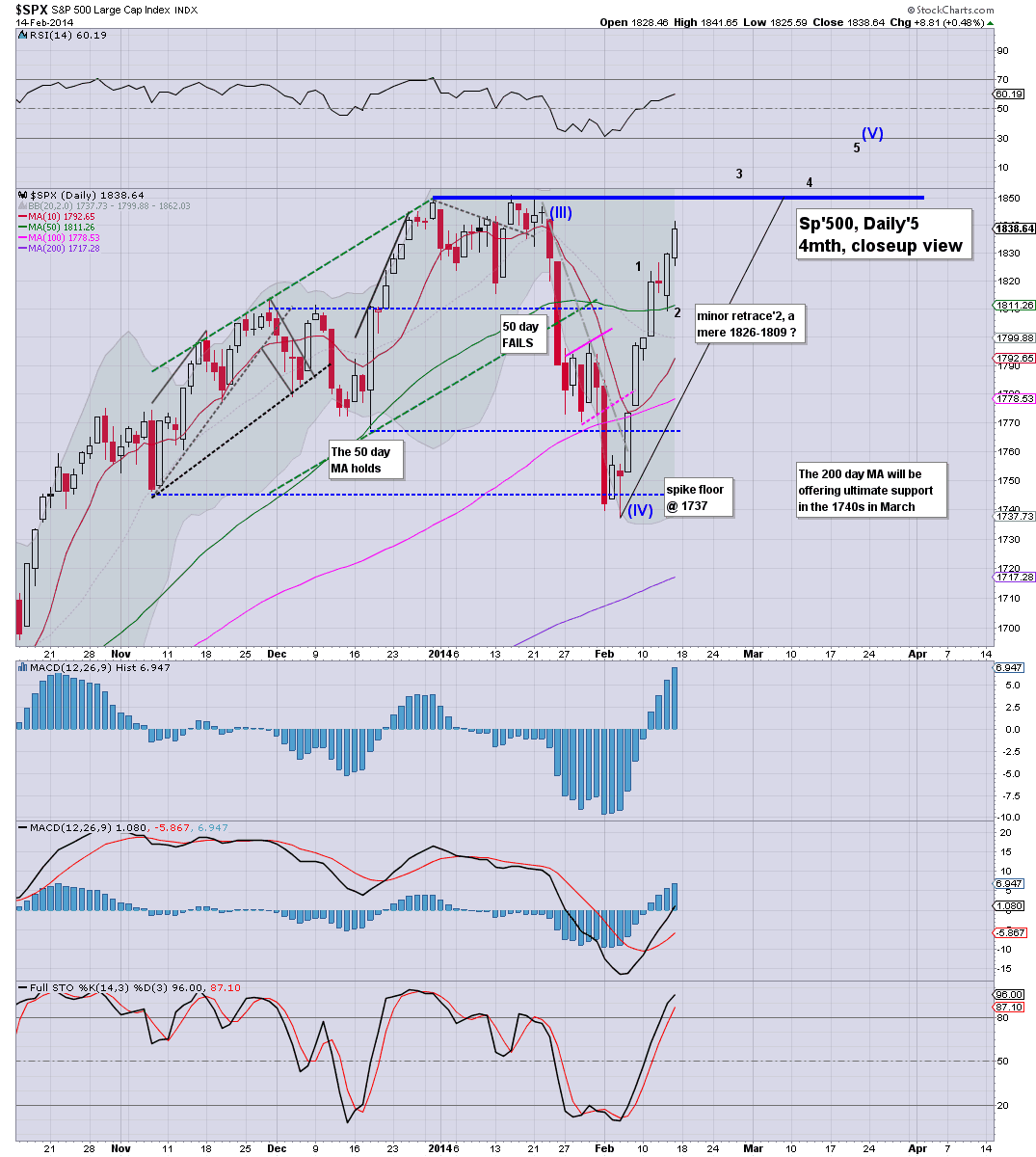 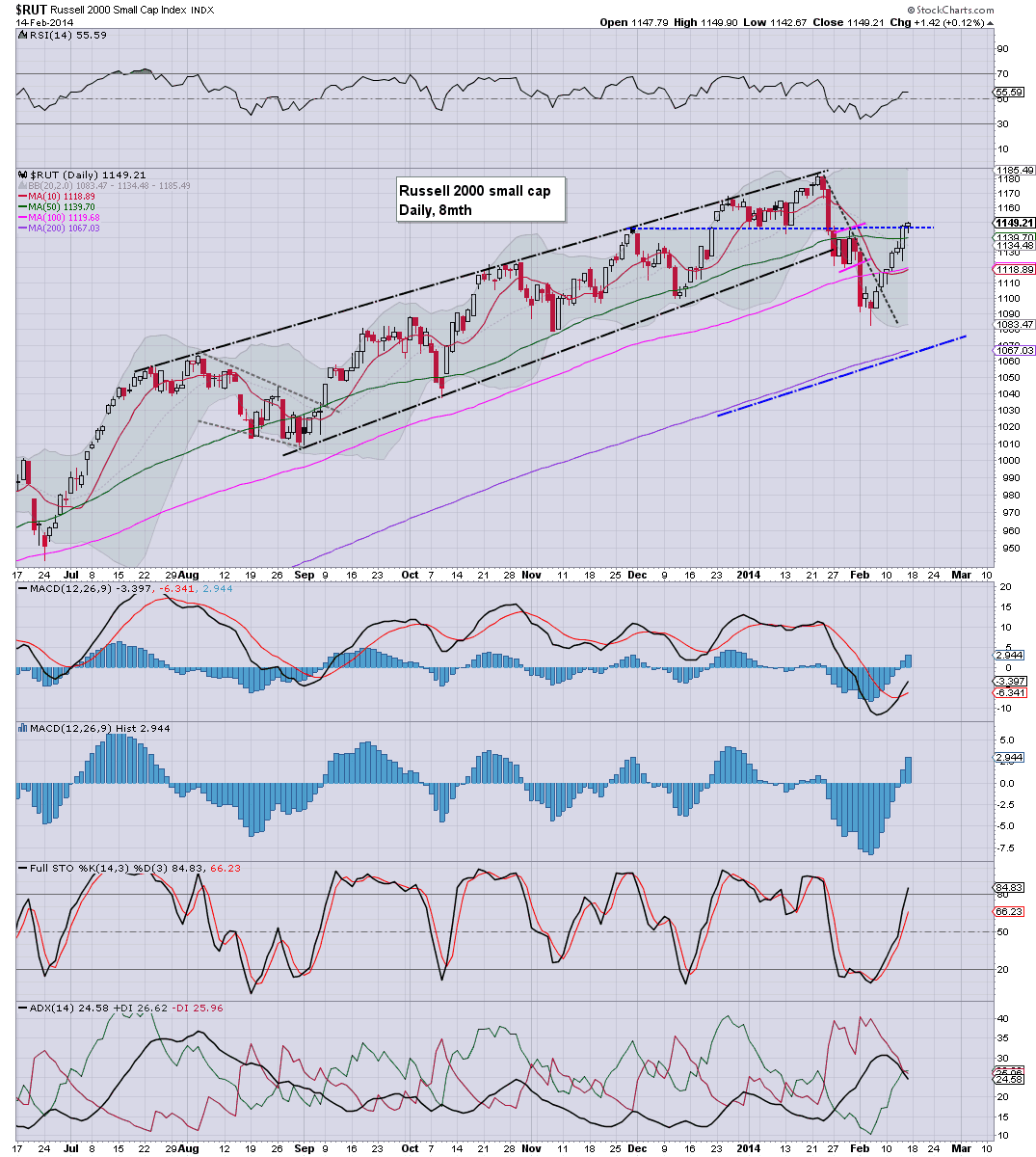 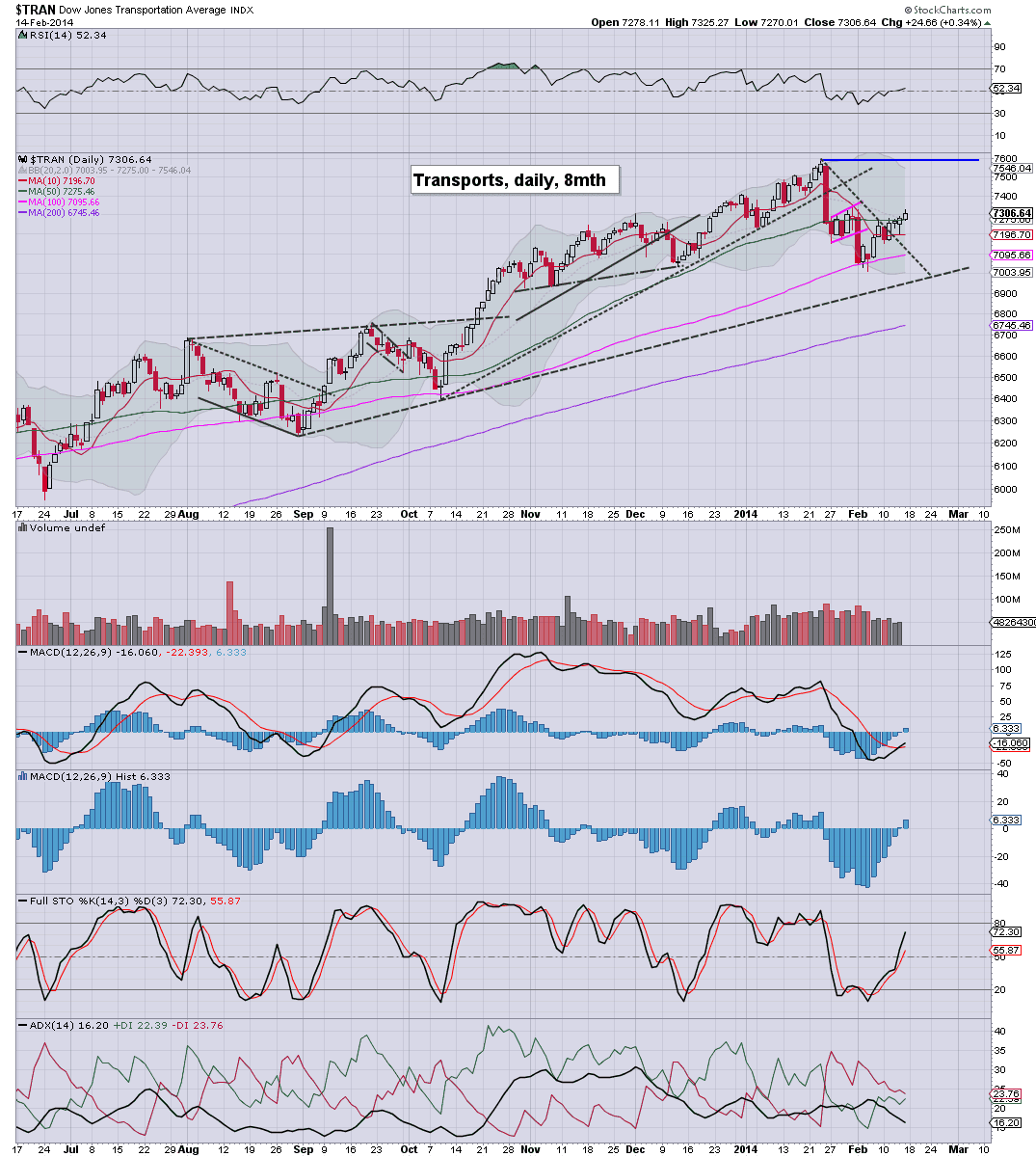 It really has been an especially powerful move of over 5%, across the last 8 trading days.

Suffice to say...I'm holding to the original outlook, broad upside into the spring.