It was a somewhat mixed week for the US equity market, with net weekly changes ranging from -0.8% (Trans), +0.1% (Nasdaq comp'), to +1.0% (Dow). Near term outlook offers another push higher of at least 1-2%. If the energy sector starts to participate, then the US market will continue to broadly climb into late April/early May. 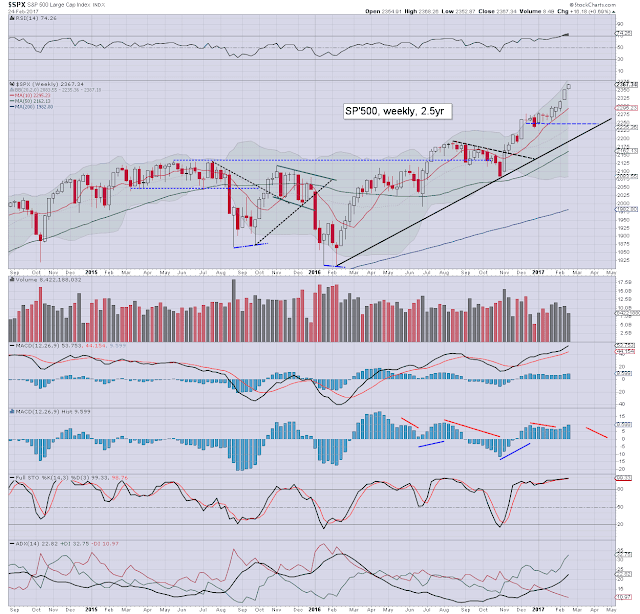 Best guess: further upside to around 2400. There will be high threat of a 5% retrace across March/April. Rising trend will be around 2250 in early April, and thus no price action in the low 2200s can be expected this spring/summer.

If the energy sector joins the 'main market party', then there will be no retrace until at least May, and by then, the market will be pushing for the 2500s. 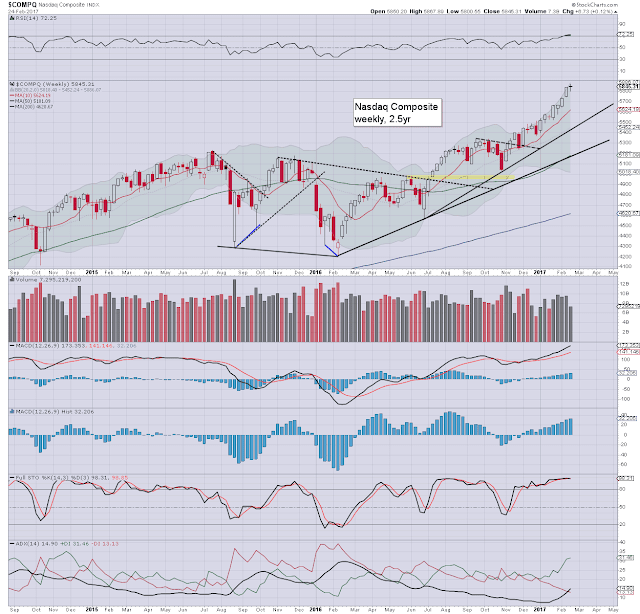 The tech saw a fractional net weekly gain of 6pts (0.1%), settling at 5845, with a notable new historic high of 5867. First rising trend will be around 5600 in early April, with the 10MA offering support in the 5700s in early March. Core support is at the giant 5k threshold, and frankly, that looks secure for the rest of the year. Talk of 7000s by year end should have already begun. 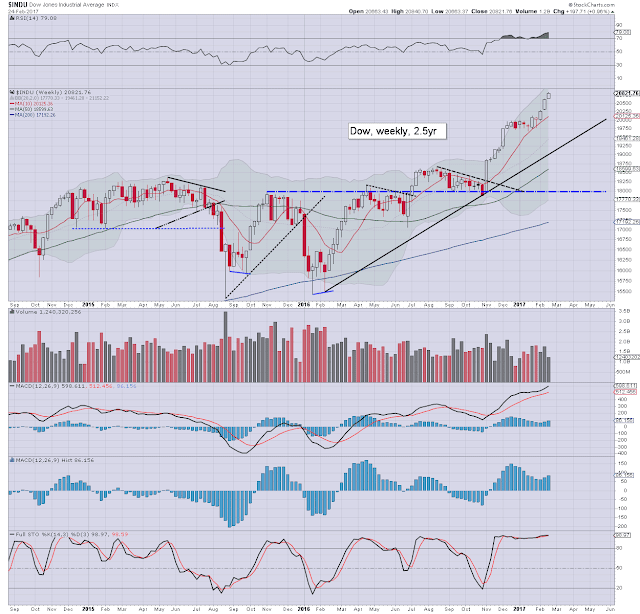 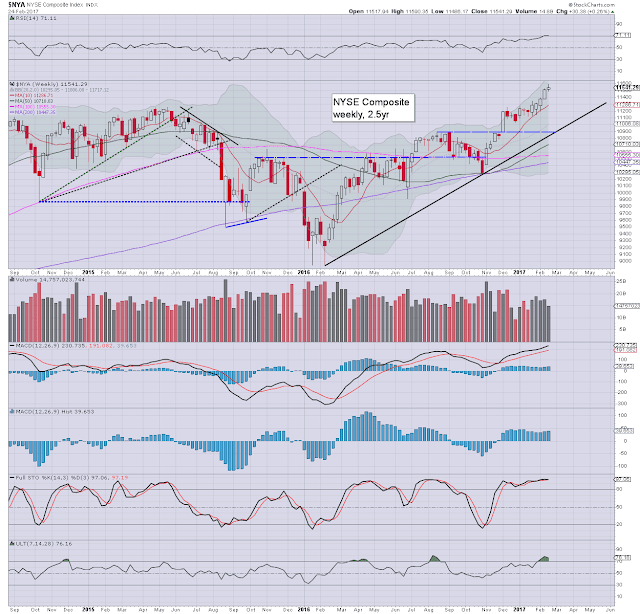 The master index saw a moderate net weekly gain of 0.3%, but also managed a new historic high of 11590. The upper weekly bollinger is already offering the 11700s, with the 12000s seemingly now viable by late April/May. Things only turn provisionally bearish if the NYSE comp' is under 11k. 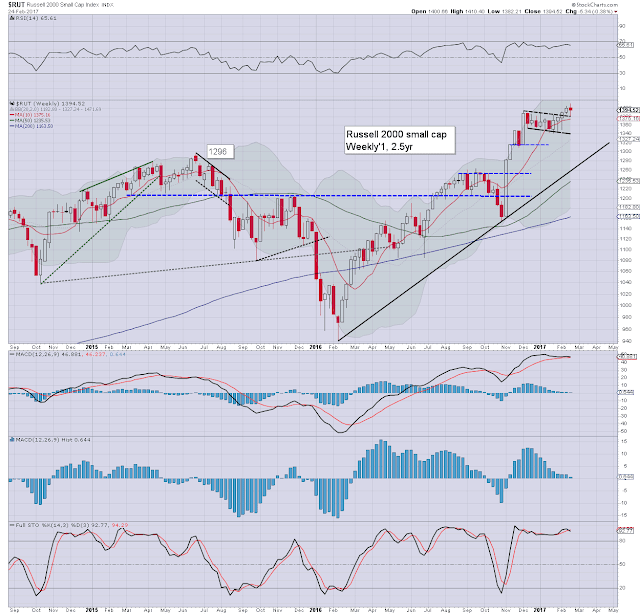 The second market leader - R2K, saw a net weekly decline of -0.4%, but there was still a new historic high of 1410. Its notable the upper bollinger is offering the 1470s, and that will increase to the 1500s by mid March. Things only turn provisionally bearish with price action under the 1300 threshold. 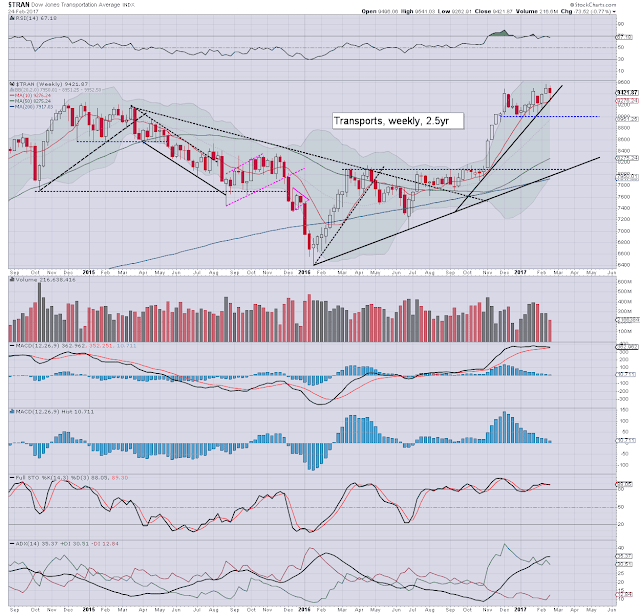 The 'old leader' - Transports, was the laggard this week, with a net weekly decline of -0.8%. The tranny was the only index that didn't break a new historic high this week. Of course, one net weekly decline doesn't negate the broader trend, which is unquestionably still very bullish. Upper weekly bollinger will be offering the giant 10k level in March... which if achieved, would be a massive achievement for the equity bulls, with the Trans having climbed from a March 2009 low of 2134.
--

The US market continues to broadly climb, with the Dow now leading the way higher.

The market could fall 2-3%, and that would only test the (still rising) weekly 10MAs.

Equity bears have nothing to tout unless the Nov2016 lows are taken out. Other world markets (most are mid term bullish), are highly suggestive there will be no retrace in the US market until at least May.
--

*President Trump will present the 'State of the Union' address in the evening. That will be an immensely important event, not just for the US.. but the world. The speech should at least raise the issues of infrastructure and tax policy/regulations, which the market will extremely interested in.

*there are a considerable number of fed officials on the loose, notably Bullard (Tues' evening), and Yellen (Fri', 1pm).

**It is highly likely that SNAP will be listed in the latter half of the week. That will naturally garner a lot of media/market attention, and it'll be important for the equity bulls to see that IPO proceed smoothly.
--

For those with an interest in the gold miners and precious metals, I have something new to offer.


--
As ever, if you value these posts, then subscribe to me!

*the next post on this page will appear Monday at 7pm EST
Posted by Trading Sunset at 17:00:00
Email ThisBlogThis!Share to TwitterShare to FacebookShare to Pinterest 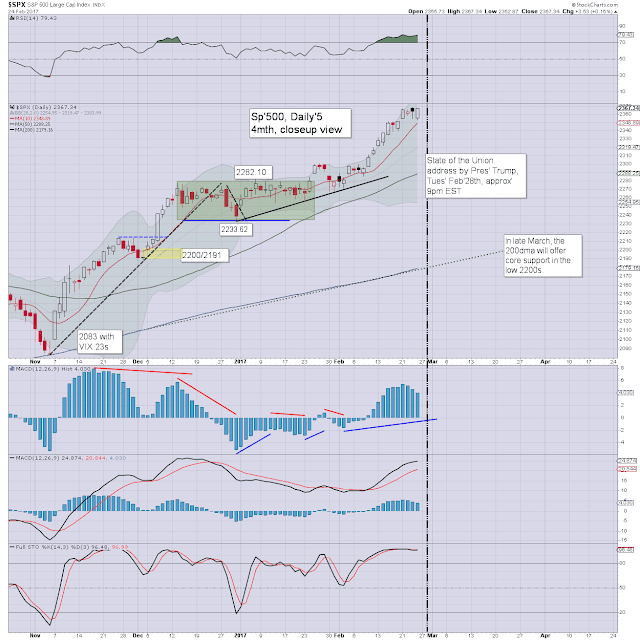 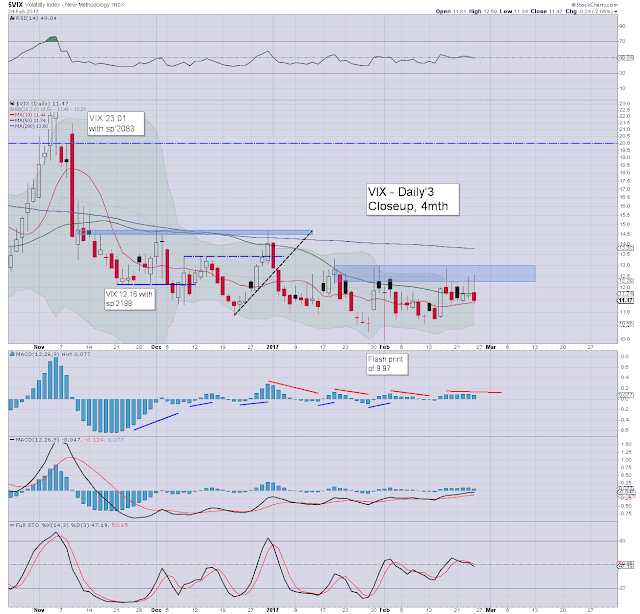 The US market opened moderately lower, but sp'2352 - with VIX 12.59, was all the equity bears could manage. The daily close was actually pretty bullish, as the Dow managed to close net higher for an eleventh consecutive day.

The week as a whole was unquestionably bullish, with 5 of the 6 main indexes breaking new historic highs. Only the Transports was leaning weak.
-- 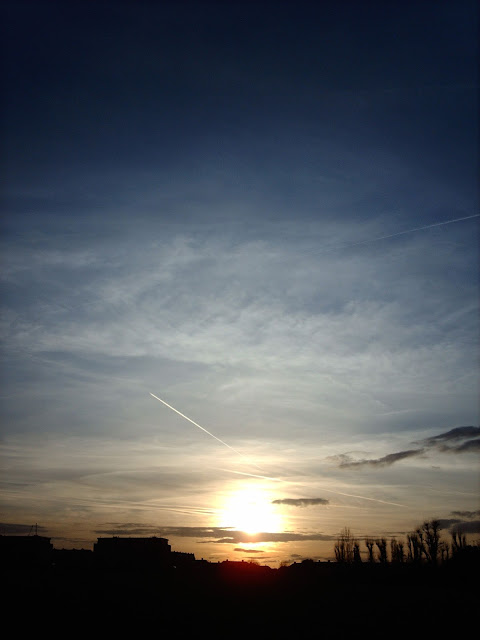 For London city, it was a sunny end to the week, and a pleasant improvement after yesterday's winter storm 'Doris'.

The same is true for the equity market.. the sun is still shining in equity bull land. Sure, a basic retrace of around 5% will be a threat from early March onward. However, energy is a serious threat to any such cooling, as the sector is overdue another push higher. Clearly, oil/nat' gas prices are going to be a key variable in that regard. Will the market start to price in 'summer driving season' soon? Is that going to be the excuse for a continued straight up rally across March, and much of April?

Goodnight from London
--
*the weekend post will appear Saturday at 12pm EST, and will detail the US weekly indexes
Posted by Trading Sunset at 00:00:00
Email ThisBlogThis!Share to TwitterShare to FacebookShare to Pinterest
Newer Posts Older Posts Home
Subscribe to: Posts (Atom)