The US equity markets were broadly unchanged on the week. New highs were seen for many indexes, but the two day decline was important to recognise as the first real consistent downside action since late December. Primary trend remains upward, but upside momentum is lessening.

Its time for another update on the six main US indexes, although I'm also going to cover the issue of deflation. Lets go! 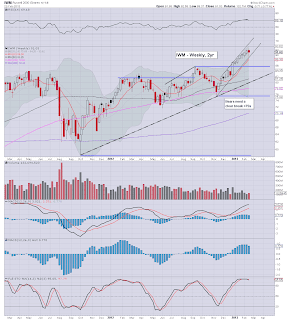 A slight drop of 0.7% for the R2K. Arguably, a bounce off rising support.  Most noticeable, IWM - and the Transports, have exceptionally narrow candles, far more stable than other indexes..and they remain the markets leader indexes.

We have an initial rollover on the MACD (blue bar histogram) cycle, but its nothing for the bears to get excited about..yet. Only if we break <88, could the bears consider a major down wave underway. 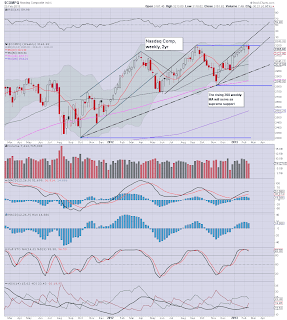 The laggy tech sector slipped almost 1% this week. Initial signs of a rollover on the MACD, but it remains nothing significant yet. Without question, the bears need to break below 3000 again..but that's a good 5% lower. 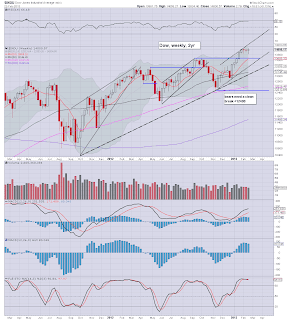 The mighty Dow actually managed a fractional gain this week, although we can still see a little rollover on the MACD cycle. 14k continues to be a key resistance level, and this is the fourth week stuck here.

Bears need to break <13600 to have any hope of major downside into the spring. 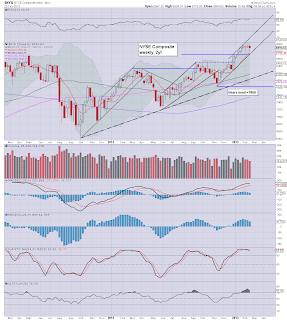 The master index slipped barely 0.5%. Its looking a little flat-toppy, but really, there is nothing significantly bearish here either. 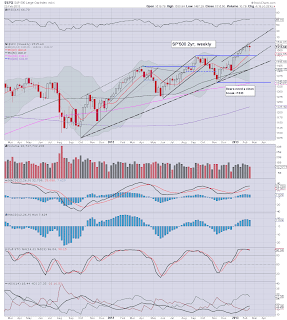 The all important sp'500 broke another new post 2009 high this Tuesday, only to see that somewhat sharp 2 day reversal to 1497...yet the Friday close was pretty bullish.

Like the other indexes, we do have the first sign of a rollover on the MACD cycle.

Bears need a weekly close <1475 to break key rising support. If that is achieved..then its game on. The provisional target would then be the lower bollinger..currently @ 1350 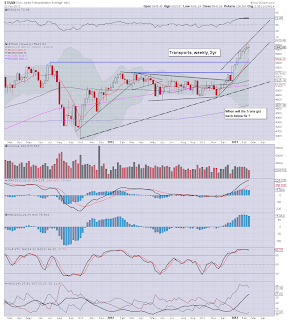 The old leader closed effectively flat on the week  Its important to note it did manage to break the psy' level of 6000. We have a rollover on the MACD cycle, but until we are back <5600, the bears are facing an extremely powerful up trend.

Without question, the two day decline of Wed-Thursday was the highlight of the week. It was the first decent downside action we've seen since late December. Eight weeks..and we get two days..only to be followed by a lousy Friday of algo-bot melt.

I am trying to be (bearishly) hopeful for next week, but as we've just seen, any declines in this market are usually met with equally strong bounces.

I thought it'd also be useful to again highlight a few of the key commodities that might be signalling that deflation is still an issue..despite the central banks QE. 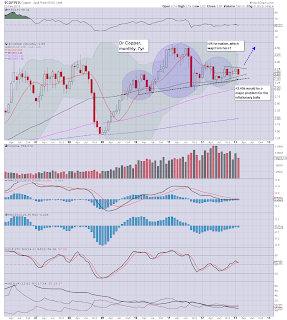 Like many of the giant monthly charts spanning the last 4 years or so, we have a pretty clear H/S formation.

The doomer bears merely need to see Copper break <3.50 (base of narrow wedge)..and then 3.40. If we're trading - at any point, in the 3.30s in March/April...it will be a VERY serious warning for the equity bulls. 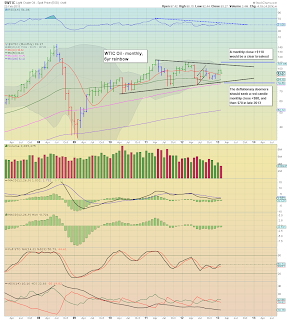 Right now we're obviously bullish, but the trading range is getting pretty tight.

First bearish warning will be a daily/weekly close <$90. The $80 level is even more important though, and if we break under that..then I'd have to believe equities will be starting a major multi-month decline. 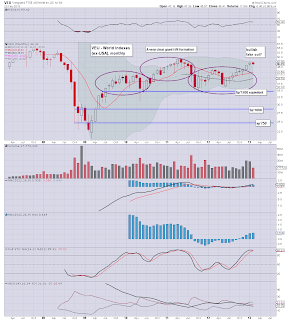 Again, we have a pretty good H/S formation. The problem for the bears since last December is we appear to have a clear breakout. We've still not broken above the highs of spring 2011 - which is also where commodities peaked, but we're getting close.

We're seeing resistance at the upper bollinger of 47.  I have to say, I won't be a confident permabear until I see the VEU chart back <40. 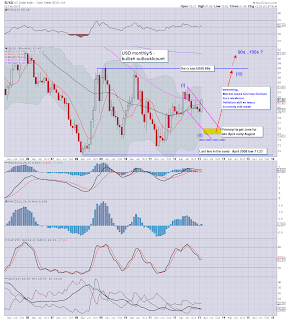 *As you can see, I'm not hiding anything here. I was indeed seeking a much lower level sometime this summer..but instead...the dollar is breaking up and out!

Target would be the 88s - the peak of the last two major up cycles..if not even higher.

Next week will be largely about the Bernanke. Its time for the Chairman to do his twice yearly report to the US House and Senate finance committees. That will span both Tuesday and Wednesday. You can be sure - as usual, it will get blanket coverage on the main clown finance TV networks.

Often is the case, the market will drop hard on the first day, but will bounce on the second.

--
To wrap up, those bears seeking major equity weakness should watch those key levels on Copper, Oil, and seek continued strength in the USD.

As ever, all comments always welcome. Good wishes from London

I will be back on Monday :)
Posted by Trading Sunset at 19:16:00
Email ThisBlogThis!Share to TwitterShare to FacebookShare to Pinterest

Its been a whole year since I started my official little page for my semi-coherent market ramblings.

I would like to express my thanks to the following, who gave me some initial web exposure...

*I wish I could send you each a giant COMEX gold bar, but right now..my thanks will have to suffice.
--

More than anything, I sure hope we get the big down cycle that so many out there are still seeking.

I think most of the doomer bears would be very much content, if we only have to wait another few months for the first significant decline.

Personally, I will probably be able to wait..as long as it takes. We all know this nonsense - which itself will be approaching its fourth anniversary low next month, is built on delusion, lies and printed money. At some point..it will conclude, the only issues are in what style..and over what time span. 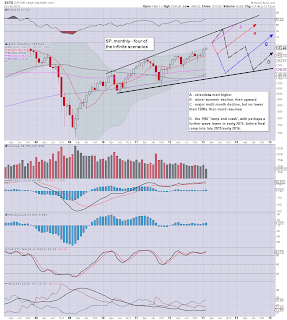 I sure see a lot of talk about 'some problem issues' in May. Hell, right now, I'd settle for a 10% 4-8 week down cycle, that would at least be something for the bears.

Yet, what we really need is a major multi-month decline, in the style of summer 2011. Scenario C' outlines that kind of move..the sp'1200s sure would be useful.

--
*next main posting..late Saturday... US weekly indexes.
Posted by Trading Sunset at 04:00:00
Email ThisBlogThis!Share to TwitterShare to FacebookShare to Pinterest

The main indexes melted higher across the day, and closed the week pretty bullish. The two leaders - Transports and R2K, both closed around 1% higher. With the Dow @ 14000, and the SP @ 1515, the US market remains on a very bullish upward trend. 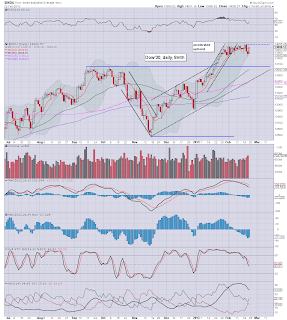 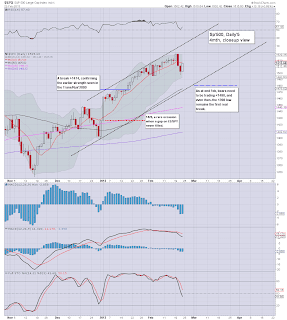 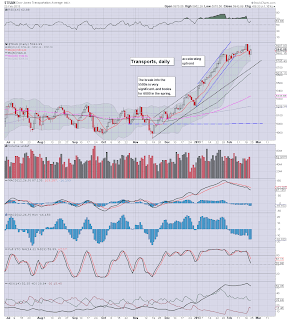 It looks like the market makers may have been playing some clever games this afternoon, pinning the Dow to destroy as many of the weekly option positions as possible. Dow 14000, I'm sure they are very pleased with themselves this Friday evening.
--

There is little else to be said.

It was a somewhat compressed week, the Tuesday highs really capitulated a few. The two day reversal was somewhat impressive, yet..Fridays action negated half of the declines.

I realise some would merely say its a 50% fib retracement of the first wave lower, and I can understand that outlook.

Yet even if we do somehow see a further down wave next week, into the sp'1490/80s, I have near zero doubt we'll be breaking sharply higher in March..and probably April too.

A little more later...on what was a marker day for this site.
Posted by Trading Sunset at 01:00:00
Email ThisBlogThis!Share to TwitterShare to FacebookShare to Pinterest
Newer Posts Older Posts Home
Subscribe to: Posts (Atom)