With equities climbing for a third day, the VIX melted lower, settling -0.7% @ 15.77. If the main indexes can break another 1-2% higher, the VIX will be at least in the low 15s..if not lower. The big VIX 20 threshold remains the prime target for the bears this month. 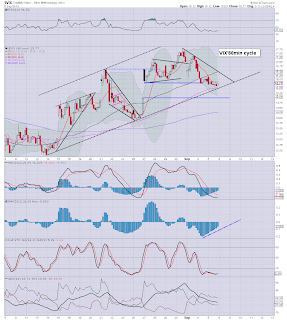 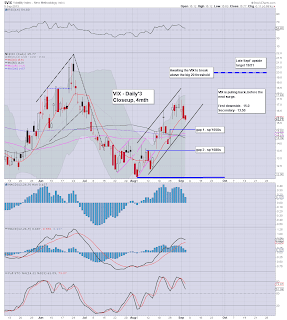 So...another day for the equity bears to forget.

There really isn't much to say. Hourly VIX charts are now very low..and there is certainly upside potential. However, the daily charts are now clearly on the decline, and VIX could easily fall for some days to come.

Frankly, it is not looking good for the bears right now. If we close at current levels, at the Friday close, then the weekly cycles will be offering the equity bulls a major ramp into the autumn.

The markets reaction to the monthly jobs data will be very interesting to watch.

US equities traded in a very narrow range, with the sp +2pts @ 1655. The near term trend remains to the upside. Metals closed weak, with gold -$25. Oil held moderate gains of 0.9%. VIX confirmed what remains a very complacent market, melting around 0.5% lower. 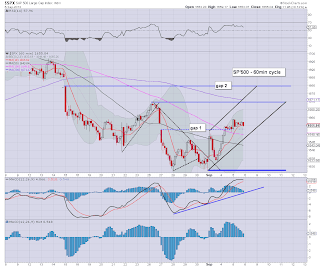 Despite a lot of econ-data, and a $3bn QE, the bulls sure didn't see any significant follow through from yesterdays gains.

-
A somewhat tiresome day....but the usual things across the evening...
Posted by Trading Sunset at 21:02:00
Email ThisBlogThis!Share to TwitterShare to FacebookShare to Pinterest

The market has moved into a very quiet mood, and the algo-bots have a significant chance to close the market in the sp'1660s. Precious metals remain weak, with Gold -$26. Bears look entirely absent, ahead of the monthly jobs data. 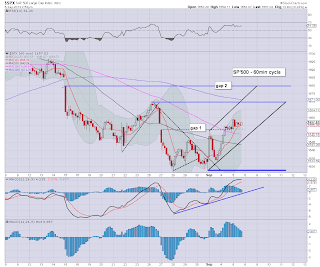 It is indeed dead quiet out there..and with the 15/60min cycles suggestive of upside into the mid 1660s - no later than early tomorrow, there is absolutely nothing enticing me to re-short what still is, a nasty..twisted, and deluded market.
--

special note..
look for the algo-bots to ramp in the closing hour..not least to trigger all the 1659/61 short-stops.
-

All things considered, it looks like we're going all the way back up to the 1680s.

Lets just see how Mr Market opens tomorrow..and take it from there.


3.45pm..well, the 1660s don't look viable today. Anyway...shorting ahead of the jobs data..overly risky.
Posted by Trading Sunset at 19:55:00
Email ThisBlogThis!Share to TwitterShare to FacebookShare to Pinterest

2pm update - not getting involved

The market is comfortably holding moderate gains, and the smaller cycles are offering slight upside into the close. Bears have seemingly no real reason to be shorting ahead of the jobs data. The market mood simply appears to be one of 'hey..its all fine again'. 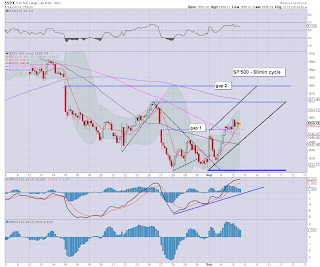 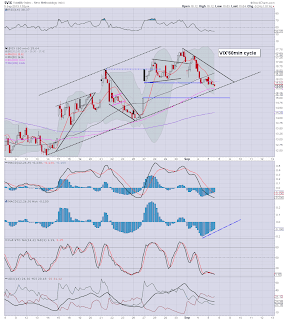 Suffice to say, the mood at the casino table looks utterly complacent..and there simply doesn't seem any point in taking new short positions.

I will note, if we do somehow spike into the 1680s - whether tomorrow..or early next week ..I will be hitting buttons.

As an options trader, I'm just watching the decay on the VIX call chain.

2.34pm...nothing  has changed..market still looks vulnerable for minor upside into the close, with a very real risk of a leap in the 1670s tomorrow..even 1680 on a 'isn't the economy doing great!' spike.

VIX looks like it merely wants to melt lower into the close...15.50s is the target for today.
Posted by Trading Sunset at 18:55:00
Email ThisBlogThis!Share to TwitterShare to FacebookShare to Pinterest

Market is holding moderate gains, and despite a touch of weakness, the smaller 5/15min cycles are offering upside into late afternoon. No doubt the QE of $3bn will help. A close in the 1660s will open up the 1680/85 upper gap zone. VIX is confirming a market..that just 'doesn't care'. 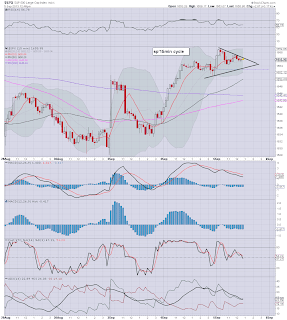 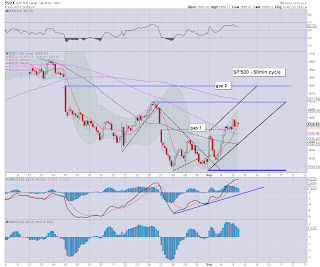 The 15min cycle is offering a bullish pennant..with a daily close in the 1660s.

Frankly, this looks a lousy situation for the bears, not least ahead of a jobs number that might see the market jump 1% for no good reason.

I should add, I will have little concern shorting in the 1680s..although even then, the big/serious bear money should have a stop in the 1690s.
-
Posted by Trading Sunset at 17:54:00
Email ThisBlogThis!Share to TwitterShare to FacebookShare to Pinterest

The main indexes are holding slight gains..a touch below key multiple-resistance. The VIX is -1%, and the market has seemingly zero concern for the coming days. Precious metals remain weak, Gold -$23. With the monthly jobs data tomorrow, bears face significant risk of further upside. 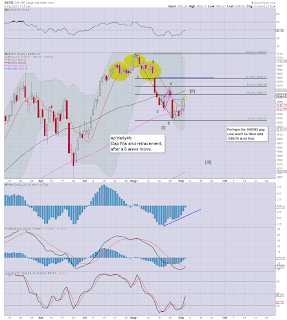 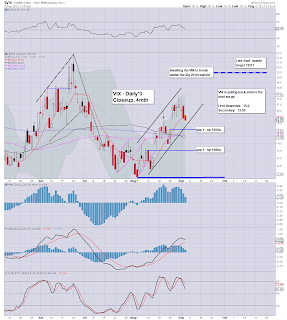 Maybe its just me, but I'm starting to get real annoyed with this nonsense market.

Not only do the bulls now have the daily cycles about to go bullish, but the weekly charts are similarly starting to show initial signs of a turn.

Frankly, shorting ahead of  tomorrows jobs data seems overly risky..and right now..I'm going to sit it out until next week.


12.38pm.. looks like a bullish pennant on the 15min chart....should be seeing some upside into the afternoon.
Posted by Trading Sunset at 16:52:00
Email ThisBlogThis!Share to TwitterShare to FacebookShare to Pinterest

The main indexes are seeing a small reaction from what are significant layers of resistance. Precious metals are significantly lower, with Gold -$25. Oil is still holding small gains though. VIX is still a touch lower, showing zero sign of concern. 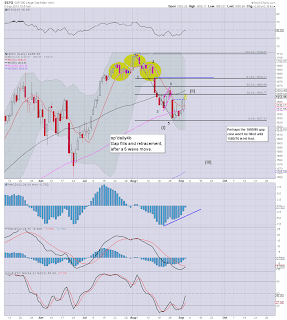 Well, is that it?

As things are, I'm tired, and despite the morning action so far, I just don't sense any real bearish power right now.

I ain't getting involved.

If that sounds weak minded, and back tracking from yesterdays plan....its because it is.
--
Posted by Trading Sunset at 15:53:00
Email ThisBlogThis!Share to TwitterShare to FacebookShare to Pinterest

The main indexes are continuing to climb, with the sp' making a play to break into the 1660s. VIX is lower, but only by 1%. Metals are moderately weak, Gold -$5. Oil is +0.4%. Bulls should be content with any positive daily close. 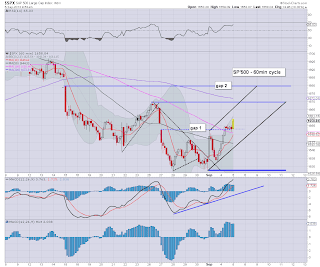 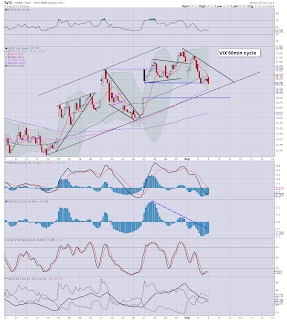 Well, as I feared, the market is still battling higher.

The only issue is whether the upper gap in the 1680s is going to be hit in the current wave.

The mood out there certainly doesn't feel bearish.

--
*I remain on the sidelines..trying...vainly..to remain focused..but with an open mind. Urghh 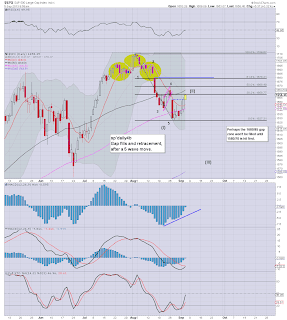 If thats the case..no point shorting until next week.


10.39am.. I just don't sense any real downside action viable today. Market is seeing some chop in the mid 1650s..but really, that doesn't suggest anything significant for later today/early tomorrow.
Posted by Trading Sunset at 14:56:00
Email ThisBlogThis!Share to TwitterShare to FacebookShare to Pinterest

Good morning. Futures are a touch higher, sp +2pts, we're set to open at 1655. Precious metals are a little higher, Gold +$5. Bulls should be desperate to keep the current bounce going, with a daily close in the 1660s. Bears need to break into the 1640s by the Friday close. 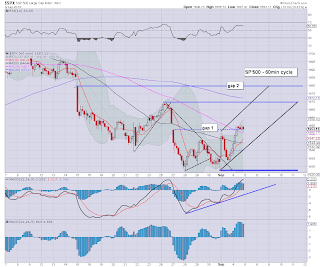 There is a lot of other econ-data today, along with a QE of $3bn.

Bears need to be very careful today..and possibly into tomorrow.
--

Not surprisingly...Oscar is bullish.
Posted by Trading Sunset at 13:21:00
Email ThisBlogThis!Share to TwitterShare to FacebookShare to Pinterest

Bears need to contain the bounce

The current equity bounce is to be expected, but the bears are going to need to contain this bounce within the next day or two. Arguably, bears need a weekly close back in the sp'1640s, and that will keep the door open to a further wave lower, down to the 1580/70s. 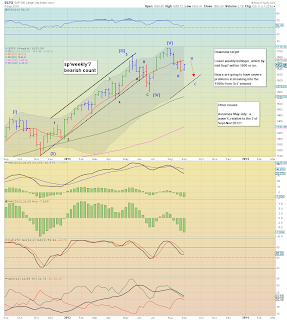 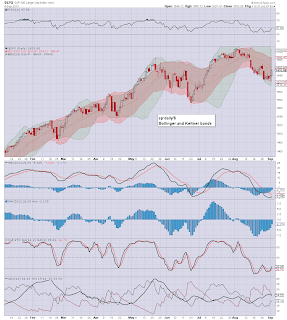 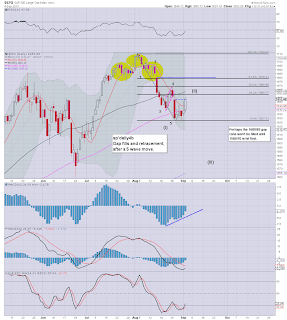 With the market rallying, the second red candle on the weekly 'rainbow' charts has now flipped to blue. This should concern the bears, and frankly, I will be VERY concerned if we close the week at..or above current levels.

Bears seeking further downside should look for the current weekly candle to flip back to red, and for that, the market will need to be in the 1640s.

As things are, I think even if the market opens in the low 1660s tomorrow morning, there is no reason why things won't sell back lower into the Friday close.
-

Re: chart daily'6. The 'worse case' for those bears considering a re-short, is probably the sp'1680/85 gap zone. The problem with that though, any weekly close in the 1680s, will threaten/overturn the bigger mid-term bearish outlook.

I have been inspired to dig up an old historic chart, after seeing a posting by 'TraderMoe'  He (or she) has a different take on things than me, but still...worth checking out. 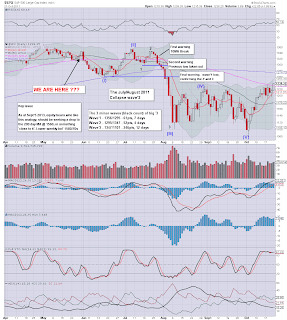 Well, I've placed a rather obvious arrow where I think we might be.

As ever.. ALL cycles are unique. Nothing ever repeats exactly, but the style of a down..or up wave, will often repeat in the same manner.

If the market can get stuck in the coming day or two..and then proceed to hit the lower weekly bollinger (the target I been droning on about for some weeks) - currently sp'1579...then the analogy is arguably still viable. Similarly, ANY daily close >1709..and it has to get dropped.

There is a very wide array of econ data for Thursday....

That should give the market plenty of excuses for some dynamic price action in the morning session.

--
I also noticed an interesting outlook by Knight on slopeofhope . Knight is seeking 1670 - where the weekly 10MA is..then a big drop..before a hit of the 200 day MA..within the next 2-3 weeks. Certainly, that is effectively the same as what I've been talking about.

So, having bailed last Friday, I remain waiting to re-short this nasty market. I will be looking to pick up a new VIX call block, and will look to hold at least until late Friday.

There remain a great many issues that should kick the VIX into the 20s this month, whether its the German elections, US debt ceiling talk, the FOMC, or the looming US attack on Syria. I find it next to impossible to believe the market is going to ramp to new index highs.

As ever, despite my own permabearish thoughts, form your own conclusions ;) 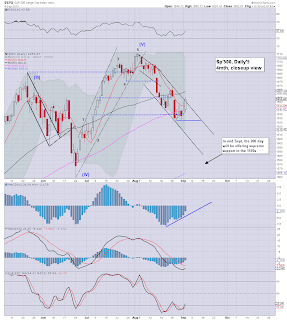 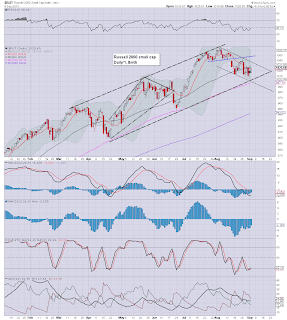 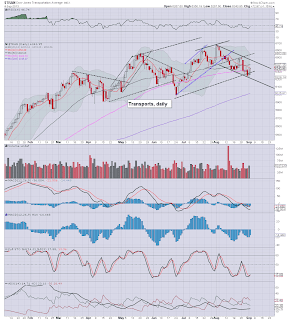 The open saw some very mild chop, but it sure didn't take long for the bulls to pile in, and we saw some rather consistent gains build across the day.

Underlying MACD (blue bar histogram) ticked higher for the third day. However, it remains difficult to say if we'll go positive cycle by the Friday close.

*I remain on the sidelines, but seeking to short the main market, early Thursday.
--
a little more later...
Posted by Trading Sunset at 01:00:00
Email ThisBlogThis!Share to TwitterShare to FacebookShare to Pinterest
Newer Posts Older Posts Home
Subscribe to: Posts (Atom)