Whilst US equities saw continued minor chop in the sp'1852/40 zone, the VIX managed to hold moderate gains, settling +5% @ 14.35. Near term outlook remains for the VIX to trundle largely sideways in the 15/12 zone, until the FOMC of March'19. 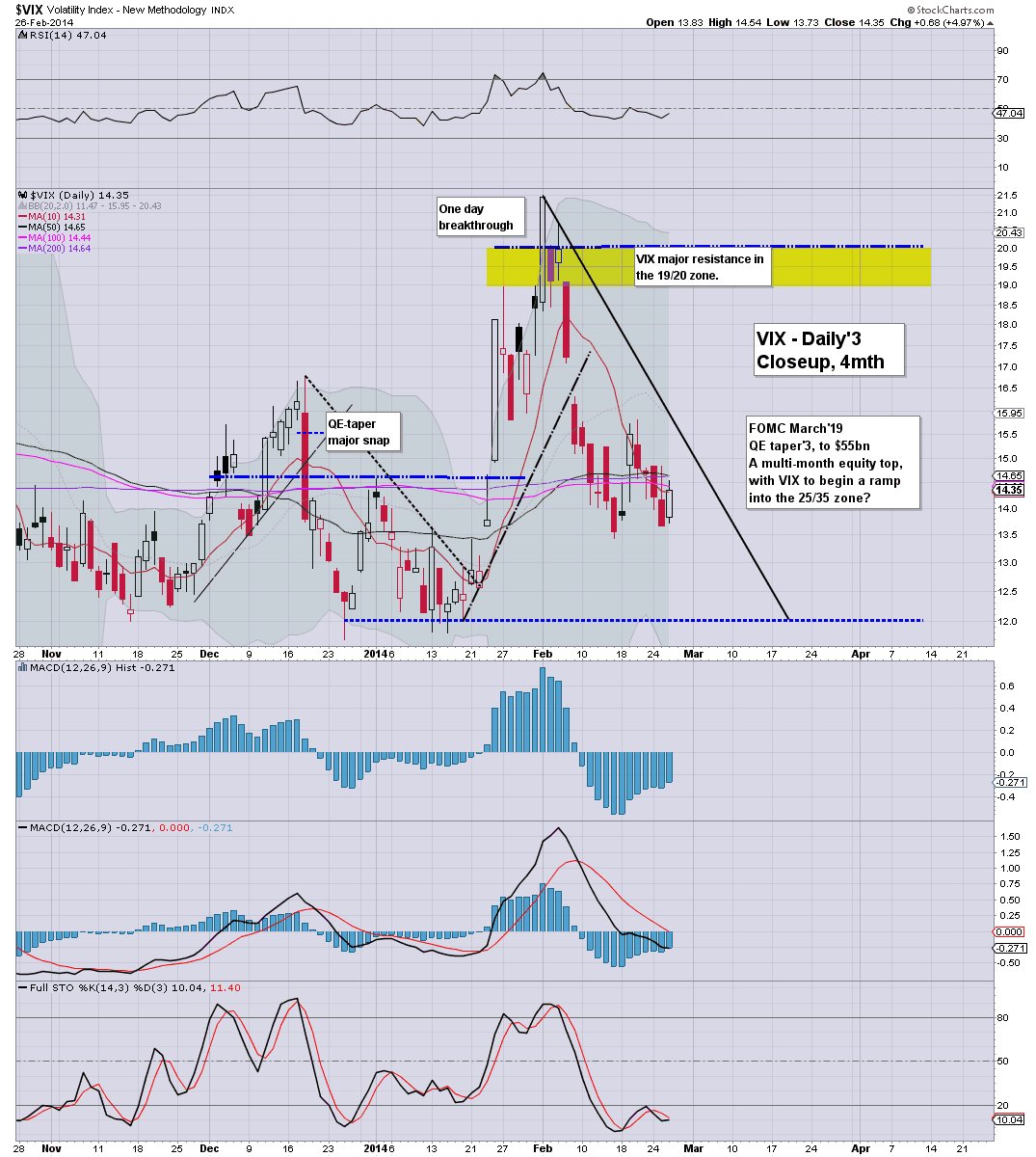 Yes, the VIX climbed 5%, but it remains within a broader down trend. The big 20 threshold remains a long way up, and barring a surprise break <sp'1800 in the near term, VIX is likely to remain low at least until the next FOMC. 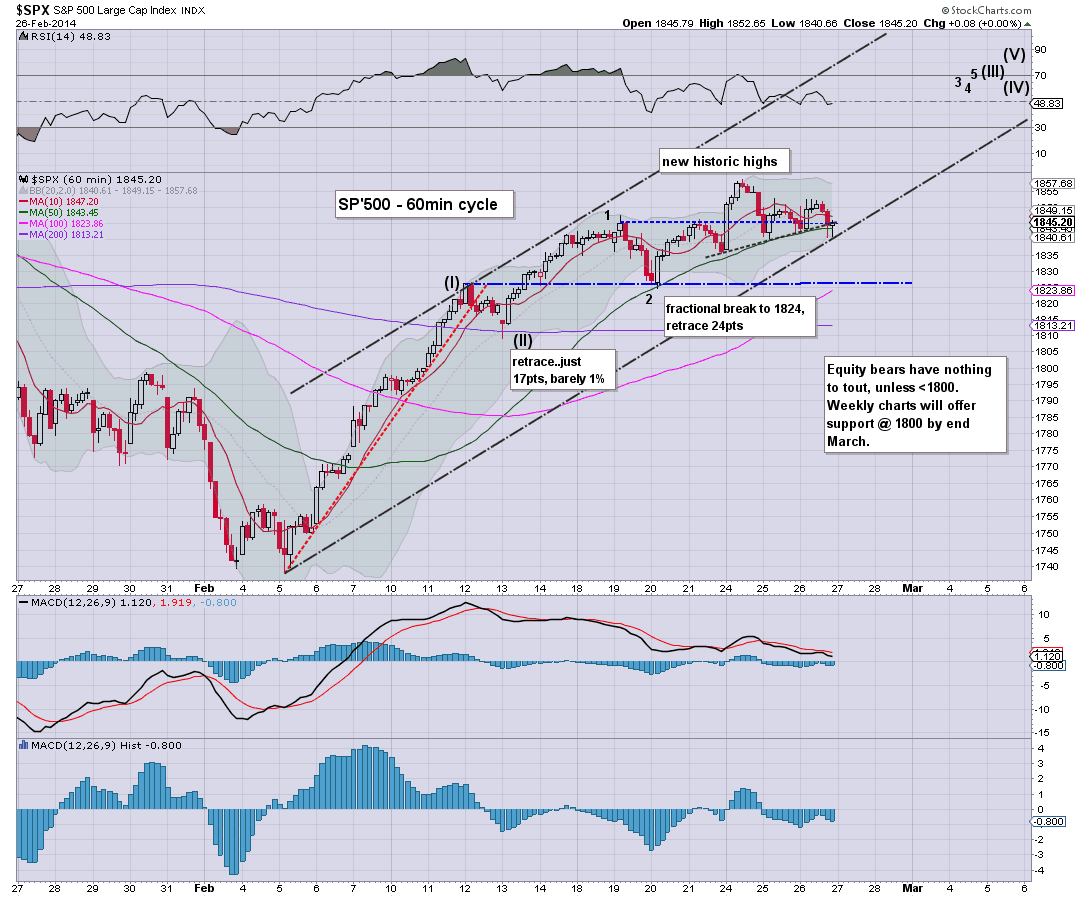 Are you feeling a little deja vu?
--

Another day of minor chop, although some notable early sig' gains in the R2K, breaking a new historic high.

With Yellen due to speak tomorrow morning, and a truck load ($3-4bn) of QE-pomo, equity bears should have a restless nights sleep.

--
The usual bits and pieces across the evening
Posted by Trading Sunset at 21:01:00
Email ThisBlogThis!Share to TwitterShare to FacebookShare to Pinterest

3pm update - chop ahead of the Yellen

Another choppy day for the market, but then...Mr Market is probably just waiting for the Yellen to appear before the US senate tomorrow morning. Considering the hourly index cycles, market is primed for another major wave higher on some 'the recovery remains on track' fedspeak. 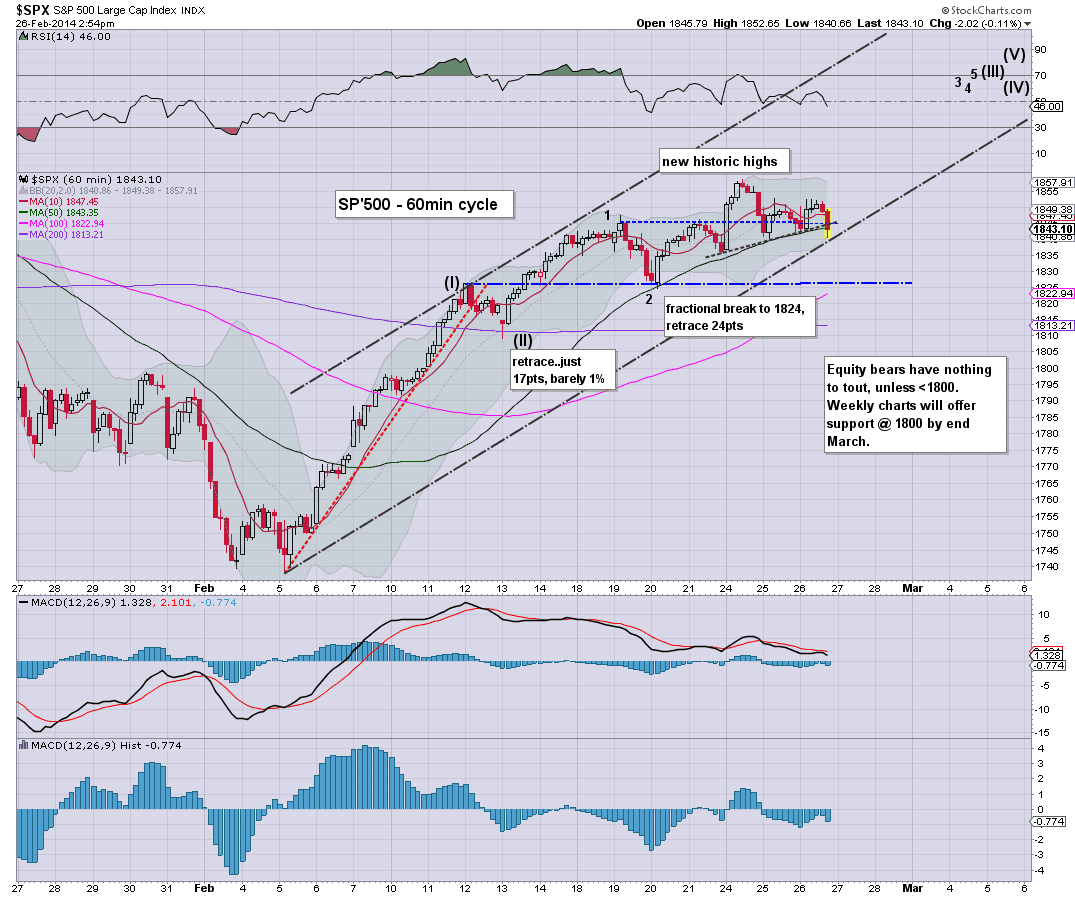 It is somewhat amusing how many are getting overly excited at these sporadic little down waves of 3, 5, 10pts... or even a little more.

Really, anyone getting overly bearish right now, should just go look at the Nasdaq monthly..or the R2K I've been highlighting today.

I suppose some would then counter with 'what about the Dow'?

Regardless..bears face huge problems tomorrow, and ALL index cycles favour the bulls for the remainder of the week.

Market continues to hold moderate gains, with a target close in the sp'1850s. Most notable index, the R2K, with sig' gains of 1.2%, a new historic high - bodes well for the equity bulls into March. Metals remain weak, Gold -$11. 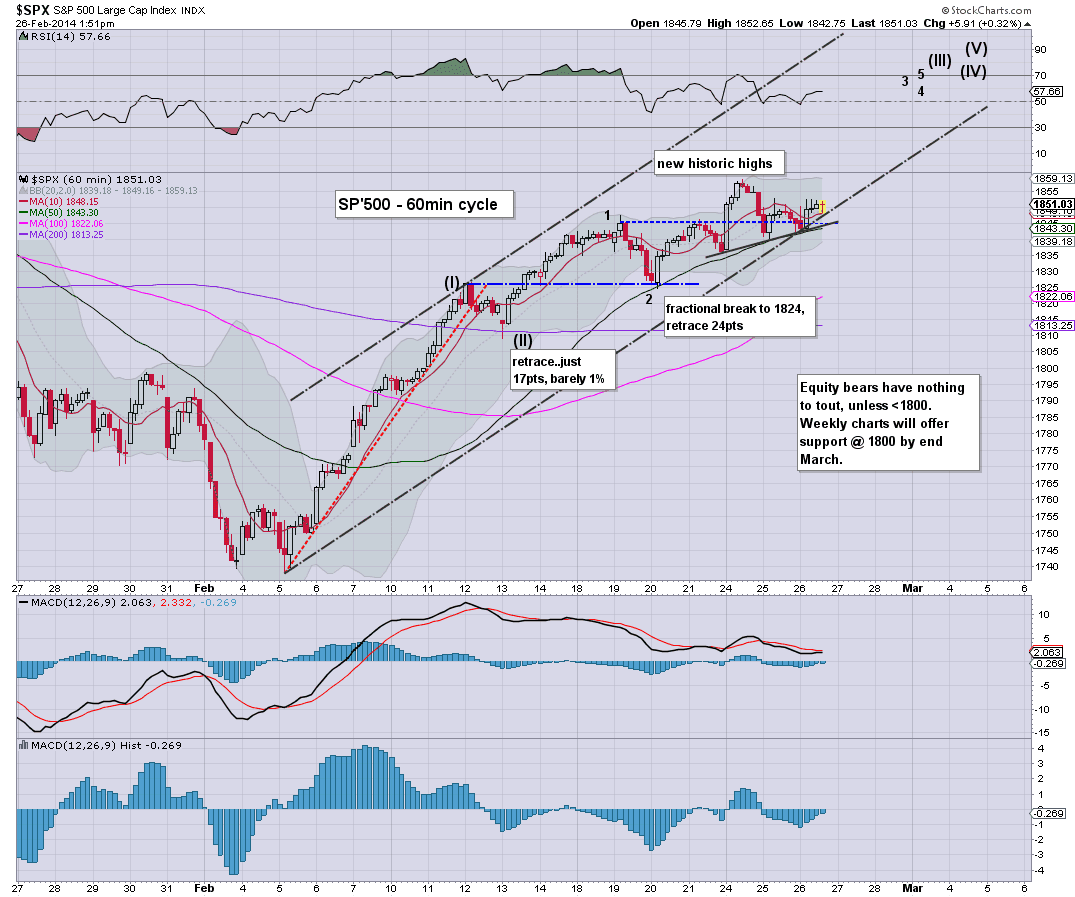 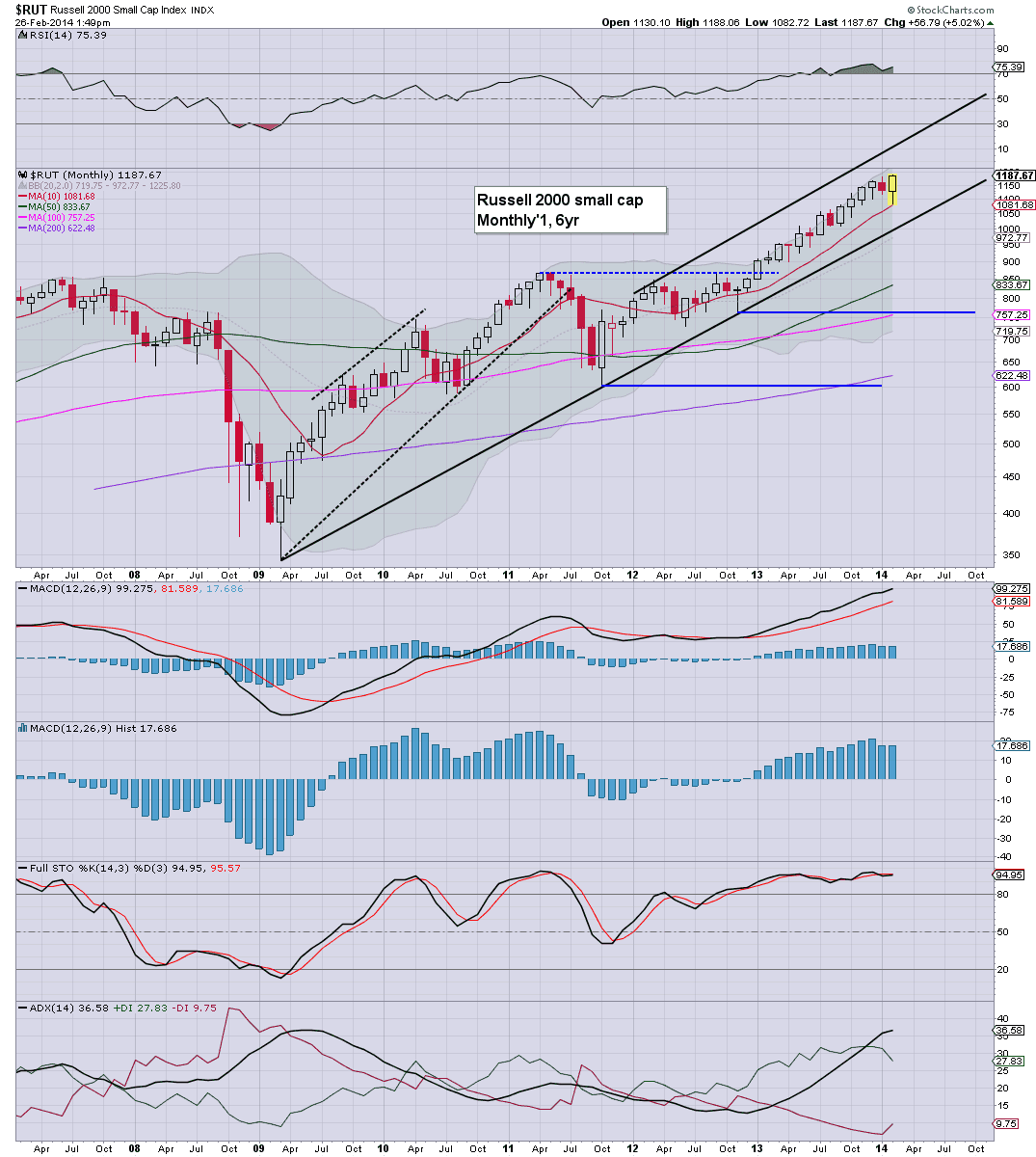 *Seen on the giant monthly chart, the R2K gain is indeed very powerful, and bodes well for those holding long across the coming weekend...into March.
--

I remain trying to ignore the minor noise, and am merely waiting until the next FOMC as a target 'big short'.

Still...I just don't see any real downside power out there. This is the same nonsense we saw at the open...and yesterday..and the day before...etc....

Bears face Yellen and 3-4bn of QE tomorrow....who wants to be short ahead of that?

(I fully note...these move are ALL tiny..and in many ways..it is laughable they even merit ANY mention).

Personally, i just await the Yellen..will make for something to watch tomorrow.

5/15min cycles will be offering upside into the close..AND tomorrow.
Posted by Trading Sunset at 18:53:00
Email ThisBlogThis!Share to TwitterShare to FacebookShare to Pinterest

US equities continue to slowly melt higher, and a daily close in the sp'1850s now looks very likely. Precious metals remain weak, Gold -$11. The VIX is holding minor gains of 1.8%, but if sp'1860s, then VIX will turn back red. 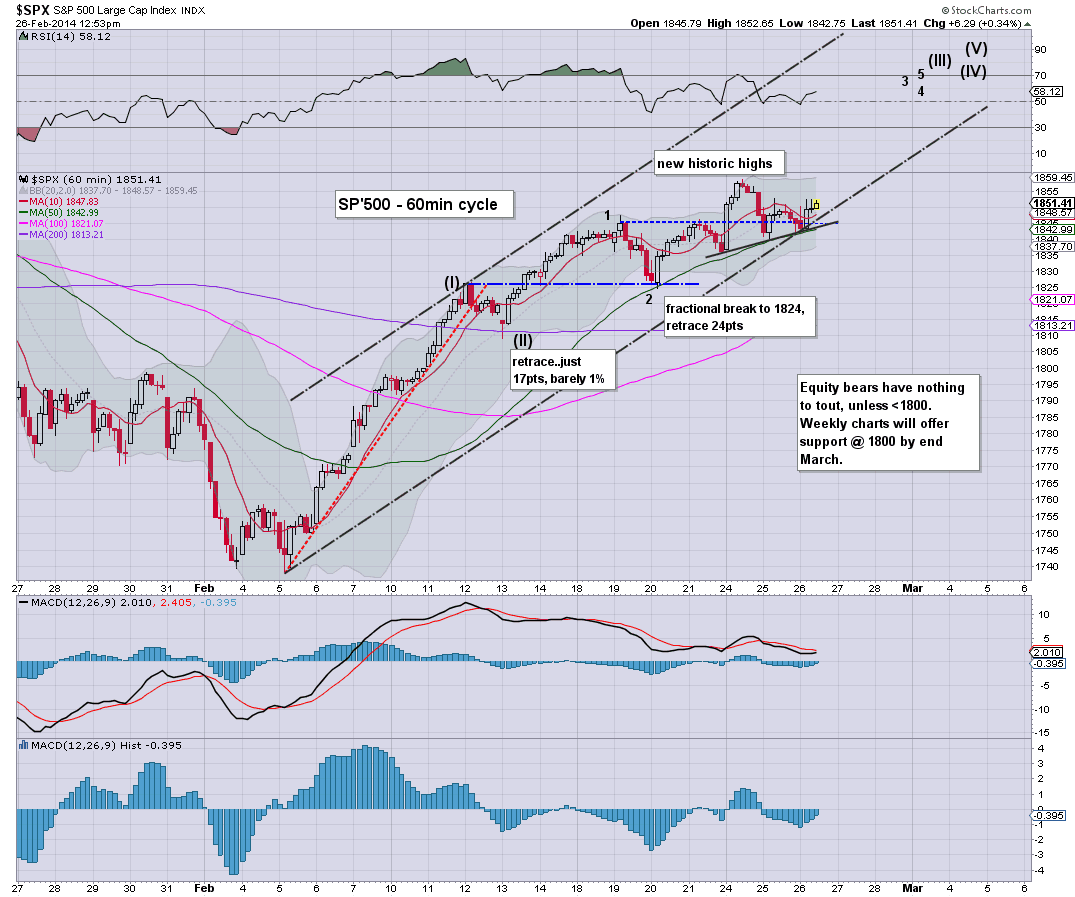 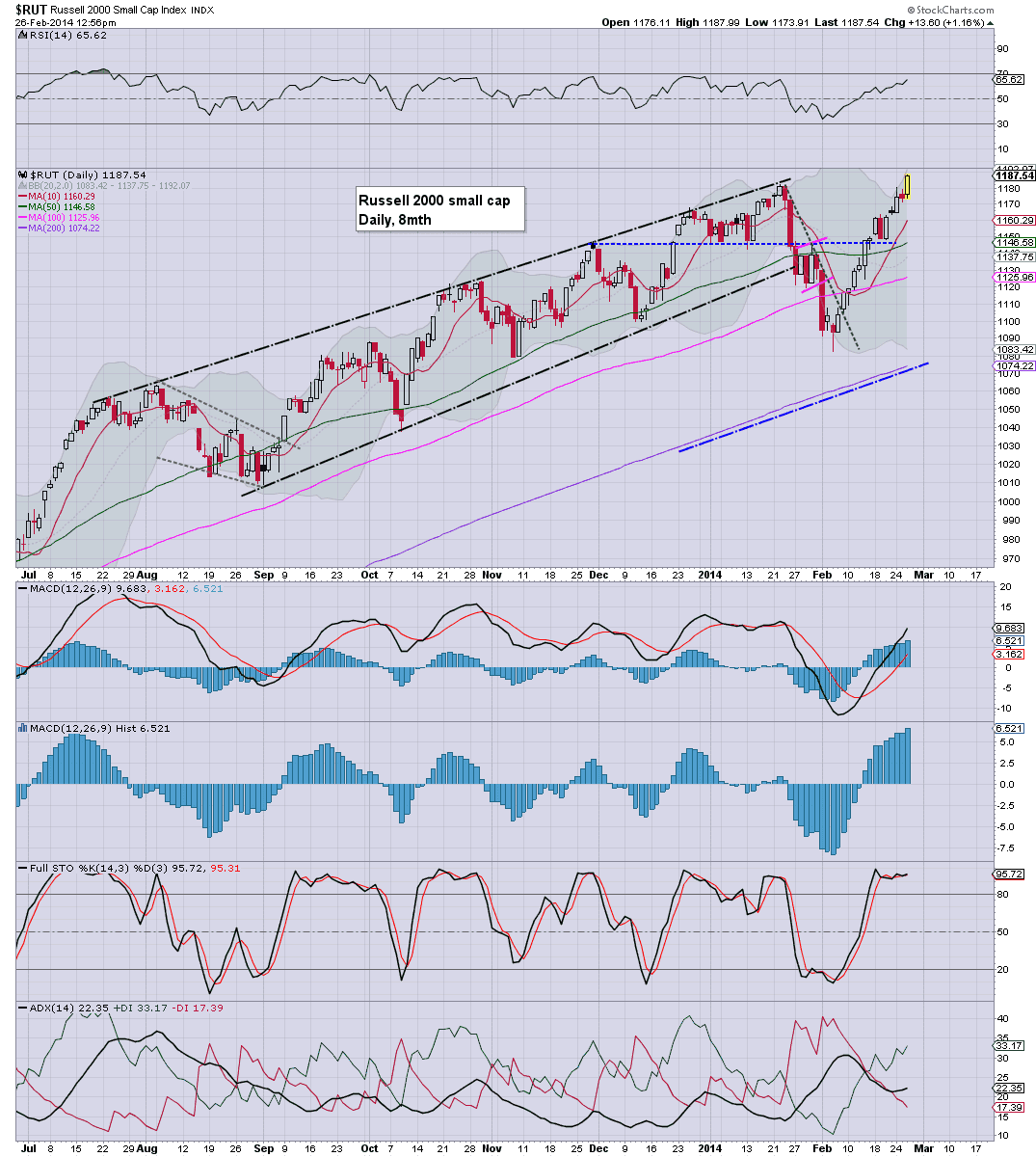 Significant gains of 1.1%, a new historic high for the second market leader. Again, that does help to clarify where we are headed in the early part of March.

notable weakness: UGAZ -9%...
Posted by Trading Sunset at 17:58:00
Email ThisBlogThis!Share to TwitterShare to FacebookShare to Pinterest

With the bears having no downside power, the market is continue to broadly claw higher. A daily close in the sp'1850s looks probable, although it should be noted..even the 1860s are viable today. Metals are weak, Gold -$14.  Despite higher indexes, VIX is holding minor gains of 2-3% 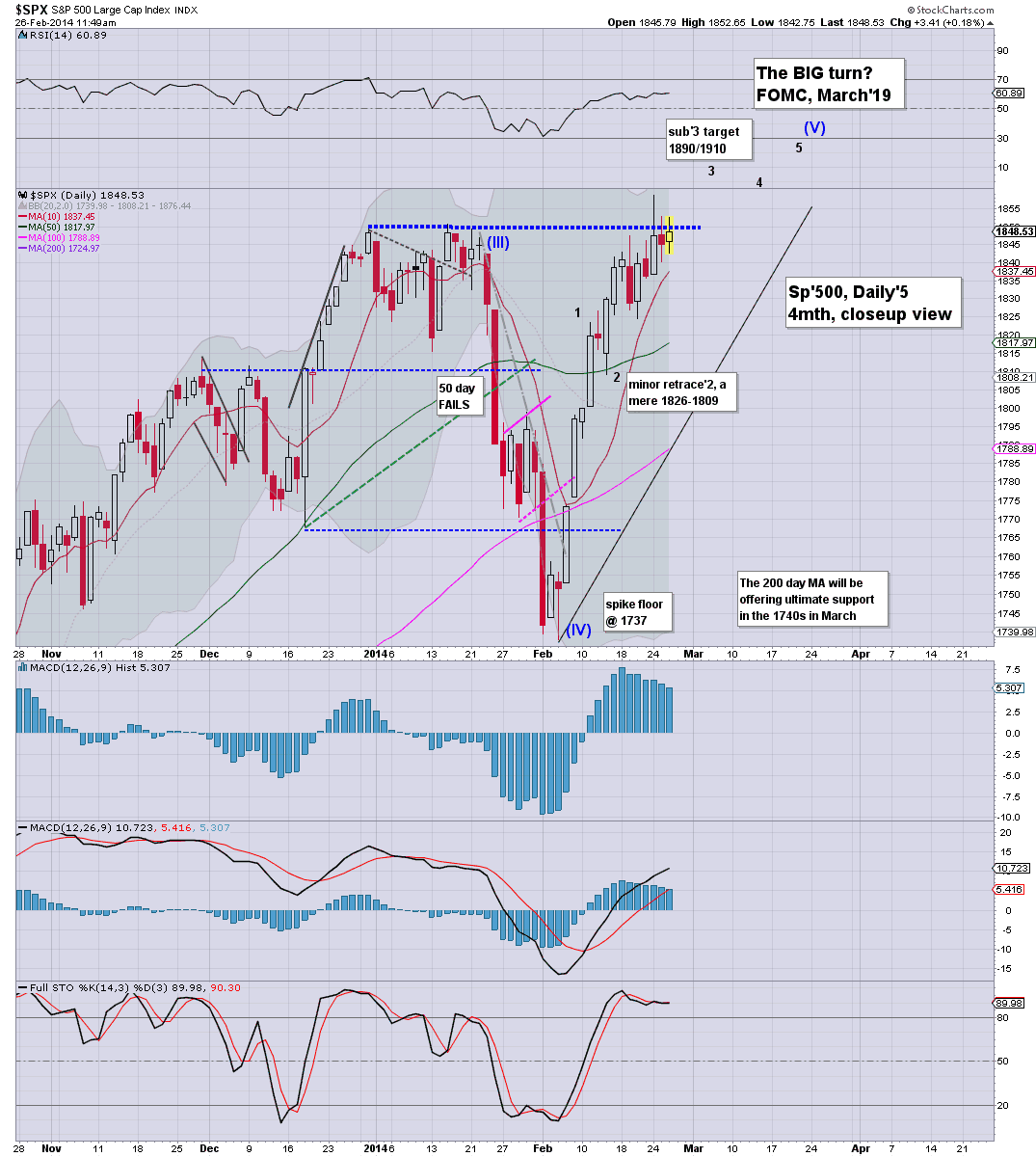 Equity bulls are just not getting any significant upside today, but hey..does it matter? Neither are the bears able to push lower, and we have a reasonable floor of 1840 in the immediate term.

UGAZ -7%, and is making for a 3 day decline of around -30%, I guess it must be those green shoots of spring coming? 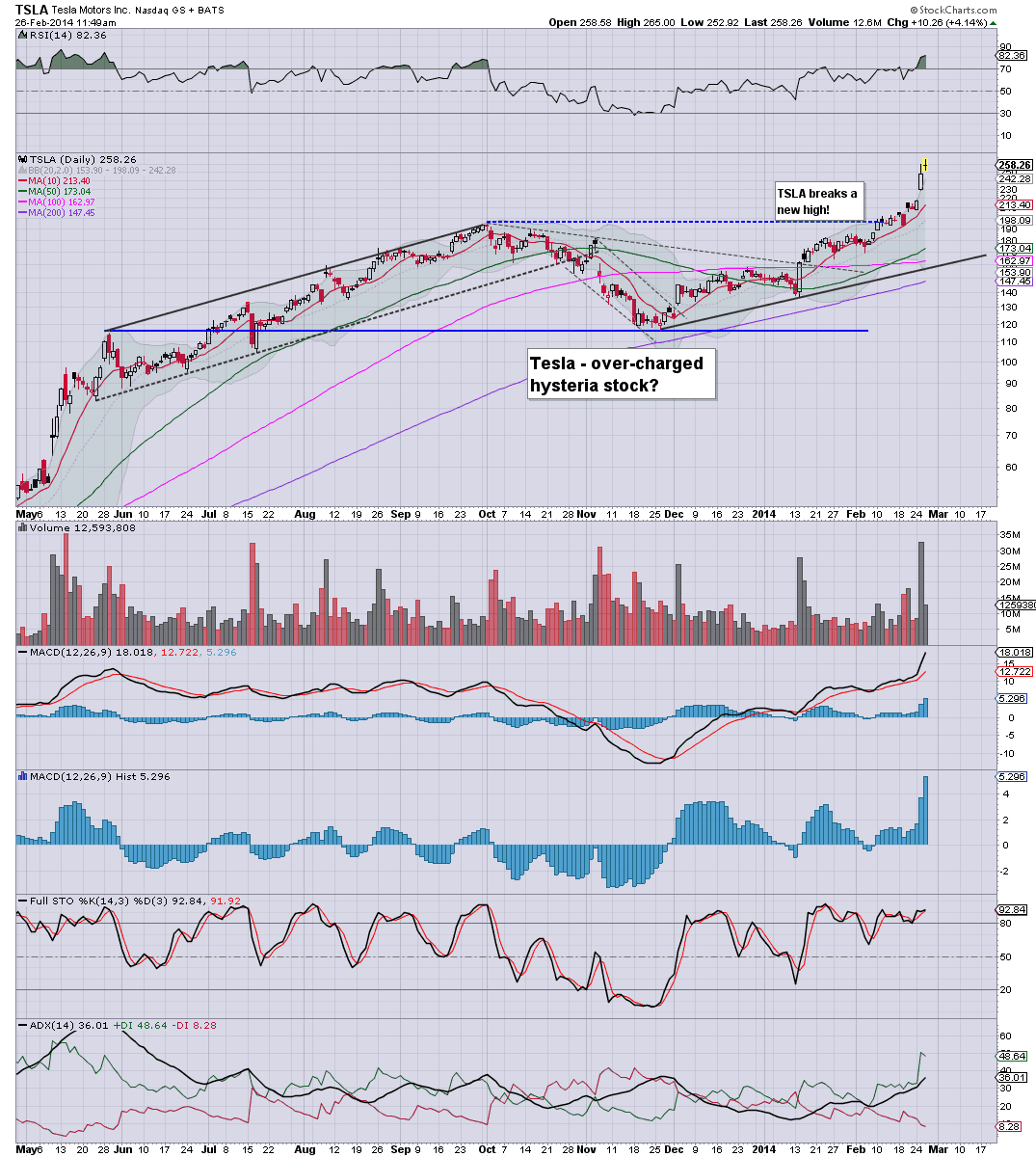 As I noted yesterday..it is pure hysteria. Entertaining to watch, but I'll never meddle in.

--
time for tea!
Posted by Trading Sunset at 16:52:00
Email ThisBlogThis!Share to TwitterShare to FacebookShare to Pinterest

11am update - no downside pressure

A bit of a choppy mess in the opening 30 minutes, but Mr Market held the soft support of sp'1840, and is already back in the 1850s again. Equity bears continue to show no downside power, and there is now the threat of a daily close in the 1860s this week. Metals remain weak, Gold -$10 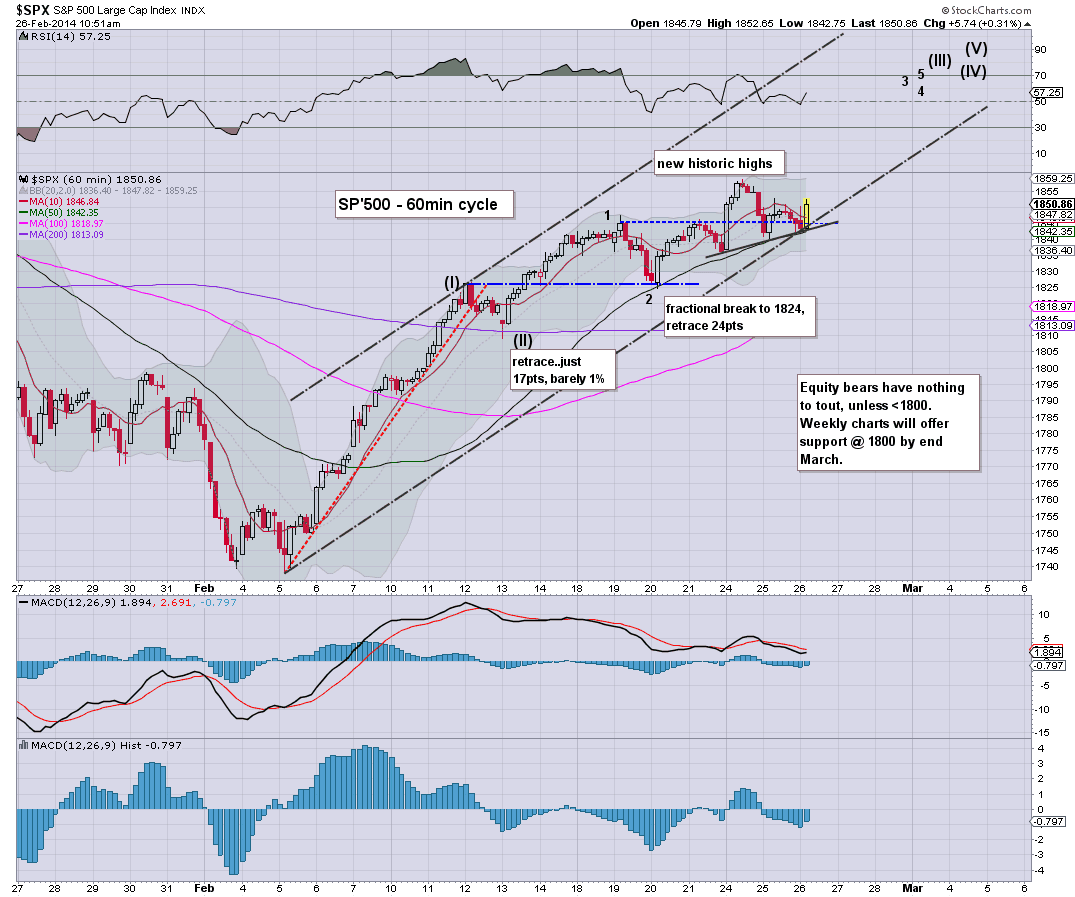 I would be utterly bemused at any bear getting overly excited at the opening weak chop.

It is the SAME nonsense we've seen for weeks now. A few points down...and that was it.
-

With heavy QE tomorrow, so long as Yellen doesn't say something monumentally stupid to the US Senate (such as Gold is NOT a 'relic'), then we'll just keep on clawing higher.


11.07am.. Metals sliding, Gold -$15.  Nothing dramatic..yet, but if it slips back under the 200 day MA, another $17 lower, then it'll be a problem for the gold bugs.
Posted by Trading Sunset at 15:52:00
Email ThisBlogThis!Share to TwitterShare to FacebookShare to Pinterest

US indexes open slightly higher, with the market set to again climb into the 1850s - whether we can close there, is another matter. Precious metals are weak, Gold -$8, although the near term trend remains bullish. 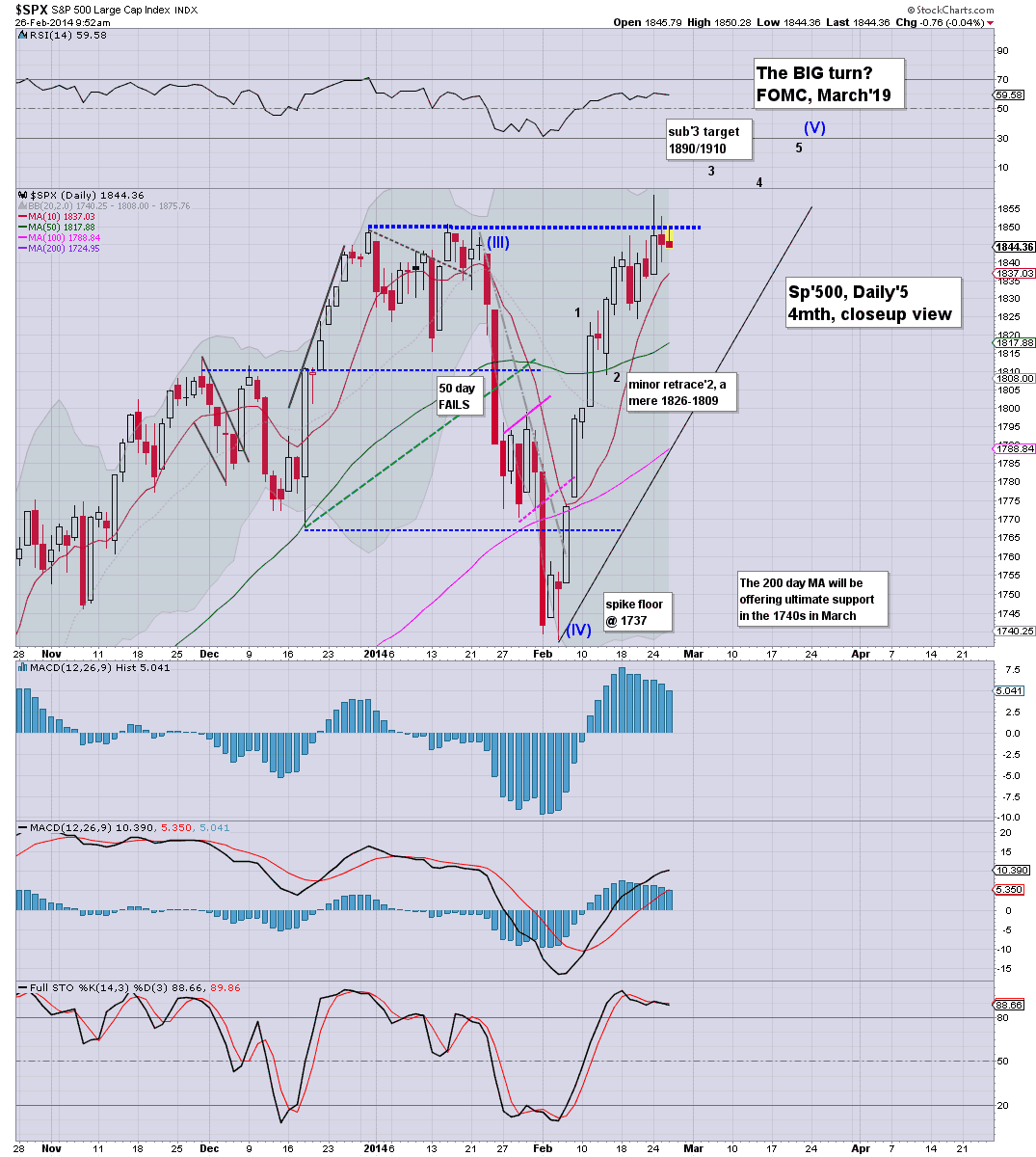 *not exactly the most exciting of opens, and the gains have already faded. Yet...as ever..there is very little downside power. Barring a break <1840, bears have absolutely nothing to look forward to.
---

The mainstream have been getting increasingly twitchy that the sp'500 has not yet made a closing high in the 1850s.  Equity bulls really should be seeking a daily close >1850 either today or tomorrow. There is heavy QE tomorrow, so the opportunity is there.

Dreamworks (DWA): -12%, on lousy results, but then, the Q3 results weren't much good either.

I'm kinda surprised the company only has a market cap of $3bn of so. Regardless, it ain't doing so well.
-


10.15am.. a bit of a choppy mess, but the housing data has given the market a slight kick to the upside.

Hourly MACD cycles look lousy for the bears. A daily close in the 1850s...very probable.

Notable discrepancy..to the indexes... VIX +4%... hmm
Posted by Trading Sunset at 14:53:00
Email ThisBlogThis!Share to TwitterShare to FacebookShare to Pinterest

Good morning. Futures are moderately higher, sp +5pts, we're set to open around 1850. Metals are on the slide, Gold -$9, with Silver -1.0%. Equity bulls look set for an attempt to break into the 1860s late today/early Thursday, with a VIX that continues to reflect a fearless market. 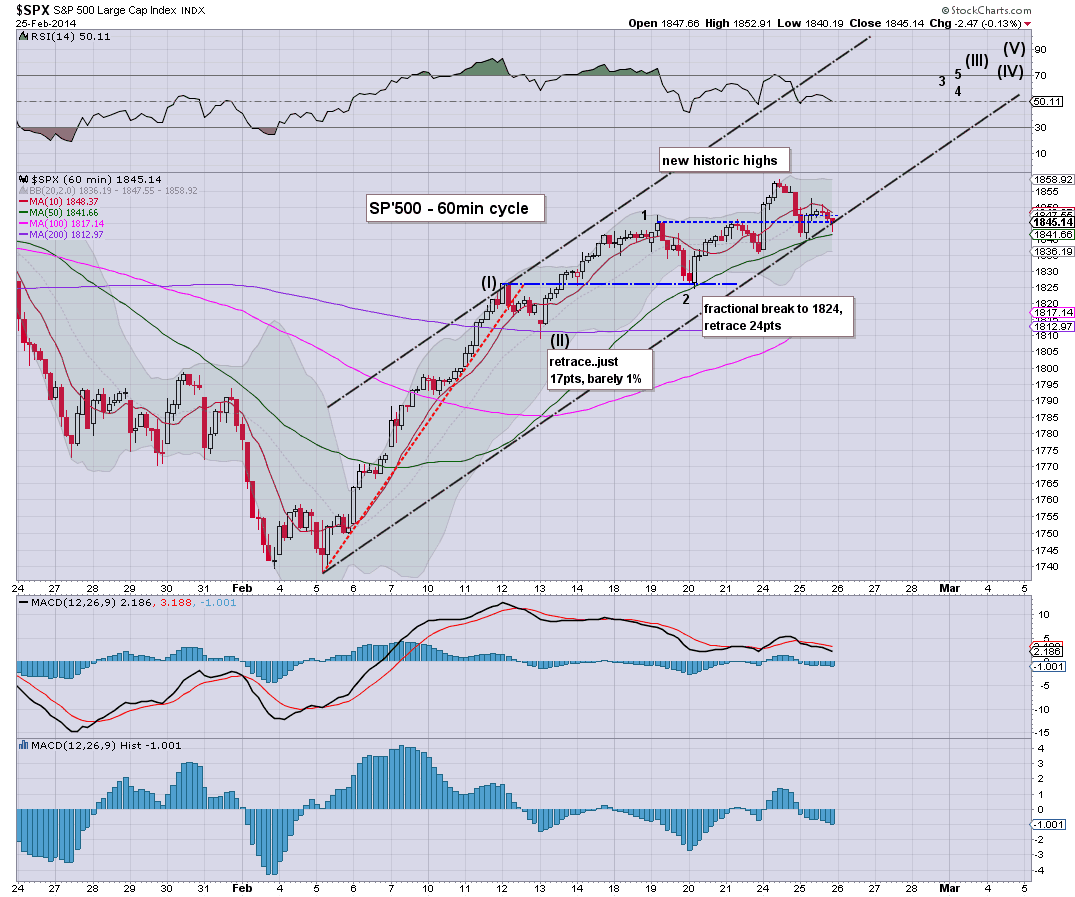 *futures: clown finance TV is not surprisingly wrong with their futures 'guess'.

Due to the ramp in the closing minute - and immediately after the Tuesday close, the 'settle' close is a bit confusing.

As ever, I rely on the SPY, DIA, and IWM ETFs to form an estimate on where we will open.
--

Well, there is no QE-pomo of significance, so the bears need not worry about that. Yet, we have the underlying MACD hourly cycle offering a good 4-6 hours of upside today, possibly even the rest of the week.

Mr Market will largely be awaiting the Yellen though..due to speak to the US Senate tomorrow morning.

--
Video - by Gordon T Long (posted today, but created a few weeks ago)

Mr Long is a bit of a doomer (not that I disagree with hardly anything he says), and is usually worth a listen, if only to be reminded of the bigger macro-economic issues.
-

UGAZ: -8%, and for those not using trading stops since the Monday morning peak..it is now real ugly, with a 3 day decline of around -30%
-

It was a day of minor chop for the US equity indexes, but in the bigger picture, it is just another month for the bulls. This is month'29 of the ramp from the Oct'2011 low of sp'1074. The interesting question is how far down might the bears be able to push this market in the late spring/summer? 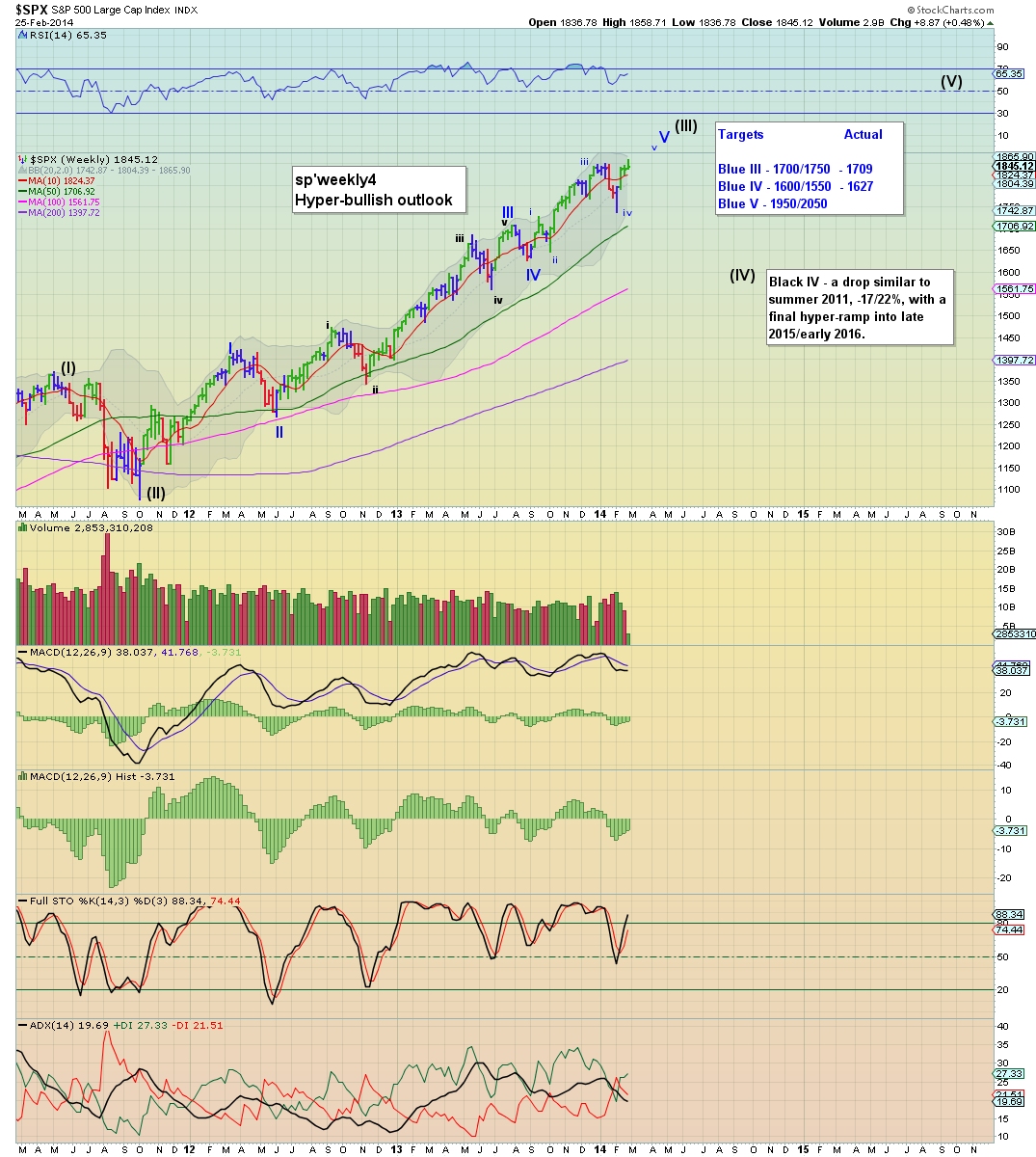 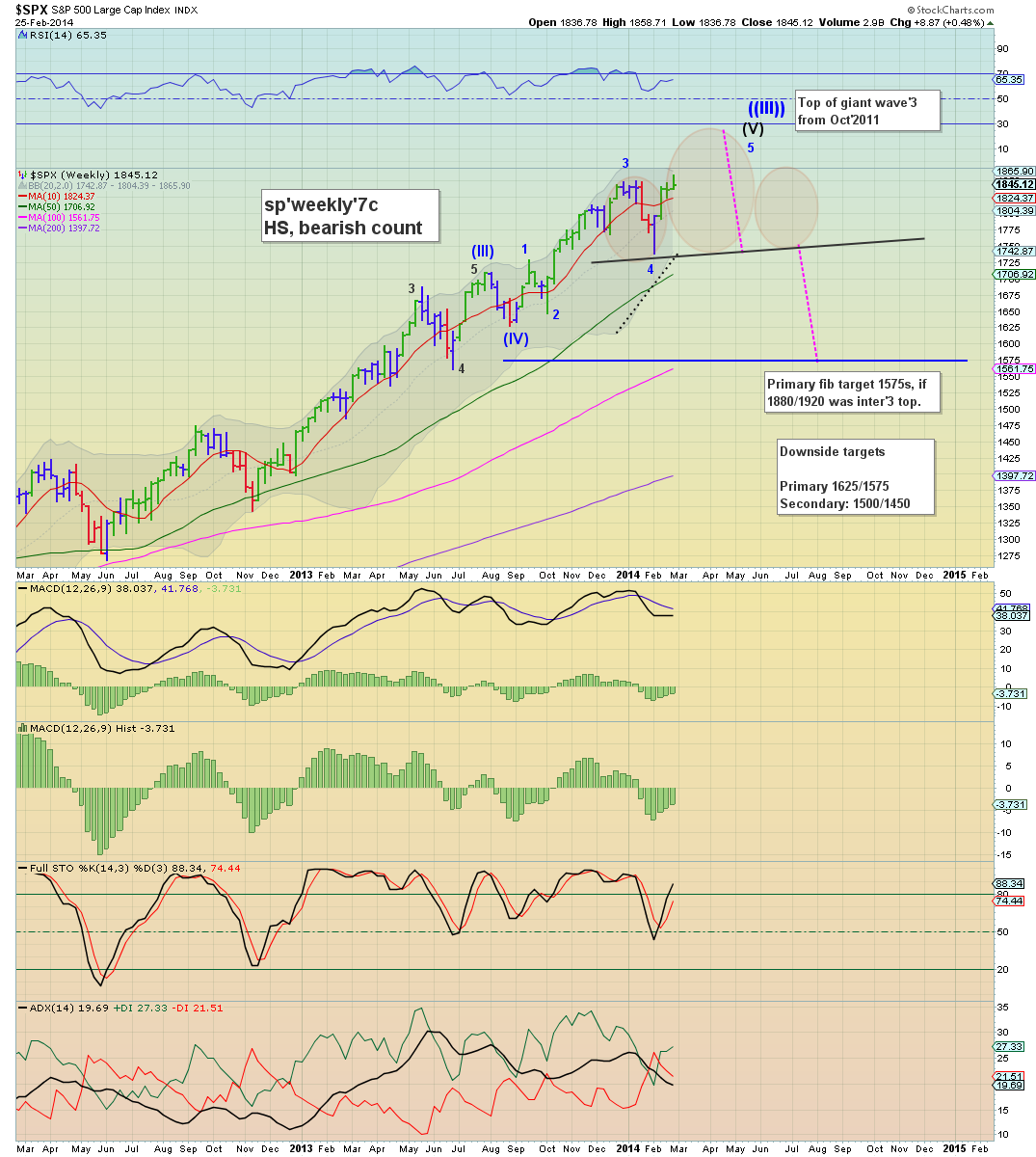 Indeed, we've now seen a disturbing 29 months of almost straight up equity price action. The market has periodically teased the bears..only to whipsaw the market higher. Of course, with the QE-pomo, there has been a very strong underlying bid to the market, and as I noted to someone yesterday, I'd guess the QE accounts for at least 70/80% of the gains since late 2011.

re: chart 7c - it remains the most bearish scenario I dare throw out there. Even if we rollover in late March, with a strong down wave, it won't be until a secondary bounce fails - not likely until early May, that I'll have any real confidence that this scenario is actually playing out.

There really isn't much due tomorrow. There is some home sales data, and the EIA oil report at 10.30am. There are two fed officials on the loose tomorrow (although one is not due until after hours).

*next sig' QE-pomo is not until Thursday
--

Another day closer to spring (as I will probably also note tomorrow), and I'm still waiting. Yours truly has not traded the short side since last summer. The bigger picture has changed in my view, with the 'ultimate doomer' scenario of a move <sp'666 now off the table.

For the regular readers out there, you should remember my 'moon madness' posting from last autumn, where I dared suggest we might never go below sp'1500 again. I have not changed that view, and for those not already aware of it, well... I guess I'll have to go over that again sometime soon.

Anyway, Yellen awaits..not tomorrow..but Thursday. Indeed, Mr Market might well see another day of chop - although hourly index cycles offer upside into the 1860s tomorrow. Regardless, I won't be short, not...quite... yet ;) 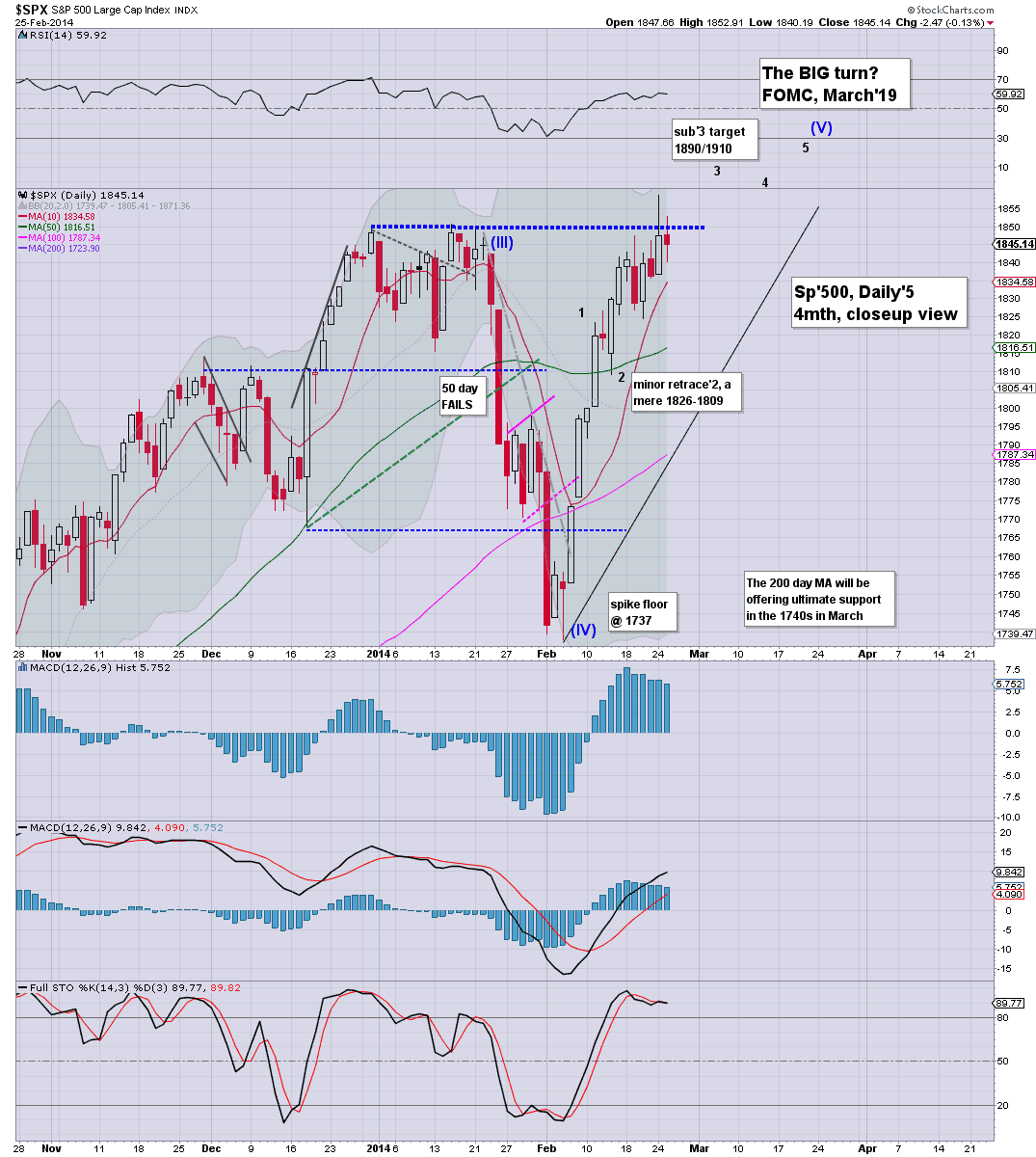 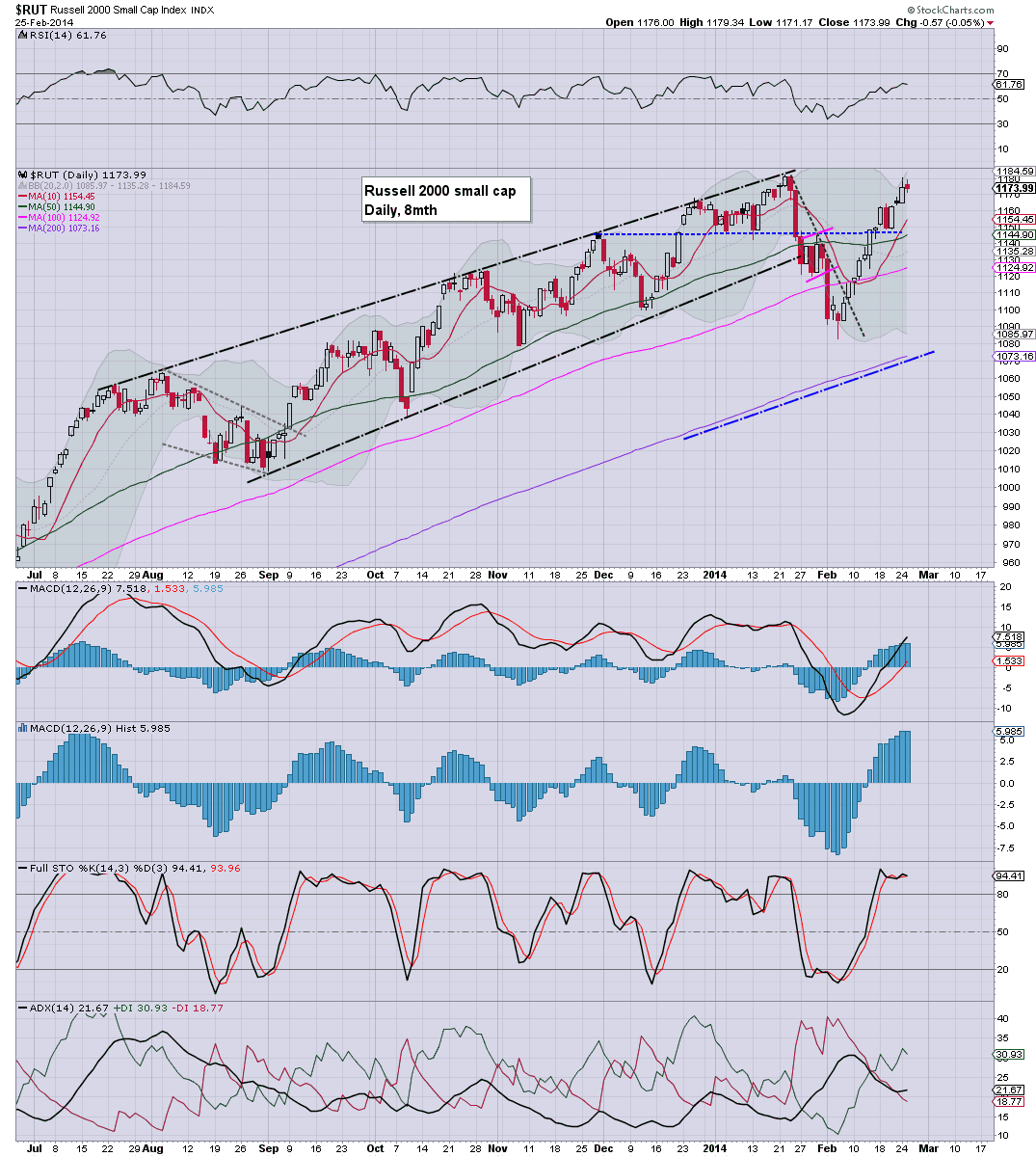 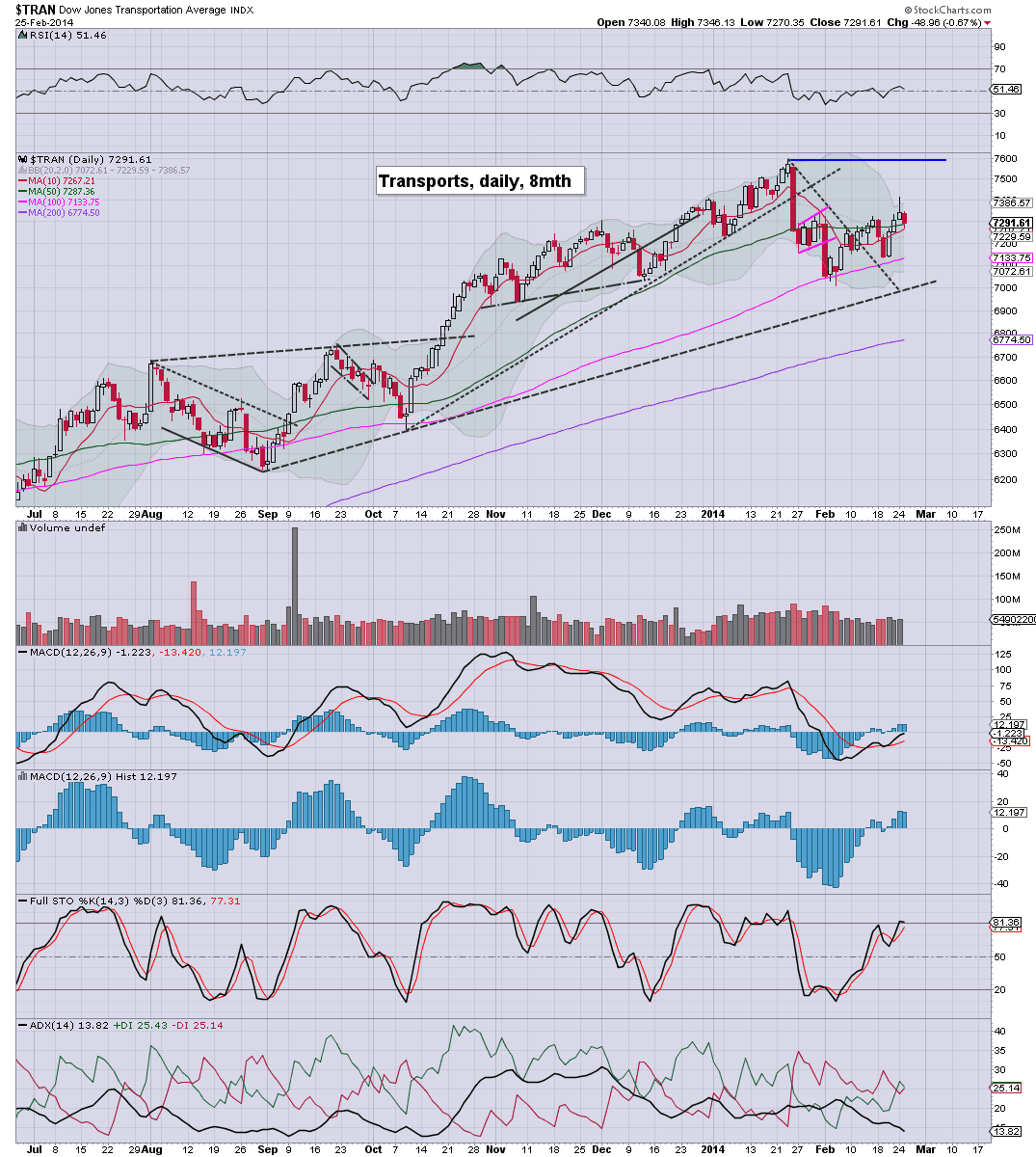 It was a day of minor chop. Certainly, the equity bears can't start proclaiming 'see..the top is in now'. I can only suggest anyone go look at one of the larger weekly cycle charts. The bigger up trend..continues.

Yes, the Dow and the Trans are a bit laggy, but overall..the broader market is still battling broadly higher.
--