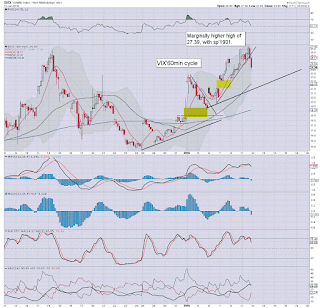 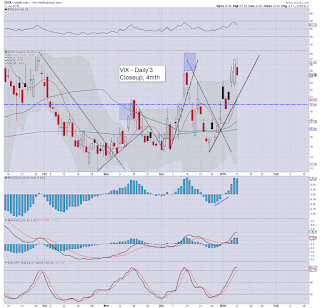 With the sp' close of 1923, there is provisional clarity of a short term floor.

VIX is confirming this, via a very rapid cool down in the late afternoon, from the 27s to 24s.

Seeking broadler VIX upside to the 30s, perhaps the 40s in February.
- 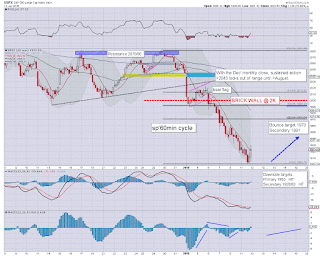 Now its a case of giving the market some days to battle to the 1970s.

*I'll have to give extra focus to the daily MACD cycles.. which could fail to break back above the zero threshold next week.

**to those who went long.... enjoy the ride. I'm content to just watch and wait for the next short opportunity.

How many times have I listened to this whilst going on the London underground transit system? A great many indeed.

more later.... on the VIX
Posted by Trading Sunset at 21:01:00
Email ThisBlogThis!Share to TwitterShare to FacebookShare to Pinterest 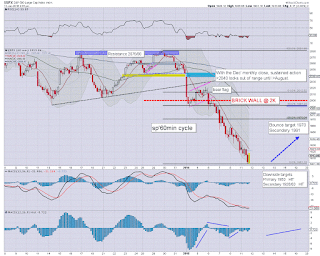 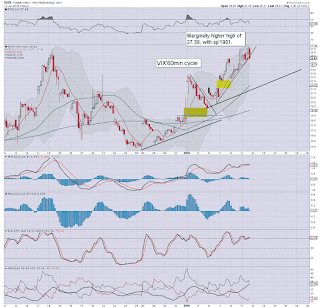 Suffice to add.... it would seem the 1920/00 zone will hold...  with Fed official Lockhart having 'inspired' a rally to begin in the 2pm turn hour.

Bowie was a big part of my younger years, so many great tracks... impossible to call 'absolute beginners' my favourite... I can't say one song is any better than over a hundred others.

I sure feel somewhat older today.

I was certainly overly twitchy on my exit this morning... but a gain is a gain.. so no whining from me.

sp' 1923....  a full 1.1% from the earlier low.
Posted by Trading Sunset at 19:52:00
Email ThisBlogThis!Share to TwitterShare to FacebookShare to Pinterest

The broader market is now significantly lower, with notable weakness in the second market leader - R2K, which has broken below the Oct'2014 low of 1040. Next support is the 1010/1000 zone. Broadly.. the 800s look due in the weeks/months ahead. 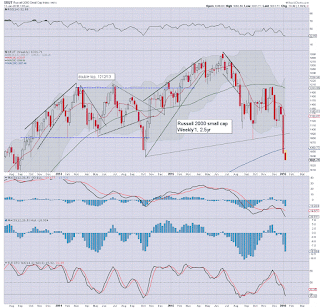 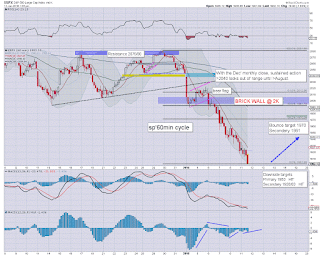 *thanks for the reminder on the R2K, from poster Hawkward. Hard to keep up with every index.. all of the time!
--

So.. R2K is now confirming what the Transports did last August.

Yes... the fib' retrace/bounce targets will keep getting downgraded until 'morale improves'.. or something like that.

re: sp' hourly. Note the powerful resistance of the 10MA. Until we see a few candles over that.. there is no clarity of a bounce.
--

Attempting to play bounces is fraught with problems as the bigger weekly/monthly cycles are outright bearish.

Sure I'm not short the market right now, but I ain't losing money trying to trade long from the 1920s, 10s, or lower. I'd rather wait for an equity bounce to play out. Right now.. that doesn't look likely to complete until well into next Tue/Wed'
- 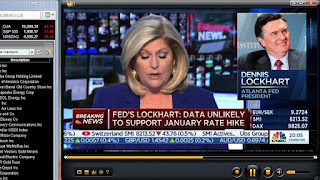 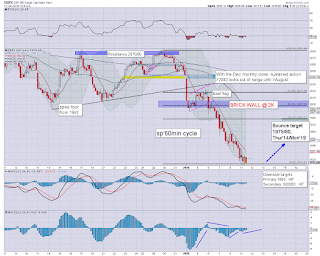 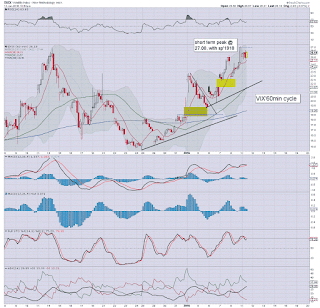 *I have not mentioned it today (and I'm guessing many have noticed it anyway), but despite a marginal new equity low... the VIX did NOT break a new cycle high.

.. and that does not bode well for equity bears who are intending to hold short the market across this week.
--

Holding to outlook of an upside bounce... despite the current price action not looking so great.
--


As for 'excuses', equity bears/VIX longs, can have NO excuse for any whining later this week if we're climbing into opex.

US equities break a new cycle low of sp'1913, but the equity bears still look exhausted, and a sig' bounce looks due. Oil sure isn't helping market mood, having broken a new low of $31.55, next soft support is the $30 threshold, and then $25.. the latter of which looks a given. 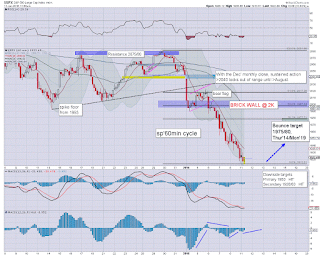 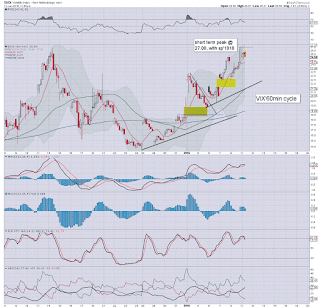 Those equity bears bravely holding across the weekend have had a prime opportunity to exit this morning, as the hourly/daily cycles are threatening a bounce that could easily stretch into early next week.

First upside target is the 1975/80 zone. At best equity bulls might test the giant 2K threshold, but they will not break/hold above it.

The next trade should (in theory) be kinda straight forward. 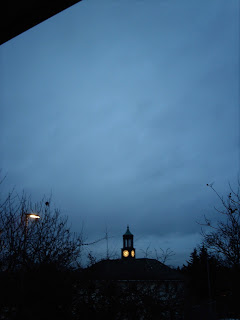 Grey, chilly, kinda horrible, with threat of snow later this week. Is snow bullish or bearish for the UK economy?
--

-
time for tea
Posted by Trading Sunset at 16:51:00
Email ThisBlogThis!Share to TwitterShare to FacebookShare to Pinterest

11am update - choppy, and bearishly tired

US equities are certainly not showing much upside kick, but neither do the bears look remotely able to break below the original target zone of sp'1920/00. A bounce to the 1980/90 zone looks probable... and that will at least take until Thursday.. if not into next week. 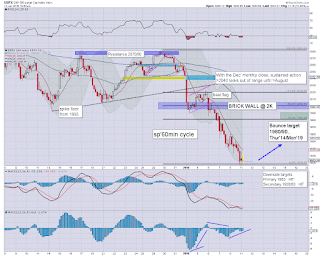 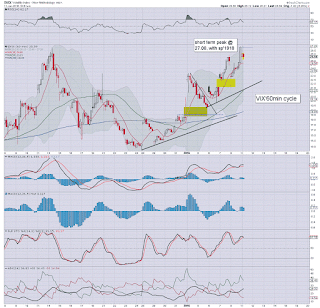 It sure is choppy, and no... I'm not expecting a sig' net Monday gain.

However.. the situation doesn't look great for the bears, and I'm increasingly glad I made a run for the exit door.

-
*I have ZERO interest in trying to trade the upside bounces. I realise some of you can... but I shall refrain from that. Instead, its sit back and wait...for the 1980/90 zone.

Nothing has changed.. still expecting a bounce.

Anyone still short is arguably getting a bonus opportunity to close out... or at least tighten stops.
- 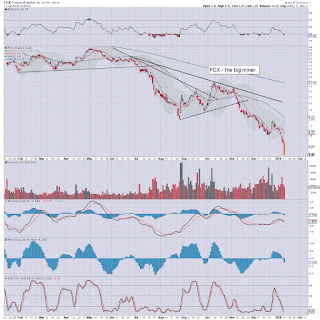 Mr Market is clearly starting to consider that FCX might 'disappear'.
-

Again, the risk still appears against the equity bears.. from a pure cyclical perspective.

.. and its typical floor time anyway.   When are the buy programs going to start appearing?
-

Today was very likely a bonus opp' for bears to exit.. and wait for a sig' bounce.
Posted by Trading Sunset at 15:53:00
Email ThisBlogThis!Share to TwitterShare to FacebookShare to Pinterest

10am update - cyclically due to rally

From a pure cyclical perspective, equities are set to rally for a few days. Considering opex is this Friday, there is clear threat of the market battling at least to the 1980s. However, sustained action above the 2K threshold looks out of range. 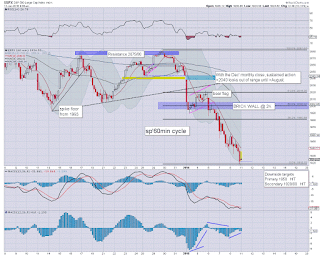 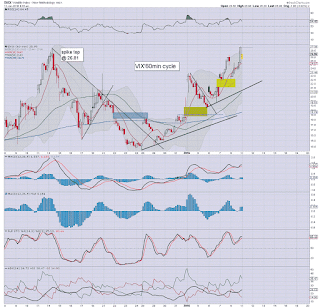 *I EXITED TVIX-long, as the micro 5/15 min cycles look highly vulnerable to turning lower.. as equities are threatening upside.. with VIX cooling back under the 20 threshold.
-

A disappointing overnight session, with equities rebounding - despite China imploding by another -5%.


Just so there is no misunderstanding...

I have ZERO interest in trying to trade any equity bounces. I'd rather sit back, and wait for a better short entry.

If the market resumes falling without me... so be it.
-

With each minute of price action.. it sure doesn't look bullish... but neither does it merit being short... at least to me.

It'll be a tough battle to push upward - as weekly/monthly cycles are hugely bearish.. but we should get there.

Eyes on the VIX.. a daily close in the 24/23s looks possible now.
Posted by Trading Sunset at 14:51:00
Email ThisBlogThis!Share to TwitterShare to FacebookShare to Pinterest 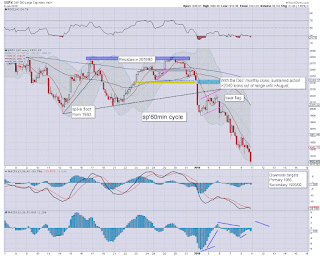 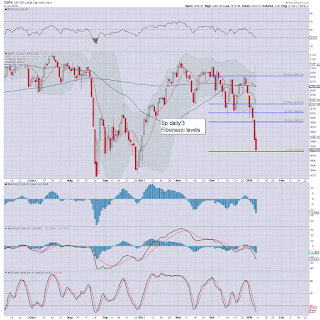 We're clearly seeing the first attempt to clarify that 1920/00 zone is a short term floor.

There is NO question though, broadly.. we're headed much lower in the weeks and months ahead. The sp'1650/1550 zone looks extremely probable by May/June.

For now... there is clearly threat that an overnight ES low is in at 1893.

I'd argue it is overly risky a bounce to play.. as we might simply resume falling later today though.
--

Best guess... the cash market to test the overnight low in the 1905/00 zone... and then a bounce into opex, and probably a week beyond.

Sustained action above the monthly 10MA (2030s) and indeed, the sp'2K threshold looks out of range for at least EIGHT months.

As ever, make of that, what you will. I still think the gold bugs are yet to capitulate... and the notion of a USD collapse is ludicrous. Would you rather hold Euros or Yen? Of course, in the minds of Gold bugs, we will all be shopping at Walmart with gold/silver coins in our pockets. There is higher probability of me winning the powerball each week for a year.
---

Good wishes for the trading week ahead
-

Indexes look vulnerable to turning red later today.  For the moment, there is ZERO reason - other than technical, to expect a bounce.

--
Oil remains a problem for the equity bulls... the loss of the $30 threshold looks a given.. just a matter of in this cycle.. or the next.

*the fact the market was unable to rally on 'good jobs news' remains a pretty bearish event.