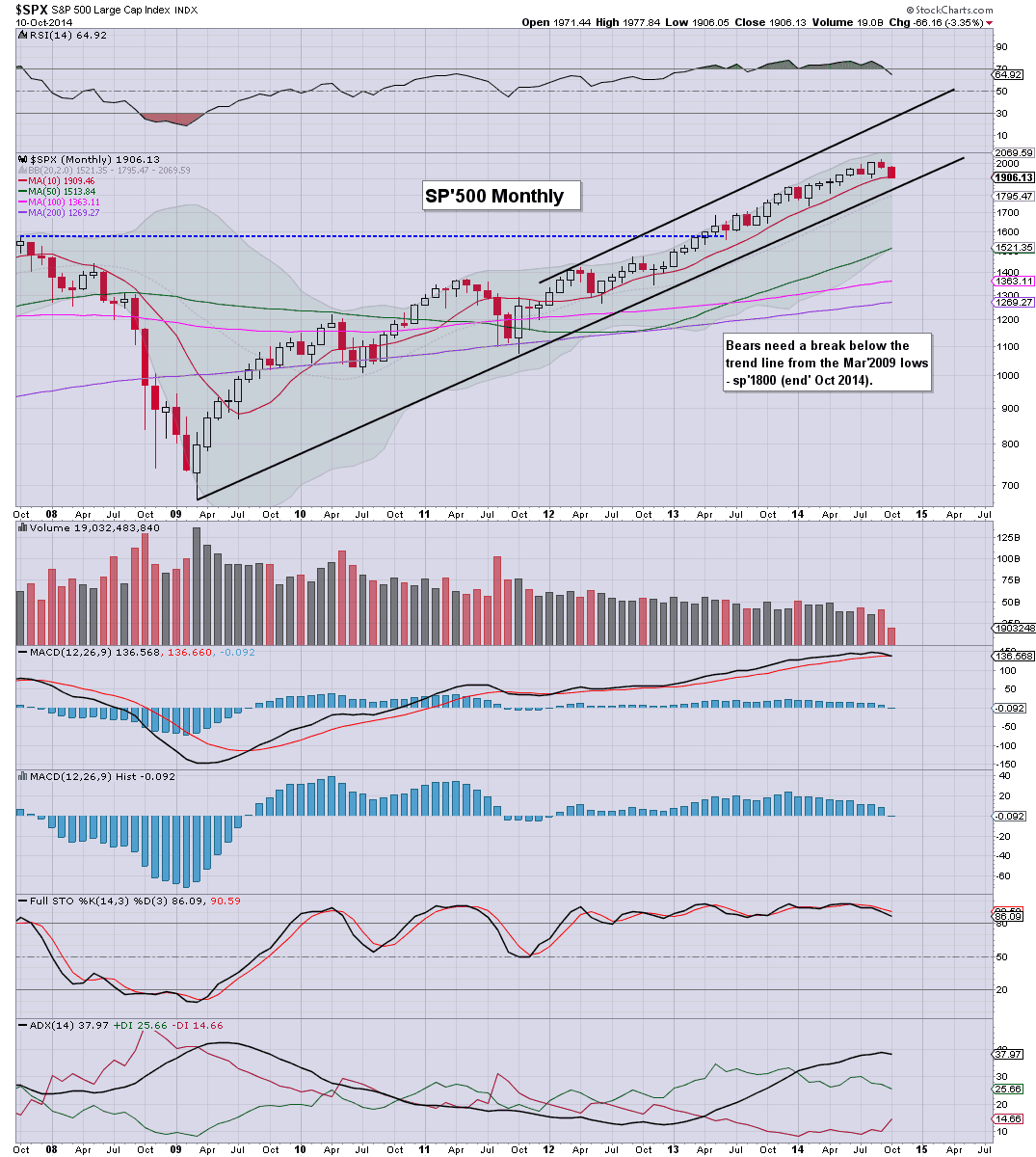 September only closed a touch net lower, but with the move down to sp'1906, we now have a bearish MACD cross... and are negative cycle for the time since January 2012. Indeed, as of the Friday close, the sp'500 joins the R2K, Dow, and NYSE Comp' at MARCON 6.

Key rising support from the 2009 low is around 1825. With the recent style of price action, a sustained break below 1900 (after a latter half October bounce) seems likely in November. If a H/S scenario, target zone is 1780/60. 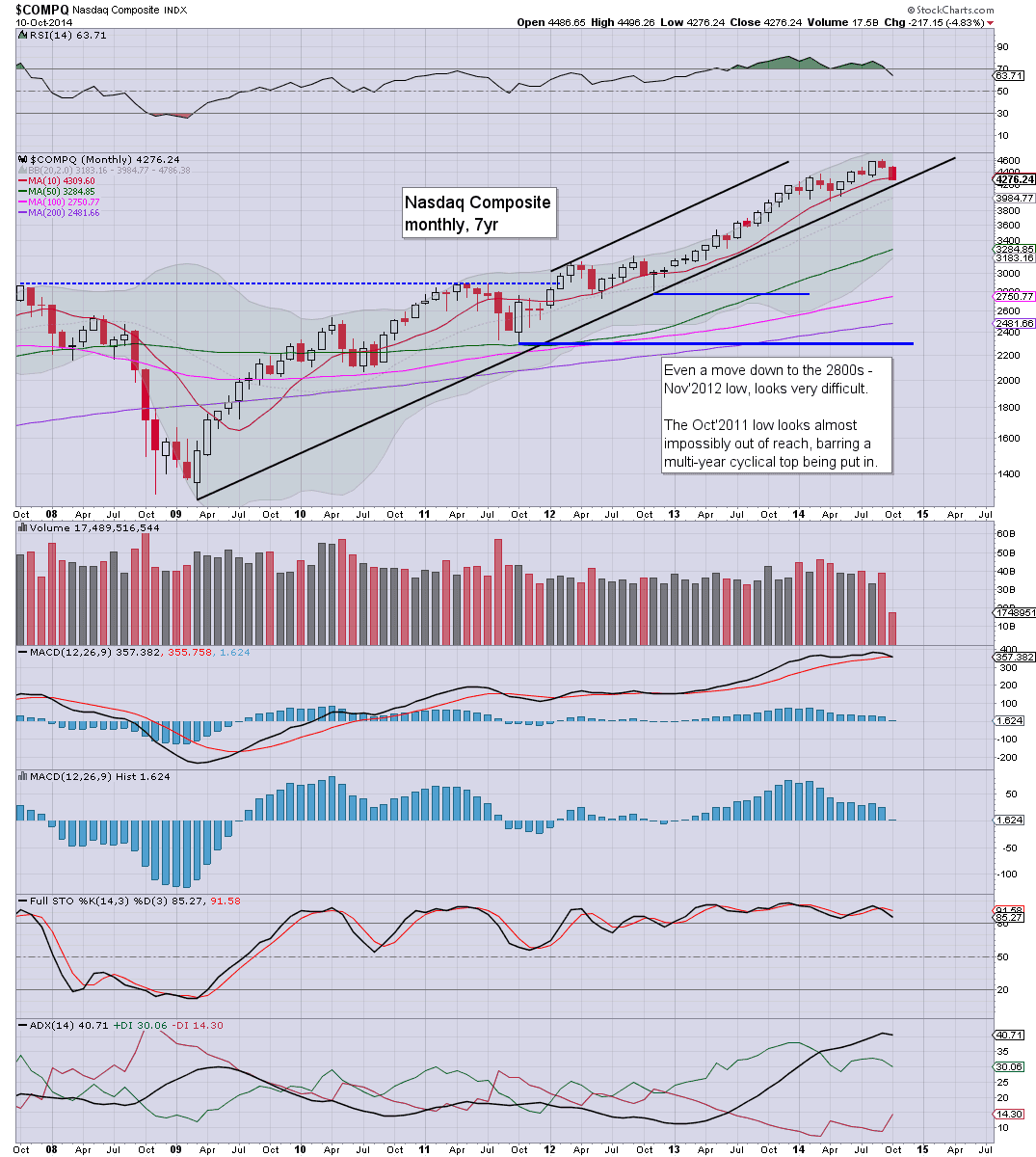 The tech is especially suffering this past week, and is currently down a very significant -4.8%. Next key level is the giant 4k threshold. If that fails (as I expect).. primary target would be around 3500/3400. 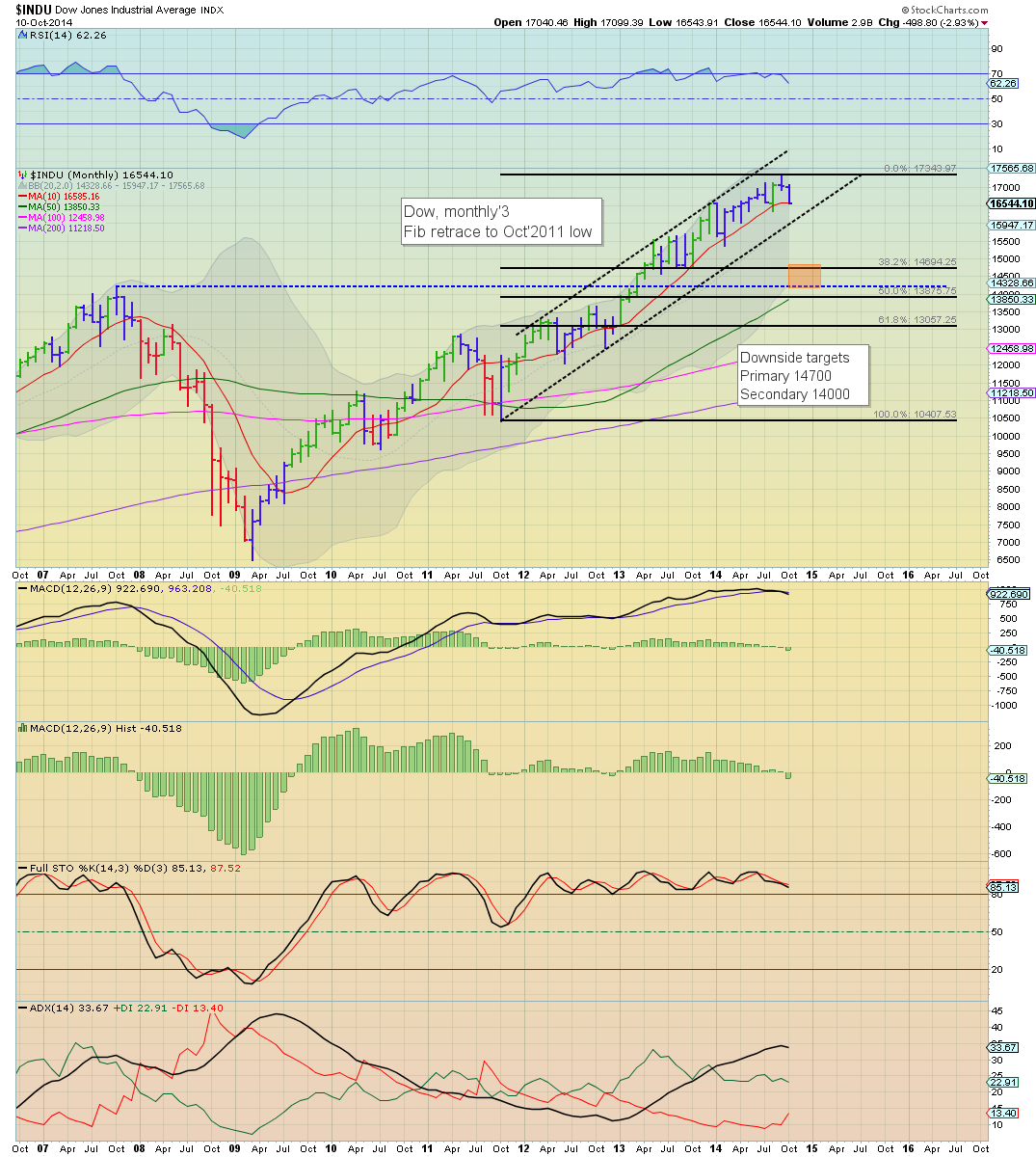 Even the mighty Dow is lower by almost -3% so far this month, and looks set for significantly lower levels this autumn. First key target zone is 15000/14700. A break <14k looks highly unlikely.. no matter how rattled the market might get. 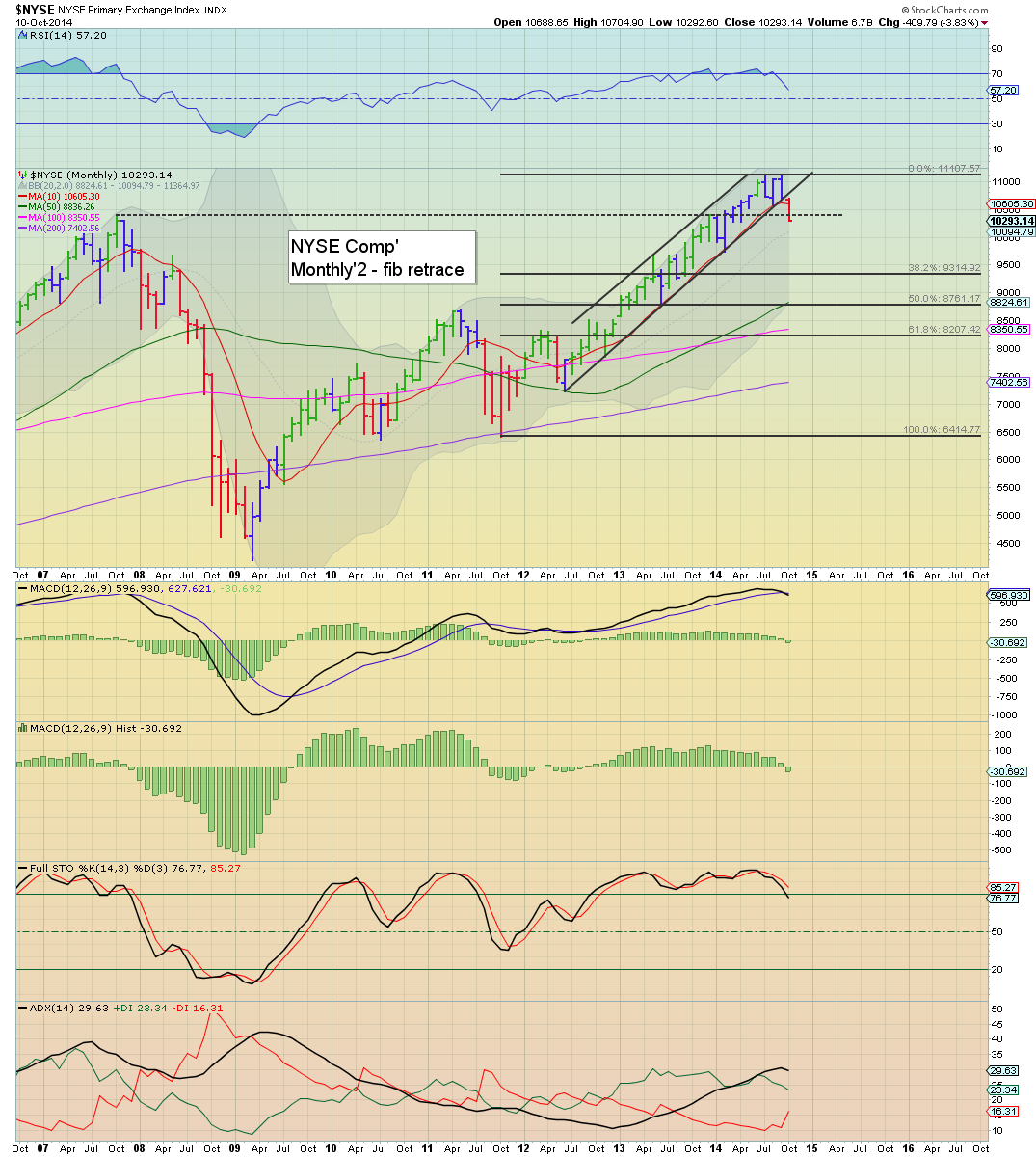 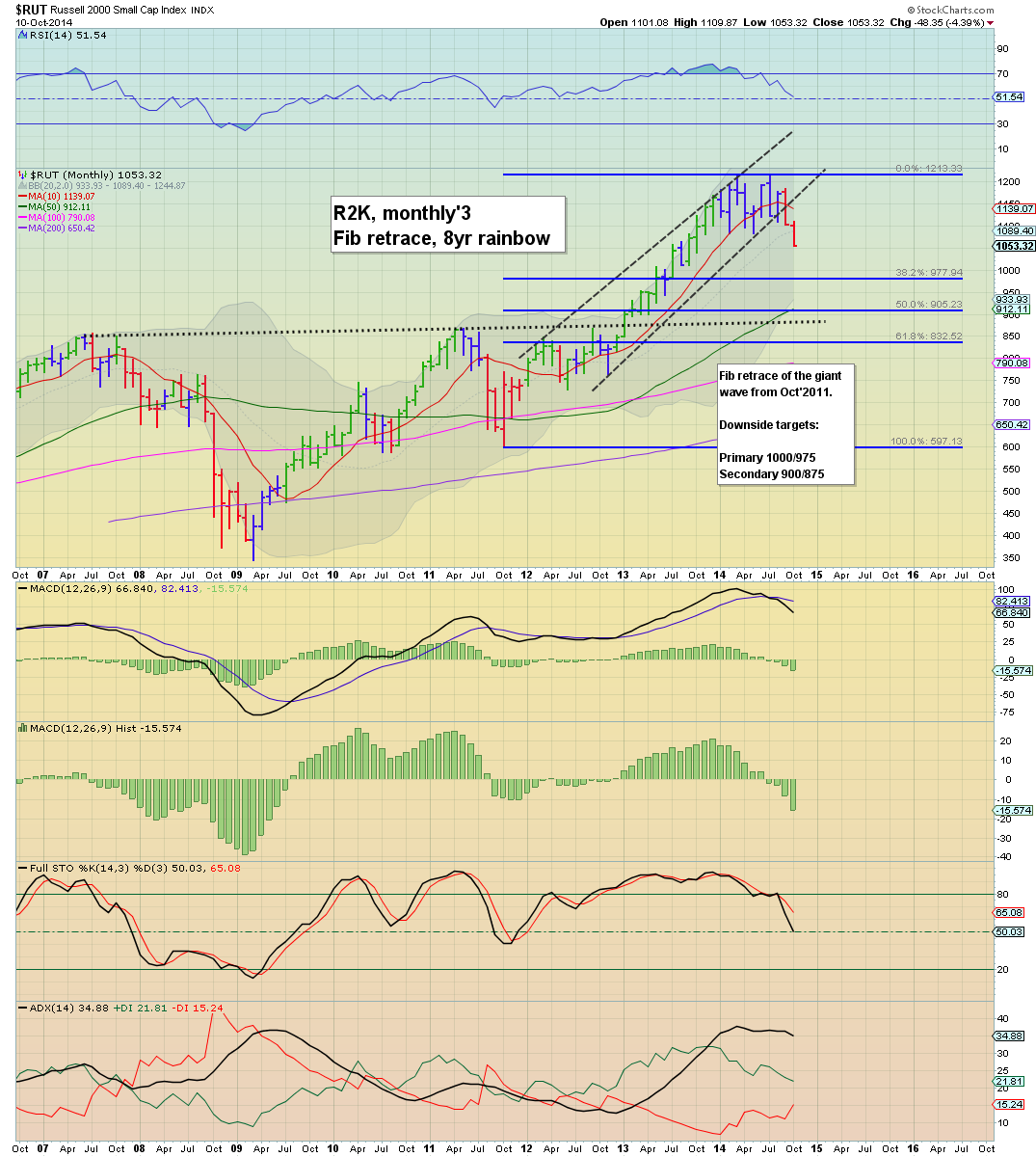 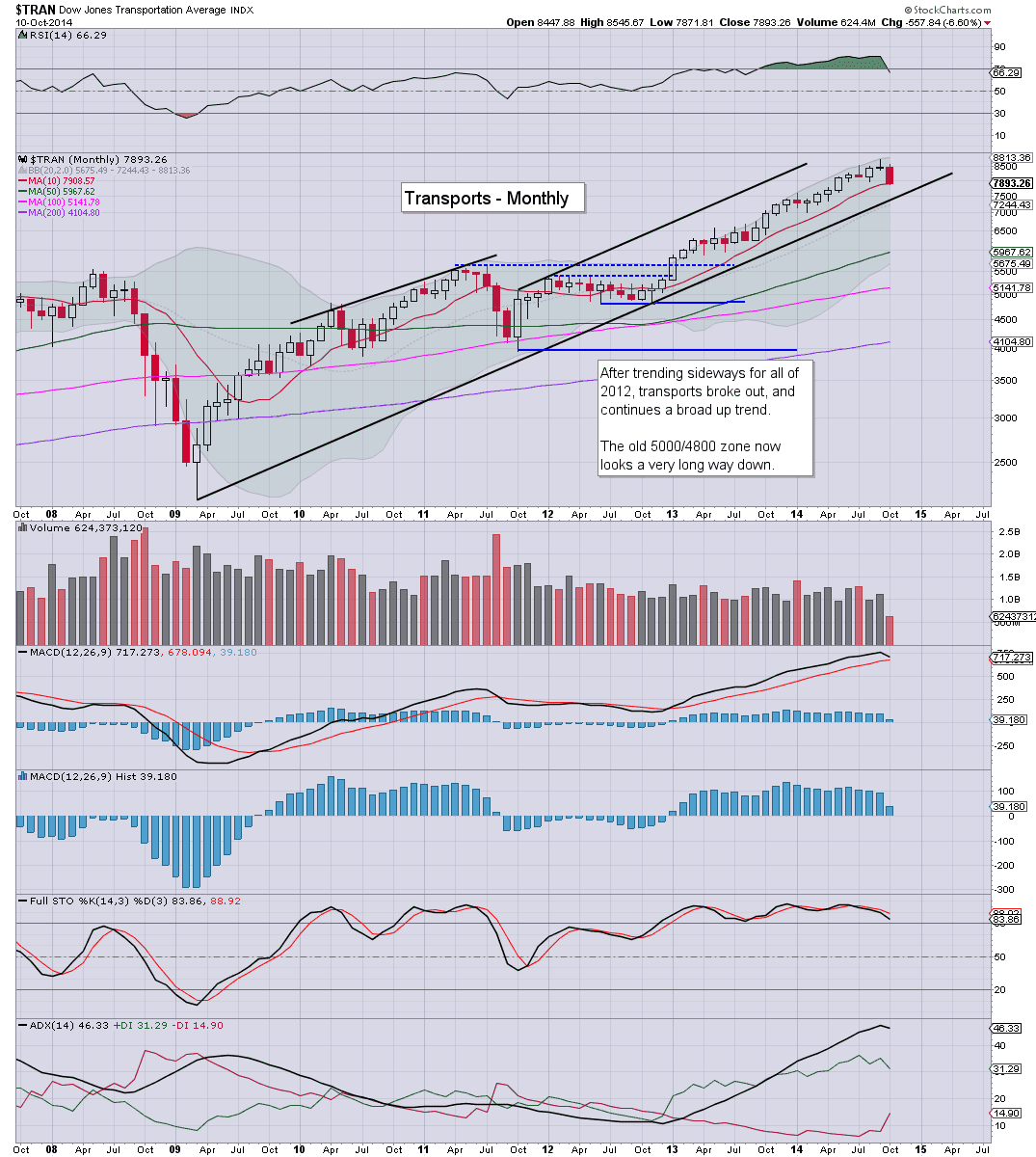 So far this month, the 'old leader' - Transports, is lower by a somewhat severe -6.6% @ 7893. A bearish MACD cross looks a given in November. First target is 7k. Ultimate best downside case for the equity bears is 6k. On no outlook do I see any sustained trading in the 5000s.

Without question, something new is going on. We have very significant bearish crosses on 4 of the 6 main indexes I regularly highlight. The last time we saw this type of event was in summer 2011.. where the broader market saw a fall of almost 20%.

Most of the mainstream are still only moderately open to even a 10% correction, never mind anything close to summer 2011. How are the cheerleaders going to react if we're in the 1700s by late November? Tears and screaming toward Yellen, demanding QE4?

Certainly, if we do trade into the 1700/1600s.. whether late this year or early 2015, I'd have little doubt the Fed will launch yet another QE program. Maybe they might want to start buying up some of that student debt in the next round?

There really isn't much in the way of significant data.

There are a few Fed officials to speak on Monday, but mostly Thursday. 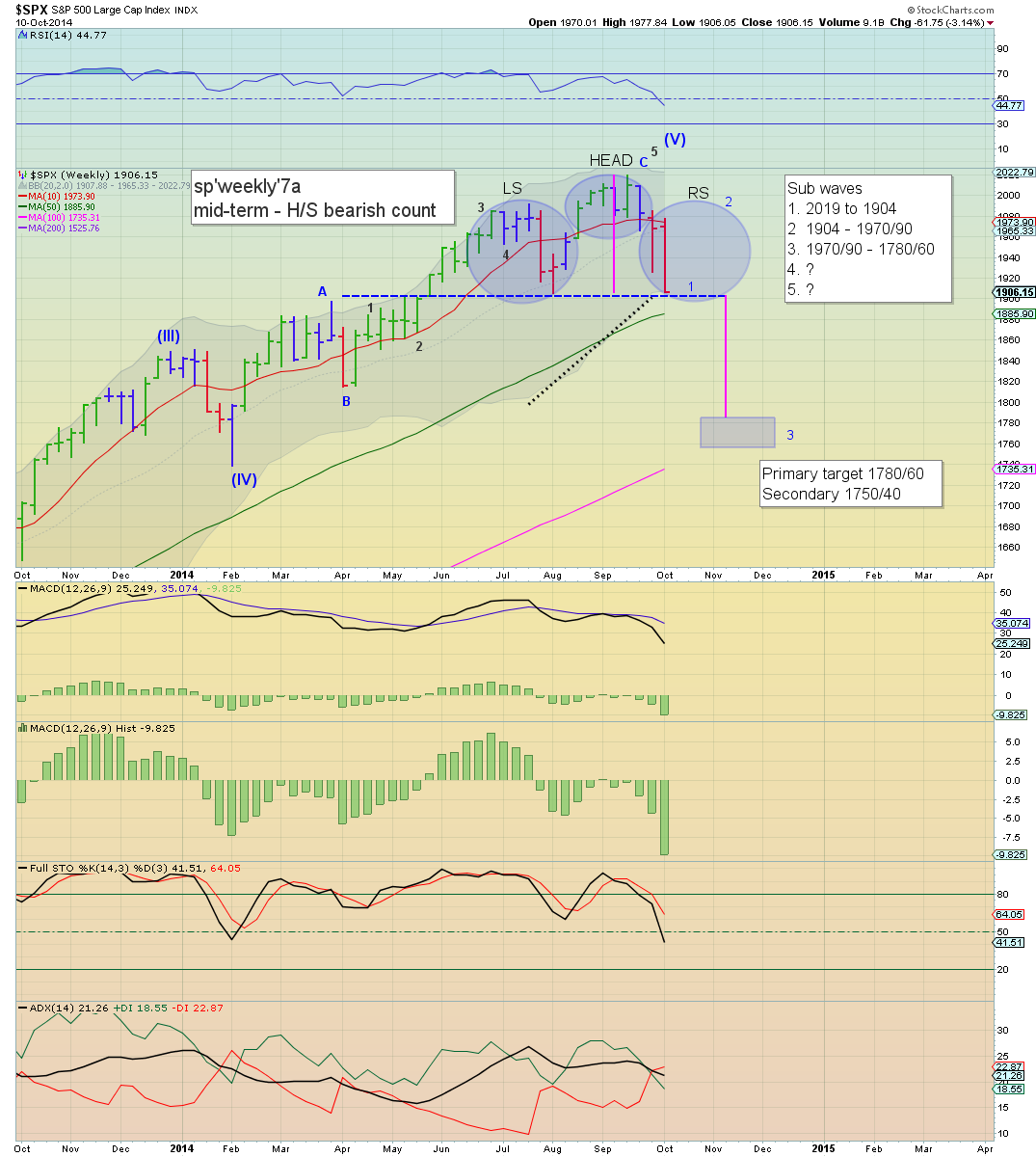 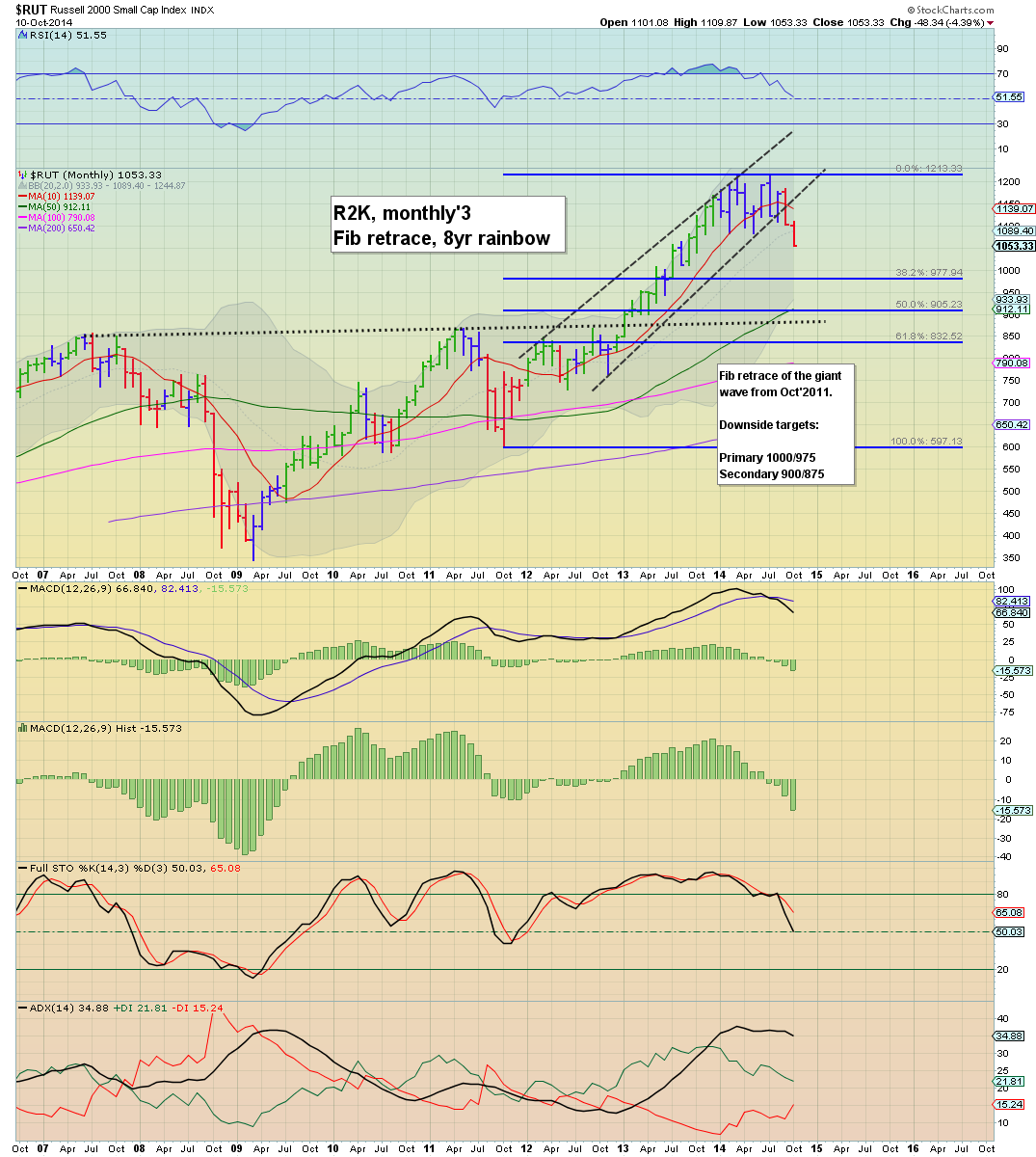 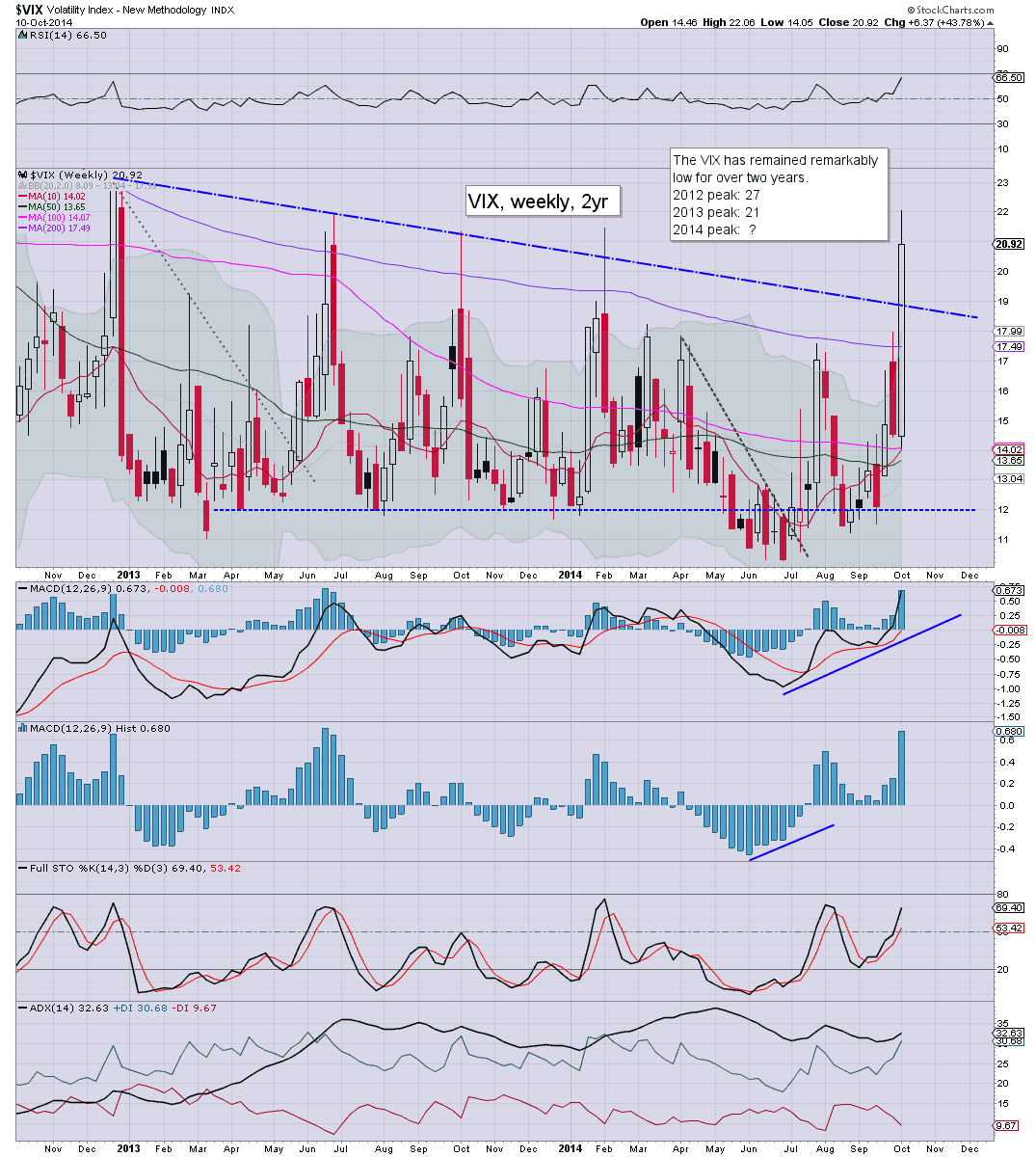 First...a few things I want to remind some of you...

With the failure to break back below sp'1500, In summer 2013 I waved a giant white flag.. and it wasn't until just over two weeks ago that I took my first short-index trade in over a year.

Since the morning of Sept'19th (Alibaba IPO day), when the sp'500 hit 2019.. .we've seen some increasingly wild price action. Not just the occasion 1% swing, but day after day of dynamic moves. As many are starting to also note... 'something new is occurring'.

Dow, negative MACD on the monthly cycle, first time since 2012
Dow, MARCON 6, since this past Monday morning.

*Overall equity price action is different, with increasingly wild swings, and the traditional 'buy the dip' mentality is switching to one of 'sell the rallies'.

I could of course also mention various weak 'macro' data, not least in the EU, but really, I'll leave others to discuss those things right now.

In the meantime however, I've seen more than enough to convince me that we're going to take out the sp'1900 floor... and then quickly fall into the 1700s. That should offer some great short-side trading opportunities, but also an infinitely better buying level.

Goodnight from London... the city of rainbows

--
*the weekend post will be on the US monthly indexes
Posted by Trading Sunset at 04:00:00
Email ThisBlogThis!Share to TwitterShare to FacebookShare to Pinterest 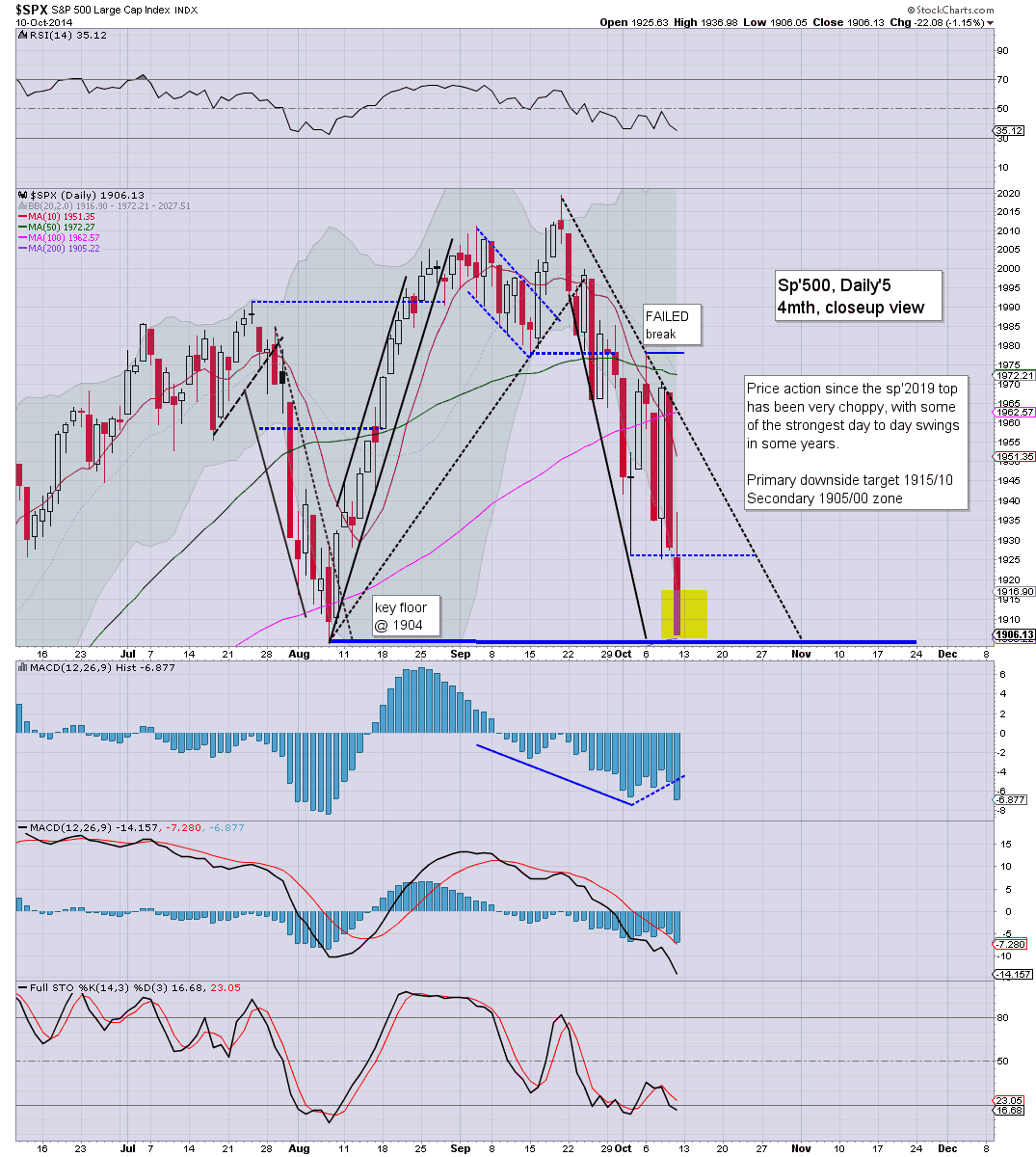 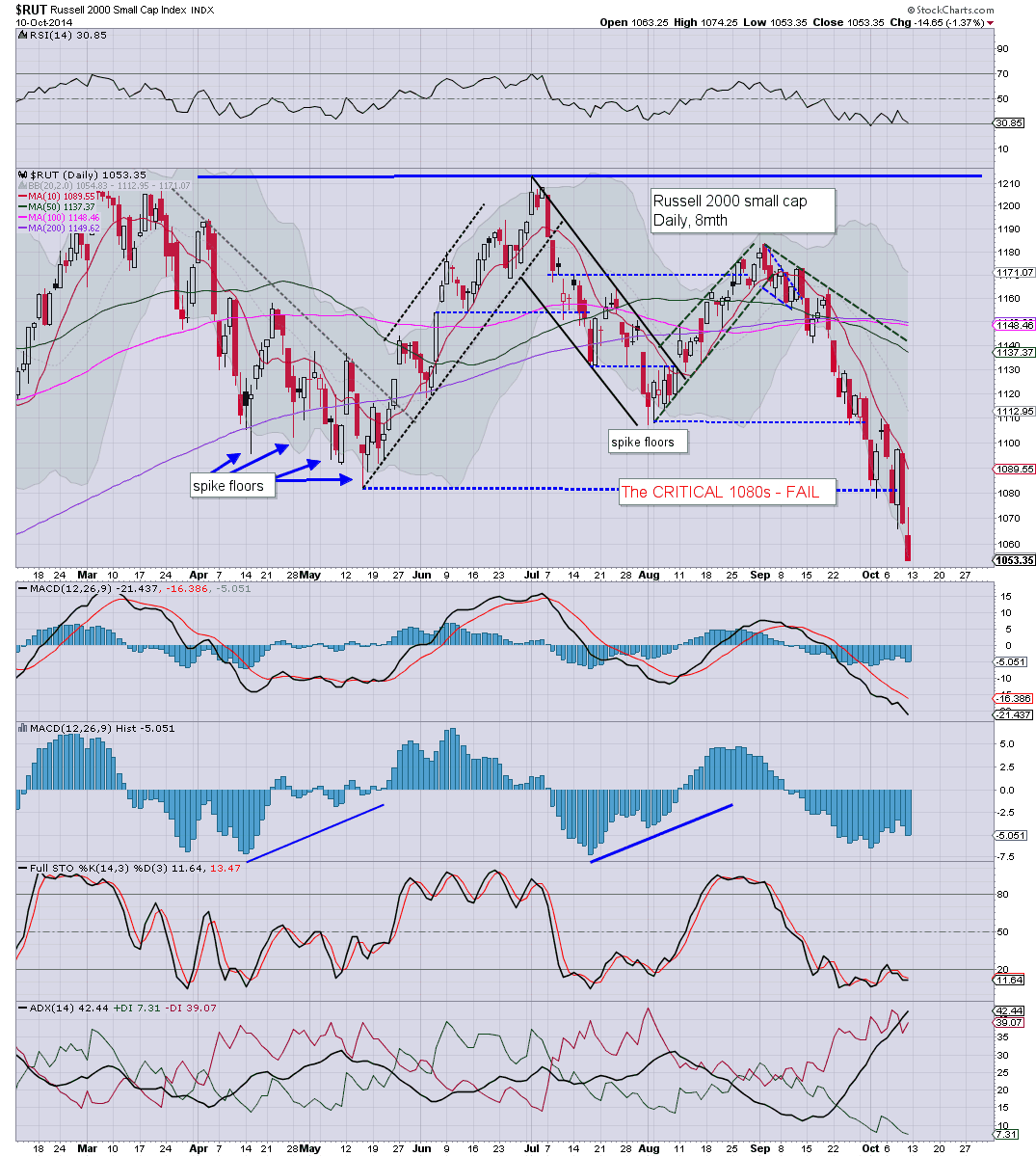 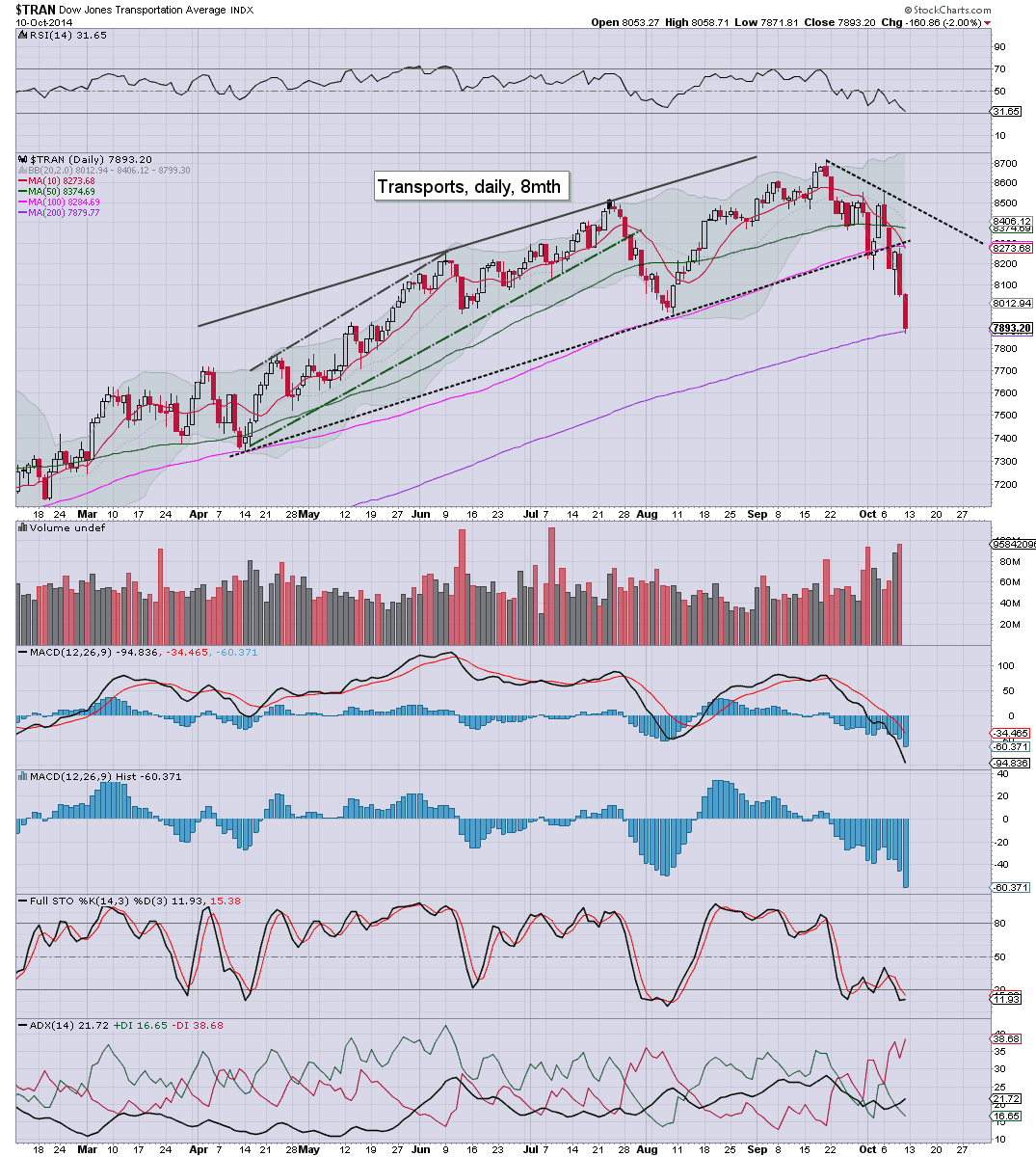 Suffice to say, new lows...  and there is now a huge technical unrecoverable mess for the bull maniacs to deal with.