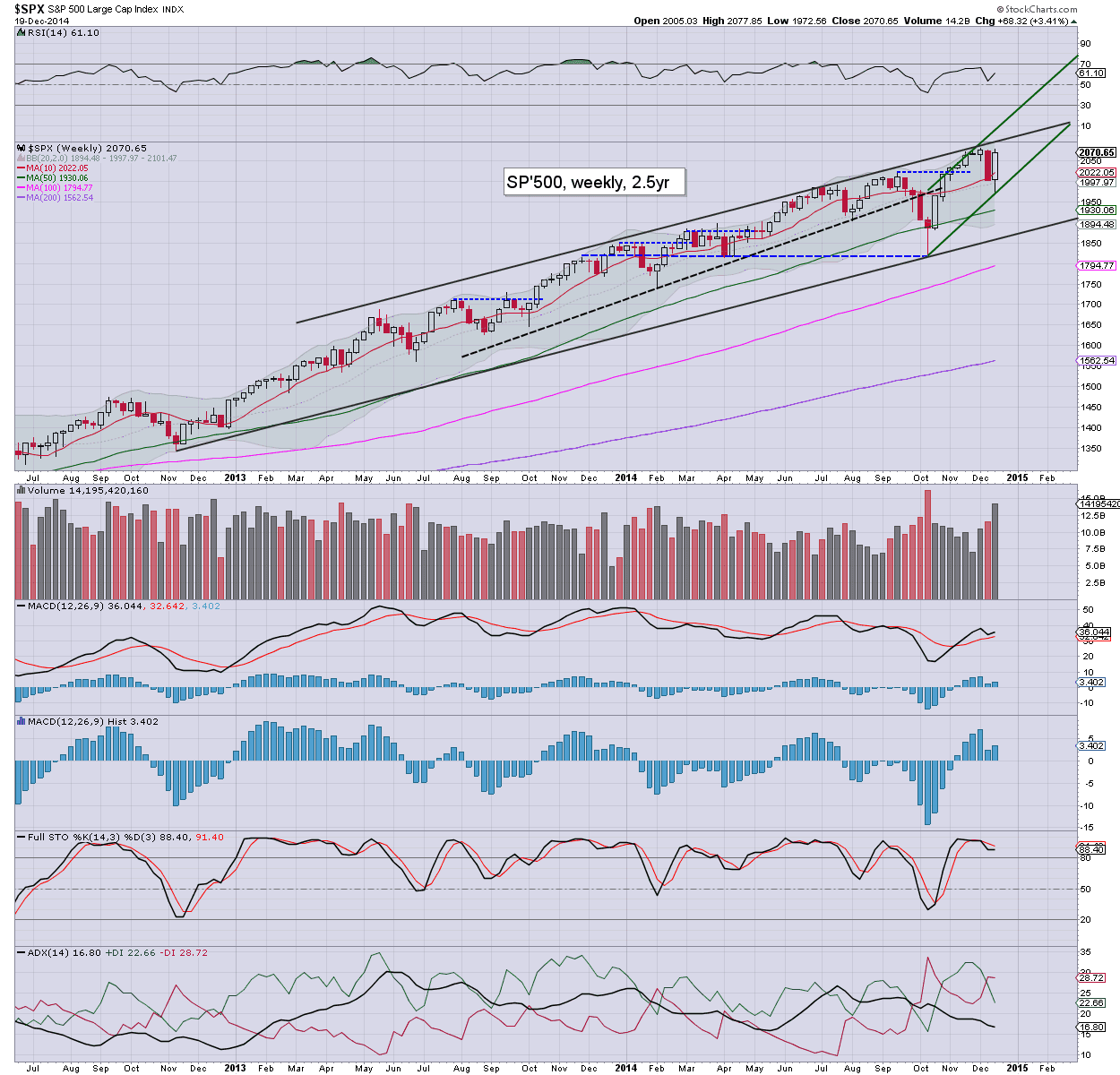 A powerful net weekly gain of 3.4% for the sp'500. What is pretty incredible is seeing a 105pt swing from the Tuesday close of 1972 to the Friday afternoon intra high of 2077.. which itself was a mere 2pts from the recent historic high.

Indeed, we now have a clear cycle floor of 1972.. and we're headed into the 2100s. There now appears a very high probability of a straight run up to the 2300s by April/May. Higher oil prices will no doubt help inspire confidence in both the US and most world markets. 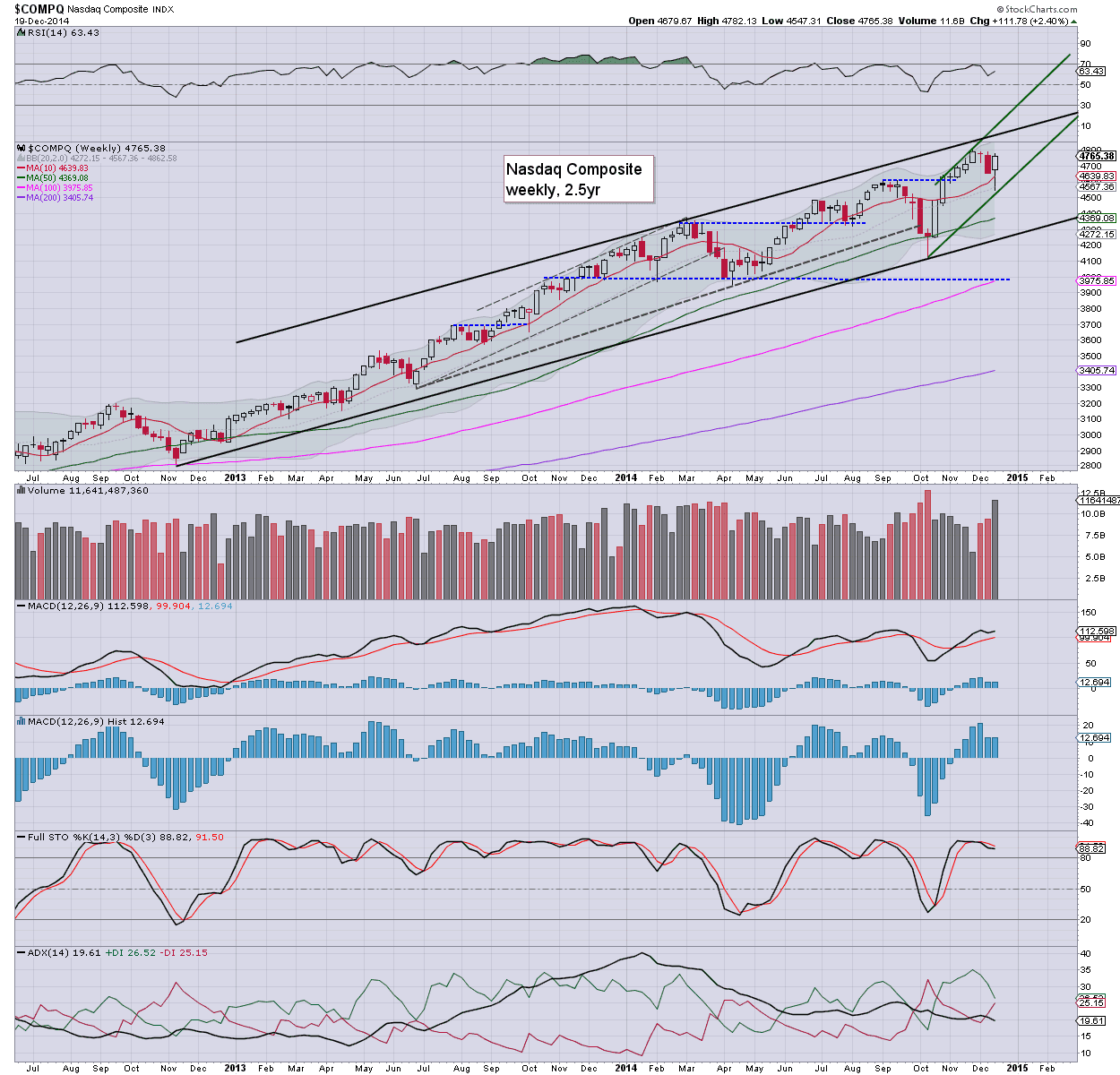 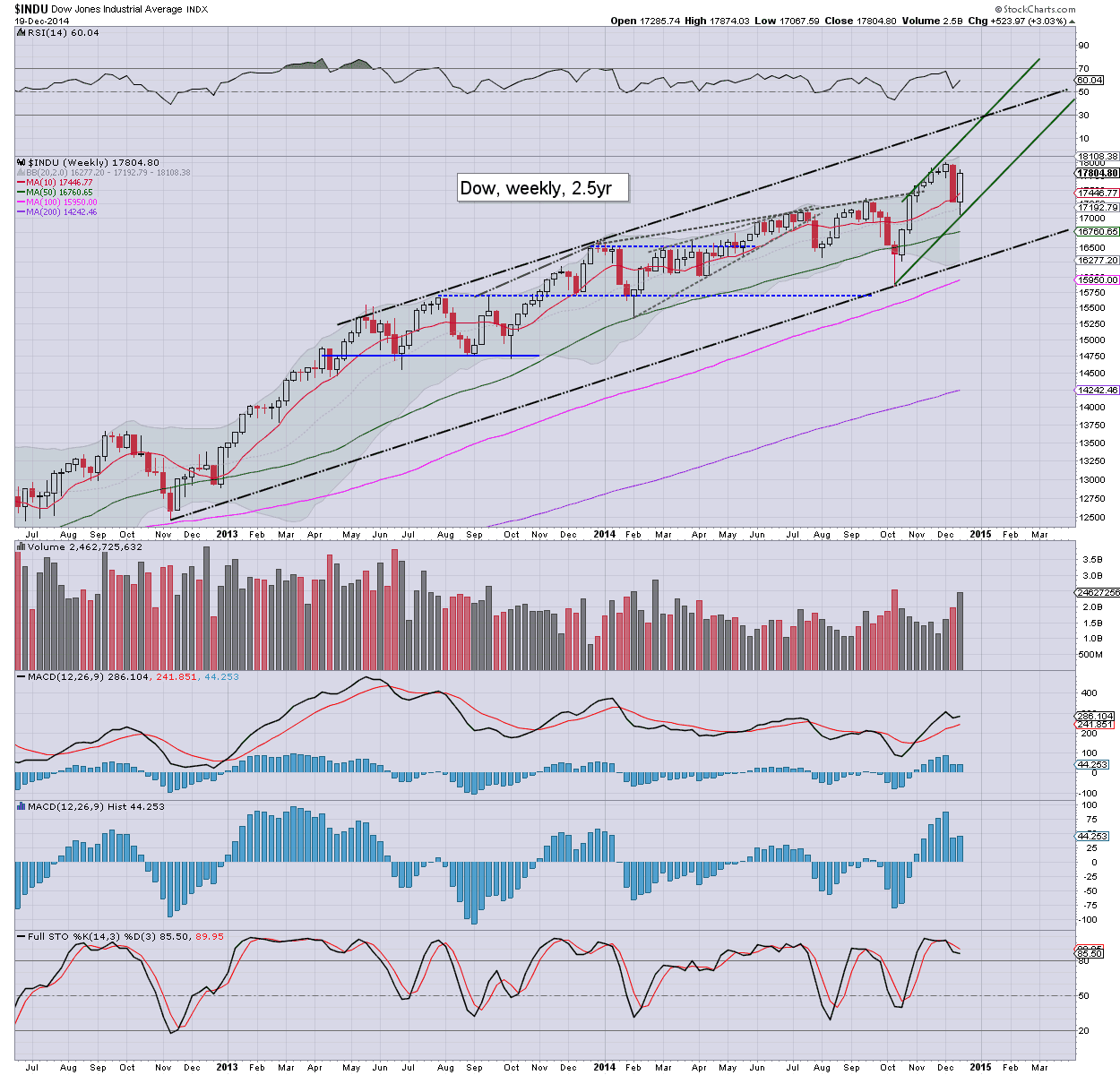 The mighty Dow came very close to breaking the 17k threshold that I was highlighting last week - intra week low 17067, but settling the week up a net 523pts (3.0%). On any basis, this is a huge gain, and again cements 17k as a core support level.

The 18000s are coming.. whether by end year.. or in January.. it should make no difference to anyone on the long side. Next key resistance zone will be around 18250/500 by late Jan/early Feb. However, the big 20k threshold looks a given by late spring. The next 'grand' fib level is 18974.... and if you agree that 20k is likely.. it is arguably important to consider the next fib extrap' is 26702. Clearly, the latter would be called 'crazy talk' right now... but if the market trend accelerates across the first half of 2015, then 26k is viable by early 2016. 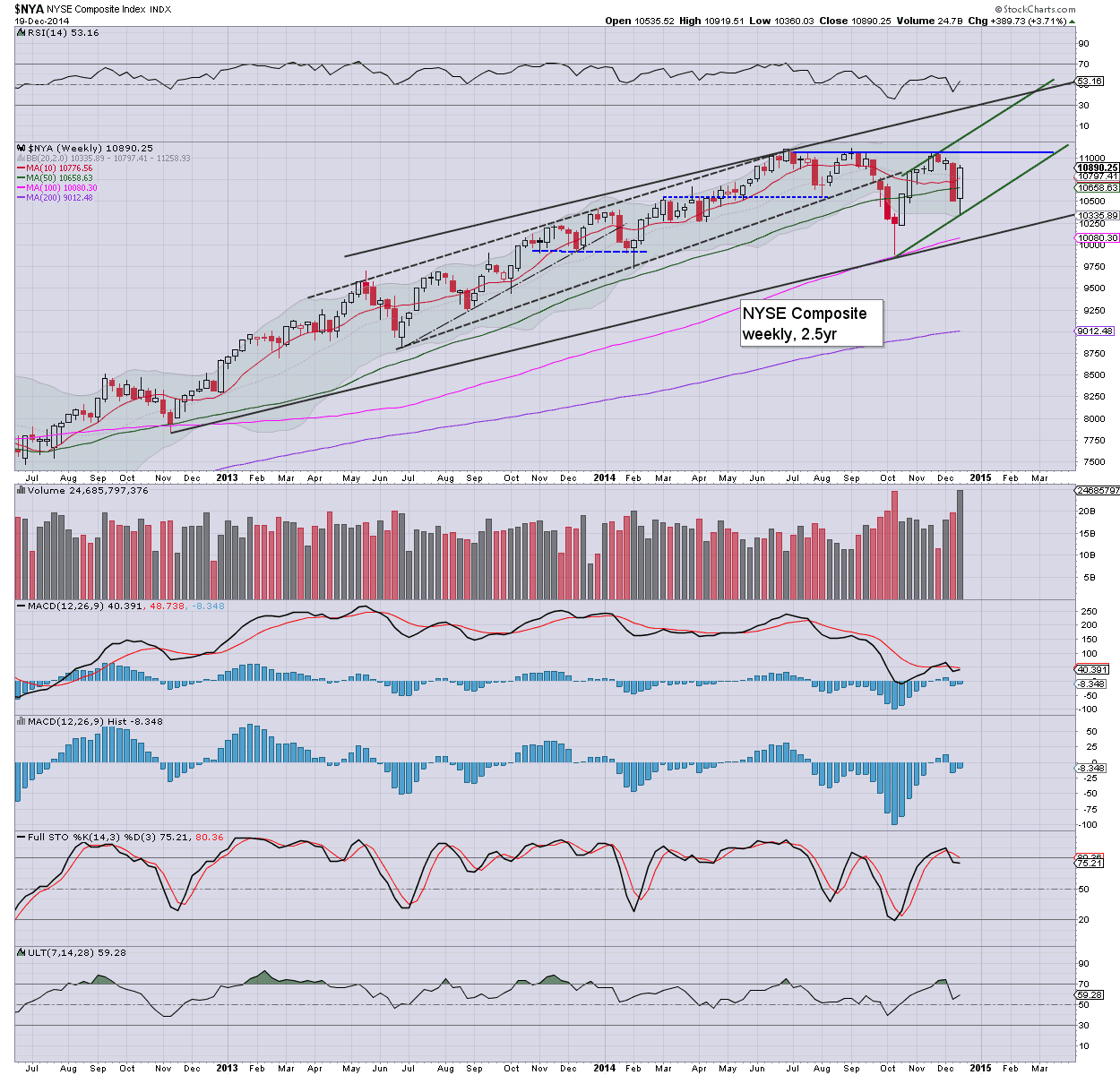 The master index gained 3.7% this week, and (surprisingly) a yearly close in the low 11000s now looks possible. Early target for Jan/Feb is around 11300s.. where we might get stuck, before the next retrace. 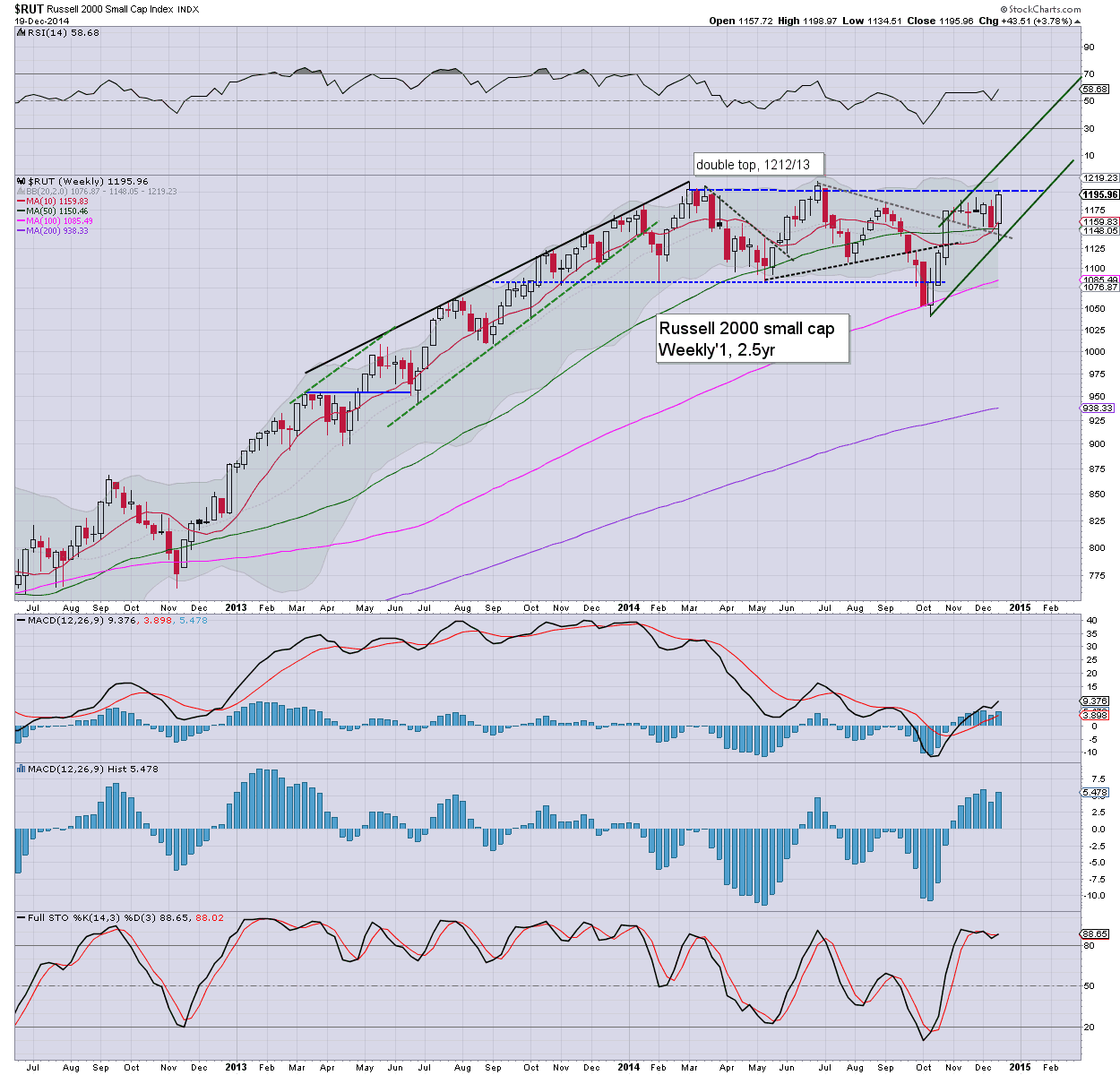 The second market leader was the market leader this week, with a net weekly gain of a very powerful 3.8%. With the 1150 threshold holding, the R2K is now just 18pts shy of the July high of 1213. New historic highs look due.. and once we see a monthly close in the 1220s or higher... it should confirm that much higher levels are due in 2015. The next grand target would be around 1500, but clearly... that is a long way up, and would likely equate to sp'2400/500s. 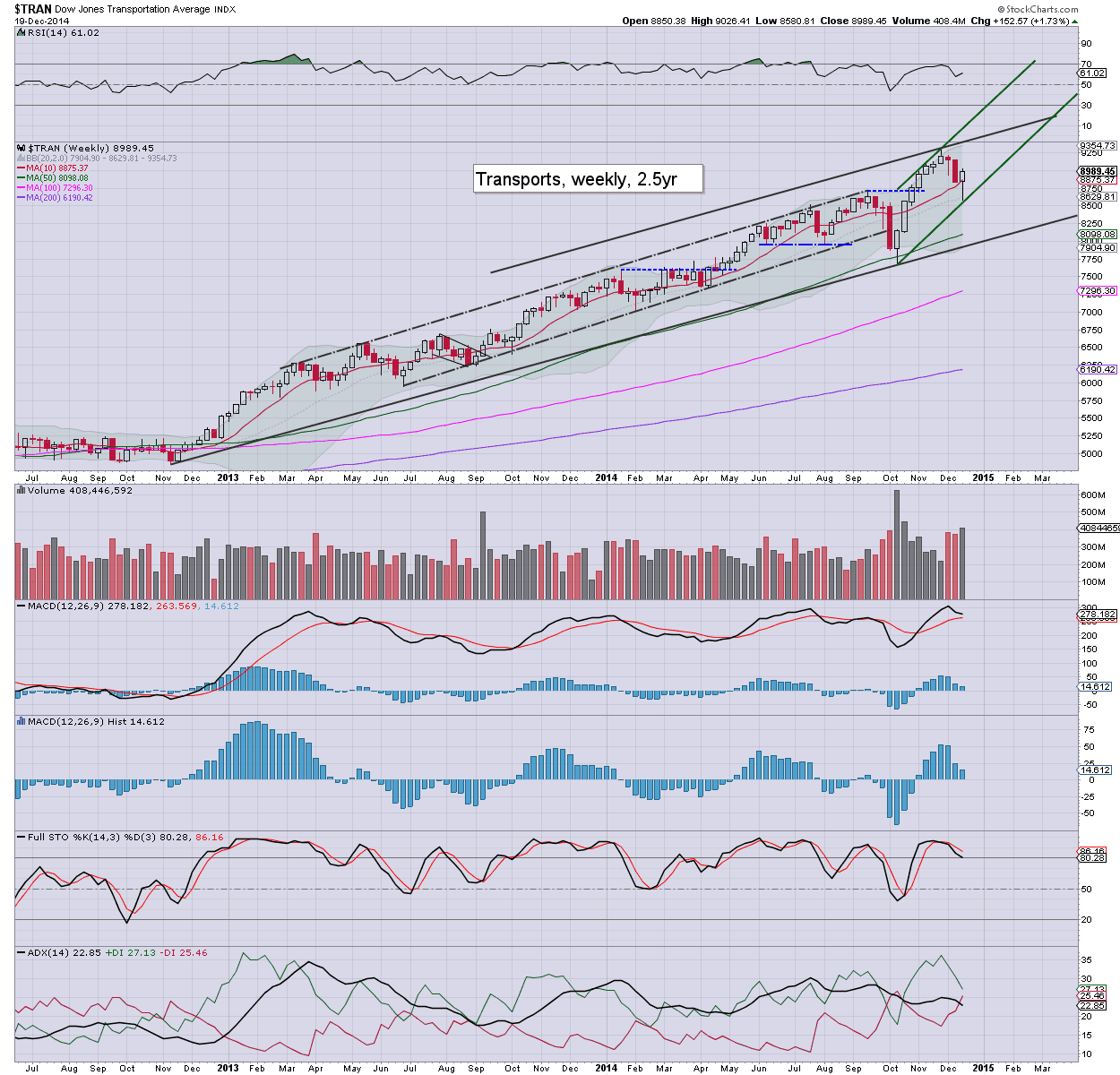 The 'old leader' gained a reasonable 1.7% this week. No doubt the transports was lagging because Oil prices have now put in a key multi-month floor of $53. As oil prices continue higher in Q1 of 2015, the Transports is going to continue lagging the broader market. Despite that major problem, Trans looks set to break the giant 10k threshold by March/April.

A very powerful week for US equities. Despite some distinct pre-FOMC weakness into the Tuesday close, the market has put in a key floor on all indexes.

There looks to be continued upside into year end, and probably most of January.

For the equity bulls, most notable is the R2K, which has traded sideways across the year. This is very much in the manner of the Transports in 2012. Once the tranny broke up in Jan'2013.. it never looked back, and I would imagine the R2K doing much the same.

Next week will naturally be a very quiet holiday week, although there a few data points of note...

Audio podcast from yours truly...


--
Back on Monday.
Posted by Trading Sunset at 17:00:00
Email ThisBlogThis!Share to TwitterShare to FacebookShare to Pinterest 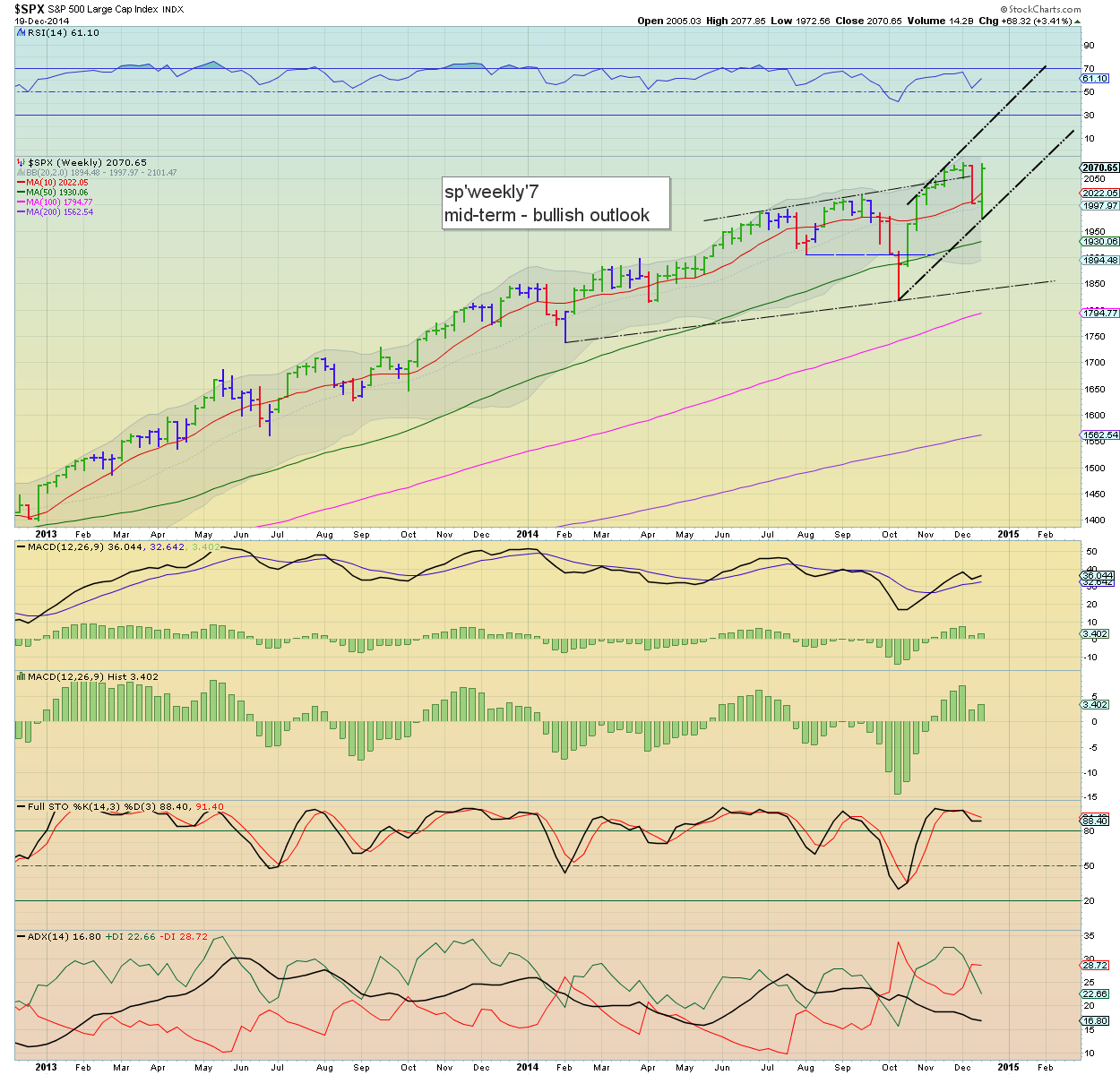 A powerful outright bullish green candle for the sp'500... and there is no doubt we have a solid floor of sp'1972.

However, considering Oil.. which is due for a massive $17/22 rally into the $70s... it could certainly help inspire the market to accelerate the trend.
--

The Shanghai Comp' is now higher for the eighth consecutive month, by an extremely powerful 15.9% this month... 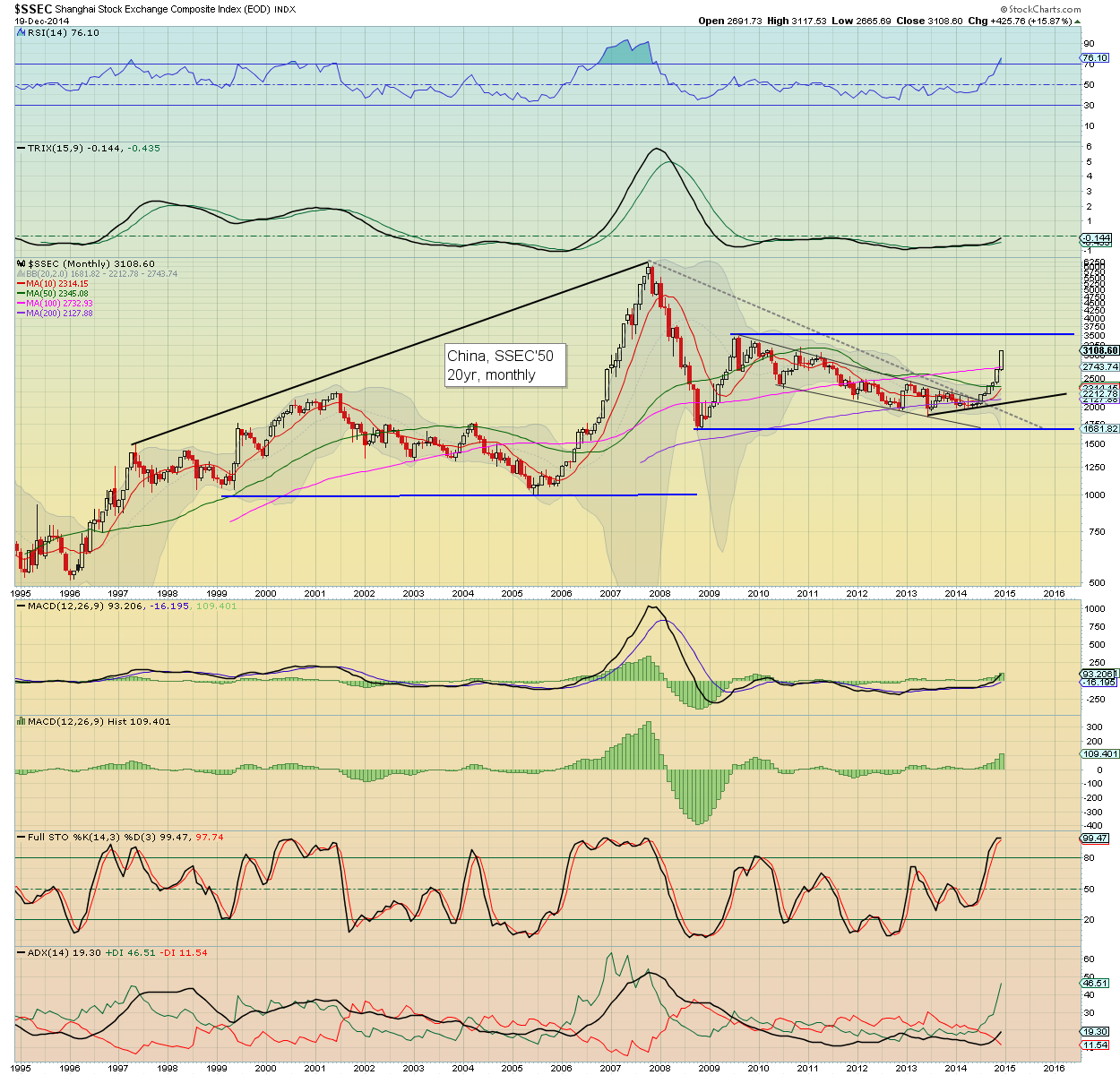 US equity indexes continued to push higher for a third day, with sp +9pts @ 2070 (intra high 2077). The two leaders - Trans/R2K, settled higher by 0.4% and 0.3% respectively. Near term outlook is for continued broad gains into end year.. and beyond. 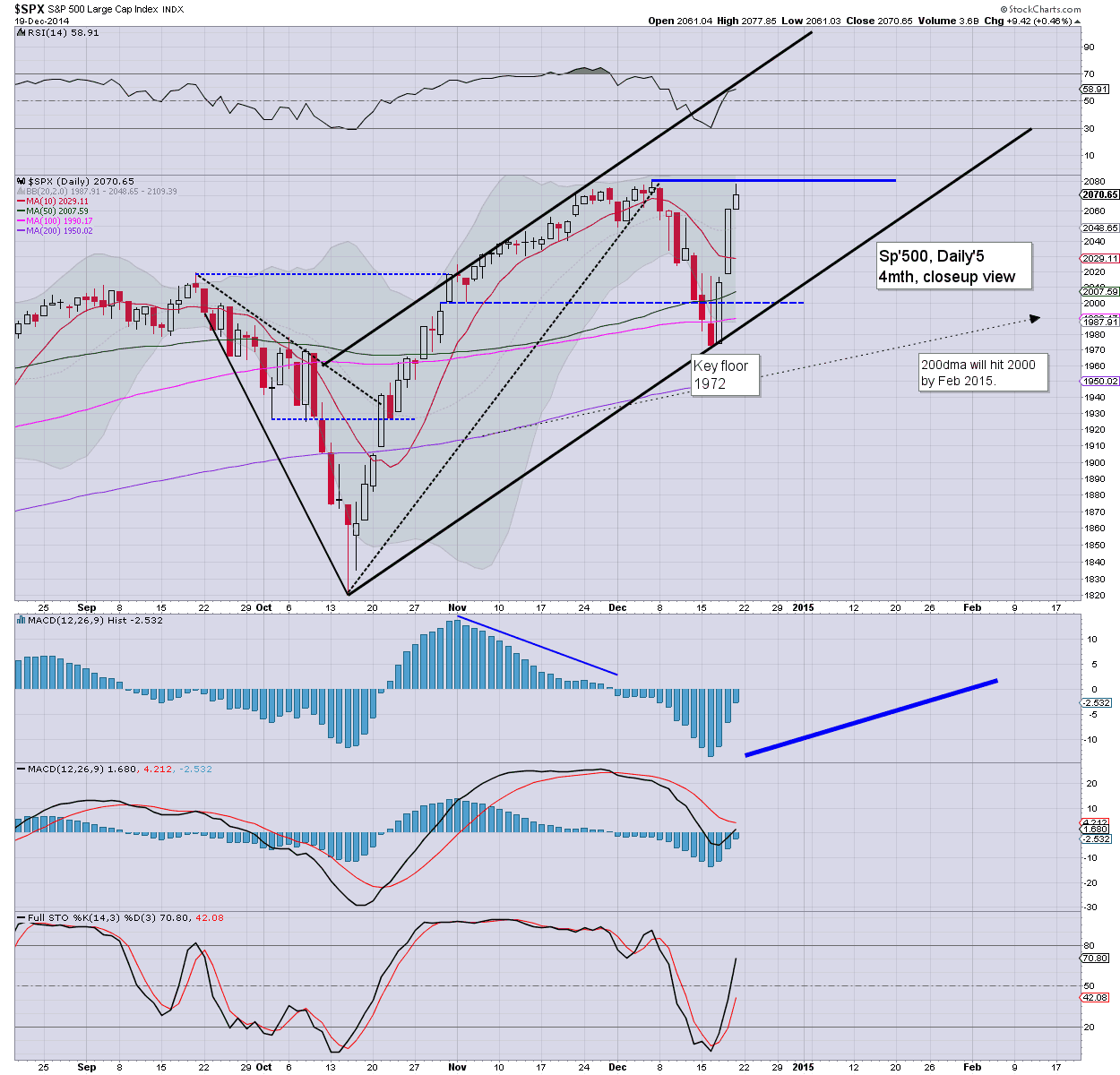 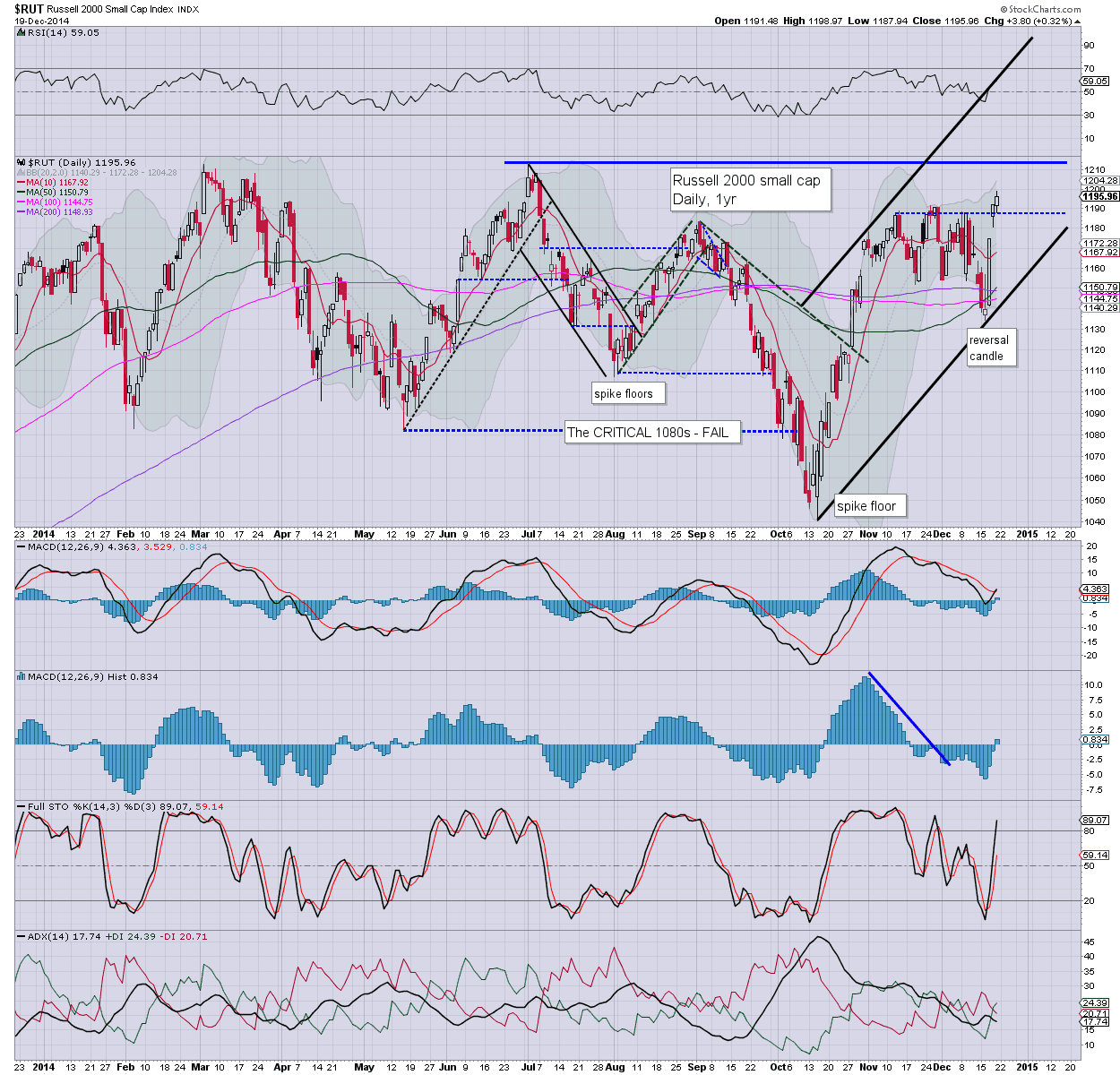 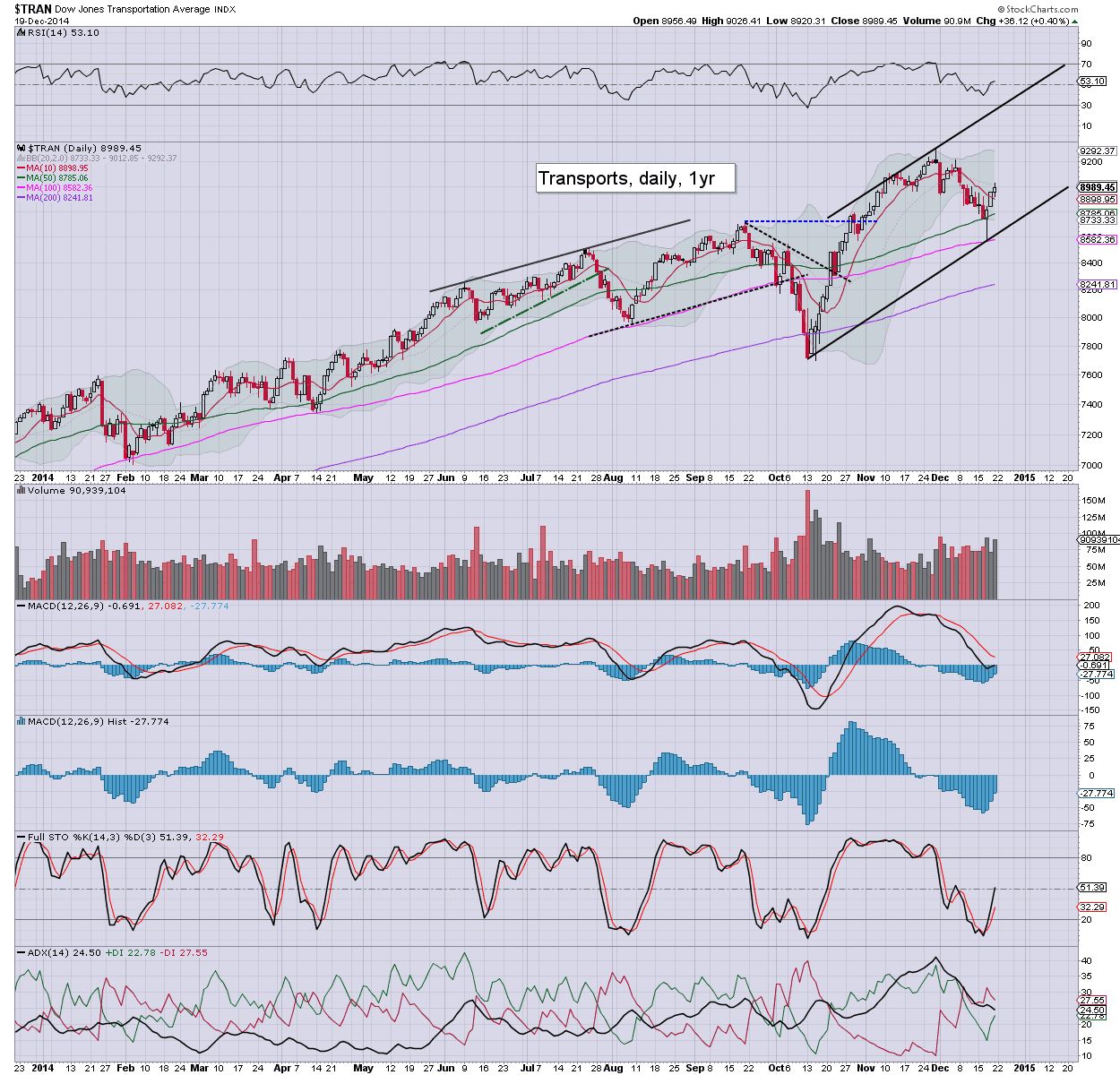 *a very notable weekly close for the R2K in the 1190s. New historic highs are coming, possibly even before year end.
--

So.. the third consecutive daily gain, with the sp' ramping from a Tuesday close of 1972, to a Friday high of 2077... just 2pts shy of breaking a new historic high.

The broader trend has indeed resumed.. and we're headed into the sp'2100s.. and beyond.
--