With further equity weakness concluding the month, the VIX naturally climbed a little further, settling +1.2% @ 17.01 - having earlier spiked to 17.81. Across the week, the VIX gained a very significant 21.7%. Near term target remains VIX briefly in the low 20s. 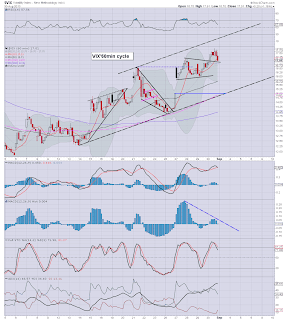 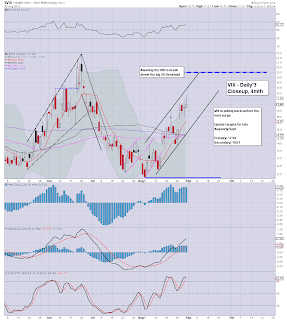 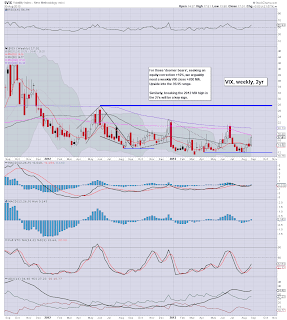 For the equity bears out there, the VIX is highly suggestive of more market downside to come.

Just a look back at some of the recent multi-week VIX up cycles, offers the 200 MA as a very valid target..and right now that is VIX 20.13

Underlying MACD (blue bar histogram) on the big weekly chart is now positive cycle, and it would be very surprising if we don't at least briefly break into the VIX 20s in the current cycle.


*hourly VIX cycle is suggestive of a lower VIX early Tuesday, but on any fair outlook, I can't imagine the VIX <15 for some weeks.

The market closed weak, with the headline Dow/SP/Nasdaq all moderately lower. The two market leaders - Trans/R2K, both much bigger declines of 1.2% and 1.6% respectively. Near term outlook remains weak, with a primary target of sp'1570/60s. 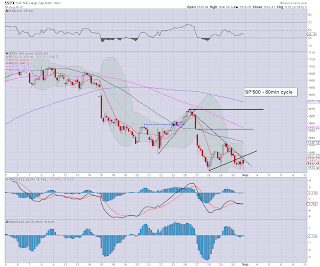 Well, a bit of a mixed and choppy day..although most notable..the VERY strong discrepancy between the headline indexes, and two market leaders.

I have to think there remains broad downside next week, that view is strongly supported by the bigger weekly charts..even the monthly charts are now offering an initial rollover.
--

*I closed out a VIX-long position near the close, am back to fully on the sidelines.

I will seek an index short/VIX-long..next Tuesday.

*the usual bits and pieces across the weekend....


Next main post..late Saturday...probably on the US monthly indexes
Posted by Trading Sunset at 21:01:00
Email ThisBlogThis!Share to TwitterShare to FacebookShare to Pinterest

The market is seeing continued minor chop, and seems stuck around sp'1634/35. The daily/weekly charts continue to warn of much lower levels into September. The closing hour still offers an opportunity for late day/end month weakness to appear. 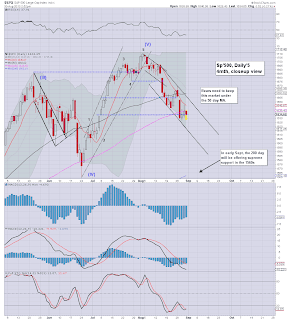 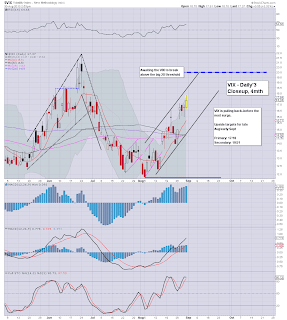 *VIX is certainly not showing any panic or real concern yet, but underlying volatility is indeed pushing higher..in prep' for September.

Starting with a big $5bn next Tuesday morning.  Regardless of how we open Tuesday...that QE should at least 'concern' all those holding short across the weekend.
- 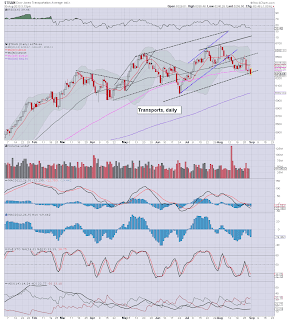 We have a marginal break on the Tranny...target is 6000


*as things are..I will hold short, via LONG VIX, across the weekend.

Regardless of the Tuesday open, I'm glad to be out..will start afresh..next month!

back at the close
Posted by Trading Sunset at 19:54:00
Email ThisBlogThis!Share to TwitterShare to FacebookShare to Pinterest

2pm update - battling it out

The market jumped from 1628 to 1636 on the comments of Kerry. The bull maniacs are now arrogantly touting a ramp into mid/late September. This seems unbelievably naive, and with still two hours left of the trading month, there is significant opportunity for weakness into the close. 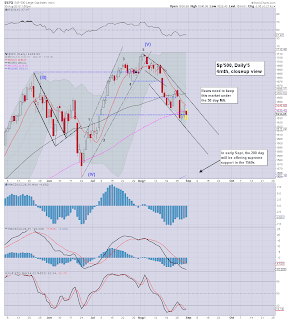 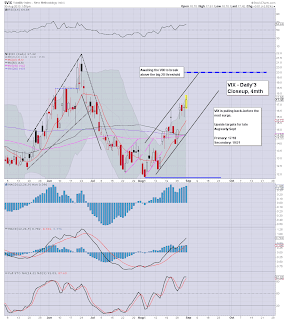 I remain trying to ignore the smaller cycles, and will focus on the bigger trends.

I have to note, I find it utterly bizarre than ANYONE, no matter how hyper-bullish they might be about the mid/long term, would consider going long this afternoon.
-

I remain short the main market, - via LONG VIX, and would consider an exit in late afternoon, if sp'1622/20..or lower.

Who wants to go long into the long (war?) weekend ?
Posted by Trading Sunset at 18:52:00
Email ThisBlogThis!Share to TwitterShare to FacebookShare to Pinterest

The market remains moderately weak. An interesting aspect the bears should look for this afternoon is any news report/statement from the US, that could easily upset the algo-bots, and knock the market 1% lower, into the 1620/15 zone, with VIX 19s. 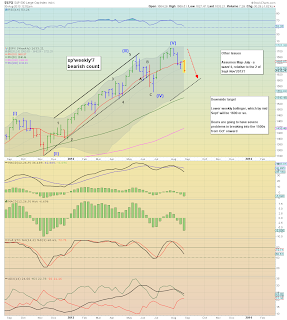 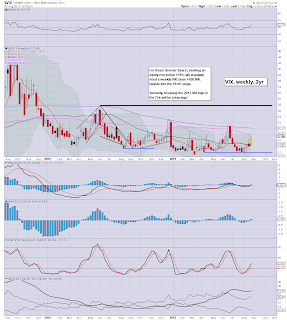 Ignoring the intra-day noise for this hour...everything looks fine for next week.

Target remains sp'1570/60s..although the lower weekly bol' will jump to 1570 at the Tuesday open..so..we might fall a little short of the June lows...but thats okay.


*I remain short the market, via long VIX, but will consider an exit into the close, if 18.25..or higher.

I find it bizarre that is somehow bullish, and I'm seeing more lunatic talk across the usual sites about a rally into mid/late September.
--

Makes no sense, when you consider the daily AND weekly trends.
Posted by Trading Sunset at 17:53:00
Email ThisBlogThis!Share to TwitterShare to FacebookShare to Pinterest

12pm update - falling into the weekend

The main indexes are weak, and with no one wanting to go long ahead of the weekend, the market looks set to fall into the close. The only issue is whether the 1620s are broken before the close. VIX is battling higher...the 18s look very viable this afternoon. 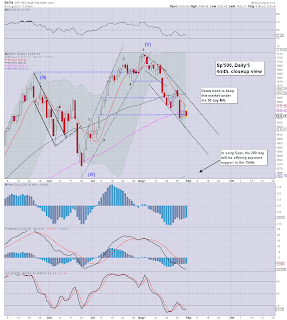 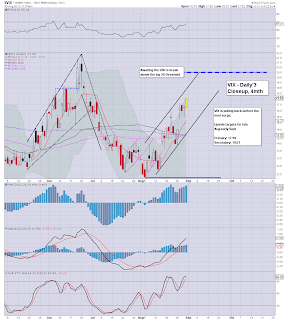 Things are looking on schedule for the bears.

11am update - market on the slide

The market is weak, and there is little reason why anyone would want to be going long ahead of the holiday (war?) weekend. Bears need to take out the recent sp'1627 low...that should open up 1620/15 by the Friday close. 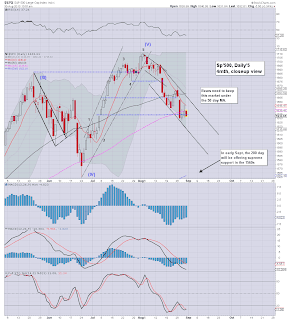 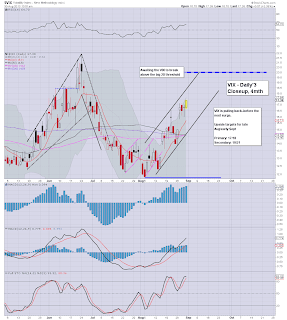 Certainly, bulls are absent..and it really could just be a case of general weakness into the weekend.

*If that is the case..I'll close out my current VIX long position.
-
Posted by Trading Sunset at 15:52:00
Email ThisBlogThis!Share to TwitterShare to FacebookShare to Pinterest 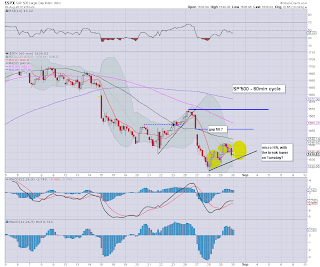 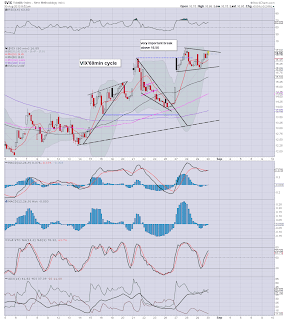 Certainly, not a particularly exciting morning, and with the econ-data out of the way, any normal person should probably just turn off their screen for the long holiday weekend.

The only thing that is likely to motivate the market to break under the recent low of sp'1627 would be a news report/policy statement. Chances of that....'small'.

-
A very fair question remains though...who wants to be long across the long weekend into early September?

--
Keeping in mind the bigger picture...those seeking significant weakness this autumn should look for a bit of a rough week next week. 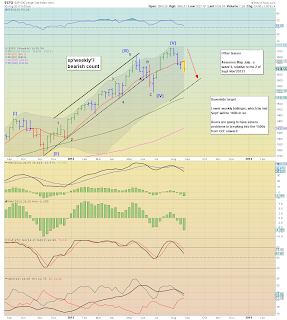 At least we look set to close with a red candle this week, the first since mid June, and that is why I remain broadly bearish in the immediate term.
Posted by Trading Sunset at 14:53:00
Email ThisBlogThis!Share to TwitterShare to FacebookShare to Pinterest

Good morning. Futures are slightly higher, sp +3pts, we're set to open around 1641. Precious metals are weak, Gold -$10, whilst Oil is flat. Bears need to push lower into the 1620s by the Friday close, whilst bulls should merely seek a third day higher. 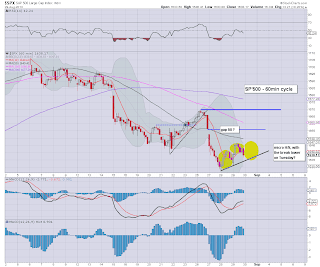 So. no major drop at the open, and instead, bulls actually have a chance at making a higher high  this morning  >1646.

Considering the hourly index/VIX charts..I'd be surprised if we don't close at least moderately lower.

PMI number will known to some in 5mins..market will react...!

A break into the 1620s would be..useful this morning.
Posted by Trading Sunset at 13:29:00
Email ThisBlogThis!Share to TwitterShare to FacebookShare to Pinterest

Mild panic into the weekend?

The main indexes closed moderately higher for a second consecutive day, but there remains some very significant underlying weakness. Primary downside target remains the sp'1570/60 zone, where the 200 day MA is now lurking. 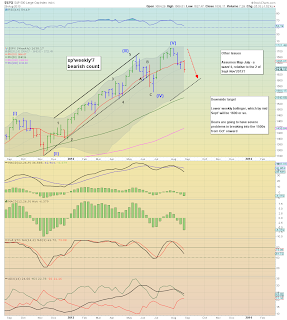 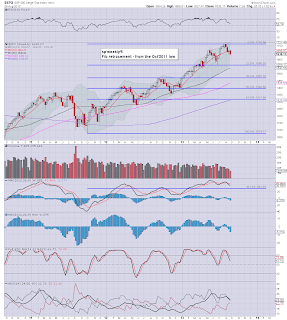 So..a second day for the bulls, but the gain of just 3pts on the sp'500 to 1638 does little to negate the bigger weekly down trend.

I'm still holding to the bigger target of the lower weekly bollinger, currently 1564 - and that will be in the low 1570s next week.
--


Volatility trending back to the 20s. 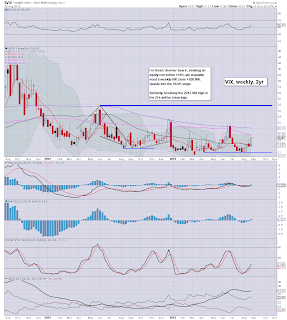 Since the market peak of sp'1709, the VIX has been battling higher from the 12s, and is now primed to make an attempt to test the big 200 weekly MA..coincidentally at the key VIX 20 threshold. I don't expect a VIX much higher than 21/22 in the current cycle, even if sp'1570/60s are hit next week.

There is trio of econ-data in the morning to wrap up the month. Personal income/outlays, Chicago PMI, and consumer sentiment.

*there is ZERO QE-pomo, although a new POMO schedule for Sept' is announced at 2pm.
--

So how might Friday play out? Certainly, the hourly index/VIX charts are primed for the bears, and the daily/weekly charts are similarly still in favour of the bears. It is always hard to fathom how the market might to econ-data, but regardless of that, I'm guessing we see some weakness into the Friday close.

*I remain short the main market, via LONG VIX, seeking an exit ahead of the long 3 day weekend. I'd settle for anything in the 19s.
- 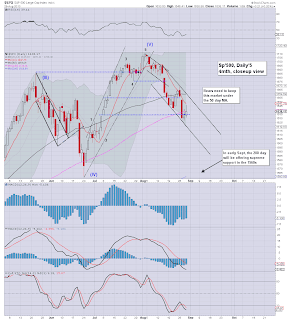 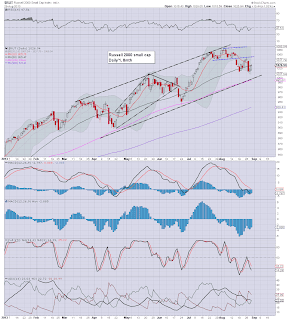 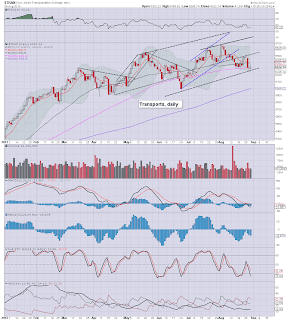 All things considered, despite a second consecutive daily close to the upside, the bears should be content with today.

The market has arguably worked off the oversold condition - seen better on the hourly cycle charts, and is now primed for another significant down wave.

Daily charts are offering sp'1615 by the Friday close. Anything <1600 looks unlikely until the latter half of next week.

*I remain short the main market, via LONG VIX.
--