With equities closing significantly higher, the VIX was naturally in cooling mode, settling -9.6% @ 18.16. Near term outlook offers broad equity upside into the next FOMC, and will likely equate to VIX going sub-teens again by mid December. 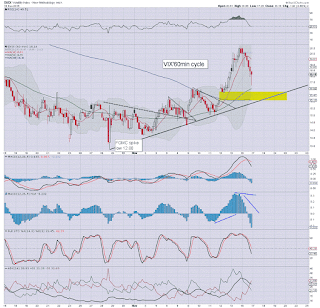 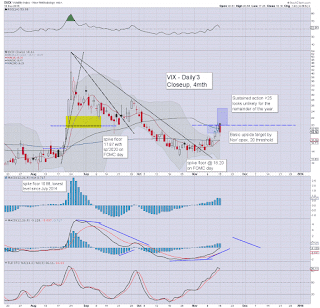 Suffice to add... so long as equities don't resume falling, with sustained action <sp'2K, there is little reason to expect the VIX will be able to break back above the key 20 threshold in the near term.
--

more later.... on the indexes
Posted by Trading Sunset at 23:00:00
Email ThisBlogThis!Share to TwitterShare to FacebookShare to Pinterest

US equities closed significantly higher, sp +30pts @ 2053. The two leaders - Trans/R2K, settled higher by 0.5% and 0.8% respectively. Near term outlook is for broad upside into the next FOMC of Dec'16th. From there... it really is up to the Fed. If no rate rise... uncertainty and lack of confidence will return to world capital markets. 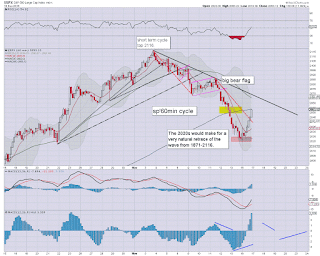 *closing hour action: new highs in the closing hour... absolutely nothing for the bears to cling to.
-

**closing bell at the NYSE rung by Direxion... arguably.. the bane for most equity bears since 2009. Their tag line should be 'statistical decay is a bitch'
--


So.. the week starts positive... despite the overnight declines.

We've a clear floor sp'2019.. with VIX having maxed out around the key 20 threshold.

In many ways.. for those bears wanting to re-short.. its arguably a case of 'turn ya screen off for four weeks'.

I am holding to a no-shorts policy... will consider picking up a few long positions (if the mood takes me) on any minor retrace, whether tomorrow.. or more likely... Wed'.
-


--
more later... on the VIX
Posted by Trading Sunset at 21:02:00
Email ThisBlogThis!Share to TwitterShare to FacebookShare to Pinterest

US equities have continued to battle upward, and look set for the first sig' net daily gains since Nov'2nd. Oil is unquestionably helping broader market sentiment, having swung from -1.6% to +1.9%... holding the key $40 threshold.. at least for today. 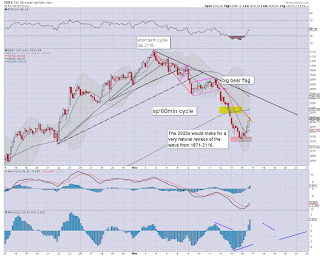 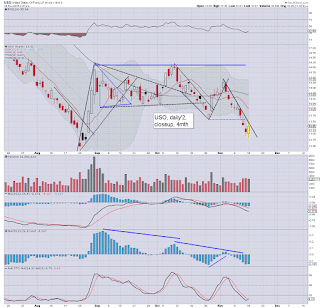 Price target has been met.

Enough time has elapsed in this down wave.

Even if there is some weakness across Tue/Wed'... today's low of sp'2019 looks set to hold... with broad upside into the next FOMC.
--

The entirety of season'1 will be released at 12am midnight.. this Friday.  For some.. it will make for one hell of a 13 hour movie.

--
back at the close
Posted by Trading Sunset at 19:55:00
Email ThisBlogThis!Share to TwitterShare to FacebookShare to Pinterest 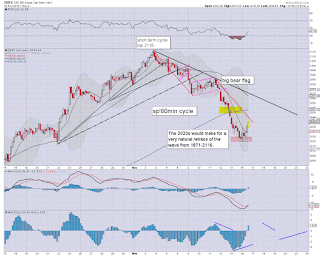 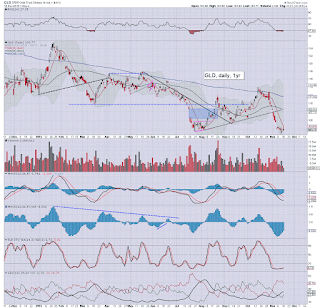 *a clear black-fail spiky candle on the Gold daily chart. Broadly, much lower levels look due into next year. The low of $1072 makes little sense as a key multi-year low.... $1000 looks due. As ever... if correct, it will drag the related mining stocks lower.
--

Personally, I don't much like it... but then.. I'm just not in the mood to hit buttons today... other than the publish key. I guess you could argue I'm overly twitchy on Oil affecting the broader market.
--

Whilst the main equity indexes push moderately upward to sp'2035, there remains notable weakness in retail stocks. Macy's (M), -2.4%, Urban Outfitters (URBN) -9.4%, and JCP -0.7%. The broader trends since the summer peaks remain absolutely dire, even worse than the energy sector. 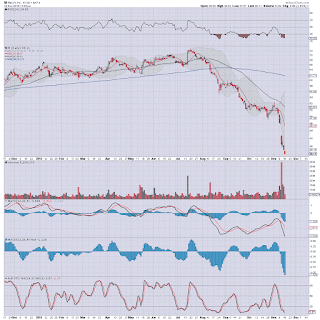 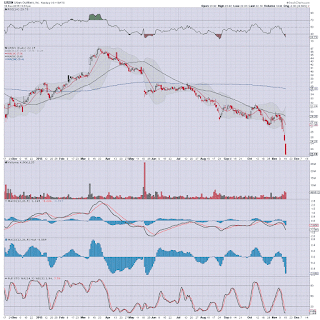 Just last Thursday lunch time on clown finance TV channel'1 (aka.. CNBC) the chatter was focused on the retail stocks. Despite Macy's posting lousy numbers... a few of the cheerleaders were (not surprisingly) still bullish...

Crawling out of the hole this Monday.. Jim Lebenthal...

Mr L. was touting JCP when it was battling in the high $8s. Today, its lower by almost 20% in the following 3 trading days.

We all make bad calls, but seriously, I'm absolutely bemused why anyone would be bullish the old retail stocks (and lets not forget Sears (SHLD).. which is similarly destroyed.
--

... and yes.. retail sales as a whole remain broadly weak.. despite gasoline/energy prices remaining close to multi-year lows. How would sales react if Oil ever gets back near $100 ?

--
stay tuned
Posted by Trading Sunset at 18:00:00
Email ThisBlogThis!Share to TwitterShare to FacebookShare to Pinterest

Whilst US equities remain in moderate chop mode, there remains notable weakness in WTIC Oil, -1.3% in the low 40s (intra low $40.06), battling to hold the key $40 threshold. With inventories likely to remain in surplus mode into 2016, there is little reason to be bullish about the black-gold. 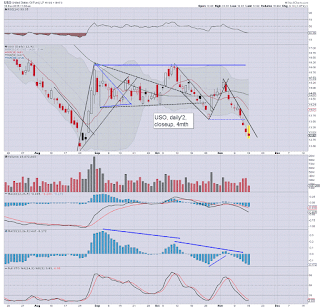 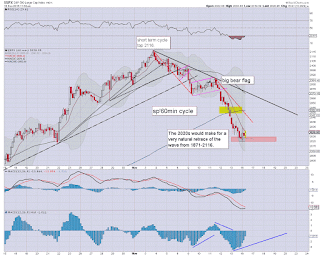 *it is notable that Oil is lower for 8 of 9 trading days. The bigger weekly/monthly cycles both support the notion of sustained action <$40 into year end.. .and beyond.
--

A relatively subdued start to the week... as the equity market battles it out to solidify a floor.

My concern (in terms of going long).. does indeed remain Oil. Even a brief foray into the high 30s would be an excuse for sp'2000/1990s.. before a much more decisive and stronger reversal than we saw today.


--
time for tea :)
Posted by Trading Sunset at 16:56:00
Email ThisBlogThis!Share to TwitterShare to FacebookShare to Pinterest

US equities are seeing a little chop, but still moderately positive, after overnight lows to around the sp'2K threshold. USD continues to build gains, +0.5% in the DXY 99.30s. Metals remain choppy, Gold +$3. Oil remains notably weak, -1.3% in the low $40s. 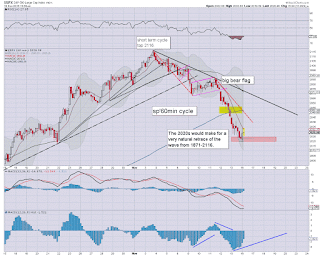 The strong swing in Oil (from gains of >2%), to -1.6% is really restraining this mornings equity attempt to rally.

Again, the underlying issue of supply has not in any way been resolved. Sustained price action under the $40 threshold looks probable... and that sure won't help the energy stocks.. nor broader market.
-- 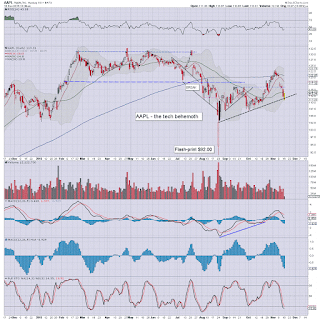 Finding support around rising trend.. although yes.. its far from perfect. Those equity bulls seeking hyper-upside are clearly going to need to see AAPL >$132... preferably by year end... but that sure won't be easy. 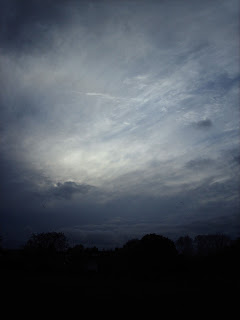 time for an early lunch
Posted by Trading Sunset at 15:52:00
Email ThisBlogThis!Share to TwitterShare to FacebookShare to Pinterest 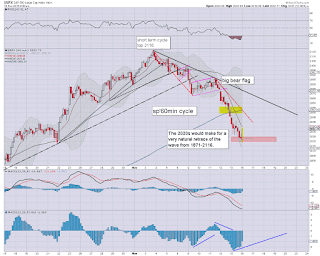 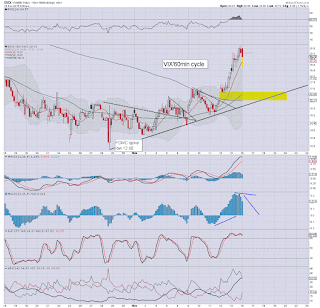 An opening reversal... and its looking like we have a key floor of sp'2019.

The wild card remains Oil. Any loss of the $40 threshold would upset the broader market. The next pair of inventory reports (Tue AH, and Wed am) will be pretty important, but then, aren't they always?

--
back soon
Posted by Trading Sunset at 14:51:00
Email ThisBlogThis!Share to TwitterShare to FacebookShare to Pinterest 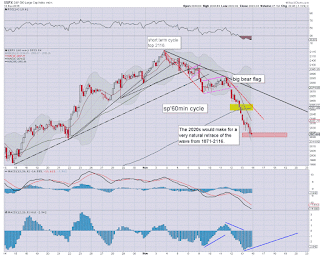 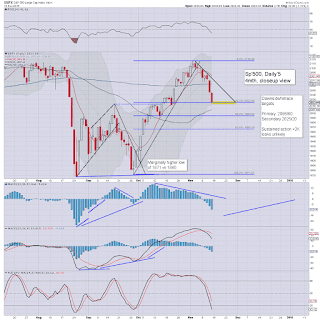 The overnight swing certainly makes for a rather powerful low . The only issue now is whether the cash/real market will want to test that low.... in the sp'2005/00 zone.

The smaller 15/60min cycles are already on the very low side, so the threat remains against the bears.

French market - CAC, opened lower by around -1.0%, back to almost flat, around 4800. A year end close back above the 5K threshold is rather important.
--

Monday moderate washout, and then up?      Probably.