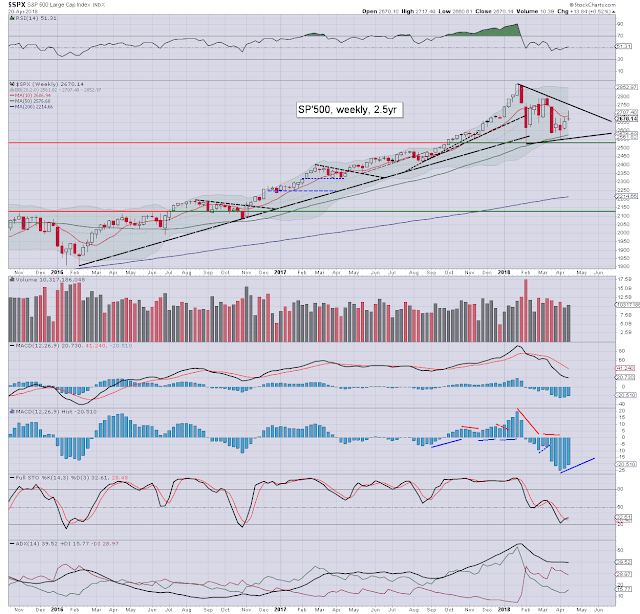 Despite ending the week on a moderately weak note, the sp' still saw a net weekly gain of 13pts (0.5%) to 2670. The weekly candle is somewhat spiky, but we do have a higher high and higher low, which leans to upside into end month/early May. Soft target is the 2740/50 zone. 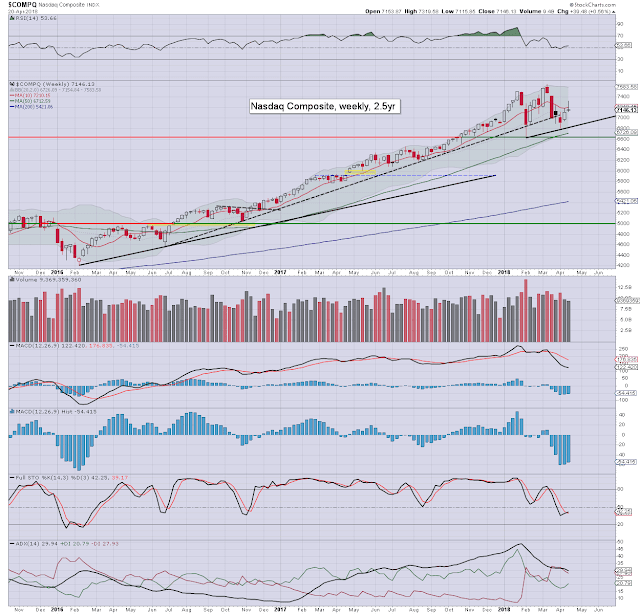 The Nasdaq was pressured into the weekend by negative AAPL chatter, but still managed a net weekly gain of 0.6% to 7146. Big support around 7k, with major upside resistance in the 7400s. 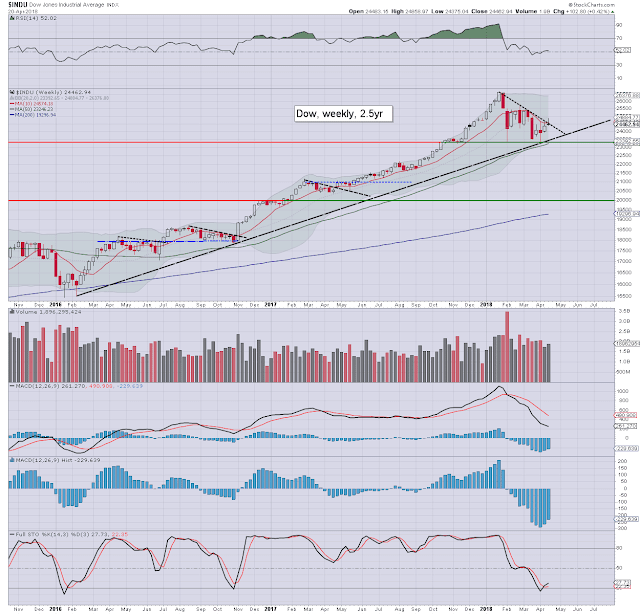 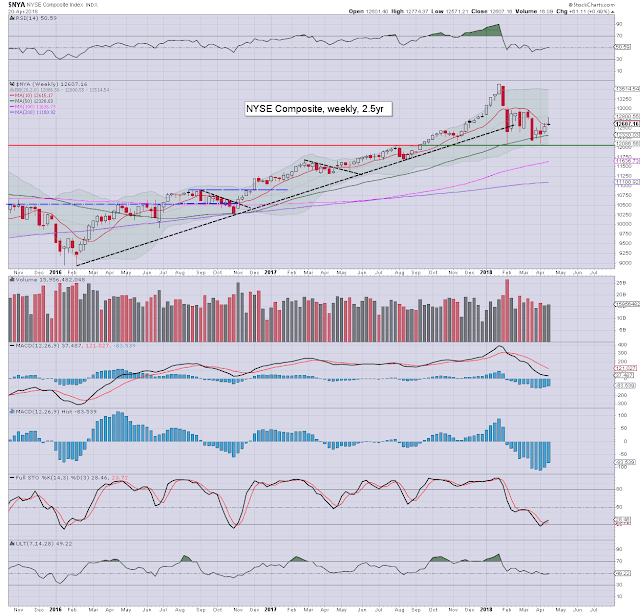 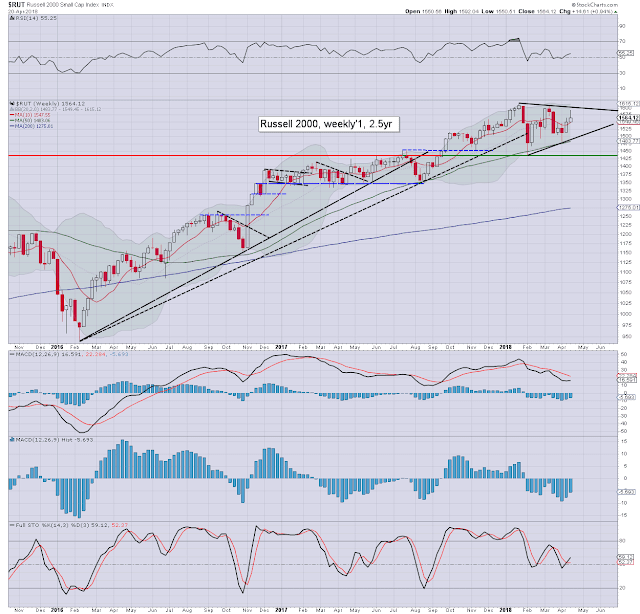 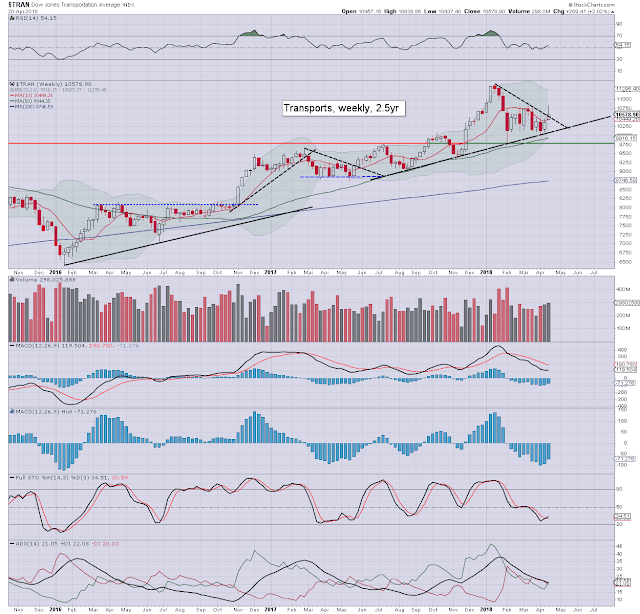 The old leader saw a very significant net weekly gain of 209pts (2.0%) to 10578. There was a notable fractional break of descending trend/resistance from mid January'. Considering rising WTIC/fuel prices, the weekly gain was especially impressive.
–

All six of the US indexes saw a second consecutive week of gains.

The Transports lead the way higher this week, whilst the Dow was the laggard.

Friday saw the US 10 year bond yield hit 2.96%, the highest level since Jan'2014. That was clearly one reason the equity week ended on a somewhat bearish note. After all, the mainstream are still spooked at the notion of the 10yr approaching the psychological threshold of 3.00%. Indeed, psy' thresholds do matter! 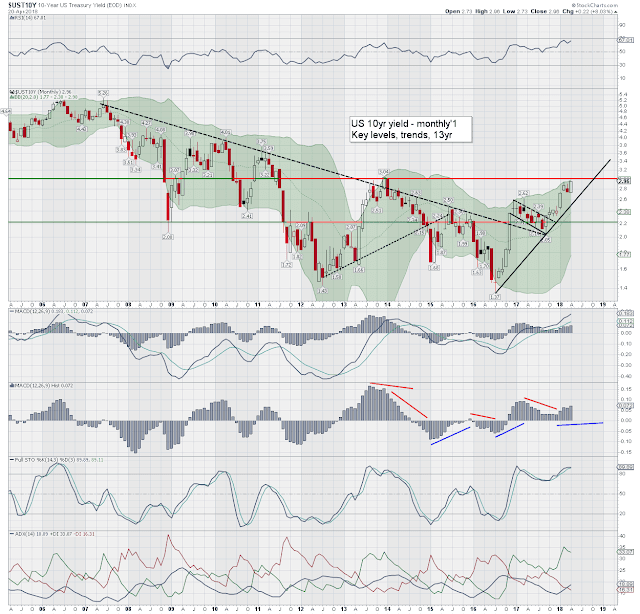 I want to be crystal clear on the following...

-A higher bond yield is neither a 'good' or 'bad' thing. Bond prices (and their yields), like equities, are largely determined by supply/demand factors. Inherently, a rise in bond yields does make equities less attractive. However, as the chart above shows, you can have times when yields and equities rise together.

-The yield curve means little, even if inverted. Much is made of the yield curve in the mainstream, but it doesn't necessarily equate to anything in the 'real world'. Just because the 10yr yield is only marginally less than the 30yr yield doesn't directly mean a recession is due.

-Keep in mind there is still a great deal of ongoing global QE, and some of that money flows into the US, and that will affect bond prices/yields. Further, the central banks themselves will periodically meddle in the bond market (whether directly, or via their 'institutional friends'), to skew prices/yields.

-The US Fed's QT program (set to max out at $50bn a month from October onward) is increasing the supply of bonds, and thus is inherently an upward pressure on bond yields.

-rising bond yields, the 'normalisation', is arguably a very good thing. Do we really want interest rates (and related bond yields) at near zero in perpetuity? I would hope few, if not none of you, want that.
--

The Trump administration has decided to further raise govt' expenditure and cut taxes, and thus increasing the deficit. More govt' T-bonds will be issued. An increased supply of bonds saturates the market... reducing bond prices, and that inherently pushes up bond yields.

The US president is (likely unknowingly) digging a rather big hole for himself, and the broader US populace. The bigger the deficit, the more bonds will be issued, and the higher bond yields will go. That in turn will pressure equities, at least to some degree. The net effect on equities doesn't necessarily mean net annual declines.
-

I'll merely conclude by saying that it seems a given the 10yr yield will break >3.00%. Will it be next week, in May, or even some considerable time beyond? I don't know, as I don't have a Delorean. I can say though, when it happens, equities will be very significantly whacked lower, if only for a short while.
-

Its a generally overlooked issue, but it is the case that once the fed cut rates, that is when alarm bells do merit being sounded. For the moment, the econ-data is coming in broadly fine, with corp' earnings beyond superb. A rate hike in June should help to bolster confidence, and of course, the financials especially benefit from such hikes. Until then.... yours truly has few concerns.
-- 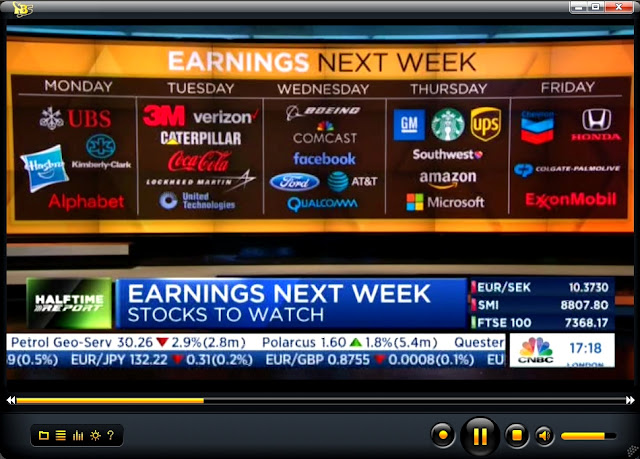 *there are no fed officials scheduled, as the blackout period will be in effect, ahead of the next fomc meeting of May 1-2.
--