Lets take our regular look at the SPX 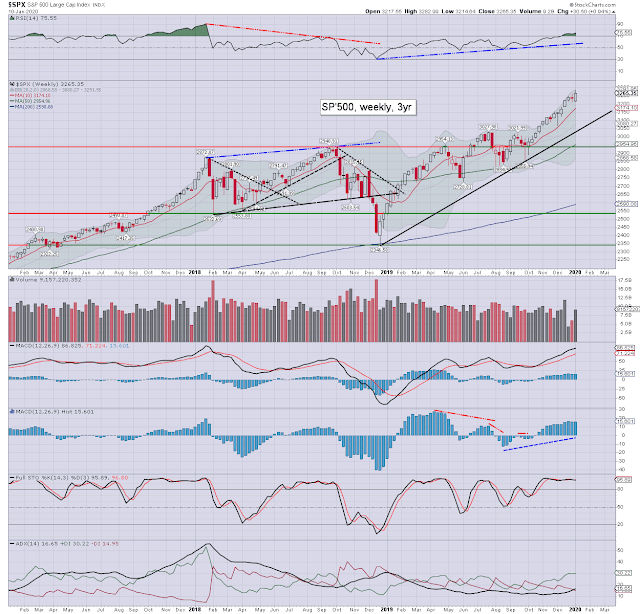 On any basis, it was a week for the equity bulls, with the SPX breaking a new historic high of 3282. Whilst Friday settled a little lower, that still made for a net weekly gain of 30pts (0.9%). Weekly price momentum remains on the high side, but there is no real sign of that ending.

It will be the start of Q4 earnings season. Whilst the market isn't expecting anything great, it will be more focused on guidance. Many mainstream analysts are seeking EPS growth of  +5% to +10% this year. Any earnings statements where that isn't the case, and a given stock/sector will get whacked.

*Wednesday will likely see the US and China sign phase'1 of a trade deal. Right now, it would seem unlikely that there will be a signing of phase'2 until after the next election.

*Friday will be OPEX. Price action can be expected to be choppy, on somewhat higher volume. As the following Monday Jan'20th is CLOSED, there might be an element of more traders selling ahead of the three day break.
-

We're only seven trading days into the year, but we've already seen some drama, with new equity historic highs, along with WTIC $65s and Gold $1613s.

I would imagine that mainstream attention will increasingly focus on whom the Democrat nominee might be. Its possible the market might use the fear of a President Warren or Sanders, as a excuse to sell lower. Regardless, Trump remains set for a second term, which the market clearly prefers.

There is the fed of course, and it should be clear, they'll print to oblivion and cut rates further on any sign of economic or equity weakness. I'd not expect any policy change at the Jan'29th FOMC.

Finally, there is the US/Iran situation, which is back to 'simmer mode'. Its difficult not to see things heating up again by the early spring, and who doesn't like some geo-political drama?

Have a good weekend
--
*the next post on this page will likely appear 5pm EST on Monday.
Posted by Trading Sunset at 16:21:00
Email ThisBlogThis!Share to TwitterShare to FacebookShare to Pinterest
Newer Posts Older Posts Home
Subscribe to: Posts (Atom)