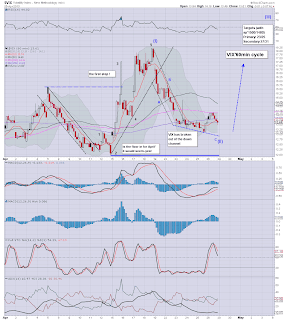 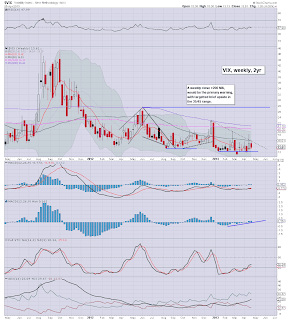 The action today is pretty similar to that of Friday April'12. The following Monday saw the VIX break into the 17s. The pattern certainly looks similar, so it will be fascinating to see if next Monday is a day for the bears.

It has to be said, the weekly VIX decline of 9% is disappointing to see though. We've again come close to breaking back into the bizarrely low 12s.

Hourly cycle offers upside ALL of next Monday, so the bears do have a window of opportunity.

a little more later..on the indexes
Posted by Trading Sunset at 23:00:00
Email ThisBlogThis!Share to TwitterShare to FacebookShare to Pinterest

The market closed broadly higher for the week, with the SP' gaining around 2% on the week. The one solace for the bears is that the April'11th high of 1597 was not taken out. It looks like we closed the week with a small index bear flag, suggestive of weakness on Monday. Its been a long...and tough week for those in bear land. I'm glad its over.

As noted, at least we didn't take out the 1597 high, the obvious key objective for the bears is to take out the recent low of 1536.

--
*bits and pieces to wrap up the day, across the evening.

Next main post, late Saturday, on the weekly US indexes
Posted by Trading Sunset at 21:01:00
Email ThisBlogThis!Share to TwitterShare to FacebookShare to Pinterest

Regardless of  how we close today, its been a rough week for those in bear land. We've seen a broad climb from sp'1555 to 1592, with VIX back in the 13s. Baring a break over 1592, bears have their first opportunity on Monday of showing whats possible in the weeks ahead. 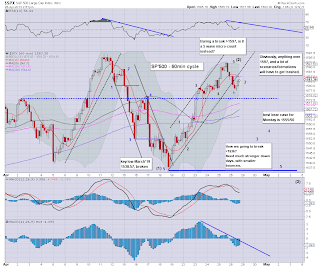 Still looks like a minor 2 wave is being formed. Maybe we'll slip in the closing hour, but anyway, it looks okay for downside across Monday.

A difficult week for many.

back at the close
Posted by Trading Sunset at 19:54:00
Email ThisBlogThis!Share to TwitterShare to FacebookShare to Pinterest

The decline from sp'1592 to this mornings 1577 might count as the first little wave lower. Perhaps we're due for a small bear flag into the Friday close, before major downside on Monday? VIX has lost the 14s, Oil and precious metals recover from earlier declines. 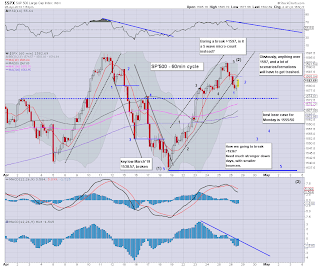 Clearly, we're not going to close particularly down much, even <1580 looks difficult now.

Regardless, I'm reasonably confident for next week, baring a move >1592.
Posted by Trading Sunset at 19:18:00
Email ThisBlogThis!Share to TwitterShare to FacebookShare to Pinterest

Market is battling to break back into the sp'1580s. VIX is holding minor gains of 3% in the low 14s. Precious metals and Oil appear somewhat broken, and both look vulnerable into the close. Bears should still aim for a close <1570, but that does look overly difficult. 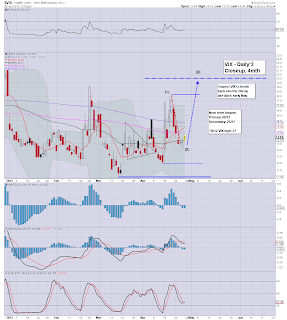 More than anything right now, the VIX daily chart is probably the most support for a near term 'bearish market' outlook. We are very close to seeing a confirmed turn.

First target are the low 17s. I suppose thats viable on Monday.
--

I remain heavy short, SPY, USO, will hold across the weekend.

A close in the 1580s would be disappointing, but it'd set up much lower levels on Monday in the 1550s. We shall see.
Posted by Trading Sunset at 17:56:00
Email ThisBlogThis!Share to TwitterShare to FacebookShare to Pinterest

12pm update - weakness into the weekend

Mr Market looks to have put in a marginally lower high of sp'1592. Daily charts are starting to offer a viable turn, with a challenge of the 1536 low later next week - along with the VIX in the 20s, for the first time since last December. Things could be getting real interesting..soon. Things are starting to look rather good.

First downside target are the low 1570s. A daily close around 1568/66 is viable today, which would really help to clarify things for next week.
--

*Oil has broken. USO breaks <33, and it is arguably confirming top as also seen on the daily charts. 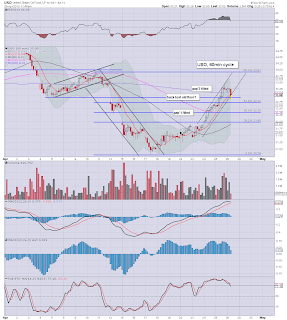 Moderate morning weakness, with a break <1580, sp' has arguably broken below the rising channel since the rally started last Thurs/Friday. Bears should seek a weekly close <1570, with VIX in the upper 14s. Precious metals holding minor gains, Oil looks maxed out. 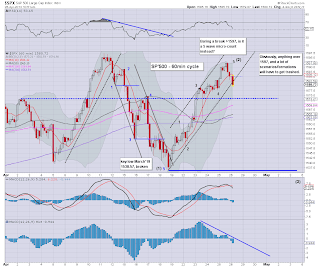 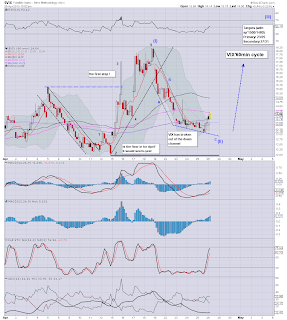 Certainly, the price action is still very minor, but underlying trend appears to be turning to the downside.

Bears need to see the sp'1560s, before they can be confident that a successful break under 1536 is viable.

UPDATE 11.38am.. Oil breaks..  USO back <33...under the hourly 10MA, and is probably starting a new multi-day cycle.
Posted by Trading Sunset at 15:54:00
Email ThisBlogThis!Share to TwitterShare to FacebookShare to Pinterest

After a 5 day rally/bounce, the market is seeing moderate weakness. Bears should be desperate for a weekly close <1570. That won't be easy, but a 1% daily decline is not exactly asking too much either. VIX is higher, but only a few percent. 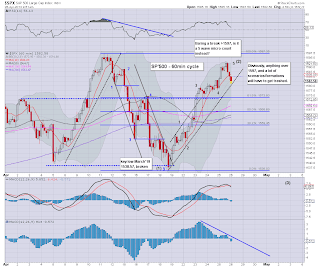 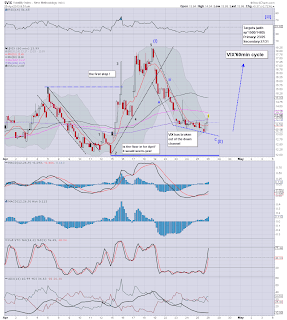 So, the GDP data comes in a little lower than the market expected, but hey, it has to be said..2.5% sure isn't a negative number.
--

The hourly chart suggest there is channel support @ 1580, so it'd be useful if we can break that this morning.

Baring a break...and close above the recent 1597 high, I still think there is a high probability that the market is merely putting in a marginally lower high.  It'll take some days to know if that's the case, and by then, we would be challenging the 1536 low.
-- 10.12am.. Despite it being very minor so far, the weakness IS out there, but it looks like bears first real chance of significant downside will now be Monday.

Problem with that, is the weekly charts will close today somewhat bullish. Hmm
Posted by Trading Sunset at 14:53:00
Email ThisBlogThis!Share to TwitterShare to FacebookShare to Pinterest

Good morning. (as at 8.15am) Futures are a touch lower, sp -3pts, we're currently set to open at 1581. GDP data is due shortly, and that will likely have a considerable effect on Mr Market for today, and perhaps the next few weeks. 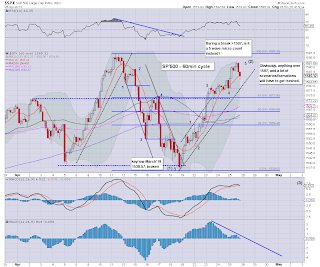 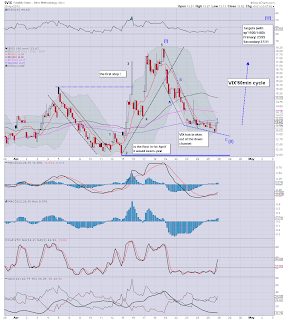 Hourly index/VIX charts remain highly suggestive that underlying price momentum is swinging back to the bears, although until we're trading back <sp'1570, bears really can't be confident that a new 5-7 day down cycle is underway.

Best bear case today, seems to be a close in the low 1560s, with VIX in the 17s. I realise that is a bold scenario, and it would make for a very clean reversal from the recent multi-day ramp.

I can't fathom how it came in that high, regardless, bulls should consider it more than acceptable. Futures are a touch lower on the data. 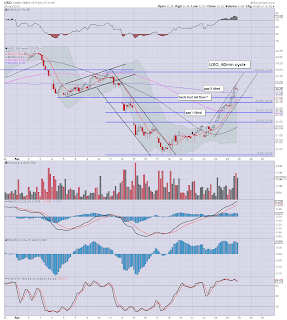 Primary target remains 28/27, although that is highly dependent on a new index cycle lower, with a hit of sp'1480 within the next few weeks.

VIX breaks into the 14s..with SP..on the threshold of breaking lower channel support @ 1580
Posted by Trading Sunset at 13:16:00
Email ThisBlogThis!Share to TwitterShare to FacebookShare to Pinterest

On the edge of a cliff, or a breakout?

With the main indexes climbing for a fifth consecutive day, we're close to breaking the recent highs from April'11. It is a classic breakout to the upside..or cliff dive to the downside situation. Friday will likely be a pivotal day, and shape the next few trading weeks. 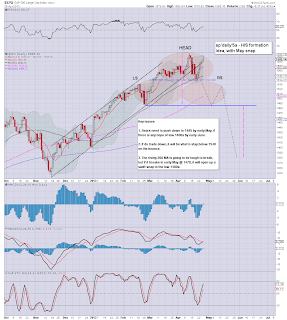 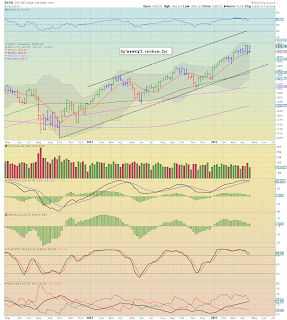 I'll start with the third chart, the 'rainbow' (elder impulse) weekly chart. With further gains, the weekly candle has now flipped to outright bullish with a green candle. If we close tomorrow with a green candle, I have to say, I will be somewhat despondent.

As for the daily5a and b charts, I will hold to a possible H/S formation, unless we break above the 1597 high. Obviously, we almost did that today, and if the market considers the GDP data tomorrow 'acceptable', then sp'1600s look a given..it has to be said.

US Q1 GDP data is released @ 8.30am. It could potentially shape the next few trading weeks. Market is expecting 3.1%. I still find that almost impossible to believe. Baring some 'accounting gimmicks', how could the US economy have been growing 3%..or even 1% in the first quarter?

Just think about how things felt across January-March. Many of the econ data-points during that time sure didn't look like 3% growth to me.

Here is something to consider. Even if Q1 data comes in marginally negative tomorrow, will that be enough to send this market into another 5-7 day down cycle? Or, would the market take the bad data, spin it, and build further gains on the notion that the Fed is again less likely to end the QE programs?

Friday will be interesting. I'll be here,..and maybe YOU will be here too!

The main indexes closed with moderate gains, with sp +0.4% @ 1585. The latter day weakness was somewhat interesting, as was the close fractionally under the hourly 10MA of 1585. Yet the bears can't be confident until we're back <1570, with VIX back in the mid teens. So...we saw the bull maniacs really rattle the bears today. The break into the 1590s - which held for a few hours, was indeed disturbing to see.

Near term underlying MACD (blue bar histogram) cycle is still ticking higher, and is now positive cycle on a few indexes, and even if the bears can break <1570 this Friday, its going to be another few days before we see the trend flip back to the downside.

Tomorrow will be important. Bulls will merely have to hold the current gains, whilst bears should be desperate to get back down into the 1560/50s. As it is, a weekly close in the 1550s seems a tall order, even if the GDP data comes in bad.