US equity indexes closed broadly mixed, with the sp -1pt @ 1852 (intra range 1834/68). The two leaders - Trans/R2K, settled +1.0% and -0.6% respectively. Near term outlook is for renewed upside, as Yellen will very likely attempt to inspire/placate the market. 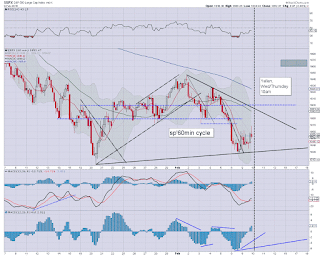 *closing hour action: I've no idea what the closing spike was about... I wasn't watching.
--

Suffice to add, it was a day where the market was more than content to broadly remain within a holding pattern ahead of the Yellen.

Yellen will have two successive daily opportunities to 'inspire' the market, not just in the US, but across the world.

Of course, she could also screw it up and say something stupid, but I'm sure her script writers will be more than aware of what the market wants to hear.

.. and in any case.. cyclically, we're still due another wave higher, before first decent opportunity for the next multi-week down wave... one which in theory will be some form of crash wave, whether to the 1700/1600s, or somewhat lower.

.. but clearly... we ARE headed broadly lower. Even the cheerleaders on clown finance TV seem to recognise that.

I noted at 1pm the situation in Gold..and the related miners.... 3 hours later.. we have a rather clear reversal. 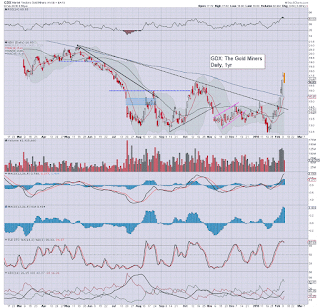 A number of the gold/silver miners have way too much debt... and a story for the spring/summer will be capitulation in the mining sector.

Not all will survive. Go read the balance sheets, it ain't so difficult to work out which names are set to disappear.

--
*a daily wrap will probably appear at 8pm EST.
-
Posted by Trading Sunset at 21:00:00
Email ThisBlogThis!Share to TwitterShare to FacebookShare to Pinterest

US equities are moderately weak, but comfortably above the Monday low of sp'1828. Market is merely in a holding pattern ahead of the Yellen, who will very likely attempt to soothe the market with indirect talk that there won't be any more rate hikes for 'some time'. 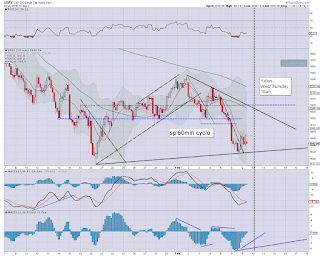 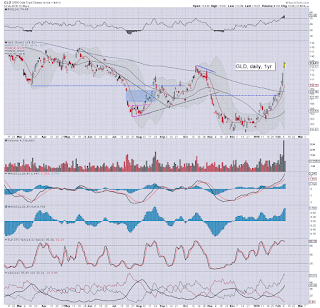 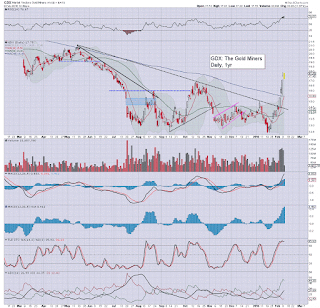 *the precious metals are looking crazy overbought.. at RSI levels not seen since Oct'2012.

A cool down looks due, and that won't likely help the related gold/silver mining stocks. For GDX, a retrace to the 200dma looks viable, and that is $2 lower.. aka, 13% or so.
--

As for equities, the early morning low of 1834 looks secure, and makes for the first higher low from 1812.

The opening black-fail candle in the VIX is another likely tell that equities have to first bounce... before they can go down again.

back at the close.  maybe
Posted by Trading Sunset at 17:52:00
Email ThisBlogThis!Share to TwitterShare to FacebookShare to Pinterest

US equity indexes remain choppy, with underlying pressure leaning a little to the upside. Clearly, the market is awaiting a press release of the Yellen testimony (tomorrow @ 10am).. and then to see how the CEO of print central copes with answering any questions about whether bio-tech stocks are now a good buy. 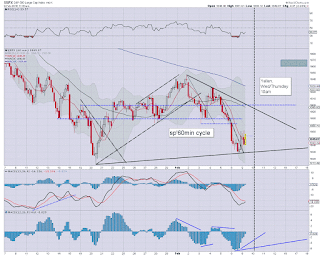 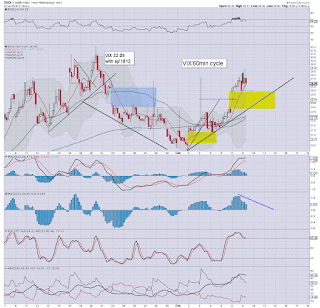 *note the opening black-fail candle in the VIX.. which so far is marking a short term top.
--

Here in the London city.... 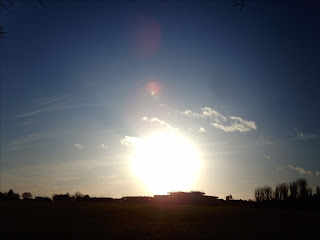 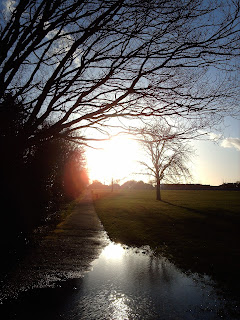 A rather good afternoon for February, and there will be no concerns of water shortages this summer. Is that bullish for utilities?

11am update - set for a holding pattern

Having seen an opening reversal from sp'1834 to 1861, the market looks set for increasing chop ahead of Yellen. It would seem the bulls will manage to hold the key low of 1812 before the CEO of PRINT central will inspire a week of upside. Right now, target is 1960/70 zone, with VIX <20. 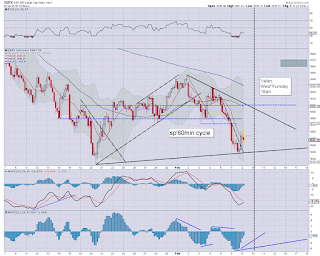 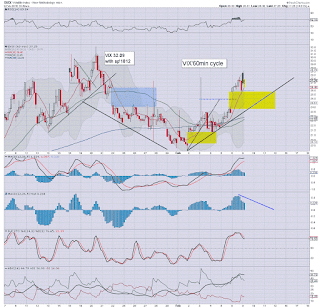 The only hurdle for the market to cope with between now and Yellen is Oil. The API report is due AH, so that will probably sway things a little overnight/early tomorrow.

-
DIS earnings at the close... considering the stock has imploded from the $119s to the $89s..   -a fall of -24% since last November, a bounce would be natural.. regardless of whatever EPS/rev' they provide.
-
Posted by Trading Sunset at 15:50:00
Email ThisBlogThis!Share to TwitterShare to FacebookShare to Pinterest

US equities open lower, but there is a rather clear reversal underway. Notably, the opening VIX candle is a classic black-fail, and those are not to be dismissed lightly. For the equity bulls... Yellen still remains a frustrating day away. 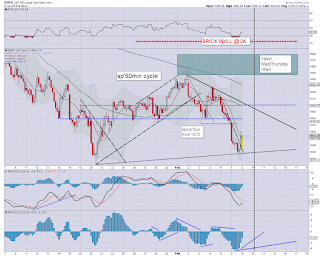 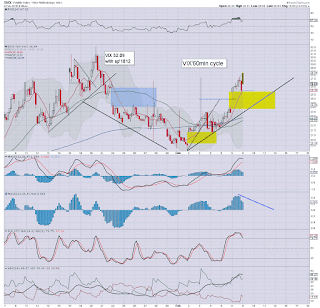 So, an early low of sp'1835.. and we have a rather classic opening reversal, as the equity bears seem exhausted.

First soft upside target is the 1880/1900 zone... and that is certainly viable tomorrow once Yellen's press release appears. 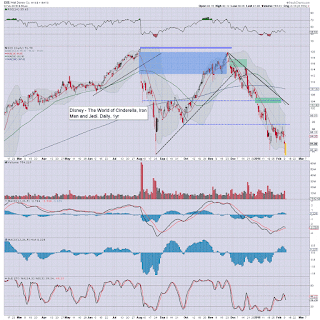 Yesterdays candle was pretty spiky... and it seems probable we've just seen a pre-earnings low of $89.05. First upside target is the 97/98 zone... which will be hit if sp>1947 within 7-10 days.
Posted by Trading Sunset at 14:50:00
Email ThisBlogThis!Share to TwitterShare to FacebookShare to Pinterest 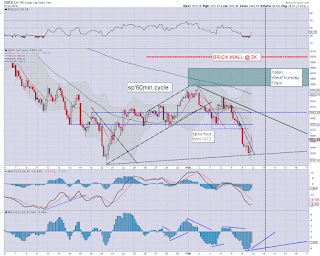 Its merely a case of whether the market can hold the recent low of sp'1812... before the Yellen appears tomorrow morning.

Posted by Trading Sunset at 12:35:00
Email ThisBlogThis!Share to TwitterShare to FacebookShare to Pinterest

The past six trading days have been pretty rough for US equities, with the sp' unraveling from 1947 (38% retrace of the Dec/Jan' wave - 2081/1812) to today's low of 1828. Underlying price action is increasingly bearish, and the mid term outlook remains absolutely clear. 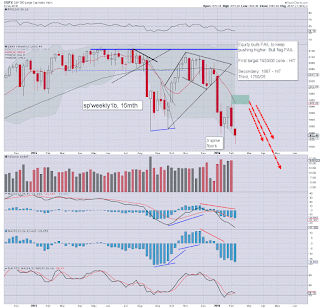 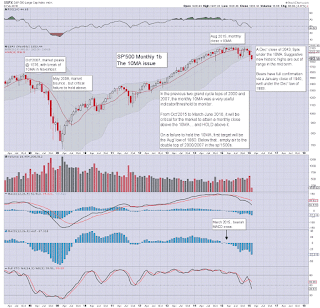 The last six trading days (if you count from the Monday afternoon high of sp'1947), have indeed been a mess.

For now, all that can be said is that there will be a real problem if the Jan'20th low of sp'1812 is broken under.

It is notable that the Nasdaq and the second market leader - R2K, both broke below their Jan'20th lows today.
--

Tuesday will see Wholesale trade data. Clearly though, the market will be more focused on Fed chair Yellen, due Wednesday morning.

Today saw another instance of an overly moody poster, whining about yours truly.

Whenever I get such a message, I usually do a little digging.. 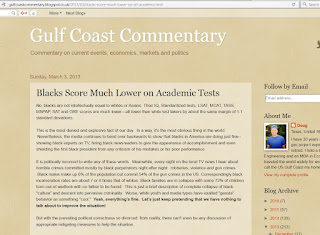 It seems the latest moody reader is someone who wishes to dismiss a large amount of the world population based on the percentage of melanin they have in their skin. I don't need that kind of reader.
By the way 'doug', at least a few of your postings are arguably in violation of Google's T & Cs. Such sentiments are simply not allowed these days.

'You haven't called this market right since at least the beginning of the year'.

At the end of December 2015 we had a very clear bearish close, with the sp'500 finally settling below the key monthly 10MA. Other world markets also reflected this. My outlook - posted Jan'3rd was thus outright bearish, calling for the 1600s this spring/early summer.

With just a little more digging...


Trying to find an acceptable setup

With the mid term trend now unquestionably bearish, I have a general 'no longs' rule. Its merely a case of finding a tolerable level to short from.

I realise some out there are far more flexible, trading in/out each day... that is not currently what I wish to do. I'd rather take a large strategic market short from a decent level, and not have to worry about it.
-

As market volatility increases in the weeks and months ahead, many are going to get whipsawed over and over again, and eventually lose their head.

No one can blame good/bad trades on the doomers at Zerohedge.. nor the cheerleading maniacs on clownTV, and least of all... me. I'll keep writing here, and it remains bizarre to think there are those who can't much stand me... but still come to read my posts.

Goodnight from a multi-cultural London
Posted by Trading Sunset at 04:00:00
Email ThisBlogThis!Share to TwitterShare to FacebookShare to Pinterest 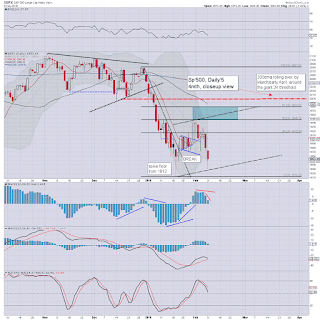 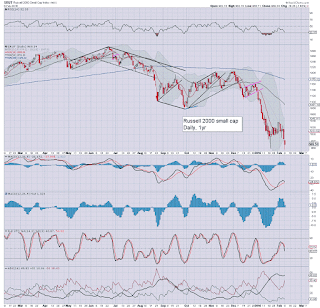 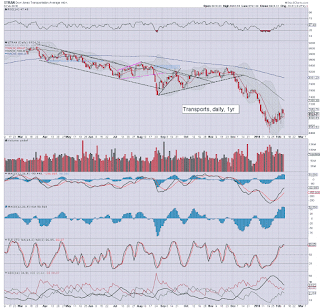 sp'500: a second consecutive significant net daily decline.. coming within 16pts (0.8%) of the Jan'20th low. Right now, best case upside remains a 8-10 day rally to the 1950/70 zone. Sustained action above the 2K threshold looks out of range until the late summer.

It should be clear though, if 1812 fails to hold, there would be increasing downward pressure, with next support in the 1750/25 zone.

Best guess..renewed upside >1947, but clearly, its a very borderline situation, with the Nasdaq/R2K suggesting the main market will continue falling.
--


R2K: a marginal break of the Jan'20th low.... although the closing daily candle was somewhat spiky, offering a short term low of 955.

Trans: price structure remains a very clear multi-week bear flag. At best, upside to the 50dma around 7200 in just over a week.