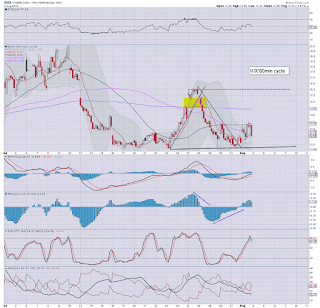 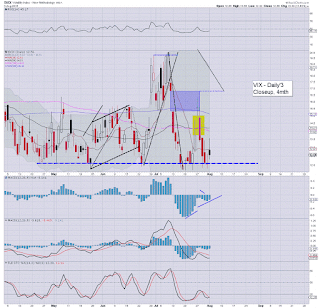 Despite the closing hour weakness, today is day'1 UP of a new cycle. Last weeks high of 16.27 looks a valid target this week. Whether we max out in the 16s, 17s.. or even somewhat higher.. difficult to say. 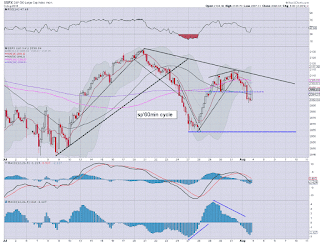 ... a second day for the equity bears.

Those seeking new historic highs in the sp'500 in the near term are facing a real problem right now. This is reflected in the bigger weekly/monthly cycles, but also in a great many individual stocks.

Today, with AAPL losing the $119s, we saw a clear warning signal that one of the more stable stocks has decisively broken.

.. the rest of the market looks set to follow across the next two months.

3pm update - a second day for the bears 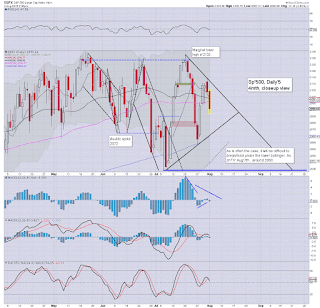 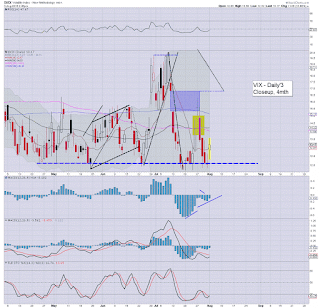 Clearly, we're set to close lower for the second consecutive day, now its a case of how low can the current cycle go.

Considering the current 5/15min cycles, renewed weakness into the close looks due.
-

back at the close.
Posted by Trading Sunset at 19:49:00
Email ThisBlogThis!Share to TwitterShare to FacebookShare to Pinterest

With key technical breaks on a number of individual stocks (today, notably AAPL), there is increasing clarity about the outlook across the next few months. The Dow looks headed for the 17k threshold, with the sp' back to the 2050/25 zone. A break under 2K looks out of range in the current cycle. 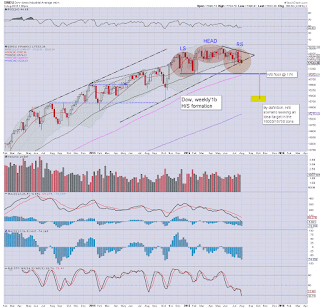 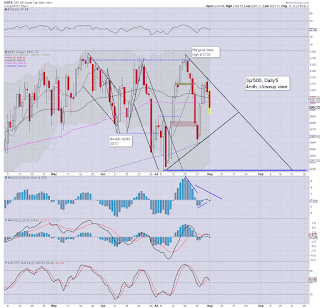 So.. here we are.. a little morning chop.. but with few buyers.. the market has broken lower.

Right now, the key break in AAPL should flag up all sorts of warnings for those broadly long the market.

Consider the implications if DXY 120s next year.
Posted by Trading Sunset at 18:53:00
Email ThisBlogThis!Share to TwitterShare to FacebookShare to Pinterest

The underlying weakness is starting to show through again, with equity indexes breaking new intraday lows. It remains the case that a daily close under sp'2090.. along with VIX 14s will offer clarity that new lows (<2063) are due within the next 4-7 trading days. 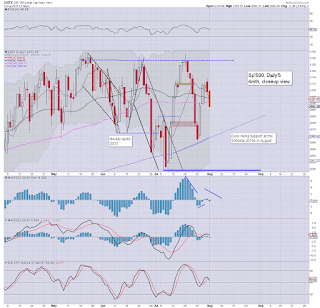 ... besides the indexes, there is a truck load of notable weakness out there... 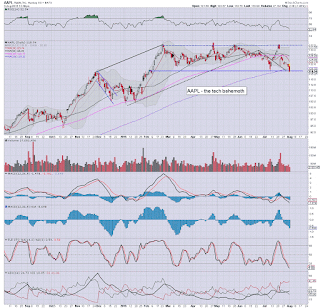 The break into the $118s is HUGELY significant for AAPL, and arguably the broader market. Target is the 105/100 zone.
-- 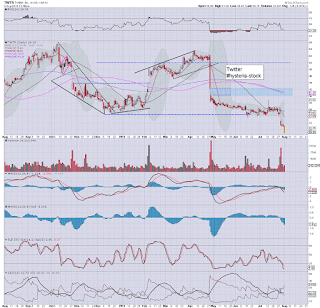 --
stay tuned :)
Posted by Trading Sunset at 17:50:00
Email ThisBlogThis!Share to TwitterShare to FacebookShare to Pinterest

US equities remain subdued, choppy, and continue to lean on the weaker side. A daily close under sp'2100 (along with the 50dma) looks due.. with VIX begining a new up wave. Metals and Oil remain broadly weak.. as the USD remains close to the giant DXY 100 threshold. 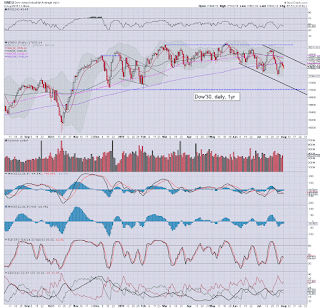 *I highlight the Dow as its arguably now leading the way lower, and the large caps' remain highly vulnerable to a stronger USD
--

We've already seen a hint of the underlying weakness, and from a pure cyclical perspective, everything is currently lined up in favour of the equity bears... including the following....

...few will have noticed.. or likely care, but US bonds are set to breakout.... with a probable two months of upside into late Sept/early Oct. 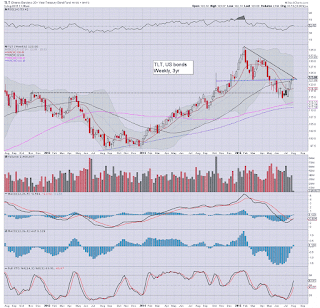 Any action in the $118s... and its a major problem for the bull maniacs.
Posted by Trading Sunset at 16:49:00
Email ThisBlogThis!Share to TwitterShare to FacebookShare to Pinterest

11am update - few buyers at these levels

US equities are bearishly subdued, with the sp' failing to hold the 2100 threshold, along with the 50dma at 2098. A daily close under 2090 - along with VIX in the mid 14s will offer clarity for the rest of the week. USD has turned fractionally negative, but the metals and oil remain weak. 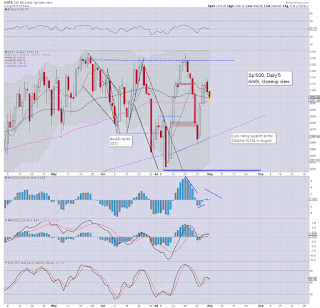 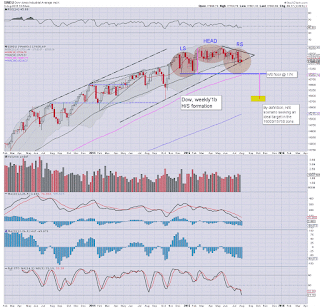 So.. who wants to buy the Dow? The bigger weekly cycle remains ugly... with 17k as first target. Certainly, 17k looks tough to hit this week... but from a pure cyclical perspective... the trend is in favour of the bears.

For now... I'm very content to sit back for a few days... and just be patient on the short side. 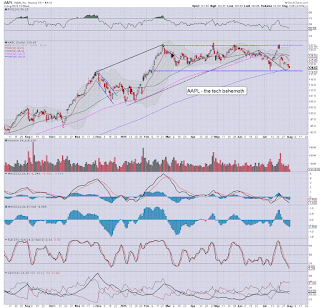 A break into the $118s would be powerfully bearish for the broader market.
Posted by Trading Sunset at 15:58:00
Email ThisBlogThis!Share to TwitterShare to FacebookShare to Pinterest

US equities start the month with some chop.. leaning on the weaker side. Equity bears just need to see some sustained action under sp'2090 to offer clarity of where this week is headed. VIX is back on the rise, in the 13s... the daily/weekly cycle are both offering the 17s this Thurs/Friday. 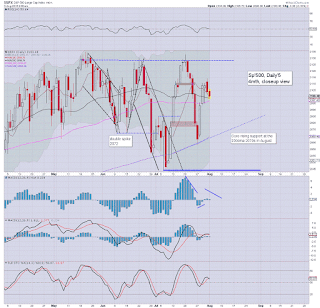 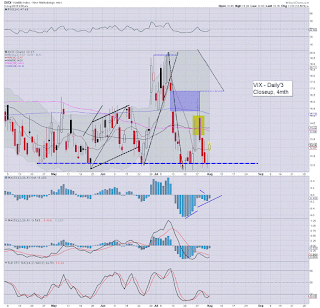 A new month.. and there is an awful lot to cover,, not least with the giant monthly cycles adjusting.

With the VIX having cooled from 16.27 last week... we now have a divergence on the MACD cycle.. which is set to turn positive tomorrow.. or at the latest... Wednesday. The 17s look a valid target... not least if we get a daily close <2090.

strength: DIS +1.1% in the $121s.. ahead of Tuesday earnings.
Posted by Trading Sunset at 14:53:00
Email ThisBlogThis!Share to TwitterShare to FacebookShare to Pinterest 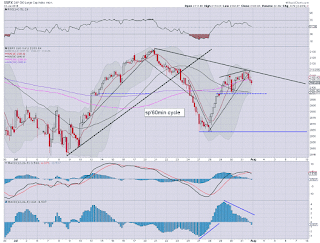 Welcome to August.. the next 8-10 weeks should see the market experience the loss of sp'2000. which in theory.. should result in a further spiral lower.

Equity bears should be seeking a daily close under the sp'2100 threshold.. but there will be particular clarity if <2090... and VIX 14s.

To be clear.. I do NOT expect new highs in the remainder of this year. This market looks damn tired.. and we're sure as hell due a significant correction.

With the Greek market finally opening for the first time since June 26th, the Athex hit an early decline of -23%.... currently -17% or so. Outlook is for the 400s, and that doesn't even assume a GREXIT.
--

China. Despite the Govt' buying and threats against anyone who might dare sell, the Shanghai comp' continues to slide, settling -1.1% @ 3622. The key low of 3373 is easily within range.. and sustained action under 3K looks increasingly likely.