The VIX closed higher by a little over 1%, to settle in the low 14s. 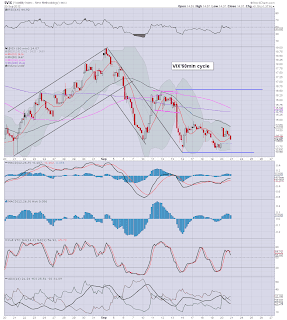 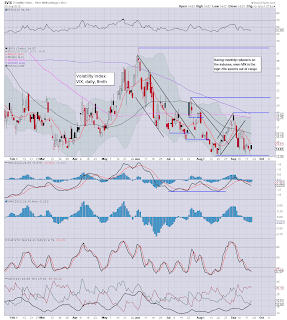 Its arguably there is a possible bull flag on the hourly chart, and with the daily VIX MACD cycle now ticking upward, the bias is towards at least a few days higher.

Considering the near total lack of response in the Dow/SP' today - despite the transports getting destroyed, I'd guess the VIX won't even break into the 17/18s next week.

For the bears, this has to be a very disappointing day.
Posted by Trading Sunset at 23:00:00
Email ThisBlogThis!Share to TwitterShare to FacebookShare to Pinterest

A very tiresome day of near nothing. Despite the transports getting destroyed, everything else is holding up very well. The VIX continues to show a fearless market. 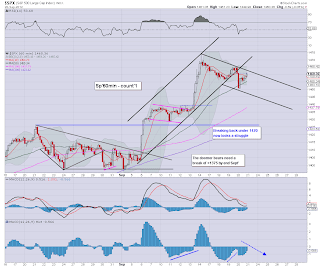 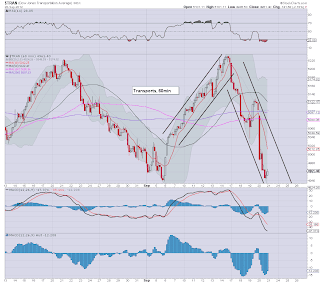 The main indexes are now completely disconnected from the 'old leader'. Whilst earnings warnings/downgrades continue to appear, the main market is able to just ignore it.

*with tomorrow being opex, I guess it'll be mostly a chop fest. I can't imagine any clear direction either way. No point anyone taking any new positions until next week.

A little more later.
Posted by Trading Sunset at 21:02:00
Email ThisBlogThis!Share to TwitterShare to FacebookShare to Pinterest

3pm update - back to the doldrums

Another day where the opening minor declines decay away to next to nothing. Aside from the transports, there is nothing going on again. 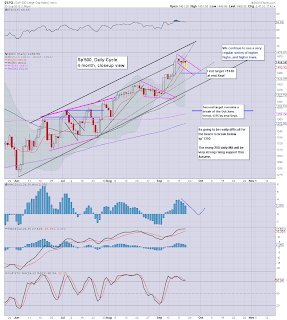 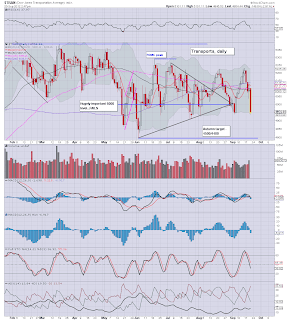 I'm starting to get real tired of this again!

More after the close

Posted by Trading Sunset at 19:49:00
Email ThisBlogThis!Share to TwitterShare to FacebookShare to Pinterest

The minor declines are failing to hold for the main indexes. Meanwhile, the transports is getting destroyed. Yet, what does it matter, QE3 is underway, who needs to transport goods anymore? The Bernanke will keep the market propped up until 2014, yes? 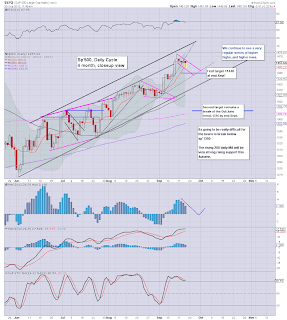 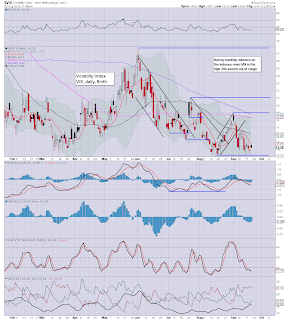 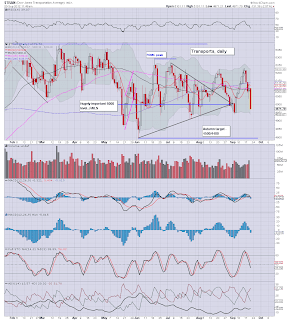 Its all minor noise, and frankly there is no sign of it looking much better for the bears tomorrow.

The VIX is again trying to tick higher on the daily cycle, but...really, its to be dismissed as noise.

Back at 3pm
Posted by Trading Sunset at 16:51:00
Email ThisBlogThis!Share to TwitterShare to FacebookShare to Pinterest

Good morning. Some moderate declines for the main indexes but VIX remains only 5% higher so far. 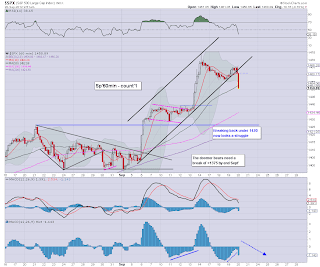 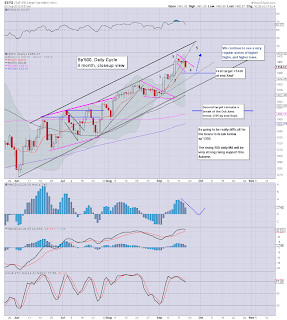 We're still putting in relentless higher highs..and higher lows each cycle. I don't expect us to break below 1440 today/tomorrow. Considering the near total lack of sell side volume, there seems no reason why this market will start breaking lower lows.

With tomorrow being quadruple opex, it'll be choppy, and a clear direction is unlikely. So, I'm seeking an exit today/tomorrow, and look to sit it out across the weekend.

WTIC Oil slipped 3.5% today to close in the $92s. We are close to breaking the broad weekly up trend since the June low of $77. 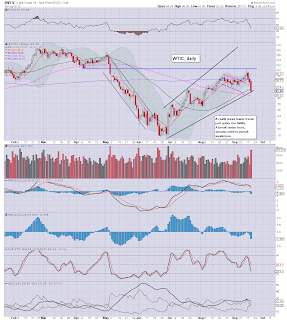 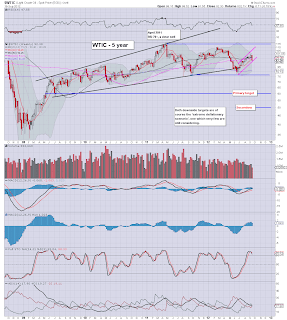 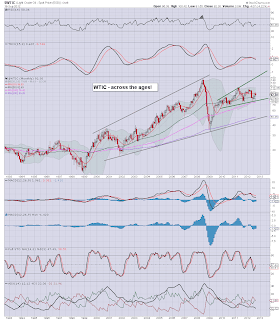 Today's close below the 50 day MA is pretty significant. There are certainly a lot of conflicting issues surrounding the crazy oil market. Whether its post-QE announcement depression (a case of 'post-QEAD'?), fears of Israeli action against Iran, or just an underlying weak global economy, the Oil market remains very mixed.

What is clear, we remain in a significant post June ($77 low) up trend. The monthly cycle is threatening of massively higher prices in the $150/175 range, but for now, first upside target is a daily close of $100.

The doomer bears should be seeking a weekly close <$90, although if it takes until the end of next week, that is fine too. Considering the recent weakness in the transports, could be close September with two red flags?


Deflationary pressures, despite the Fed

The petroleum based economy that we live in would certainly benefit from even a few months of Oil back in the low 80s/70s. The notion of Oil back in the 60s..even 50s, appears near impossible right now, not least with the middle east seemingly ready to explode at any time.

Long Oil, via UCO? Once the daily cycle levels out - whether its the end of this week or next, it would appear to be a very valid trade consideration, not least as a hedge against a 'Sunday night surprise' from the Israelis.

A pretty dull day, with most indexes closing fractionally higher. With the VIX 2% lower in the 13s, this market is unquestionably still fearless, its all bizarrely remarkable. 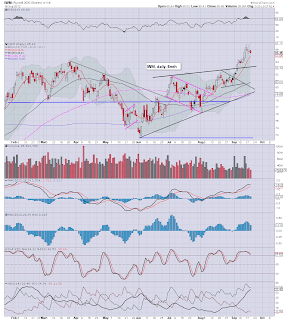 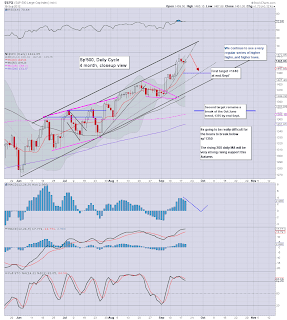 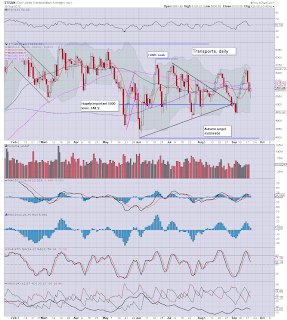 Its been around 3 months since we closed significantly lower - see June'21. Until we see a similar down move, with VIX in the 18/20 range, the bears - not least the 'doomer' ones, are really still fighting a fierce up trend.

The underlying MACD (blue bar histogram) cycle continues to decline, but in price terms, we sure aren't seeing much of anything to the downside. We're a mere 13pts from last weeks QE3 peak.

I still can't see a break below the recent important low of 1397.