It was a bullish week for US equity indexes, with net weekly gains ranging from 1.4% (R2K), 0.7% (sp'500), to 0.4% (Trans). Near term outlook offers upside into end August/early September of 1-2%. Recent breaks of core rising trend in the R2K and NYSE comp', argue against any further historic index highs until at least November. 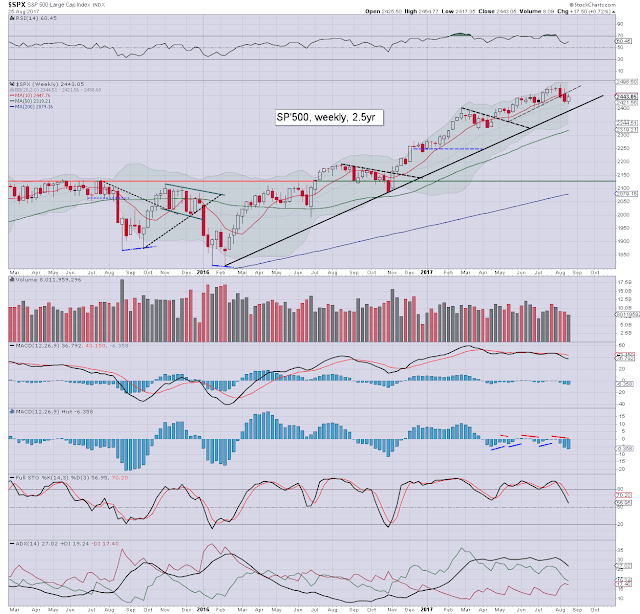 A net weekly gain of 17pts (0.7%), settling at 2443, the third consecutive weekly close under the key 10MA. Core rising trend will be around 2400 next week. Underlying MACD (blue bar histogram) is on the moderately low side, a few weeks ticking back upward, toward the zero threshold into mid September is probable.

Best guess: near term upside to the 2460/70s, before renewed downside to test multiple aspects of support around 2400, certainly by late Sept/early Oct'.

Special note: the recent break of core trend - from early 2016, in the R2K and NYSE comp' argues that other indexes will eventually follow. From the Monday Oct'2nd open onward, equity bears only need to see the market trade <2400 to break multiple aspects of core support. If that is achieved, then the door is open to far lower levels.
-- 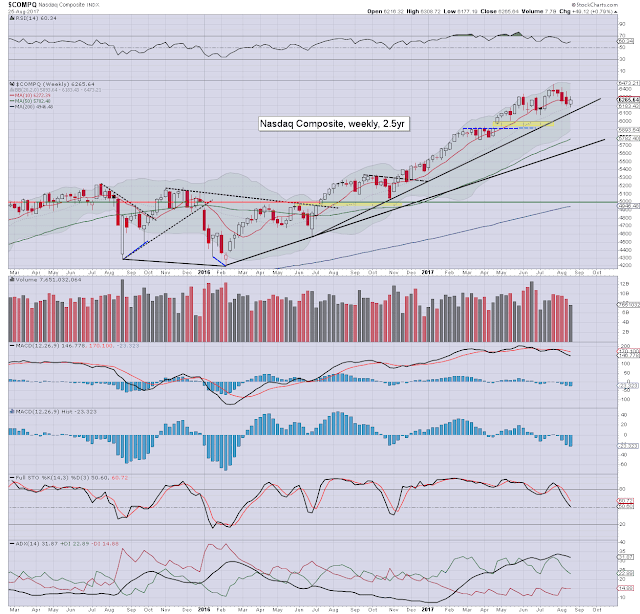 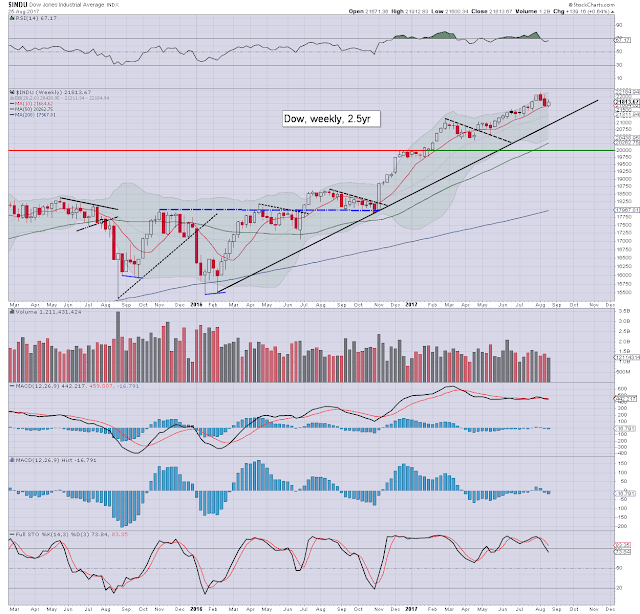 The mighty Dow gained 139pts (0.6%) to 21813. Its notable that the recent historic high of 22179 is a mere 1.7% higher. The Dow is one of the stronger indexes, and has been sustainably holding above the key 10MA since late April. From October onward, if the equity bears can break <21k, its empty air to the giant psy' level of 20k. Further, keep in mind the monthly 10MA will be around 21k from September onward. 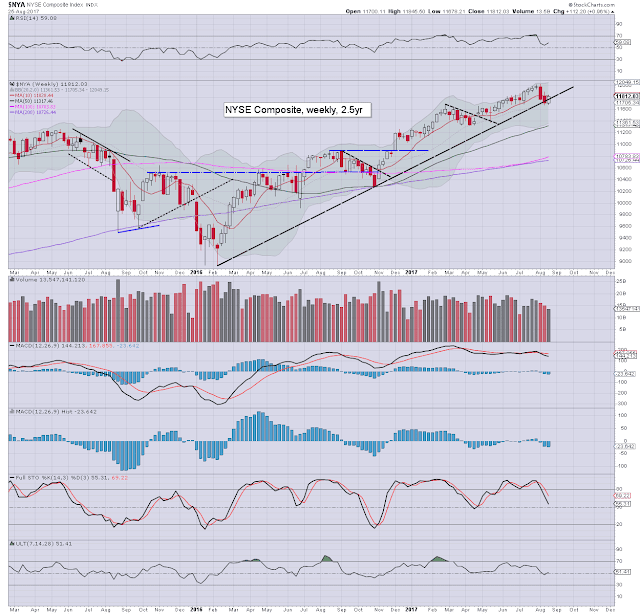 The master index gained around 1.0%, settling at 11812, but remains under the key 10MA. Last weeks break of core trend is important, and would arguably only be fully negated with a new historic high (>12019). If the bulls can only manage a lower high into September, first downside target will be the lower weekly bollinger, which by late September will be around the 11500/400s. 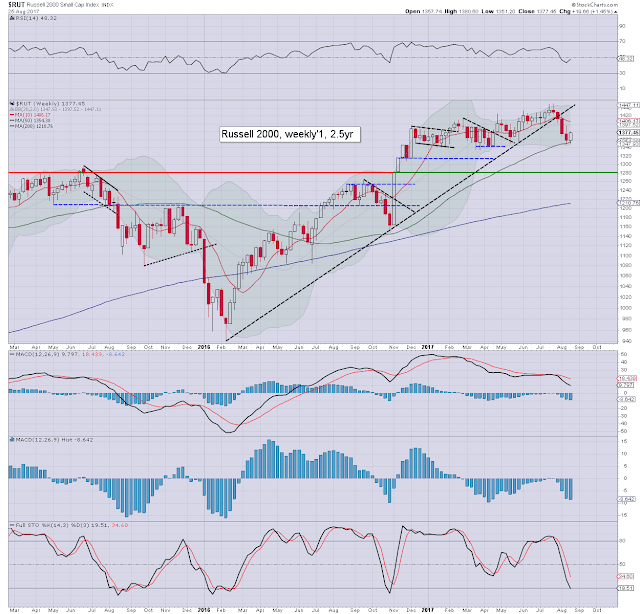 The second market leader - R2K, settled +1.4% at 1377, the first weekly gain in 5 weeks. Underlying MACD (blue bar histogram) is on the very low side, and could easily tick upward for 2-3 weeks. Further upside of around 2% looks probable, with multiple aspects of resistance around the 1400 threshold. Considering the recent break of core rising trend, the July historic high of 1452 looks out of range until at least November. On any renewed downside, first soft target is the 1300/1280 zone. 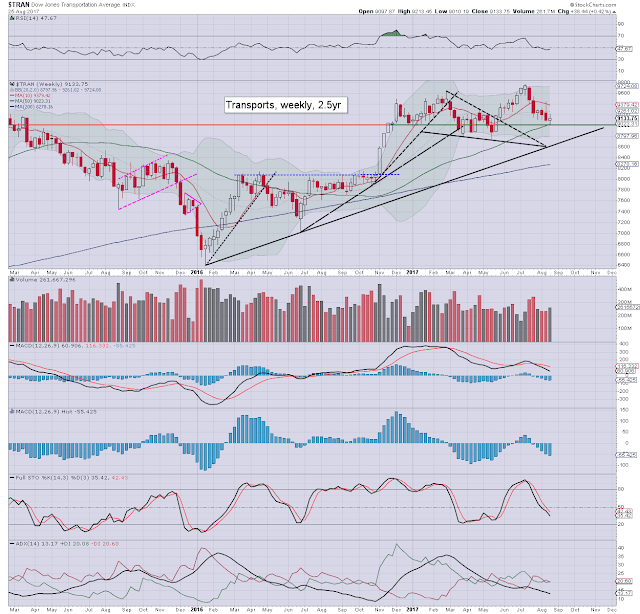 A bullish week for all six US equity indexes, with the R2K leading the way, and the transports still lagging.

Four of the six indexes are still holding core rising trend that stretches back to early 2016. The R2K and NYSE comp' are notably 'broken'.

A near term bounce of 1-2% is highly probable, but considering the R2K and NYSE comp', no new historic index highs can be expected in September. Instead, another wave lower of 3-5% seems highly probable, no later than mid October.

Things would only turn very bearish if a number of indexes ended September under their respective monthly 10MAs.
--

*Monday Sept'4th is Labor day, and the US market will be CLOSED. Friday Sept'1st will thus be inclined to be very subdued, once the econ-data is out of the way, as many traders will make an early escape for the 3 day holiday weekend.
--