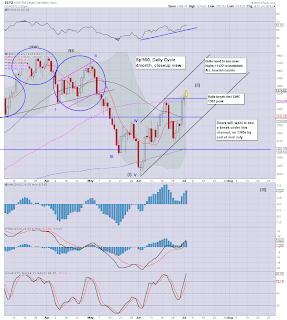 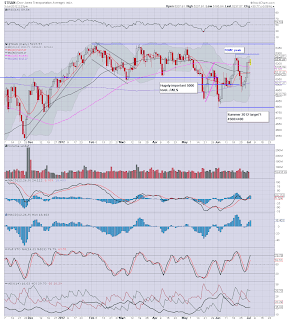 A little more later...
Posted by Trading Sunset at 22:30:00
Email ThisBlogThis!Share to TwitterShare to FacebookShare to Pinterest

With the indexes now closed until Thursday, the VIX closed a touch lower today. Regardless of whether its VIX'18. 16, or 14, volatility is now at very low levels.

As they say..the only way is up. 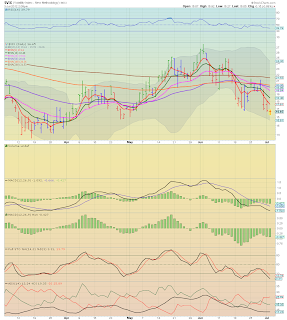 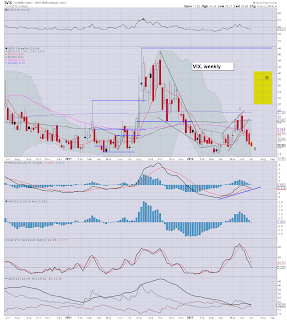 The rainbow 'elder impulse' chart is still showing NO sign of a turn, or even levelling out yet. The bears should look for the next blue candle this Friday.

Assuming the indexes do not break to new highs this month, then VIX still looks set for a jump into the 30s, and possibly 40s.

Well, that was exciting right? 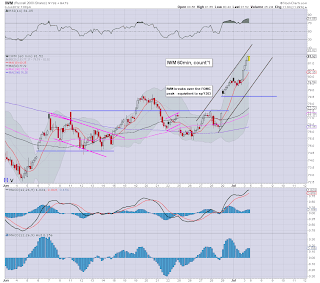 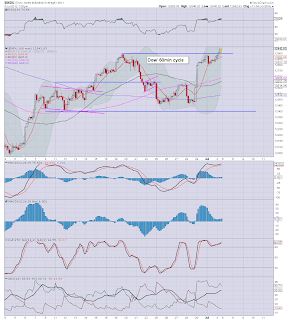 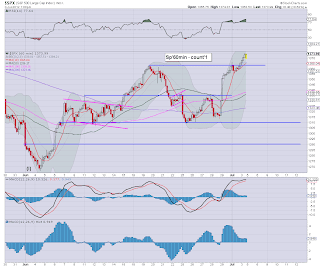 I was watching clown channel earlier (I must be the only UK viewer they have), the headline was 'Bet on a QE3 summer?'. They had the audacity to spend almost an entire hour touting which stocks to buy in anticipation of QE3 later this summer.

So, lets be clear, the cheer leading clown maniacs are still hyping it up...even AFTER a 105pt rally from the sp'1266 low. It remains laughable they somehow believe the Bernanke can do QE3 at these levels.
--

Meanwhile, the Rus'2000 small cap index (see IWM chart) continues to do its usual crazy nonsense. It generally tends to act like a 1.5x leveraged ETF of the SP'500. Were I only aware of this index, then yes, I'd be bullish right now. Yet, the NYSE composite (see previous post), and the Transports continue to warn of weakness on a multi-month basis.
--

*more later this evening, and a few bits and pieces across tomorrow.

Posted by Trading Sunset at 18:02:00
Email ThisBlogThis!Share to TwitterShare to FacebookShare to Pinterest

Of course, for those still long, today's gains are a pre-holiday bonus.

To start this final trading hour of nothing, lets forget the noise...keep focused on the bigger picture 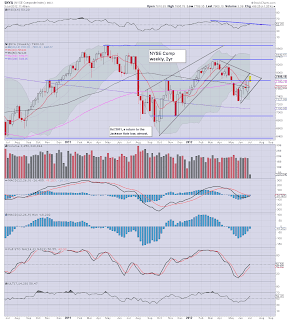 The master index is still below the March peaks. From a MACD cycle perspective, its due to break +cycle next week. Right now, bulls can easily sustain a Friday drop to around 1335/40, with no violation of the short term channel.

Urghh..dull day! There are a few individual stock moves of interest, Ford, FB, and we have the metals/oil showing a bounce.

The only winning move (this one is for you TVIX, UVXY players)...not to play.

With factory orders posting a positive number, the algo-bots seem happy to melt everything slowly upward into Thursday. Yesterday was the lowest volume in a decade, I can't imagine today is any better. 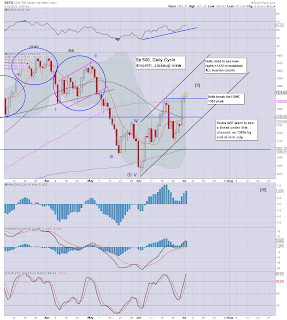 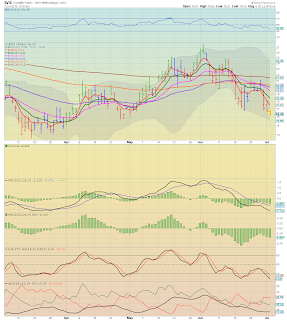 Certainly, NO sign of a turn, or even levelling out in the VIX yet. The TVIX/UVXY holders are buying too early. 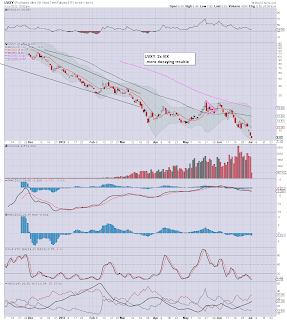 An ugly chart, any the statistical decay is really destroying anyone holding longer than a few days. I see a fair few posters out there who been adding AHEAD of the holiday. That makes zero sense right now, not least if the ECB cut rates, causing a further 1-2% index ramp on Thursday.

Good reading from ZH, on the French, who seem set on taxing everyone to death.

Time for French revolution part dieu ?
Posted by Trading Sunset at 15:55:00
Email ThisBlogThis!Share to TwitterShare to FacebookShare to Pinterest

An even more duller day than expected so far. 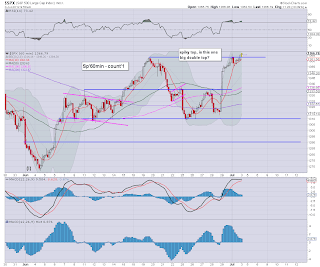 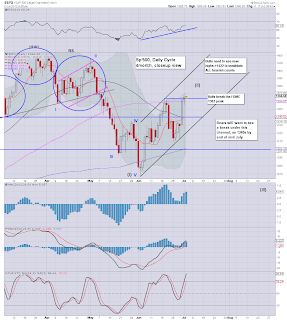 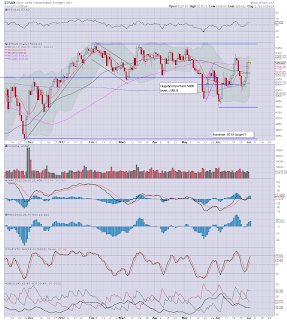 *look at the weakness in the tranny. So far, its the last index yet to break the FOMC peaks. From a cycle perspective, the MACD will very likely be rolling over by Friday.

There is talk the ECB might cut rates on Thursday, so that might be a problem for those bears shorting ahead of the holiday.

More talk on clown channel of disappointing jobs data to come this Friday. They quoted one target of 40/45k. Its almost as thought they are trying to 'soften up' the viewing sheep for a lousy number <50k. Consensus remains 90k, whilst I'm seeking somewhere around 30/35k.

Moody skies here in the city...

More later...
Posted by Trading Sunset at 14:54:00
Email ThisBlogThis!Share to TwitterShare to FacebookShare to Pinterest

Good morning. The NYSE closes early at 1pm today, so there really isn't any point in taking any positions until later on Thursday.

We do have factory orders data at 10am, so that will be something to focus on. Market is expecting a 0.1% increase, after a previous -0.6% fall. I can't fathom why if May was weak, June could be expected to be any better. 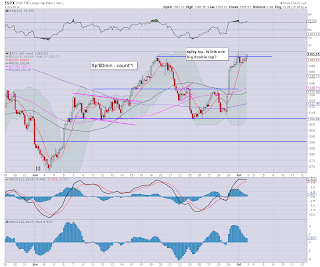 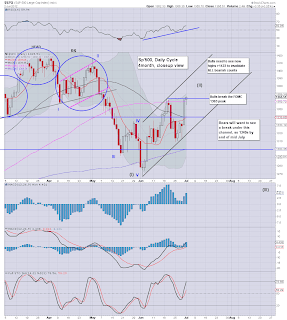 Its another rainy day in London city, and a very short market day is ahead. At least there is a little econ-data to motivate the algo-bots to change their bids a little. Yet, generally speaking 'turn ya screen off..come back Thursday' would probably be better for any normal person.

--
For those of you still wondering, this remains the ultimate 'doomster outlook'. 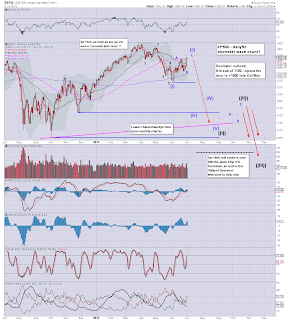 Of course, the clock IS ticking, and if we're not in the low 1100s by mid/late August, this scenario will be thrown out. Simillarly, it also gets invalidated if we break new index highs 1422 at ANY time.

Any 'serious' bear would surely have good short-stops around 1390/1400 at the highest.

Good wishes for Tuesday!
Posted by Trading Sunset at 13:00:00
Email ThisBlogThis!Share to TwitterShare to FacebookShare to Pinterest

July will be an important month

It is a holiday week, so nothing major is likely to happen, although we do still have the monthly jobs data released this Friday.

What is important to recognise is that how July proceeds, will likely be the leader month for the rest of the year. It is notable that were it not for the bizarre and sickeningly stupid hyper ramp from Thursday 3pm, the SP' monthly chart would have closed largely flat on the month. 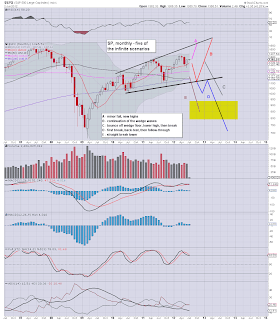 My best guess remains scenario B, but that is predicated on indexes not breaking new highs - equivalent to sp'>1422. It also assumes a turn lower this month, and a break below 1300, and preferably a July close under the June low of sp'1266.

If July can indeed close <1266, then my original monthly cycle target of sp'1150/00 is back on, but it will probably need to be pushed out to end August.

For Tuesday trading we do have factory orders data at 10am, so there is at least a little to keep a few people interested Yet as ZH noted today, trading volumn was the lowest in TEN years. It is indeed a largely dead market..with just a few old timers left, and a couple of server rooms filled with those nasty HFT algo-bots.

Most of the main indexes all closed above their FOMC peaks - equivalant to sp'1363. 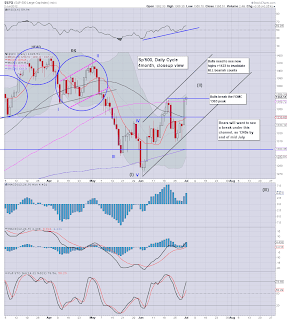 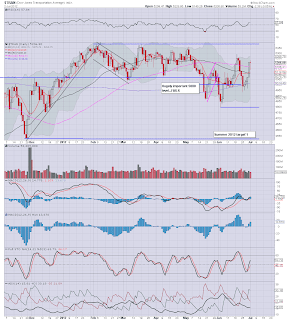 The sp'500 close of 1365 was certainly something many bulls will be pleased with. That does open up 1370/80 for Tuesday/Thursday.

--
*remember, the US market closes early Tuesday 1pm, and is shut entirely on Wednesday!
Posted by Trading Sunset at 00:00:00
Email ThisBlogThis!Share to TwitterShare to FacebookShare to Pinterest
Newer Posts Older Posts Home
Subscribe to: Posts (Atom)