US indexes saw their first net weekly declines in around a month, ranging from just -0.2% (R2K) to -2.0% (Transports). The broad mid term trend remains starkly bullish, and there looks to be high probability that all indexes will be breaking new multi-year highs into July. 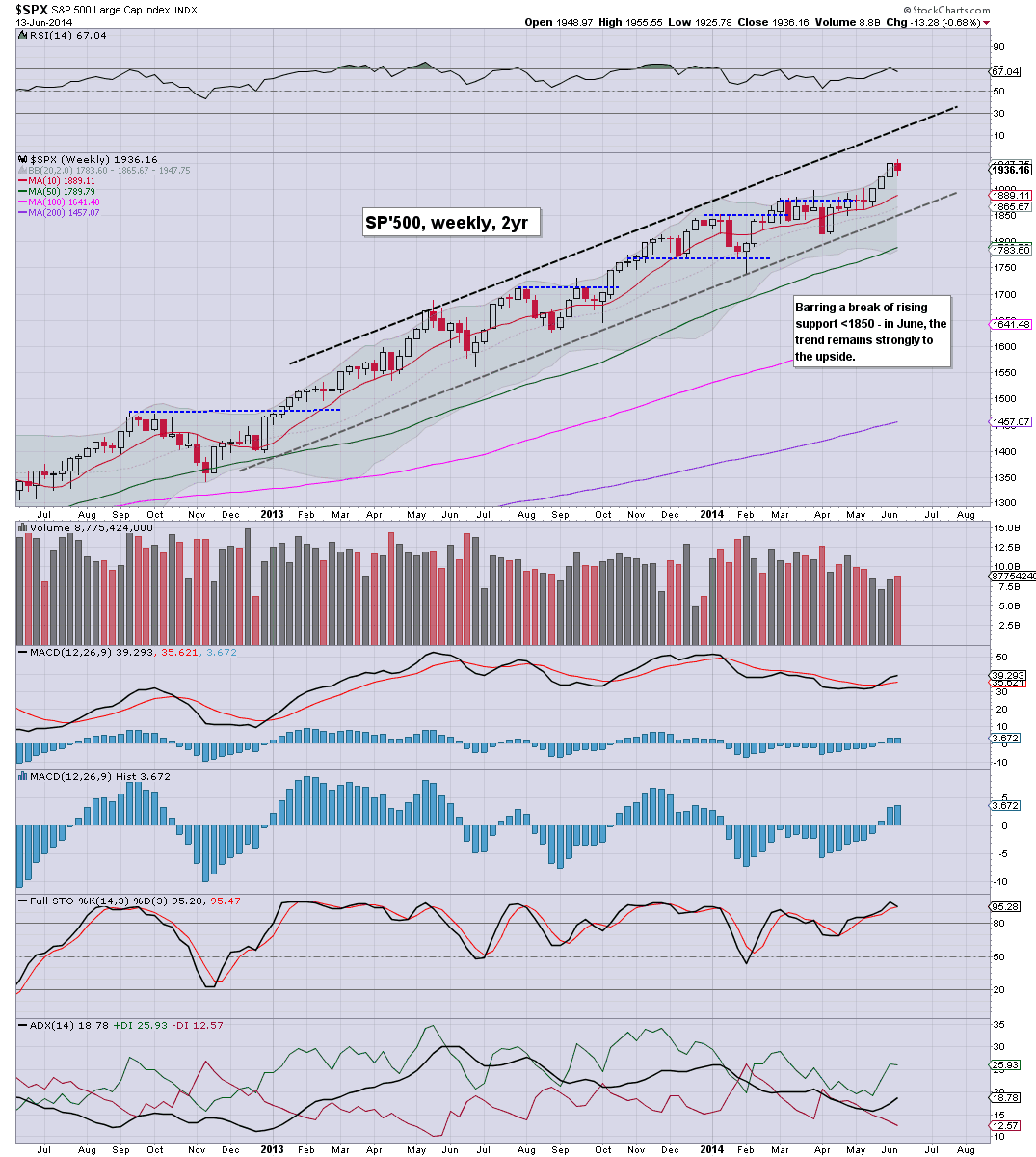 The sp' slipped around -0.7% this week, but the broader trend remains intact. Underlying MACD (blue bar histogram) ticked higher for the ninth consecutive week, and there is simply nothing bearish here.

First key support is the 1900 threshold. Weekly charts will be offering the 1960s in FOMC week, and continue to rise around 9-12pts a week. The 2000s will be viable in mid July, although I still think the market will max out just short of that level. 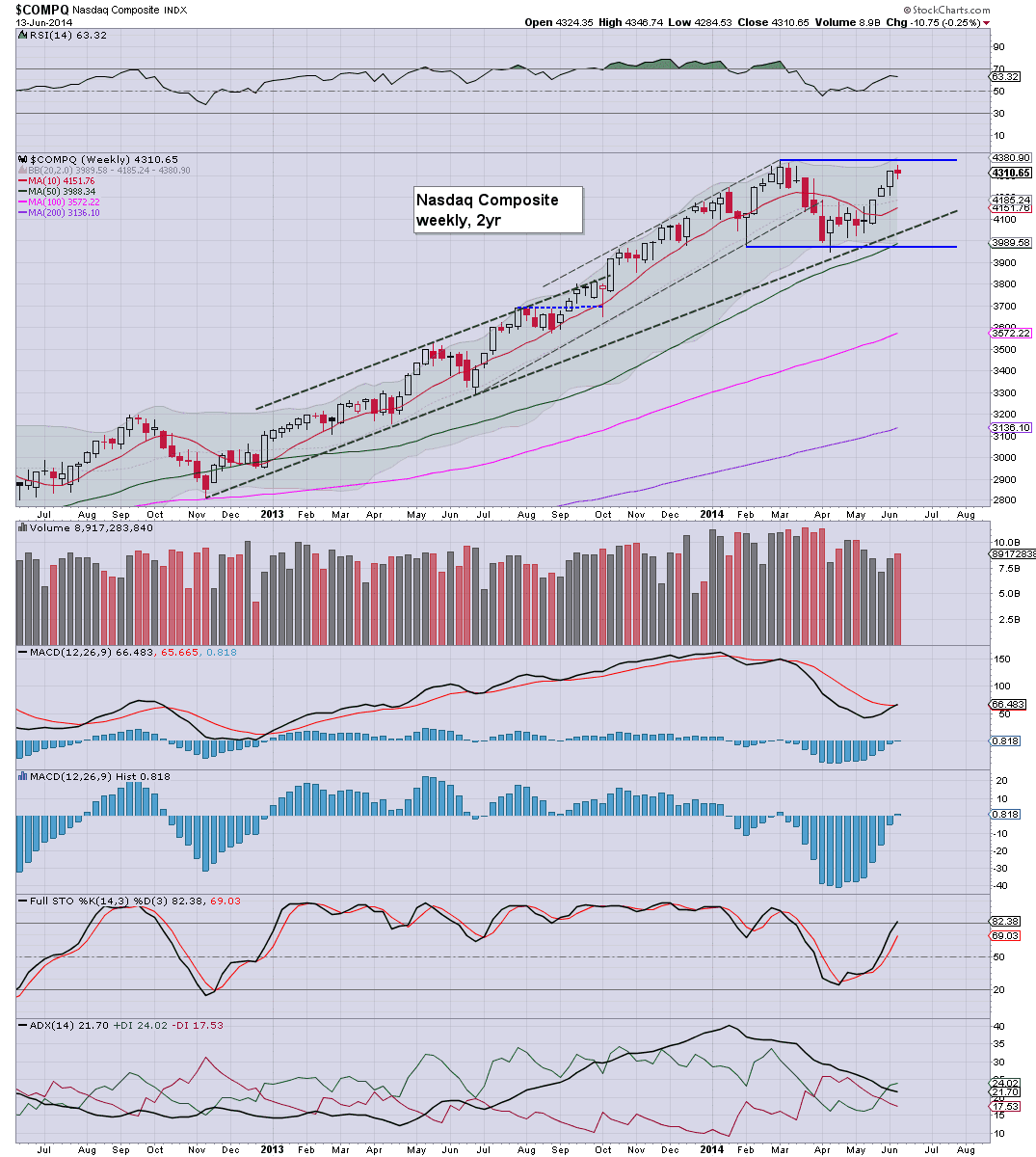 The tech' remains very close to breaking the multi-year high seen in early March. I expect the Nasdaq composite will break into the 4400/4500s by mid July. 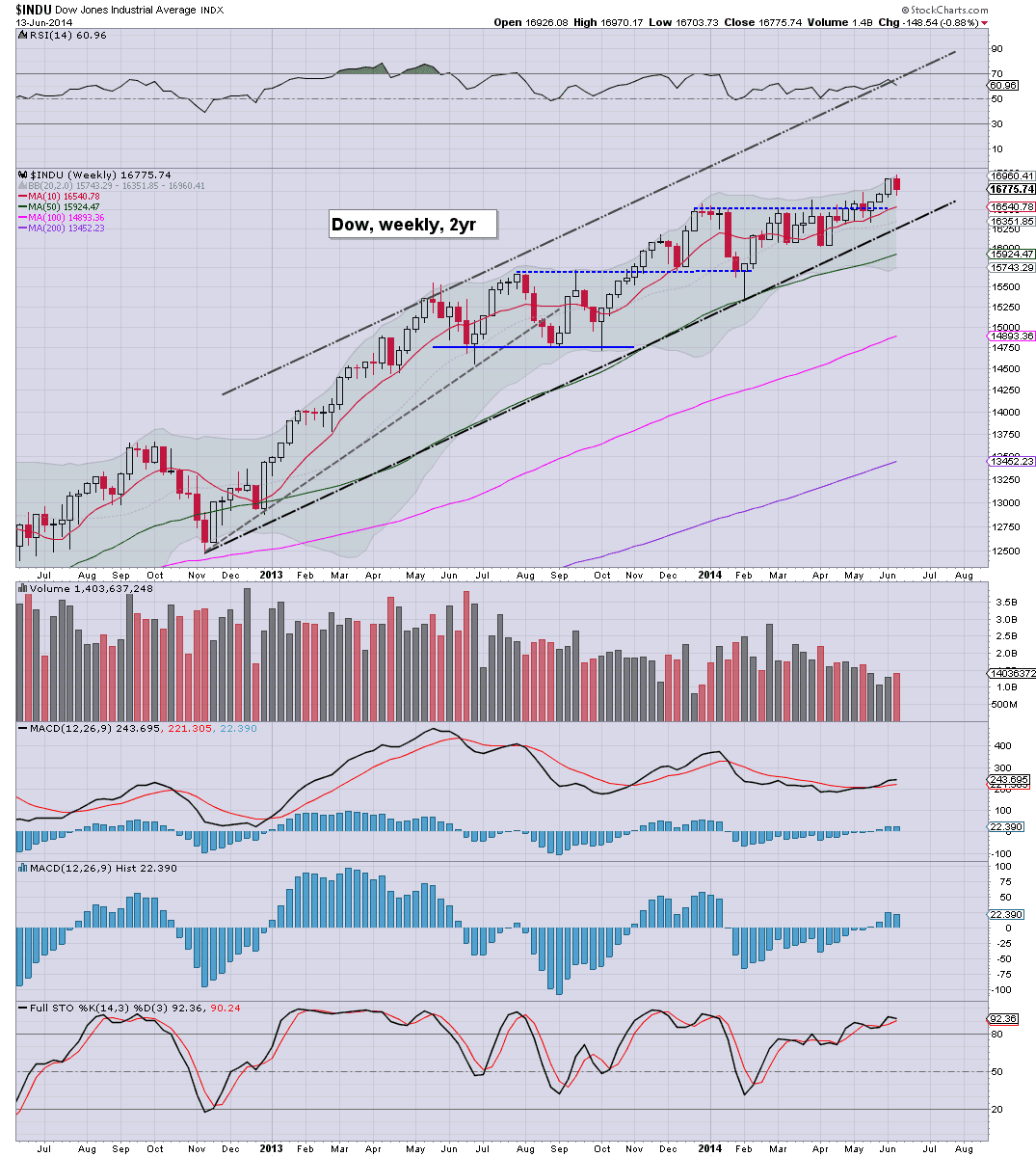 The mighty Dow fell -148pts this week, but that only amounts to 0.9%..and certainly doesn't rate as 'significant'. There looks to be viable upside to the big 17000 level in FOMC week. Until the equity bears can take out the big 16k threshold, there is simply nothing bearish. 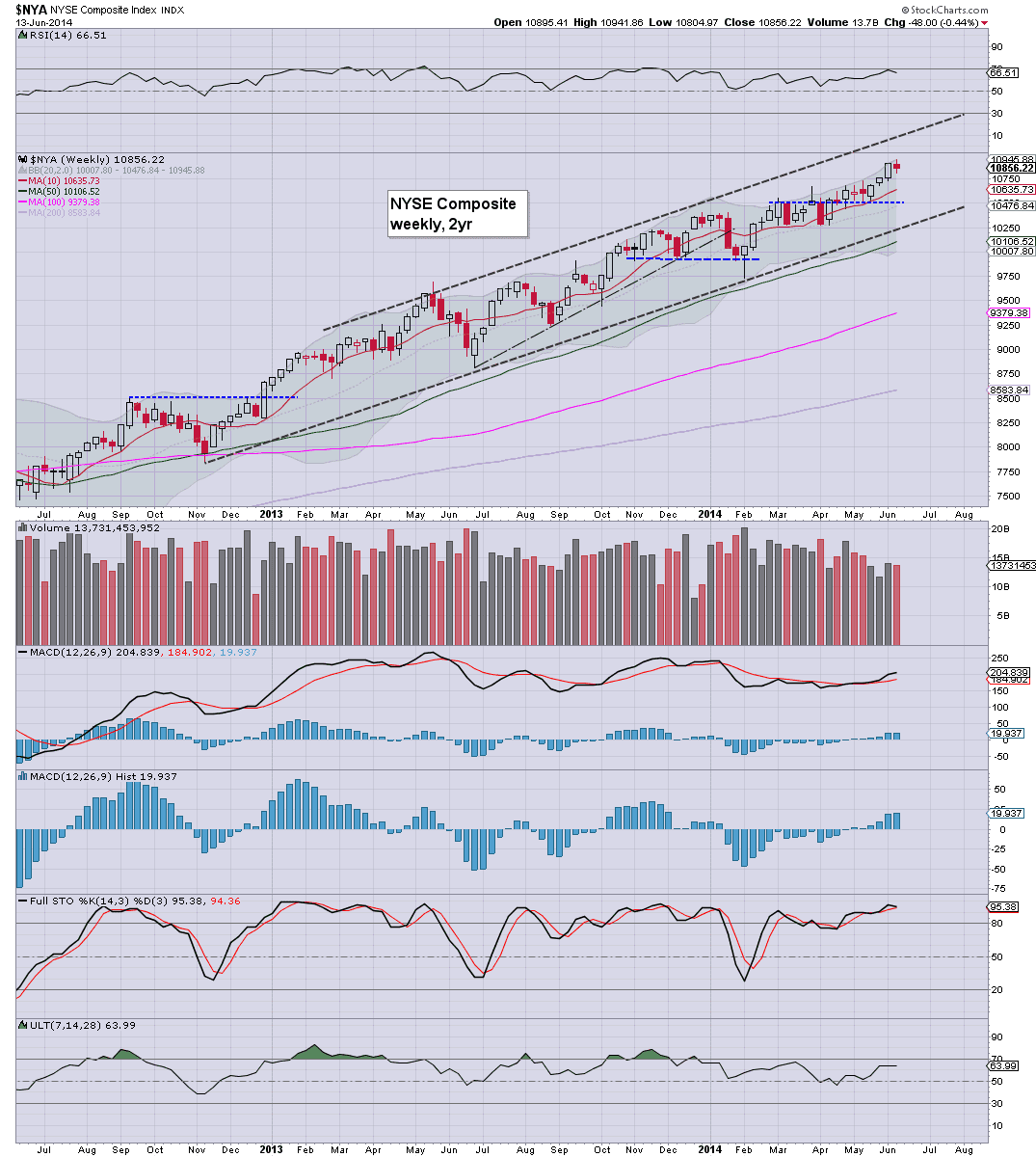 The master index slipped just -0.4% this week, and looks set for the 11000s by mid July. Broader trend remains consistently to the upside, although we'll be due another multi-week down wave by late July. 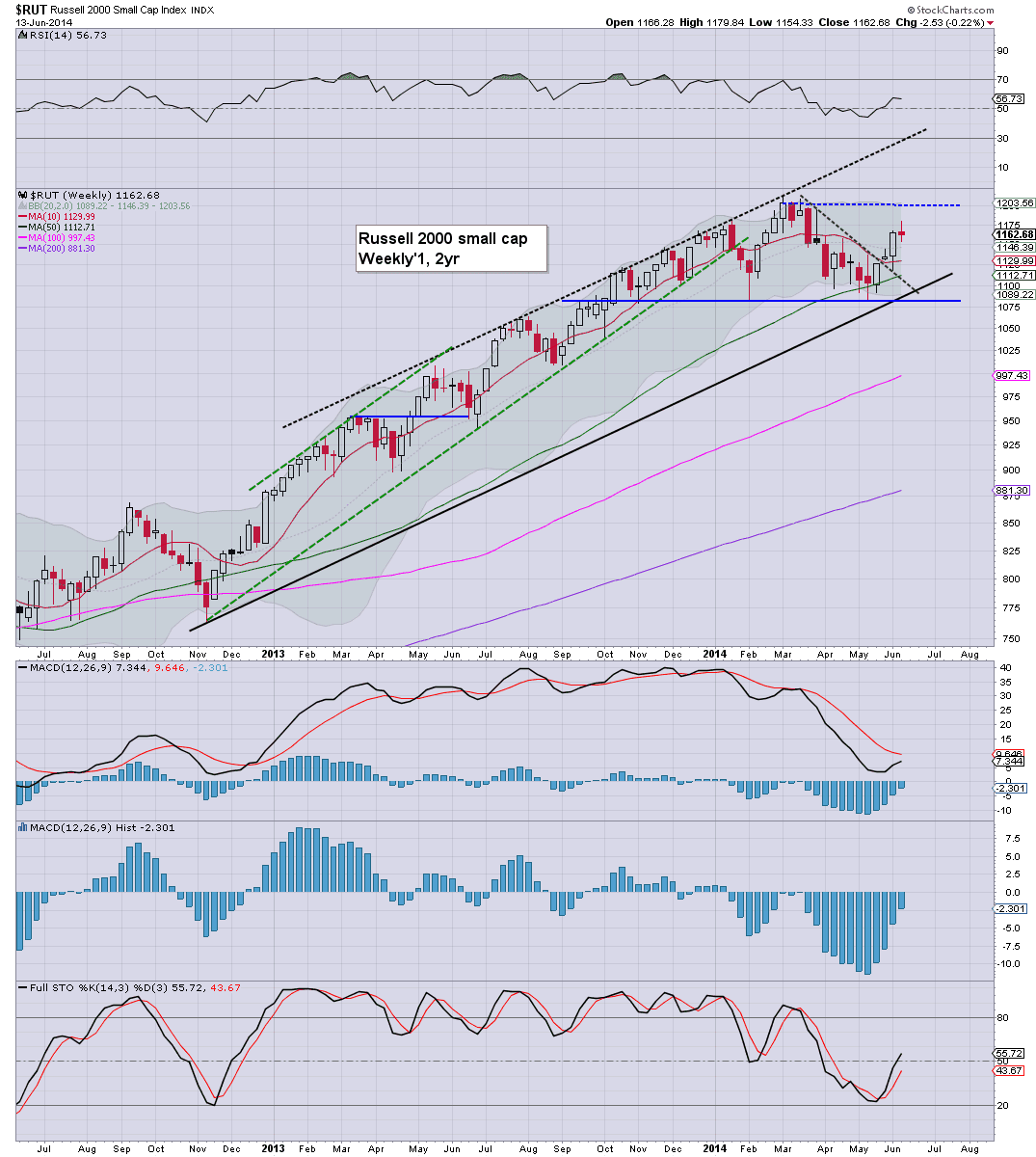 The second market leader lost just -0.2% this week, and looks set for new historic highs into July. Despite getting stuck at what could be a right shoulder - of a very large H/S formation, I no longer consider that remaining bearish scenario viable.

R2K looks set for the 1190/1200 level in FOMC week, which will invalidate the H/S scenario. The 1225/50 zone looks viable by mid/late July, at which point I will be looking for another rollover. 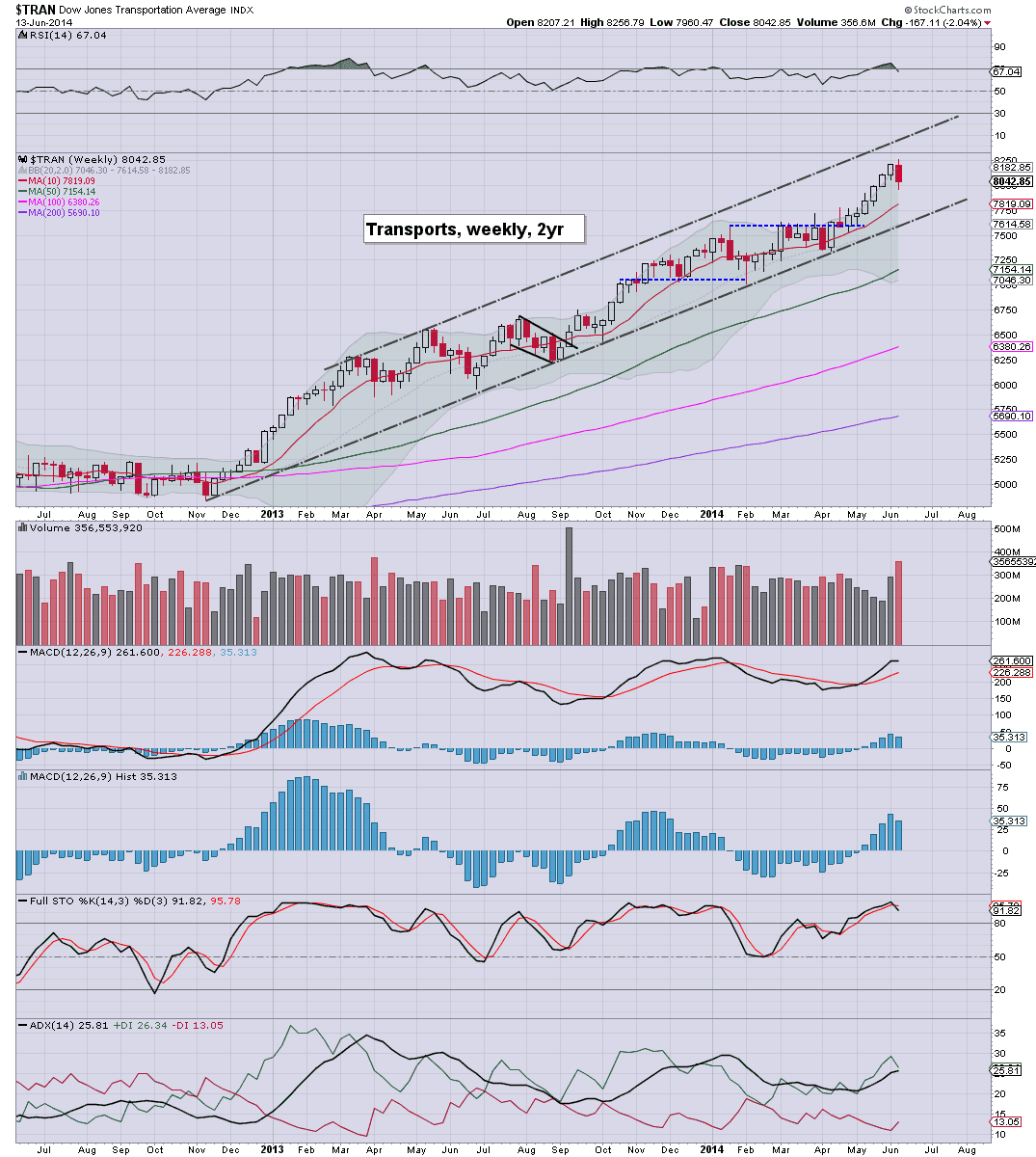 The 'old leader' - Transports, was particularly hit hard this week, seeing a net weekly decline of a rather significant -2.0%. However, the trans has gained so much in recent months, this decline doesn't do anything to break the broader trend. There looks to be valid upside into the 8400/8500s by mid July.

So... net weekly declines (the first in at least 4 weeks) for all the US indexes, but in the scheme of things, the declines were very minor - aside from the Trans.

The week begins with Empire state manu', indust' prod' and some housing data. Tuesday will see CPI and housing starts.

The big event though... the FOMC announcement of Wed', 2pm. Market is expecting QE-taper'5, taking monthly QE down to $35bn a month beginning in July. Yellen will host a press conf' around 2.30pm.

Thursday has jobless claims and phil' fed. The week concludes with a quad-opex, and we'll likely see some significant price chop. In the past few quarters, such an opex has favoured the equity bulls.

Yours truly is endeavouring to remain 'unbiased', if such a thing could remotely be possible for someone self-titled 'Permabear'. I am holding 3 positions, CHK, WFM, and an index long (IWM). I will most certainly seek to clear the decks before the FOMC announcement of next Wednesday.

Next week should offer opportunities for bulls... and bears alike. Hopefully, I'll be able to get a good exit out of my longs, and if we are trading in the sp'1960/70s, I'd even consider a very short term index short position.

Despite a down wave from sp'1955 to 1925, the broader bullish trend remains very much intact. Equity bulls look set to push higher next week, with viable upside to the 1960s, possibly 1970/75 on an FOMC spike. From there... another wave lower into late June. 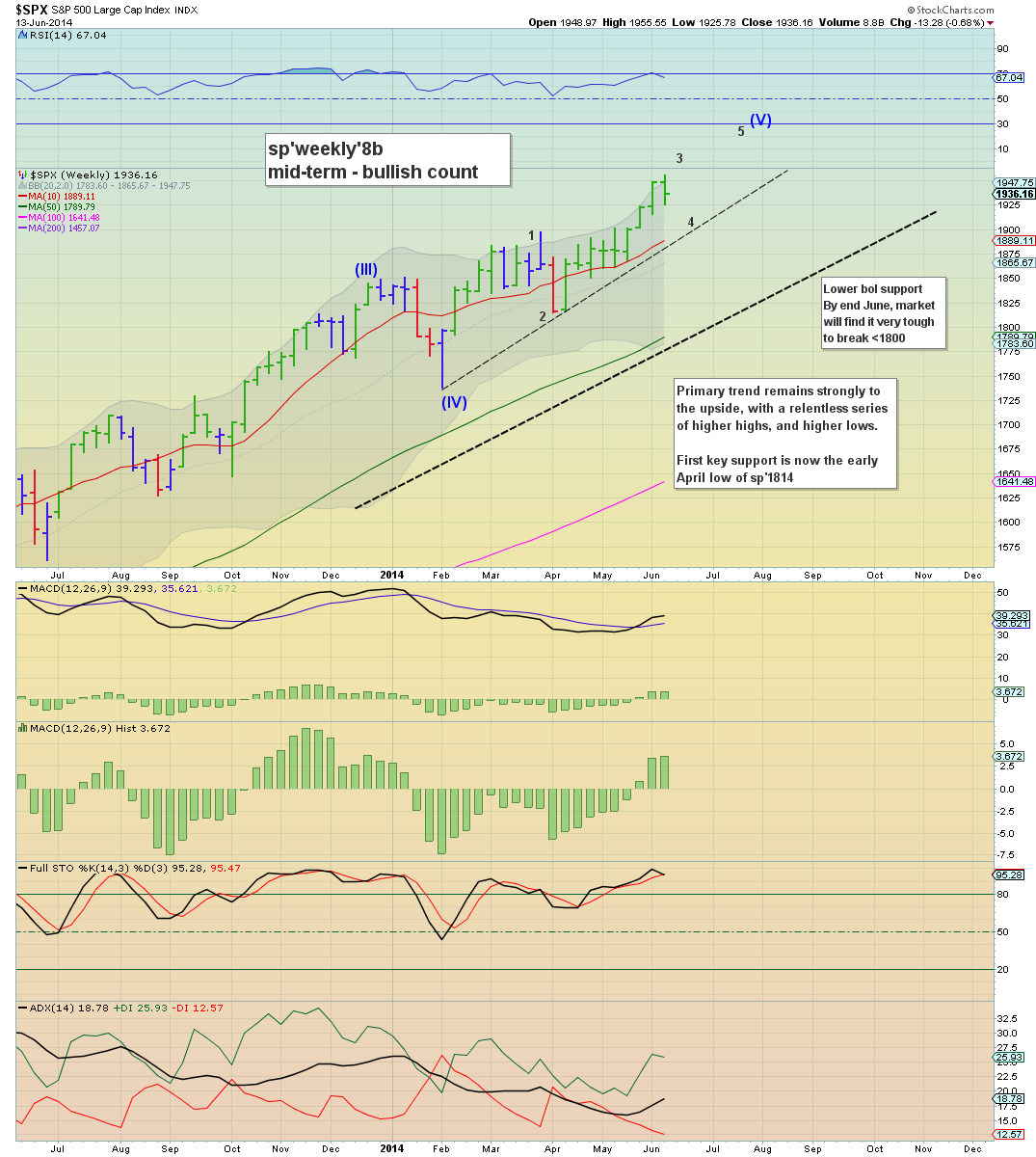 *the above count on weekly'8 remains my mid term 'best guess', but as ever..one day at a time.
--

So..a 30pt down wave...which is not even 2%. I still think many traders - especially the doomer bears, are getting lost in the minor noise. The primary trend - as better seen on the weekly/monthly charts, remains outright bullish.
-

*I hold long across the weekend, via CHK, an index block, and WFM. I will seek to offload before the FOMC announcement of next Wednesday (2pm).

US equities closed moderately higher, sp +6pts @ 1936. The two leaders - Trans/R2k, settled higher by 0.7% and 0.3% respectively. Near term outlook is for renewed upside into the FOMC of next Wednesday, with the sp'1960/70s possible at that time. 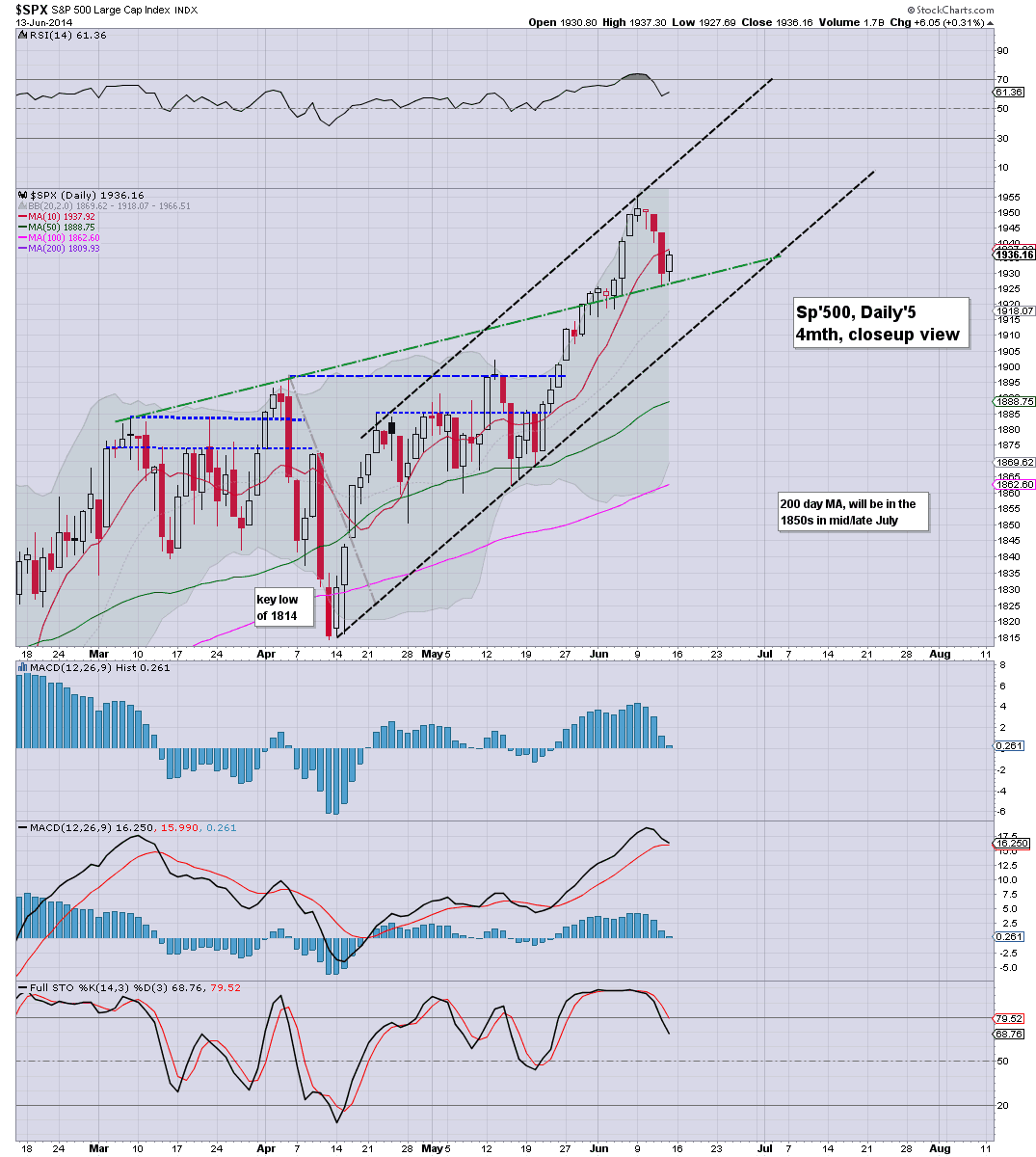 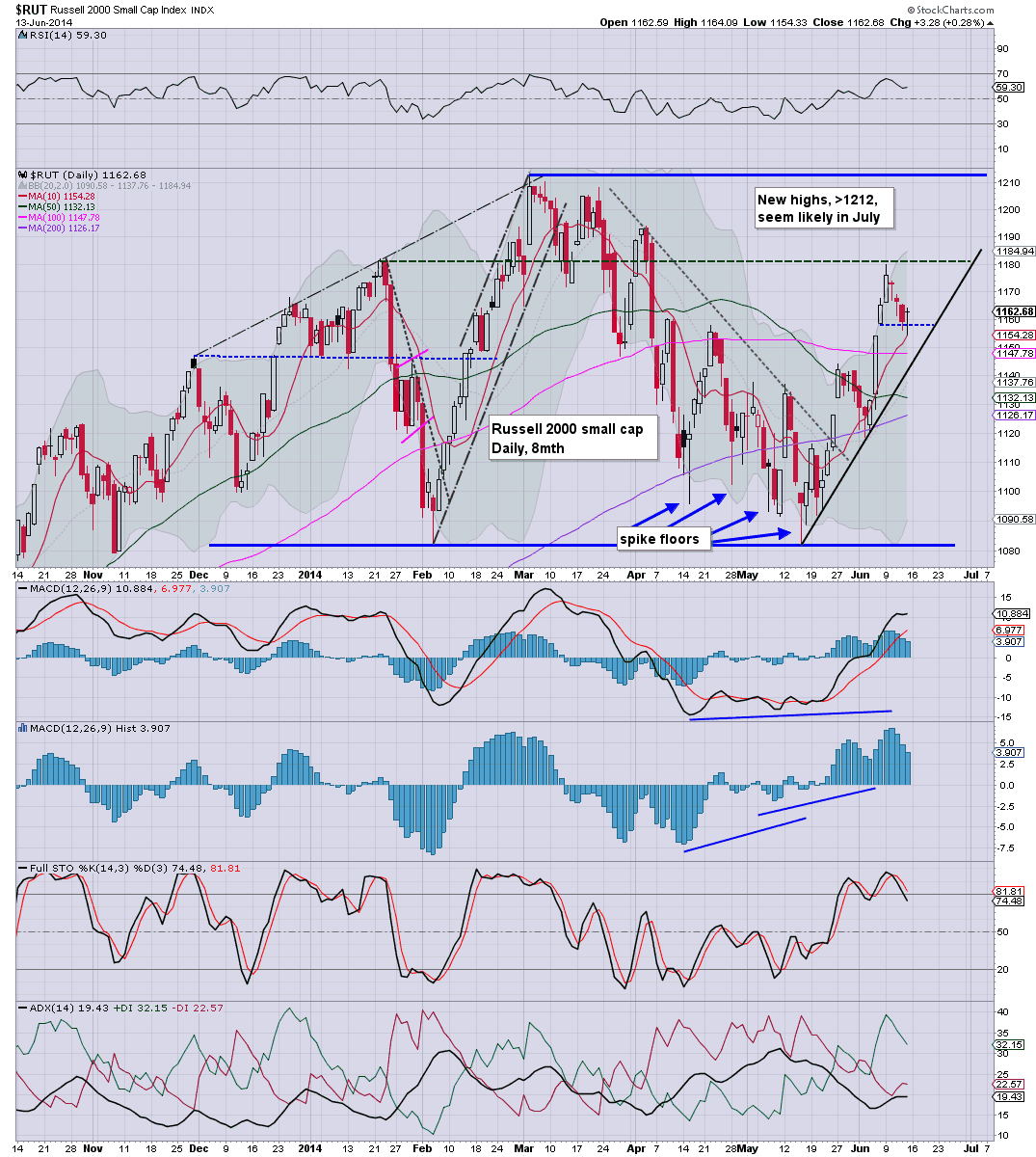 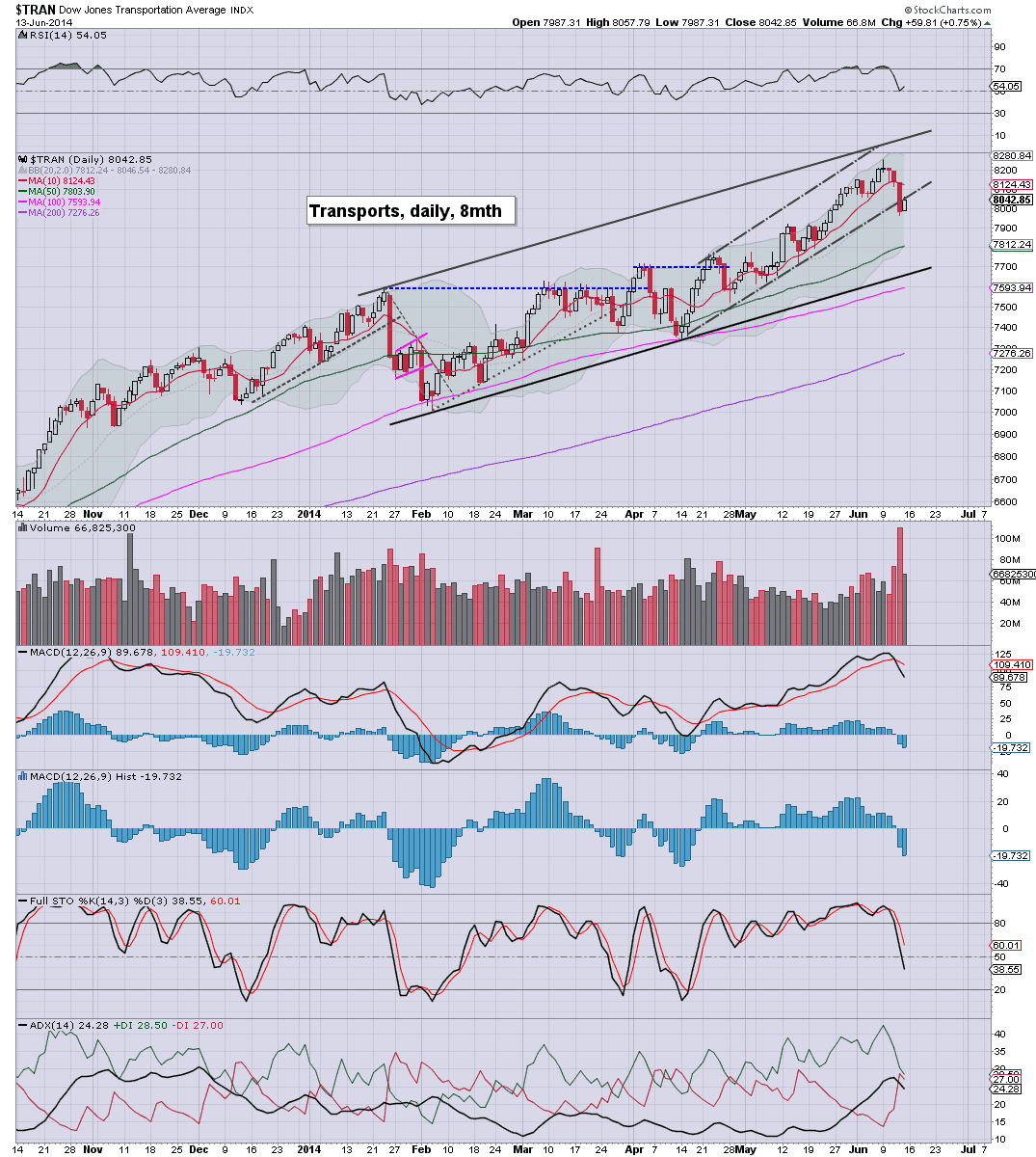 Suffice to say..yes, the Trans got whacked yesterday, but still.. the broader trend remains UP.

The market, taken as a whole, remains pretty strong, and I'd have to guess we'll see new highs in some of the indexes next week. Certainly, the sp'1960s seem likely - and both the daily/weekly charts will allow for that level of gain.
--