The US indexes continued a strong and consistent push upward. Most indexes climbed around 4% in March, and there is simply no sign of the current trend ending. However, based on the seasonal action in the past three years, we are due a multi week down cycle of at least 7%

With the first quarter now concluded, lets take our regular look at six of the main indexes 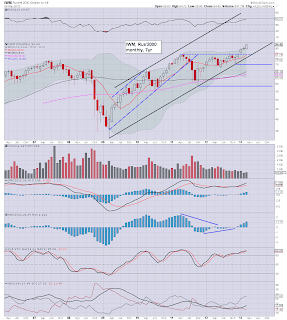 The R2K remains the second market leader, and closed the month 4.7% higher, at yet another all time high. There is absolutely NO sign of a turn/levelling phase.

Underlying MACD (blue bar histogram) cycle is still ticking higher, and there is arguably a little airspace to the upside to reach the momentum peaks seen in both spring 2010 and 2011.

The only issue in my view is whether IWM hits 100 this year, which right now is a mere 6% away. 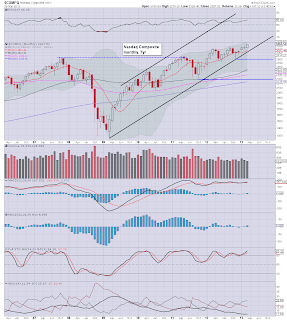 The tech sector is lagging, but still managed a monthly gain of 3.4%. There is nothing bearish here either. There is no sign of any turn, and the April upper bollinger band will be offering the 3400s - although the daily and weekly charts do look exhausted on the upside. 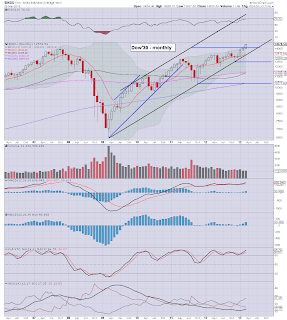 The mighty Dow closed March at a new all time high, climbing 524pts, and now comfortably trades in the mid 14500s. There is no sign of any turn. The Dow is resting just a touch over the upper bollinger, and is clearly over-stretched.

First downside target for the bears should be 13700, which is a good 800pts lower - that seems very viable across April/May.

What is clear, the doomer bears need to see a Dow back under the November low of 12500 to have any hope that a grand cyclical top has been put in. 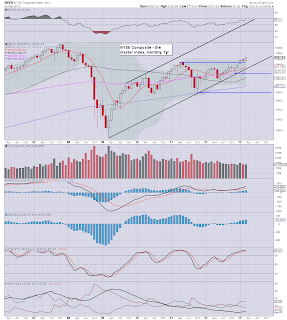 The master index closed the month 2.7% higher, and made the third consecutive close above the spring 2011 highs - a time when most commodities also peaked.

There is no sign of any turn, and what is notable is that this exceptionally broad index is still some 1200pts shy of its Oct'2007 high - that's a significant 14% or so. 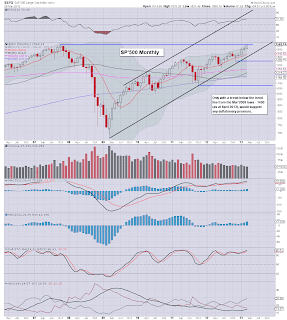 The all important Sp'500 continues to battle higher, and put in its highest ever monthly close, although is still 7pts shy of breaking the intra day high of 1576.

The upper bollinger will probably jump to the 1580s at the start of April, so there is probably no more than another 1-2 percent higher viable. The 1600s do not seem likely this side of the summer.

Underlying MACD just keeps on ticking higher though, and even if we do have a rollover in April and May, price momentum is still going to be net positive.

Doomer bears need to see a break of the November low of 1343 to have any hope that a grand cyclical top has been put in, and right now, the weekly charts say that is simply NOT viable in the next down cycle. 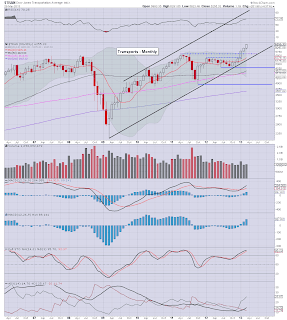 The old leader closed the month up 4.4%, and from a permabear's perspective, the price action is simply scary-bullish.

This was the sixth consecutive monthly climb, a run not seen since summer 2009. Trans is trading 2-3% above the upper bollinger band, so it IS over-stretched, but price action itself is showing no sign of a turn.

Transports could slip all the way back to the old resistance high in the 5600s - some 10% lower, and still not do any damage to what remains a disturbingly powerful upward move.

Clearly, another month where the deluded bull maniacs can claim victory. Anyone who has been vainly trying to short this market has been ground down to dust...or worse.

I have to think the current up cycle from the November lows is about to conclude. The daily and weekly charts are both VERY exhausted, so we'll probably see at least a little downside this spring..but I'm really not expecting too much.

Best hope for the bears right now is a retracement to the highs of last September - the sp'1470s, which I'm guessing will take around 4-6 weeks.

Next week will primarily be focused on the employment data. We also have ISM data on Monday and Wednesday, and factory orders on Tuesday. So, there will be at least something for the market to reflect upon each trading day this coming week.

In terms of near term 'viable' downside, consider the following... 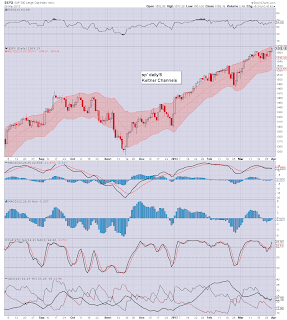 Lower Keltner band will start April around sp'1530. I can't see any hope of trading under the 1530s in the first wave lower - in the first two weeks of April. Indeed, I refer anyone to the style in which the market traded from mid-Sept to mid-Nov. That is probably the 'best case' style of decline the bears can hope for across April/May.

I realise that sort of choppy moderate decline is not exactly the stuff of bear dreams, but in my view, that is probably the best we can hope for.

---
As ever, all comments are most welcome. I might post something late Sunday, but regardless, I will be back on Monday

Have a good weekend
Posted by Trading Sunset at 17:08:00
Email ThisBlogThis!Share to TwitterShare to FacebookShare to Pinterest

The SP'500 closes around levels not seen since October 2007, mainstream media enthusiasm is reaching new heights. Yet, the charts are warning of mid-term downside. If Q1 earnings come in somewhat 'rough', Mr Market has a significant way to re-price, at least to the sp'1470s 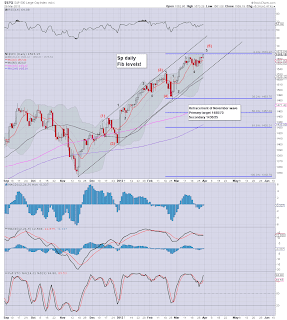 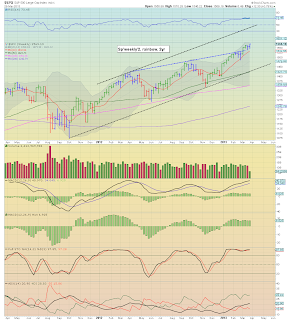 I'm still open to a little further upside across Mon-Wednesday, so those fib levels will probably need to be adjusted. Regardless, I'm pretty content with the overall cycle count, and I think we're in the very last micro-cycle of a fifth wave.

Primary target is the sp'1470s, which happens to be the old resistance highs from last September.

Its kinda curious that we only closed up 12pts on the week, but it sure feels a lot more. Whether we hit..and exceed the Oct'2007 high of 1576, I don't think is of any real consequence.

Underlying MACD (green bar histogram) on the weekly charts IS rolling over, and warning of a new multi-week down cycle beginning within the next week or two.

For the bears...next week will probably be prime time to start picking up index shorts/VIX long,  for looming downside/increased volatility.

next main post, late Friday, probably on the US monthly charts
Posted by Trading Sunset at 03:00:00
Email ThisBlogThis!Share to TwitterShare to FacebookShare to Pinterest

The US market closed moderately higher to end the first quarter, with the sp' briefly breaking into the 1570s, a level not seen since Oct'2007. Transports were the strongest sector, climbing 1%, with the Rus'2000 small cap closing flat. Near term trend remains up. 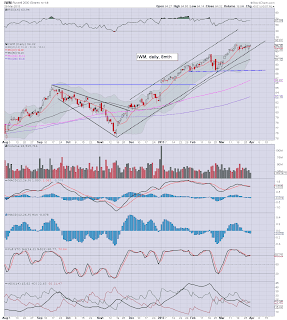 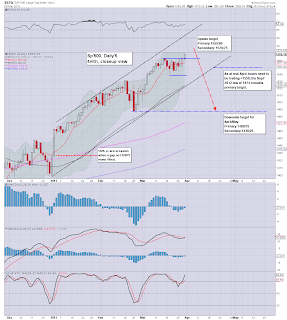 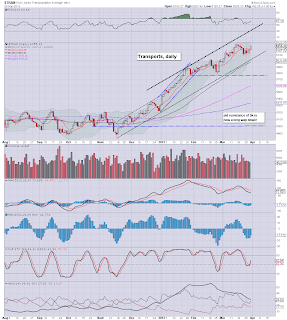 The micro-count on the hourly indexes remains a bit of a confusing and uncertain mess.

Yet, the daily charts are pretty clear. Trend remains up!

Underlying MACD (blue bar histogram) is ticking upward, and the sp' is due to go positive cycle at the Monday open on April 1'st. There is no reason to believe we won't see at least 1 or 2 daily closes in the 1570s.

The only issue is how many up days do we get, in what I believe is the last up small up cycle of this very large November wave. Best guess..we are maxed out by Wednesday, with VIX possibly back in the 11s.

For the bears out there, its almost time.