This past week, the bears needed to see a clear turn on the weekly index cycles. Even though Friday closed somewhat higher, the closing candle for this week was still more than enough to confirm the completion of wave'2.

The following six index charts should put beyond any doubt, what is coming in the weeks ahead. In particular, check the NYSE composite, it is without question the most perfect fail candle I've seen on any index chart. 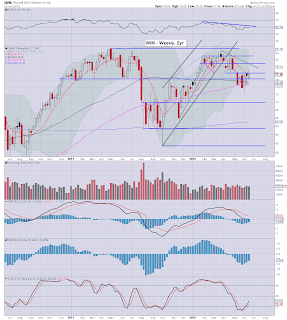 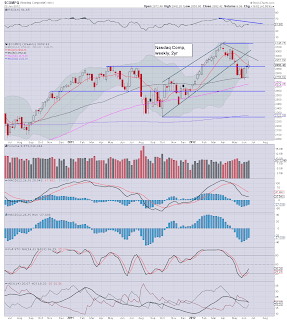 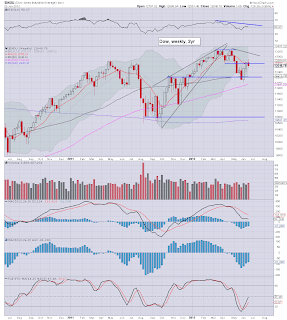 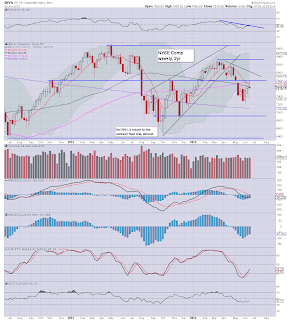 The NYSE composite, aka ' the master index' as I like to call it. It is a better representation of the overall capital markets than anything out there. We have a PERFECT fail at the old support (now resistance) level of 7800. Absolute chart perfection! 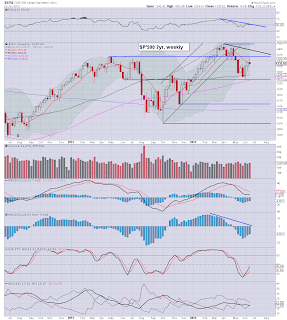 The Sp' put in a superb bearish candle this week, a nice spiky tail/shadow on the top, and the close under the 10MA is a most welcome thing to see. 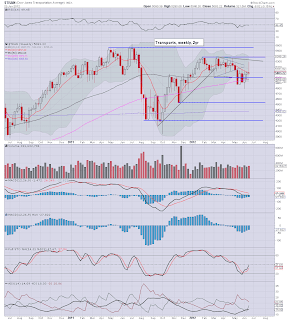 The transports was the strongest index earlier this week..but like everything else...closed weak. The near hyper-ramp Mon-Wed, failed dramatically - with a further 0.5% fall on Friday.

The tranny is set to break the big 5000 level this coming week..and that should eventually lead to a summer 2012 target of at least 4500/4400 or so. The monthly 'doom' chart suggest 3500 is viable.later this year..which would be a provisional warning of dow <10k.

A very important week, and one that can be claimed as an important victory for the bears.

All cycles are NOW bearish. I remain confident the bigger sp'1150/00 target will be hit by late July/August. For me, the only issue is how well can I trade in/out of these smaller cycles -trying to capture as many downside points as possible, its not going to be easy, but I'll sure give it a try.

I am expecting significant downside across Mon/Tuesday. We should have a fair chance at hitting 1305 at least, possibly 1290s. I'd exit there, and look for another re-short 10/15pts higher.

There is a small hint in some of the charts - especially with Oil/metals, that sp' could snap dramatically lower to 1225 by this coming Friday. That would make for a superb place to close out short positions, ahead of the July'4 holiday week.

More on that theory, this Sunday night.
Posted by Trading Sunset at 19:11:00
Email ThisBlogThis!Share to TwitterShare to FacebookShare to Pinterest

A very bearish week for WTIC oil. The general weakness seen in Oil since April is continuing, and looks set for a further 2-3 months of downside - to levels not seen since spring 2009, when the SP' was in the lowly 800s. 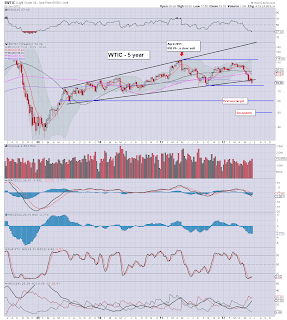 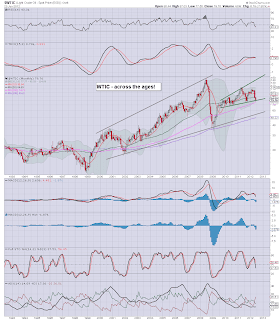 To be succinct, the break of $80 this week was a major warning signal to the broader market. The next key level is $60.

From my bearish viewpoint, the only issue is whether WTIC will level out at 60, 55. or $50 before the next major dose of QE by the Bernanke.
Posted by Trading Sunset at 04:00:00
Email ThisBlogThis!Share to TwitterShare to FacebookShare to Pinterest

The indexes closed higher today, but considering the big falls on Thursday, today's increase was weak. The bulls should be very concerned, not least if they look at the hourly charts, where there are clear bear flags all set to snap lower on Monday. 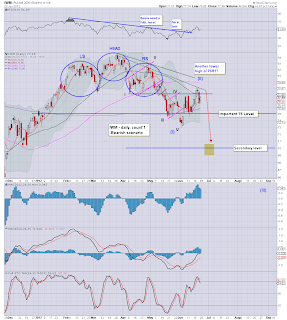 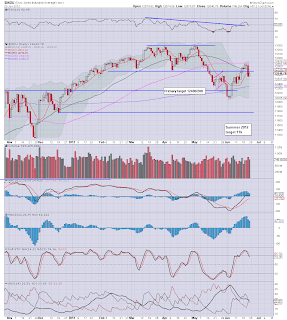 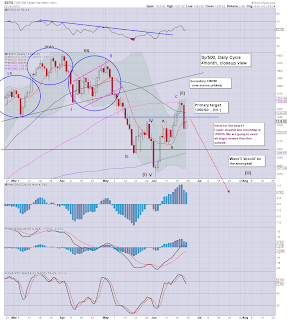 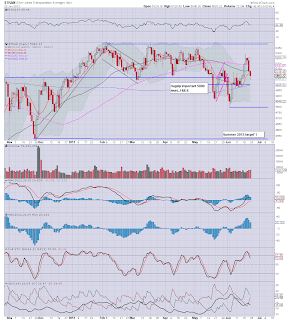 Wednesday - FOMC day no less, has made for a superb peak for wave'2. After Thursdays big drop, I remain very confident the peak of this cycle was indeed sp'1363, and we are now in the early days of what should be a very significant drop into the sp'1150/00 zone - as suggested by the monthly cycle charts.

One interesting aspect of today was the weakness in the Transports. Transports had a particularly weak day, and showed some good follow through after Thursdays drop. The tranny remains a VERY bearish index, and a key warning flag for the wider market.

From a MACD (blue bar histogram) cycle perspective, today was day'3 of this new down cycle. We could easily fall a further 5-7 trading days on the cycle before becoming oversold.

I'd guess we have a VERY good chance of breaking 1300 early next week, a fair chance of breaking 1266..and if so...then 1225 - a key monthly trend level, by next Friday. That is a very bold outlook I realise, and clearly, would be invalidated if we break 1363 at any time.

We shall see.
Posted by Trading Sunset at 00:00:00
Email ThisBlogThis!Share to TwitterShare to FacebookShare to Pinterest
Newer Posts Older Posts Home
Subscribe to: Posts (Atom)