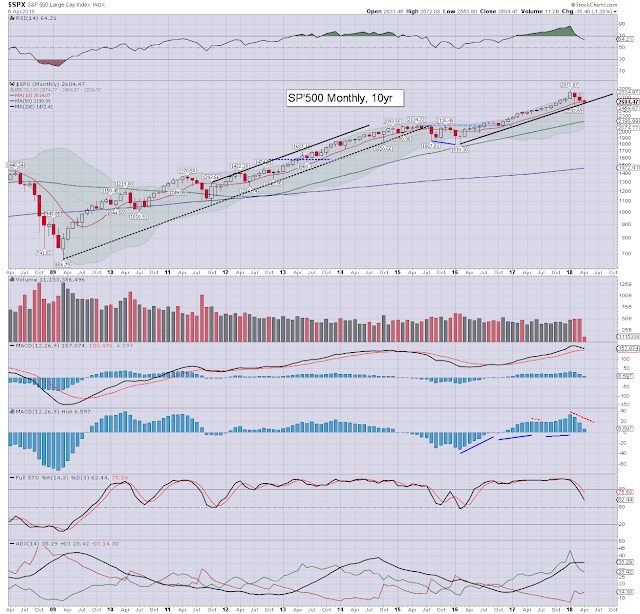 The sp' saw a net weekly decline of -36pts (1.4%) to 2604. More broadly, the sp' is lower for a third consecutive month, currently 10pts under the key 10MA. Underlying MACD (blue bar histogram) on the giant monthly chart is ticking lower for a third month, and will be due a bearish cross in May, unless the market can settle April well above current levels.
-- 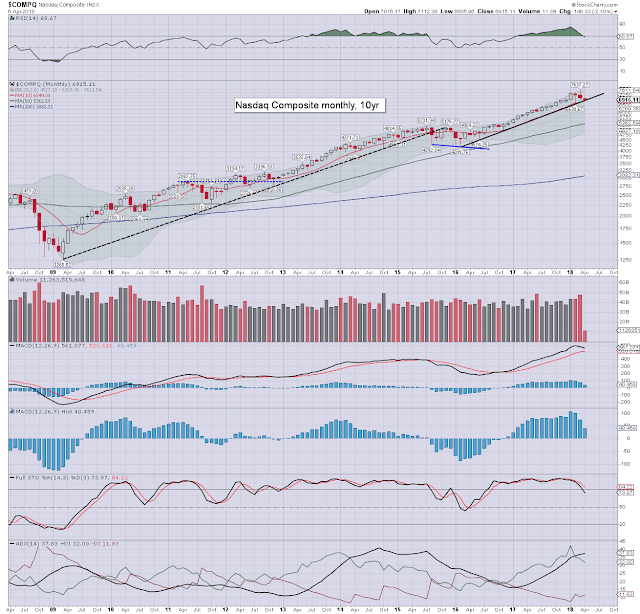 The Nasdaq settled lower for the third week of four, -2.1% at 6915. The tech' is currently lower for a third consecutive month, but still above the key 10MA. A bearish macd cross will be a threat at the May 1st open, unless April settles higher than current levels. 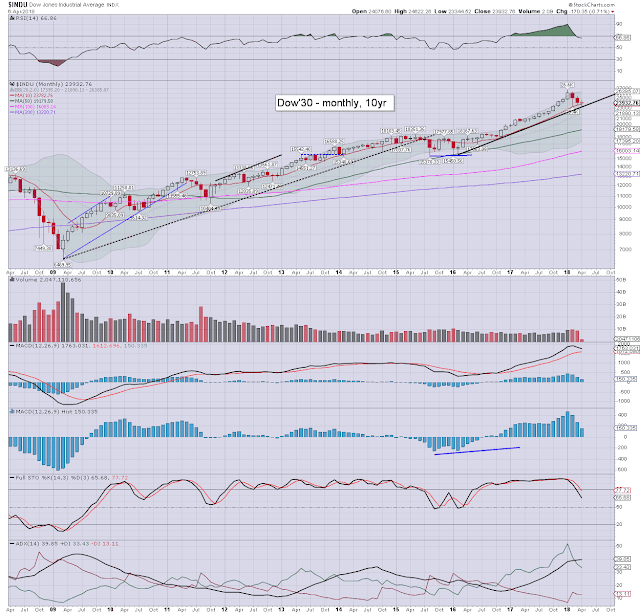 The Dow was the most resilient index this week, settling -0.7% at 23932. The Dow is the only index that has broken the Feb' low (if fractionally and briefly). Like most other indexes, the Dow is currently lower for a third month. A bearish macd cross will be due in May/June. Note the 20MA in the 21800s. 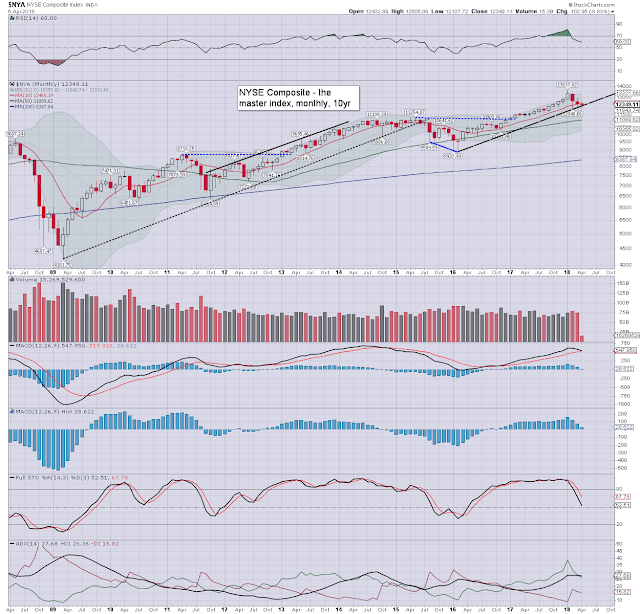 The master index settled the week -0.8% at 12349, and like other indexes, is currently lower for a third month. 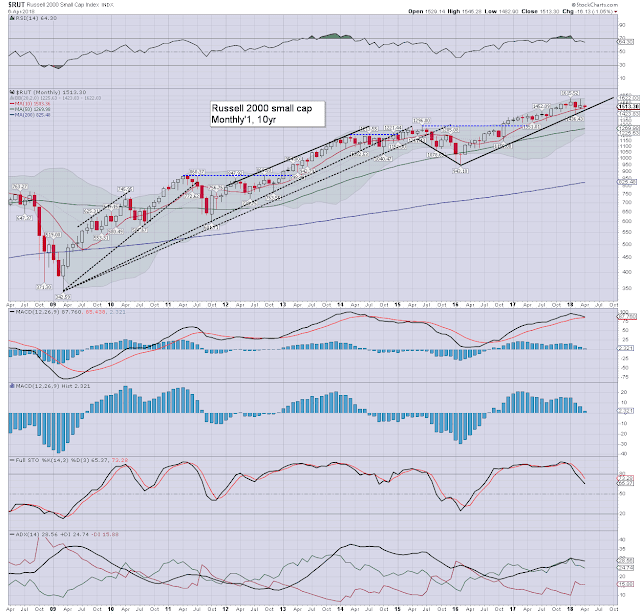 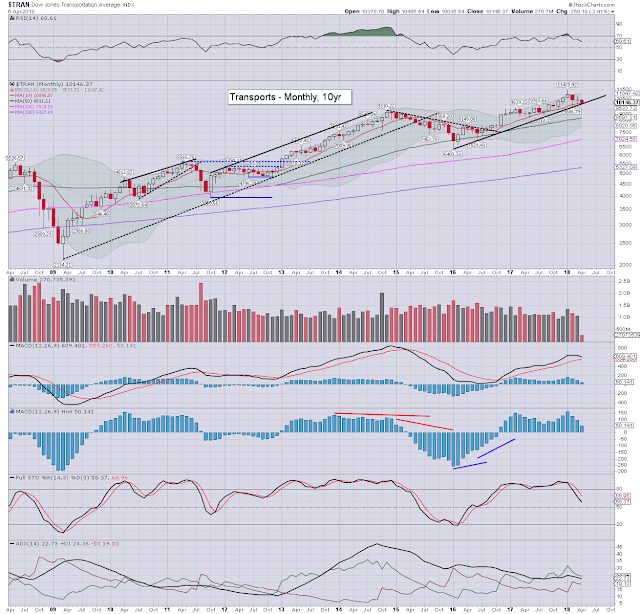 All six of the US indexes saw net weekly declines, lead lower by the Transports (2.4%), whilst the Dow (0.7%) held up relatively well.

The Dow is so far the only index to break below the Feb' low.

Further weakness of around 5% does seem very probable, and is most likely next week, ahead of the first batch of key earnings.

For now, I still see the Jan' high as some kind of intermediate top. Considering the econ-data and earnings, a renewed push to the sp'2950/3047 zone still seems probable in the months ahead.
--

The first big earnings for Q1 are set to appear, with the financials of C, JPM, and WFC. 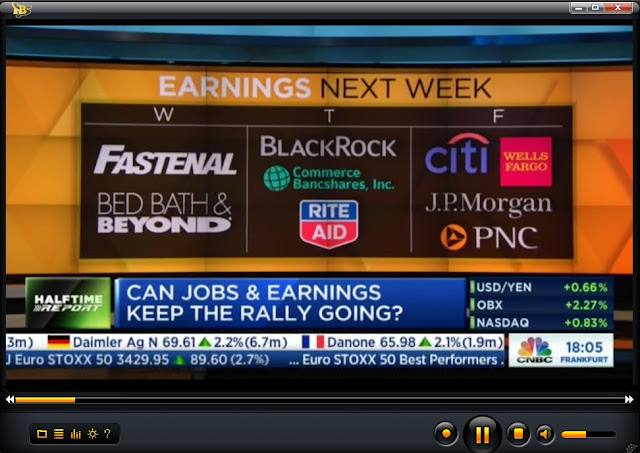 *there are a handful of fed officials on the loose, notably Rosengren and Bullard on Friday. However, I believe the market will be far more focused on further tariff news, presidential tweets, and earnings.
--