Retailer Sears has seen a massive recovery – at least in its stock price, since the January 9th turn. From around $29 to $75 in just 9 weeks, that is certainly one hell of a move.

Yet, is it really any better now than two months ago? I'd suggest the answer is probably not, unless you believe retail sales are going to rise across this year, along with the company seriously improving its cost base structure.

Bearish case
A break below $60, and I'd be very concerned SHLD will make a challenge to test the low 40s.
Clearly, the ultimate warning line right now is the January low of $29. 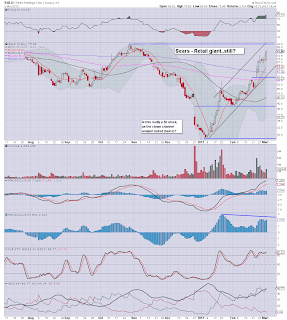 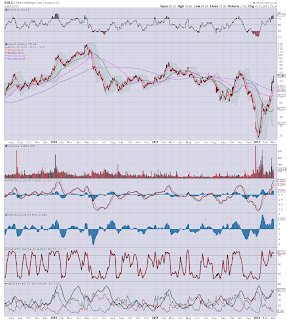 Sears is not doing well, its margins (much like AMZN) are too narrow. Analysts are expecting further losses, and even a full year loss next year too! So we have a $75 stock, and some say its not only going to hold this level, but keep rising. All whilst it will likely put in losses for another 4-6 quarters minimum? Err, no, that is not good.

*Tis Sunday evening, the futures wheel opens up in 4.5hrs. I'm not going to expect anything much overnight, but bears will want to see some decline across the Monday-Tue period. I believe AAPL is due to release IPAD'3 this Wednesday, so that sort of media hysteria could help prop things up from late Wed for a day or two.
Posted by Trading Sunset at 18:28:00
Email ThisBlogThis!Share to TwitterShare to FacebookShare to Pinterest

So...its March, and in the last decade March has been historically pretty bearish – at least for the first half.

Near term – a retracement is under-way at minimum

Lets take a look at both IWM and SP' fib levels, which should offer something – in addition to the part'1 and 2 charts. 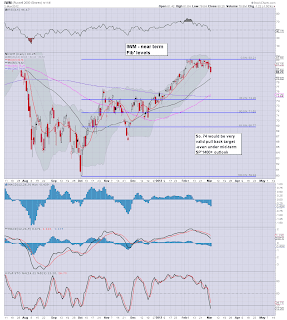 Considering the massive ramp since last October, a move back to the 76/74 level looks very reasonable. That of course may be as far as we go. 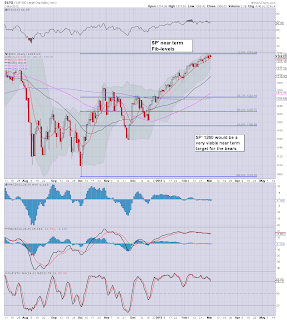 This chart shows the true horror of the latest period of low vol' melt up. Relentless baby moves, with just the occasional single red day. A move lower to 1260/40 seems 'reasonable' to hope for, although right now, a 100pt fall seems a very long way down.


The new favourite chart of mine recently again merits highlighting. The SPY/VIX is at a critical level, either we see a major move lower this coming week, or we're going to likely break much higher. 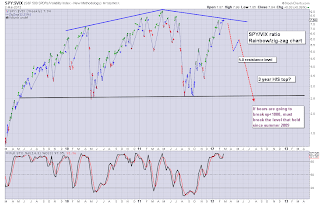 Mr $ will of course be important 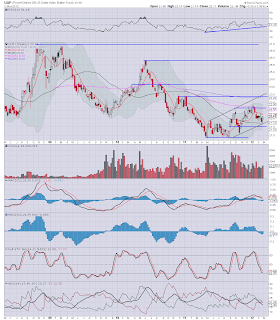 The dollar remains in a mild uptrend. We could indeed be due an imminent surge higher - with a target of around 22.75/23 on UUP. That would of course put even more pressure on the recently massacred Gold and Silver. 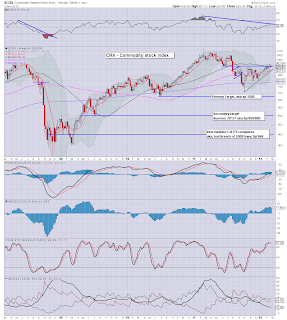 The CRX index I do like to follow quite a lot. Contrary to the current hysteria out there, this index is very weak, and is very supportive of the notion that last summer was indeed the high of the overall cycle. We recently have a tiny break above the wedge - and the old resistance/support level. However, we are still considerably below last summers high.

What matters for the bears, they need to see a clear break below 900, and some significant progress towards the 700s by late April/May. In comparison, bulls will want to see a break above 1100..and then some!

Weakness is due, but it might not be much

It is highly probable we will see significant weakness for the next few weeks. However, Bears will need to see more than just a 5% move lower. Arguably, only at least a punch lower down to SP'1240 would suggest there is anything significant to come. Even if 1240 is hit, bears would then still have to contain any subsequent bounce to form successively lower highs. This is something that the bears have not done since last summers decline ended in October.

The most bullish aspects presently remain the possibility that the Greek Govt. will actually pay the major interest payment due late March. The Bond market however says 'NO!, default is assured mid term', The second major issue is that of the Bernanke doing a new tranche of QE, most probably in the form of a 1 trillion purchase of MBS.

As traders, it remains entirely possible that the can-kicking will continue for some months, maybe even into 2013. It would remain highly ironic if the doomster year of 2012 saw many equity markets attain new highs.

Bears need to be careful, this March could all just be a big tease, before another very significant wave higher. I am inherently biased, but will note that unless I see IWM hit 72 this March – or early April, then I'd assume we are going much higher across the summer.

Next week should be more volatile (how could it be less so though?)..so, it should be kinda interesting to watch and be part of.