Volatility on the slide 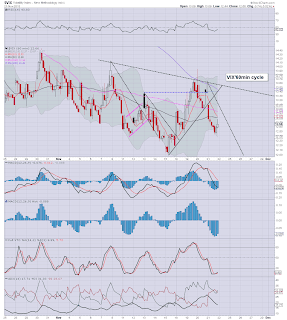 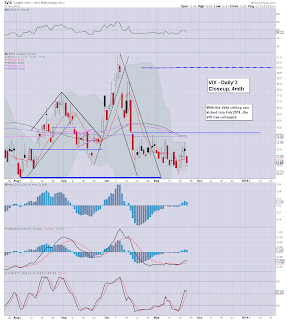 Another day for the equity bulls, and again, we have a VIX that quickly slips back to very low levels.

There really isn't much else to add.

The only issue is whether the VIX will put in a weekly close in the 11s, not that it matters much.
-- 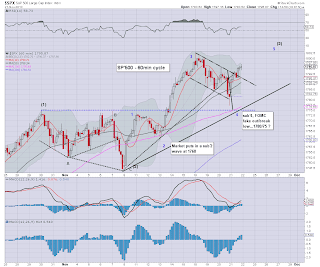 The VIX was indeed the big tell yesterday. Equity bears have no excuses to be surprised about today.


*I am on the sidelines, patiently..but carefully looking to pick up another SLV-short.
-

The indexes are battling hard to hold onto the sp'1790s. Bears look weak, and there seems no reason to believe sig' downside is viable until early December. Metals are weak...but still trying to vainly bounce into early Friday. 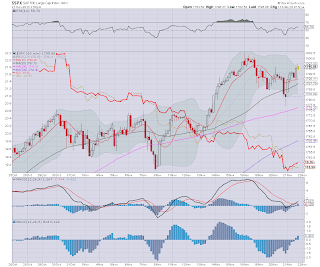 At least the market is still behaving itself...and we do seem to be in a little fifth wave higher.

The market is comfortably holding the sp'1790s...and things look pretty secure for the equity bulls. Upside into the 1800s..remains on track. Meanwhile..metals continue to attempt a minor bounce..before the downside resumes. Oil is holding gains, +1.7% 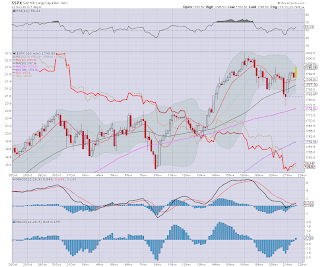 *I thought I'd share a chart I am just watching across today...

sp'60min..no labels...but with the Gold and Silver (via GLD, SLV) overlaid.

You can see that whilst the market often tries to rally, the metals are affected..to some extent..but there is massive underlying downside pressure.
-

*I remain patiently looking for my next SLV entry..am in no  hurry..will likely wait until early Friday.
-

stay tuned!
Posted by Trading Sunset at 18:50:00
Email ThisBlogThis!Share to TwitterShare to FacebookShare to Pinterest

Mr Market is battling pretty hard to hold the moderate gains. The sp'1800s look unlikely today, but they sure look viable tomorrow/early next week. Metals are seeing a slight bounce..with possible follow through early Friday. 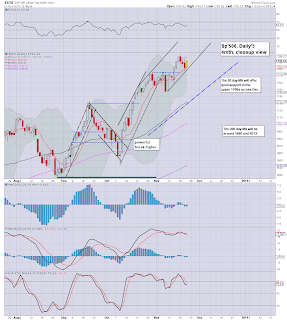 The price action on the daily chart looks like a very clear small bull flag..a sub'4..and now we're in a sub'5..that will probably last across most of next week - when the market is shut for 1.5 days.
--

*the bounce in the metals is pleasing to see. I'd like a little further upside early tomorrow, before picking up that SLV short again
-

RIG remains weak..downside target is 50/49..before much higher levels into the spring. 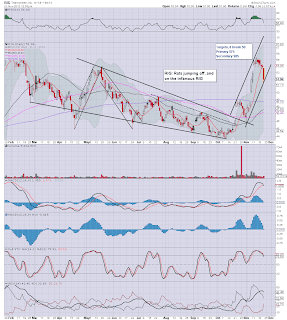 stay tuned!
Posted by Trading Sunset at 17:54:00
Email ThisBlogThis!Share to TwitterShare to FacebookShare to Pinterest

Equities are holding onto moderate gains, and we look set for some hours of algo-bot churn for the rest of today. The bears look powerless for the rest of the month. Metals are trying vainly to bounce higher into Friday. USD is a touch lower...whilst Oil is +1.6% 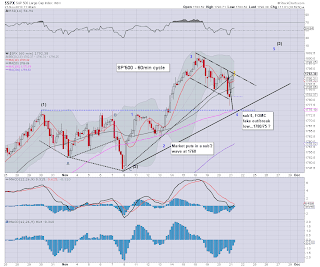 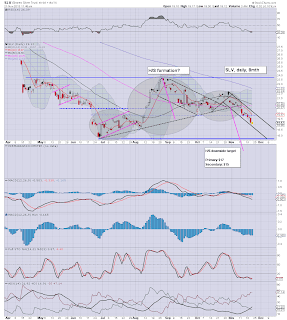 ...things remain on track. Holding to all recent postings and relative targets.

Effectively..bears don't have much hope until December, and even then, we're only looking at maybe a 3-4% minor decline.

*I continue to think the metals are prone to much lower levels in the immediate term..along with a possible 'Sunday night surprise' giant gap lower'. I am looking to pick up an SLV-short block again..before the Friday close.
-

time for tea :)
Posted by Trading Sunset at 16:50:00
Email ThisBlogThis!Share to TwitterShare to FacebookShare to Pinterest

Equity bears look particularly weak this morning. There is little between now and the start of December for the bears to look forward to. Upside target zone by early December is sp'1810/20. Metals are weak, Gold -$5, but Gold/Silver both look prone to a minor bounce into Friday. 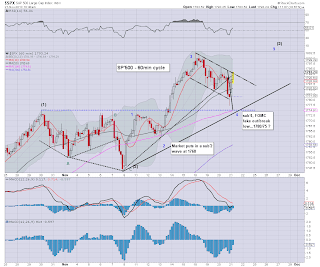 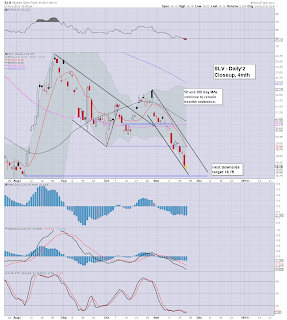 Not much to add...things broadly going as expected.

A close in the 1790s looks likely, and that opens up new highs for next week.

VIX told the real story yesterday, not least with a few spiky-top candles on the hourly chart.
-

Notable weakness, RIG, -3%, probably just retracing to the $50 threshold before next up wave.
Posted by Trading Sunset at 15:49:00
Email ThisBlogThis!Share to TwitterShare to FacebookShare to Pinterest

The main indexes open moderately higher, and with sig' Qe--pomo, what little selling there is, should be largely negated. Metals are weak, but a small 1-2 day bounce is viable before the bigger down trend resumes. 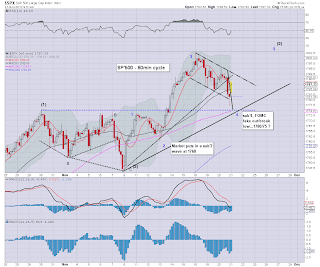 A somewhat interesting open, especially for a few individual stocks.

Equity bears really have no hope..baring a break <1775, and that is now a clear 12pts lower. 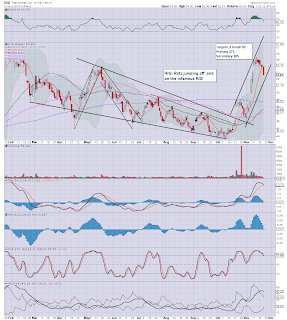 I'm a major fan of RIG. Having broken out after many months...it looks like this is just a retracement/gap fill, before the next surge into the 60/70s in the spring.
Posted by Trading Sunset at 14:51:00
Email ThisBlogThis!Share to TwitterShare to FacebookShare to Pinterest

Good morning. Futures are moderately higher, sp +5pts, we're set to open around 1786. Precious metals are a touch higher, gold +$2, with the USD -0.1%. With sig' Qe-pomo today, equity bulls have a fighting chance of a major rebound. 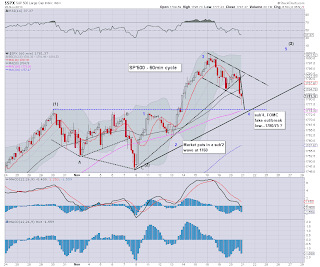 So..we're set to open a little high, and baring a break <1777, the bears should be very concerned about the 'same old problem'.

With talk of negative interest rates in the EU, and the likelihood of the Fed sitting back whilst the equity bubble grows into spring 2014....the bulls remain in control.
--

*I am on the sidelines, and seeking to pick up an SLV-short block again.

I remain very content to leave the indexes well alone..even though I am closely tracking them.
-

Video update from Mr Permabull....who remains on his TSLA-short train...

I remain surprised to see his target of $60..but it would be my secondary target. First though, I think we'll see a bounce off the 200 day MA in the 110/100 zone.
Posted by Trading Sunset at 13:28:00
Email ThisBlogThis!Share to TwitterShare to FacebookShare to Pinterest

Despite the recent wave from sp'1802 to 1777, the primary trend remains outright bullish. A small sub'5 wave to the upside - 1810/20, appears likely for the remainder of this week, and probably into next week - which is a shortened holiday week no less. 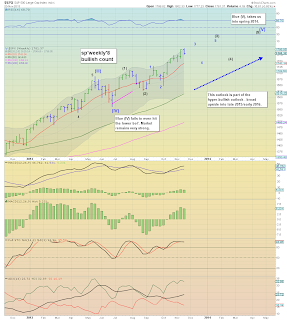 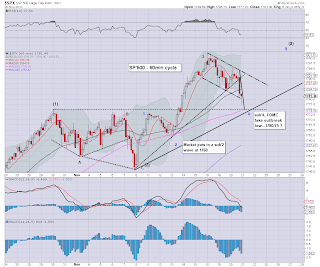 I realise any given wave count is subject to change..and personal interpretation, but the bigger weekly charts are pretty clear.

Broad upside into spring 2014..with minor retracements along the way.


A small wave lower in December

I might be getting lost in the minor wave counts again, but my best guess for the next few weeks is the following... 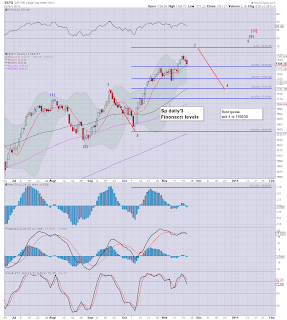 Let me be clear though, I won't be attempting to trade any index-shorts until the spring.
--

We have the usual jobs data, but really, there isn't anything too significant.

*I exited SLV-short today, and will look to pick up that position again (preferably in the 19.50/75 zone)..tomorrow or Friday. 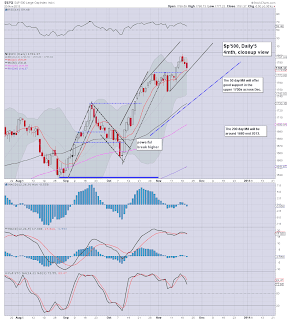 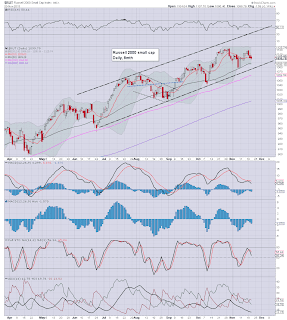 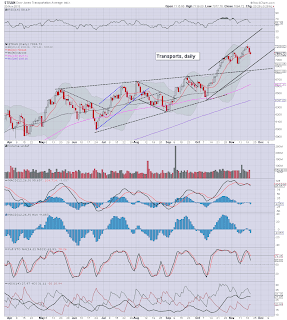 I realise some equity bears will be getting a little excited at today's red close, but really..the declines were minor, and we have a VIX which closed flat.

The hourly charts are now arguably oversold, and we look set for significant upside ..back in the sp'1800s by late Friday..or early next week.

With next week being a holiday week, I see next to zero hope that the equity bears will be able to manage a 1% decline until early December.
--