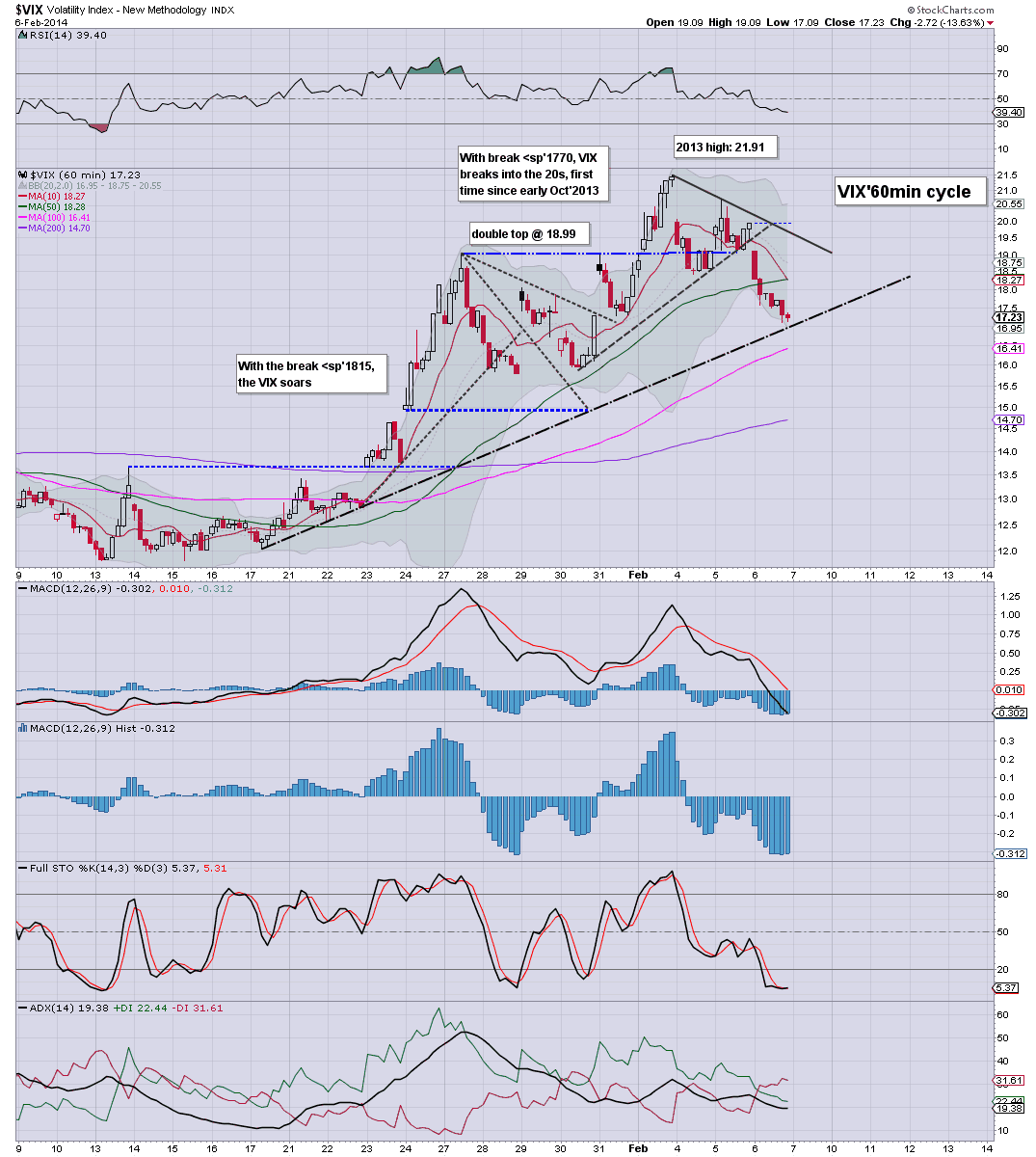 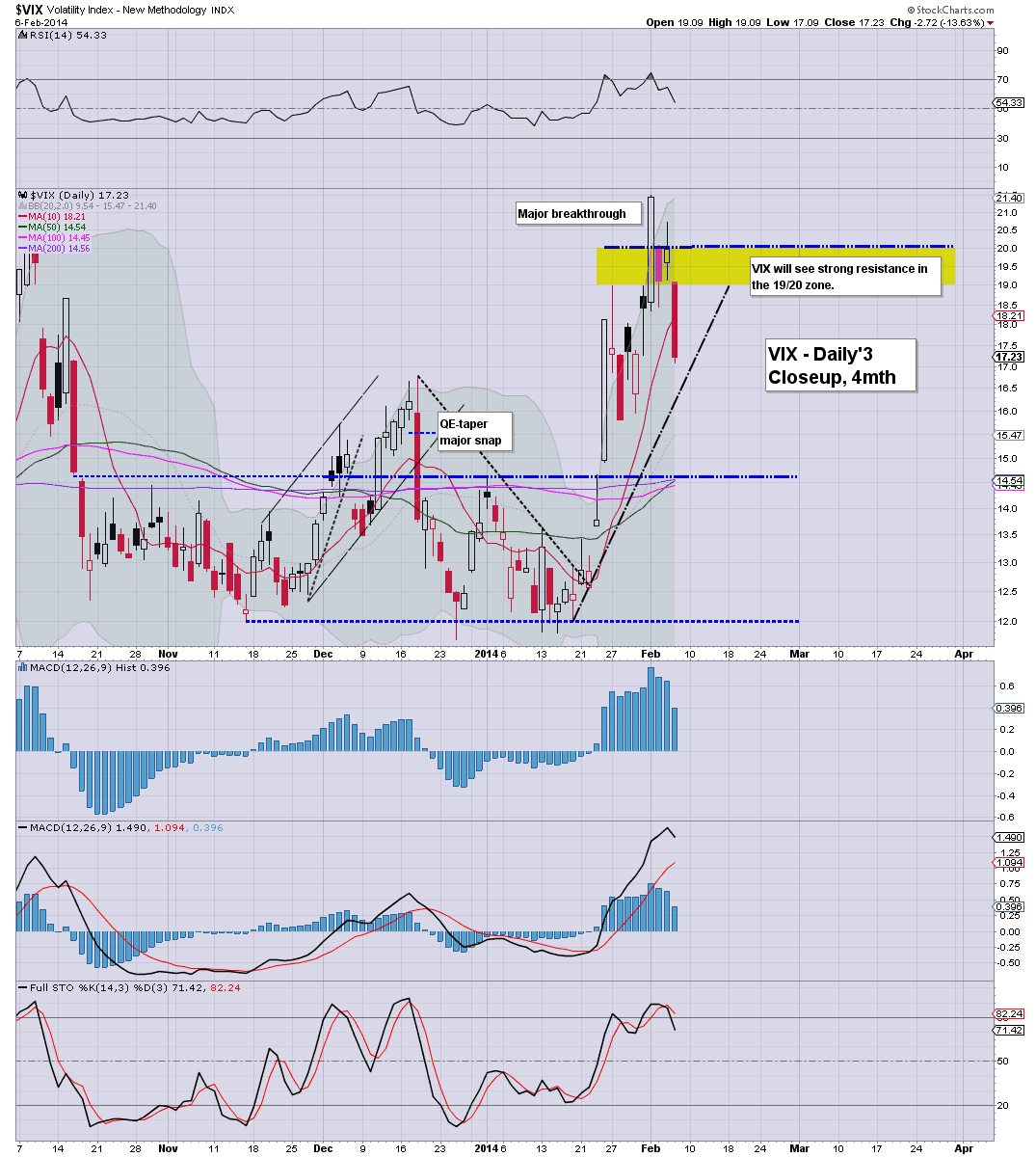 So..we've seen the VIX get knocked from the 21s to the low 17s across just three trading days.

In terms of the smaller hourly cycle, I'd be real surprised if we fall tomorrow, but hey..it is all dependent on how the market interprets the jobs data. Even if I knew the number, it is usually too difficult to judge how the market will interpret it.

Even though the VIX dropped hard again today, one thing that can be said..volatility has indeed come back to the market. The equity price action really is pretty dynamic lately. The days of relentless algo-bot slow motion melt now seem a long time ago.
-
more later..on those bouncing indexes
Posted by Trading Sunset at 23:00:00
Email ThisBlogThis!Share to TwitterShare to FacebookShare to Pinterest

Equity indexes closed with somewhat significant gains, sp +21pts @ 1773. The two leaders - Trans/R2K, settled higher by 1.5% and 0.9% respectively. Near term outlook is uncertain, and will be largely dependent on how the market interprets the monthly jobs data. 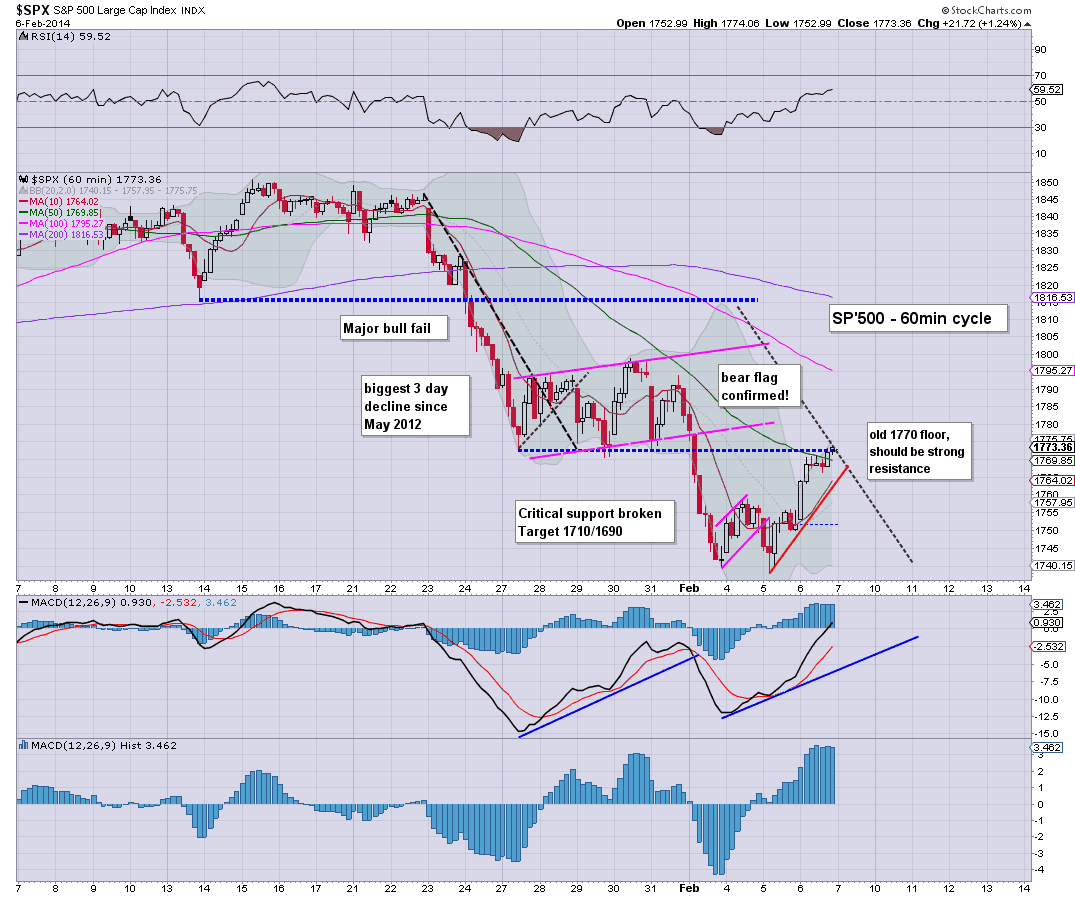 For many out there, I realise today was a truly annoying day, probably the most concerning since the market broke below sp'1815.

However, keeping the bigger daily/weekly cycles in mind, the market remains broadly weak, and is a long way below the 50 day MA @ 1809. This is no longer a market the bulls can tout as super strong. Key trends have been broken, the 'technical damage' has been done, as some chartists might say.

Tomorrow will indeed be critical. I will endeavour to appear in pre-market for the entertainment.
-

For those holding overnight on the short side, we need a full reversal, with a Friday/weekly close <1750, which will clarify that today was just a 'stupid bounce'. A weekly VIX close >19.50/20.00 would also be kinda important.
-

*the usual bits and pieces across the evening.
Posted by Trading Sunset at 21:01:00
Email ThisBlogThis!Share to TwitterShare to FacebookShare to Pinterest

Considering the intraday action, market looks set for minor weak chop into the close..ahead of the key monthly jobs data. There is clear resistance at sp'1770, and equity bears will need a major market scare tomorrow to punch below the recent 1737 low. Primary downside target remains 1710/1690. 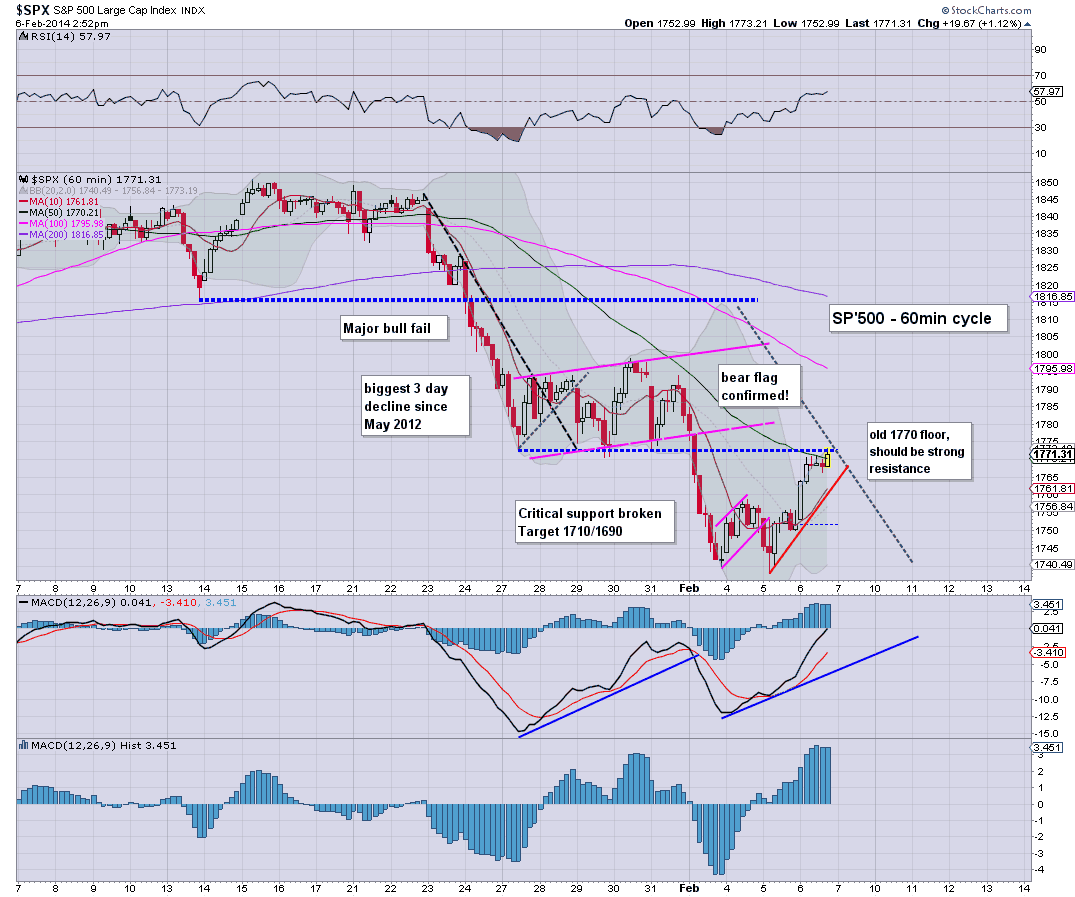 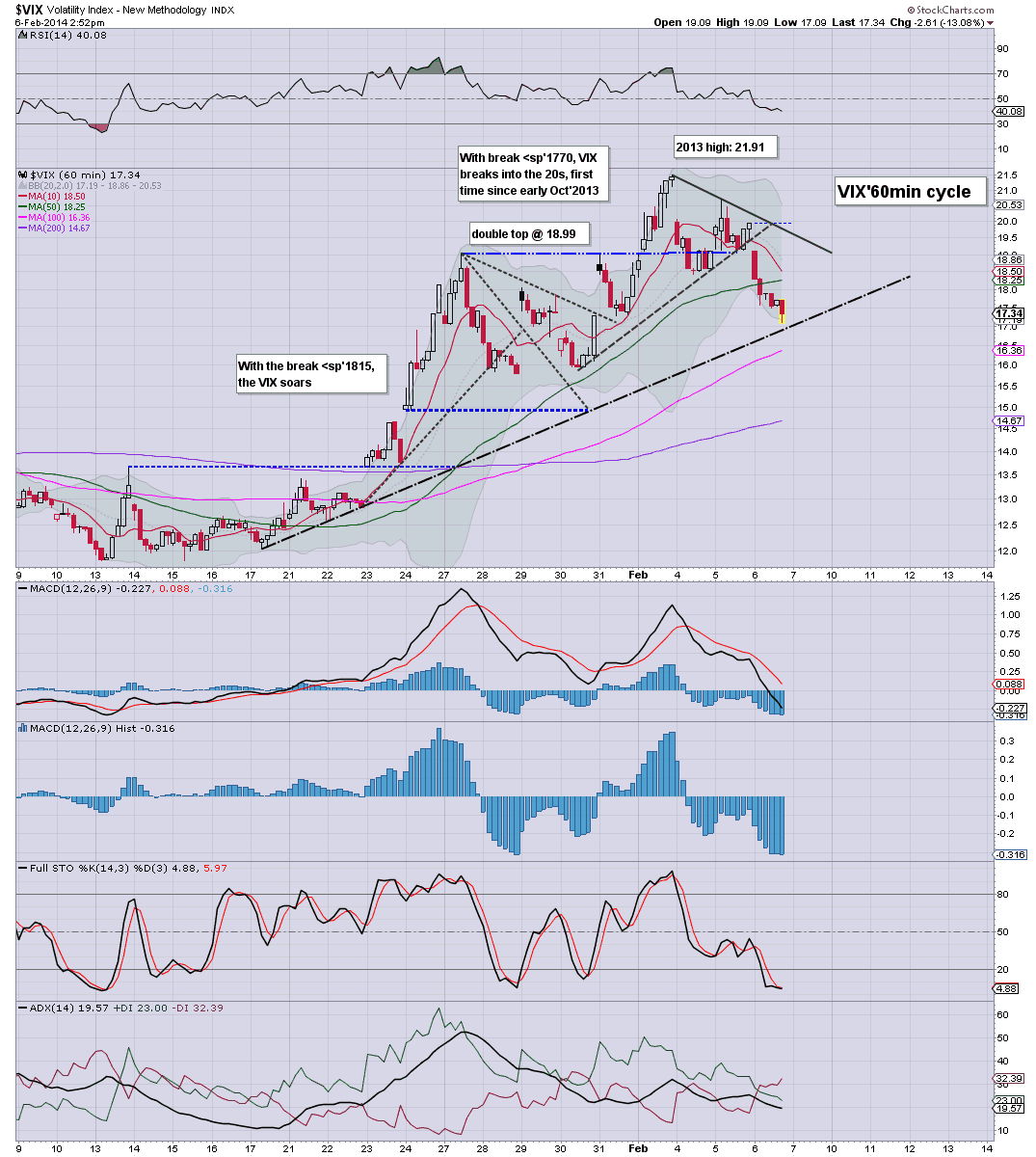 *I have my eyes particularly on the VIX, which often turns before the indexes, but clearly, there is no turn yet. VIX still trying to floor, having almost broken into the 16s, which I'm pretty bemused at.
--

At best, equity bears should look for a close in the 1765/60 zone, but <1760 looks just too far down, whilst most remain waiting for jobs data.

So..an hour to go..lets see how many of the rats want to bail ahead of the jobs data. Certainly, considering the recent econ-data, I'd be surprised at a jobs number >100k, never mind the 175k that is consensus..


3.33pm..no doubt many will be super bullish across many sites this evening.  I can only suggest they go stare at a weekly chart.

We have seen the VIX fall from 21 to the 17s in 3 days... and it makes for what is arguably another long-VIX entry level.

One thing is for sure..tomorrow won't likely open where we currently are trading.


3.43pm.. I'm watching IRBT, its not a stock I follow at the balance sheet level, but its seeing a second reversal today..this time..to the downside, but its still around 15% above the opening level of the $32s.

Main market looks like minor chop into the close..as expected.
Posted by Trading Sunset at 19:55:00
Email ThisBlogThis!Share to TwitterShare to FacebookShare to Pinterest

The market remains firmly stuck just under the old broken floor of sp'1770. There are very early signs of a rollover, but at the current rate, there will be no confirmation until at least early Friday, at which point we'll have the jobs data anyway. VIX is similarly trying to floor, in the mid 17s. 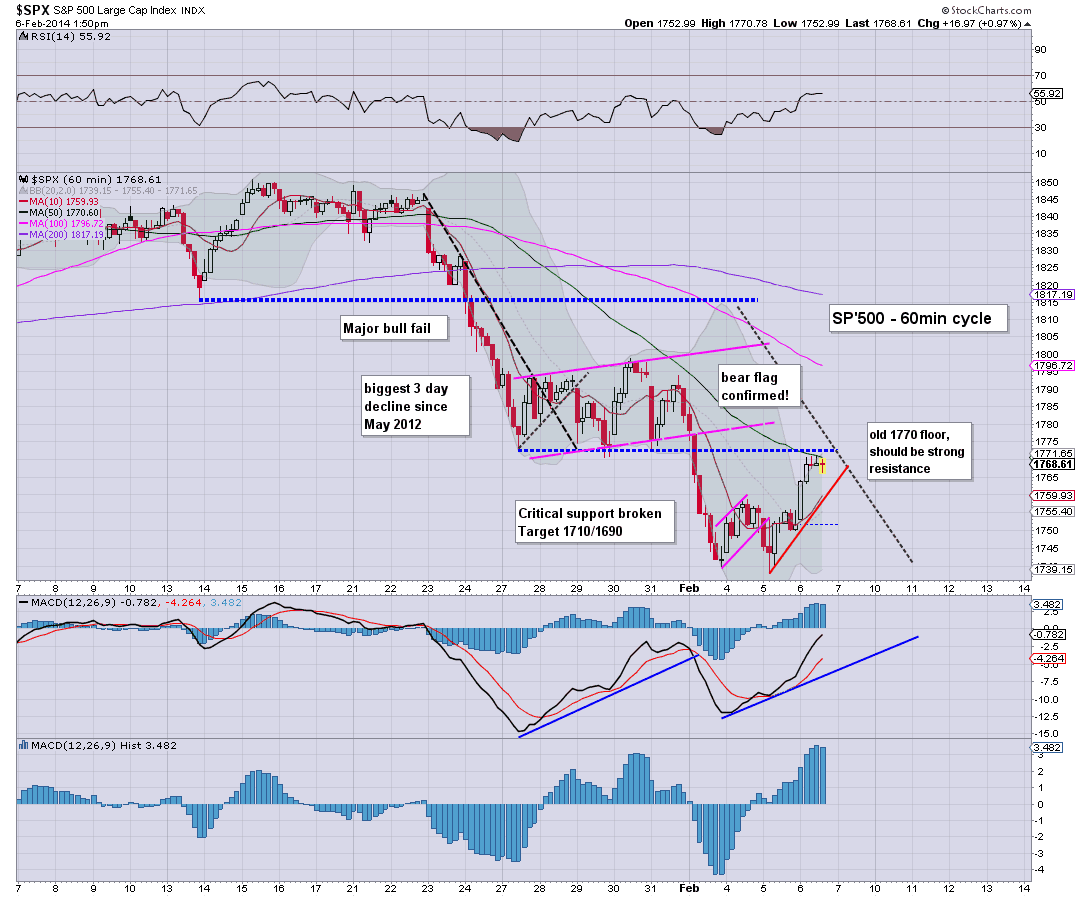 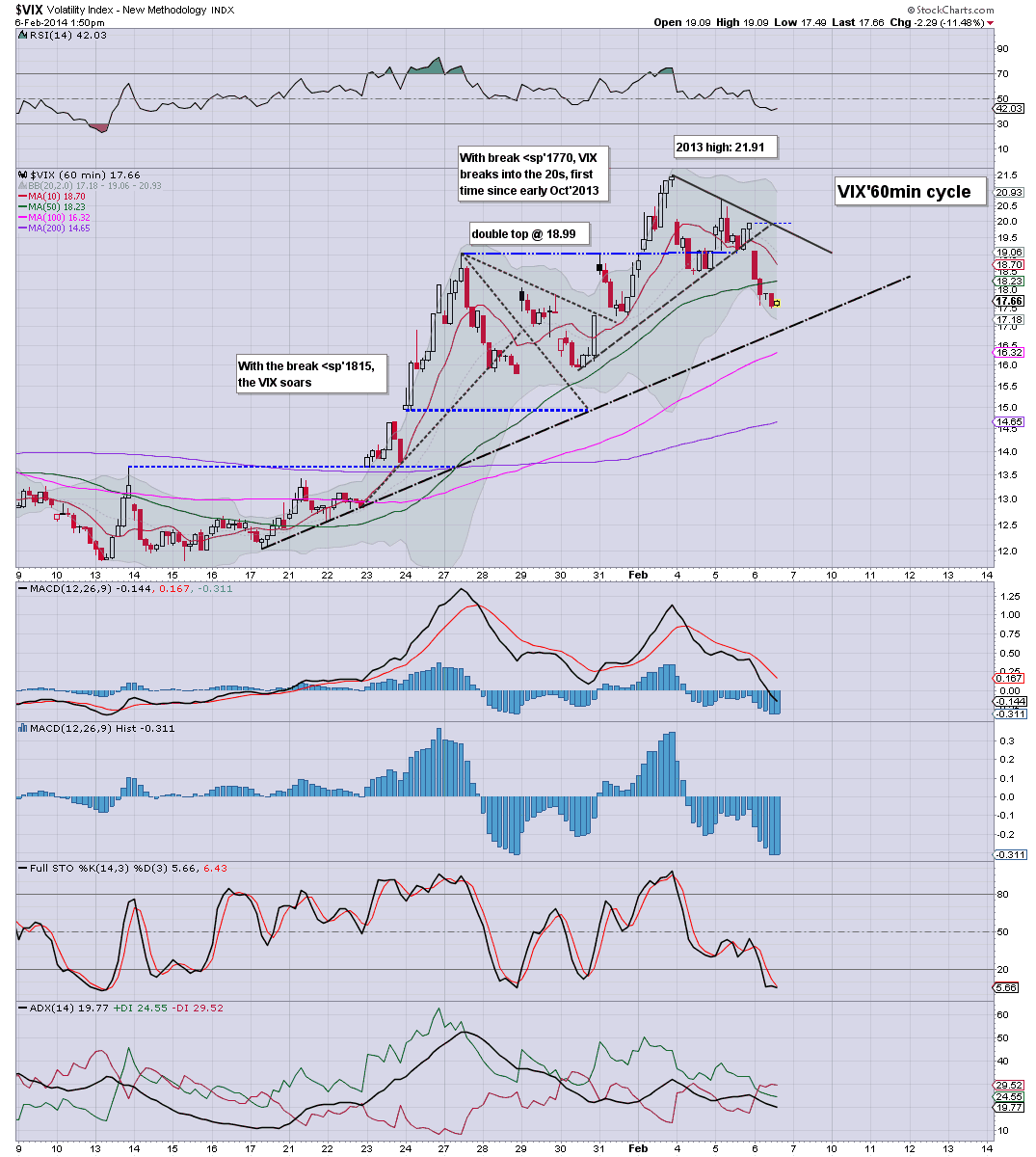 Rest of the day will likely be minor chop..with moderate risk of closing hour downside. A daily close <1760 looks unlikely. We'll probably settle in the 1765/60 zone..which will keep everyone hanging for the Friday open.

One way or another, this time tomorrow, we won't likely be anywhere near 1770.

Oh well, regardless of the close, what matters is the Friday open. Battle continues....

Notable strength: IRBT, +15%, an extremely strong reversal after opening a little lower.
Posted by Trading Sunset at 18:52:00
Email ThisBlogThis!Share to TwitterShare to FacebookShare to Pinterest

The market is holding gains of around 1%, but is clearly stuck at the old broken floor of sp'1770. VIX is not yet showing any sign of levelling out, -12% in the mid 17s. Metals are a touch weak, Gold -$1, whilst Oil is following the broader market, +0.8% 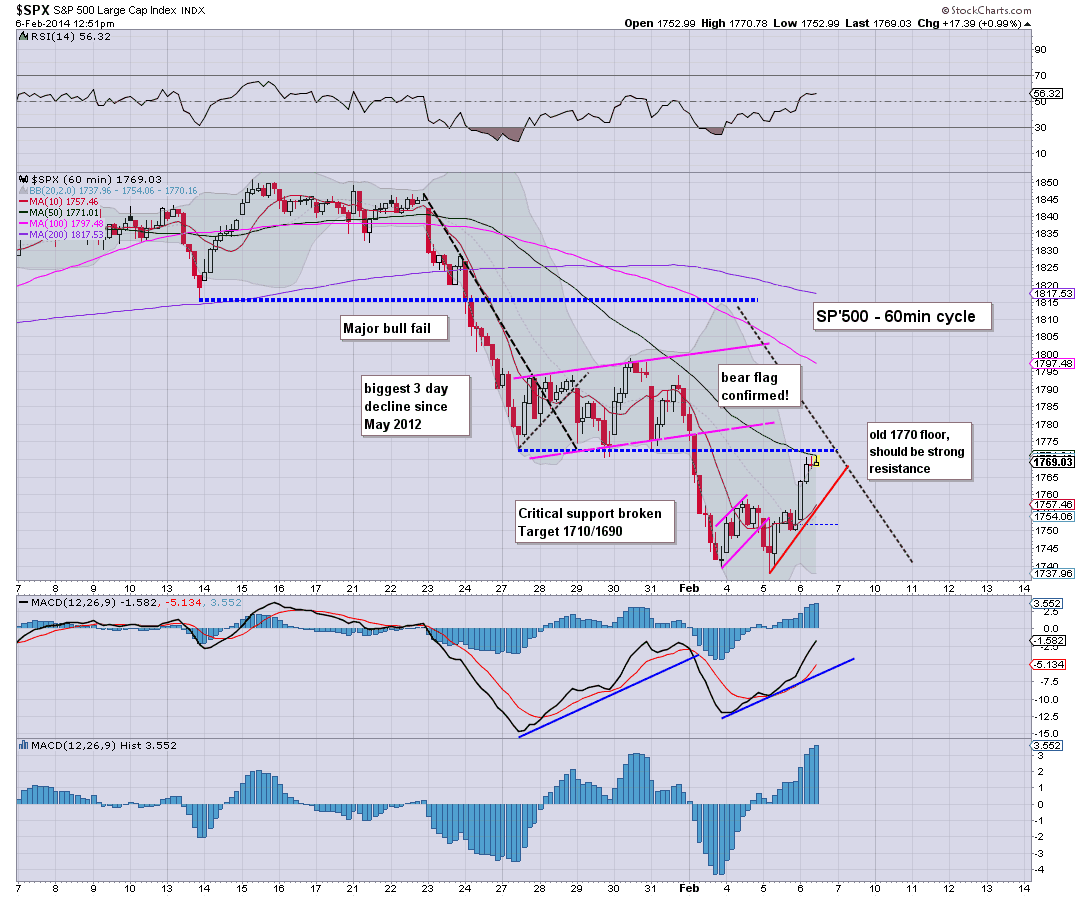 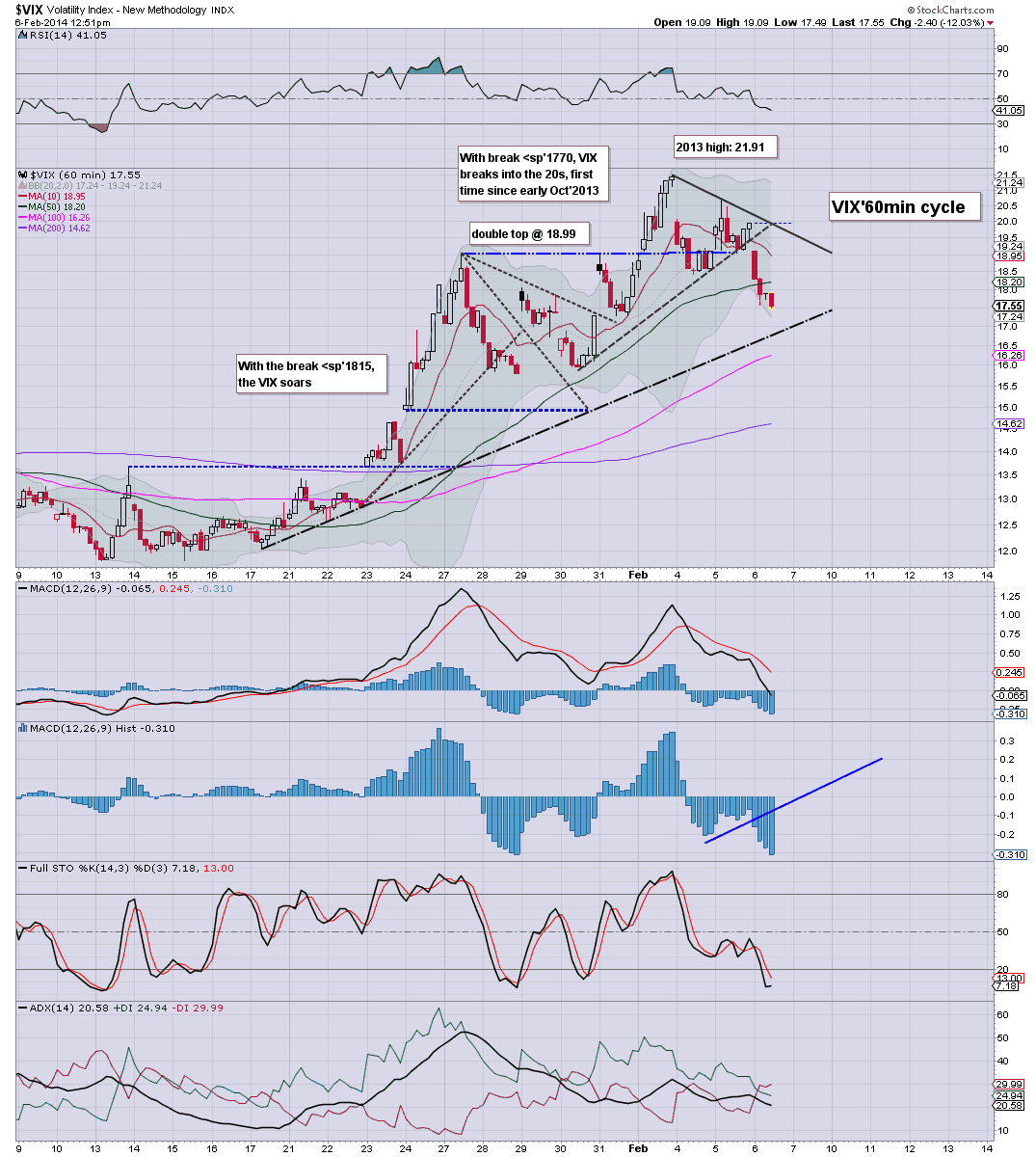 So..indexes look stuck..but the VIX is not yet confirming 1770 as the intraday max.
-

Arguably, equity bears needs to break back the hourly 10MA by end of day, which will be around 1765.
--

Meanwhile, no one seems to want to buy the TWTR, despite the 'bargain' price of $51,,having briefly spiked to $71 yesterday. I'm not sure on what the current PE is, but it must be close to 5000.

Equity bears could do with a close <1760, with VIX back in the 18s, although of course, none of it counts for much..since we'll either gap up or down..rather significantly at the Friday open.

UGAZ having more problems today, -9%, weekly nat' gas charts would suggest another -20% lower for UGAZ is likely.
Posted by Trading Sunset at 17:56:00
Email ThisBlogThis!Share to TwitterShare to FacebookShare to Pinterest

The indexes are holding borderline significant gains of around 1%, with the sp' hovering around 1770 - the old busted floor from last week. VIX has been knocked -10%, back into the 17s. If the market does reverse from here, it'll make for one cruel tease to the bulls (for once). 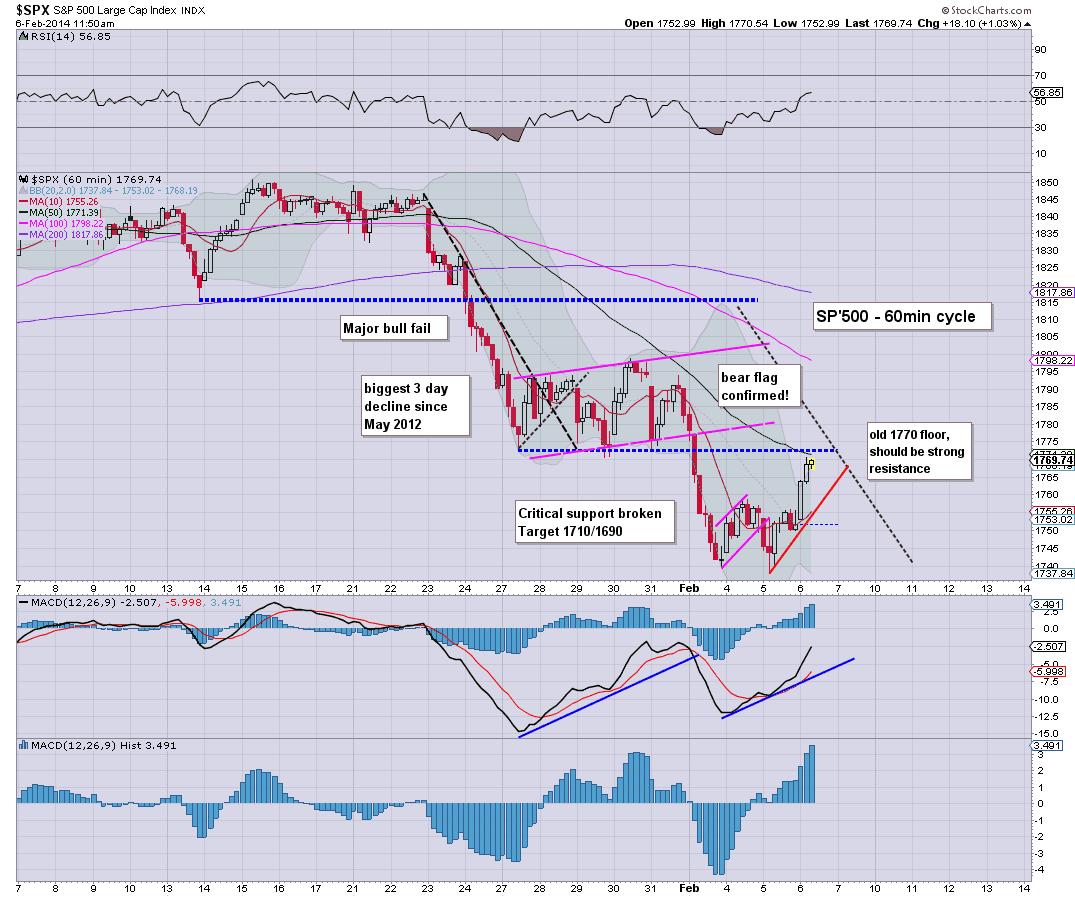 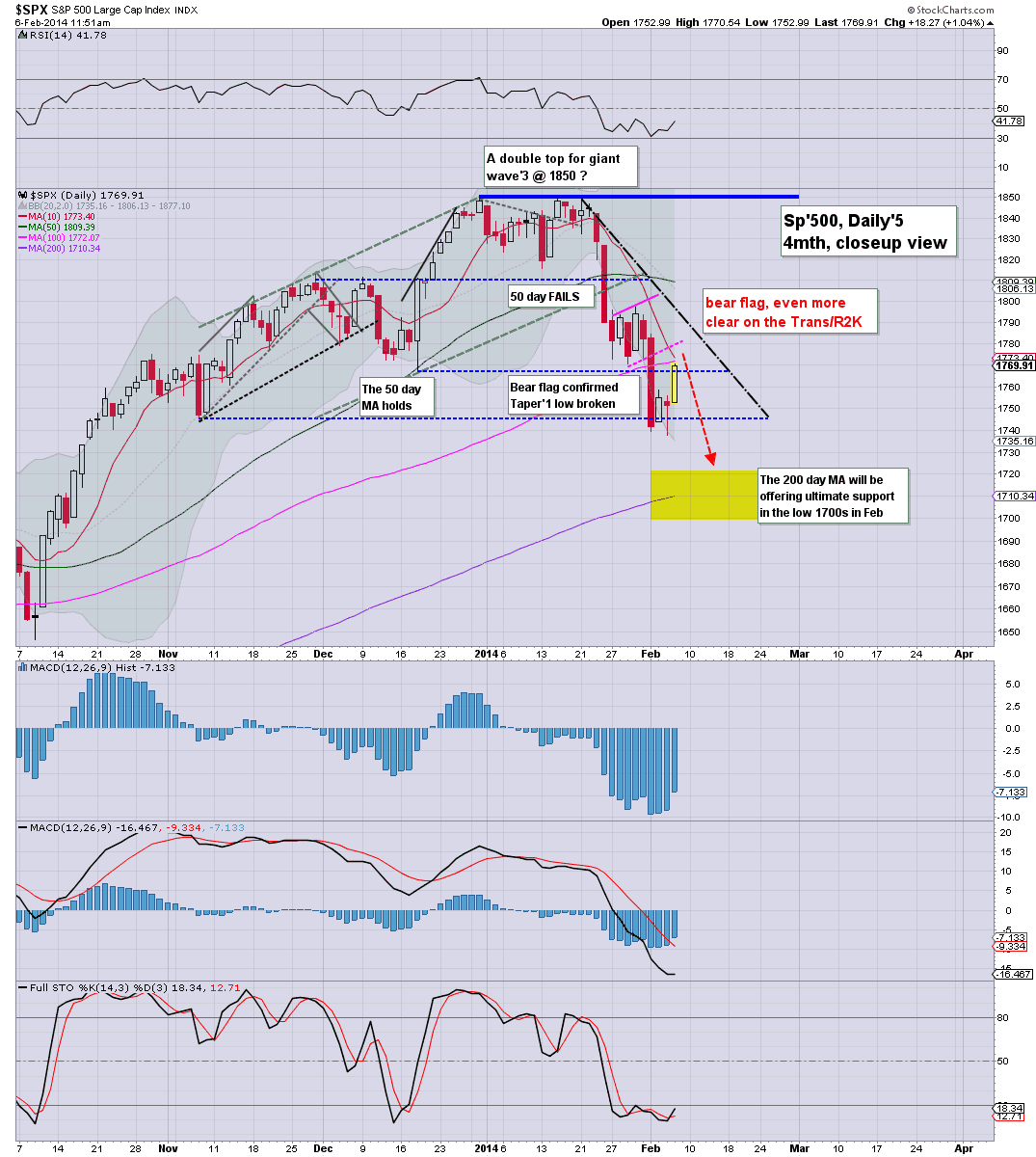 *the daily 10MA - currently 1773, is another key level bears should be desperate to hold under
---

For most bears, this morning is probably way more annoying than even last week when we were stuck in the 1770/1800 zone.

Now we're stuck just under...which is clearly resistance, but if Mr Market likes the jobs data tomorrow morning (regardless of the number...interpretation is everything), then bears will have to exit..regardless of price.

A fair few are launching heavy new short positions here. Anyone long..getting a bonus opportunity to exit at 1770..ahead of the jobs data.

Personally, I'm still looking for a train wreck tomorrow, whilst the weekly cycles remain outright bearish.
Posted by Trading Sunset at 16:53:00
Email ThisBlogThis!Share to TwitterShare to FacebookShare to Pinterest

11am update - Mr Market washing out the short stops 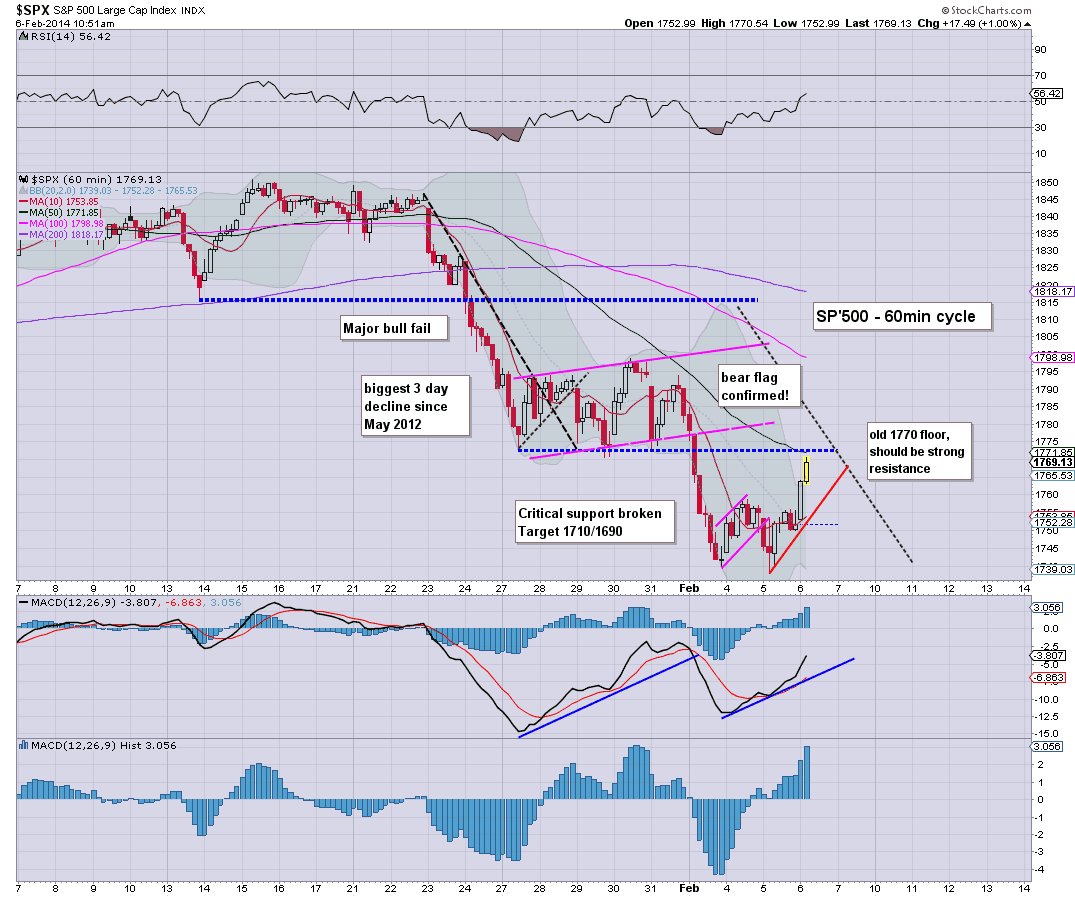 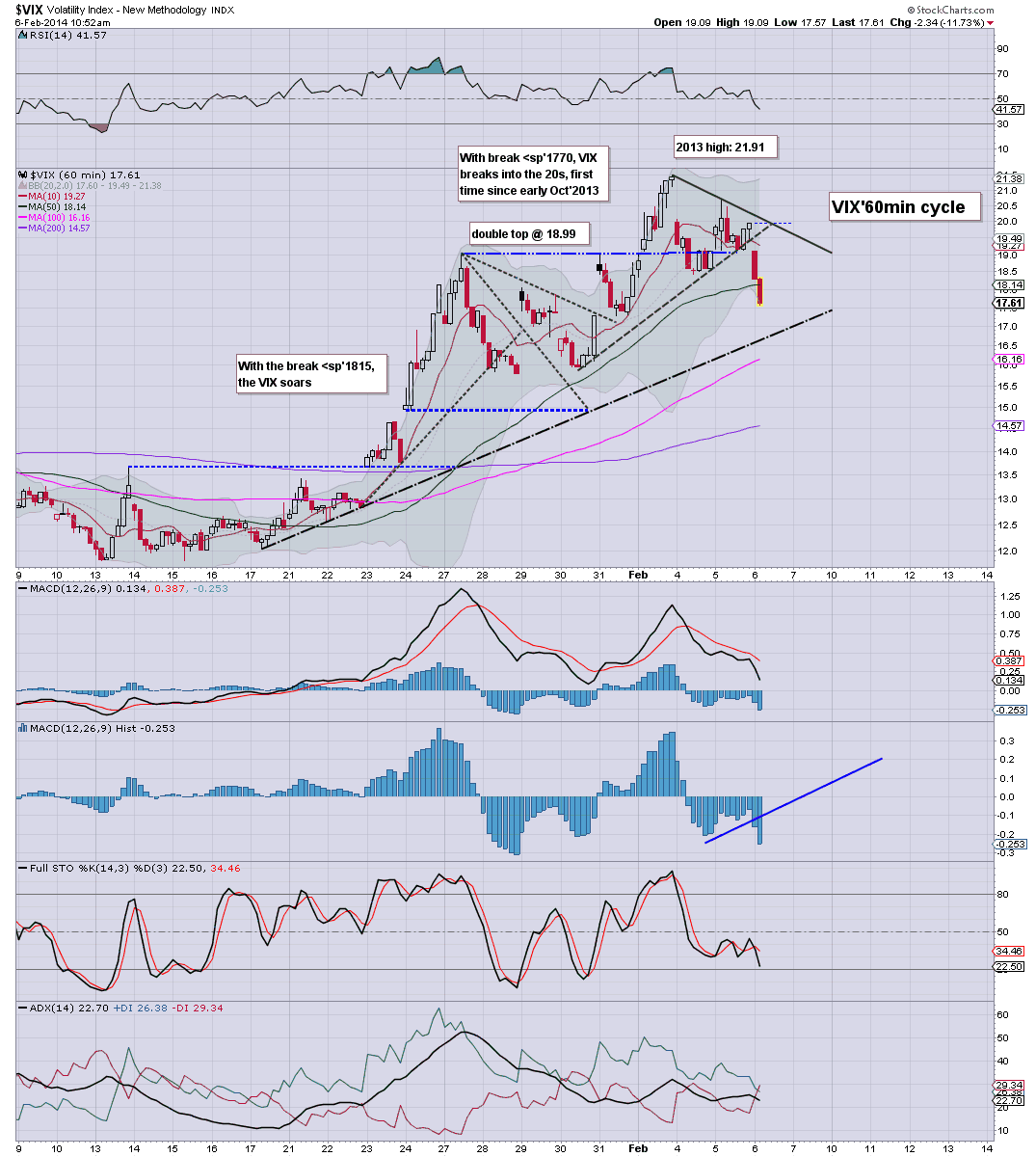 I'm holding to the original outlook, but of course, we're now a clear 60pts from the target zone of 1710/1690 again.
-
Everything will now be dependent on the jobs data tomorrow, but then, that is usually the case.

No doubt some are launching major new shorts here - I'm aware that Knight, over on 'slope of hope' was one of those yesterday literally begging for 1770 to re-short. see HERE.

so...VIX is in the 17s...if the market gets trashed tomorrow..then we're looking at a VIX >22, which right now of course is borderline 'crazy talk'.


11.22am.. Bears need to break back under 1760 by late afternoon to have any initial hope that today was just a fake out - as is sometimes the case the day before a key econ data point.

notable strength: UAL +3.9%
Posted by Trading Sunset at 15:54:00
Email ThisBlogThis!Share to TwitterShare to FacebookShare to Pinterest 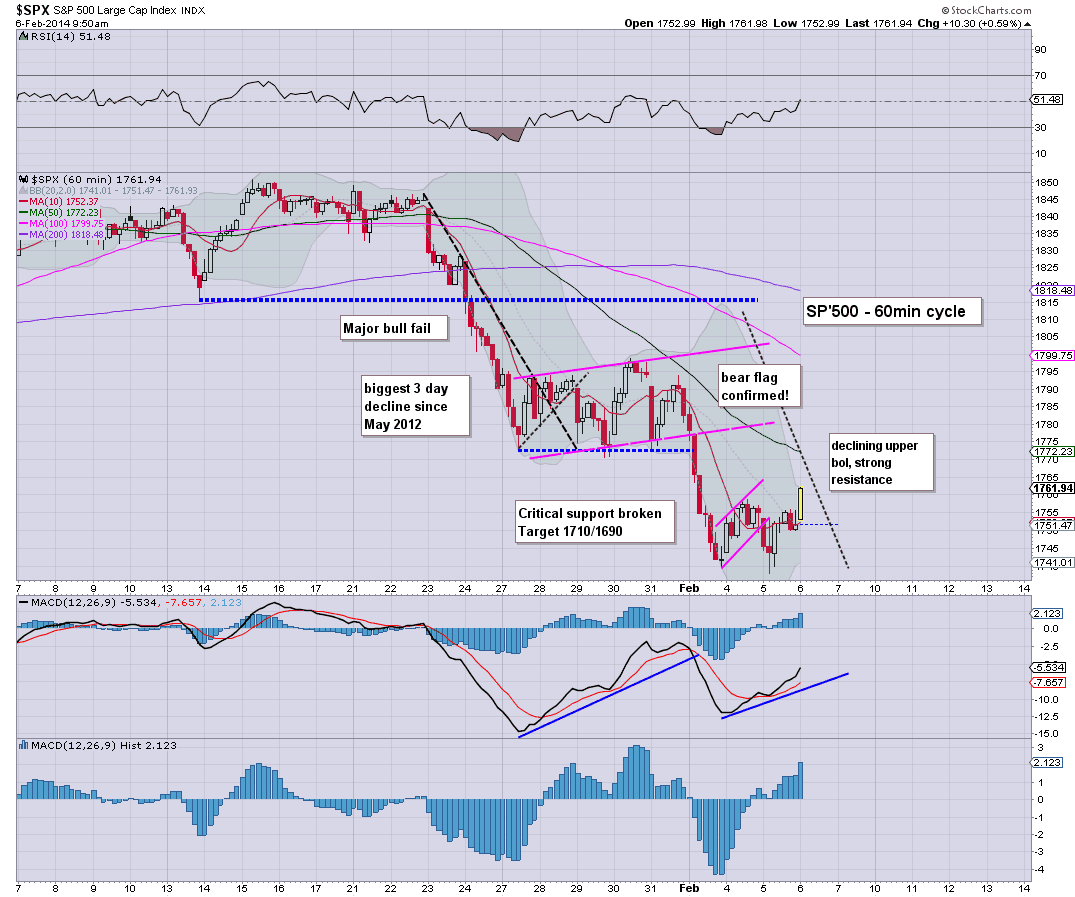 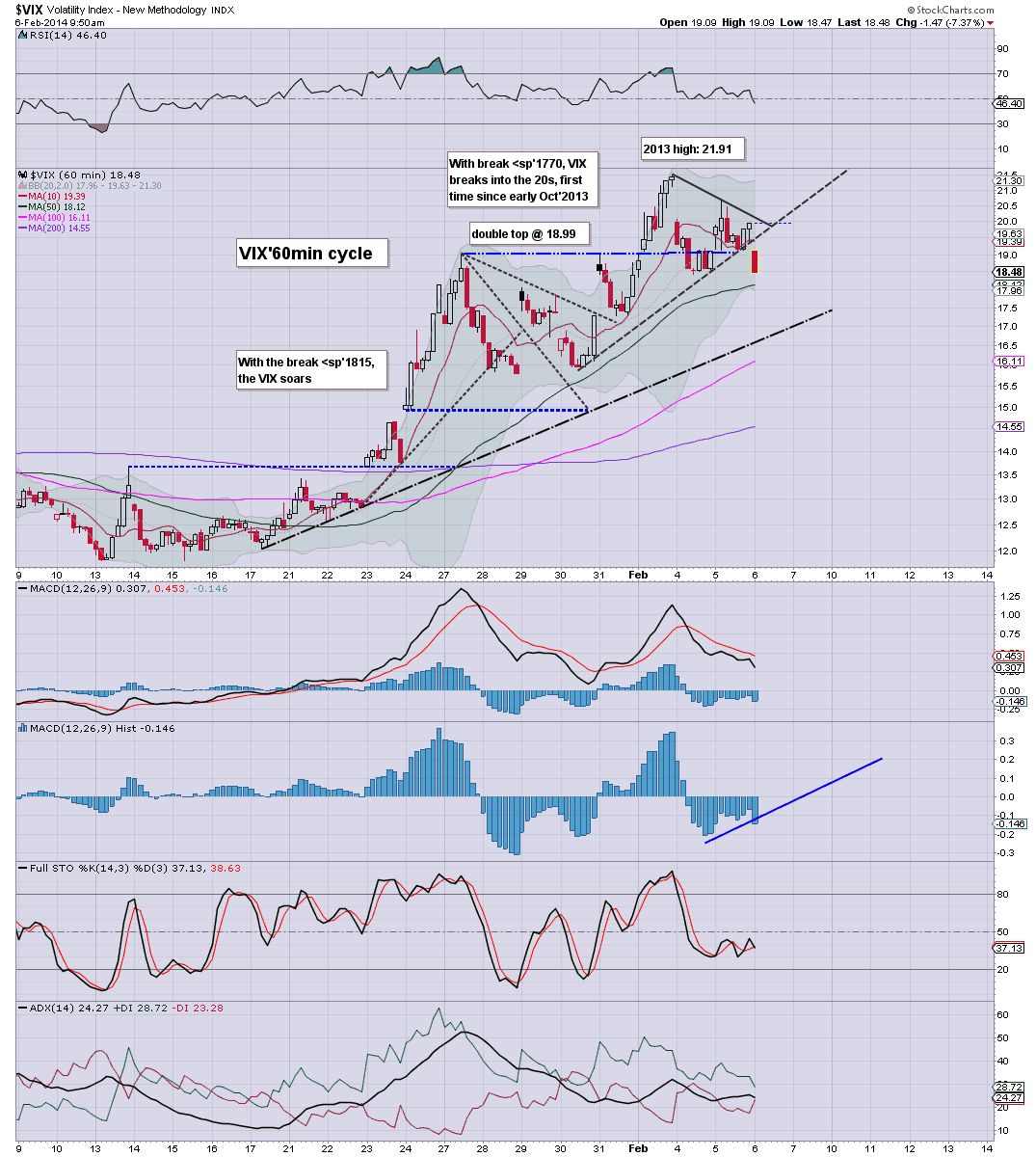 *I'm running on reduced power, so..I might be absent at times today.
-- 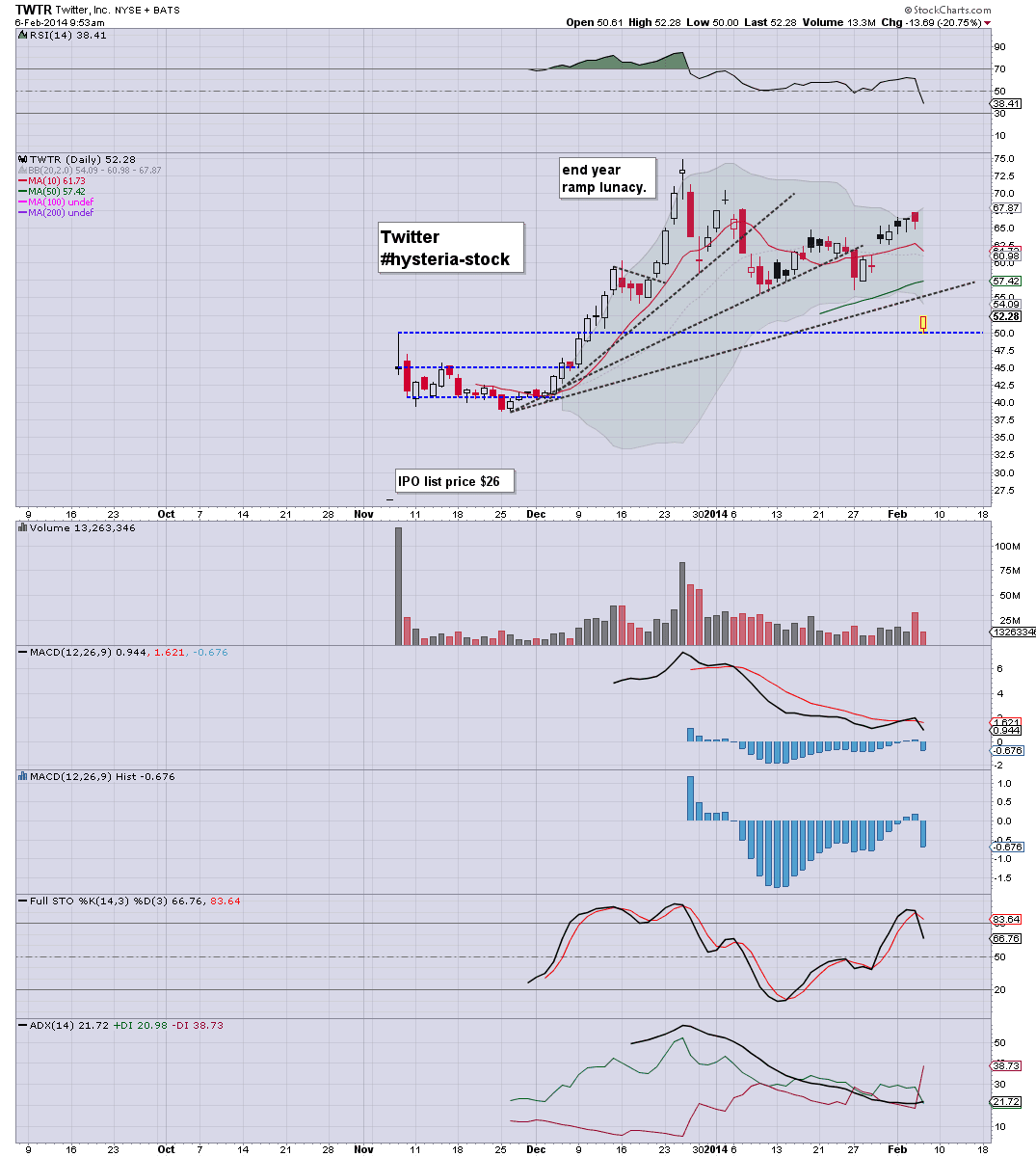 Make of that...what you will.

Amusing to see Oscar refer to them as 'baby bear flags'. I thought I was the only one that did that.
-

Certainly scenario 2 is possible..but there is an awful lot of resistance at the old floor of 1770.

The next few hours are going to be pretty important.

A lot of big money short-stops are going to be hit soon unless this levels out this morning.
-
Posted by Trading Sunset at 14:54:00
Email ThisBlogThis!Share to TwitterShare to FacebookShare to Pinterest

Equity bulls continue to struggle. Despite an intraday recovery from sp'1737 to 1755, the broader trend remains starkly bearish. Baring a super strong January jobs number (>175k) this Friday, the market looks set for another very significant wave lower, down to the 1710/1690 zone. 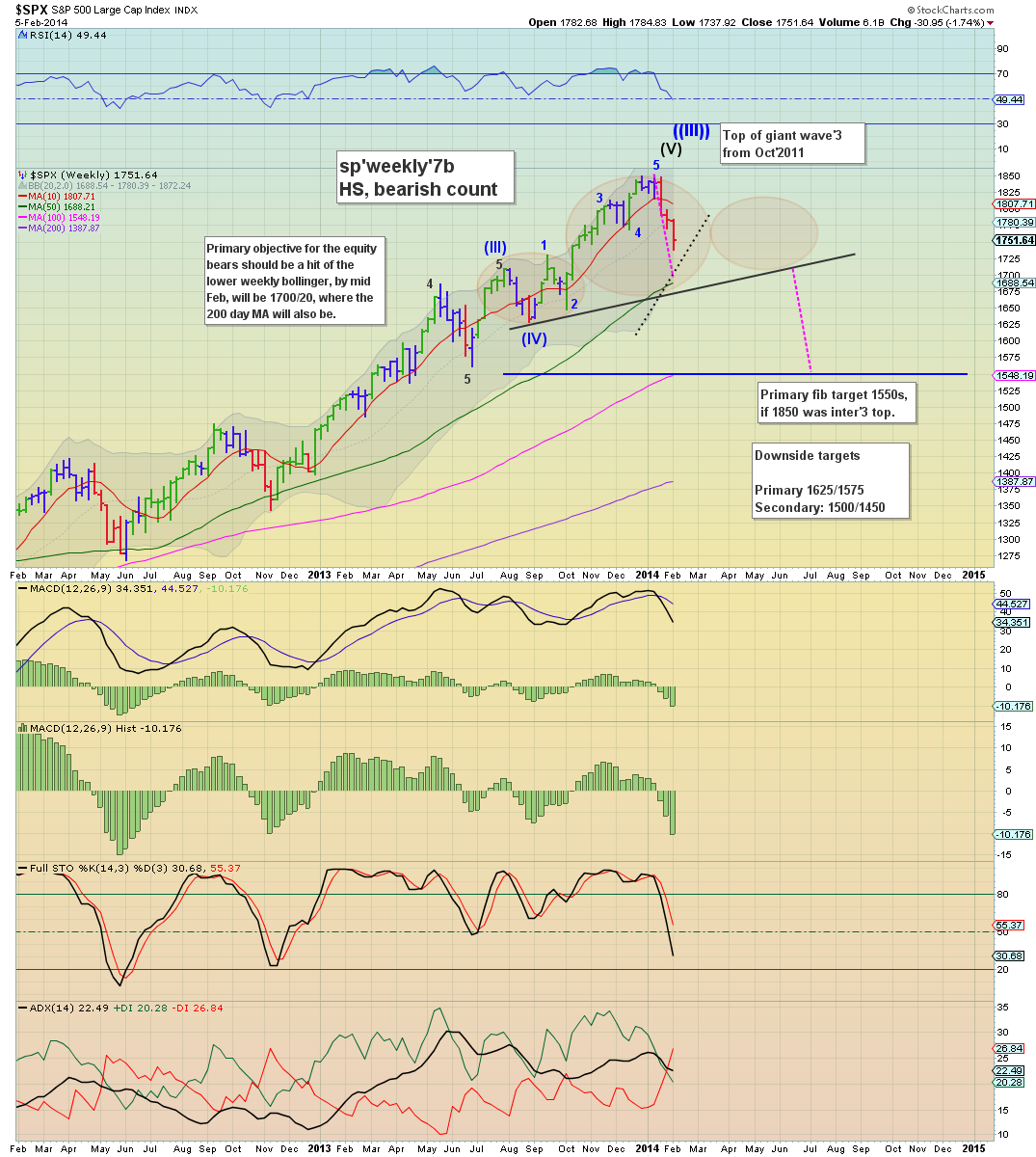 sp'weekly4c -the 'top is in' scenario 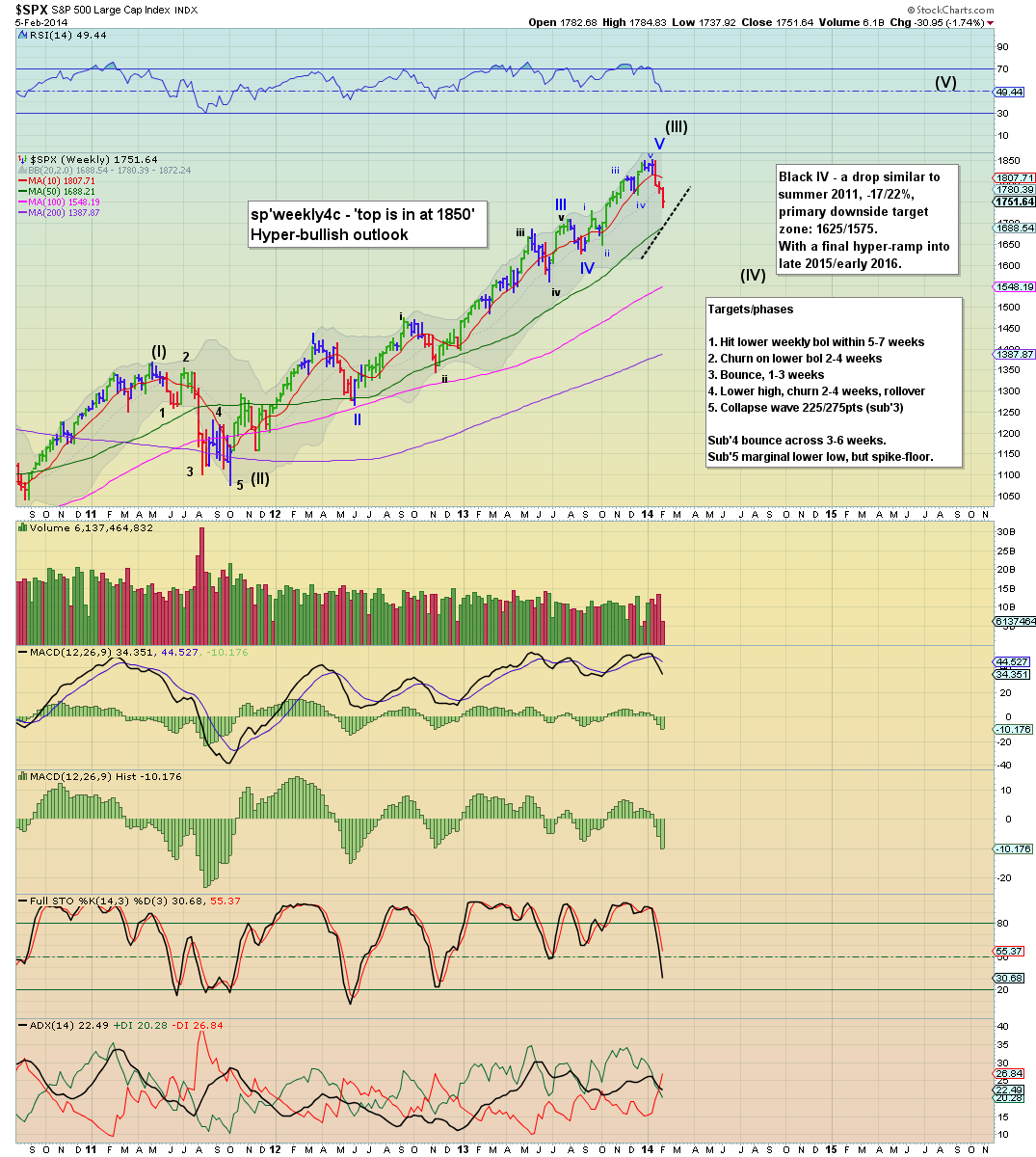 So, a second choppy day for US equities, but most notable..we did break a lower low in the morning.

re: weekly4c.  That remains a very alluring scenario. I will go with it fully, if we hit the lower weekly bollinger - currently sp'1687..but rising 10/12pts a week. So..next week, if we are around 1700, we'll probably have hit it.

Where it will get interesting, if on the next multi-week bounce. So long as we hold <1850, preferably 1775/1800, there is a very significant chance of a major collapse wave to the 1500s this late spring/early summer.

We have trade data, productivity/costs, and the usual weekly jobs data. There are also two fed officials on the loose. 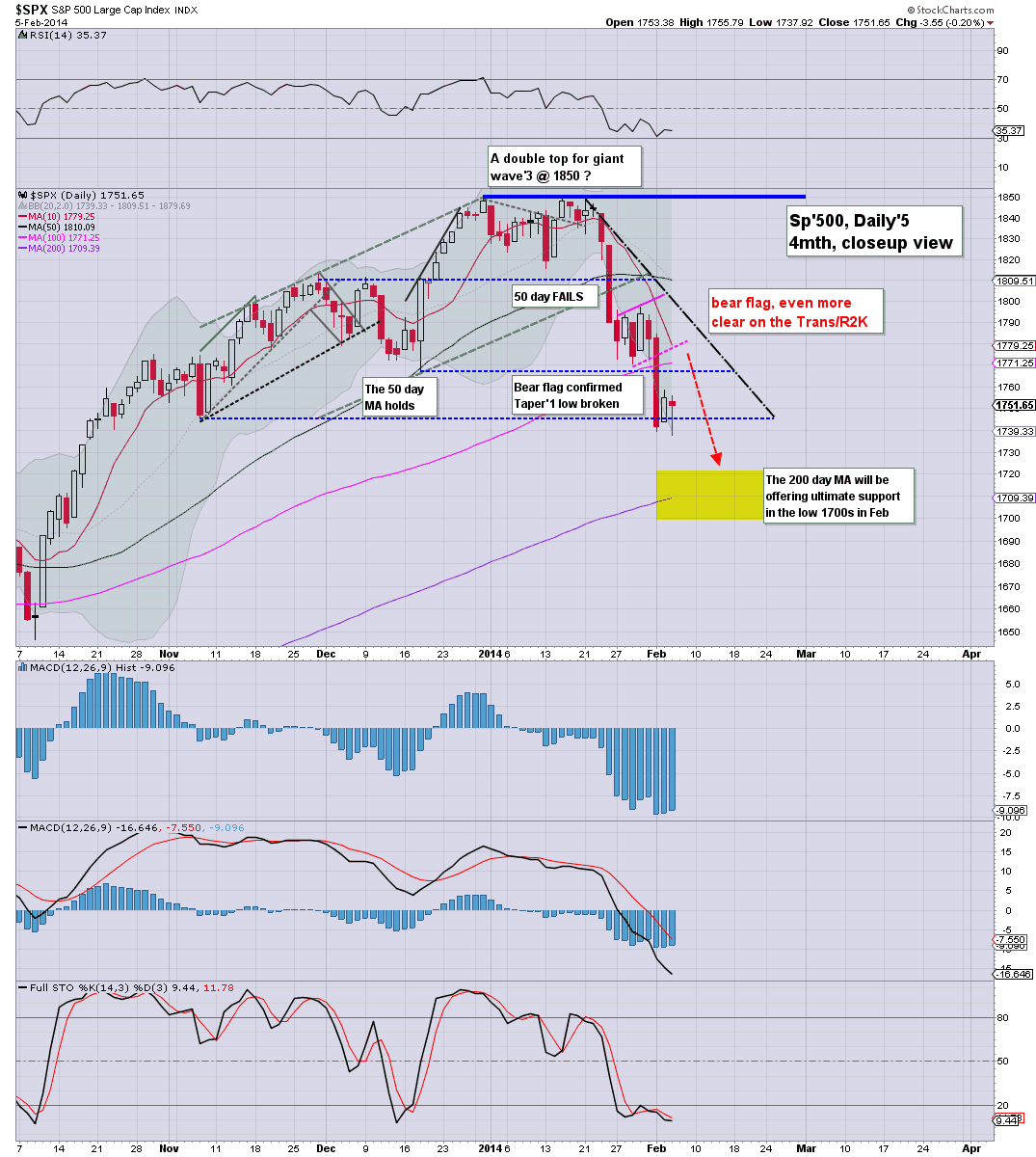 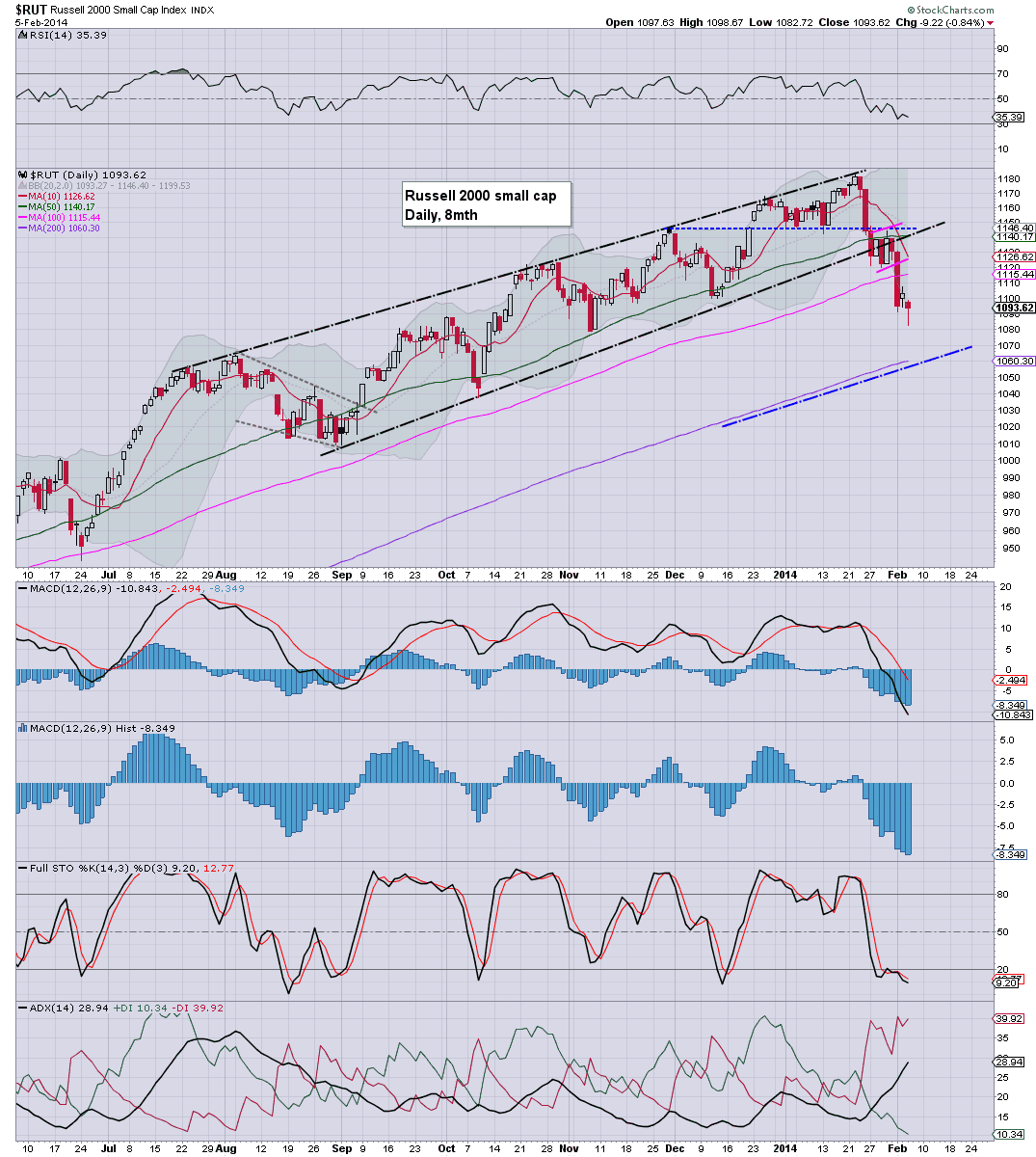 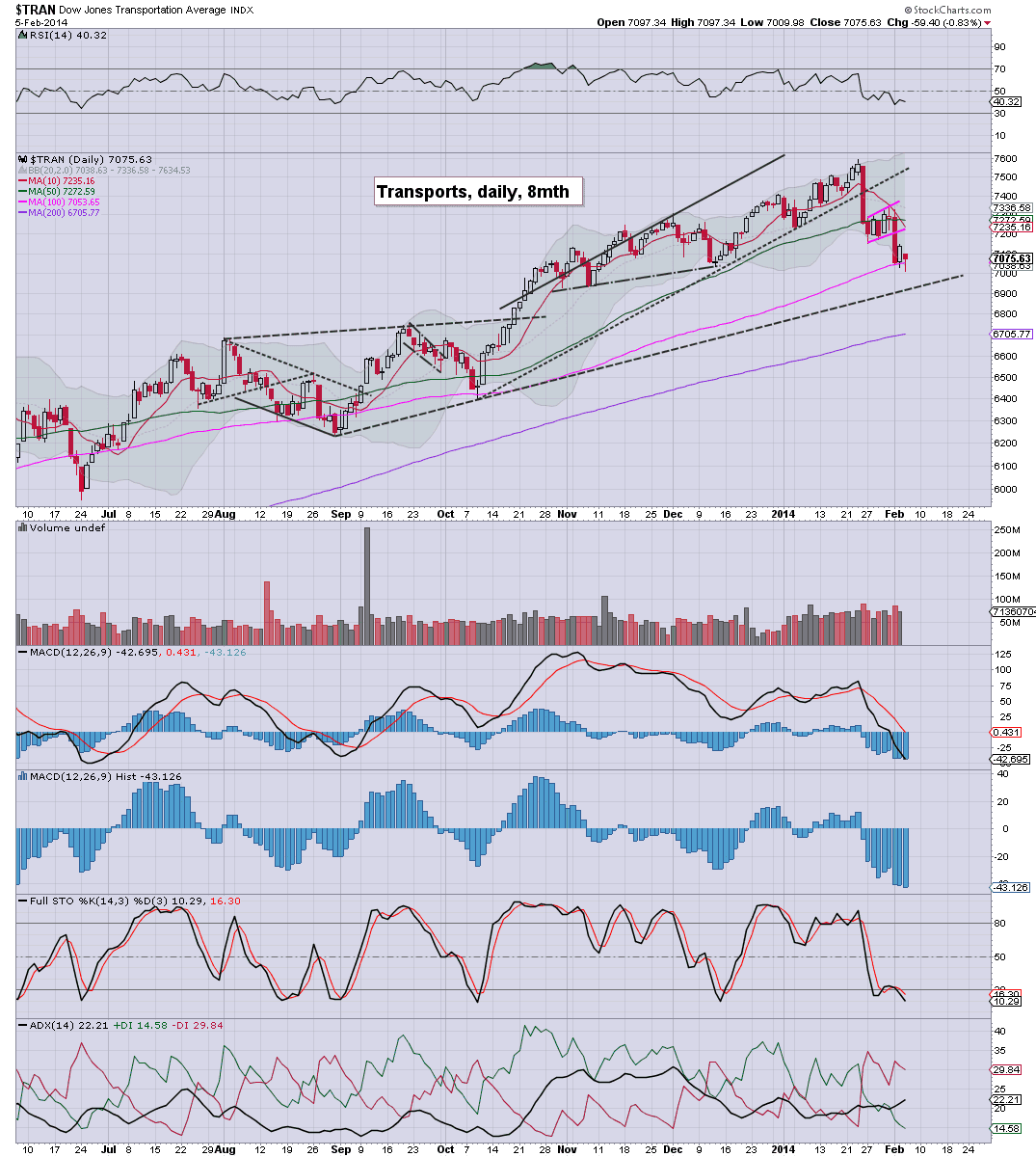 So.. a bit of a choppy trading day..the second in a row.  Most notable, we did break a lower low, with sp'1737, although that was not confirmed by a new high in the VIX.