World equity markets continue to push higher, with the USA (Dow 17k) and Germany (DAX 10k) leading the way. Even the economic basket cases of Spain and Italy continue to build upon huge gains from the summer 2012 lows. Mid-term outlook is broadly bullish into early spring 2015. 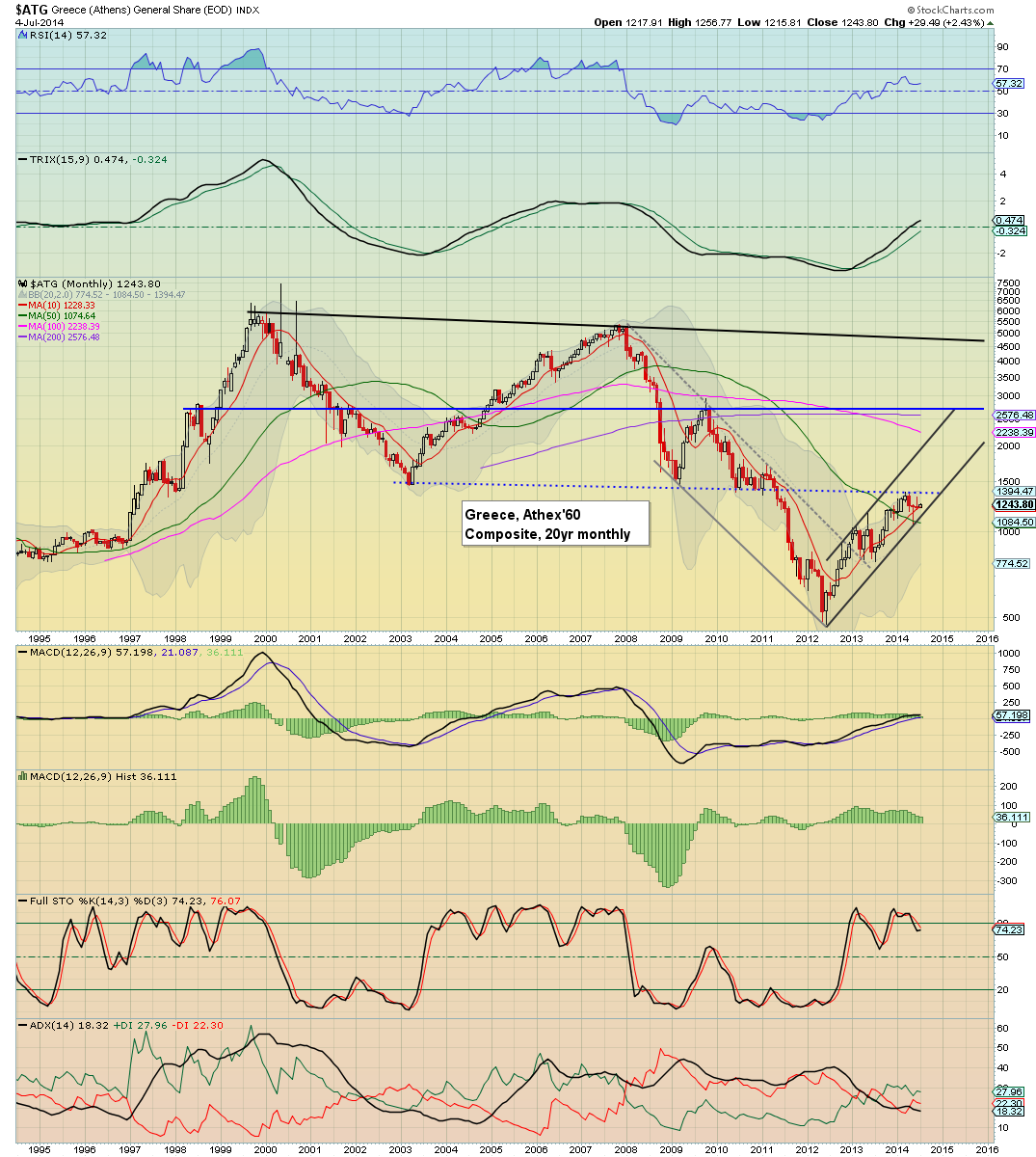 It would be pretty incredible if the Athex is indeed trading around 2500, it would make for a 400% gain in just 2.5 years. Even if that huge gain is achieved, the Greek market would STILL be 50% lower than the 2007 high. 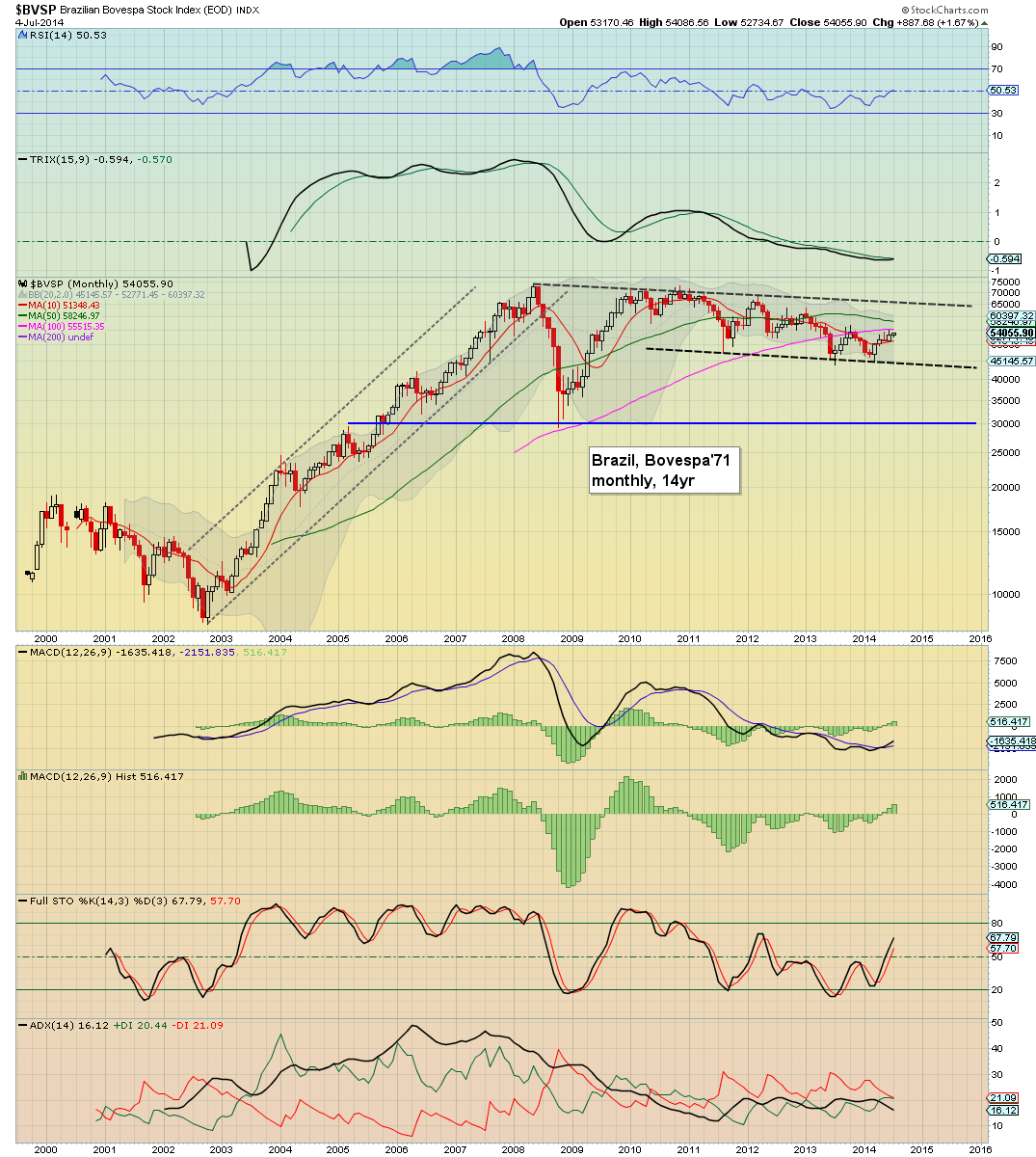 The Bovespa looks set for 60/65k, which is 10/20% higher. An increase in commodity prices would especially help give this market a boost in the remainder of the year. 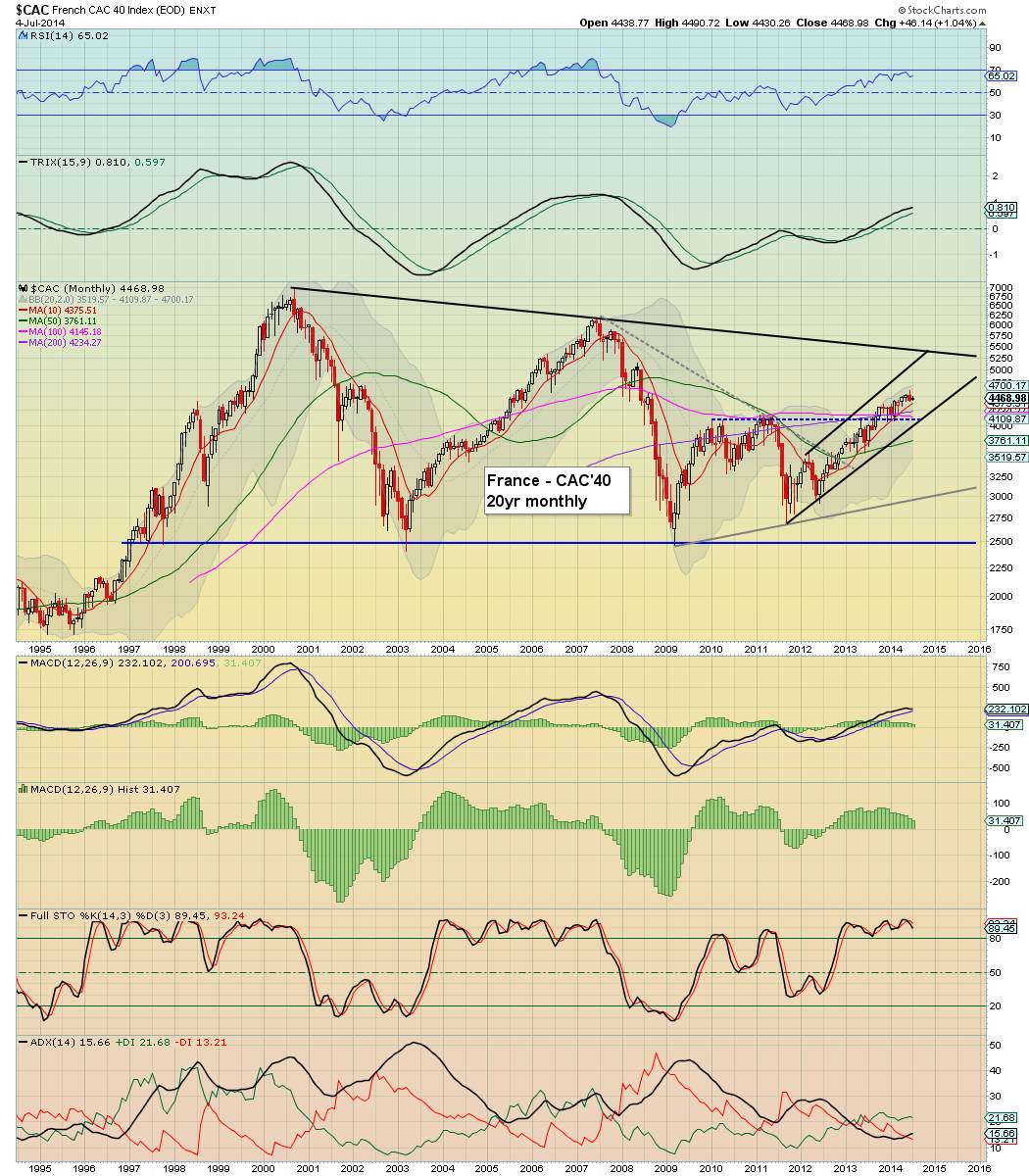 The CAC continues to climb, with viable upside to the big 5000/5250 zone by early 2015. Underlying MACD (green bar histogram) is rolling over though, and equity bulls will need to keep pushing higher. 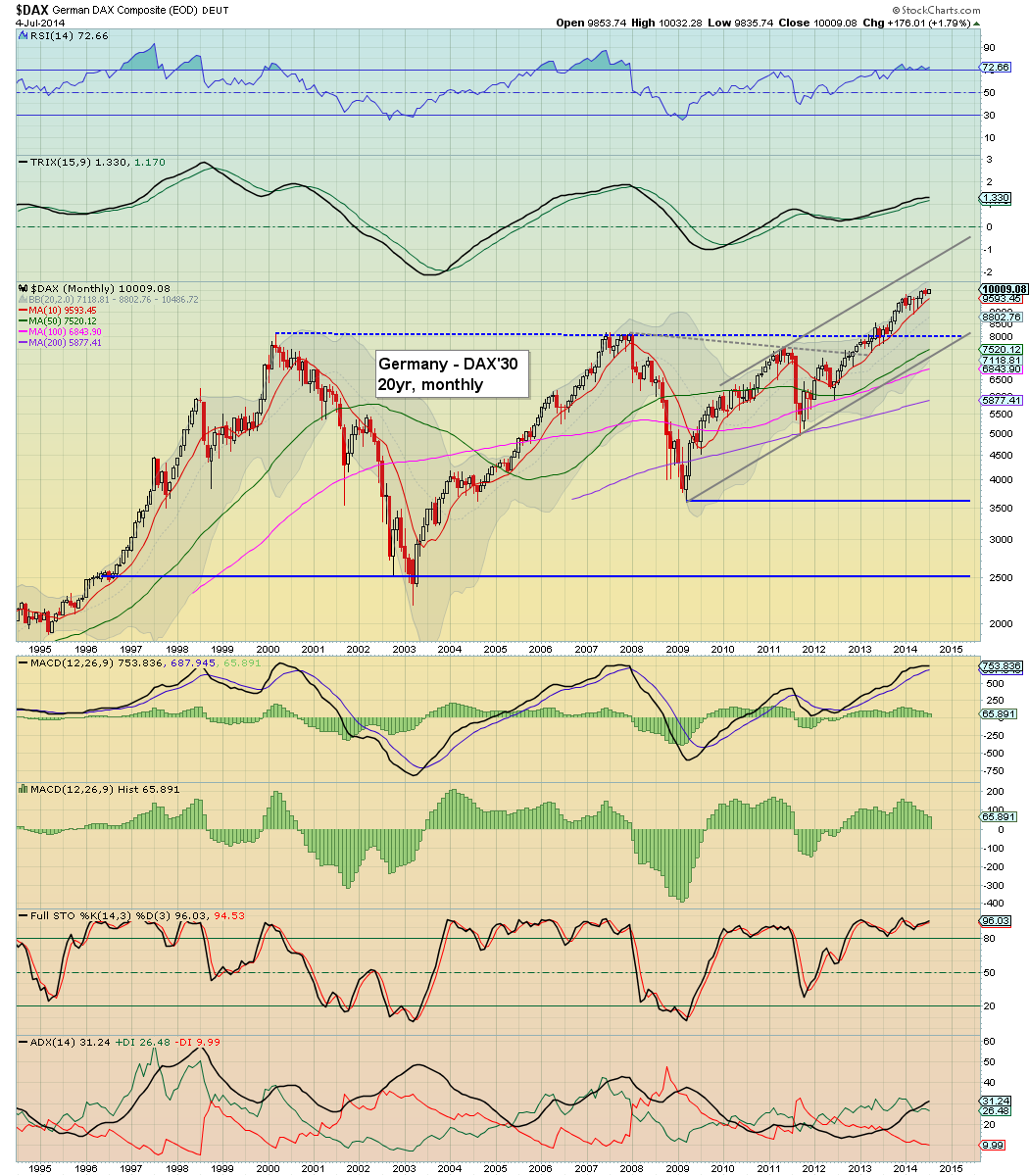 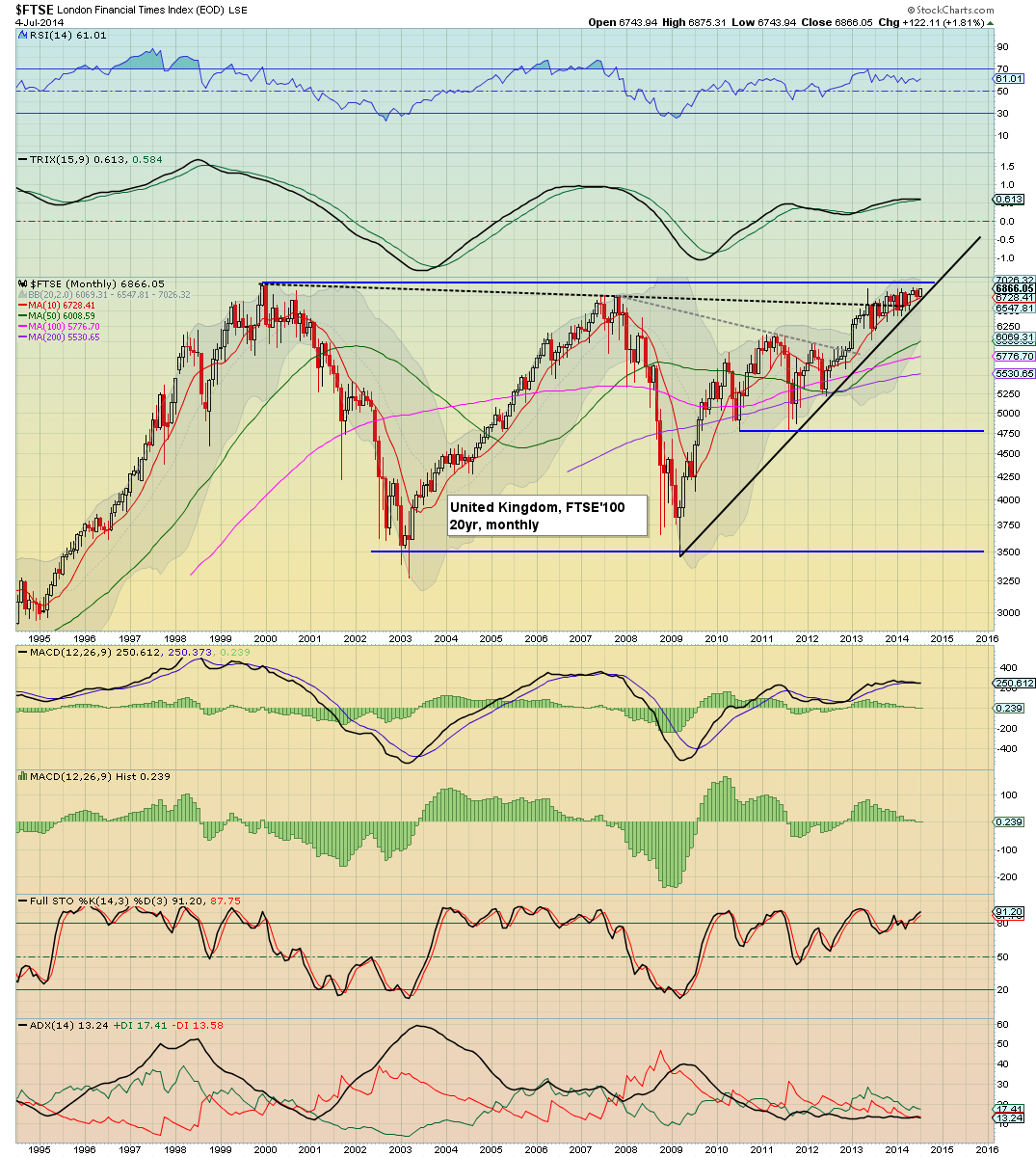 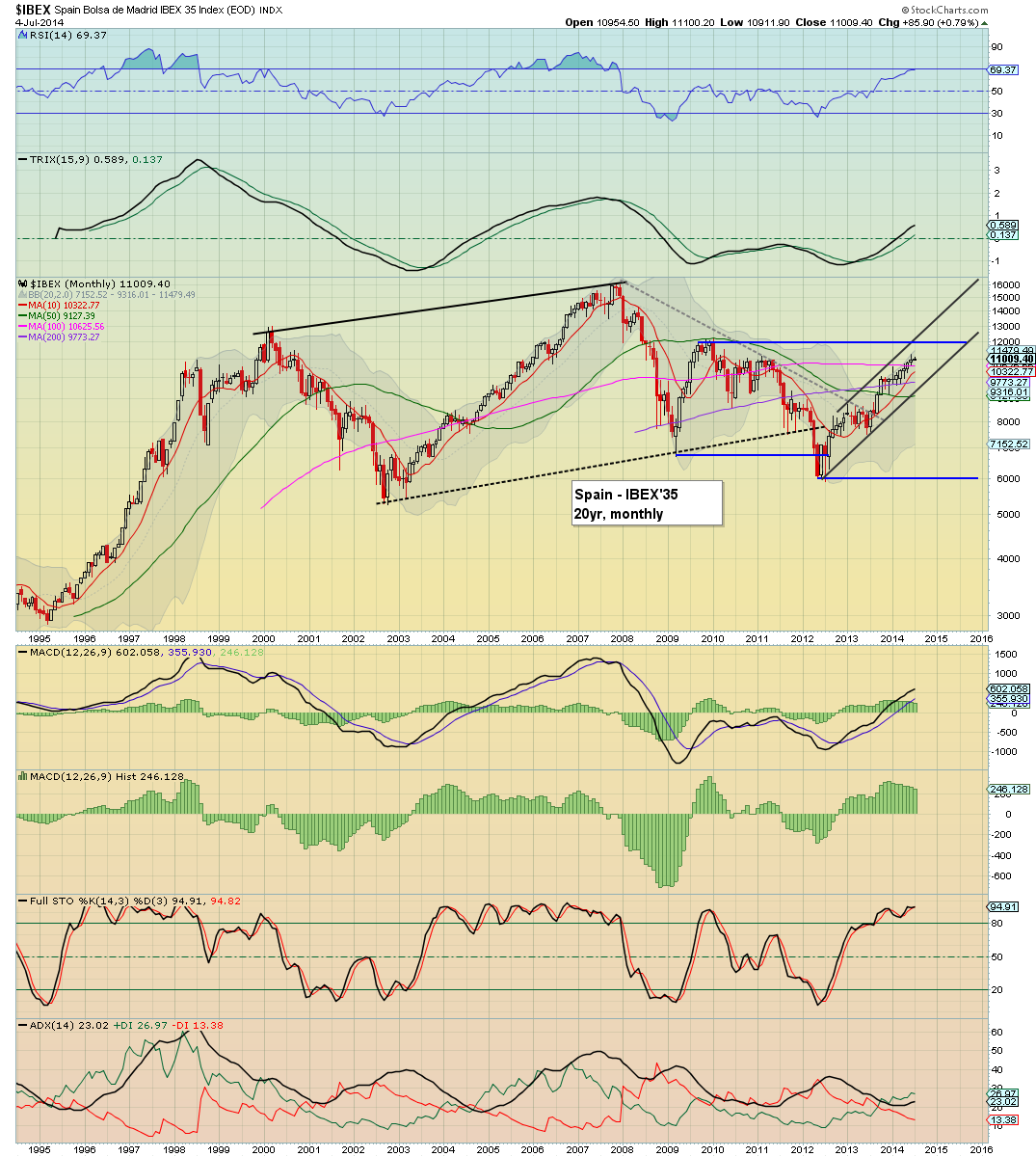 The ugliest of the EU PIIGS - Spain, continues to push higher, and looks set to make a challenge of 12k. Considering the strength in the majority of the world markets, it'd seem likely the IBEX will keep on pushing to the 14k level within a further 6-9 months. 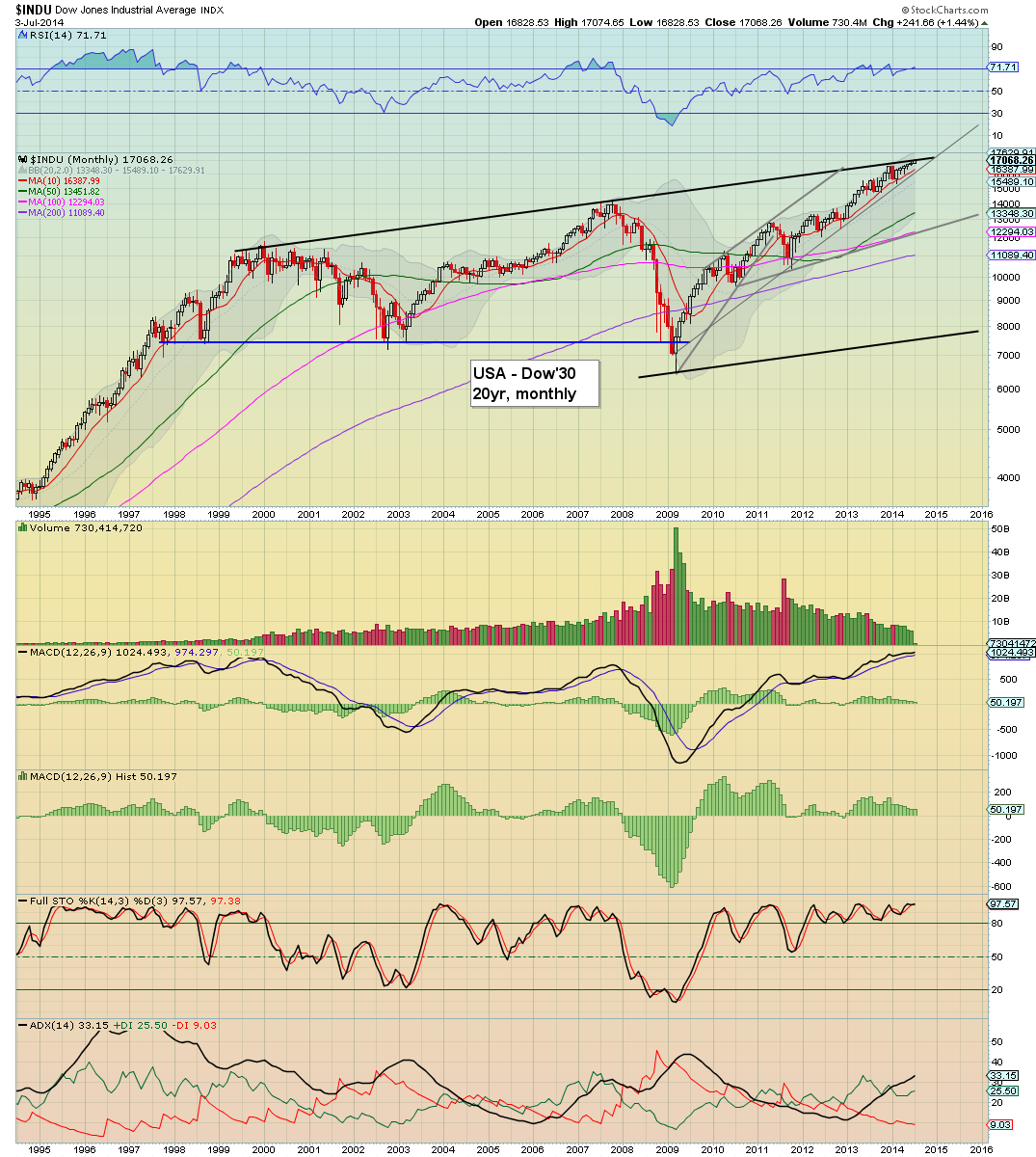 The mighty Dow is now trading in the low 17000s, and an increasing number of market commentators are starting to tout 18k by year end - which would equate to sp'2100s. Underlying price momentum has turned almost back to neutral, but price action is still to the upside. 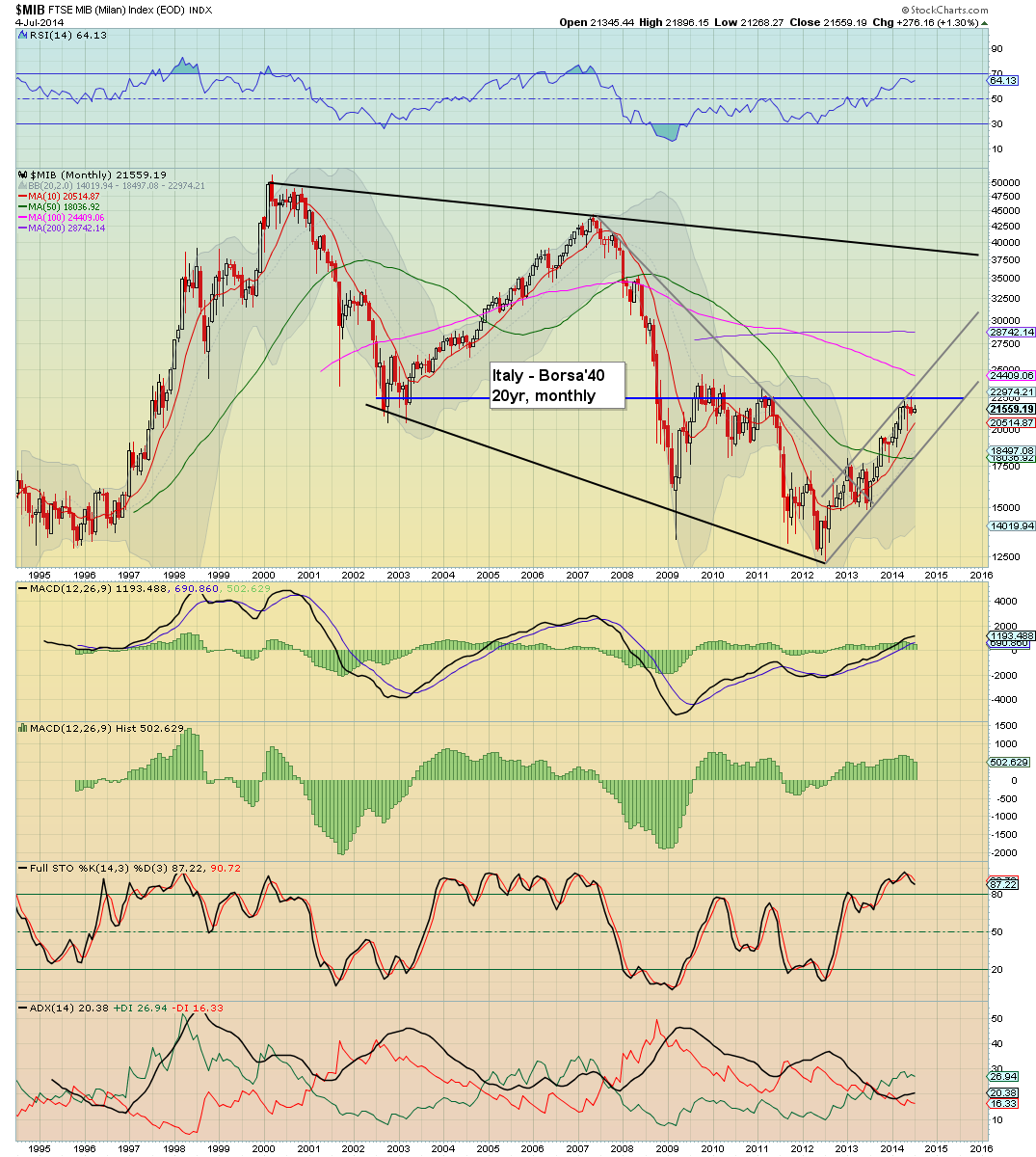 The second of the larger EU PIIGS - Italy, is about to challenge the important 22k level. A break above - which seems more likely than not, will open up 25-27k. 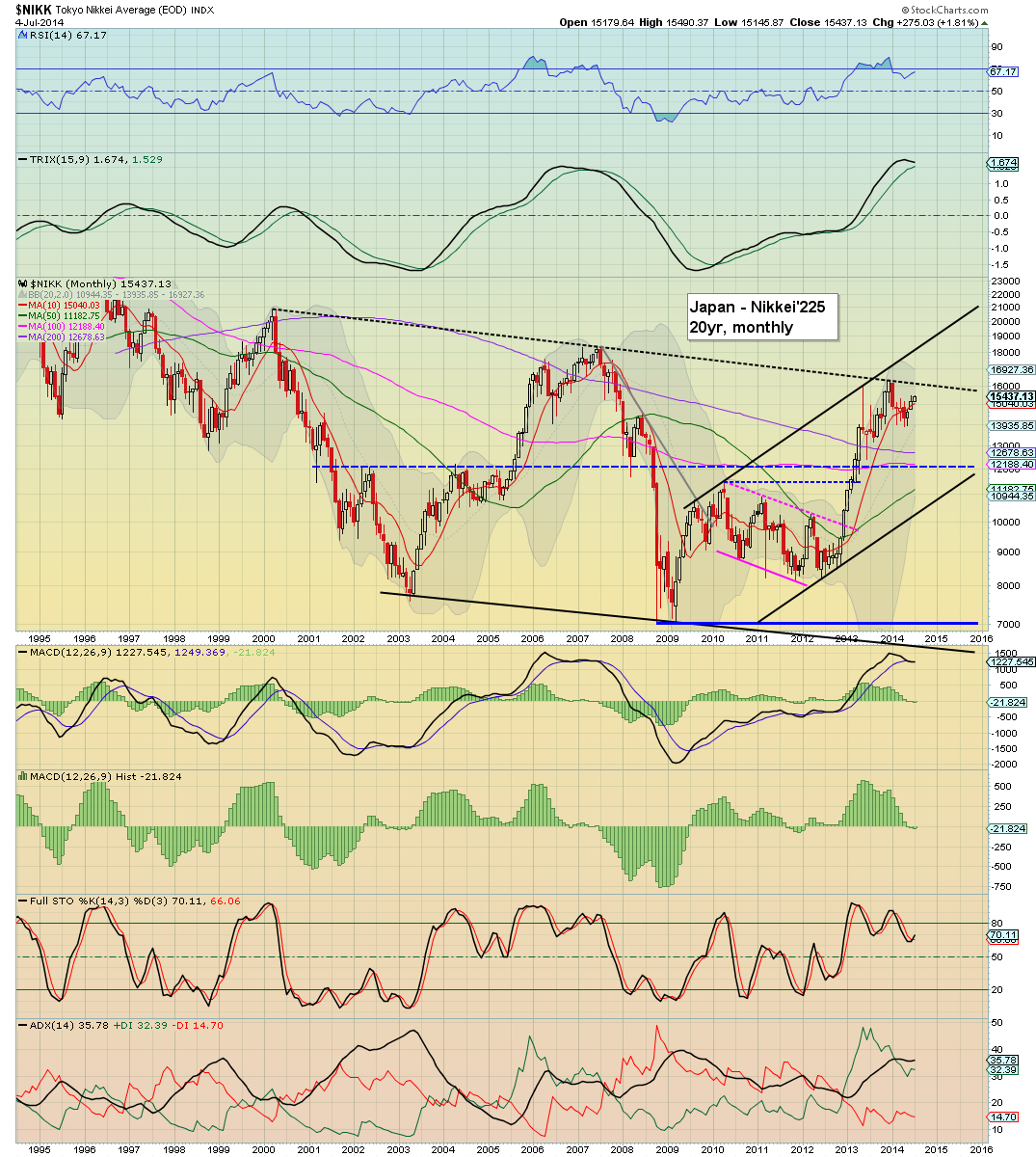 Whilst the JCB continue to think of ever more bizarre policies to pump up asset prices, the Nikkei is still stuck under declining trend/resistance. A monthly close in the 16000s - which is a mere 4% higher, would be enough to confirm a breakout. 16k will open up 18/19k by early 2015... which would be a very significant 20% higher.

It is notable that the MACD cycle is negative for a second month, but it would seem we'll start to cycle higher by late summer. Equity bears need a break under 14k to have any confidence of significant downside. 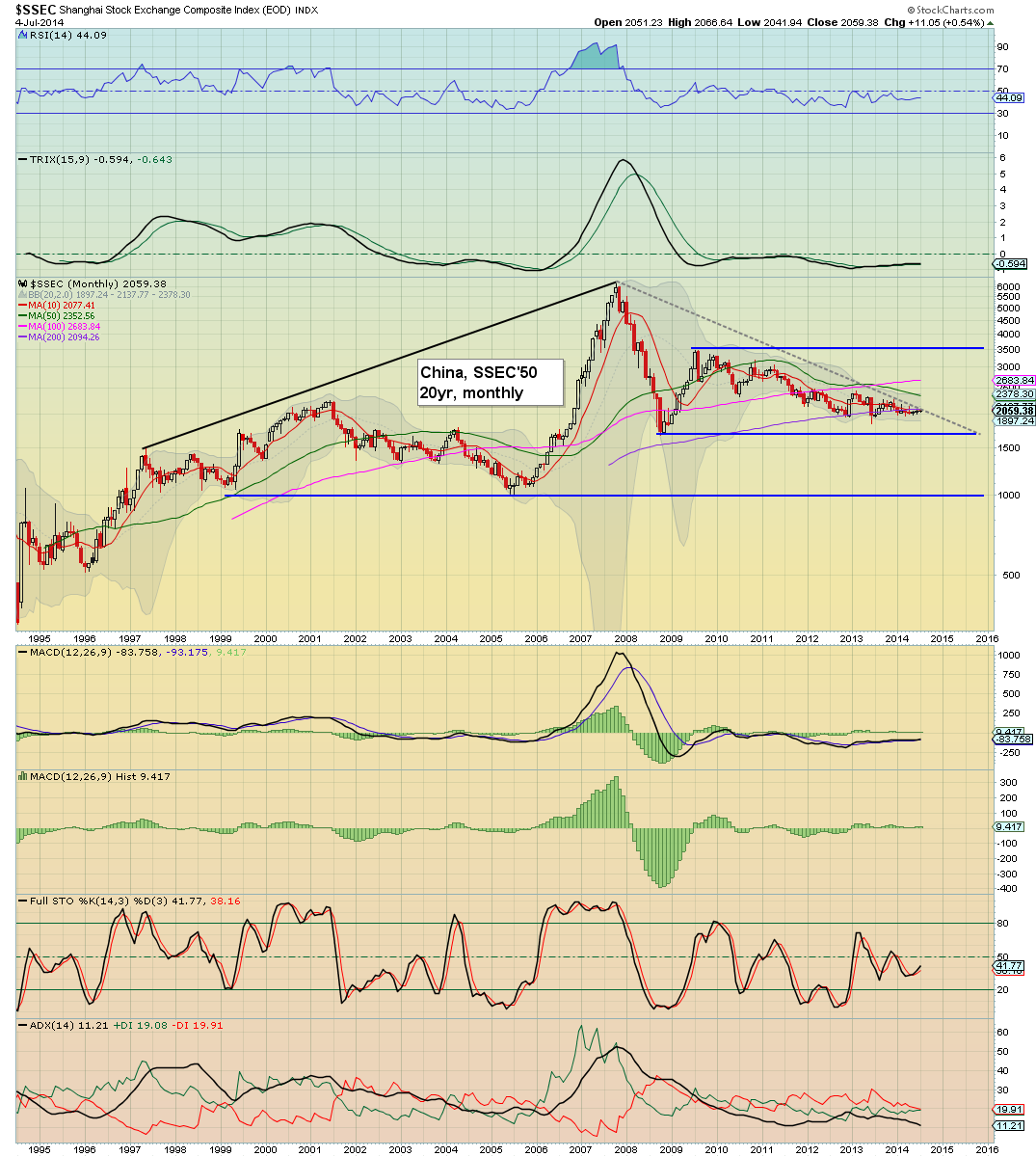 The Shanghai Composite continues to trade sideways - as it has done since 2012. Equity bulls need a break to 2500 to offer clarity that the chop is over. The grander upside target remains 3500 - back to the summer 2009 'recovery bounce'.

Much like the Greek Athex, even if the China market can rally 75% (whether 2015, 16..or later), it will still be around 45% below the 2007 bubble high. For the China investor, it has been a lousy six years, and 6k sure looks an extraordinary long way away.

Most of the world markets remain in broad.. and pretty strong upward trends. There are still notable laggards - China, and Japan, but they are both in a position to similarly break to the upside across the second half.

Equity bulls have downside buffer of 5-10% for most world markets, without doing any significant damage to the broad upward trend.

The week begins with very little, except there is another wheel barrow of QE to give the market a further kick into the sp'1990s.

Wed' will see the FOMC minutes (2pm).. and that might help initiate a minor down cycle, but we're probably only talking about 0.5-1.5%.. at most.

*There are Fed officials on the loose, across Tue', Wed' and Friday. Any one of them might say something that could cause the market to sell (briefly) a little lower.

Earlier hopes that we might see a multi-month decline later this year are quickly fading away. It would seem there is a high probability of sp'2100s - with Dow 18k, R2K 1300s, and Trans in the 9000s. Those levels will probably take 6-9 months to be achieved. If the US indexes do hit those levels, the rest of the world markets will likely reach their equivalent upside targets.

With price action as it is, I have zero intention of launching any index shorts/VIX longs for some months... if not until next spring. I realise some of you 'doomer bears' out there sure don't want to hear that - not least from someone self-titled 'Permabear', but that is how I currently see things.

back on Monday :)
Posted by Trading Sunset at 17:00:00
Email ThisBlogThis!Share to TwitterShare to FacebookShare to Pinterest
Newer Posts Older Posts Home
Subscribe to: Posts (Atom)