VIX crushed for a second day

With equities climbing for the second consecutive day, the VIX continued to get crushed lower, settling -7.0% @ 12.50 (intra low 11.85). Near term outlook is mixed, with the hourly cycle offering a VIX rally across Thurs/Friday, but with sp'2100s closed above... the broader equity trend looks bullish into August. 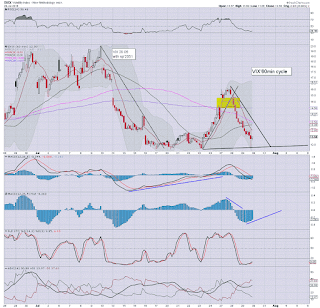 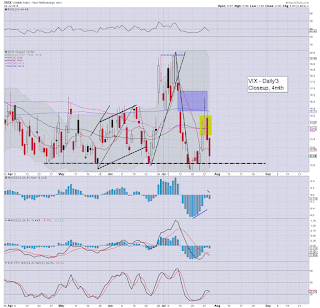 Suffice to say, I'm surprised.. and bemused to see the VIX back in the 12s... even flashing lower to the 11s on the FOMC announcement.

All things considered, VIX is now on the very low side.. as some might say... the only way from here is up...yes?

-
*I remain long VIX from the low 14s.. which now looks a fair way higher! I am confident though I'll claw my way out of that position though.. net higher.

I remain seeking to be broadly long-VIX into Sept/Oct.

US equities closed broadly higher, sp +15pts @ 2108. The two leaders - Trans/R2K, settled higher by 1.7% and 0.5% respectively. Near term outlook is mixed, with the hourly cycles offering a down wave across Thurs/Friday, but the daily close >sp'2100 (where the 50dma is lurking) is a rather bullish signal for early August. 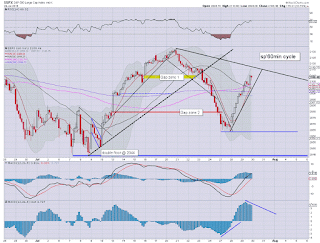 *awaiting earnings from the momo/hysteria stock that is the FB
--

For the bears... a very disappointing day.. and that is probably under-stating it.

Not only did the market manage to close higher for the second consecutive day, but above the psy' level of sp'2100.. and decisively above the 50dma.

Maybe the bears will be lucky and get some kind of weakness across the remainder of the week/end month, but really.. that is mere hope right now. 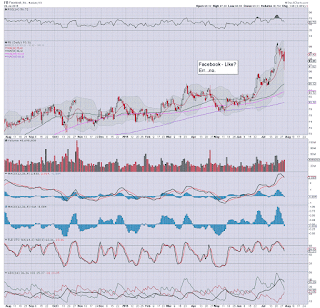 Meanwhile... with a marginal miss in Whole Foods.. the market is upset with it... 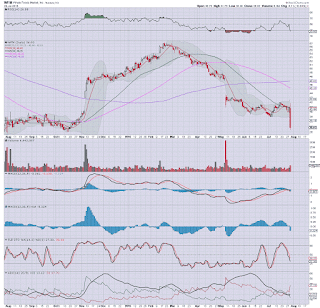 --
more later... on the VIX
Posted by Trading Sunset at 21:00:00
Email ThisBlogThis!Share to TwitterShare to FacebookShare to Pinterest

Despite the Fed still unwilling to give any hints that rates will be raised at the Sept' FOMC meeting, the market is holding moderate gains, with a new cycle high of sp'2109. Equity bears should be desperate for a daily close under the 50dma @ sp'2100... along with VIX back in the 13s. 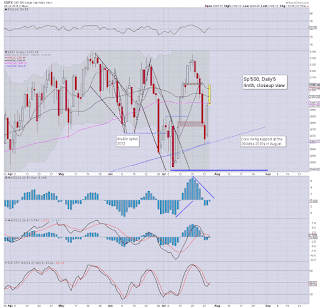 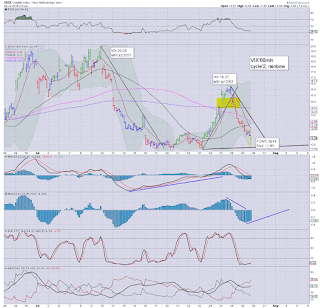 Well, despite some notable chop... the market is so far holding the gains, with a daily close <2100 now looking very difficult... as are VIX 13s.

It remains the case that from a pure cyclical perspective, we're on the high side, and it utterly bemuses me why anyone would be buying (and not selling) above the sp'2100 threshold.. considering the past few months of price action.

Regardless of the close...  not the best of days for yours truly... but I've had far worse.

*FB earnings at the close... so that is something to watch for.

As things are.. with VIX in the mid 12s... it remains the case that it really can't go much lower anyway... right?

Seriously... who wants to buy here?

Oh well.. FB due at the close... maybe they'll spike it to the big $100 threshold.. and then cool from there.
Posted by Trading Sunset at 19:54:00
Email ThisBlogThis!Share to TwitterShare to FacebookShare to Pinterest

2pm update - sunshine ahead of the Fed

US equities remain holding moderate gains.. having ramped from a Monday low of sp'2063 to 2105. From a pure cyclical perspective, the hourly cycles are arguably favouring the bears into the close. USD and the precious metals are broadly flat, whilst Oil has built very sig' gains of 3.0%... as inventories declined. 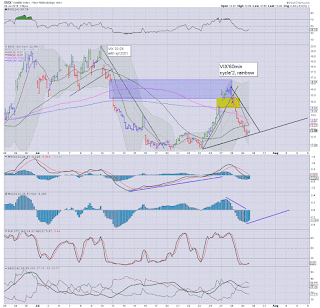 Awaiting some swings... but then.. market should pick a direction by 2.15pm.. and run with it into the close.. and probably into August.
-- 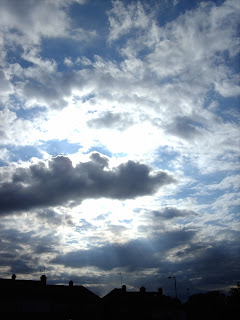 Dark clouds by end of day?

2.21pm.. Equity bears just need to see VIX back in the 13s to offer some clarity of a near term floor. Won't take much to get that.. and there is plenty of time left today. 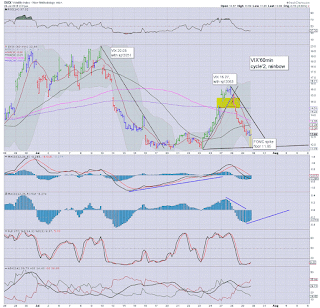 Seeking a daily close in the 13s.. above hourly 10MA.
Posted by Trading Sunset at 18:49:00
Email ThisBlogThis!Share to TwitterShare to FacebookShare to Pinterest 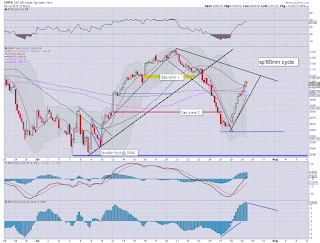 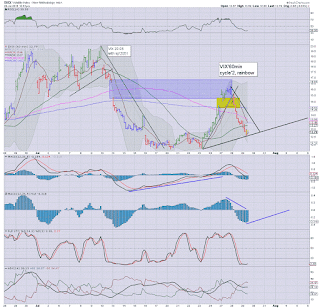 *for the record, I still think we will see some equity weakness after the fed press release.. and into the close.
--

back.. just before the Fed announcement.
Posted by Trading Sunset at 17:52:00
Email ThisBlogThis!Share to TwitterShare to FacebookShare to Pinterest

US equities continue to battle upward, with a new cycle high of sp'2105.. a clear break above the 50dma. Indeed, the real issue now is whether we will see a post FOMC reversal... or the gains holding, with a daily close in the sp'2100s. Considering the VIX is already crushed in the 12s... the bulls face a problem. 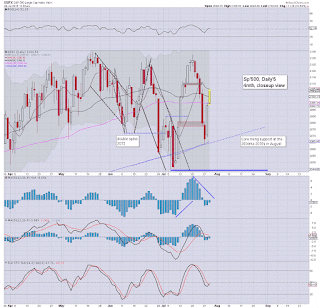 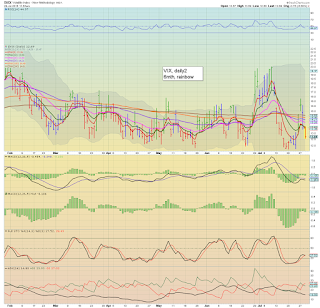 *the blue candle on the VIX turns red... if it closes red.. it would bode in favour of the equity bears into early/mid August.
--

-
time to see what the cheerleaders on clown finance TV are saying...
Posted by Trading Sunset at 16:56:00
Email ThisBlogThis!Share to TwitterShare to FacebookShare to Pinterest 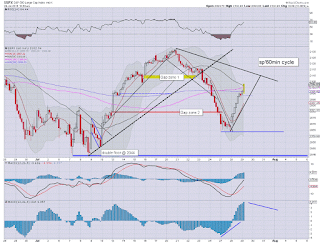 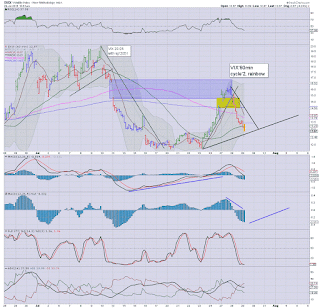 *washout.. as in the market washing out the weaker bears.
--

This is getting somewhat annoying (not least in terms of the VIX).... but then.. its a fed day.

For me.. what matters is where... and the style in which we close the day.
--

As it is, we're now around 2% higher from the Monday low... based on what... good earnings data?

US equities open with some minor chop, with the sp' hitting 2097...and VIX in the low 13s. There are multiple aspects of resistance around the sp'2100 threshold, and considering the hourly equity/VIX cycles, the market looks set for some weakness in the late afternoon. 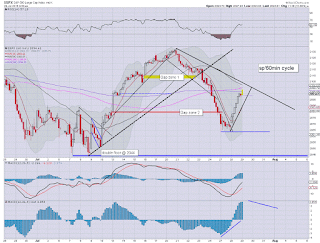 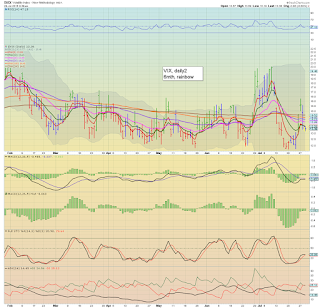 Well, in many ways... its a case of 'come back in 4 hours time'. Until the FOMC announcement is out of the way... there really isn't much to add.

That will give opportunity to highlight some other things though... 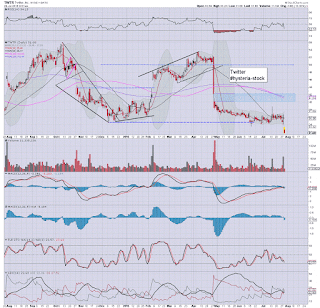 Market is expecting 2.9% growth, but to me.. that seems overly optimistic. I'd not be surprised to see 1.5% or lower. Oh well, we'll find out tomorrow at 8.30am.
Posted by Trading Sunset at 14:51:00
Email ThisBlogThis!Share to TwitterShare to FacebookShare to Pinterest

Good morning. Futures are moderately higher, sp +5pts, we're set to open at 2098. From a pure cyclical perspective, equities will be particularly vulnerable later today and into early Thursday. With the USD broadly flat, metals and Oil are similarly u/c. 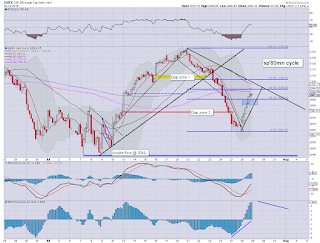 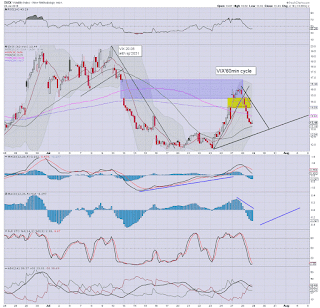 Expect a lot of minor chop into the afternoon. Then.. some swings... and then the market is going to pick a direction... and likely stay with it into next week.

There is key GDP data tomorrow morning.. so that will be an issue... but still... equity bears should be somewhat desperate for a net daily decline today... even a moderate one.

TWTR -9% in the $33s. An ugly reversal from the AH high of $40.90. It would seem that acting CEO Dorsey can really upset the market with each word he mutters.

Have a good Wednesday!
- 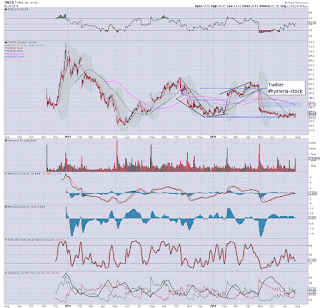 Keep in mind the IPO price was $26 in Nov' 2013. The lowest level ever traded was $29.51 (May 7th 2014). Considering anticipated main market weakness into the early autumn, and the break to the 32s post earnings, further weakness to the IPO price looks probable.
-


8.48am.. Indexes cooling.. back to flat...   sp' 2093.  Regardless of the exact open though.... minor chop into the afternoon. Then things get dynamic.
Posted by Trading Sunset at 12:46:00
Email ThisBlogThis!Share to TwitterShare to FacebookShare to Pinterest

The importance of the monthly 10MA

Whilst equities saw a significance bounce from the Monday low of sp'2063 to 2095, the bigger picture remains increasingly bearish. There remains a high chance that the market will see a monthly close under the 10MA.. currently @ sp'2066. 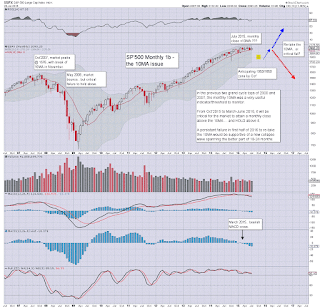 I think the chart and annotations speak for itself.

Suffice to add... if we do get some degree of sig' correction under sp'2000 this Aug-Oct', what then follows will shape the following 2-3 years.

*The Transports and Dow are already below their respective 10MAs... but frankly.. I'm tired... and I can't cover all the indexes in every post!
--

Wed' is Fed day, the FOMC announcement is due at 2pm.... but there will NOT be a Yellen press conf'. 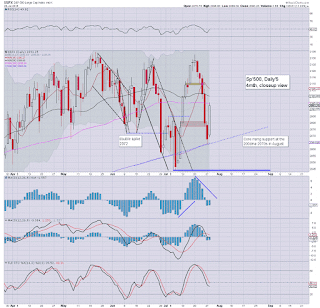 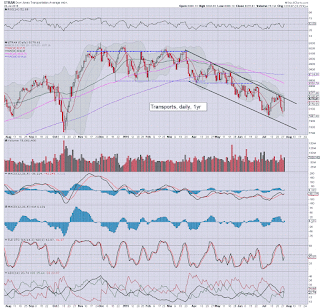