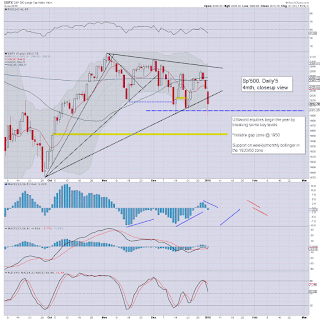 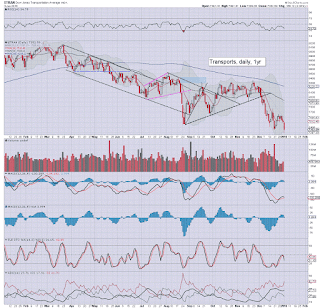 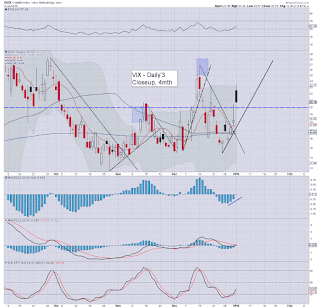 Unquestionably, a daily for the equity bears. Indeed, it was the third consecutive net daily decline for all US indexes. The VIX certainly confirmed the equity weakness, with an important daily close above the key 20 threshold.

A move to sp'1950 looks extremely probable this week, and that would likely equate to VIX 26/27.

The bigger weekly/monthly charts are offering downside to sp'1920/00 in the immediate term. Were that the case, VIX would be in the low 30s.
--

*At 8pm EST I will publish the outlook for 2016, along with YOUR predictions :)
Posted by Trading Sunset at 23:00:00
Email ThisBlogThis!Share to TwitterShare to FacebookShare to Pinterest 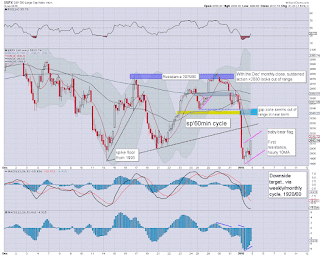 *closing hour action: weakness to 1993, but holding the morning low of 1989, spiking higher into the close, as no doubt some equity bears closed out after a third net daily decline.
--

Clearly, a day for the equity bears, having seen a fair few aspects of support broken under.

I realise some will be calling a floor from 1989, but that makes ZERO sense as a key floor for early January.

-
Highlight of the day... seeing Pisani quoting circuit breaker limits in the early morning. Those cheerleaders on clown finance TV sure get spooked easily.

If the market sees broad weakness in the weeks and months ahead, the mainstream will no doubt start to get real moody with Yellen. Calls for more money printing will soon start appearing.

The 'outlook for 2016' - with YOUR predictions, will appear at 8pm.
Posted by Trading Sunset at 21:01:00
Email ThisBlogThis!Share to TwitterShare to FacebookShare to Pinterest

All US equity indexes are set for a third consecutive net daily decline. With the sp' having broken multiple aspects of support, the door is wide open to an initial washout for the new year to the sp'1920/00 zone. Gold is holding sig' gains of $14, whilst Oil remains weak, -0.5% in the $36s. 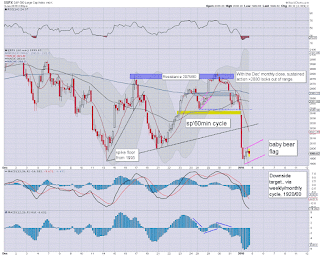 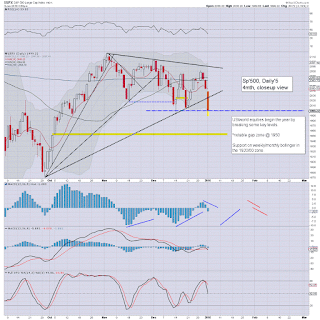 Price structure is likely to become a more refined bear flag by 11am tomorrow. At that point... market will arguably become a valid short again.

*it should be noted that despite the market rallying 16pts from the low, the VIX held most of the gains, and remains +21% in the 22s. The 30s look viable this week.

notable weakness:  FB -3.5%, as even the momo leaders are getting the smack down.

Right now, the market will be liable to get stuck around the hourly 10MA tomorrow @ 2010.
Posted by Trading Sunset at 19:53:00
Email ThisBlogThis!Share to TwitterShare to FacebookShare to Pinterest

US equities have seen a moderate rally from sp'1989 to 2005. There remains further opportunity of upside into Tuesday, but price structure is offering a baby bear flag... with much stronger downside later this week. First soft target remains the sp'1920/00 zone, which should equate to VIX in the low 30s. 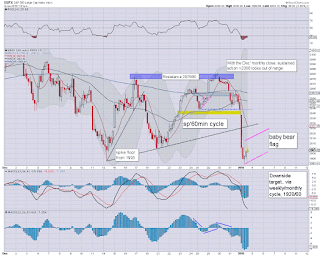 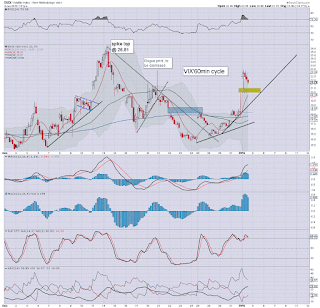 *I am trying not to get lost in the minor noise. Clearly, little bounces are due.... but seen on the bigger weekly/monthly charts (across the world.. not just the US)... the trend IS down.
--

So... its the 2pm hour.. things are churning a bit, and attention will soon start to turn toward how Asia might trade overnight.

I would imagine the communist overlords might have already ordered the PBOC to buy a few things overnight. Considering the technical break <3400 though, unless they are willing to counter every sale... the Shanghai comp' is going to lose 3K this week. 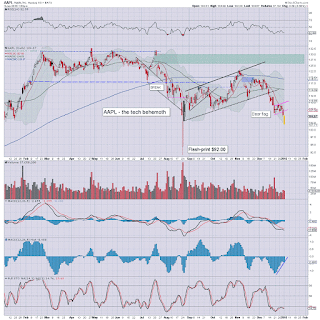 US equities are seeing another attempt to rally, but the damage has been done, with multiple aspects of support already decisively broken. Metals are holding sig' gains, Gold +$15. Oil has seen a strong swing to the downside, currently -0.7% in the $36s. 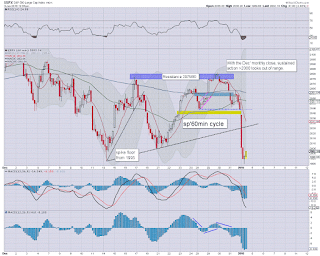 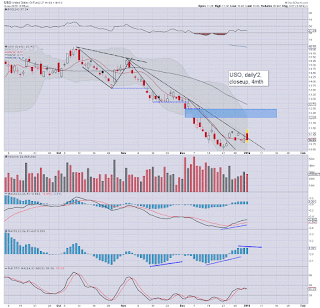 *the downside reversal in Oil sure isn't helping the market mood.
--

VIX is holding almost all of the gains, +21% in the 22s.  VIX sure isn't suggestive equities have seen a multi-day low.
-

--
back at 2pm
Posted by Trading Sunset at 17:57:00
Email ThisBlogThis!Share to TwitterShare to FacebookShare to Pinterest 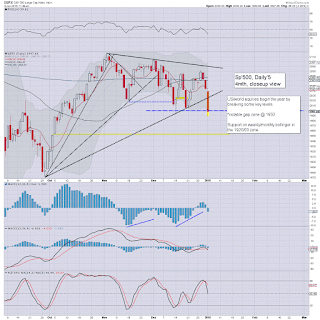 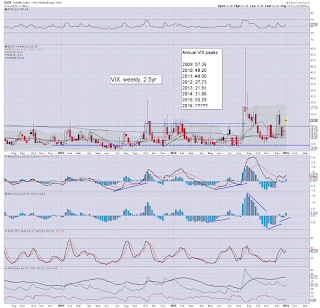 *note the upper bollinger on the VIX weekly cycle, the 30 threshold looks a given, if sp'1920s
--

Getting rather interesting, isn't it?

Not only is this now the ugliest start to a market year since the 1930s, but the technical breaks should be clear to almost anyone.

As noted at the weekend, unless the bulls can re-take the monthly 10MA, with a Jan' close >2060 or so, the default trade is now to the short side.

--
time for lunch :)
Posted by Trading Sunset at 16:51:00
Email ThisBlogThis!Share to TwitterShare to FacebookShare to Pinterest

11am update - the bigger bear flag 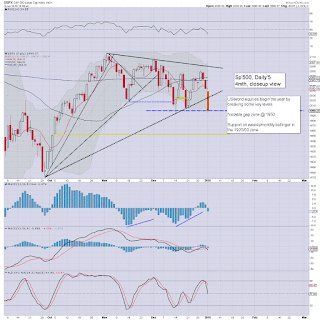 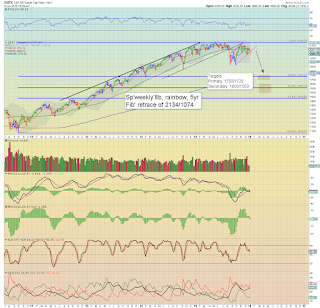 Indeed... just look at the daily chart... a very ugly start to the year.

The bigger weekly cycle was offering a giant bear flag...and we've broken that today. With other world equity markets clearly on the slide, there can be high confidence in the US bear flag.
- 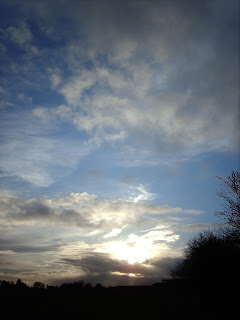 Feels damn cold today... but still.... next to zero chance of snow until late Jan'
--

The first Fed official of the year 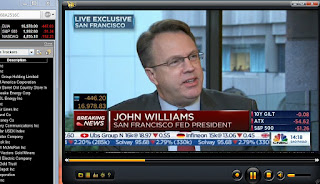 First attempt by PRINT HQ to 'calm the market'. lol
Posted by Trading Sunset at 15:53:00
Email ThisBlogThis!Share to TwitterShare to FacebookShare to Pinterest

10am update - did they halt the market yet?

The equity bull maniacs failed to break an important new high. The bull flag from early Nov' has been negated, as also confirmed via strong declines across other world markets. Regardless of any bounces - of which there will doubtless be, first soft target is the sp'1920/00 zone. 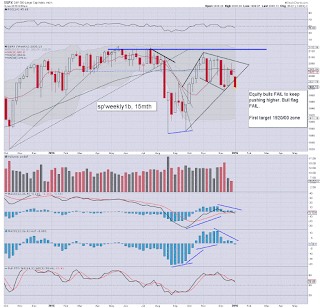 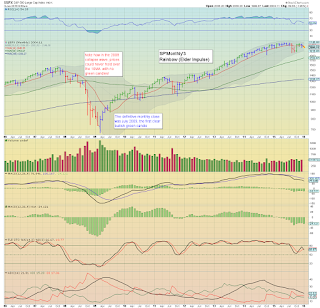 *a new month/year.. and I'm more inclined to highlight some of the bigger cycles today.

There are some HUGE bearish trend changes underway.

re: bounces. Considering other world markets.. a straight run to the low sp'1900s looks possible, if not probable in the near term. Were that the case.. it makes the case for new historic highs extremely difficult, if not impossible for some months.

It is already somewhat amusing to see how the cheerleaders on clown finance TV are getting spooked. Pisani is already talking about circuit breakers. lol

I need at least a little sunshine, back soon

Really, it seems a straight run to the 1920/00 zone. It'll be pretty funny to see how quickly talk will start to turn of the 'rate hike was the worse fed decision ever'.

In any case....  bigger charts tell the real story.
Posted by Trading Sunset at 14:50:00
Email ThisBlogThis!Share to TwitterShare to FacebookShare to Pinterest 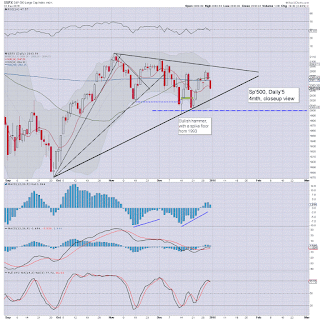 *overnight low so far was around sp -40pts, so we've already come close to losing the 2K threshold.
--

Well, here we go again... and unlike the last 5 years, the market setup is rather bearish indeed. I shall merely refer you to the weekend post for specifics.

--
Update from a borderline permabearish Oscar

As ever... make of that, what you will. I sure don't agree with some of it, but if you're looking for bearish chatter, that should help put you in the mood.
--

With the latest PMI number for china coming in with yet another recessionary sub 50 number, the market had the excuse it needed...

China -6.9% @ 3926, with trading eventually being halted in the afternoon. After all, the communists can't have falling prices, as that would upset the serfs. No doubt new witch hunts will be launched... and some traders/analysts/media will 'disappear'.

AAPL -1.9% in the $103s.  As noted last week, if AAPL is leading the way, it is warning of much lower levels for the broader market in the near term.
-

Below that.. there isn't anything until the lower weekly bol'.. around 1900.

*watching the Cramer... somewhat amusing. The cheerleaders are already wondering about Yellen and rates. How long until they start murmuring QE4 again?
Posted by Trading Sunset at 12:57:00
Email ThisBlogThis!Share to TwitterShare to FacebookShare to Pinterest
Newer Posts Older Posts Home
Subscribe to: Posts (Atom)