Lets take our regular look at five of the main US indexes (monthly candle charts). 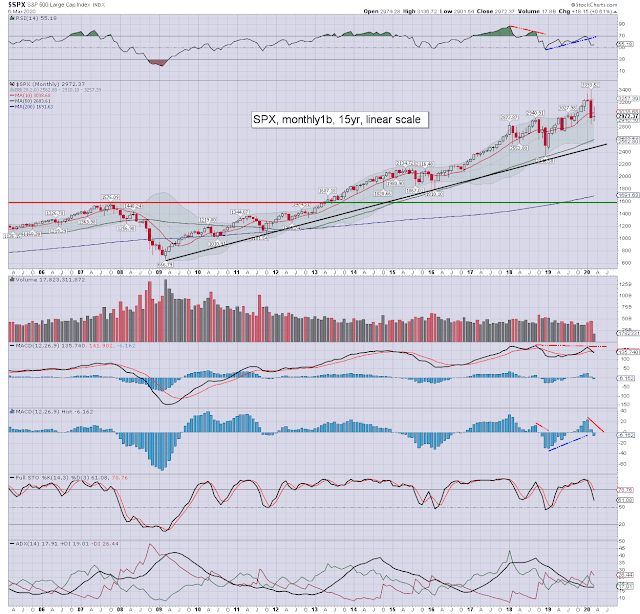 The bearish engulfing February candle was decisive, and offers natural target of the lower bollinger, currently in the mid 2500s. I would note that would still be above the Dec'2018 low of 2346.

Further, note l/t rising trend, which for March, is currently around the 2470s. A break of that trend would capture considerable attention from chartists, many of which are wondering if early 2020 was a key l/t top. For now, there is little reason to believe that.
-- 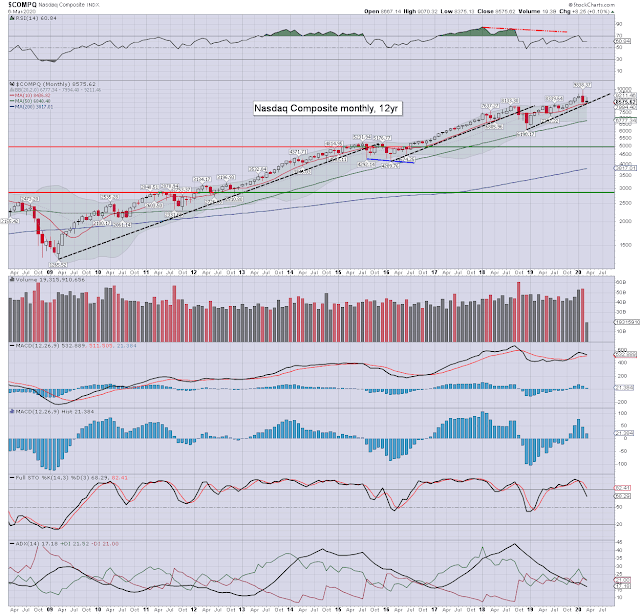 Tech saw a net weekly gain of 8pts (0.1%) to 8575. Its notable that the Nasdaq is the only index of the five highlighted, that is still holding above its key 10MA. 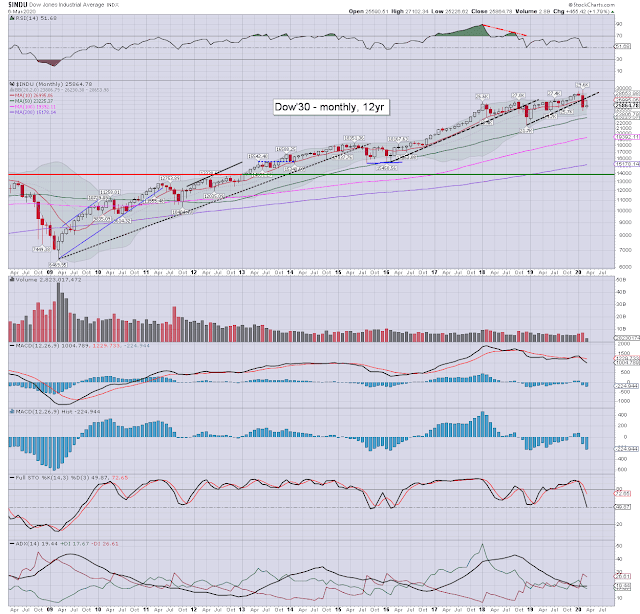 The mighty Dow managed a very significant net weekly gain of 455pts (1.8%) to 25864. Monthly price momentum is now on the moderately low side, as bounces are being sold. Equity bulls should be concerned until another monthly settlement back above the 10MA, currently at 26995, a clear 1000pts higher. 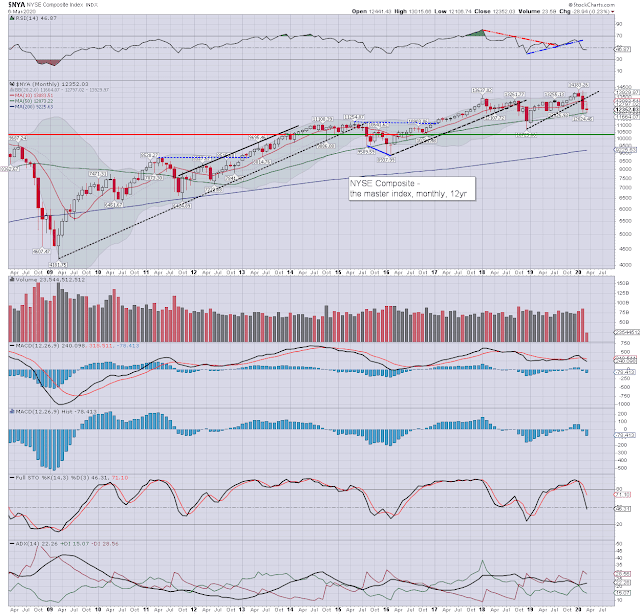 The master index settled -28pts (0.2%) to 12352. Its notable this index maxed out in January, and is currently net lower for a third consecutive month. 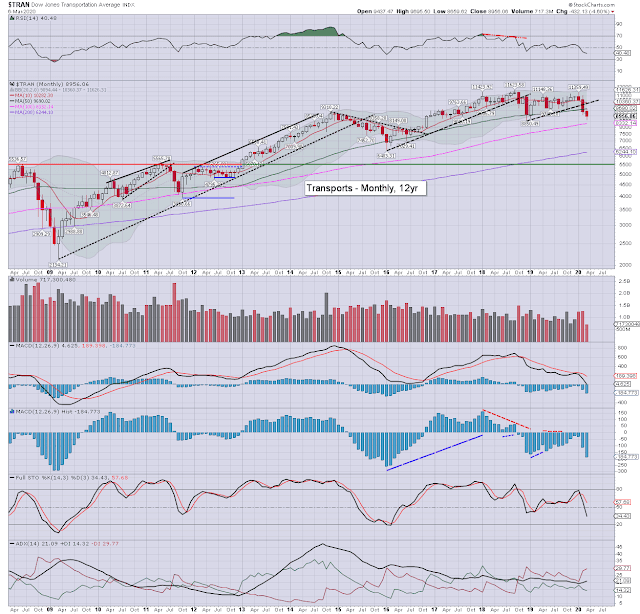 Considering the developing Corona issue, a full retrace back to the 2016 lows - a further 28.5% to the downside, is a high threat within April/May. Key stocks: UAL, AAL, DAL, CCL RCL NCLH.
–

Two equity indexes were net lower for the week, with three net higher.

The Transports was powerfully lower, whilst the Dow was very significantly higher.

Four indexes are currently trading under their respective monthly 10MA, the exception being the Nasdaq comp'.

Key event: Tuesday March 10th will see another six votes to decide the Democrat nominee. With Warren out of the way, it will be interesting to see if Sanders can garner a much better vote against Biden.
https://en.wikipedia.org/wiki/2020_Democratic_Party_presidential_primaries
-

The past week was a truly wild one. We're seeing regular day to day swings of 3-5%, as the US/global equity markets are trying to fathom if Corona is really something to be concerned about. The Fed's emergency rate cut of -50bps to 1.00-1.25% is largely pointless of course. It does mean though that Print Central will be able to say 'we did our part'. Another rate cut appears due by the FOMC of March 18th, and that sure won't help the financials, such as BAC and WFC.

It should be clear, the Corona virus is just getting started in Europe and North America. The next few weeks will increasingly disturb the mainstream cheerleaders, whom believe its just another strain of influenza. Its not, as those aged >75/80 appear at very serious risk. On a positive note, the young appear almost completely immune.

The western economies face a multi-quarter collapse within the travel and entertainment sectors. We've already seen the shippers, airline, and casino stocks get smashed lower. Considering the outlook into end March/early April, those sectors appear set to fall another 30/50%. There is Boeing of course, but that would make for a post in itself. I'll merely note that the $170s appear on track, and it'll be interesting to see how Wall Street views the stock when that target is met.

The broader economy can be expected to be impacted, both in terms of supply side issues, but perhaps more so... demand. Consumer confidence/sentiment could be expected to drop like a rock as Corona cases rapidly increase into the spring.

Here in the UK, the grocery shelves are noticeably starting to empty. The time to prepare has come and gone. Things are about to get 'real interesting' in the land of yours truly, and also across much of North America.

Ohh, and even if there is a moderate viral peak within April/May (that is arguably overly optimistic), a secondary wave of infection could be expected from October onward, and that might be the grander problem for the global economy. Anyway, life within the twilight zone can be expected to become ever more twisted and bizarre. At least its not boring, right?

Have a good weekend
--
*the next post on this page will likely appear 5pm EST on Monday.
Posted by Trading Sunset at 16:47:00
Email ThisBlogThis!Share to TwitterShare to FacebookShare to Pinterest
Newer Posts Older Posts Home
Subscribe to: Posts (Atom)