The VIX closed up almost 11% by the close - much of which occurred in the last hour. The VIX did flash lower at the open - whilst the indexes gaped up 1%, and today marks one of the strongest turns we've seen this year.

The most important aspect of this afternoon though, was the VIX weekly cycle finally moving to a positive MACD cycle. 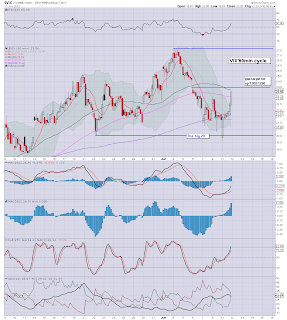 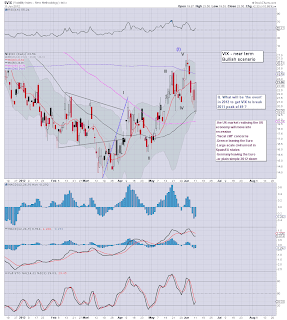 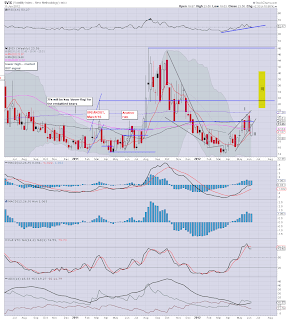 Today's daily candle though is an extremely broad one, a bullish engulfing VIX candle no less. VIX candles are certainly less reliable - primarily due to regular bizarre spikes in both directions, so..even though we did close with a VERY bullish candle, the VIX level still fits within the overall outlook.

Only if the VIX breaks into the 26s, would I consider the market as ready to rollover again and start a major new multi-week downcycle.
--

The VIX weekly cycle - the most important aspect of today.

Look at the MACD (black line)..which closed at 0.041  I've been waiting for this to go +cycle for thirteen weeks..and in the closing hour action it occurred.

Now look at the last time that little black line went +cycle....the VIX went from 17 to 49 within 4 weeks.

THAT is what I am suggesting...and I did note it in my weekend VIX posting anyway.
---

Best guess - when taking into account the index cycles...

Be clear about one thing...I do absolutely believe VIX is set to explode in the next few weeks - with SP' falling into the 1100s. I see today as a mere warning to the bulls that 'bailout talk' won't be enough to hold this market up.
--
More later.
Posted by Trading Sunset at 22:30:00
Email ThisBlogThis!Share to TwitterShare to FacebookShare to Pinterest

Closing Brief - a stinky close for the bulls

A really lousy day for the bulls who must have gone to bed last night delighted with the futures dow +150.

The close of dow -142 is about as strong a reversal as we've seen in many months, maybe since last summer? The VIX closed in a manner that certainly did confirm the index move lower. 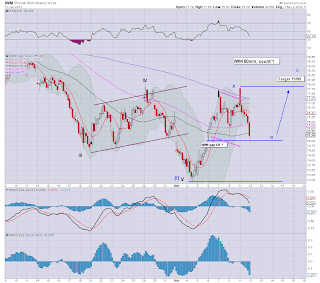 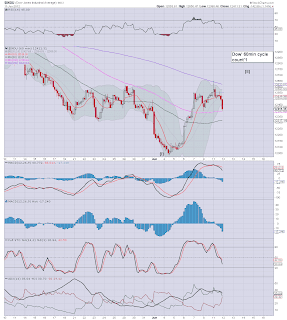 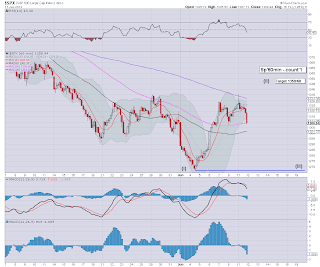 From a MACD (blue bar histogram) cycle perspective, we are pretty low...as noted earlier..any downside would be to around 1300 or so.

I do NOT expect a significant move lower in the days ahead..yet.
--
Primary target remains 1350/60.
Posted by Trading Sunset at 21:08:00
Email ThisBlogThis!Share to TwitterShare to FacebookShare to Pinterest

Today has surely confused just about everyone. This closing hour could easily go either way. That is not to 'sit on the fence' about things, but really, today is a confusing mess.

The VIX is continuing to claw its way higher, but there is nothing impulsive about the move, any bear looking for some kind of major collapse wave (sp<1266) in the next few days..is surely going to be very disappointed. 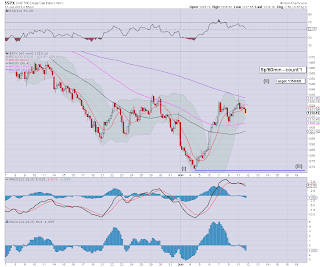 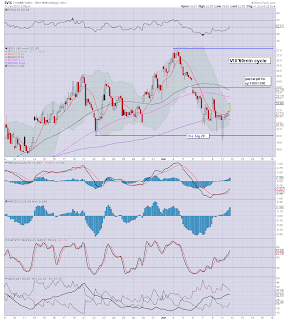 More after the close, with some important updates on the world indexes
Posted by Trading Sunset at 19:57:00
Email ThisBlogThis!Share to TwitterShare to FacebookShare to Pinterest

Its increasingly looking like the hourly index cycles are in a slow process of flooring. There is only moderate confidence in this outlook though, so I'm still sitting it out until primary 1350/60 re-short target is hit.

Regardless, anyone who was chasing this market lower at the open, should have exited this past hour. It is still possible we'll drop lower to 1300/1290 before a final move higher...but this really is a messy Monday. Best left..alone! 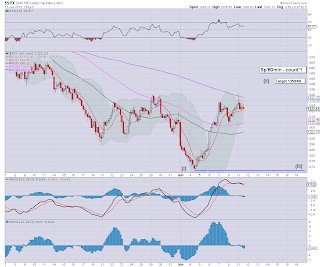 The VIX is trying to claw a little higher, but it looks WEAK, and from a MACD cycle perspective, its always cycled a long way up. This is NOT good for the bears, not good at all.

With still two hours to go, I'm not expecting much change from current levels though.
--

update 2.06pm
Well, VIX just made a new high,..and sp'1318....either that is another shakeout move, or we'll be at 1300 sometime tue/wed. Either way, too unreliable right now to trade.
Posted by Trading Sunset at 18:55:00
Email ThisBlogThis!Share to TwitterShare to FacebookShare to Pinterest

Things remain very confusing on the smaller time frame. Are we going to spend the whole of this week forming a wave'b down to 1300..even 1290? Or will the 60min cycle level out by the end of today, and then further gains Tues/Wednesday...with a fair chance of 1350/60 near the end of the week?

Considering the underlying lunacy of this market, the latter remains a very valid possibility still - not least since the VIX is up a mere 2%

Holding to original overall target of 1350/60..as the prime re-short level. 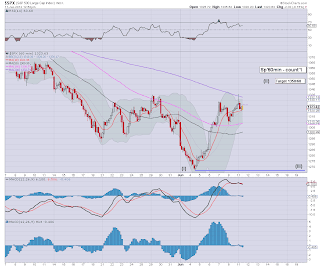 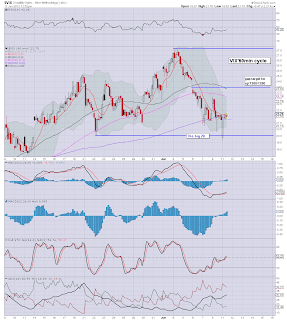 It remains a tricky market...from a permabear viewpoint....

Daily/weekly trend cycle says 'NO!' to shorting yet.
60min cycle is now probably close to levelling out.

Yet..at the same time...a wave'B retrace would probably be around sp'1305/1295..before a C' up to 1350/60s - which might occur as late as next week.
--
So..a bit confusing, and I won't be part of this mess until target level is hit. The one thing I am pretty sure of, 1350s will be a pretty good level to short this weak market.
Posted by Trading Sunset at 17:56:00
Email ThisBlogThis!Share to TwitterShare to FacebookShare to Pinterest

Whilst the market continues to swing all around, confusing just about everyone...the daily cycles will help to keep things in perspective. 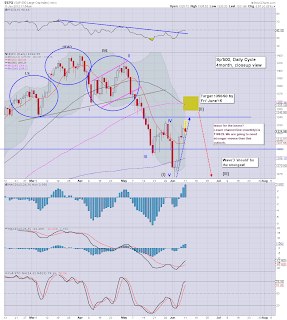 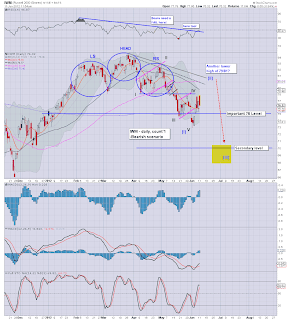 I think most important of all right now - especially for the bears, the VIX is NOT confirming this early fail/move lower in the market.

Primary target remains 1350/60. Until then, I'm sitting this nonsense out.
---
stay tuned!
Posted by Trading Sunset at 16:56:00
Email ThisBlogThis!Share to TwitterShare to FacebookShare to Pinterest

11am update - Mr Market messing around both sides

So the overnight gains completely fizzed away in the opening 30mins - with IWM flashing the first warning with a classic black candle.

Yet, the daily, and weekly cycles have underlying momentum to the upside still. So... bears should stay out of this mess. 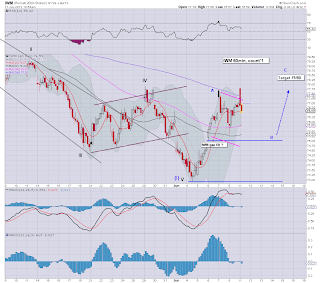 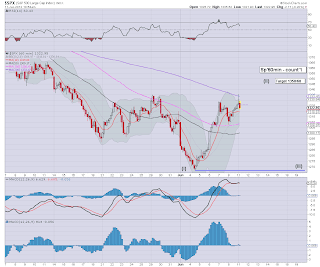 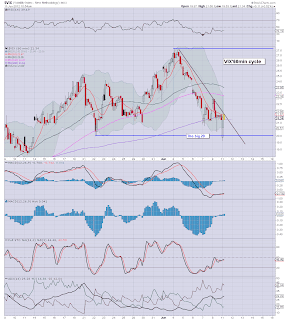 For anyone trying to play the open, this is surely becoming a real confusing mess. From overnight dow +150..and as I type, dow -35.

VIX is NOT confirming any move to the downside this morning, bears should be VERY concerned about that.

I think its best to let those algo-bots battle it out at least until late Tuesday, or early Wednesday.
----
*I'll cover the daily cycles in the next hour maybe, they are ALL still warning of upside to my original target of sp'1350/60.
Posted by Trading Sunset at 15:56:00
Email ThisBlogThis!Share to TwitterShare to FacebookShare to Pinterest

We're now 1% lower or so than the overnight peak. Not exactly a super bullish open anymore. Even the cheer leading maniacs on clown channel appear to realise that the latest bailout plan (and it remains a plan still), is not going to lead to underlying economic growth in Spain. 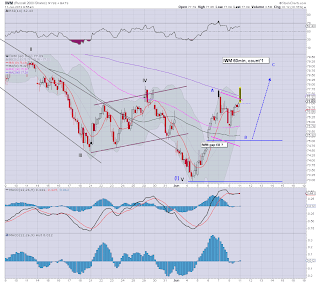 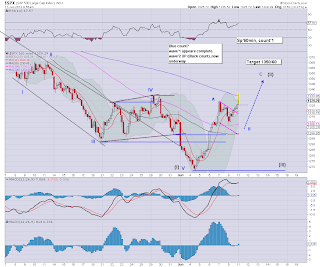 I sure won't be shorting from this level though, given a few hours of shakeout, this market might easily still close up 1% or so, with follow through tomorrow.
--

Better to do nothing.
Posted by Trading Sunset at 14:57:00
Email ThisBlogThis!Share to TwitterShare to FacebookShare to Pinterest

Good morning. Futures are currently showing sp+9pts, so that would be an open around 1334. That is somewhat off the highs of 1341. 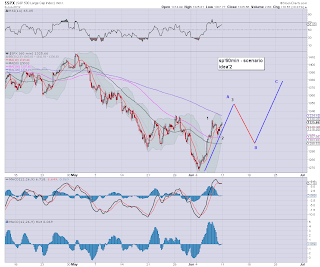 I think it will be fine to re-short in the 1350/60 zone, although that seems not likely to be hit today. The plan remains to short late Tuesday or early Wednesday 1350/60. Certainly, I won't be shorting today, its still too early in price and time.

Good wishes for the week ahead
Posted by Trading Sunset at 13:03:00
Email ThisBlogThis!Share to TwitterShare to FacebookShare to Pinterest
Newer Posts Older Posts Home
Subscribe to: Posts (Atom)