It was a bullish week for all US equity indexes, with net weekly gains ranging from 3.1% (R2K, Trans), 2.3% (NYSE comp'), to 1.6% (sp'500). Near term outlook threatens some cooling to the sp'2030/20s by end month, but even with such an April close, the broader bearish scenario would remain extremely borderline. 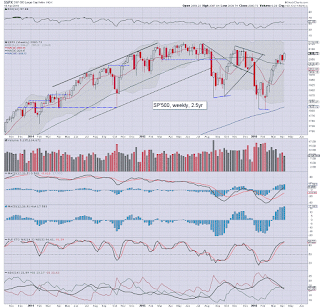 It could be argued this is a sign the market is moving back to the 'crazy times' price action of 2009/08, or is an early bullish sign that the broader market is headed to new historic highs in the coming months.
--

Even if the market does eventually break a lower low (<1810), since we've just broken a new high, some weeks of significant chop is to be expected, before any realistic chance of sustained/significant downside to the 1950/1900 zone.

Any price action in the 1800s looks out of range until late May at the earliest.
-- 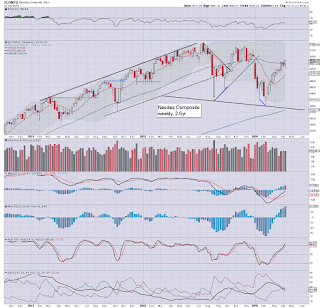 The tech' saw a net weekly gain of 1.8% @ 4938. There are multiple aspects of resistance around the giant psy' level of 5K. By early May, the weekly upper bollinger will be around 5100. 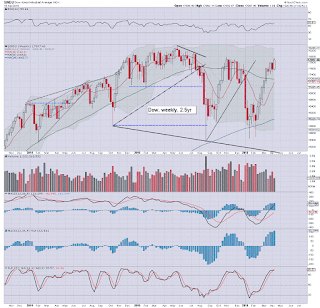 If the bull maniacs can't keep pushing higher, first soft downside is the 17500/400 zone. The 17k threshold has been very important for around 18mths, any sustained price action <17K will open the door to much lower levels for the summer. 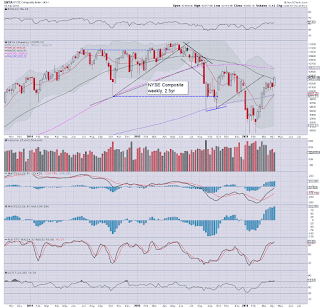 The master index settled +2.3% @ 10355. Next resistance is the 10500/600 zone. Any price action >10700 would be suggestive ALL US indexes will eventually break new historic highs before year end. Equity bears need to see a break back under the 10K threshold to have renewed confidence. 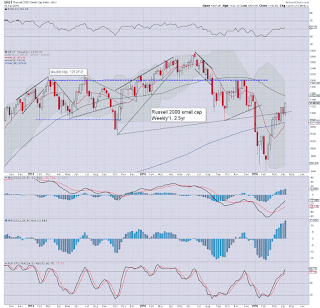 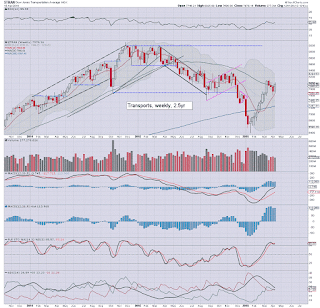 As a collective, US equity indexes are maintaining a broad climb from the Jan/Feb lows.

To have renewed confidence in the broader bearish outlook, equity bears need to see most indexes fall 4-5% just to begin to stall the current rally.

On the flip side, equity bulls could be content to merely see a few more weeks of chop.. before renewed upside in May/June.

Considering the sp'500 and Dow have already come within just 2-3% of new historic highs, it is understandable how many of the bulls are now very confident again. Yet... the equity bulls have been battling to break new highs for almost a full year.

Another failure to break new historic highs should (in theory) result in a much stronger down wave than seen in Aug'2015 or Jan'2016.

Sunday will be important, as a number of the oil producers will have representatives/delegates meeting in Doha. As things are, a significant agreement to freeze (never mind actual cuts) seems doubtful. There will be high potential for a Monday market upset if WTIC Oil implodes back under the $40 threshold.

There is also an important political vote due in Brazil this Sunday, on whether to impeach President Rousseff.
-

*the only scheduled fed officials are on Monday, notably Dudley in early morning.
--

Having broke new multi-month highs of sp'2087 and Dow 17962, the broader bearish scenario remains extremely borderline. Arguably, any price action >Dow 18K and/or sp'2116, will trash any remaining hope that the market is still due another major downward swing into the summer/autumn. 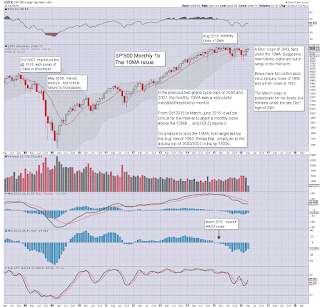 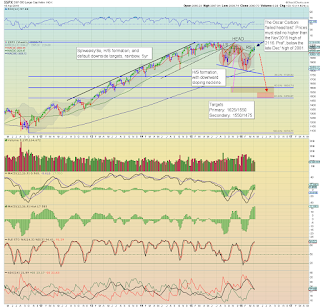 re: monthly1b. Equity bears should be desperate for a monthly close back under the 10MA, currently @ 2021. A monthly close near/at the highs would arguably negate what little remains of the broader bearish scenario.


re: weekly8e: This includes the notion of a 'failed head test' as often touted by Oscar Carboni.

Technically, the scenario is valid so long as the market does not break AND hold above the head - aka.. the high from November - Dow 17977 and sp'2116.

Considering the Dow was 17962 on Thursday... we've already come close to one of the very last tolerable short-stop levels.
--

I would agree the ongoing broad strength in the precious metals (along with related miners) is an indirect signal that the equity market is still vulnerable to renewed downside.

US equity indexes closed moderately mixed, sp -2pts @ 2080. The two leaders - Trans/R2K, settled u/c and +0.2% respectively. Near term outlook offers 2065/61 gap zone on Monday. Equity bears should be battling for a break of soft rising trend.. which by the Wed' close will be around 2057. 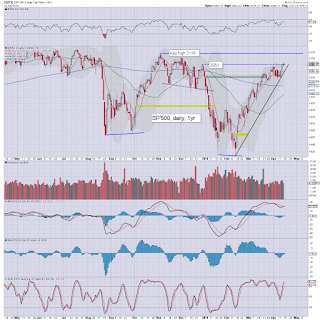 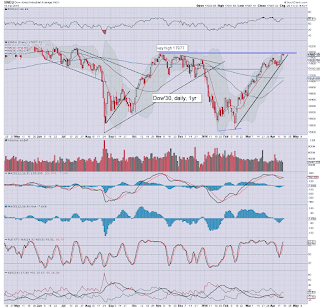 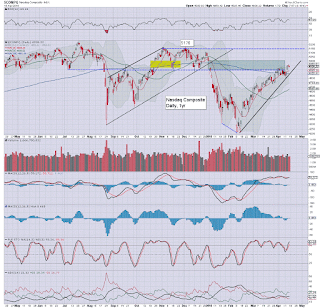 Nasdaq: a second day of chop, but managing a weekly close within the important gap zone of the 4900s.
--