World equity indexes continue to broadly climb, in a strong wave that began in early summer. The US, German, Japanese, and Chinese markets were especially strong in November, with gains of around 3-4%. Outlook into spring 2014 remains bullish, with a further 10/20% of upside. 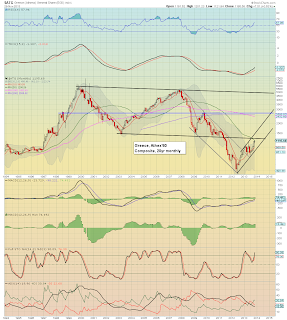 The economy of Greece has long since collapsed, but its equity market is managing to hold the gains of the summer. A month or two of chop seems likely, before renewed upside into late spring. Next key resistance is in the 1300s. A monthly close in the 1400s should confirm the Athex will 'broadly' climb to around 2500..even 4000, by late 2015/early 2016. 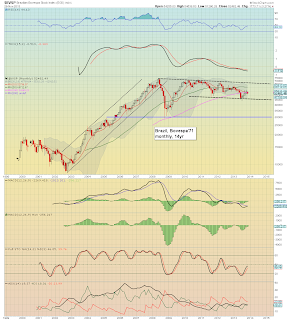 The Bovespa slipped -3.3% in November, but it is still comfortably above the summer lows - which had briefly opened the door to more severe downside. Baring a break under the big 50k psy' level, next upside target is 60k, which seems viable by late spring. 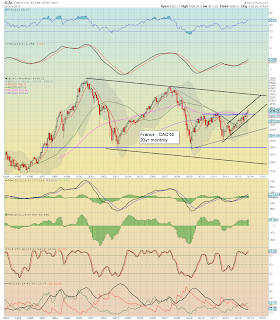 The CAC was fractionally lower on the month, but all things considered, it is doing well to hold the strong gains of 2013. Upside to 4750/5000 looks viable by early next summer. 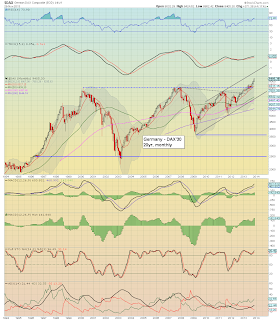 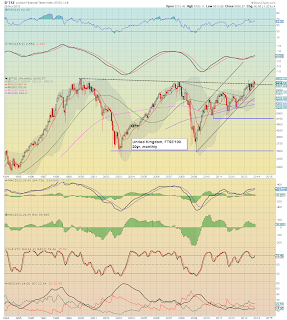 The UK economy is struggling, and this is indeed reflected in the FTSE which - unlike Germany and the USA, is stuck around the old declining resistance. Even so, the UK market looks set for higher levels into the spring. The next obvious target is the historic high of 6950 - that dates back to Jan'2000. That is only 4-5% higher..and looks likely to be tested within the next few months. 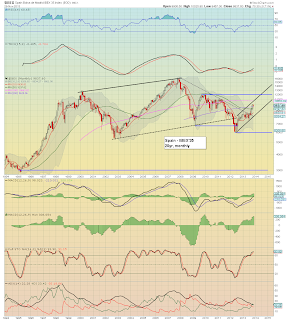 The ugly EU PIIGS member - that is the IBEX, declined slightly in November, but off the lows, and looks set for higher levels in 2014. First target is the 12000 price cluster zone from late 2009/10. That is a good 22% higher than current levels. 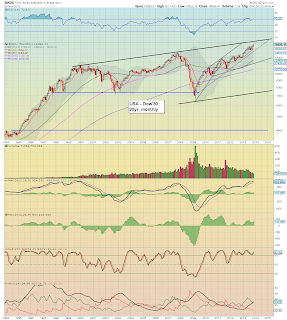 The Dow itself has been one of the more laggy of the US indexes, but it has decisively broken up and out of a six month trading range - arguably a giant bull flag, and looks set for 17000/500 by late spring. With continued QE from the Fed, there is very little preventing the US markets from continuing to broadly rally.

Equity bears should keep in mind that the Dow could fall 1000pts, and it still wouldn't break the broader upward support from Feb' 2009 (note, that line cuts off the March floor-spike, and links up better, forming a more conservative support/trend). 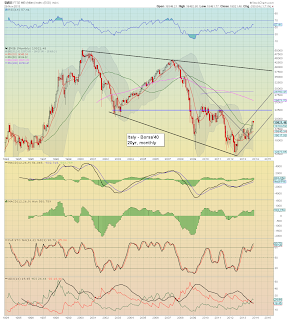 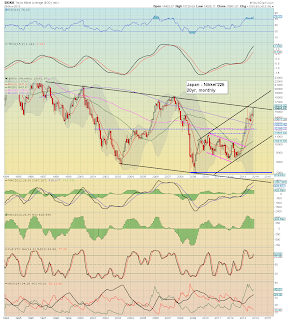 The Nikkei is unquestionably very much like the US Dow, literally 'fuelled by QE'. The Nikkei looks set to close the year in the 16000s, and that will break a declining trend that goes back TWO DECADES. 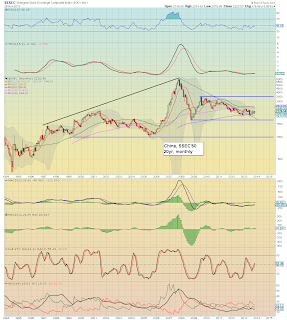 The China market has badly lagged..and indeed failed, to be party to the global equity ramp since 2009. Indeed, the Shanghai Comp' is still 60% lower since the 2007 peak. However, for November, the index gained an important 3.7%, and now looks set for another attempt to hold the 2500s.

Certainly, some of the world markets are tired after the very significant post summer ramp. Yet, with the economic leaders of the USA, Germany, and Japan all posting strong gains, it is likely that the weaker markets will at least 'hold together'..before they too jump higher across the first half of 2014.

More than anything, look to the Nikkei, for that year end close in the 16000s. It will be a powerful sign that the bull maniacs have another 4-6 months of upside yet to come.

Yes, there will be minor retracments along the way - not least with the US debt ceiling/budgetary issues in Jan/Feb, but broadly..the bigger trend should very much remain to the upside.

Next week should be kinda interesting. We have ISM manu' and construction data on Monday. Tuesday has store sales data, although no doubt..there will be a lot of news reports about weekend retail sales on Monday.

The week concludes with the big monthly jobs number.  Keep in mind, there are a few Fed officials on the loose on Thur/Friday, and their comments will likely move the market one way..or another.

It is a somewhat scary thought to realise that there are just 21 trading days left of 2013. For the remaining 'doomer bears' out there, it has without question, turned out to be the worse case scenario. A hyper-ramp, now 25 months in duration, with a probable further 4-6 months yet to go.

I will be here for the next big intermediate top next spring, I sincerely hope you are too!

Another week.. and month of gains

Despite a touch of weakness in the closing hour, it was another weekly, and net monthly gain for the US equity indexes. Primary trend remains outright bullish, with upside to Dow 17000/500 by late spring 2014. The equity bears have another 4-6 months to wait. 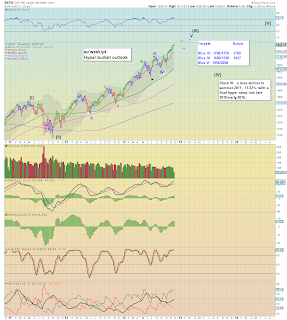 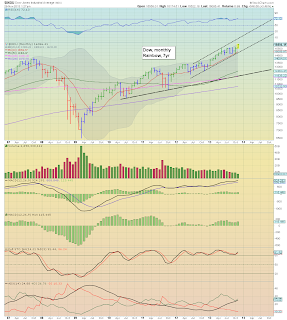 Unquestionably, the US (and world) indexes are outright bullish on the short, mid, and long term cycles.
-

Santa is coming..and no doubt, there will be 'green shoots' in early 2014.

Yes..there are the debt ceiling/budgetary issues for Jan/Feb...and indeed, I'd guess there will be a minor 4-6% pull back at that time, but then, another ramp into April/May. Best guess remains..an intermediate top next spring, and then a few months of significant downside..on the order of 17/22%.