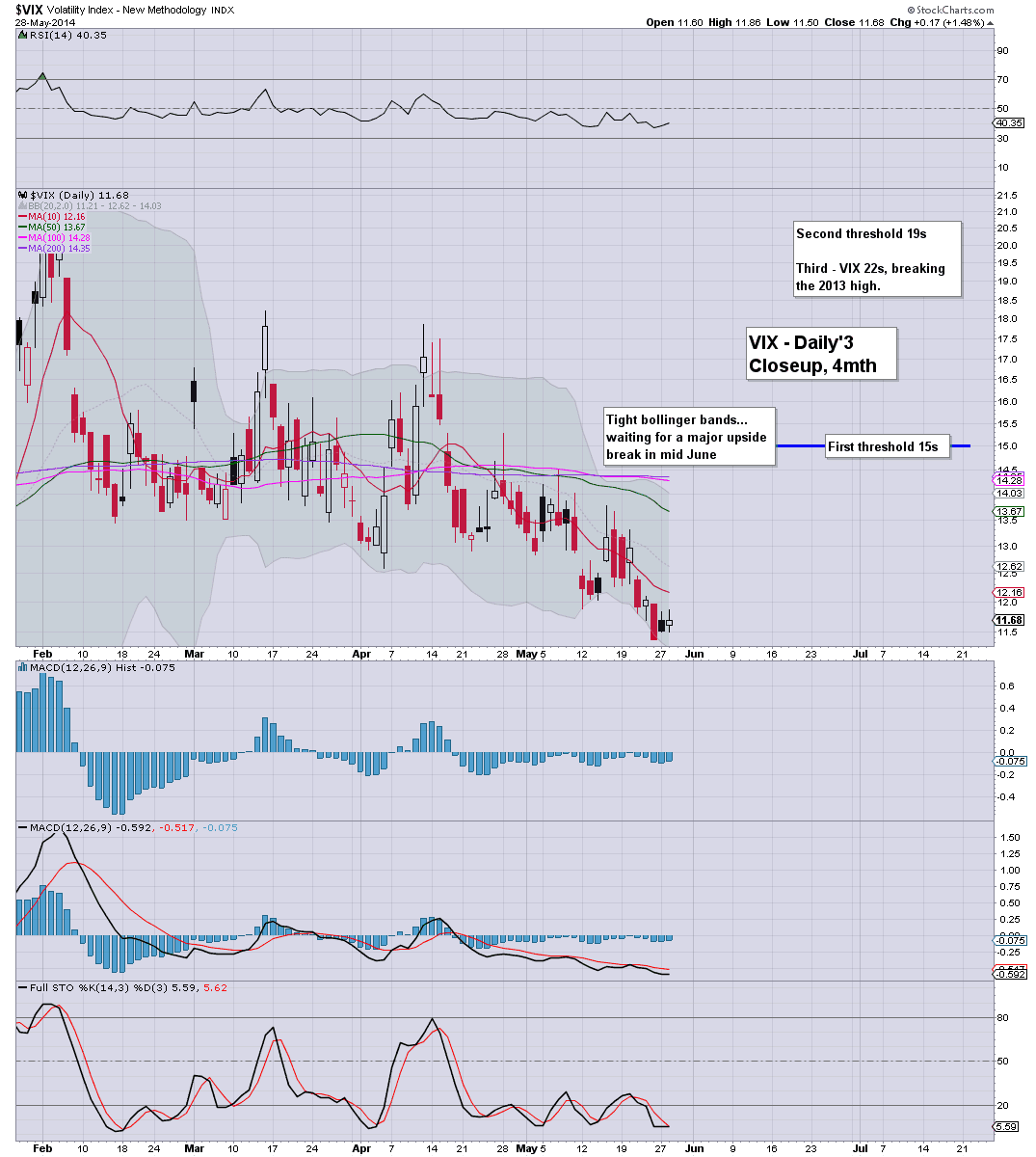 VIX is in micro chop mode..and looks set to remain low for at least another 2-3 weeks.

*I have zero intention of picking up a VIX call block until mid June,
--

US equities closed somewhat subdued, sp -2pts @ 1909. There were new historic highs for the Trans/SP'500 of 8102 and 1914 respectively. Near term outlook still offers a minor retrace - if on the excuse of 'weak' GDP. 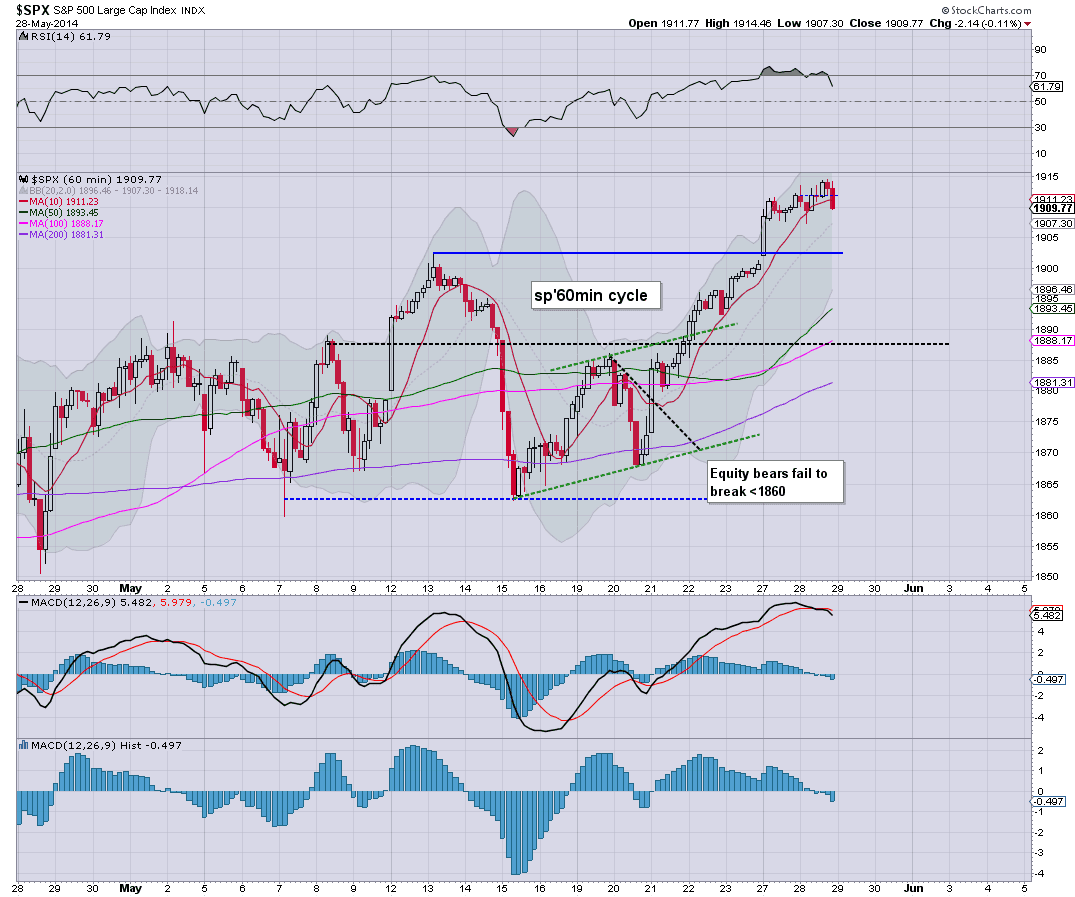 *fractional weakness into the close, maybe a few were cashing out ahead of tomorrows GDP (second) reading.
--

It was just another day in market land. New highs for the 'old leader', and even though there was some moderate weakness in the R2K across the day, the retrace was very minor - considering the recent gains of almost 6%.

Bigger picture remains the same...multi-week up wave from sp'1814..just keeps on going.
--

*I remain on the sidelines, with zero intention of picking up any shorts for probably some weeks.
--

more later..on the VIX
Posted by Trading Sunset at 21:00:00
Email ThisBlogThis!Share to TwitterShare to FacebookShare to Pinterest

US equities look set to trade quietly into the close. For some indexes, it will be the fifth day of consecutive gains, the rest...merely a touch lower. Notable strength in the Transports @ 8096. Metals remain weak, Gold -$7. VIX looks set for another close in the 11s. 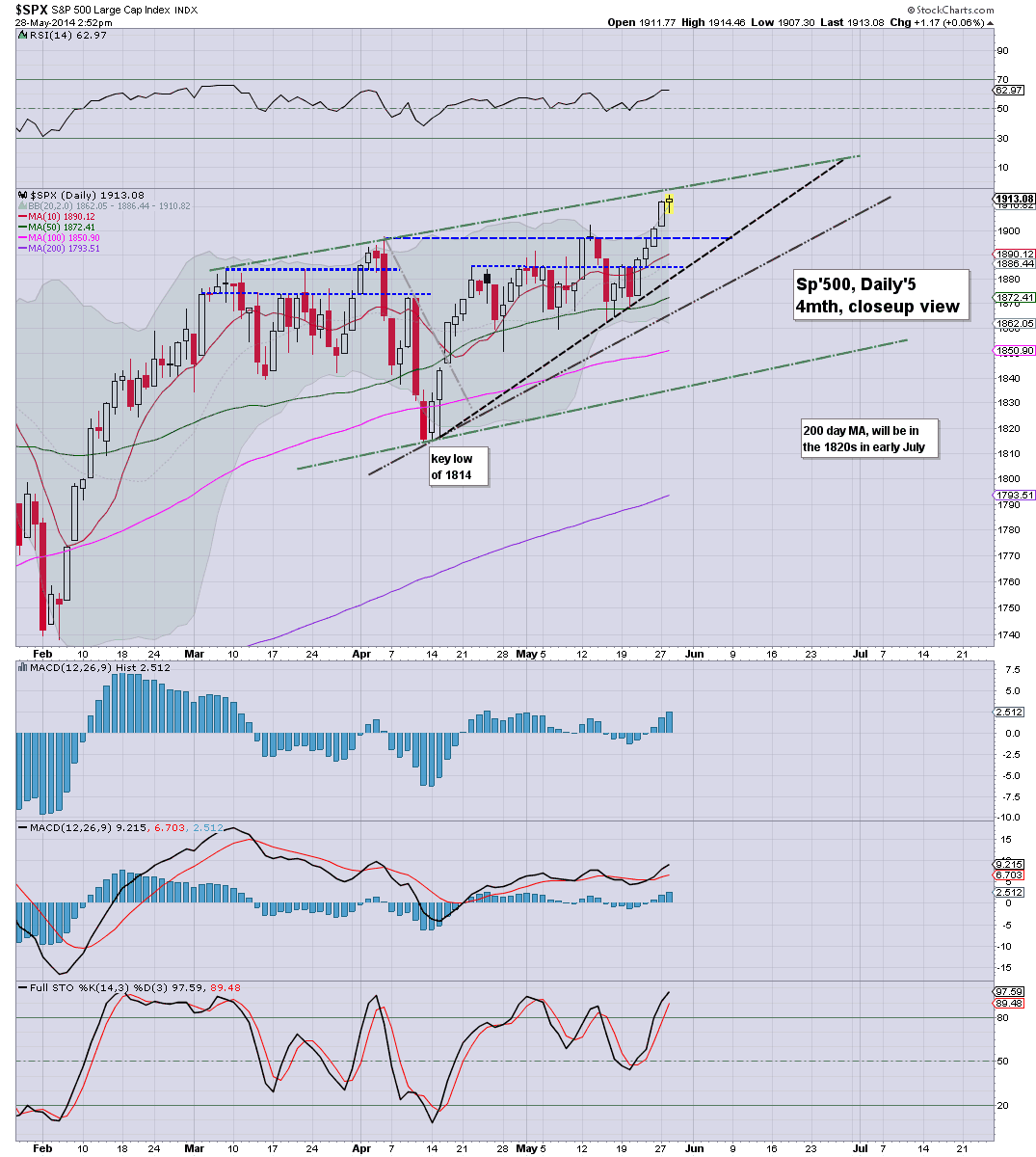 Sure, the daily charts are getting a little stretched, but hey...there is QE-pomo tomorrow of $3bn or so....and that will be enough to at least keep the sp'1900s into the weekend.
- 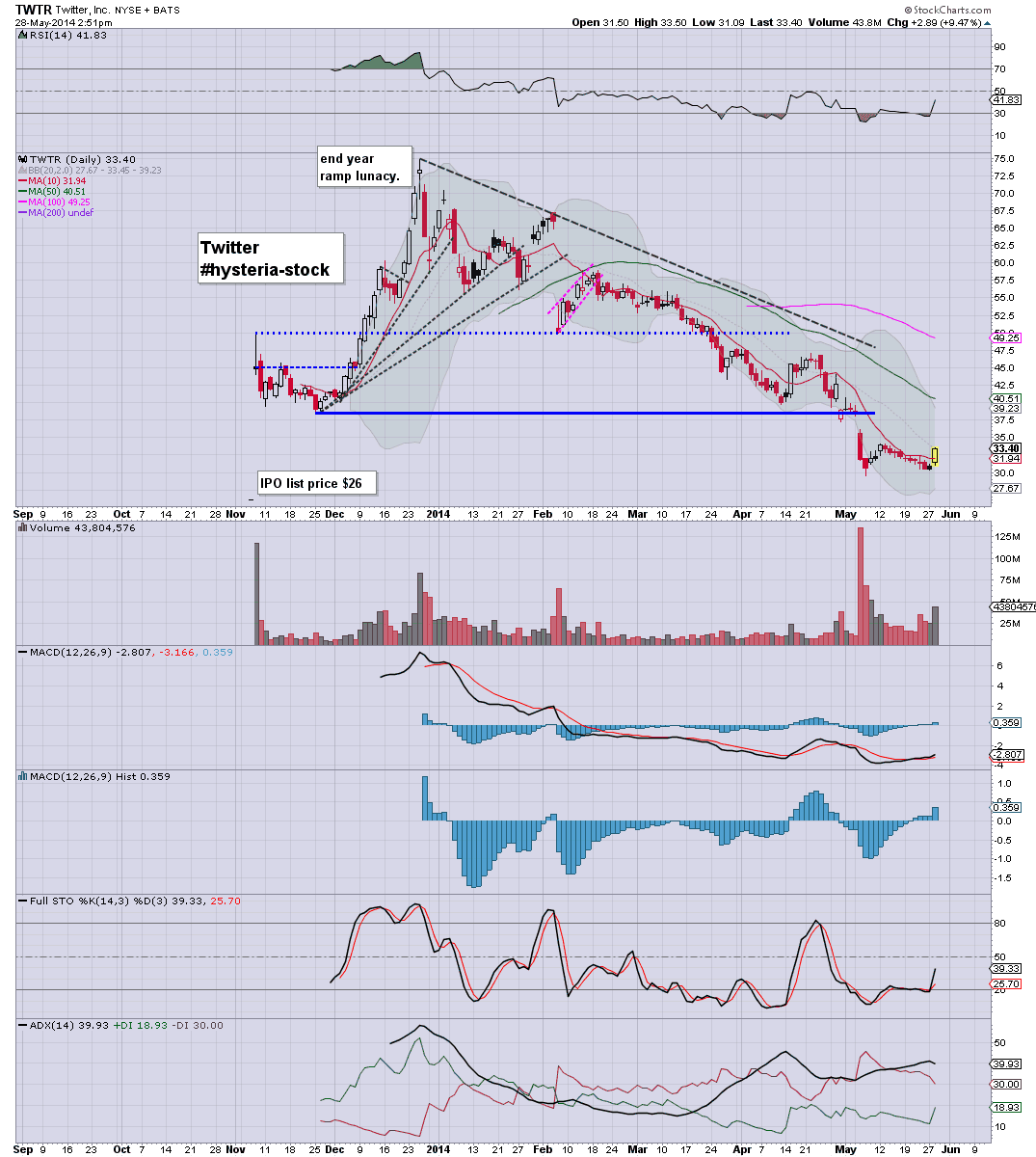 VIX in danger of closing red..although in the scheme of things, VIX is now meaningless at these levels.
Posted by Trading Sunset at 19:53:00
Email ThisBlogThis!Share to TwitterShare to FacebookShare to Pinterest

The underlying upward pressure is probably starting to surprise even the most bullish of bull maniacs. Weekly charts are offering the sp'1920/25 zone next week, which should equate to VIX 10s. Metals continue to struggle, Gold -$5 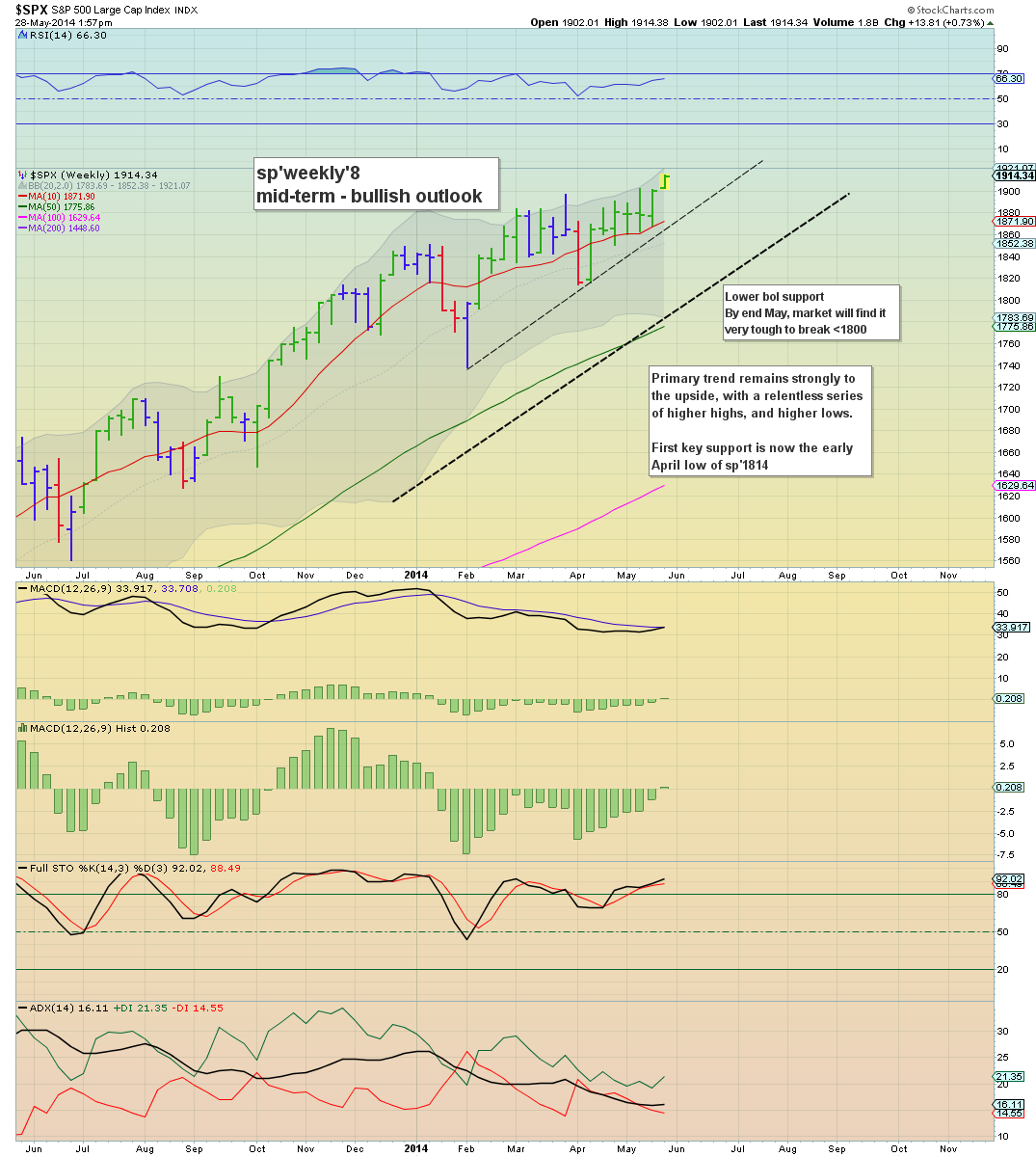 Even the upside is starting to surprise me, although there remains weakness in the R2K
--
Posted by Trading Sunset at 18:57:00
Email ThisBlogThis!Share to TwitterShare to FacebookShare to Pinterest

The broader market is largely flat, but there is some distinct cooling down in various stocks, as especially reflected in the R2K, -0.7%, but still a full 45pts above the critical floor of 1080. Metals remain weak, Gold -$6, although there is threat of a minor bounce into tomorrow. 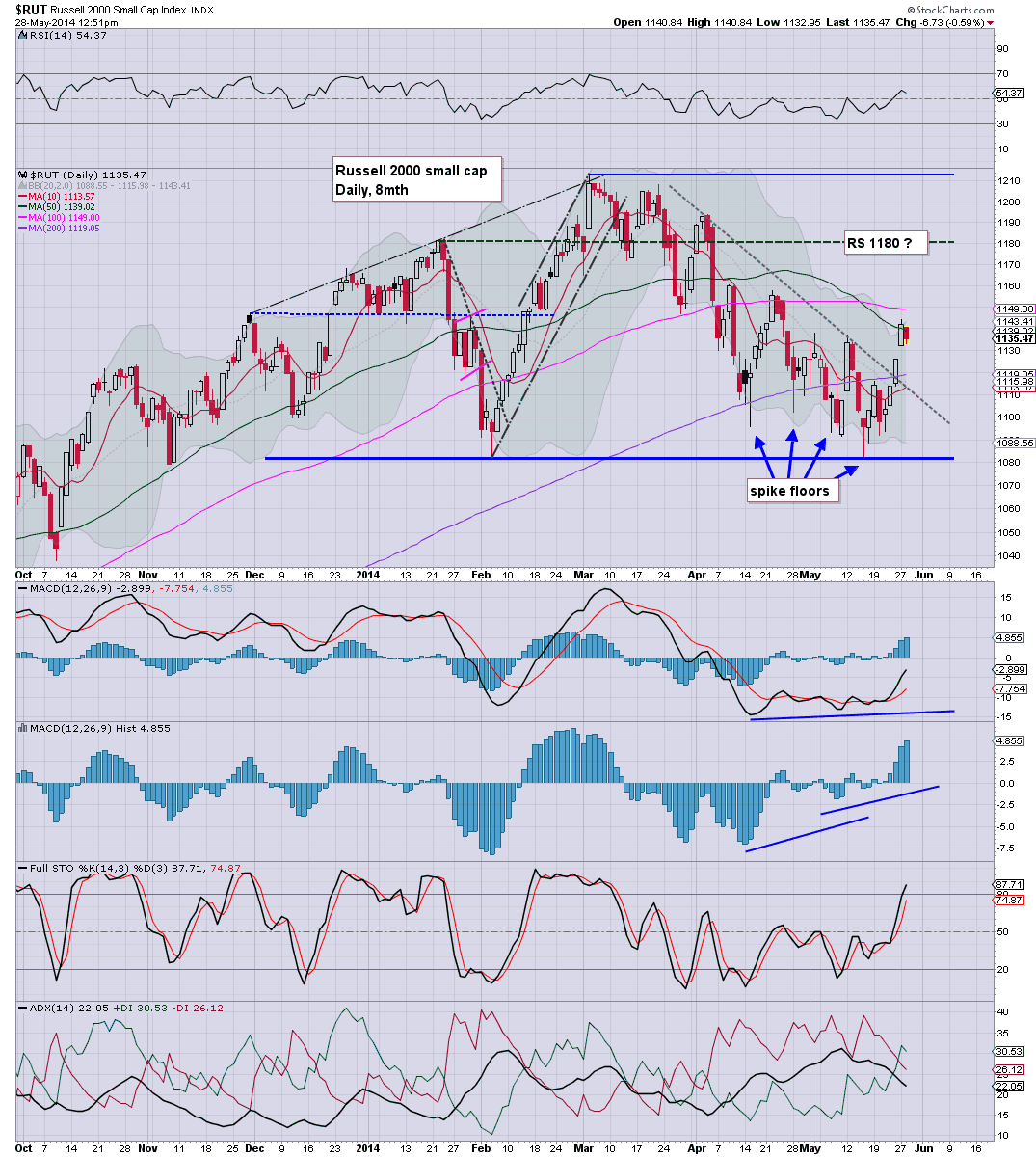 It remains a difficult time for many on the bearish side, even those who are refraining from launching any new positions.

For me, I'm content to do nothing. If the market drops significantly tomorrow morning on the 'scary' GDP data...I might buy into that though.

Upside for R2K looks to be at least 1170/80..and that is a good 2.5% higher.
-
Posted by Trading Sunset at 17:52:00
Email ThisBlogThis!Share to TwitterShare to FacebookShare to Pinterest

12pm update - even the retracements are minor

Equity bears are unable to even claw to the sp'1900 threshold (well, at least today), and the market is breaking new historic highs in the Trans and sp'500. Precious metals remain very weak, with Gold set to fall a further $50 into early June. 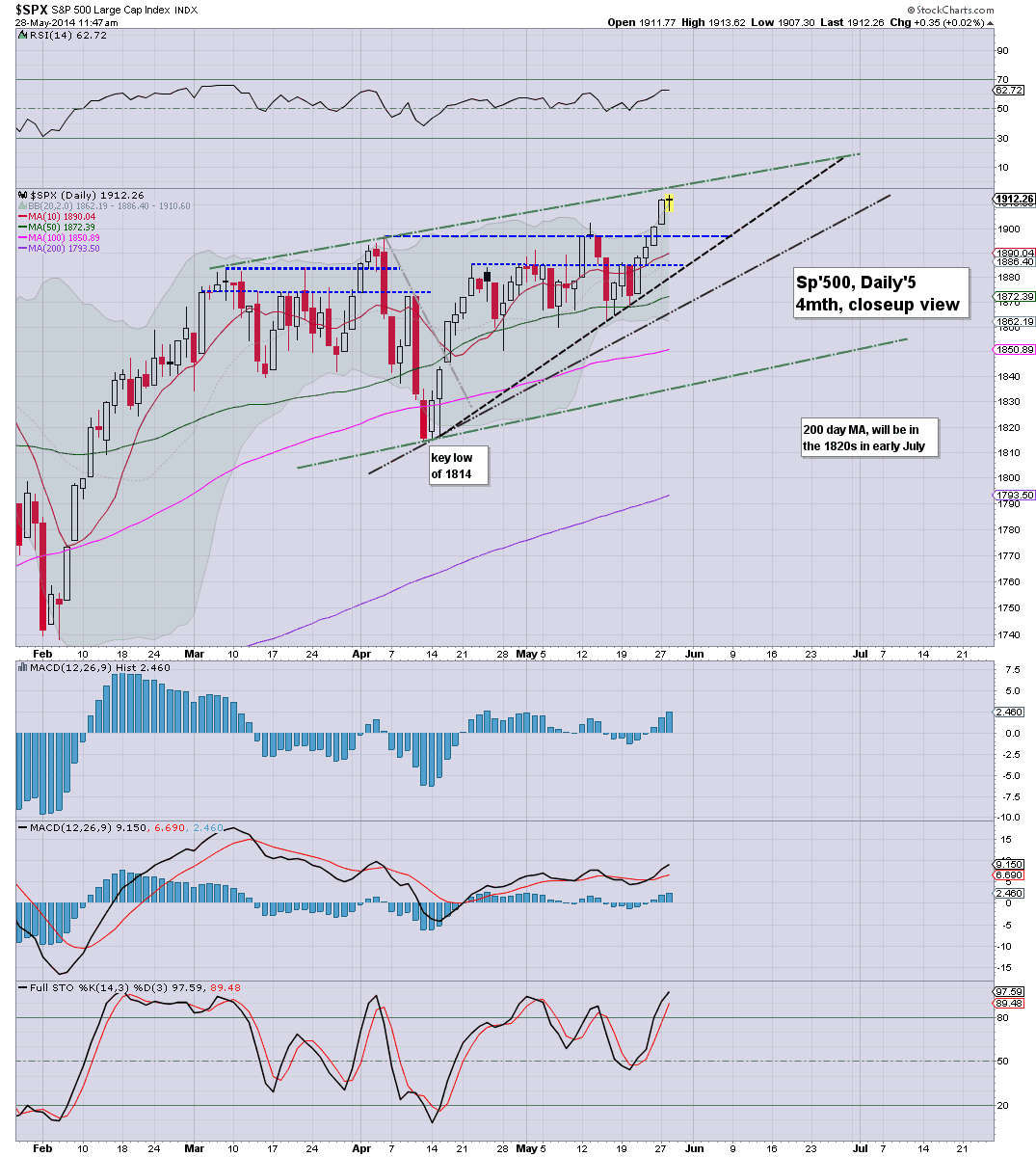 I realise some will be wanting to short here, but really...why?

How can it be a valid short whilst the weekly/monthly charts are still outright bullish? What about the Transports, which could be in the 8100s tomorrow?

-
time to shop
Posted by Trading Sunset at 16:48:00
Email ThisBlogThis!Share to TwitterShare to FacebookShare to Pinterest

Equities are seeing just a touch of weakness, but which is a natural retracement of the recent gains. There is a gap around sp'1900 that just about everyone should be aware of. Market will have a high chance of closing May at/above the 1900s. Metals continue to slide, Gold -$7 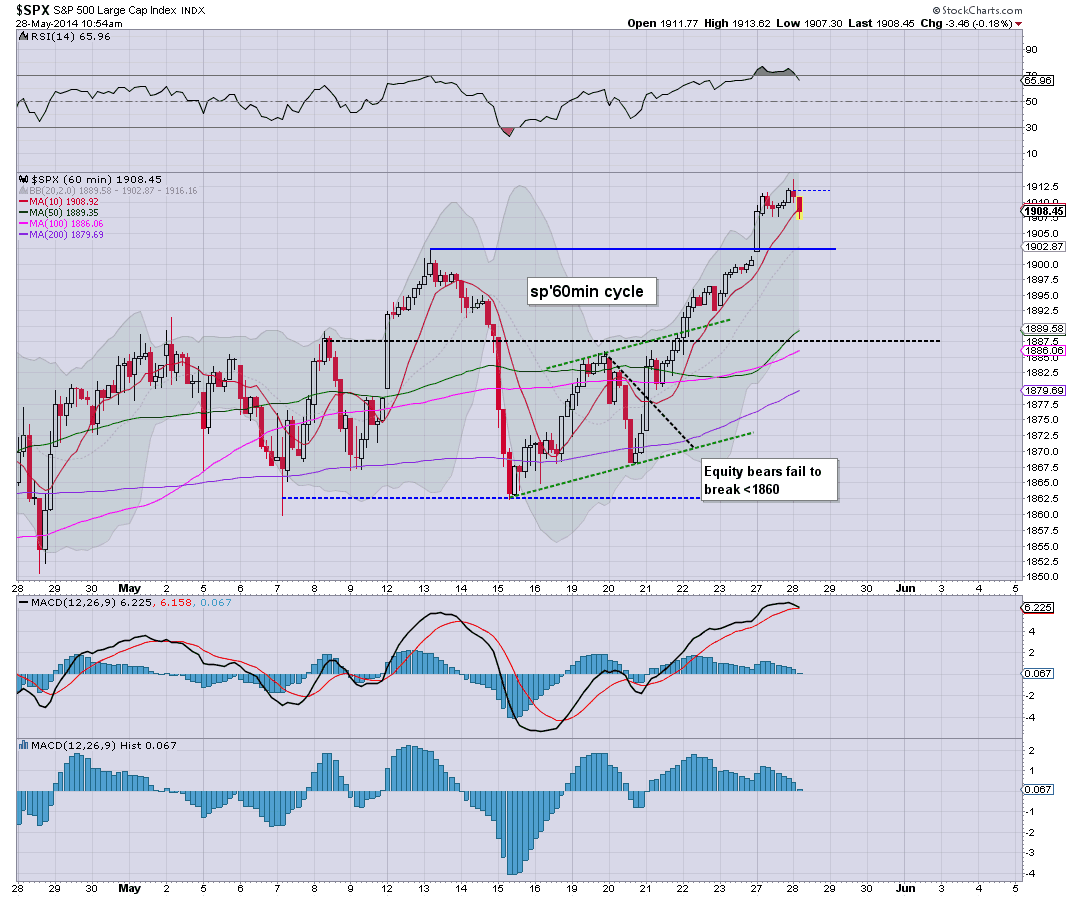 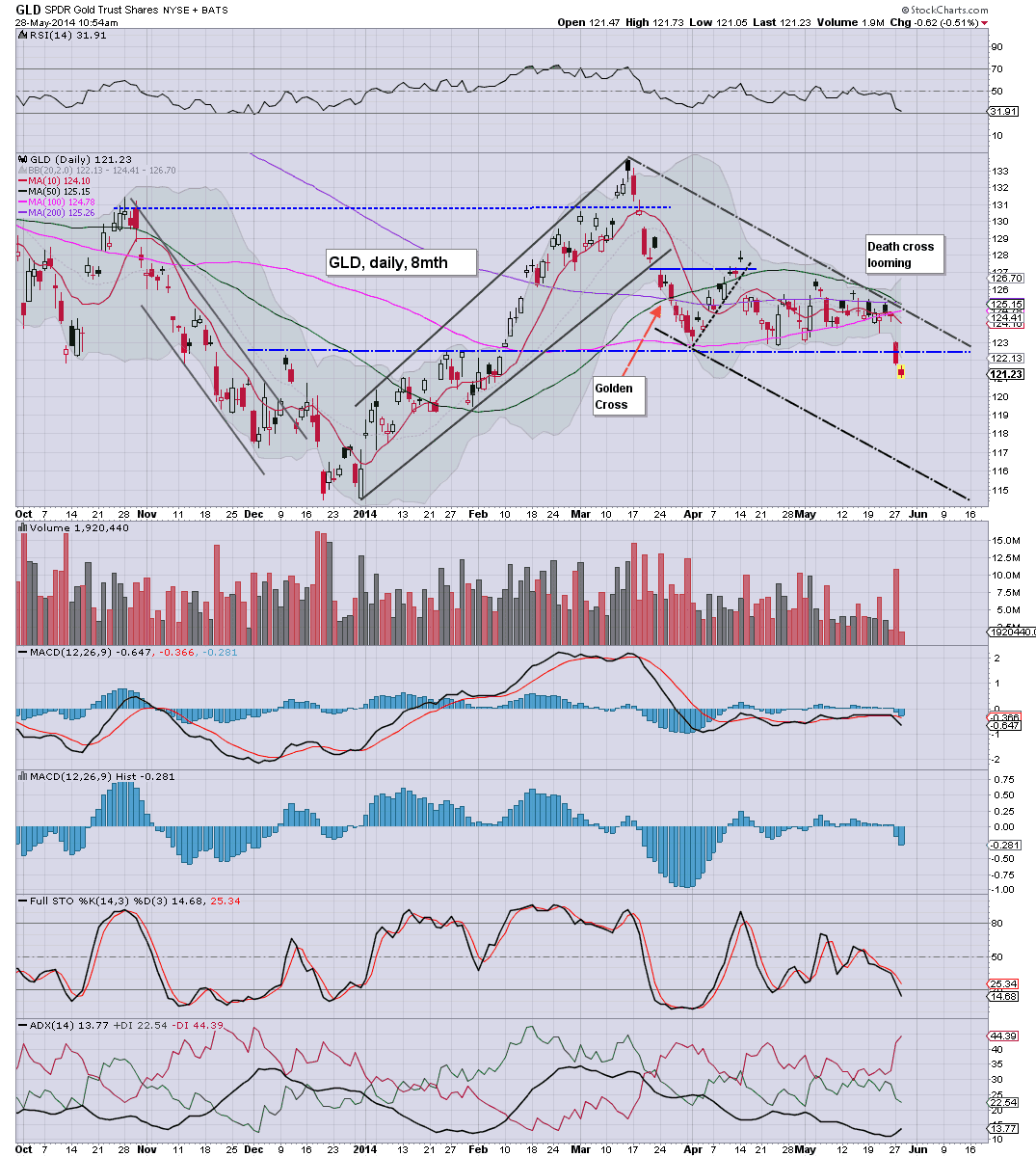 The action in the metals is certainly more interesting than equities. With Gold breaking support yesterday..there is nothing but empty air below.

Perhaps that will be enough to fully capitulate most of the remaining doomer bears.
-

Notable weakness: drillers...declines are building in DO, RIG, SDRL The weekly charts are starting to look suspect, esp' DO (Diamond)
Posted by Trading Sunset at 15:56:00
Email ThisBlogThis!Share to TwitterShare to FacebookShare to Pinterest

10am update - just another day

US equities open with minor chop, although the sp'500 has already fractionally broken another new historic high of 1913. Precious metals remain weak, and with Gold below key support, there is plenty more downside ahead. 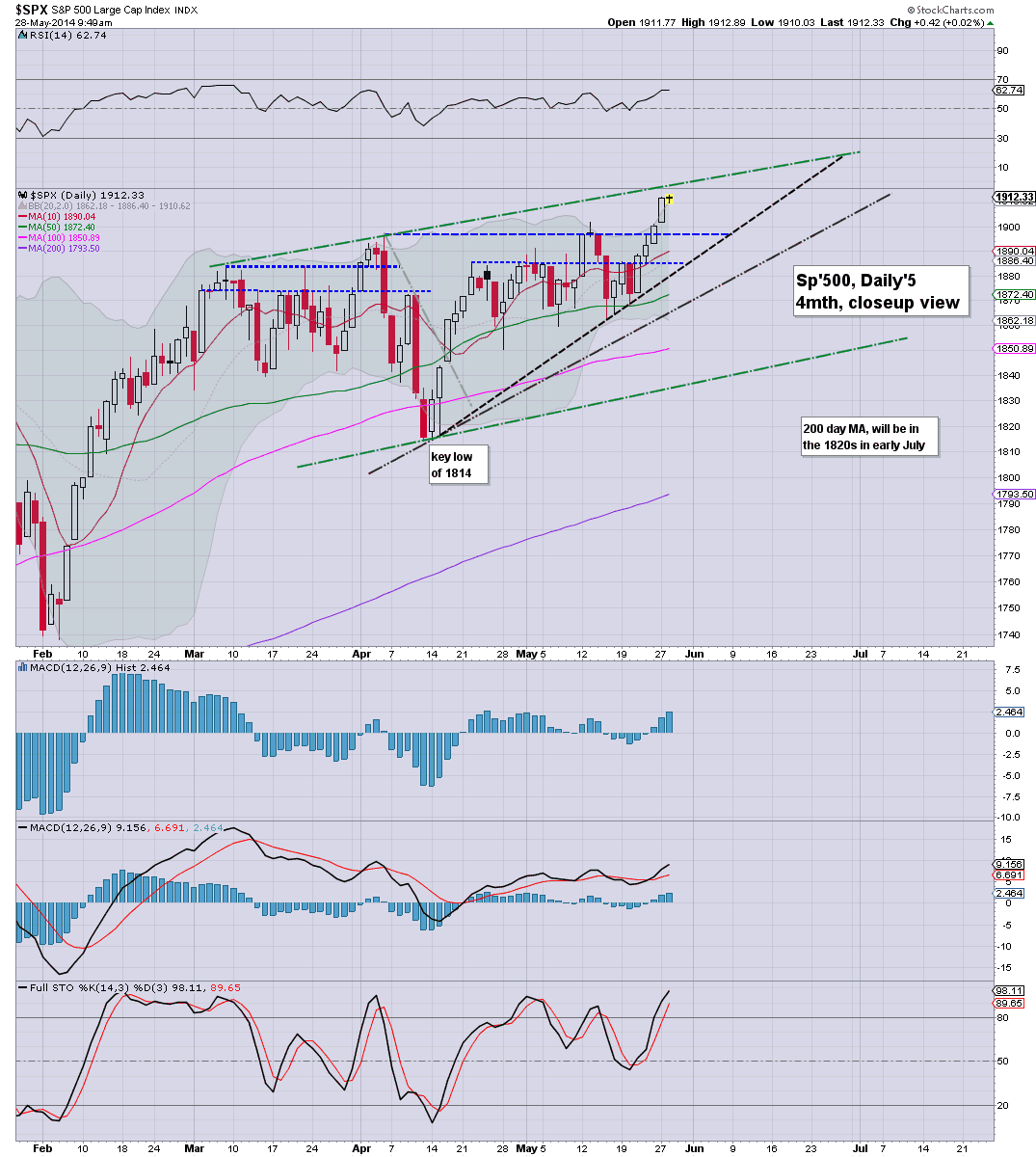 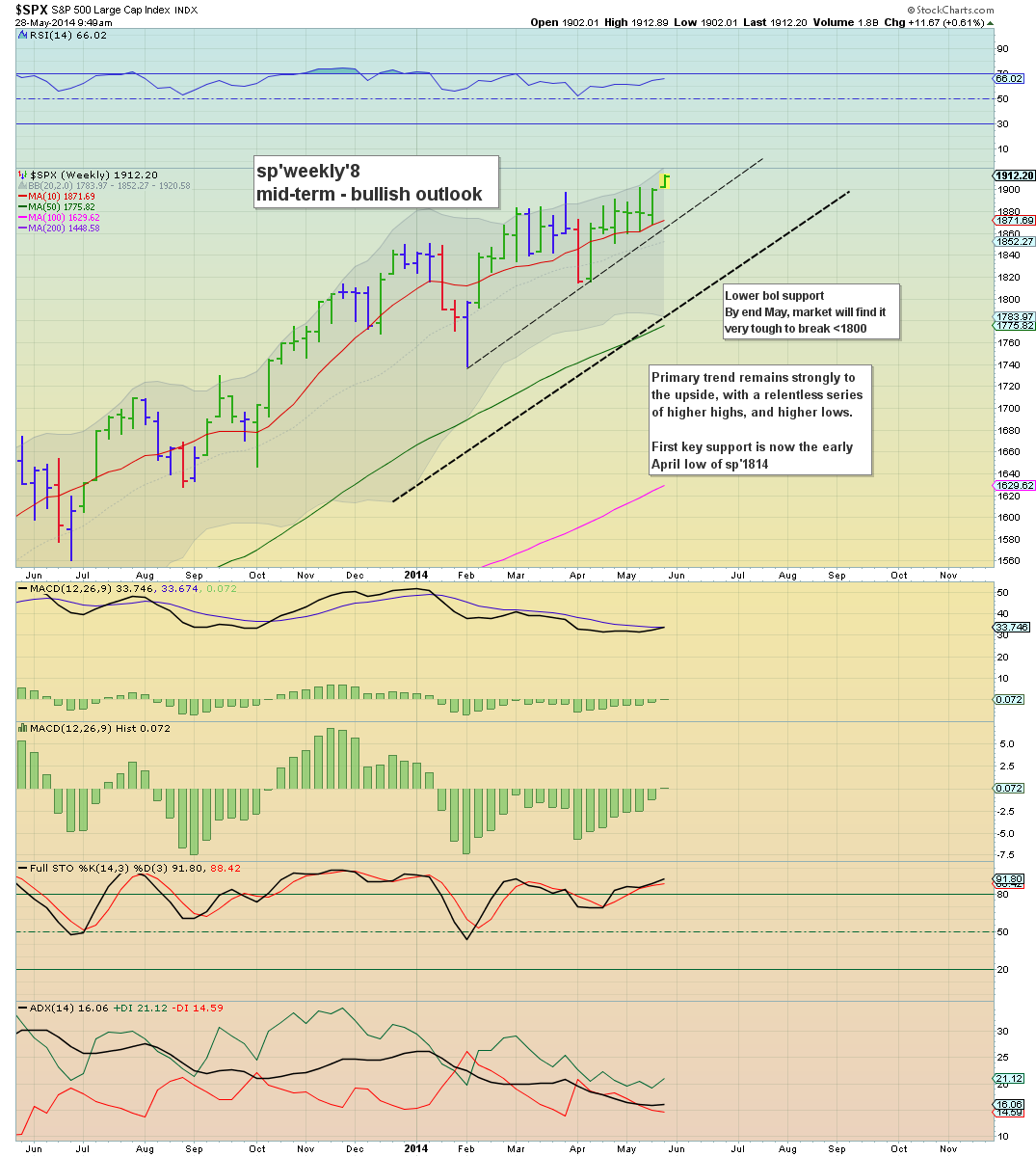 No doubt..a fair few will be launching index shorts at these levels.

Good luck with that though. Such traders are shorting into weekly/monthly cycles that continue to push higher, with a VIX that reflects a market that has zero concern about anything into the summer.

With another sig' QE-pomo due tomorrow, the month is set to end on a largely positive note. Even if GDP revised comes in negative, it won't particularly matter, since the market is already expecting it.

--
Perhaps, the worse 'doomer' interview I've seen so far this year. It is to be seen, as an example of how consistently stupid some of the 'omg, the financial system is about to collapse' people are.

I could pick it apart into a thousand pieces of 'You idiot, how can you say that...'..but really...Kirby should receive a lawsuit from the Federal Reserve.
-

Notable weakness: the drillers, DO, RIG, SDRL, not sure what that is about.
-