The US indexes all climbed for a third consecutive week, with the sp +1.3% to 1709 (with a new high of 1729). The two leaders - Trans/R2K, saw significant gains of 2.6% and 1.8% respectively. With QE continuing in full, the mid-term trend remains strongly to the upside. 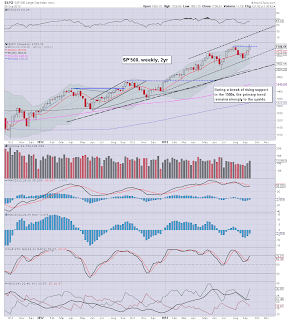 Despite a weak Friday, the sp' managed net weekly gains of a respectable 1.3%. Perhaps more importantly, the old 1709 high was decisively broken, with the sp' peaking at 1729. Equity bears have little to be concerned about, with the underlying MACD (blue bar histogram) cycle ticking higher for a second week, and set to go positive cycle within the next week or two.

First key support is the big 1700 psy level, with the weekly 10MA set to be in the mid 1680s next week. The recent low of 1627 looks unattainable any time soon. In terms of upside targets, bulls should be seeking 1750/75 by late October. 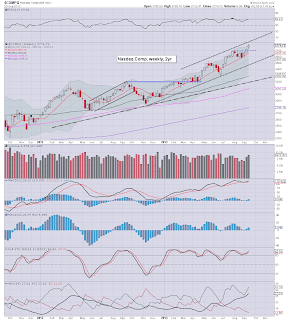 The tech managed gains of 1.4%, very much in line with the main market. With the Nasdaq now comfortably in the 3700s, it has to be said, the 4000s look very viable within the next month or two. The only question is whether the 5000s - a challenge of the tech bubble peak of 1999/2000, is viable. Even if everything remains okay, and significant QE continues across all of 2014, the big 5000 will be a tough psy' level to break and hold above. 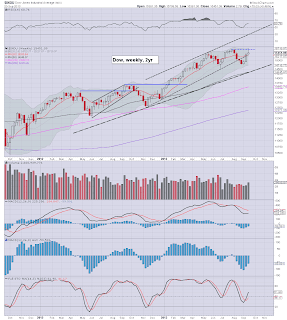 The mighty Dow was especially weak on Friday, slipping 185pts (-1.2%). However, it should be kept in mind that it was quad-opex, and the Dow was significantly rebalanced, with V, NKE, and GS in....whilst AA, BAC, and HPQ got booted.

I certainly will admit, if the Dow was the only index I was looking at, I'd be a little concerned at that weekly closing spiky candle. However, the Dow - like all other indexes, did break a new high this week, and despite the weak Friday close, the trend remains to the upside.

First big target for equity bears should be 16k, that should open up a swift move to 17k...and if 'everything holds together', the huge psy' level of 20000 is viable late next spring. 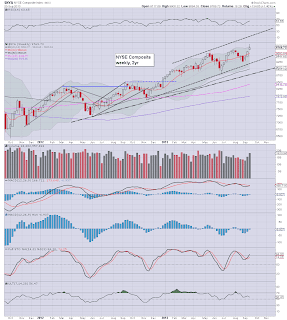 The master index made gains of 1.4% this week, and with QE continuing, the big 10k level is now within reach in Oct/November. Underlying MACD cycle is set to go positive cycle at the Monday open, along with a bullish cross. For the broader market, this is indeed a pretty bullish set up. 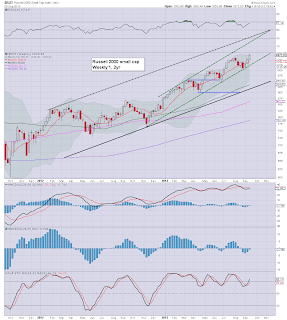 The second market leader managed significant gains of 1.8%, and looks set to make a play for the 1100s in October. The R2K remains in a powerful up trend from the November low of 763 - which now seems such a long way down. In my view, the only issue is whether the R2K will close the year in the 1200s..or the 1300s. The ultimate issue is whether the R2K will eventually hit 2k in the current multi-year rally. 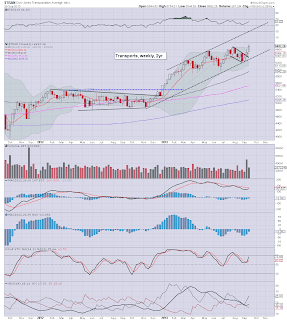 For the equity bulls out there, the old leader is telling a very bullish story, with weekly gains of 2.6%. The Tranny has broken into the 6700s, and the 7000s now look a very viable target for late Oct/November. Underlying MACD cycle is set to go positive within the next 1-2 weeks. There is simply nothing bearish here.

So, further gains for the US equities for the third consecutive week. Not exactly bearish, is it? The sp'1627 low is now looking well out of range, and considering ongoing QE, I have to think the primary trend will remain (disturbingly) to the upside.

As many recognise, October can be a very troublesome month for equities, yet...the trend IS up, the Fed continue to throw $85bn a month at the markets, and the mainstream remain contentedly in their delusion that a 'genuine economic recovery continues'.

In terms of the bigger picture, I have no choice but to hold to the following hyper-bullish outlook. 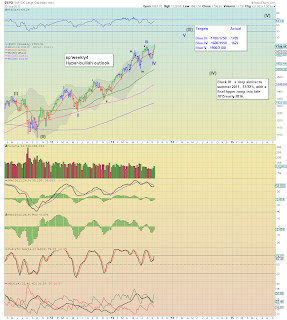 Unless some major issue rears up - whether the US debt ceiling, EU cross country arguments about further bailouts (Greece), or renewed middle eastern issues, the market looks set to rally straight up into next spring. On even a conservative outlook, the sp'2000s look a very reasonable target.

There isn't much on Monday, Tuesday has homes data and consumer confidence. Wednesday has durable goods orders and new home sales. Thursday has another GDP reading (market is expecting a slight upward revision to 2.7%). Friday concludes with personal income/outlays and consumer sentiment.

It should be noted there are the usual 'fed people' speaking across the week, and lately, Mr Market is especially prone to swinging somewhat wildly depending on what the latest fed person has to say.

As I read around the financial blogosphere, I'm still seeing a surprising amount of 'ohh, a big correction' is coming. Really? Didn't we just have two down waves, one in June to sp'1560, and the recent one to 1627.  I mean, sure, we'll doubtless have another minor pull back before the year is concluded, but that will probably be from much higher levels. We could easily battle higher to 1750/75 in October, and then pull back to 1725/00. What good is that for the bears?

Unquestionably there are huge economic issues out there, but with the Fed keeping the printers running at $85bn a month, I can't envision any major drop now until next summer. The best case the bears have is for QE-taper 'sometime' in Oct/Nov, and even then, the market will still have $70bn a month of new money being thrown at it.

I sure don't like it, but I can't keep trying to short this market whilst QE continues. It has largely been a waste of time and effort, never mind the money.

As ever, all comments welcome. Back on Monday :)
Posted by Trading Sunset at 19:32:00
Email ThisBlogThis!Share to TwitterShare to FacebookShare to Pinterest

Broader trend remains to the upside

Despite the indexes closing the week on a slightly negative note, the sp'500 climbed for the third consecutive week, with net weekly gains of 21pts (1.3%). With the 1709 high from early August being decisively broken, equity bulls look set for continued upside into October. 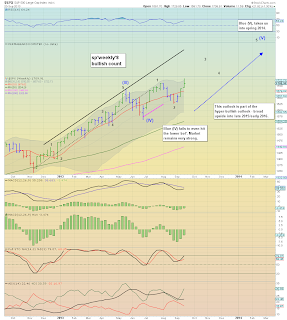 Just a single chart to end the week, and I think the above weekly 'rainbow' chart says all that needs to be said.

The bulls managed to climb for a third week, and more importantly, the old 1709 high has been broken - as also matched on all the other indexes.

*next main post, late Saturday, on the US weekly index charts
Posted by Trading Sunset at 04:00:00
Email ThisBlogThis!Share to TwitterShare to FacebookShare to Pinterest 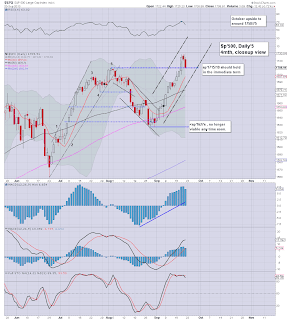 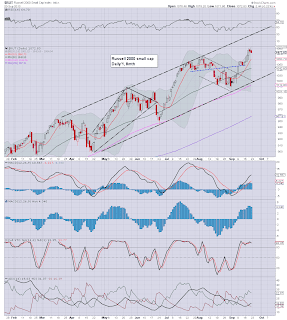 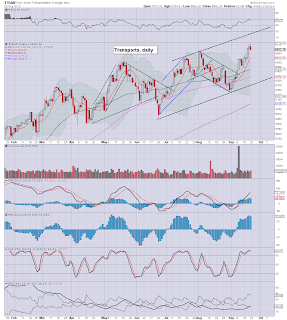 Suffice to say, with It being quad-opex, along with a major index re-balancing, I'm somewhat dismissive of today's price action. Although I had certainly been looking for downside into the sp'1714/10 zone.

The broader weekly trends remain strongly to the upside. Baring a few daily closes <sp'1700, I really don't think equity bulls have anything to be concerned about.

*there are 3 significant QE-pomo days next week, and that should easily be enough to help the market battle to new highs, with sp' in the 1730s.