It was a bearish week for US equities, with net weekly declines ranging from -1.0% (Dow), -1.1% (sp'500, NYSE comp'), to -2.5% (Trans). Near term outlook will be largely dependent on whether there is any 'spooky' geo-political news - not least from North Korea. Otherwise, the mid term bullish trend should reassert itself into end month. 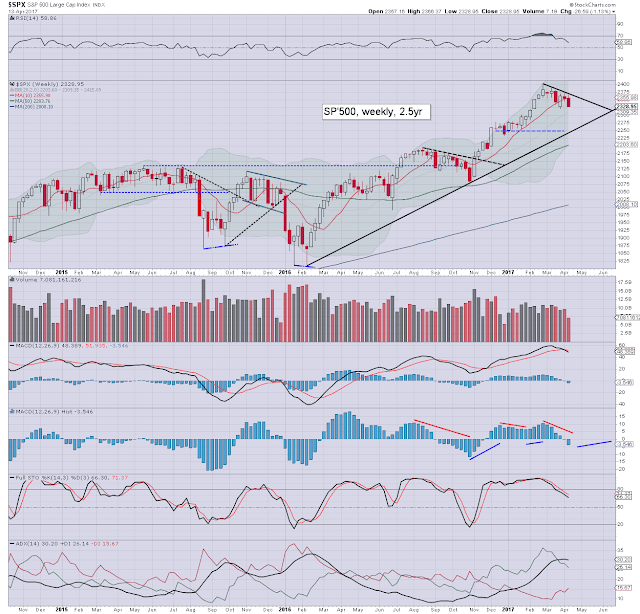 The sp' saw a net weekly decline of -26pts (1.1%), to 2328. Having seen a Monday opening high of 2366, there was a distinct case of the 'rats selling into the long weekend', with the sp' settling at the low of the week. Underlying MACD (blue bar histogram) ticked lower for a sixth consecutive week, and is now moderately below the zero threshold.

Its notable that the sp' could fall to 2250 next week, and that would still not break the mid term rising trend, that extends back to the Feb'2016 low of 1810. By early June, that aspect of key support will have risen to around 2300.

Best guess: the mid term trend will resume, with a push to new historic highs in the 2400s, whether late April or early May. The year end target of 2683 remains on track, but will arguably need the 2500s by September.

Equity bears have nothing to tout unless a break under the monthly 10MA, which is currently in the 2240s, and rising by around 25pts a month.
-- 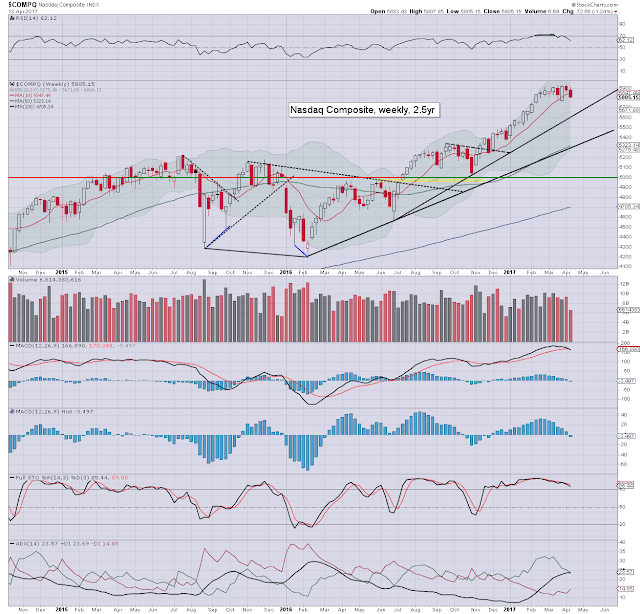 Even the strongest sector of the market - tech, has been weakening, with the Nasdaq comp' declining for a second consecutive week, -1.2% to 5805. This was the first close below the 10MA since Nov'2016. Its notable that core rising trend is all the way down around 5300. Near term, there is 3% of open air to first soft rising trend. On balance, the 6000s still look due by early May. 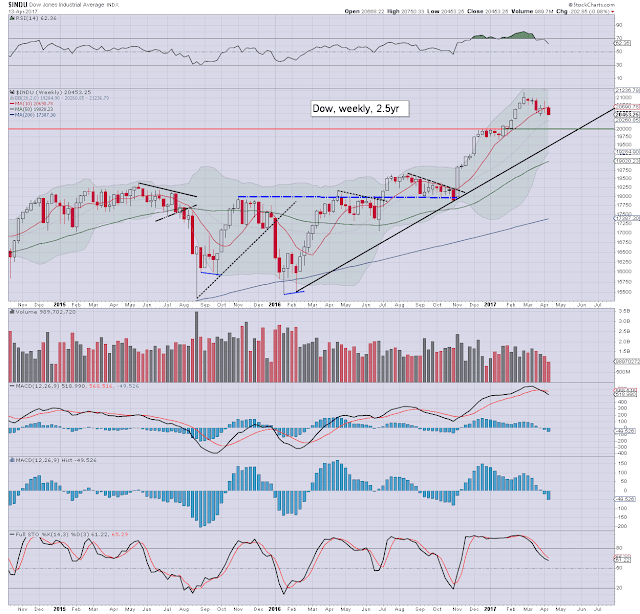 The mighty Dow cooled into the long weekend, settling net lower for the week by -202pts (1.0%) at 20453. First big support is the giant psy' level of 20k. Its notable that the lower bollinger will be in the 19300s next week, and frankly, that looks well out of range. Price structure since the Feb' high of 21169, is arguably just a bull flag. Equity bulls will need to see a few daily closes >20800 to have provisional confirmation. 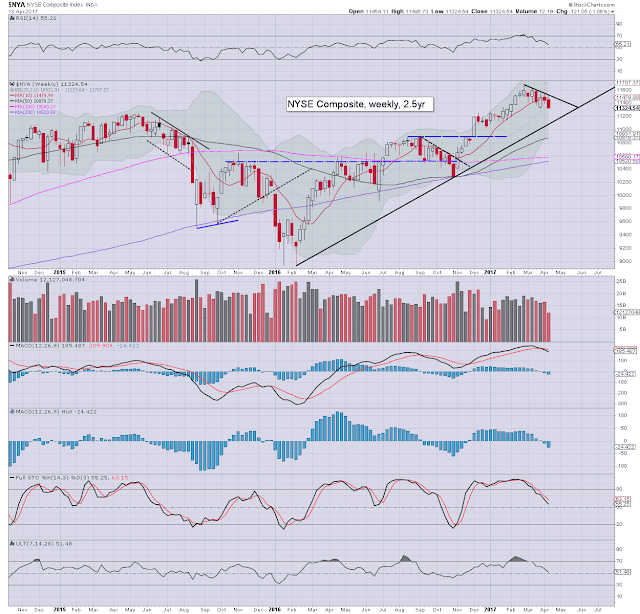 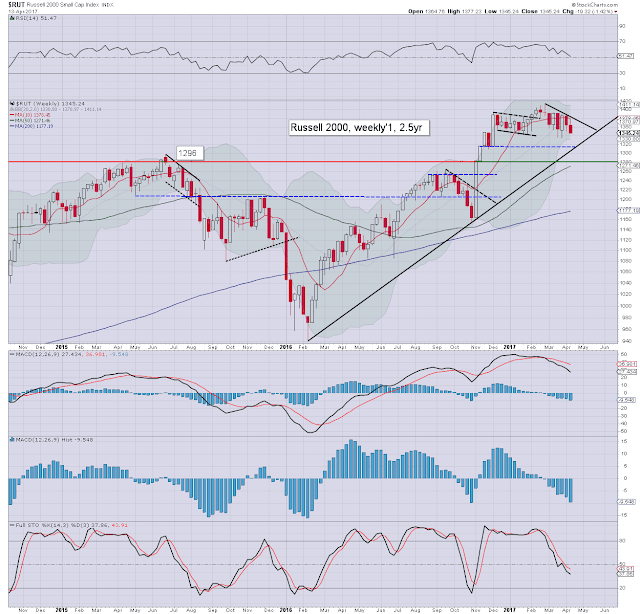 The second market leader - R2K, settled lower for a second week, -1.4% at 1345. There are multiple aspects of support within the 1330/15 zone. Those equity bears who believe the market is already maxed out, should be seeking a decisive break under more important support of the 1300/1280 zone. Any weekly/monthly closes <1280 would indeed merit alarm bells. On balance though, along with the main market, the R2K should resume upward. First soft target is the recent historic high of 1414, where the upper weekly bollinger is lurking. 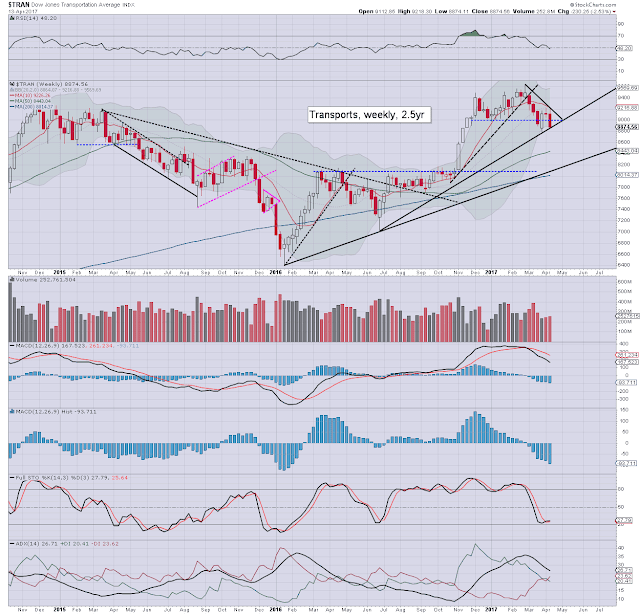 The 'old leader' - Transports, settled lower by a very significant -2.5% to 8874. Underlying MACD ticked lower for an eighteenth consecutive week, and we're at levels not seen since Feb'2016. Its further notable that the tranny has now settled under the key 10MA for six consecutive weeks. Equity bulls should be seeking price action back >9300 to have renewed hope of 10k by late summer.
--

All US indexes remain relatively close to historic highs.

Price structure since late Feb/early March could be argued is a bull flag.

The two leaders - Trans/R2K, are now cyclically on the very low side, and will be highly inclined to claw back upward into end April.
--

There is a quintet of fed officials on the loose, but none of them seem particularly important.

**Very few expect rates to be raised at the FOMC of May 3rd. June 14th is the next important fed meeting. The financials will clearly need another rate hike this summer to remain broadly bullish, from the Nov'2016 breakout.
--

Highly recommended. Mr A' remains one of my most favoured to follow.

--
CNBC - futures now, with the Schiff

Its much of the same from Schiff, long term bullish gold/miners, and very bearish for just about everything else. I do like how Schiff will fight against the cheerleaders of clown finance TV. Its worth watching for that alone!

Have a good Easter break
--

*the next post on this page will likely appear next Monday at 7pm EST
Posted by Trading Sunset at 17:00:00
Email ThisBlogThis!Share to TwitterShare to FacebookShare to Pinterest

US equity indexes closed broadly weak, sp -15pts at 2328. The two leaders - Trans/R2K, settled lower by -1.1% and -1.0% respectively. Near term outlook is uncertain, and will be dependent on whether anything 'spooky' happens in North Korea this weekend. 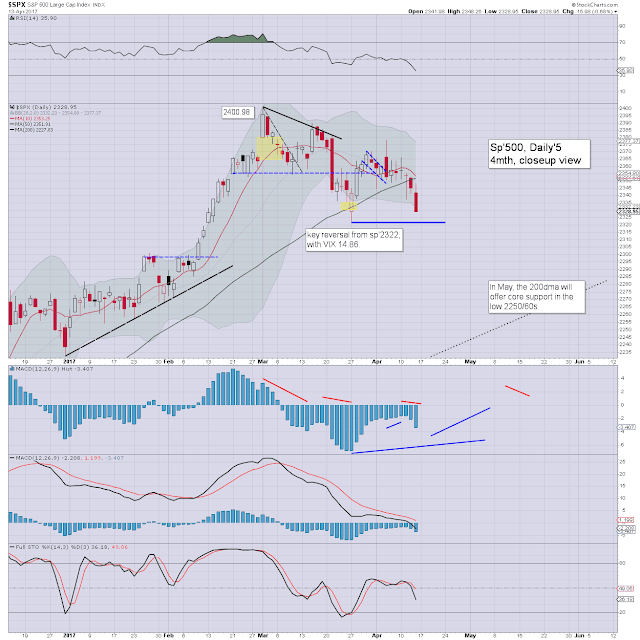 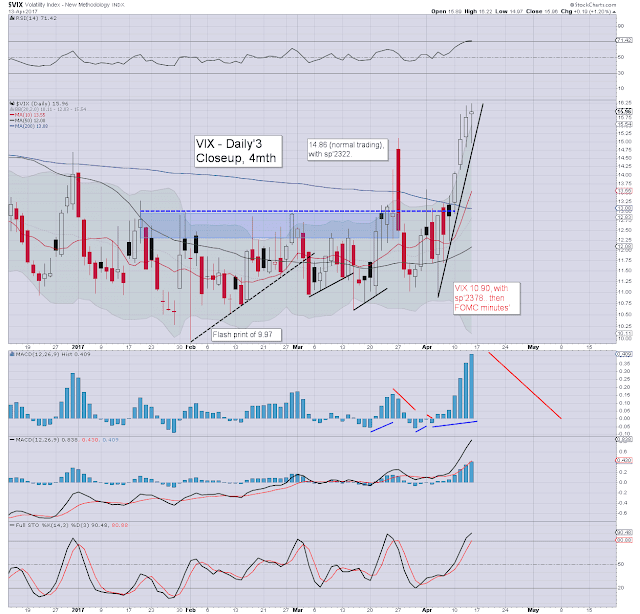 It was another day of moderate swings, as equities opened a little lower, saw an early reversal, but with very few willing to buy ahead of the long weekend, the minor gains were simply not sustainable.

There was a distinct case of the 'rats selling into the long weekend'. This was very understandable as there are indeed a fair few valid geo-political concerns, not least about North Korea.

Market volatility remains somewhat elevated in the mid teens. The key 20 threshold still looks out of range, unless there is some kind of 'mayhem' in North Korea. On balance, the VIX really should cool into end month.. back to <13, as earnings and econ-data, should come in at least 'reasonable'.

*the weekend post will appear early, Friday, 12pm EST, and will detail the US weekly indexes
Posted by Trading Sunset at 00:00:00
Email ThisBlogThis!Share to TwitterShare to FacebookShare to Pinterest
Newer Posts Older Posts Home
Subscribe to: Posts (Atom)