The US indexes saw rather significant declines for August, with general declines of around 3%. Nasdaq slipped just 1%, whilst the Dow -4.5%. There looks to be a relatively easy 3-4% further downside in September, before the next bounce. 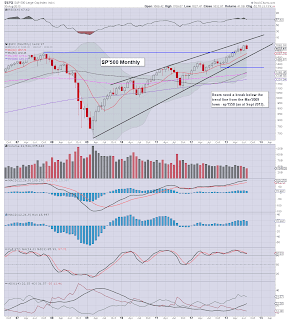 The sp'500 lost 3.1% across August, the biggest closing monthly decline since May'2012. Certainly the decline is nothing major, but it could be the start of something much bigger.

Underlying MACD (blue bar histogram) cycle ticked lower, but there is no bearish cross yet, and bears can't get overly confident until we have a monthly close below the 10MA, which will probably be around 1570 at the Tuesday open.

For those seeking a significant drop this autumn, the key level is the 1560/30 zone - the June/April lows. Any monthly close <1530, and the door will be wide open to the low 1400s by late November.

It is probably important to note, that by the end of this year, the lower bollinger on the big monthly chart will have risen to around 1350/75. On any outlook, I can't conceive of any price action under that level for another 9-12 months. 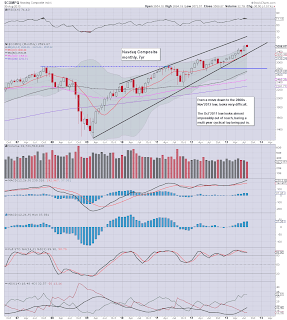 The Nasdaq was the strongest index for August, declining by just 1.0%. No doubt, the broad rally in AAPL helped prop up this index. Bulls should find strong support in September, in the 3400/3300 zone. A return to the Nov' 2012 lows of 2800 (equating to sp'1400/1350), looks just about viable in Oct/Nov. Clearly though, we don't have a trend break yet though. 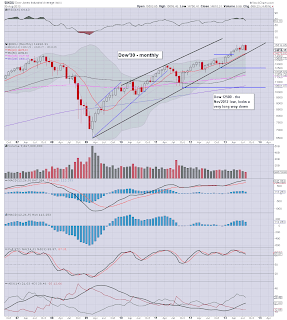 The mighty Dow got somewhat whacked in August, and was the weakest index, slipping a rather significant 4.45%. Bears have a pretty secure four month castle top (as I like to call it) in the 15500/600s. I certainly don't expect Dow 16k any time soon.

There is very important trend support around 14400 in September. Any break of 14400 will open up 14000/13900. Perhaps most importantly, the MACD cycle ticked lower, and there is a chance we'll see a bearish cross in September (briefly) before the next bounce. The bigger bearish target would be around 12500/250 in Oct/Nov. 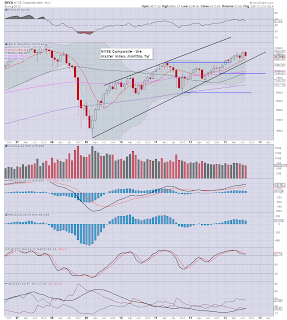 The master index fell 3% in August, and was indeed very representative of the wider market. Near term target is around 9000/8900, which is around 4% lower (again, that would equate to around sp'1570). Despite the August declines, the broader trend remains upward, and bears will need a break of 8800/8700 to offer much lower levels this autumn. 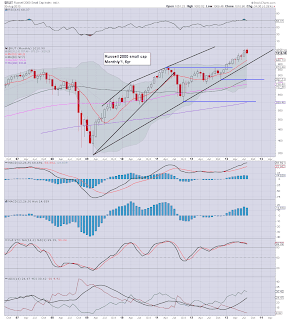 The Rus'2000 small cap lost a rather significant 3.3%, and the Friday close was particularly bearish, closing right at the lows. However, it must be said, having ramped so much in the first half of 2013, the R2K can fall a lot, and even then, it won't break the broader upward trend.

Bulls can sustain the 950s in September, and that will do nothing to break any key level. For those seeking autumnal weakness, the bigger downside target is 800/750, a very significant 20/25% lower. 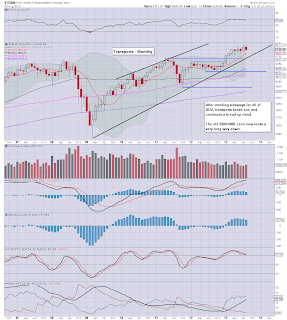 So...August turned out to be pretty good for the bears. Certainly, the bull maniacs have seen the indexes get seriously stuck since May, with the Dow pretty much unable to clear the 15600s.

Unquestionably, the broader monthly trends remain strongly to the upside, but we're also well overdue some kind of multi-month decline, much in the style of July-Oct' 2011.


The stuff of dreams

I remain resolutely seeking further downside in the first half of September. Primary downside target remains the lower weekly bollinger, which at the Tuesday open will likely jump to the low 1570s - for statistical reasons.

If we can hit the 1570/60s before the next FOMC of Sept'18, I will keep an open mind on the following uber-doom scenario. 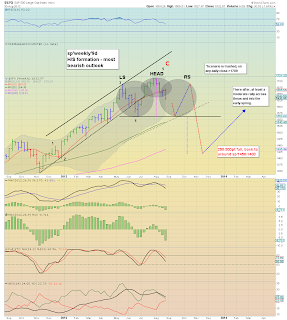 In my view, bears need to see not only a hit of the lower weekly bol, but then for the subsequent bounce to be contained under the recent sp'1709 high. If the market gets stuck in the 1660/90s in October, then things get 'real interesting'.

Tuesday starts with ISM manu' and construction (both 10am), so the market will have something to begin the shortened week. Wednesday has vehicle sales, intl' trade, but more importantly..its time for another Fed 'beige book'. That will no doubt inspire a lot of taper on/off chatter.

Thursday is packed with data - ADP jobs, weekly jobs, productivity/cost, ISM non-manu, and factory orders, along with the Oil and Nat' gas reports.

However, the week concludes with the big one..the monthly jobs report. Market is expecting 175k net gains, with a static headline rate of 7.4%. Those targets look relatively easy to hit, and as ever..the issue will be, does the market consider 'good news as bad' or 'good news as good'.

It would seem his highness, Obama has declared he will take military action against Syria. However, he will also call for a congressional debate and vote, to support such action. I am of the understanding that Congress won't return until Sept' 9, so..we're looking at least another week or two before any military action. I also believe it is fair to say that he will turn the launch keys regardless of the vote outcome. No doubt, if the vote is no..and he fires anyway, that will really rile up a lot of people.


Video - A history of Syria

The following is something I saw a few days ago. It is a pretty fair historical summary of Syria. In particular, highlighting a few of the key reasons for the ongoing civil war. Not surprisingly, it was the imperialist British and French who critically fractured the middle east by drawing arbitrary lines on a map.

In terms of how we open next Tuesday, considering the hourly index/VIX charts, I'm guessing the market will try to rally, if only a little..and briefly. The fact we have a large dose of QE to start the week will no doubt help.

All things considered, I will be looking to launch another index short/VIX long, the only issue will be finding an acceptable entry level..depending on the style of price-action. To be clear, I am very much holding to the original outlook, sp'1570/60s, and VIX (briefly) in the low 20s.

As ever, all comments most welcome. Enjoy the long weekend

Video update from Walker (which I think is his last free update for some time).

The comments on the big monthly charts are particularly interesting, although dare I say, Walker is arguably even more of a permabear than yours truly.
-- 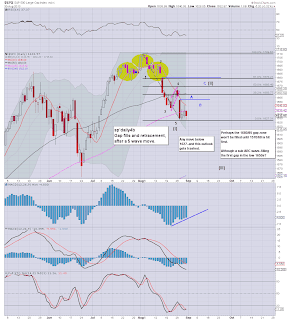 Considering the MACD on the daily charts, and a significant number of chartists out there touting 5 waves down (which does look pretty clear)...perhaps we'll get a multi day wave'2 ABC bounce.

With military action probably a few weeks off, I'm also a little concerned the market might start battling higher on spurious news reports that a 'no' vote is possible.

Anyway, the above 4b outlook will get dropped if we break below 1627. If that is the case, I'll just chase it lower.
-

Futures.. sp+10pts, that should concern those holding on the short side. Obviously a lot can  happen between now and the Tuesday open, but still..all those hoping for some kind of major Tuesday gap lower...err..no.

Finviz is not updating..but Bloomberg is.

I think we can look to the action of mid June as a clue. Maybe a few days higher..then a sharp  B' wave drop..before a C' wave higher the following week.

At this rate..another two weeks of chop/retacement, and the lower weekly bol' target will be 1580/85.

Oh well, as ever...one day at a time.
Posted by Trading Sunset at 20:21:00
Email ThisBlogThis!Share to TwitterShare to FacebookShare to Pinterest

Another week for the bears

A weak end to the week for US equities, and indeed, August as a whole saw some rather interesting declines across all indexes. With the monthly charts starting to turn lower, the equity bears are starting to build some downside momentum for the coming autumn. 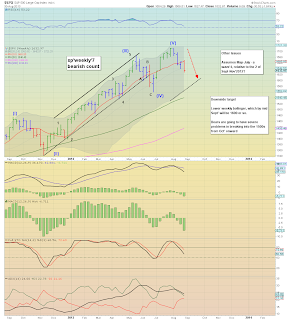 For the weekly rainbow chart we actually managed to close with a red candle, the first since mid June. The current target remains unchanged, I'm seeking a hit of the lower weekly bollinger...currently 1563, although I expect that to jump to around 1570 at the Tuesday open - for statistical reasons.

I'll do a full monthly report this weekend, but suffice to say, we did indeed see some interesting declines, although the broader trend is still unquestionably to the upside. The closing blue candle is a initial sign of weakness, but we've seen plenty of blue candles in the past fail to have follow through. 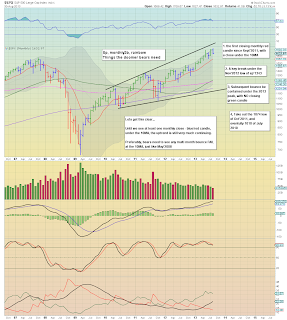 Bears should be seeking a hit of the monthly 10MA, currently 1557, but that will also likely jump into the 1570s at the Tuesday open.

In many ways, the 1570s look a very obvious..and natural target for the first half of September, before the next rally. The only issue is whether the next rally puts in the first critical lower high..<1709.

*I exited VIX-long near the close, but will seek an index short/VIX long, sometime next Tuesday. I'll actually be hoping the market manages a brief 0.5% gain to start next week, if only to get a better short-entry level.
--

*next main post, late Saturday, probably on the US monthly indexes
Posted by Trading Sunset at 04:00:00
Email ThisBlogThis!Share to TwitterShare to FacebookShare to Pinterest

The US market saw some weakness to conclude the month, with the sp -5pts at 1632. However, the two market leaders - Trans/R2K, saw rather significant declines of 1.1% and 1.6% respectively. Near term trend remains weak, with a primary downside target of sp'1570/60s. 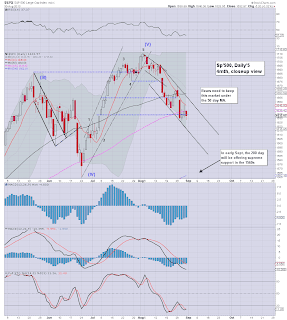 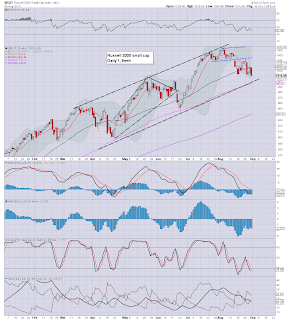 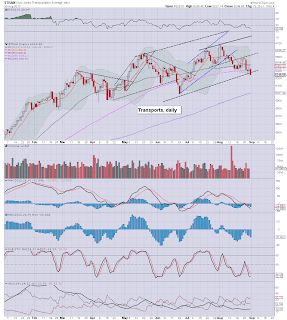 I have to say, I'm a bit bemused at the large discrepancy between the headline indexes - sp/dow/nasdaq, and the two market leaders - Trans/R2K

As ever, I think its important to keep in mind that whilst the main media-friendly indexes only saw moderate declines, the two leaders were very weak indeed.

Regardless of whether there is any military action across the long 3 day break, the US indexes look broadly weak.

Any Tuesday bounce is one I will be seeking to short...all the way down to 1570/60. I actually think there is a very reasonable chance of that target being hit by the end of next week..along with VIX in the low 20s.