With the indexes building upon opening gains across the day, the VIX was lower, but only by 1% at the low. The VIX managed fractional gains by the close, +0.7% @ 13.71. Hourly charts offer VIX upside for Tuesday, with near term initial target on the daily charts remaining in the 16/17s. 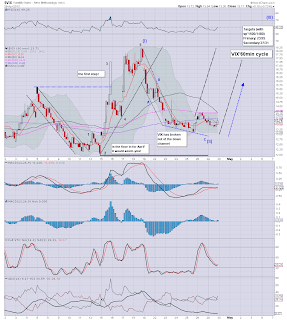 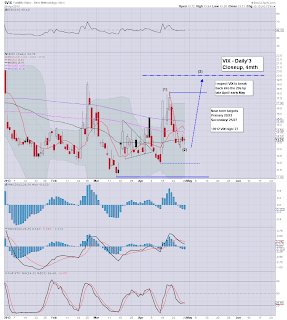 Today was one of those rare days where we have all the indexes closing with distinct gains, but where the VIX was flat..or in today's case..even a touch higher.

Certainly, the hourly charts offer upside across Tuesday, but how high? Daily charts would suggest 16/17s are viable. That is going to probably need sp' back in the 1560s, if not even the 1540s.

As has been the case since late December, first big target is the key threshold of VIX 20. A daily/weekly close >20 would be very significant, and clarify that 'things have changed' since the current index wave from last November.
--

The market held minor opening gains, and built upon them across the day. Most indexes saw some clear breaks above last weeks highs, and the Nasdaq even broke the April 11'th high. Hourly charts look prone to weakness on Tuesday, but daily charts show no sign of a broader trend change. 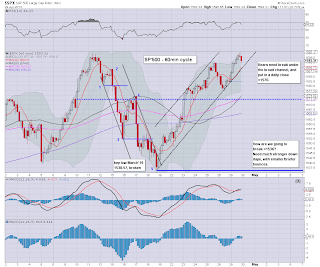 Despite a touch of weakness in the closing hour, a very disappointing start to the week.

Yet, it is a long week, we have big econ-data/events every day this week, with the FOMC on Wed', the ECB on Thursday, and key jobs data on Friday.
-

Arguably, the big/serious money bears should have got short stopped out this morning, and most surely can't consider a re-short, until confirmation with a daily close <sp'1570.

more later..on the VIX
Posted by Trading Sunset at 21:00:00
Email ThisBlogThis!Share to TwitterShare to FacebookShare to Pinterest

With the Nasdaq at new highs, and the Dow/Trans taking out the high from last Thursday, the bulls have achieved a significant victory to begin the week. Even if the bears can manage a small down cycle into the 1580s tomorrow, it will count for nothing. Only the 1560s offer any hope of a mid-term trend change. 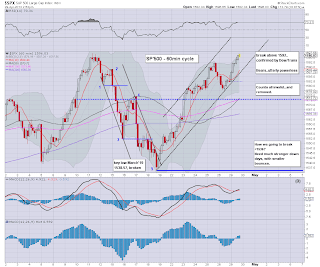 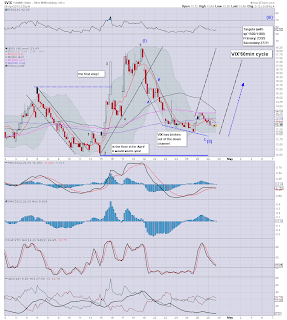 VIX might close green, not that it really matters. Most of the indexes have broken key levels, and the only issue now is whether the bulls can get follow through on Tuesday.

back at the close.
Posted by Trading Sunset at 19:59:00
Email ThisBlogThis!Share to TwitterShare to FacebookShare to Pinterest

Mr Market is still battling upward, and we now have the Nasdaq above the April'11th highs - equivalent to sp'1597. SP' itself is imminently set to break that high, and a daily close in the 1600s should cause major concern for those seeking downside across May. 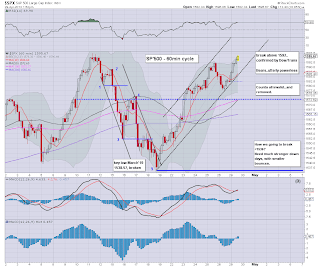 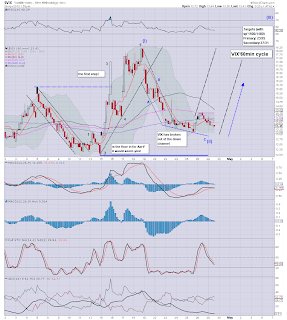 Suffice to say.. a lousy start to the week. There are a few 'small signs' things might be better for the bears tomorrow, but arguably the big/serious money already got short stopped out today, if not last week.

Only the reckless remain.
Posted by Trading Sunset at 18:56:00
Email ThisBlogThis!Share to TwitterShare to FacebookShare to Pinterest

1pm update - bears on the run

The leading indexes are all above the highs of last Thursday. Naturally, the bears are now getting heavily short-stopped out of their positions, and we're no doubt also seeing some bull chasers starting to appear. With a weak USD, and generally 'nothing going on'...algo bot melt into the close seems likely. 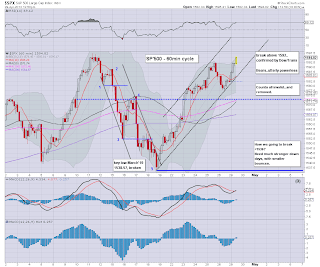 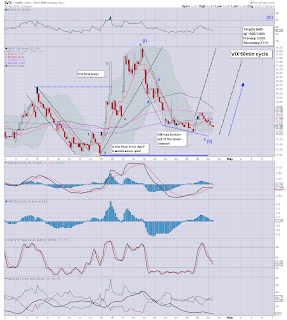 Hourly index charts have to be redrawn, and with the break >1592, counts need to be thrown out. I suppose some might tout the recent wave lower as a big 4, ..but whatever it is, we're now very much higher.
--

Daily charts offer NO sign of any turn lower.

The one thing the bears still have is a VIX that is only down a few percent, but then...VIX can't get much lower than the 13s anyway.
-
For those not already short stopped out..this is turning out to be something of a Monday mini-massacre.
--

Oil testing the 200 day MA..so far.. failing to hold over, but obviously the near term trend is still generally to the upside. 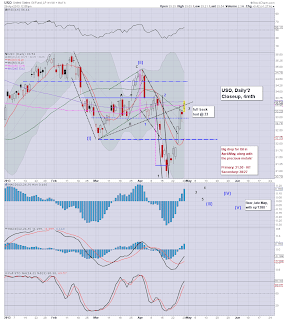 I'm still amazed it made it back into the 33s at all.

12pm update - still on the border

With the Dow and Transports breaking above last Thursdays 'marginally lower high', the bears have a serious problem. Bears appear weak, and if the algo-bots are left alone, we'll be back to the usual late day afternoon melt, where even the sp' will be >1592. 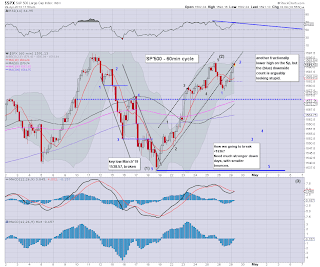 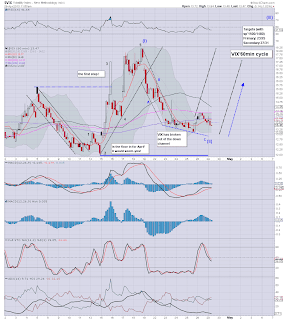 With the weak USD, precious metals and Oil are getting an extra kick higher.

--
*I remain heavy short, but underwater. Not drowning (yet)...but might need scuba gear by the close.

Those touting a cycle high in mid May..now look more likely than not.
Posted by Trading Sunset at 16:53:00
Email ThisBlogThis!Share to TwitterShare to FacebookShare to Pinterest

The market has built upon earlier gains and we've seen the Dow and Transports break above last Thursdays highs. The SP and R2K are still fractionally under. So far, bears are showing absolutely no downside power, and with a weak USD, everything is melting higher. 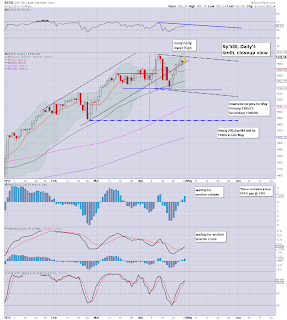 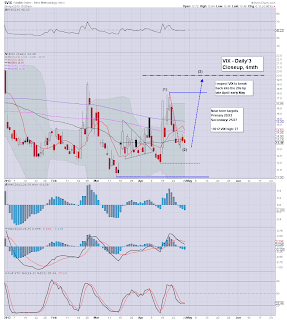 The daily charts are still outright bullish - especially for the Dow/Trans, and until we're trading <sp'1570, bears are in serious danger.

After all, its FOMC week, and if Mr Market decides 'QE forever' really does mean 'forever', then sp'1600s will be hit.
-

Its all very disappointing, but its a long week.. could turn yet, but hey, that's merely a vain hope this morning.

Frankly though, can't be even slightly confident until <1570, and that sure doesn't look viable today. Bears just look embaressingly weak.

11.40am  hourly charts suggesting bulls have had their fun for the day, perhaps the week.

Remains borderline situation, and the problem I have, is that even sp' doesn't break 1592, the dow...and transports did.

No bearish clarity, unless <1570.
Posted by Trading Sunset at 15:53:00
Email ThisBlogThis!Share to TwitterShare to FacebookShare to Pinterest

10am update - waiting for weakness

Market opens moderately higher, but there are signs the indexes will see increasing weakness across the day. Main problem for the bears is the weaker USD. Metals and Oil are higher, but well below their earlier highs. 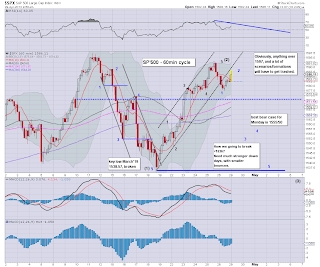 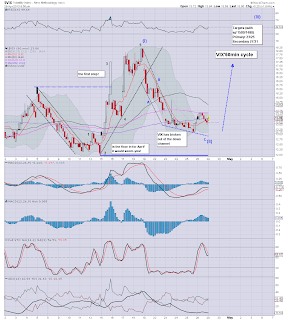 Daily charts (not shown) are still to rollover, so lets be clear...bears can't be the least bit confident yet.

Worse, any break >1592, and that would really mess things up for my mid-term outlook.

Urghh, this is starting to get annoying again!

Dow/Transports..already ABOVE the Thursday high.

The sp'1600 believers will be appearing all over the web within the hour. I can't say I blame them. This ain't looking so good.
Posted by Trading Sunset at 14:54:00
Email ThisBlogThis!Share to TwitterShare to FacebookShare to Pinterest

Good morning. Futures are moderately higher, sp +4pts, we're set to open @ 1586, a mere 6pts from the Thursday high. USD is notably weaker by 0.5%, and this is probably helping to kick just about everything higher, inc' the precious metals and Oil. Bears need to reverse this..quickly.. 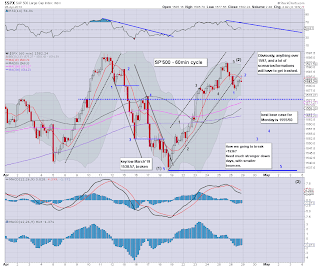 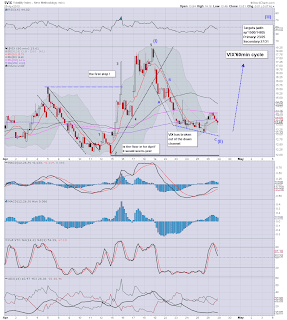 So, we're set to open a little higher. Bears need to see a morning reversal, or bulls could get a close back into the 1590s, and that would bode badly for the rest of the week.

Yet, there is a truckload of econ-data this week, so....lets see how today goes first, before waving the white flag.

Good wishes for the week!
--

9.35am... black candles all over the place. Spike out the weak bears..and then reverse?

I won't be in the least bit pleased unless we get a close in the 1560s..which right now, looks a long way down.
-
Long day ahead.....long week.
Posted by Trading Sunset at 13:25:00
Email ThisBlogThis!Share to TwitterShare to FacebookShare to Pinterest
Newer Posts Older Posts Home
Subscribe to: Posts (Atom)