Whilst the indexes closed largely flat, the VIX actually closed up a moderate amount. Sure, the VIX remains at a very low level, but bigger weekly cycle is starting to tick higher again.

Whether bullish or bearish, traders should be mindful of the weekly VIX cycle, which is again starting to turn upward on the MACD cycle. 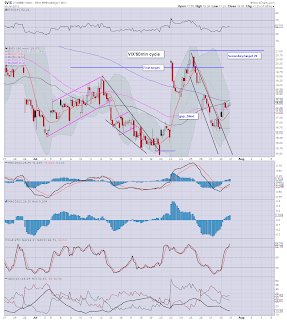 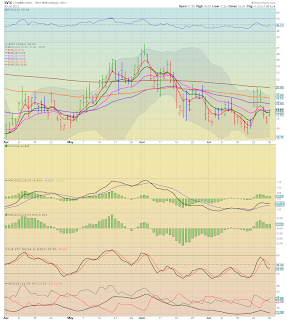 Somewhat surprisingly, we did actually get a green candle to close the day on the rainbow chart. Almost a 8% close higher for the VIX, yet we're still only around 18. Even a further 10% jump will barely get us to 20, and that is barely borderline 'interesting' for the bears.

As noted many times before, look to the VIX weekly as one of the prime early warnings for any major down cycle. For anyone who believes 'big doom down wave' coming soon, now would doubtless be the time to start going long volatility.

A little more later.
Posted by Trading Sunset at 23:00:00
Email ThisBlogThis!Share to TwitterShare to FacebookShare to Pinterest

Mr Market had a somewhat flat and dull Monday, largely as expected. 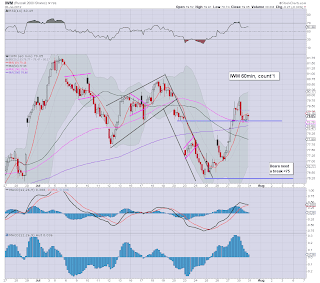 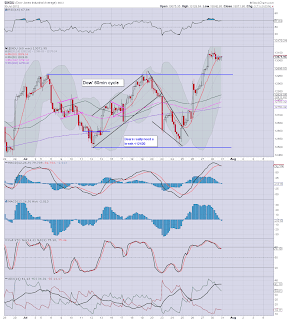 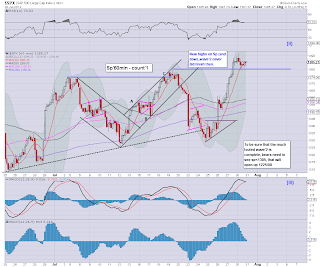 As expected essentially a flat close. Tuesday will be much more dynamic. A move as deep as the low 1360s is viable

Notable move of the day, VIX +7%. I suppose that is something for the bears, and might be the very early beginning of a major VIX leap over the recent high of 21
--

On what is a sleepy Monday..here is something to close the trading day... (a little..fun from RT TV)


Posted by Trading Sunset at 21:03:00
Email ThisBlogThis!Share to TwitterShare to FacebookShare to Pinterest

Market back to churning sideways again. The algo-bots might easily wish a close just a over 1380. 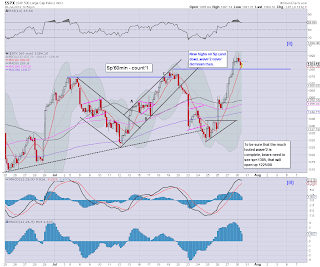 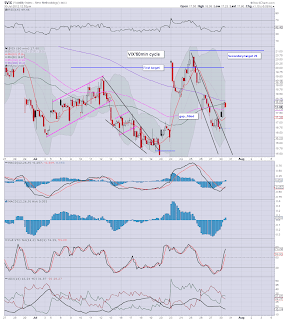 Even 18.50 looks out of range right now for todays close

I'm still not expecting anything, a flat close would make for a perfect doji candle..and sets up tomorrow for the first opportunity to see something significant. As noted earlier though, even sp'1360 would be a normal retracement in what is currently a strong up trend.
Posted by Trading Sunset at 17:55:00
Email ThisBlogThis!Share to TwitterShare to FacebookShare to Pinterest

A minor cool down after the nonsense of Thursday and Friday. Yet..so far, its all irrelevant noise. Even a move to 1360 would make for just a normal retracement.

Any doomer bear out there needs to see a weekly close <1325 to get justifiably excited, and right now..that provisional sell-signal level is a long way down. 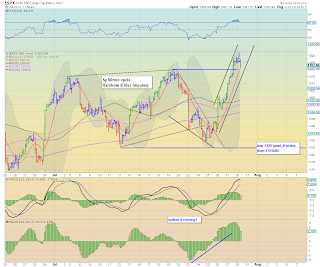 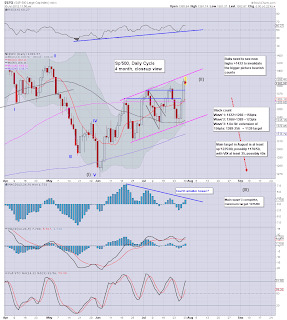 Bears should seek a close under the hourly 10MA of 1380, even that won't be easy though, since we'll more than likely level out in the next hour or so.
--
No significant down moves to be expected until Tuesday at the very earliest.
Posted by Trading Sunset at 16:52:00
Email ThisBlogThis!Share to TwitterShare to FacebookShare to Pinterest

The hourly index charts are very high on the RSI. This is obviously not the best of times to be adding to existing long positions. 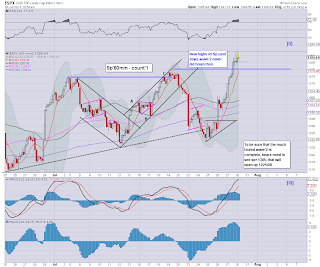 Tuesday will be the start of more dynamic action. Today...we look set to close flat..look for a nice doji candle on the daily charts!


Posted by Trading Sunset at 15:56:00
Email ThisBlogThis!Share to TwitterShare to FacebookShare to Pinterest

I'm tired of Monday already, can we just move straight onto Tuesday please? However, it is a good day for anyone who wishes to reposition. Whether adding longs or shorts. A day like today offers everyone a good opportunity to be ready.

We do have a lot of econ-data starting tomorrow, so today is indeed the day to get organised. 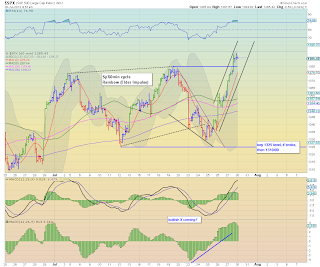 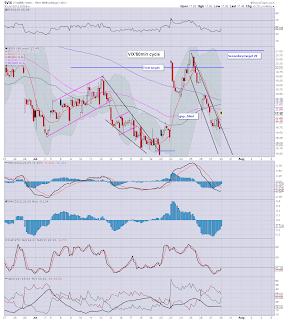 Not much to add. Although a little interesting to see the VIX up - even as the indexes went green too.

More later
Posted by Trading Sunset at 14:52:00
Email ThisBlogThis!Share to TwitterShare to FacebookShare to Pinterest

Good morning, welcome to another week in crazy market land!

Futures are marginally lower, sp -2pts, we're set to open around 1383 or so. There is no econ-data today, so I'd really not expect any big moves from today. Of course, after two giant up days, there is a much higher probability of at least minor upside, than even a moderate fall by the close.

It does seem like most out there, are agreed - we're due a further slight move higher into the 1390s/1400s. Even those who are still clamouring for a huge wave lower seem agreed on that. 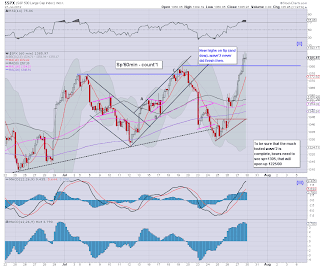 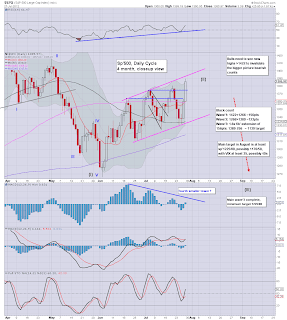 First, lets be clear about this...there is no sign of the current up-trend levelling, no sign of ANY turn.

The doomers could hope we are putting in a fourth - and again, smaller tower on the MACD (blue bar histogram). I suppose we might see another rollover later this week, but right now, it remains a distant and arguably weak hope.

Last week opened dramatically lower for the bears...it sure didn't end that way. We have the FOMC on Wednesday. A few are actually looking for QE to be announced this week, I don't think so..not until Thursday Sept' 13th. We have the monthly jobs data on Friday, some are looking for a negative print, clearly the summer of recovery 2012 is continuing.

If there is one thing that I believe is now most important of all. Until we break <1325, any decline is not to be taken seriously. Bears have been teased over and over for the past 2 months since the early June low. Only with a break under 1325 is there a chance of something major occurring. Until then, the broader up trend should be said to be continuing.  For the bulls, sp'1422 is of course key, any move over that, and most of the bears will again throw in the towel - although there really aren't that many left now anyway.

Good wishes for a week that will doubtless end more dynamic than the way it is currently starting.
Posted by Trading Sunset at 13:11:00
Email ThisBlogThis!Share to TwitterShare to FacebookShare to Pinterest
Newer Posts Older Posts Home
Subscribe to: Posts (Atom)