Many of the world indexes appear to be consolidating their gains, from what has been a very strong push higher that began last summer. Only the Italian market is having any real trouble - no doubt due to the recent elections, whilst the USA, UK, and Japanese markets are still looking strong.

With a new month underway, lets take our regular look at ten of the main equity markets.
*all charts, 20yr, monthly candles 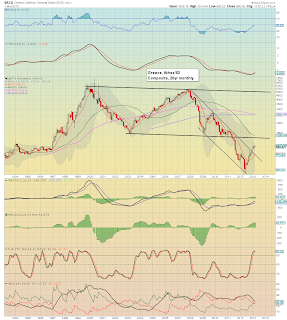 Greece continues to collapse economically. Greek (youth) unemployment is now in the region of 60/65%. Effectively, if you're in your 20s, you can't expect any hope of a job for 'years', if not the rest of this decade.

Despite the economic reality, the Greek market is still bouncing from the summer low. The natural target remains 1300, I can't see the Greek market >1500, no matter how many Greek bonds the ECB buys. 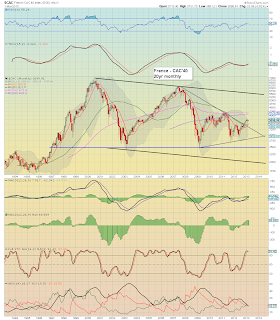 Like many indexes in recent months, the French CAC has broken out of a down trend. However, its been stuck since the start of the year. There does look to be around 15/20% 'easy upside'. 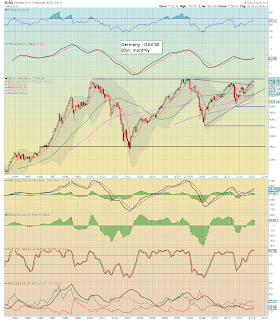 The powerhouse of the EU, Germany has key elections looming later this year. I expect Merkel to get the kick, and that does open the door to a 'Sunday night surprise', where Germany unilaterally bails on the Euro currency, and switches - across a few 'bank holiday' days, back to the Mark.

In the market, the DAX needs to clear 8000 for the bulls to be confident that this is not going to end badly..in a giant 'triple top'. 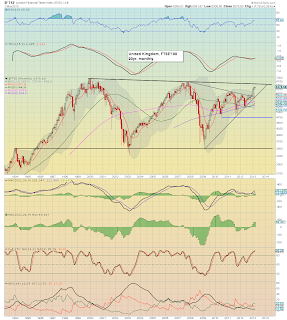 The basket case..that is the United Kingdom, where the market is rallying, despite the UK being back in recession for a third time.

Clearly, those green shoots are about to sprout again this spring. Or maybe that is just the printing machines at the BoE being spun up for the next round of QE? 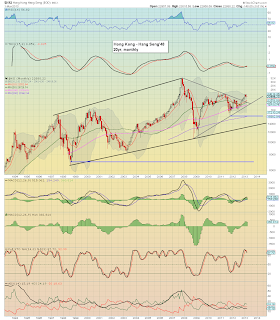 A clear break out of the down trend for the HK market, there is nothing bearish here. The Hang Seng needs to clear 26k for the bulls to be confident into the latter half of the year. 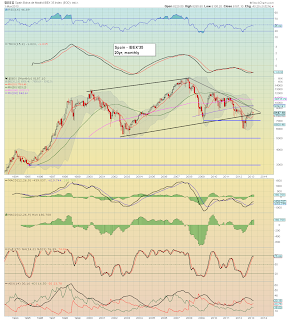 The one of the two ugly giant PIIGS, Spain remains a mess, and its market remains within a very broad downtrend. The IBEX needs to clear 9k, which is a good 10% higher, just to have any hope of achieving a breakout. It sure won't be easy. 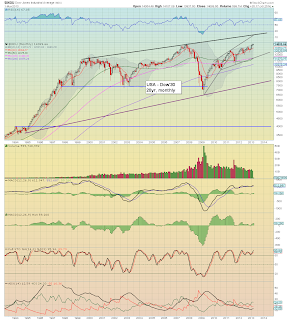 The mighty USA remains one of the strongest markets in the world. No doubt, this is at least partly due to the Fed throwing 85bn of new money at the financial markets each..and every month. Until the Bernanke ends QE, all dips are still likely going to be bought.

Best case downside for the doomer bears this year is somewhere around 12000/11500. That will be so difficult to achieve though, whilst the Fed is still meddling. 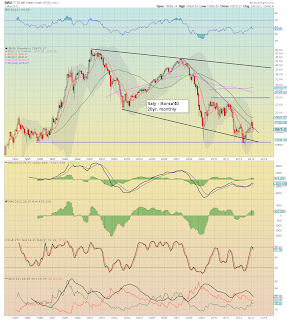 Italy is perhaps the most interesting market of all right now. It fell around 10% in February - largely due to the market getting spooked with the election results.

From a chart perspective, the Borsa is not exactly bullish. Any break <15k, and there is a real problem here, and danger of breaking 12500..at which point there is empty air to the next psy' level of 10k, 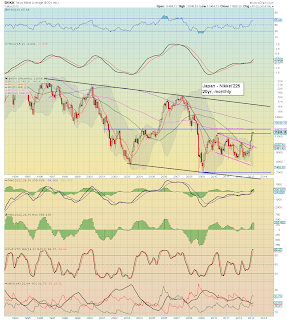 The demographic mess that is Japan has decided to go for the 'lets devalue our currency to oblivion' route You can see how the Nikkei has soared since the even more overt policy has been ramped up since the start of the year.

Clearly, nothing bearish here. The head of the JCB is walking a fine line here though. Things could spiral outta control, and then the bond market would be in danger of imploding. 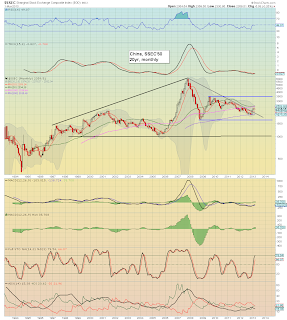 A clear breakout is still holding. First upside target is 2600, and then 3500. China remains very dubious though, not least in its 'official' econ-data. I don't think even the China leadership have much idea how much of the data is real or not.

Generally, things remain broadly bullish. The very large ramp from the summer 2012 lows is holding. Yes, there are some minor signs of a rollover starting, but with the USA, UK, and Japan markets still cruising comfortably higher, there really isn't anything significantly bearish at all.

There are potential 'triple tops' viable for many indexes in the coming months, not least of which would be the USA and German markets. As things are, the doomer bears really can't expect more than a 20% correction in the coming months..before the next bounce.

As is always the case, if there is a decline..and a bounce, the key issue will be..does the bounce put in a lower high.

Next week will be all about the monthly jobs report - out on Friday. Mr Market is expecting 171k net gains, with 7.8% (down from 7.9%) headline rate. That doesn't seem to be too high a number,  and I'm guessing it will come in 'better than expected'.

On that basis, I won't be short for some weeks to come, and if the intra-day action looks okay, I'll be looking to take a 'minor' long index position. My upside target zone remains sp'1550/60. I suppose 1600s are possible, but that will be difficult..even with the Fed POMO dollars.

This remains one primary count/idea I am keeping in mind... 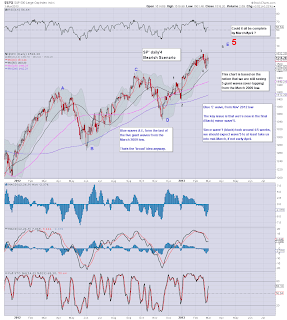 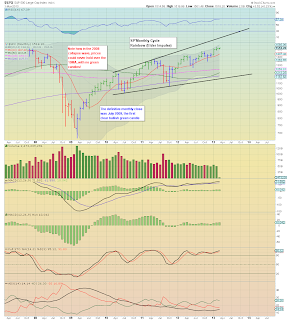 Finally, let me say all comments are always welcome. Its good to hear from some of you out there. I am always learning from the many hundreds of other chartists, and I hope I am adding something useful too.

back on Monday :)
Posted by Trading Sunset at 20:39:00
Email ThisBlogThis!Share to TwitterShare to FacebookShare to Pinterest

The main indexes closed the week on a moderately bullish note. This is especially impressive considering the USD has climbed into the mid 82s.  With the VIX seemingly now starting another multi-week period of decline, the bulls should be reasonably confident about March. 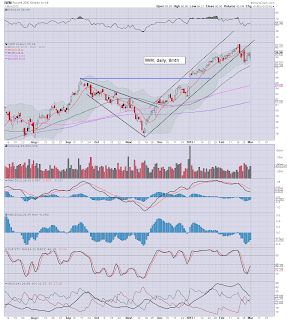 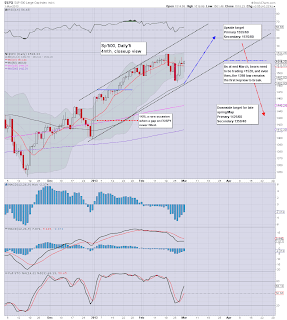 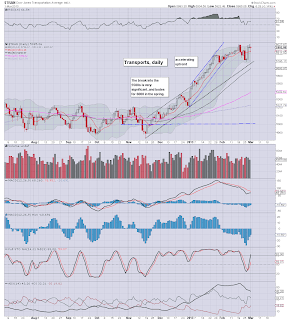 A choppy day to end the week, and there is no doubt..the bulls can claim it as yet another victory.

Underlying MACD (blue bar histogram) cycle ticked higher for a third day. We could easily tick higher for another week or two..and that will comfortably get the market into mid March.

That's all for today..and the week.