With the uncertainty of a fiercely contested election out of the way, US equities are powering upward. The sp'500 is currently net higher for November by 38pts (1.8%) @ 2164. With the Dow already breaking a new historic high of 18873, other indexes can be expected to follow in the weeks and months ahead. 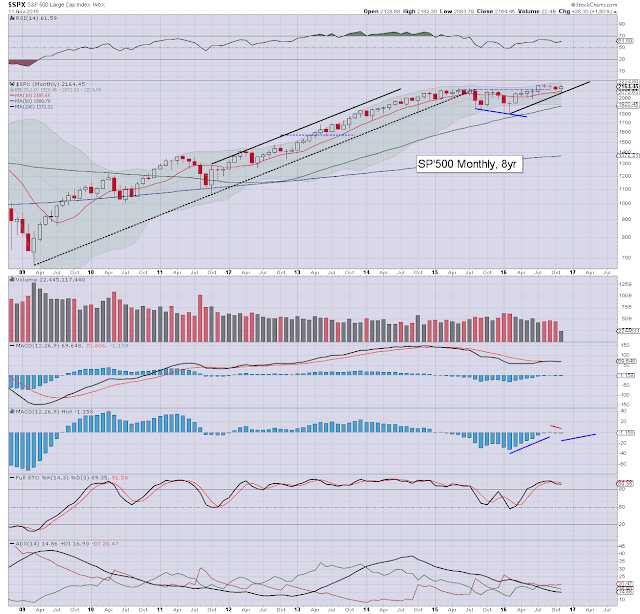 Underlying MACD (blue bar histogram) cycle remains fractionally negative, but will surely turn positive.. whether by end month, or at the December open. The key 10MA is currently at 2105, with the market due to settle November well above it. In theory, there is a viable 'easy upside' of 4-6 months.

Best guess: the 2200s, certainly before year end, even as the fed will raise rates in mid Dec'. The 2300s look out of range until the new year, as the upper bollinger is only offering the 2220s in the near term.

Equity bears now have to see the 2083 low broken before having any degree of audacity to call for anything lower. 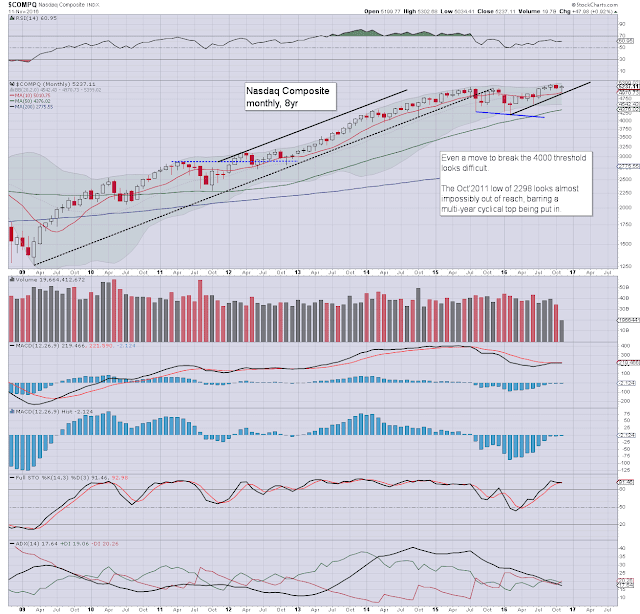 The tech saw a low this week of 5034, and indeed, the giant psy' level of 5K is powerful support. With the mainstream shock at the election of Trump, equity bears had their best chance to break significantly lower... but failed. The current net gain of 0.9% is minor, but its notable that the Nasdaq is only 2% below the Sept' high of 5342. The 6000s remain on the menu in the mid term. 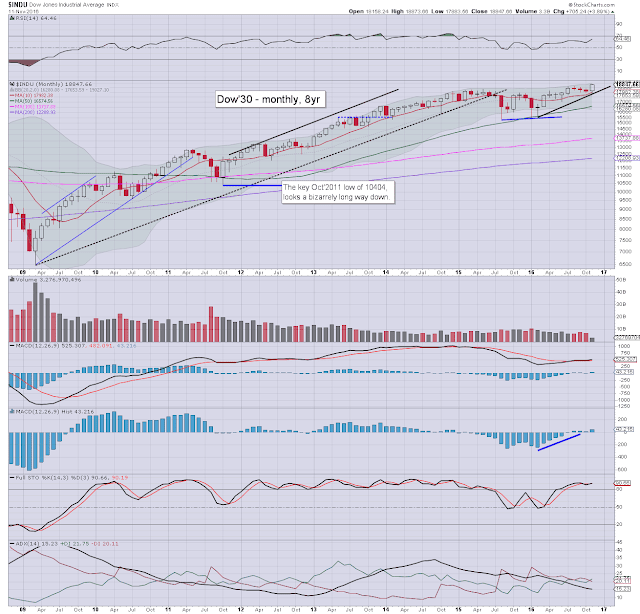 The mighty Dow saw some prints of -800pts in the 17500s overnight Tue/Wed, but there was a massive hyper-rebound, and the Dow has already broken a new historic high of 18873. The 19000s are clearly coming. By default, any price action >19k offers a straight run to the giant psy' level of 20k, certainly no later than April/May 2017. 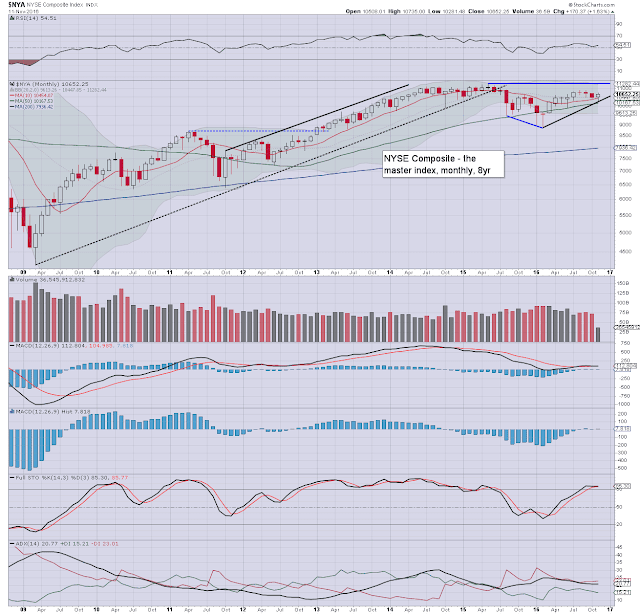 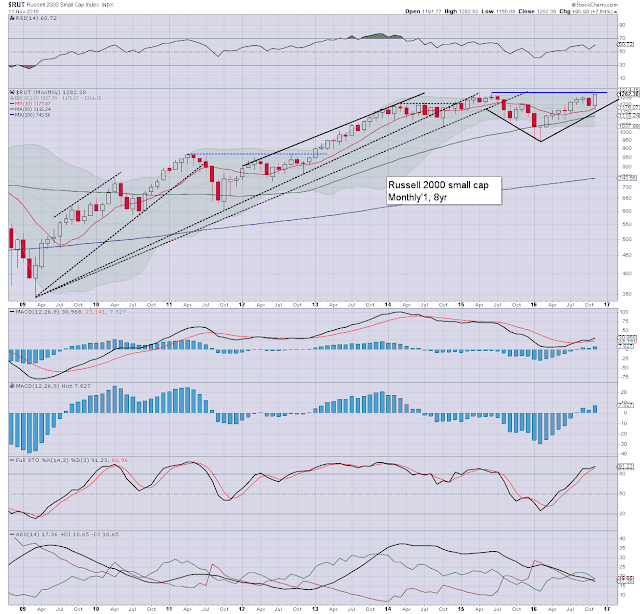 The second market leader - R2K, is racing upward, currently +7.6% for the month. The Friday close of 1282 is a mere 14pts from the 2015 high. The 1300s now look imminent. Underlying price momentum continues to strengthen. 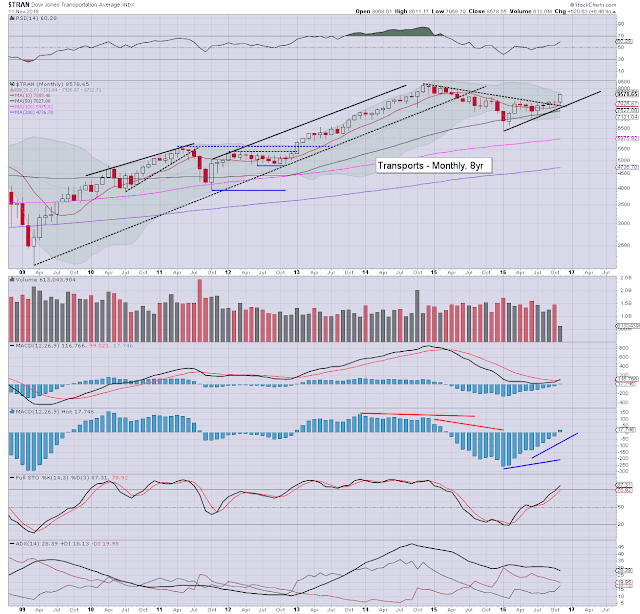 US equities have seen a choppy down wave from Aug/Sept' come to an end, with an overnight election washout, and subsequent hyper-rebound.

The Dow is leading the charge higher, with the R2K, SP', and Nasdaq comp', set to break new historic highs in the near term.

With the great uncertainty of the election out of the way, all that is left for the market to deal with this year is a fed rate rise. That is arguably already fully priced in.

The first 'normal' week in around a month. Earnings are largely done, and the market will be back to focusing on econ-data and what the maniacs at the fed say.

*there are 13 scheduled appearances due from the officials at PRINT central. No doubt, some of them will be overtly hinting at the Dec'14th rate increase.


--
If you value my postings here, you can support me via a subscription, which will also give you access to my continued intraday posts @ permabeardoomster.com.

*the next post on this page will (probably) appear Monday @ 7pm EST.
Posted by Trading Sunset at 17:00:00
Email ThisBlogThis!Share to TwitterShare to FacebookShare to Pinterest

A powerful week for the equity bulls 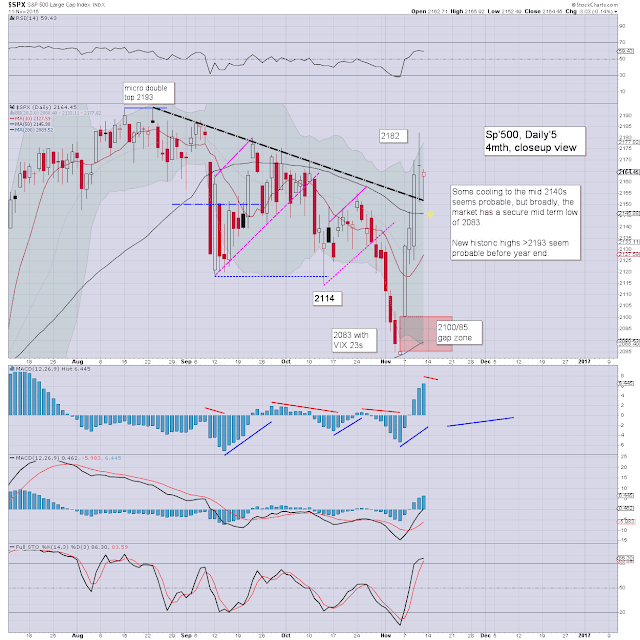 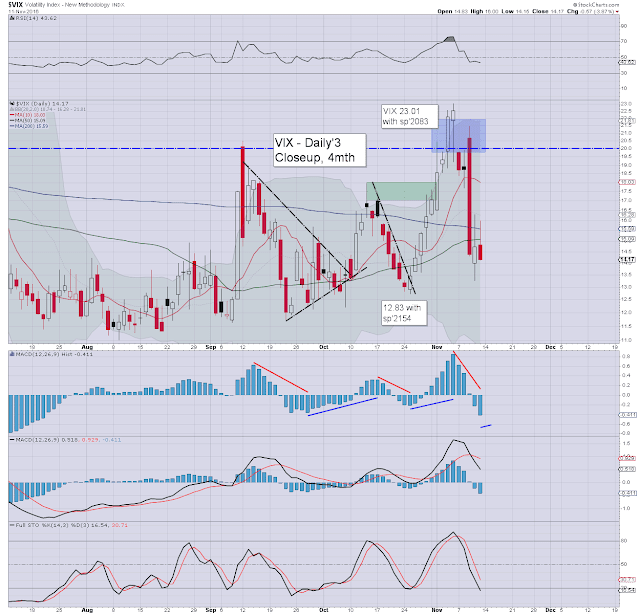 A day of moderate chop, although there was some notable strength in the R2K, which came to within nearly 1% of breaking the 2015 high of 1296. 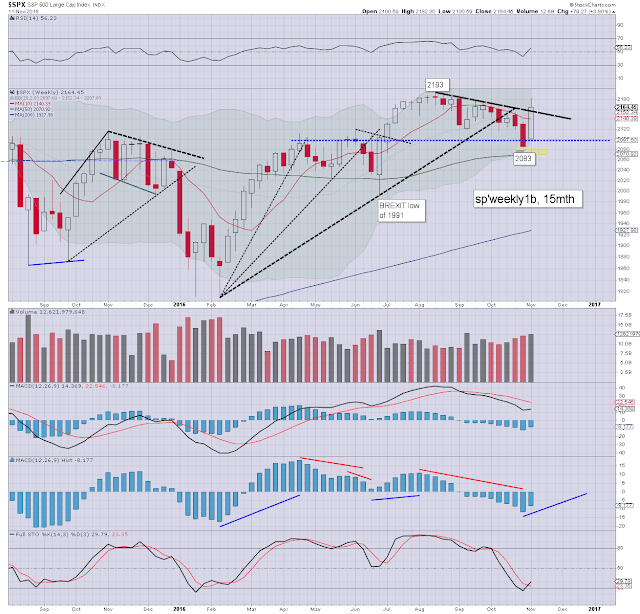 The gradual choppy cooling from the August high of sp'2193 has decisively ended. We have a key mid term low of 2083. With the Dow already breaking a new historic high in the 18800s, the sp'500.. and other indexes can be expected to follow.

Goodnight from London
--
*the weekend post will be on the US monthly indexes
Posted by Trading Sunset at 00:00:00
Email ThisBlogThis!Share to TwitterShare to FacebookShare to Pinterest
Newer Posts Older Posts Home
Subscribe to: Posts (Atom)