World equities are continuing to broadly climb. It remains especially incredible that the economically weak EU PIIGS are seeing the strongest gains. There would appear to be a further 4-6 months of upside, before the next intermediate multi-month down wave. 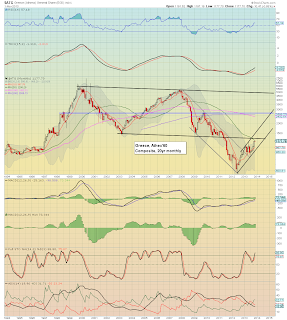 The Greek index is making a second attempt (the first was in May) to break key resistance in the 1200s. If the Athex can get a monthly close in the 1300s, that should be enough to clarify that a further doubling up to the 2400/2500 zone - is viable in 2015. 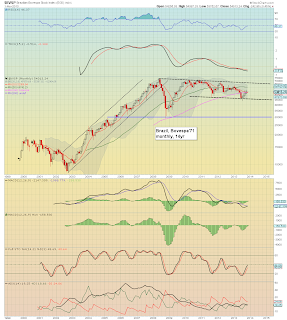 The Bovespa is continuing to battle higher from the summer lows. Equity bulls need 57k to open up the much more significant 65/67 level. Equity bears need a clear break <45k to have any confidence of underlying weakness. 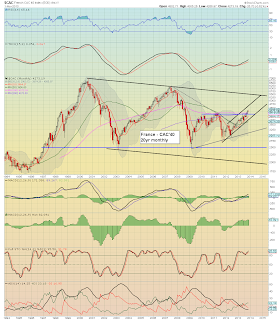 The CAC is holding over key resistance, and looks set for the 5200s next year. The big 5k level is viable as early as May/June. 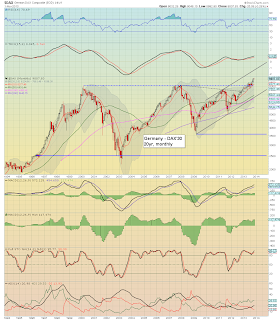 Like the US Dow, the German DAX is in uncharted territory. There really isn't any ceiling. The next obvious target for equity bulls is the 10k psy' level. That seems very viable by late spring 2014. 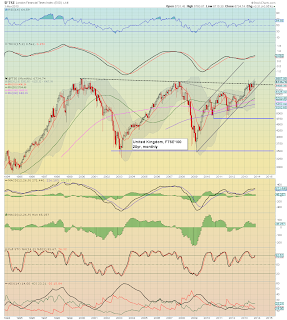 The FTSE needs to clear the Dec'1999 high of 6950. That is only 215pts higher, a mere 3%. Certainly, that looks viable within the next few months. A monthly close in the 7000s will clarify the global equity ramp remains on course. 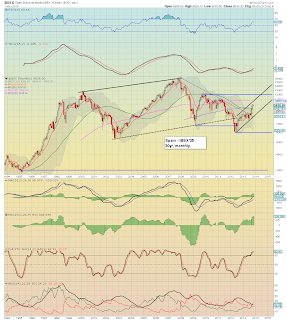 The Spanish IBEX looks set to break the 10k level within weeks, and that will open up another 20% higher by mid 2014. Indeed, it remains ironic that the economic disaster zone that is Spain (second only to Greece), is seeing its domestic equity market continue to ramp. 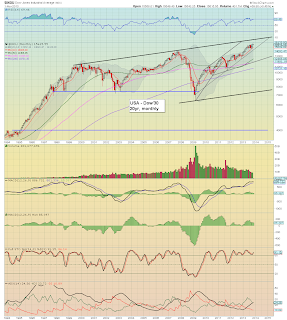 The mighty Dow continues to battle higher, and looks set to break into the 16000s before year end. By late spring 2014, Dow will probably be in the 17000s. 18k looks out of reach in the current multi-month wave. I would expect an intermediate drop of 20% in summer/autumn 2014, taking the Dow down to the 14000s..before a final massive ramp across much of 2015. 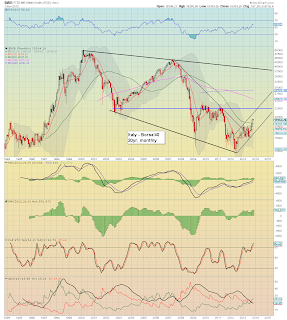 The Italian Borsa looks set to break >20k within a few months, there is clear resistance in the 21-23000 zone next spring/summer. 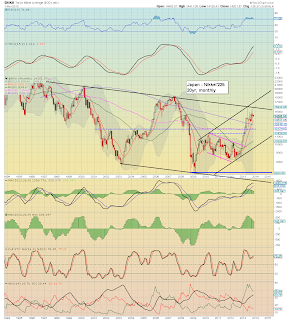 For those equity bulls seeking broad upside for another year or two, it will be critical to see the Nikkei to achieve a monthly close in the 16000s. That will break the declining trend/resistance that spans over TWO decades. If that is achieved, 18k should quickly follow, and then 20k sometime in 2014. 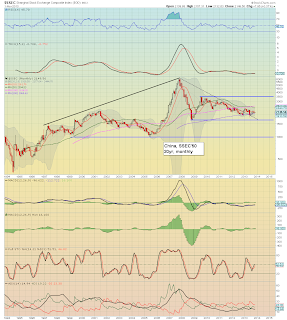 The Chinese market remains within a very tight range, and looks primed for a snap higher. A monthly close of 2500 will open up a further climb to 3500 by late 2015, which would be a gain of 60% from current levels.

The significant gains seen in October absolutely confirmed the strength of September. The world equity markets are all rising to some extent. Even China and Japan are still somewhat higher than the summer lows.

The powerful gains seen in in the EU PIIGS of Greece, Spain, and Italy is truly remarkable. Whatever reason you might like to attribute to such gains...what is clear..the trend is clearly upward. The gains have been so strong, even a fall of 15/20% would do little to dent the primary up trend from the lows of summer 2012.


Weaker USD will add to upside pressure in equities

The USD saw a very significant break lower in September, and remains weak, with the third red candle, after the two blue warning candles of July/August. 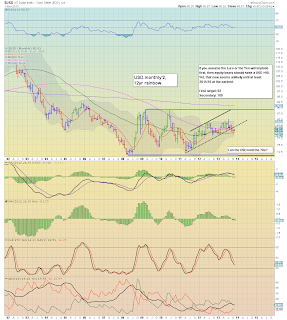 Unquestionably, any further weakness in the USD into early 2014 will only add to the woes of the equity bears. All $ denominated assets will be pressured higher, not least of which will be equities. There looks to be easy downside to the 78.50 level,  As things are, I'm highly suspicious of a fall to the 76s, even 75s. If that is the case, US markets will surely be trading much higher, with the sp' in the 2000s.

Next week has a fair few pieces of econ-data. Most notable, Oct' monthly jobs data - market is expecting 120k gains, with a static rate of 7.3%. Those seem very low end targets, and should be hit.

Across the entire week, there appears to be a mass of Fed' officials due to speak, so expect daily market moves with each press release. That will certainly help to create some intraday swings.

*There will be VERY heavy amounts of QE-pomo, especially on Mon', Wed', and Friday.
--


Santa and the Green shoots of spring

As a few are starting to note, the market is now moving into what is traditionally the stronger period of the year. We have the run into the Christmas holiday period, followed by the spring.

With continuing QE, I simply can't see any significant multi-month down wave until at least late spring/early summer 2014. So, for the doomer bears out there, we're talking about a good 4-6 months more to wait.

I will be here for the next major wave lower...I hope that many of you out there who are fixated on the downside (which I sure can relate to) have the patience to wait until the spring.

back on Monday :)
Posted by Trading Sunset at 18:48:00
Email ThisBlogThis!Share to TwitterShare to FacebookShare to Pinterest

Another week of a QE fuelled market

The US market ended the week on a slightly positive note, with the sp'500 settling at 1761. There remains very strong underlying upward pressure, and the sp'1800s look very likely by the end of this month. 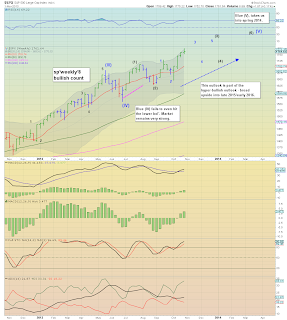 The weekly 'rainbow' chart managed the fourth consecutive green candle. There is simply nothing bearish here, and as I feared, there looks to be considerable upside potential into year end.

However you want to count this nonsense, the primary trend is clearly to the upside, and in many ways..until we take out the June low of 1560, the bears really can't get confident about anything. That is of course a huge 200pts lower..

Anyone dare think the 1500s are viable any time soon? I sure don't, and I am guessing we won't even go below sp'1700 for the rest of this year.

For the remaining doomer bears out there, late spring 2014 -which is when I believe we'll see an intermediate top, feels like a very long time away.

*next main post, late Saturday, on the World monthly indexes.
Posted by Trading Sunset at 03:00:00
Email ThisBlogThis!Share to TwitterShare to FacebookShare to Pinterest

The main indexes closed generally higher, with the sp +5pts @ 1761. The two leaders - Trans/R2K, closed +1.0% and -0.4% respectively. There is clearly some distinct weakness in the market since the strong ramp from sp'1646. However, a break <1700 looks unlikely in the near term. 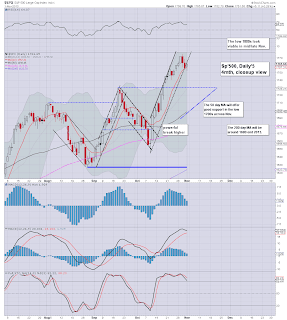 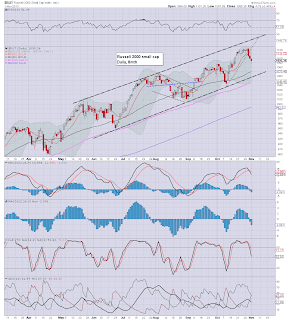 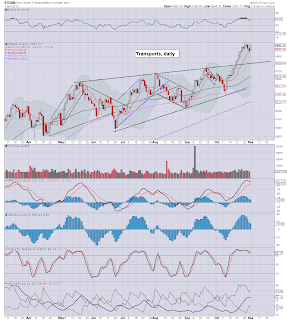 A rather subdued end to the week for the US market, with equities seeing some minor chop, but managing to build gains in the late afternoon.

Most notable was the 1% gain in the Transports, coming close to breaking a new high!

Underlying price momentum is however gradually swinging back to the equity bears, although I'm guessing the 1730s will be about as low as we can go..before the next wave higher into the low sp'1800s
--