With the main indexes seeing some moderate gains, market volatility is back on the slide, with the VIX -6.4% @ 15.54. The black-fail daily candle of Monday has been confirmed, and a move to the low 14s is viable as early as later this week. 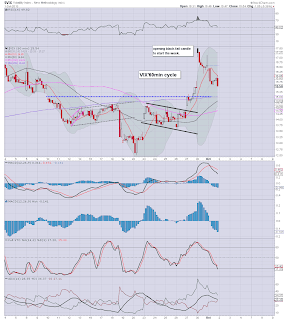 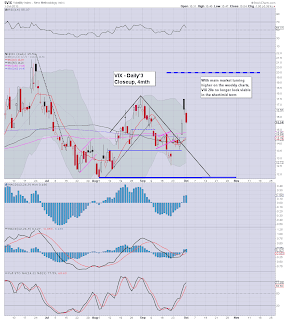 One thing is indeed clear, yesterdays daily candle (and indeed opening hourly candle) were both real warnings to the equity bears that the market has likely put in a floor at sp'1674.99..with a VIX spike high of 17.49.

All those expecting VIX in the 20s - on the basis of a US govt' shutdown, are clearly utterly bemused at the past two days. I really understand, but its not like we've not seen the market react this way before.

The main indexes all closed higher, with the sp' +13pts @ 1695. The two leaders - Trans/R2K, are leading the way, rising 1.4% and 1.3% respectively. With a fair few bullish breaks this morning, it would seem the market has concluded its down trend. 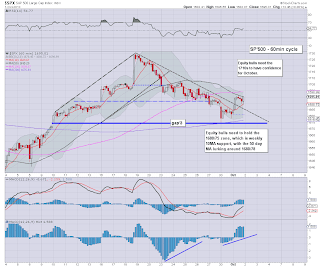 So...we have a clear break of the declining trend/resistance, and the close in the mid sp'1690s is arguably more than enough to clarify a trend change.

When you consider the Trans/R2K - which are the leaders, with both indicating continued underlying strength.

*I remain in an underwater long position (from a week ago in the sp'1710s), but considering the bigger weekly trends..it should turn out okay.
--

3pm update - rally into the close?

The smaller 5/15min index cycles have seen a little afternoon washout, and with one hour left, the market is set for another micro up wave. Equity bulls should be content with any close in the sp'1690s. Precious metals remain very weak, with Gold -$36 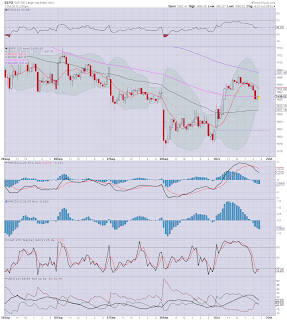 A bit of a noisy afternoon in market land. The little down wave will have no doubt concerned some of the bulls, but really...the breakout did occur, and the weekly charts will close the day outright bullish..if sp'1693 or higher.

Here is one to typify the market we have... 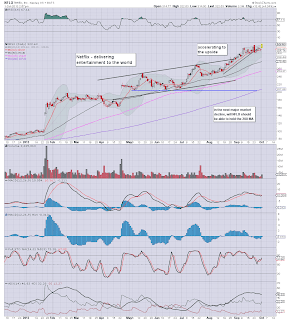 3.13pm..market wants to close in the 1690s. Bears are getting the chance to exit ahead of what will likely be much higher levels across the rest of the week. 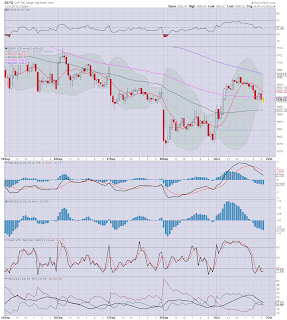 ....especially early tomorrow. Maybe we can test 1710 by late tomorrow.

3.50pm..here are the 1692s ! ramp time..probably.
Posted by Trading Sunset at 19:53:00
Email ThisBlogThis!Share to TwitterShare to FacebookShare to Pinterest

Whilst the headline indexes are battling to hold the earlier gains in the sp'1690s, the two leaders - Trans/R2K, are showing much more clearly, the new trend. The R2K has already broken new historic highs, and the 1100s look viable within days. Metals remain much lower, with Gold -$40 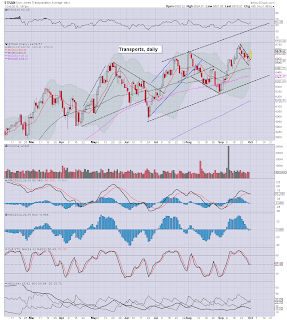 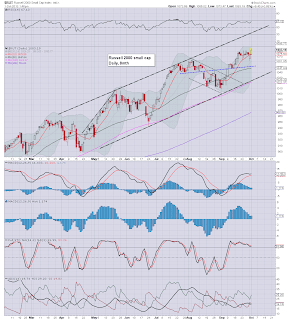 I think its a case of ignore the minor afternoon price-chop noise, and follow the leaders. Trans' has an especially clear bull flag..which is being confirmed with today's break higher.
-


2.20pm.. minor down cycle - which is a simply bull flag on the hourly charts.

A close in the 1690s will easily suffice to clarify the turn.
--

2.32pm.. today.. good example...little afternoon wash out..weak bulls out, and (probably soon) the bear chasers about to get short-stopped as we move back upward into the close.

micro 5/15min cycles should not be floored within this hour.
Posted by Trading Sunset at 18:52:00
Email ThisBlogThis!Share to TwitterShare to FacebookShare to Pinterest

The main indexes are holding above the earlier breakout, and the sp' could easily close in the 1700s. Precious metals remain under severe pressure, with Gold -$43. Oil is weak, -0.9%, with the VIX -5% in the 15s. 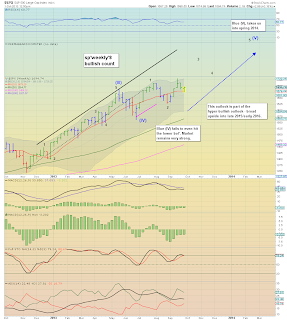 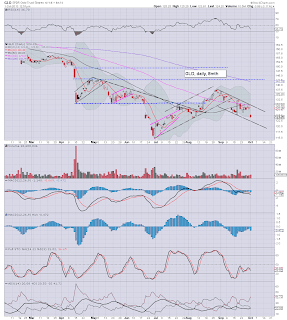 Bears should be arguably waving the white flag, not least with the weekly/monthly charts offering significant upside into the 1750/75 zone later this month.
-

I remain long...am underwater, but trying to be give this market the time it needs to push to new highs.
Posted by Trading Sunset at 17:56:00
Email ThisBlogThis!Share to TwitterShare to FacebookShare to Pinterest

The main indexes are breaking out, and confirming some of the initial bullish signals seen yesterday. The sp' could close in the 1700s today, which will no doubt bemuse the mainstream. Metals remain severely lower, Gold -$36. Oil is weak, -0.9% VIX can no longer hold the 16s. 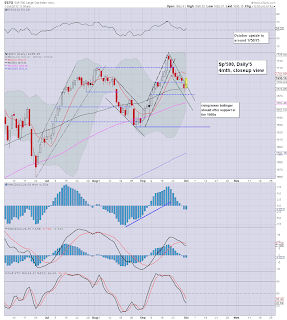 The above chart is really all that is needed to show what has happened this morning.
--

However, since it is a new month, the bigger monthly charts are important to keep in mind. 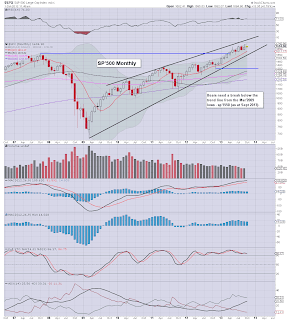 The upper bollinger on the sp' has jumped into the 1740s.

time for tea!
Posted by Trading Sunset at 16:51:00
Email ThisBlogThis!Share to TwitterShare to FacebookShare to Pinterest

11am update - weekly charts back to outright bullish

With the break back into the 1690s, the bigger weekly charts are flipping back to outright bullish. Precious metals remain under severe downside pressure, with Gold -$40. VIX is reflecting a market that realises a temporary shutdown is not actually important, -4% in the 15.90s. 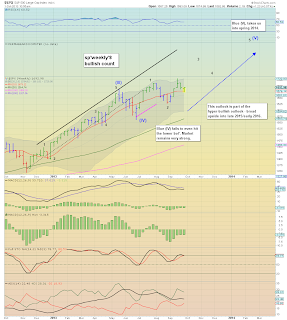 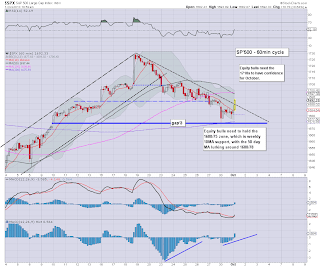 There are a LOT of bullish signals right now. Of course, equity bulls should be looking for a daily close at..or above current levels to confirm this is not just a fake out. .
--

A twisted world indeed.
Posted by Trading Sunset at 15:56:00
Email ThisBlogThis!Share to TwitterShare to FacebookShare to Pinterest

Despite part of the US Govt' shutdown, the main indexes are seeing a slight rally. Much more importantly though, the underlying momentum is starting to turn back to the bulls, with the Trans/R2K leading the way. Precious metals are seeing rather severe drops, with Gold -$31. Oil is -0.6%. 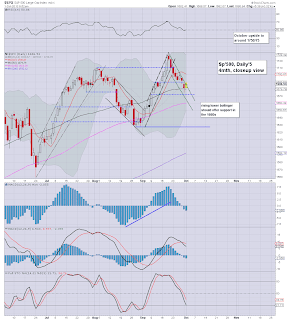 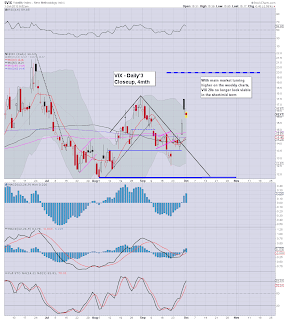 Without getting too focused on the smaller cycles, I think an update on the daily charts is useful to start the day.

First..the VIX black candle of yesterday is being confirmed..and VIX has already broken into the 15s.
Second, the sp' is starting to break the down trend/channel.
--

The big question I am wondering is whether the next wave higher can take out 1729..or put in a key 'marginally lower high'..before 'debt ceiling trouble'.

Despite what a few of you may think, I am keep all scenarios in mind, not least the importance of the debt ceiling. I just happen to think things will play out as they have for the past few years. 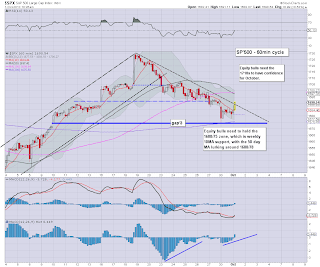 Bulls seizing control.
Posted by Trading Sunset at 14:54:00
Email ThisBlogThis!Share to TwitterShare to FacebookShare to Pinterest 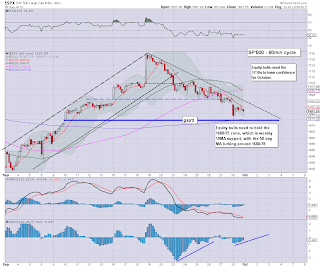 Despite the US Govt' seeing a limited (and no doubt) temporary shutdown, the market is indeed not crashing, and the likely opening gains are indeed somewhat ironic.

I'm not yet aware of why the metals are getting smashed, but then, the mid-term trend is still to the downside, and I'm looking for a good 30% lower on Gold, and 50/60% off Silver. Those are crazy bold targets I realise, but I'm pretty confident on them, before the next grand multi-year wave higher.

--
Equity bulls should be seeking a break into the 1690s..and a daily positive close, would probably help to start a new multi-week up wave.

September was a clear break of the trend from 2011, the obvious now is whether the 70s will hold across the next year or two.

Does the Fed want to kill the dollar, and help to kick up asset prices that way?


9.41am... a lot of the reversal candles from yesterday are being confirmed...see stocks like F, UAL.

The Trans/R2K are breaking higher...

The sp' is trying to break out of the recent down trend (bull flag?).

--
Posted by Trading Sunset at 13:39:00
Email ThisBlogThis!Share to TwitterShare to FacebookShare to Pinterest

Time for another quarter 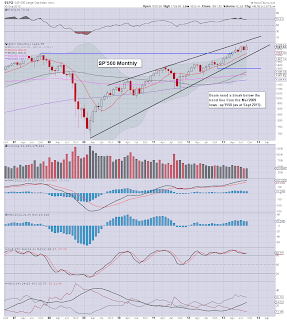 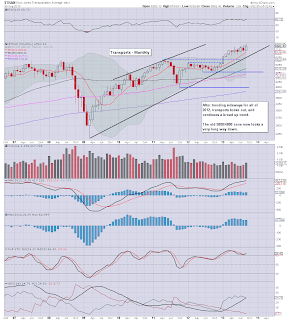 I continue to read around so many great chartists/blogs, a fair few of which are looking for much lower equity levels this Oct/November, but really, I just can't see it occurring.

QE continues, and once this US Govt' shutdown (and the subsequent debt ceiling) issues are out of the way, there is very little reason why the market won't be able to resume..if not even accelerate the upward trend into spring 2014. If that sounds hyper-bullish...its because it is.

Despite the post FOMC price action being moderately weak, the monthly charts most certainly closed the month pretty bullish. The monthly rainbow chart closed with a blue candle on the sp'500, and that's the third one out of the past four months. 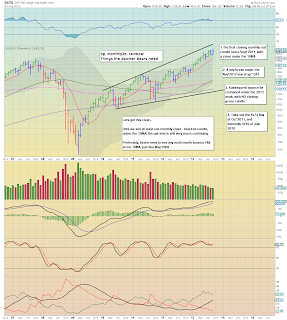 The monthly blue candle closing is kinda interesting, but still, doomer bears need RED...blue is just not good enough! Further, it remains important to recognise the support that the monthly 10MA offers, which at the Oct'1 open..will likely jump to around 1610.

There is ISM manu' and construction data tomorrow, although clearly, Mr Market will be more focused on what is happening on Capitol Hill.

The bears have been smashed around by the bulls for the past two years..and we're around 60% higher since then. Yes, there are serious macro-econ problems out there, but for now..things look 'contained'. I wish I could believe otherwise.
--

The main indexes closed lower, but certainly not 'significantly', with the sp -10pts @ 1681. Near term trend remains moderately bearish, but once the current down cycle completes, equity bears had better find the exit door...fast! VIX reflected the slight market concern. 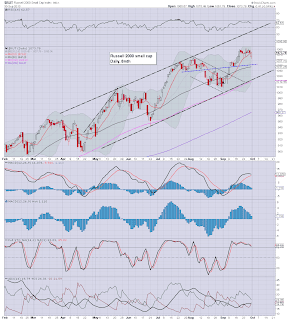 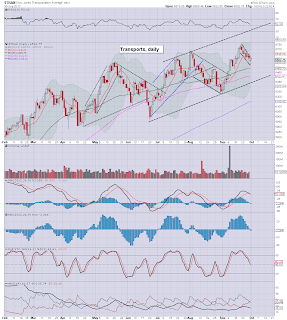 ..and the third quarter comes to an end.

The sp'500 has declined for 7 of the past 8 trading days, and I do understand why some are getting a little excited - if not arrogantly confident, of a major..if not severe downside wave in the coming month or two.

Yet..I just don't see it. I don't see the bears as having had any significant downside power in the past few months. Its taken the bears 8 days to break the market 50pts lower from the FOMC spike high of 1729. If you take the pre-FOMC spike, bears have managed a drop of just over 1%.

When you also consider the two market leaders - Trans/R2K, both of which closed today with reversal candles, I'm very concerned the market is viable to a VERY significant snap higher..with major multi-week up wave starting..at any point this week.

Yes, there is uncertainty with the looming US Govt' shutdown, but in the scheme of things, its simply not a very important issue.