Volatility gains for a second week

Despite equity indexes closing the week with moderate declines, the VIX still slipped into the Friday close, settling -2.4% @ 14.37. Across the week though, the VIX gained for a second consecutive week, with net gains of 7.2%. 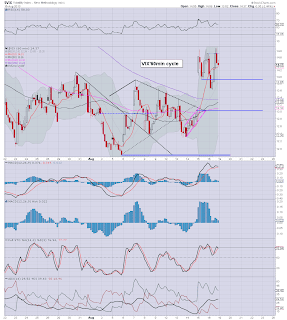 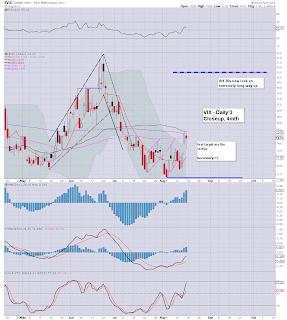 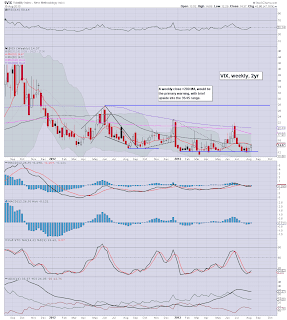 Despite the market declining a little more:  sp -5pts, the VIX still cooled down..

Arguably, VIX 11s look completely out of range for some 'weeks', and 12s will only be viable if the market can make a play into the sp'1690s again - which certainly won't be easy next week.


Two weeks does not make a trend..but its a start

For the equity 'doomer bears' out there, one of the most bearish aspects is that the VIX has actually managed to close with net gains for the second consecutive week. Sure, we're only in the low teens, but its a start..and 16/19s look viable within the next week or two.

Breaking into the VIX 20s though, that remains VERY difficult, and looks to only be briefly viable in the first half of September.
--

more later..on those weak indexes
Posted by Trading Sunset at 23:00:00
Email ThisBlogThis!Share to TwitterShare to FacebookShare to Pinterest

The main indexes mostly closed a touch lower, after a slight late afternoon micro rally. The broad trend remains weak, but a bounce next week into the sp'1680s looks very viable. Precious metals and Oil both closed with moderate gains. VIX closed around 2% lower in the low 14s. 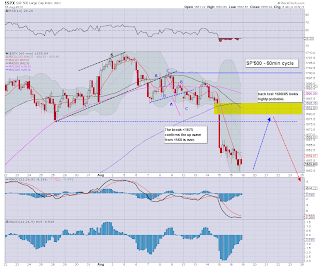 *bulls fail to clear the hourly 10MA. That keeps the door open to further downside, even as far as the 1630s, although I'm inclined against that. Bears still seem weak.
--

Certainly, today was a failure for the bulls, with further declines, and the sp' even broke below the daily 50MA of 1657.

This week was useful, if only in that the five week tight trading range is over. Downside into September is pretty secure now, somewhere down to the sp'1575/50 zone.

*next main post, late Saturday on the US weekly indexes
Posted by Trading Sunset at 21:00:00
Email ThisBlogThis!Share to TwitterShare to FacebookShare to Pinterest

The indexes are again trying to secure a floor, with the sp' having hit 1652. Bulls need an hourly closing candle above the 10MA..currently 1660. Precious metals holding gains, Gold +$12, with Oil similarly higher. VIX -1%, and looks likely to melt lower into the opex close. 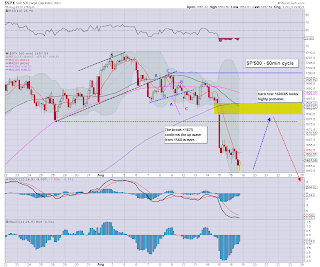 Look at MACD (blue bar histogram) cycle...inexorable battling back upward. Bulls have a real chance on Monday to kick this market back upward.
--

The bulls sure have struggled since Thursday morning, with the market set to close the week with net weekly declines of around 2%.
-

*upside target for a bounce early next week remains 1680/85....which now looks not viable until Tues/Wed.
-

*I remain on the sidelines across the weekend.
--

The main market remains moderately weak, but despite the declines, the bears look tired, that has seen the market slip from sp'1709 to 1653 across ten trading days. A bounce into the 1680s still looks likely. Gold is building gains, now +$8 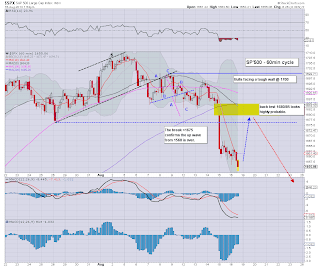 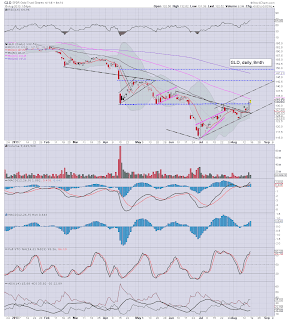 The 5/15min cycles look arguably floored, and we could easily battle higher into the close.

--
Certainly though, with just two hours left of the week, I don't think it merits 'getting involved'.

So..yours truly, is probably going to remain a watcher for another 2-3 days. Urghh

Gold +$14...only another $85/90 to go.
Posted by Trading Sunset at 18:55:00
Email ThisBlogThis!Share to TwitterShare to FacebookShare to Pinterest

The sp'500 is -3.5pts @ 1657, a mere 1pt from the morning low. Yet other indexes are not as closing to breaking new lows. Bears still look exhausted, and a recovery/bounce into the sp'1680s remains the target. Oil has lost its earlier gains, back to flat.  VIX is similarly off the lows, now -3% 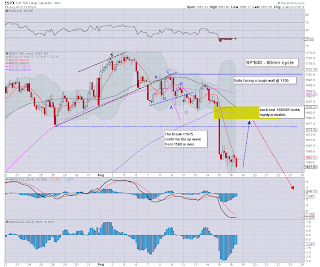 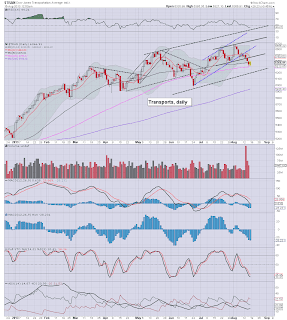 That is probably the key sign indicating the main market will hold up...and rally into Monday.
-

Certainly, there seems absolutely zero reason to be short across the weekend, not least for the options traders out there.

Tech and Transports are STILL positive on the day.
-

Oh well, at least I'm not long.  Always overly risky, whilst the bigger cycles are pushing lower.
-
Posted by Trading Sunset at 17:55:00
Email ThisBlogThis!Share to TwitterShare to FacebookShare to Pinterest

The market is pretty subdued, and clearly still in the process of building a floor for the recovery/bounce, back into the sp'1680s. Hourly index charts still suggestive of a leap higher this afternoon. Precious metals and Oil both building moderate gains. VIX -6% 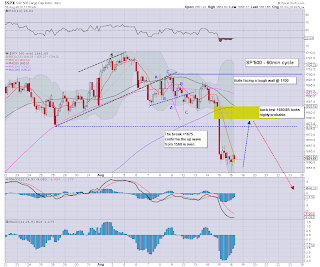 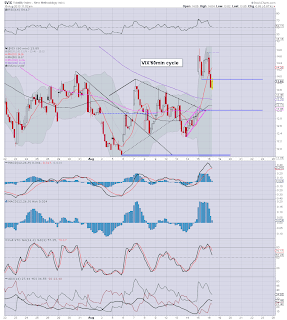 I holding to original outlook...seeking a significant wave lower into September.

The only issue is finding an acceptable entry point. Right now, no point shorting into the weekend..not least since we're not even in the 1680s yet.

time for lunch!
Posted by Trading Sunset at 16:53:00
Email ThisBlogThis!Share to TwitterShare to FacebookShare to Pinterest

11am update - setting up an afternoon jump

The market appears to be coiling up for a rebound to the upside. With a hit of the 50 day MA, the sp' looks set for higher levels into Monday, target is a somewhat obvious gap zone of 1680/85. VIX continues to cool down.. -6% in the 13.70s. 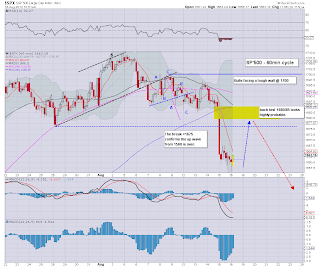 Well, the bears  had an extra opportunity to close out this morning.

Regardless, at least yesterdays move gave clarity to the mid-term.


At a minimum, the current downside target is 1560 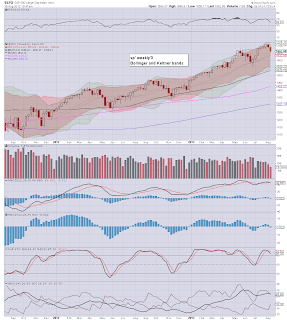 You can see why I'm looking for that kind of move.
Posted by Trading Sunset at 15:52:00
Email ThisBlogThis!Share to TwitterShare to FacebookShare to Pinterest

10am update - recovery into the weekend

The main indexes open a touch weaker, but the 50 day MA has held on the sp'500, and all things considered, the market looks set to battle back higher into the Friday opex close. Precious metals and Oil both building gains again. VIX is cooling down. 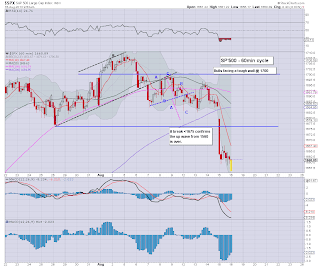 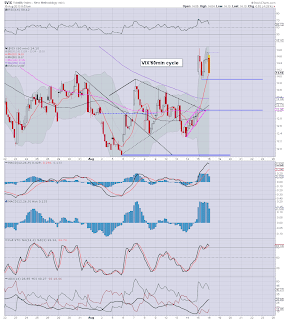 Market is very likely exhausted on the downside in the current multi-day cycle.

The only issue is how high do we bounce..and how many days.

Best guess..sp'1680s look very likely. The only issue is whether the bulls get yet another attempt to clear 1700.

Not that it should matter for the bears in the mid-term. I can't consider a new high viable until late October..at the earliest.


10.38am.. market still battling it out to hold a floor, but frankly, bears look done for a few days.

Overly risky to take a long position, but a lousy place to launch a new short.

For the moment, patience would seem the only conservative option.
Posted by Trading Sunset at 14:53:00
Email ThisBlogThis!Share to TwitterShare to FacebookShare to Pinterest

Good morning. Futures are flat..for just about everything. Sp'500 is set to open unchanged at 1661. Today is opex, and with $3bn of QE, the bears face something of a challenge to close the market lower. The obvious target is the 50 day MA, just a little lower @ 1656. 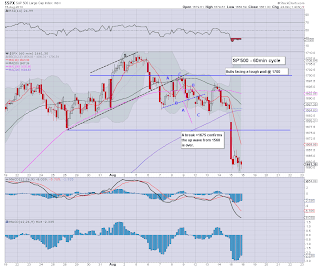 So... a flat open...and that will give everyone a chance to re-position.

Considering the last few trading hours, along with 5/15/60min MACD cycles that look floored, bears should probably have already exited, ahead of the weekend.

*I remain on the sidelines, and I don't expect to trade today either. Doesn't seem any point, with sig' risk of upside into the Friday close..and possible follow through early next week (to the upside).

Frankly, I'd only feel comfortable with a re-short in the sp'1680s or higher..and that sure doesn't seem likely for a few days.
-

If I could stomach it, I'd be going long now, but I can't.  Absolutely tired of this market.

Target upside remains the 1680s.
Posted by Trading Sunset at 13:35:00
Email ThisBlogThis!Share to TwitterShare to FacebookShare to Pinterest

Downside into the September FOMC

The main indexes finally picked a direction after trading within a 3% range for the past five weeks. With the market decisively breaking 1675, sp'1709 is now a confirmed top. The only issue is what happens after the current down wave concludes in September. 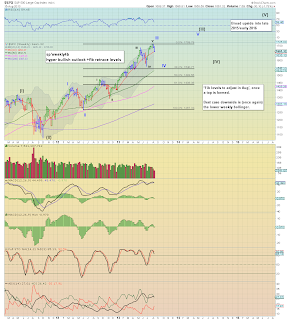 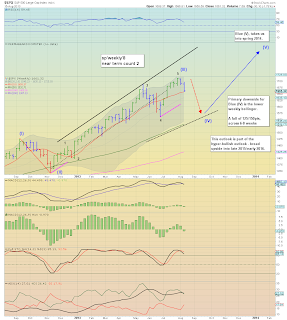 If there is one thing worse than losing money, its being on the sidelines, and not being involved.

I suppose I could have chased the open lower at sp'1670, but really, that goes against a core personal trading rule, never mind that the hourly MACD cycle was already low yesterday afternoon.

So..for yours truly, it was one of the most annoying days of the year so far. Tomorrow can only be worse, if we gap down another 1% or more. At which point, I'll probably turn off my screen until next week.


Downside into the next FOMC ?

The weekly charts are highly suggestive of downside into September, where we have the next FOMC announcement due on Sept'18.

If you consider that markets might unravel into that time, do you think there is a chance in hell that the Bernanke is going to start cutting QE? Hell no, in which case, the bounce from the FOMC is going to be fierce, probably 75-100pts.

That will get us right back into the mid 1600s, and then the ultimate issue will become apparent. Does the market put in a critical lower high...or does it just keep on rallying into spring 2014? Right now, that is utterly impossible to fathom, with late Sept/early October likely being a treacherous time for traders.

There is a trio of minor econ-data tomorrow - housing starts, productivity/costs, and consumer sentiment. If those come in at least 'reasonable', then the market will have an excuse to rally.

*there is sig' QE of around $3bn tomorrow. Although yes, I can hear the bears bitching that since Thursday closed lower - despite the earlier QE, that negates the previous four year link between QE and the rising US/World equity markets. Idiots.
-- 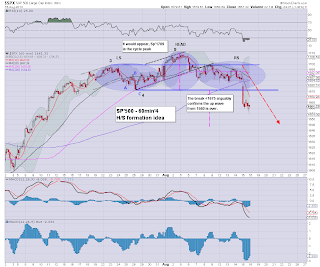 So...what the hell do I do next? Going long is out of the question, not least now that the old support of 1675 has been busted. The only issue is trying to find a decent short entry level, but what if we just keep on falling?

Those daily charts sure aren't offering any sign of a turn yet, and as some out there are suggesting, a move down to the 1630/20s is viable within a few days.

Goodnight.. from a frustrated London
Posted by Trading Sunset at 04:00:00
Email ThisBlogThis!Share to TwitterShare to FacebookShare to Pinterest

The main indexes all closed significantly lower, with the sp -1.4% @ 1661, a very decisive close under the old support floor of 1675. Near term trend looks weak - although a bounce briefly back into the 1680s is viable. Mid-term outlook is for downside to the sp'1575/50 zone by mid September. 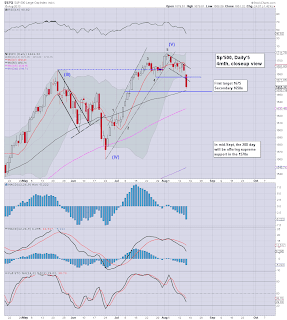 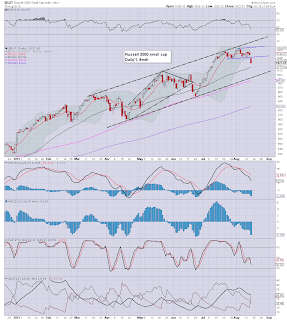 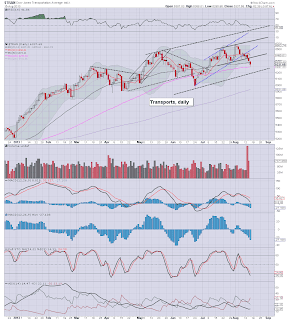 For the bears, it doesn't get any better. A straight forward gap right under the old support floor, and then just continued weakness across the day. Despite renewed attempts to rally after late morning, the bulls failed, with the market settling very close to the lows.

The only issue remains whether the bulls can stage a recovery bounce into opex/early next week, before a continuation downward.

Mid-term downside now seems relatively assured into September. The bigger wave count - even on the hyper-bullish outlook, is suggestive of sp' back in the 1500s.
-