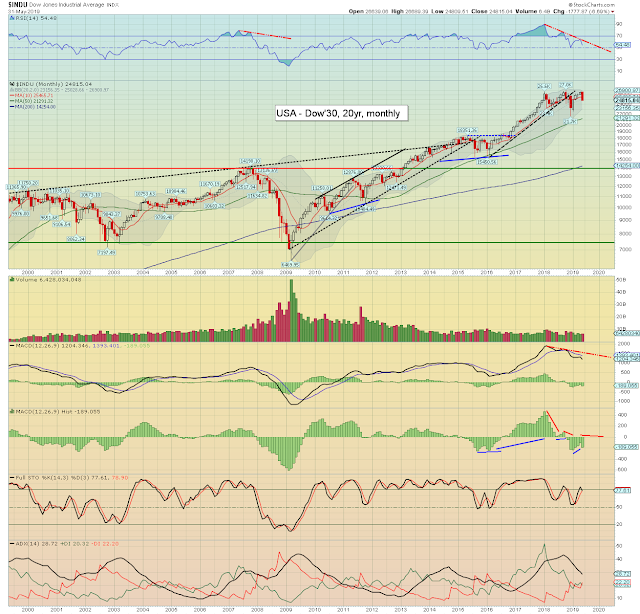 The mighty Dow settled lower by a powerful -1777pts (6.7%) to 24815, which was decisively under the key 10MA. Underlying macd (green bar histogram) cycle is ticking back lower, as price momentum remains negative, and is increasingly favouring the bears.

With a bearish monthly settlement under the 10MA, basic target is the lower monthly bollinger, currently at 23156 (6.7% to the downside), although that will jump/adjust slightly with next Monday's June 3rd open.

Note the monstrous technical divergence - such as RSI, which stretches back to Jan'2018. We have two lower highs, and a clear rollover toward the key 50 threshold. The outlook for the summer is bearish, and will only be negated if a monthly settlement back above the key 10MA.
-- 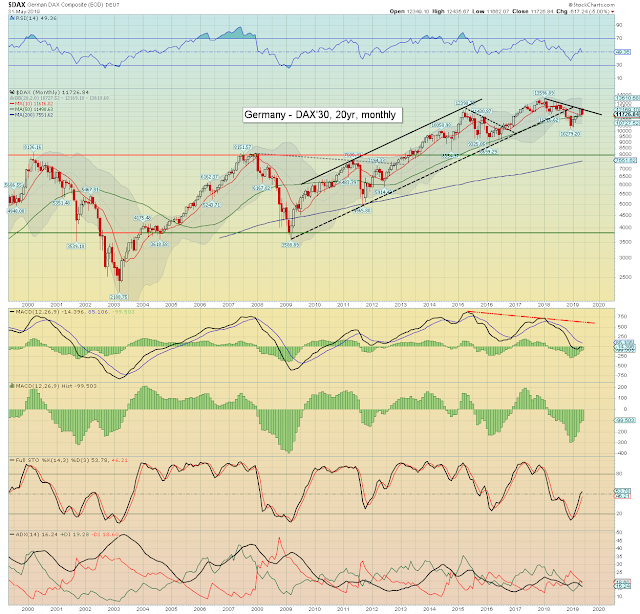 The economic powerhouse of the EU - Germany, saw the DAX print a May 3rd high of 12435, but then swung lower, settling -617pts (5.0%) to 11726. Note how the upper declining trend held as resistance, although the DAX did manage to settle just above the key 10MA. It can be argued multi-month price structure since Dec'2018 is a big bear flag. The more bearish will be seeking a back test of the old double top in the 8100s, and that is around 30% lower. 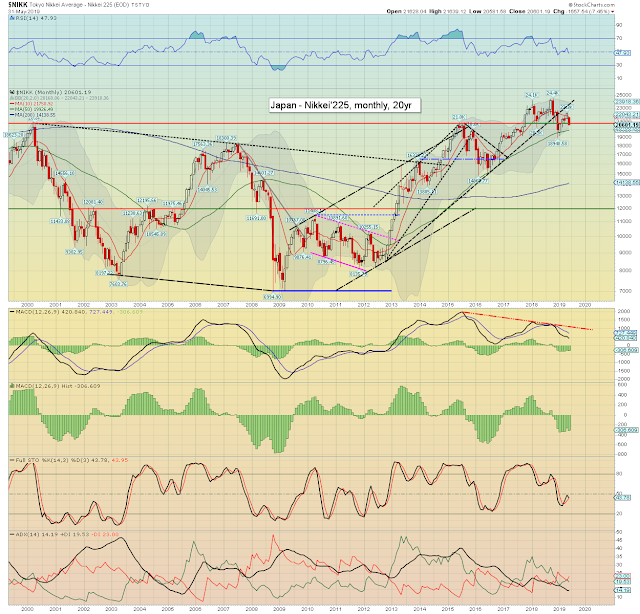 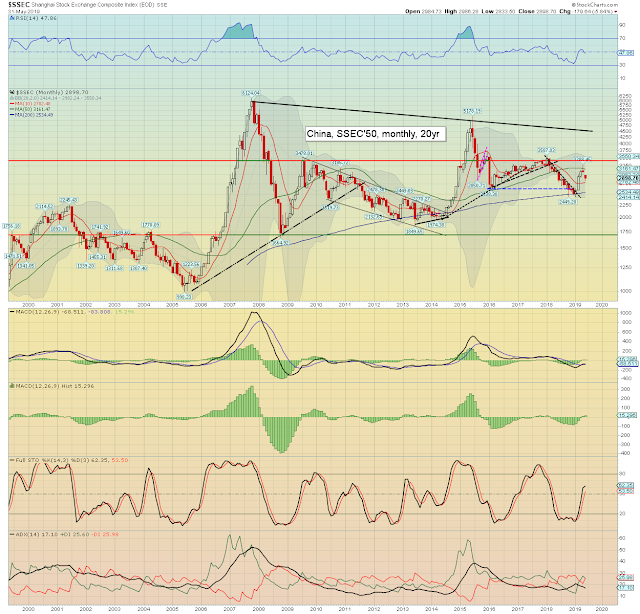 Chinese equities cooled for a second month, settling -179pts (5.8%) to 2898, although still above the 10MA. Monthly price momentum is fractionally positive. If the 2700s are broken under, the bolder bears could seek the 1700s. 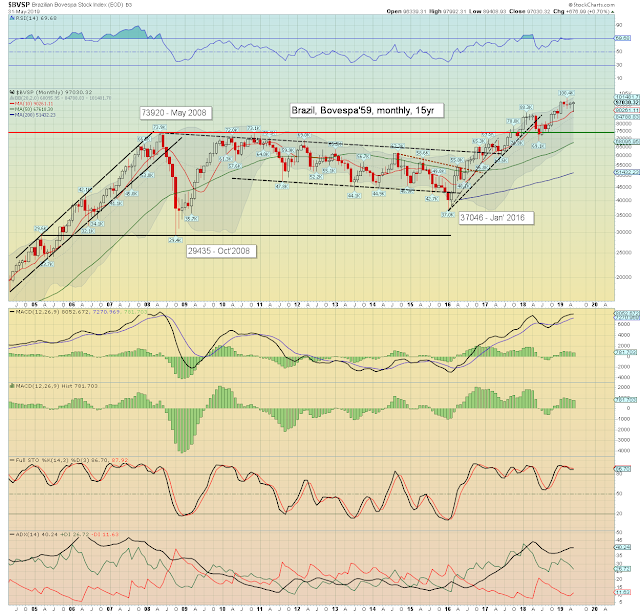 It was a mixed May in Brazil, seeing a low of 89408, but settling +677pts (0.7%) to 97030. The floor spike from around the 10MA is certainly something for the m/t Brazilian bulls to tout. A problem remains weak commodity prices. 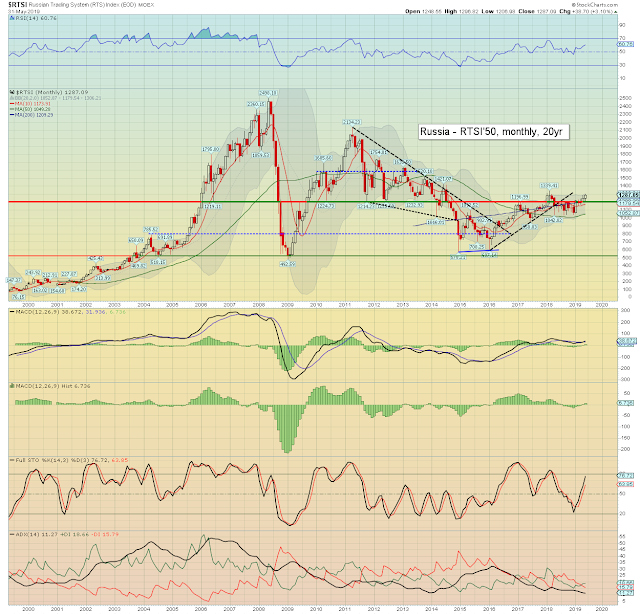 Russian equities climbed for the 4th month of 5, settling +38pts (3.1%) to 1287. The net May gain is especially impressive, considering weak energy prices. 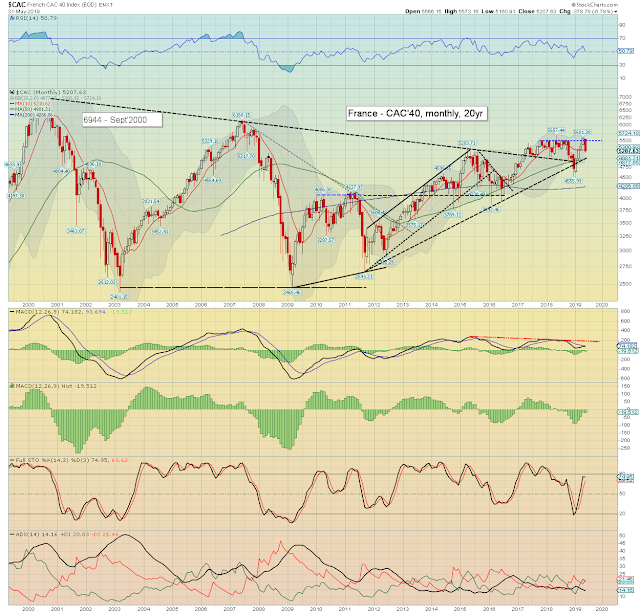 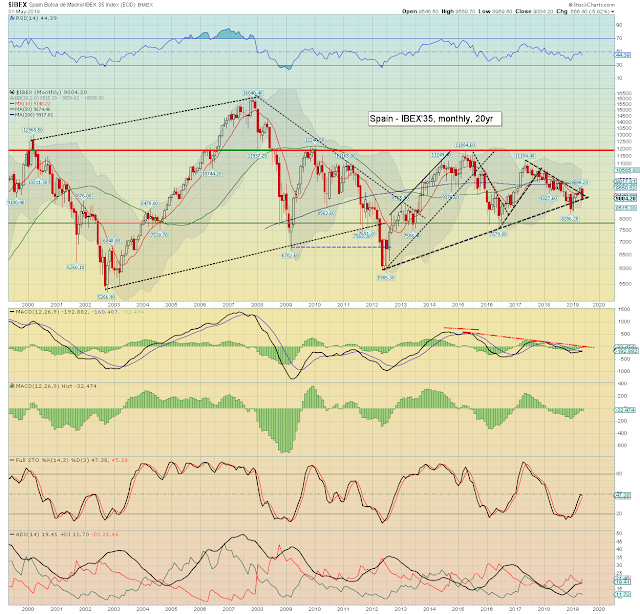 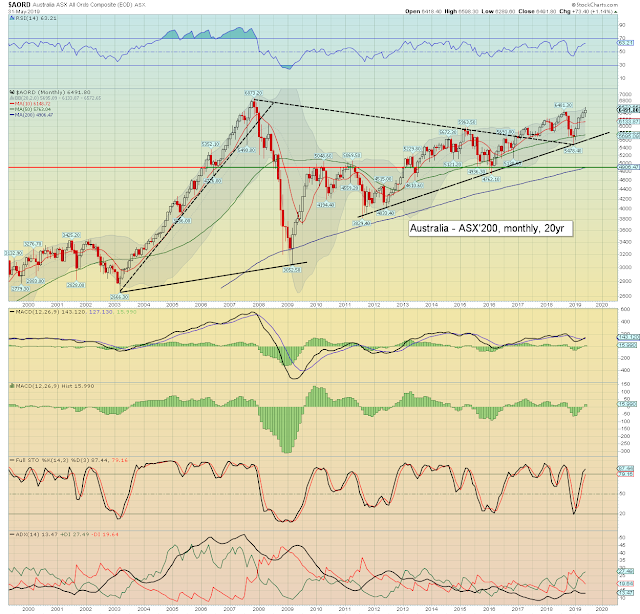 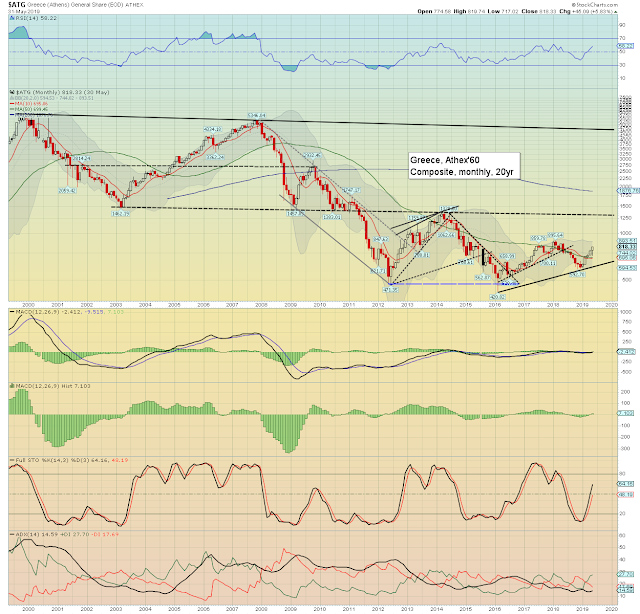 Greek equities climbed for a fifth consecutive month, settling +57pts (7.4%) to 830. Soft upside target would be the Jan'2018 high of 895, which looks viable in June. It could be argued recent gains are just a spurious multi-month bounce within a l/t trend of horror. Economically, nothing has changed, as the Greeks are monstrously indebted, kept afloat by the troika.
--

Six world markets were net lower for May, with four net higher.

Six world markets are trading above their monthly 10MA, with four below.

Special note, whilst the USA-Dow did not break a new historic high, the S&P 500 did, but with a settling bearish engulfing candle.
--

Key event: Mon-Wed', US President Trump will be on a state visit to the UK, which will no doubt garner very considerable mainstream coverage. We can expect a number of press conferences, with market moving tariff and trade related comments.

It is notable that UK PM May is in the process of being replaced, having chosen to resign, after not keeping her promise to exit the UK from the EU 'deal or no deal'. Right now Boris Johnson appears the likely successor. In terms of BREXIT, a parliamentary deal can be expected by late summer, and that will probably be accompanied with a 'people's confirmatory vote'. I would expect the UK populace to vote against ANY deal, and thus remain within the EU. Yours truly would be fine with the latter.

May ended on a pretty bearish note, although as I've detailed, some world markets actually saw net gains. The US/world economy is continuing to slow from late 2018. Whilst the US is still far from recession, the EU is already seeing some of its states (such as Italy) contracting.

QT is set to end this September. The only issue is when do the fed cut rates? In many ways, whether its July, September, or October, is arguably inconsequential. What matters is that such a rate cut is recognised as an equity sell signal.

Many would do well to stare at the following for a good hour...

If you think rate cuts are bullish for equities (other than an initial reaction), you don't know your market history. Perhaps the only unknown is whether the next rate cut cycle will see US rates turn negative.

Again, if you think that is crazy talk, I refer you to the ECB, who currently maintain a rate of -0.4%. Those within the EU should be well aware the printers will again be spun up, with probable (and futile) further rate cuts. Such Twilight Zone measures won't solve any of the underlying structural problems, but hey, few want to talk about that.

We have an interesting summer ahead. Time to stock up on popcorn, sun-screen, and maybe some wine.... or whatever you might prefer.
--