With equities building significant gains across the day, the VIX was naturally in cooling mode, settling -4.9% @ 14.33 (intra low 14.08). Near term outlook is uncertain, with the threat of the low sp'2070s, before further upside across Wed/Thursday. 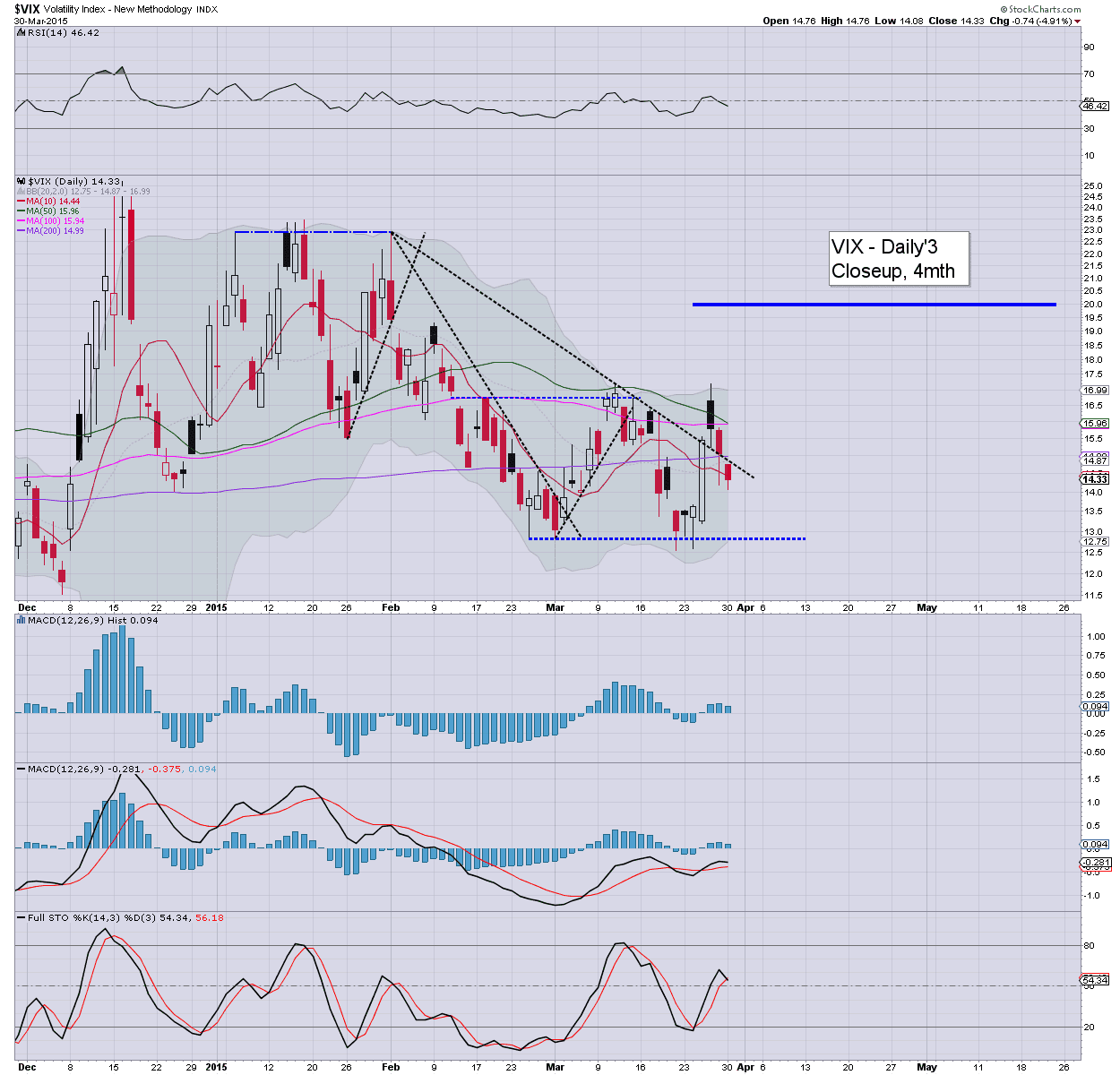 VIX remains in cooling mode since equities put in a short term floor of sp'2045. The issue now is whether VIX will break the recent low in the 12s.. before next up wave.

With end month/quarter tomorrow... market looks set for heavier trading vol.... and that would generally favour the equity bears... with a higher VIX.

US equities closed with significant gains, sp +25pts @ 2086. The two leaders - Trans/R2K, settled higher by 1.0% and 1.4% respectively. Near term outlook is uncertain.. with the threat of a bullish F flag failing.. at least to the low 2070. Daily/weekly cycles are turning back to bullish.. with one trading day left of the month/quarter. 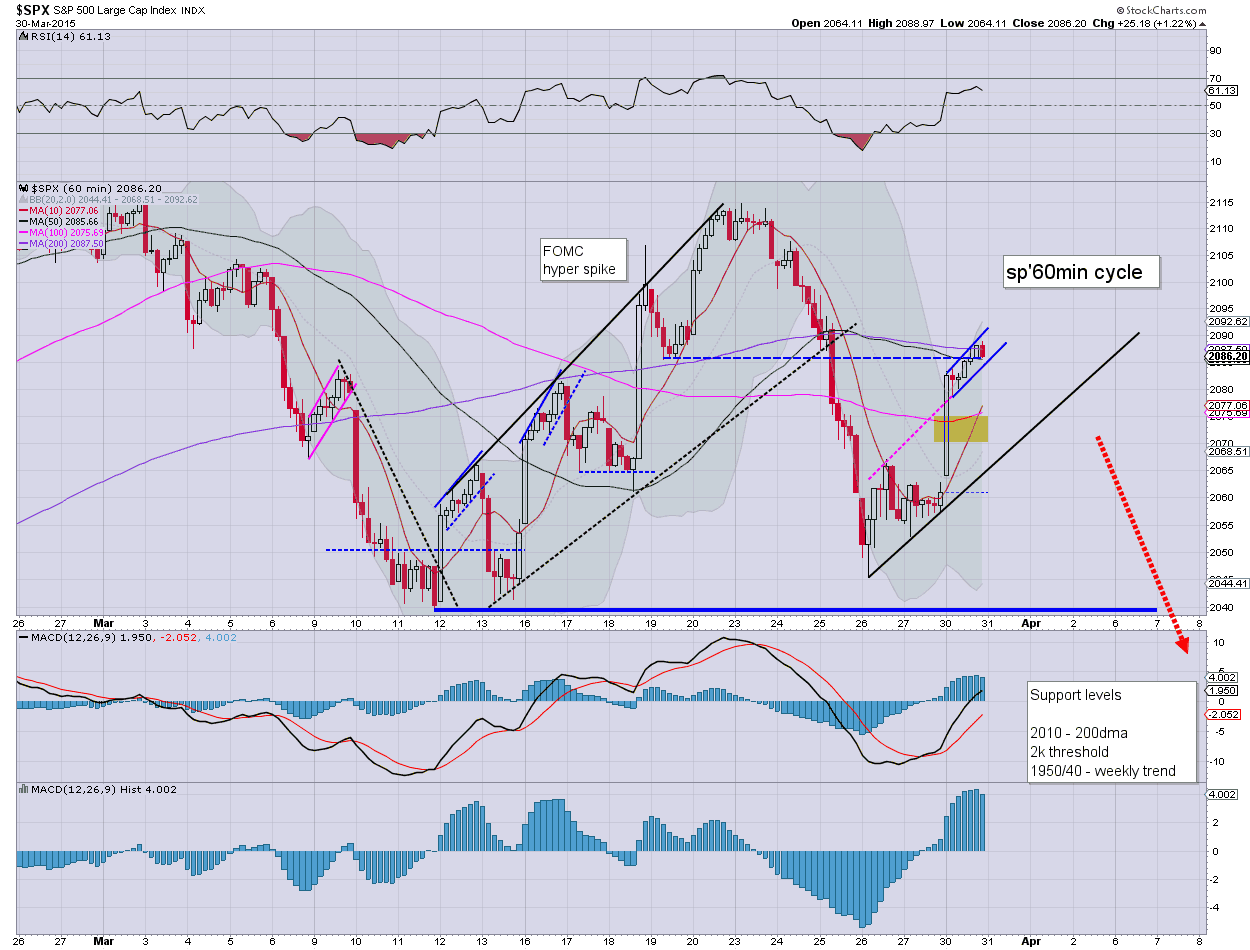 An interesting.. if somewhat annoying start to the week.

Gains were expected today.. but the magnitude of the gains is such that I lost confidence in launching an index short.

*the price action/news in TCK was particularly eye catching, but more on that one.... on another page!
-

4.21pm.. TCK denying any talks with Antofagasta.... stock drops sharply.. from 15.50.. to the 14.40s.
Posted by Trading Sunset at 21:01:00
Email ThisBlogThis!Share to TwitterShare to FacebookShare to Pinterest

US equities remain holding significant gains, with price structure on the hourly cycle offering a rather clear bullish F flag. However, it is notable that the most recent F flags of March 12th and 16th didn't work out so well for those long. VIX remains weak, -6% in the low 14s. 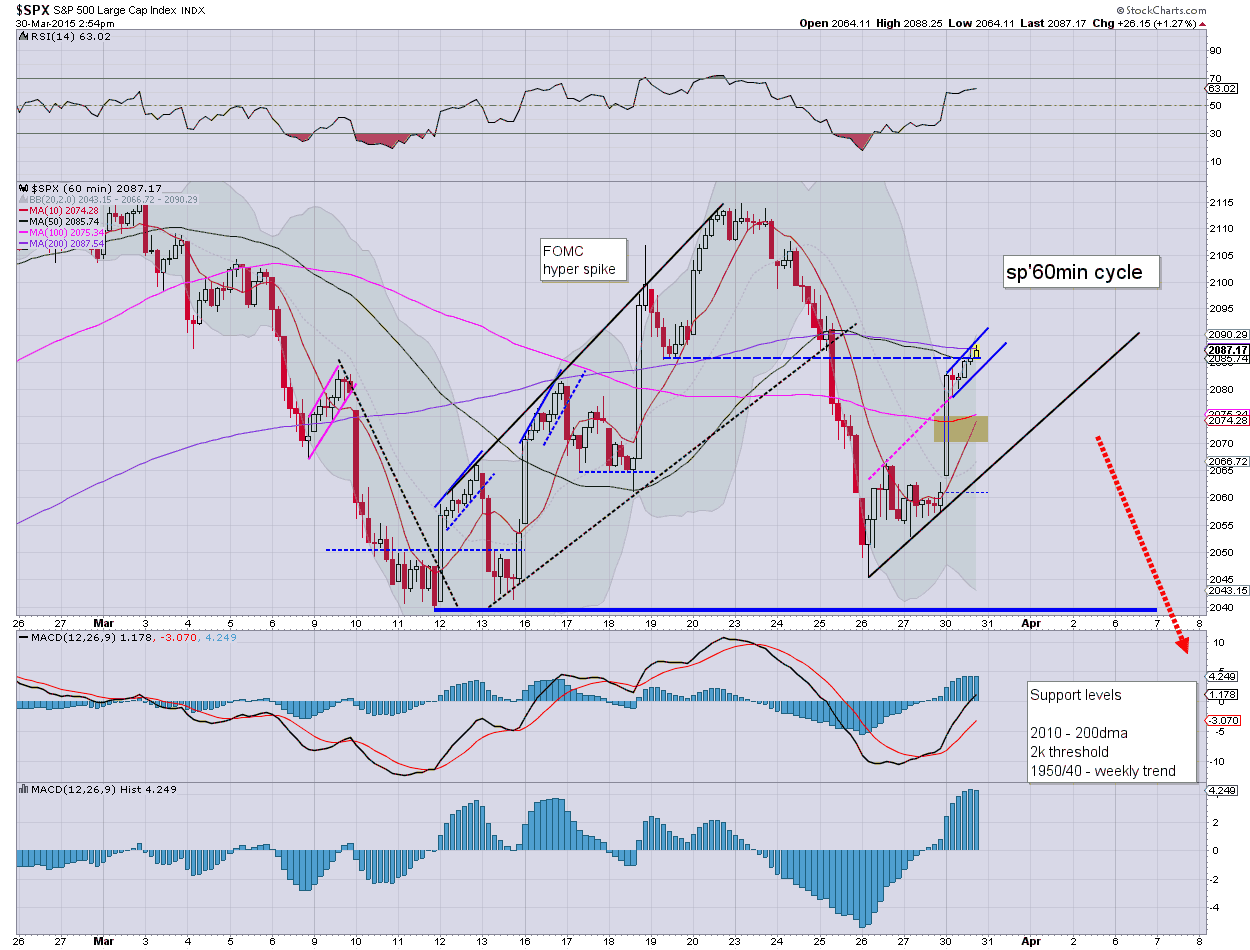 Suffice to say.. we have a clear jump higher at the open.. and look set to continue trending higher into the close.

The issue is whether this third F flag will also fail and snap lower at the Tuesday open....  difficult to say.
-- 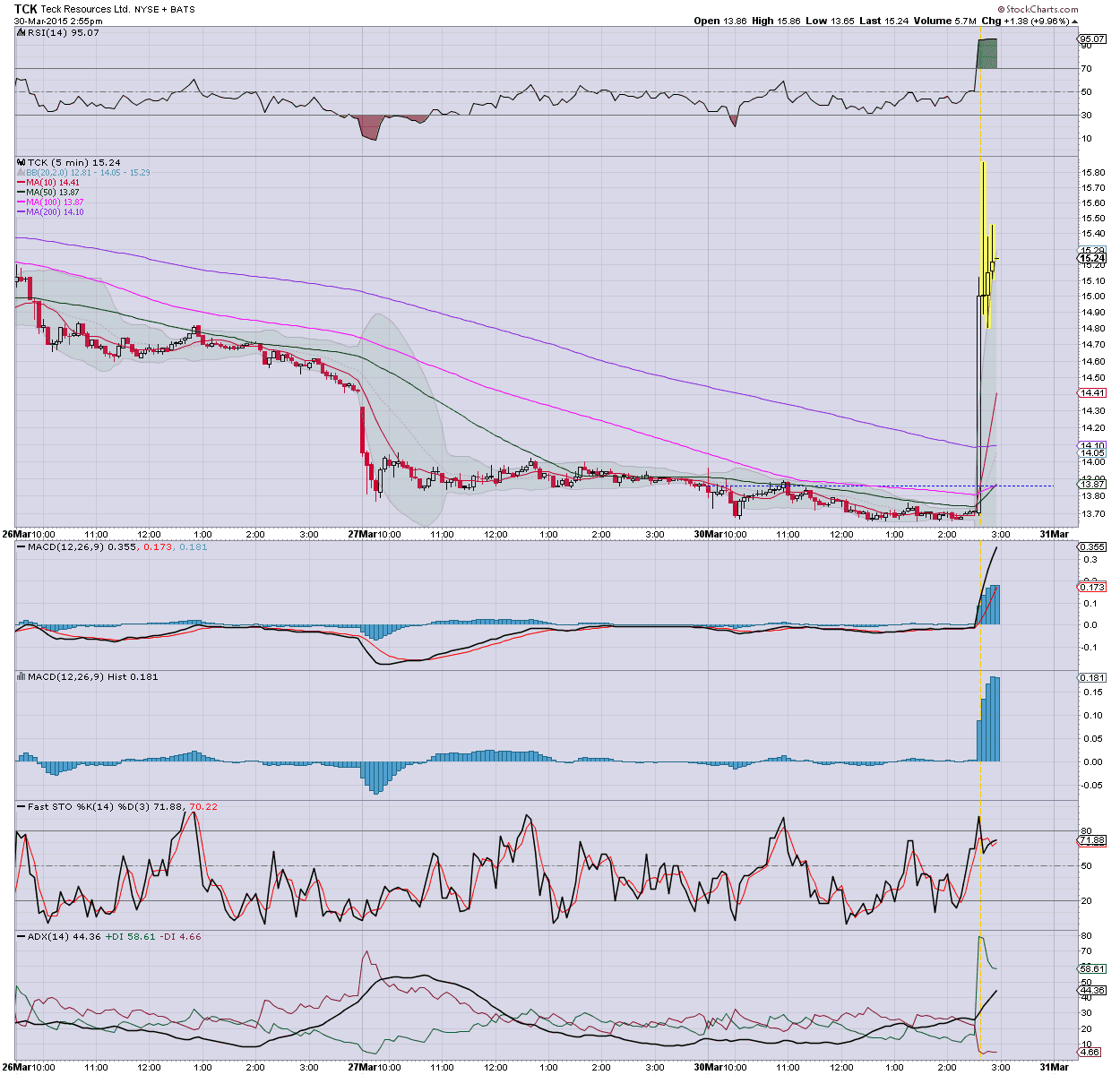 I've no idea what is going there...  maybe a rumour on a merger with fellow copper miner FCX ?


3.16pm.. Seems TCK is being linked to Antofagasta (ANFGY)
Posted by Trading Sunset at 19:57:00
Email ThisBlogThis!Share to TwitterShare to FacebookShare to Pinterest

US equities have hit the upper resistance zone of sp'2087.. and that might be it for this rally from the Wed' low of 2045. Whilst equities broke a higher high.. the VIX did not break a lower low. Meanwhile, metals remain weak, Gold -$13. Oil is increasingly weak, -1.3%. 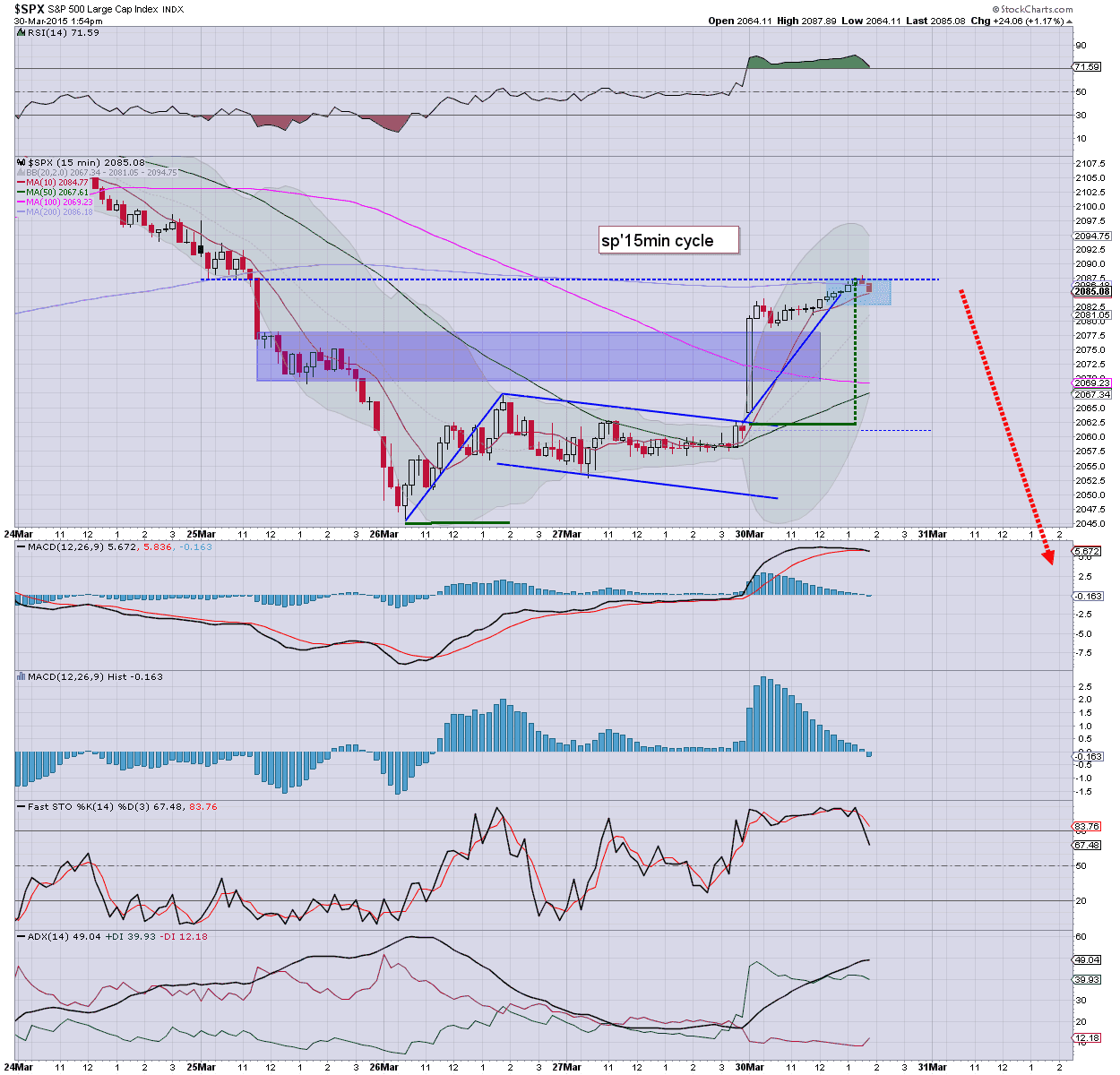 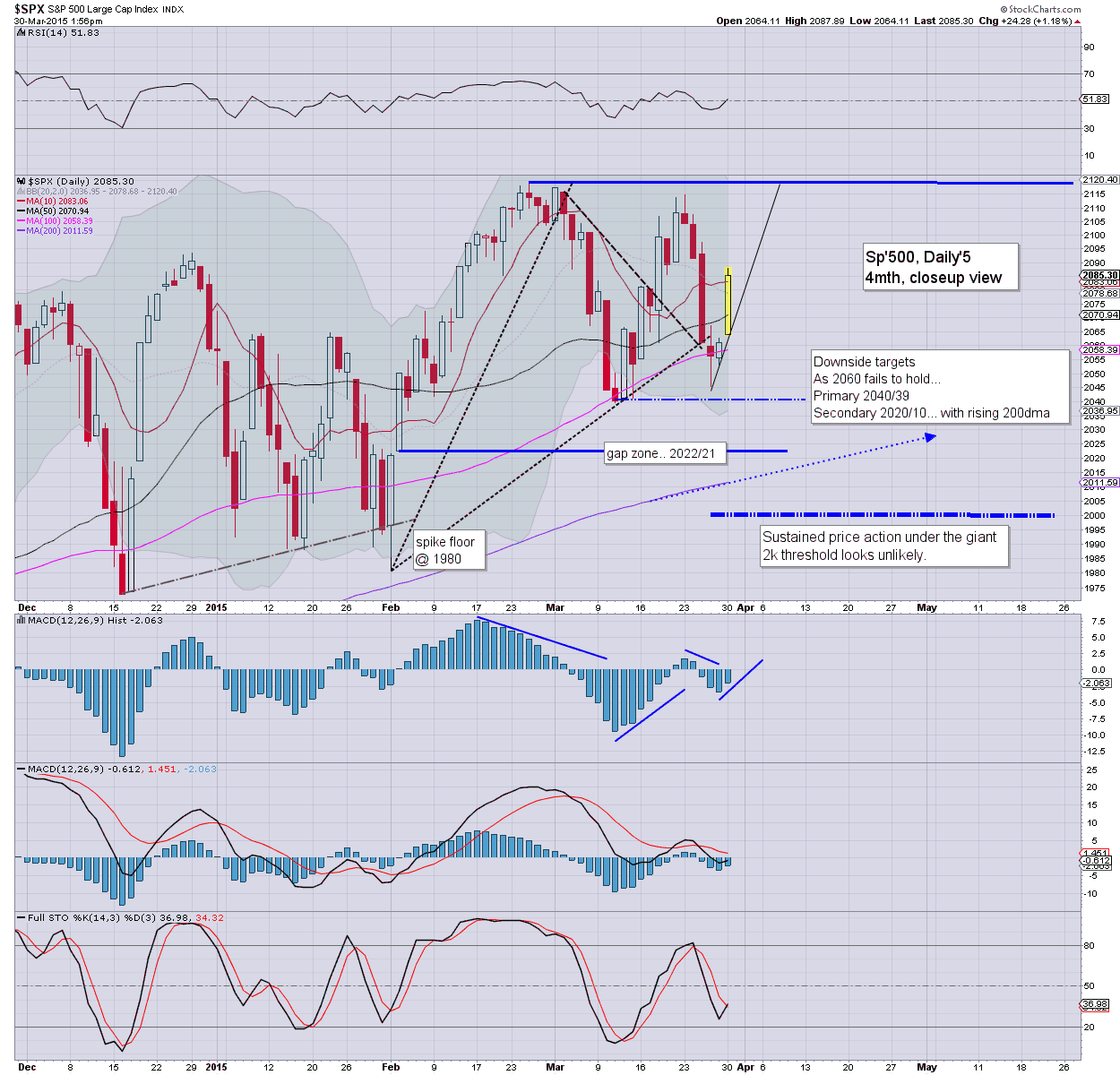 *to be clear... I had high inclination to launch an index short today... but frankly... I'm no longer in the mood.. and considering today's gains.... I'm staying out.
-

So.. with two hours to go... can the equity bears at least break back into the 2070s by the close?

In any case.. I'd still like to see a monthly close at least under 2070. More so.. .a net quarterly/year to date decline will need Tuesday to settle <2058.
-
Notable weakness.. miners, GDX -2.1%... naturall following the weakness in precious metals.
-

2.31pm.. Price structure on the hourly is a clear bullish F flag... but the last two didn't work out so well.
Posted by Trading Sunset at 18:56:00
Email ThisBlogThis!Share to TwitterShare to FacebookShare to Pinterest

1pm update - borderline for the bears

Equities continue to claw higher, with the sp' making a play to break above the resistance zone of 2085/87. Any daily close >2087 will negate any near term hope of downside. Monthly cycles remain a touch bearish... bulls need >2104.50 for a net monthly gain, and >2058 for a net quarterly gain 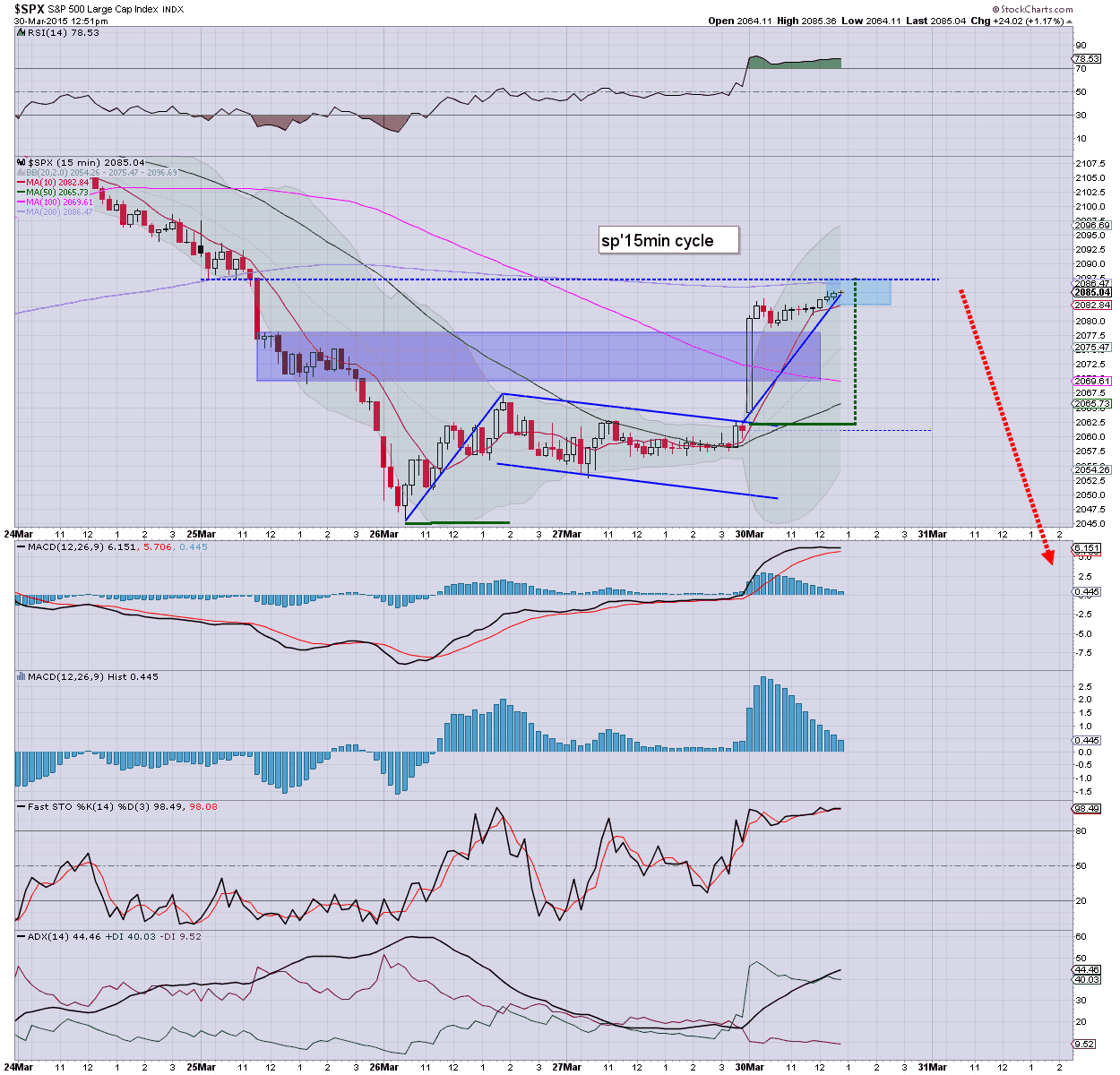 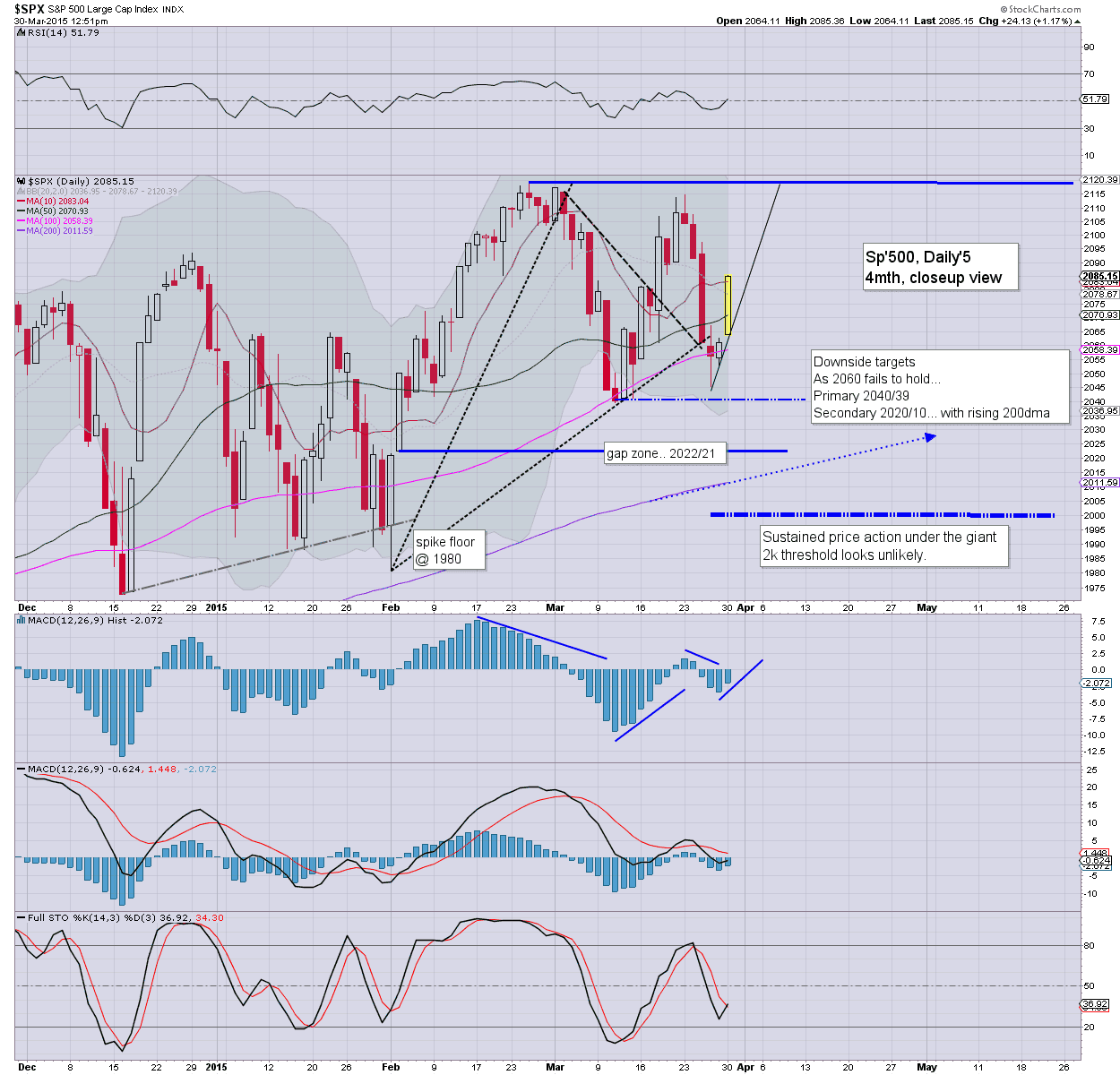 Its getting somewhat tiresome.. as the market is going to close higher for the second consecutive day... the first time since Feb'17th - as clown TV are highlighting every 5 seconds.

All things considered, it ain't looking good for those seeking to launch a re-short.. even though we're at levels which last Friday would have seemed very attractive.
-

Its a messy situation... with market mood not particularly based on anything of real substance.
Posted by Trading Sunset at 17:56:00
Email ThisBlogThis!Share to TwitterShare to FacebookShare to Pinterest 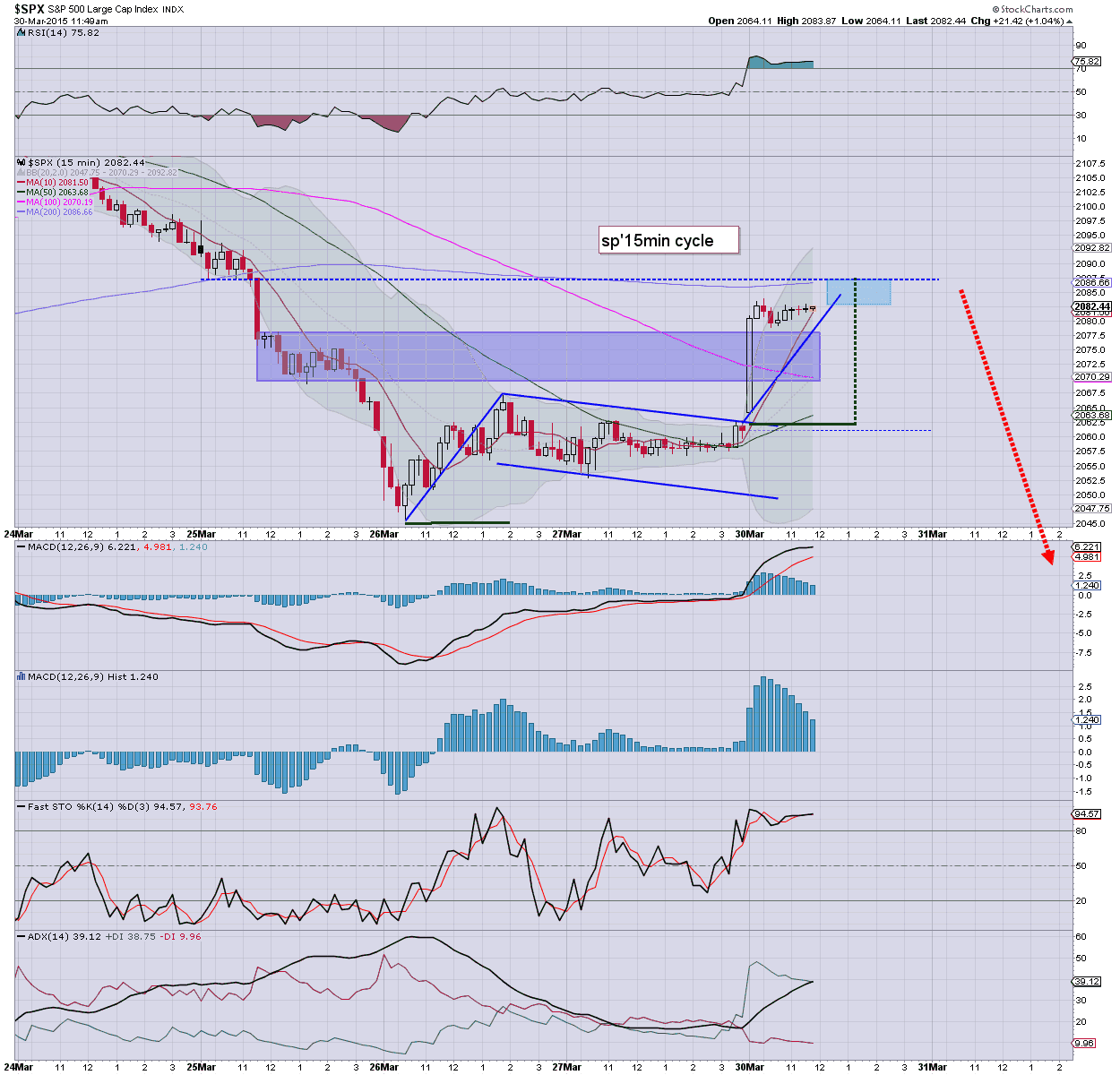 Certainly, the bull maniacs are starting the week on a strong note, but it is difficult to believe we'll be holding these gains across the week.


-
time for lunch
Posted by Trading Sunset at 16:50:00
Email ThisBlogThis!Share to TwitterShare to FacebookShare to Pinterest 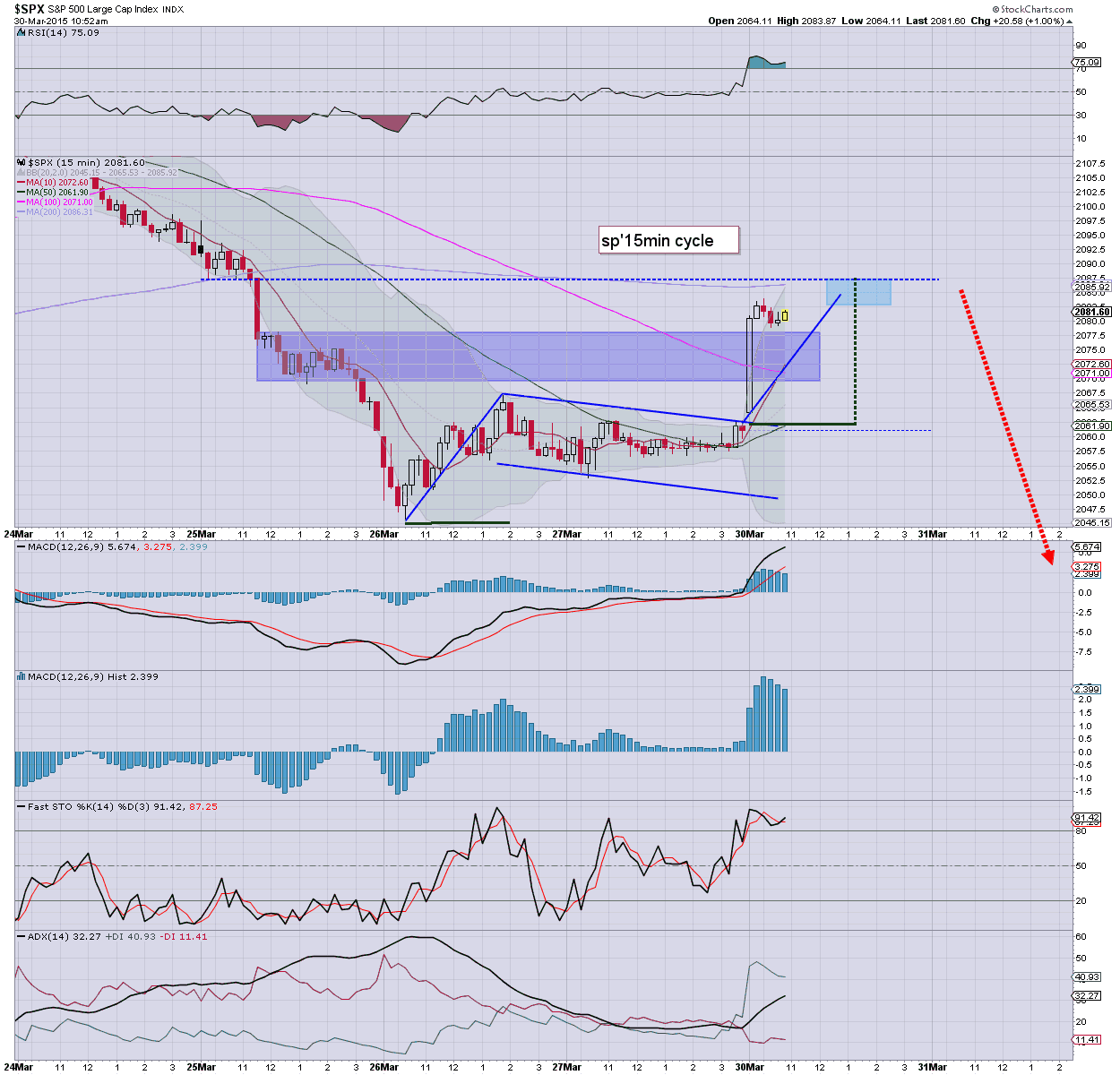 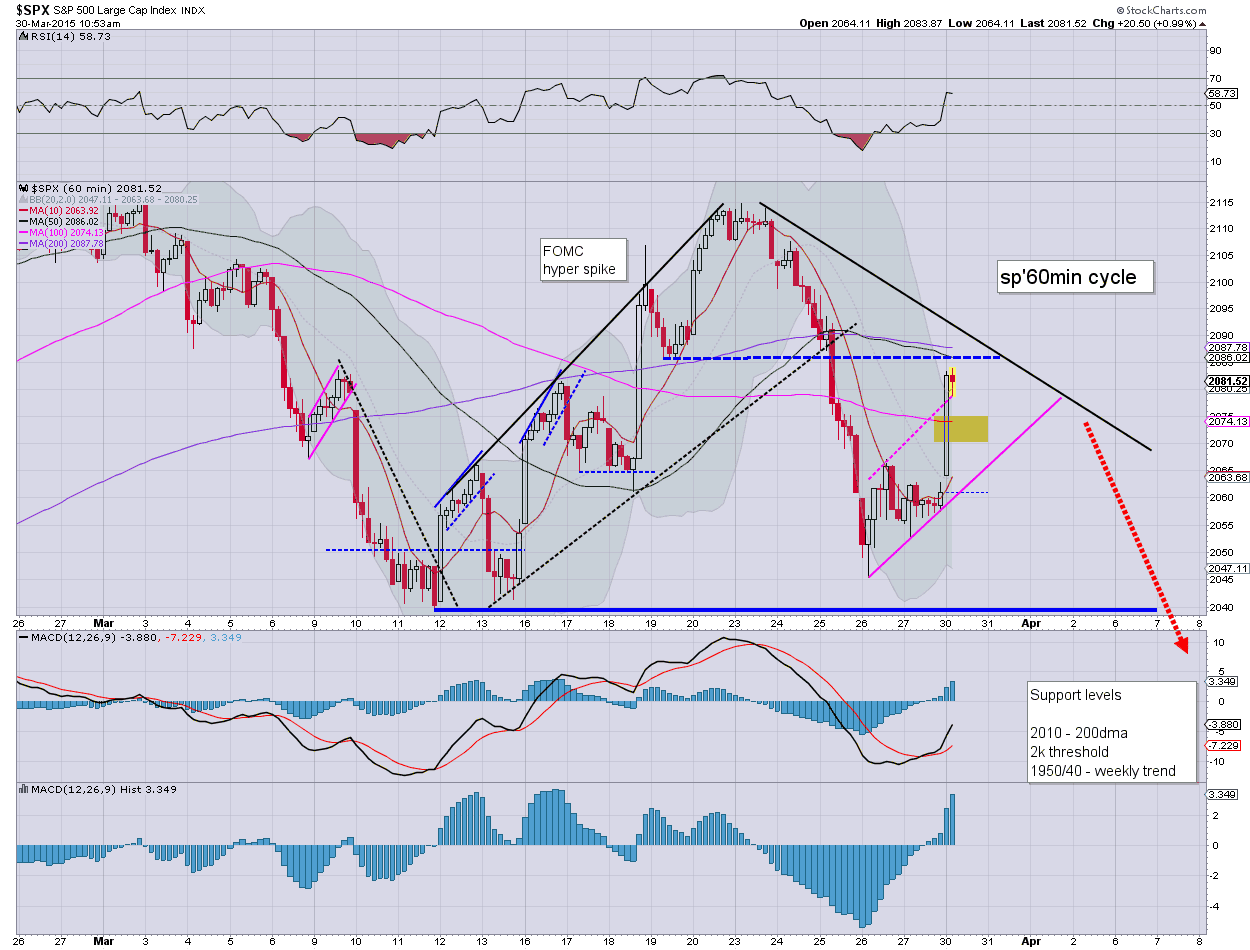 It looks like we'll hold gains into the early afternoon, with the first chance of renewed weakness.. more likely after 2pm.
-
notable gains, AAPL +1.8%. INTC is cooling after last Fridays ALTR bid-talk gains, -1.5%
Posted by Trading Sunset at 15:54:00
Email ThisBlogThis!Share to TwitterShare to FacebookShare to Pinterest

US equities open with borderline significant gains, already breaking into the low sp'2080s. VIX is naturally cooling, -6% in the low 14s. Metals are weak, Gold -$13, whilst Oil is holding minor gains of 0.5%. 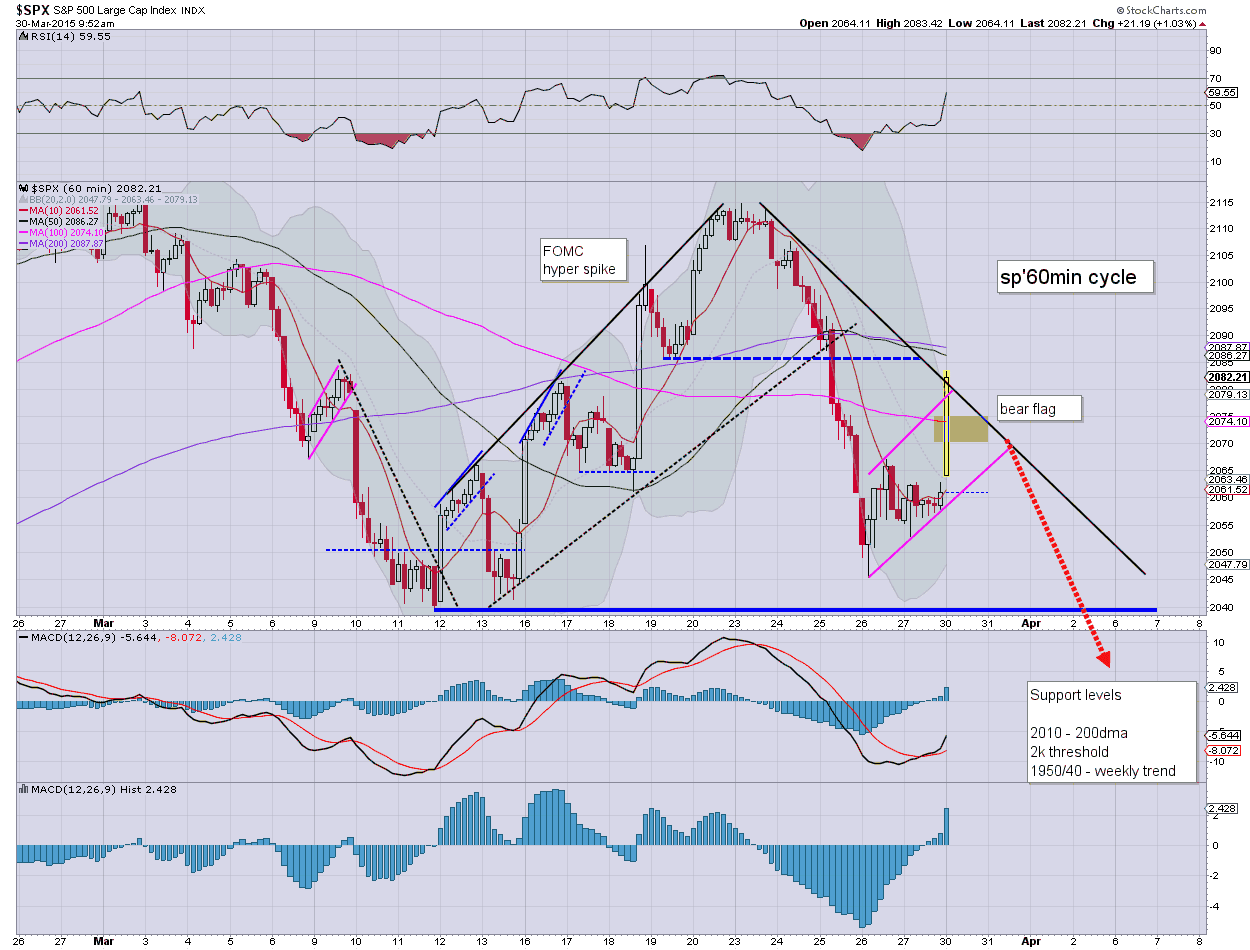 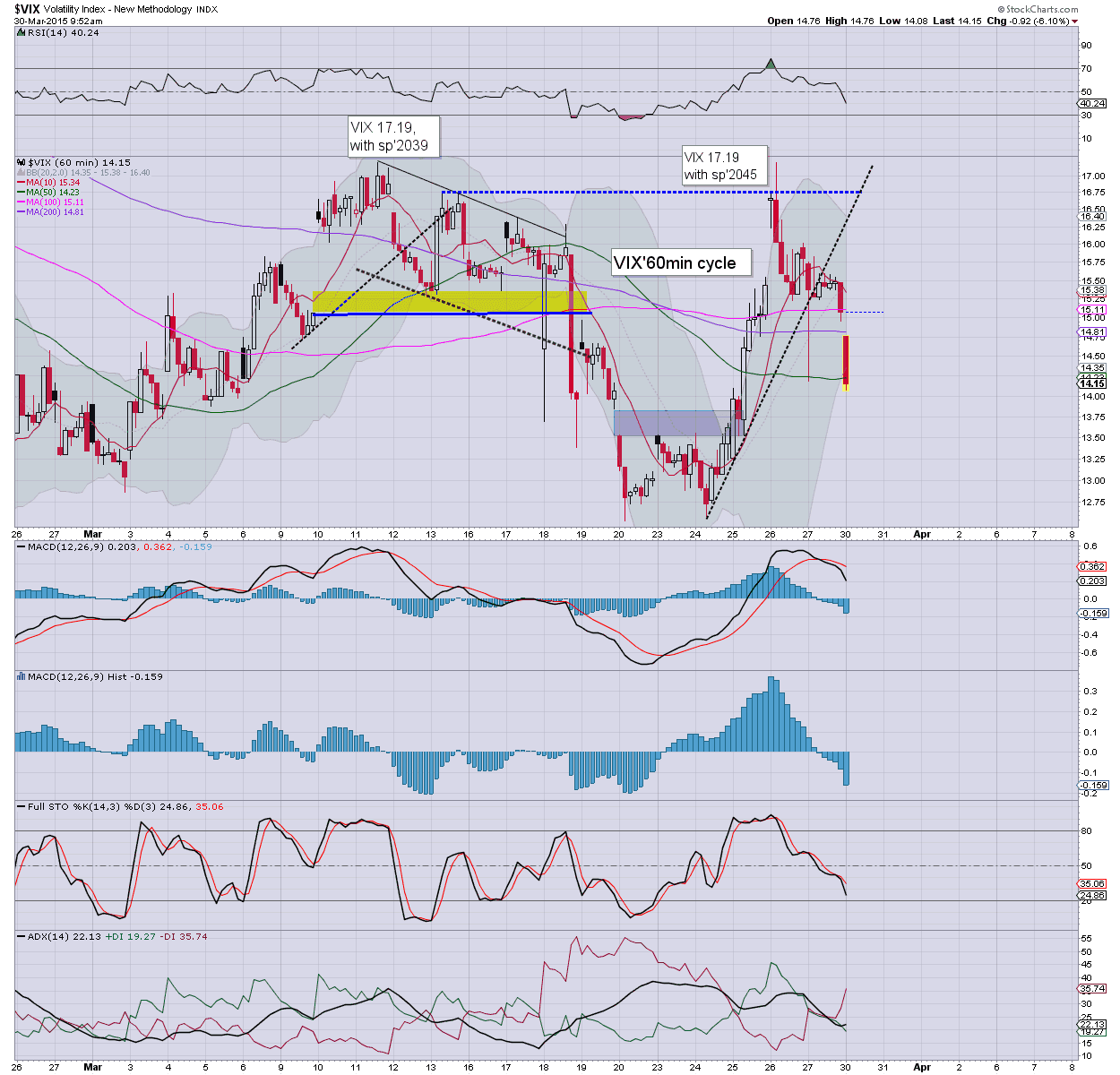 An interesting open... we're borderline on the edge of going too high for price structure to still be called a bear flag.

Bears need to hold the line after 11am... otherwise.. weekly cycles will start to turn back upward.
-

In any case... we'll likely cool lower later today... the issue is.. by how much.

Good morning. Futures are moderately higher, sp +11pts, we're set to open at 2072. There will be strong resistance in the 2070s, and renewed weakness is very probable.. as suggested by the bigger weekly cycles. Metals are sharply lower, Gold -$13. Oil is +0.4%. 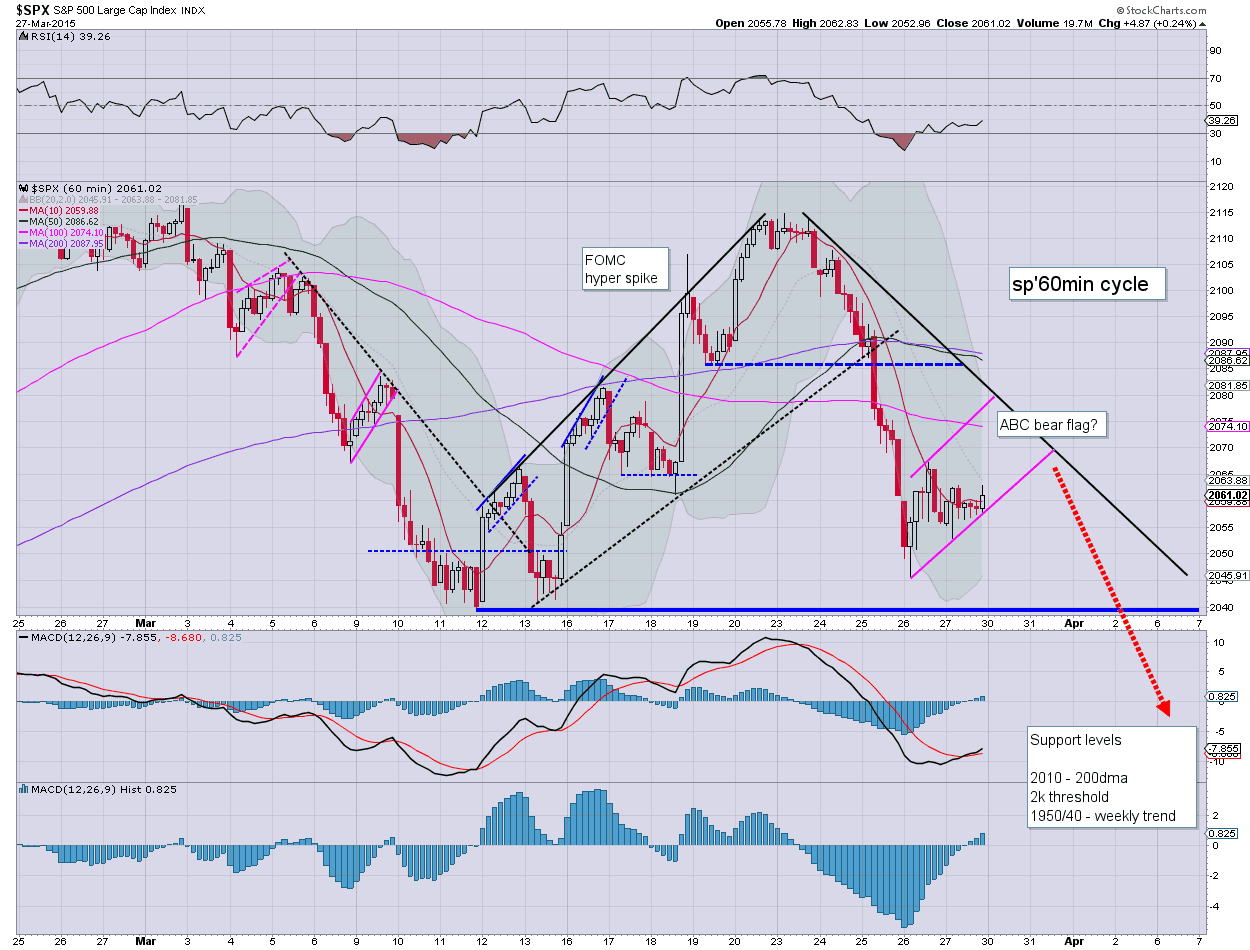 All things considered, it will be a valid area for anyone currently long to make an exit... and also a very natural re-short zone.

Price structure is arguably a multi-day bear flag... that stretches back to the Wed' morning low of sp'2045. If it is... then there is straight forward downside to at least 2039 in the next wave.. if not the 2010s, where the 200dma is lurking.

First things first though... lets see if we can get stuck by 11am this morning.

-
Doom chatter from Hunter, with PCR.

I'm no fan of PCR, but there are a few bits in there worth catching, not least his feisty rebuttal against Hunter on Iran, highlighting how the western powers have been meddling for decades. It remains pitiful how ignorant most people are in not knowing that the USA/UK overthrew a liberal - and democratically elected Iranian Govt' in the 1950s. Why did they do that ? Ohh yeah, to get hold of the Oil at a better price than the Iranian leadership had offered to sell.

--
Have a good Monday
Posted by Trading Sunset at 13:40:00
Email ThisBlogThis!Share to TwitterShare to FacebookShare to Pinterest
Newer Posts Older Posts Home
Subscribe to: Posts (Atom)