Volatility holds the 20s into the weekend

Despite equities seeing significant gains into the opex close, the VIX still managed to hold above the key 20 threshold, settling -5.9% @ 21.07. Regardless of any equity chop/weakness next Tue/Wed, with the ECB set to launch major QE, the VIX looks set to fall into end month. 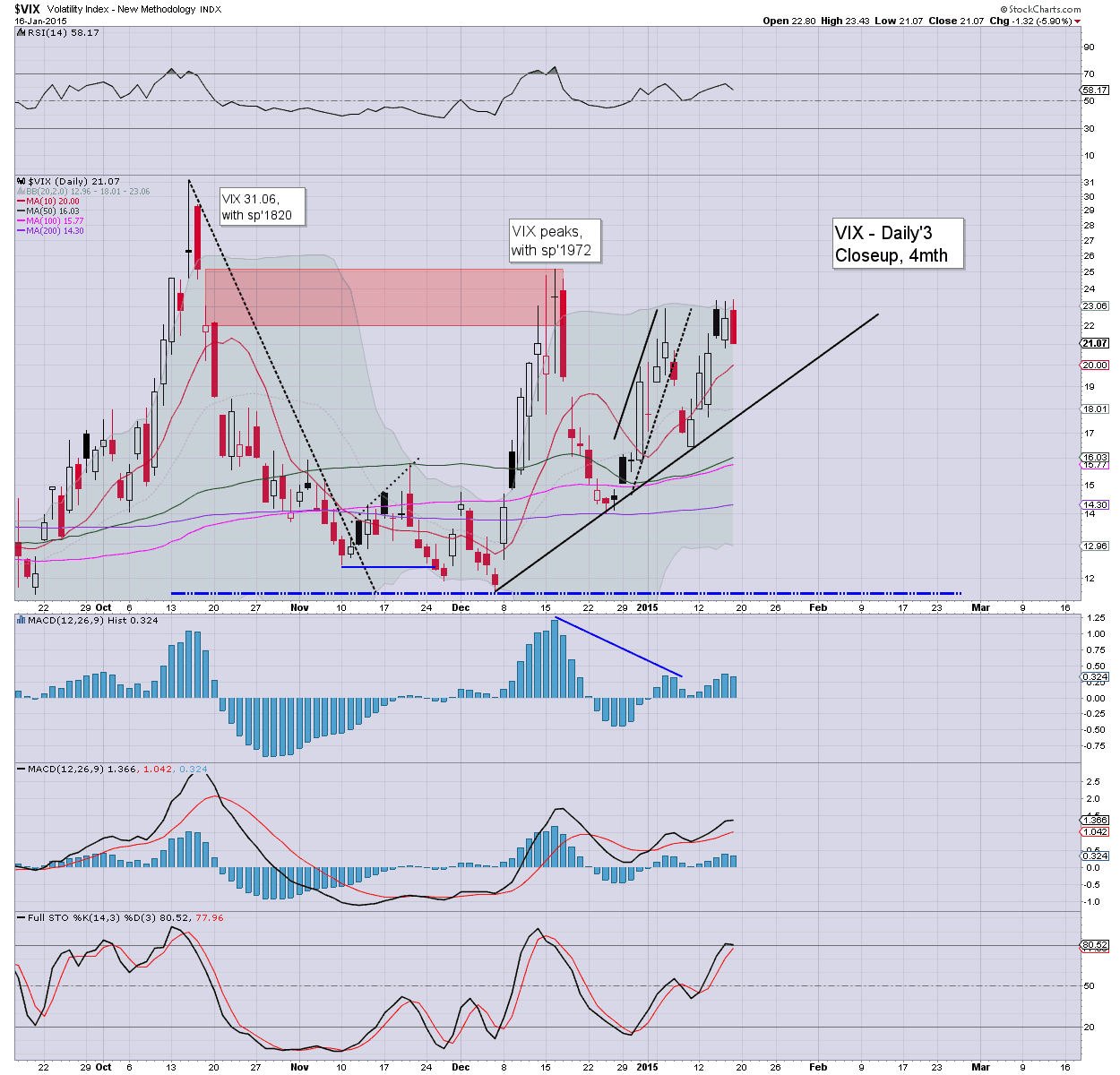 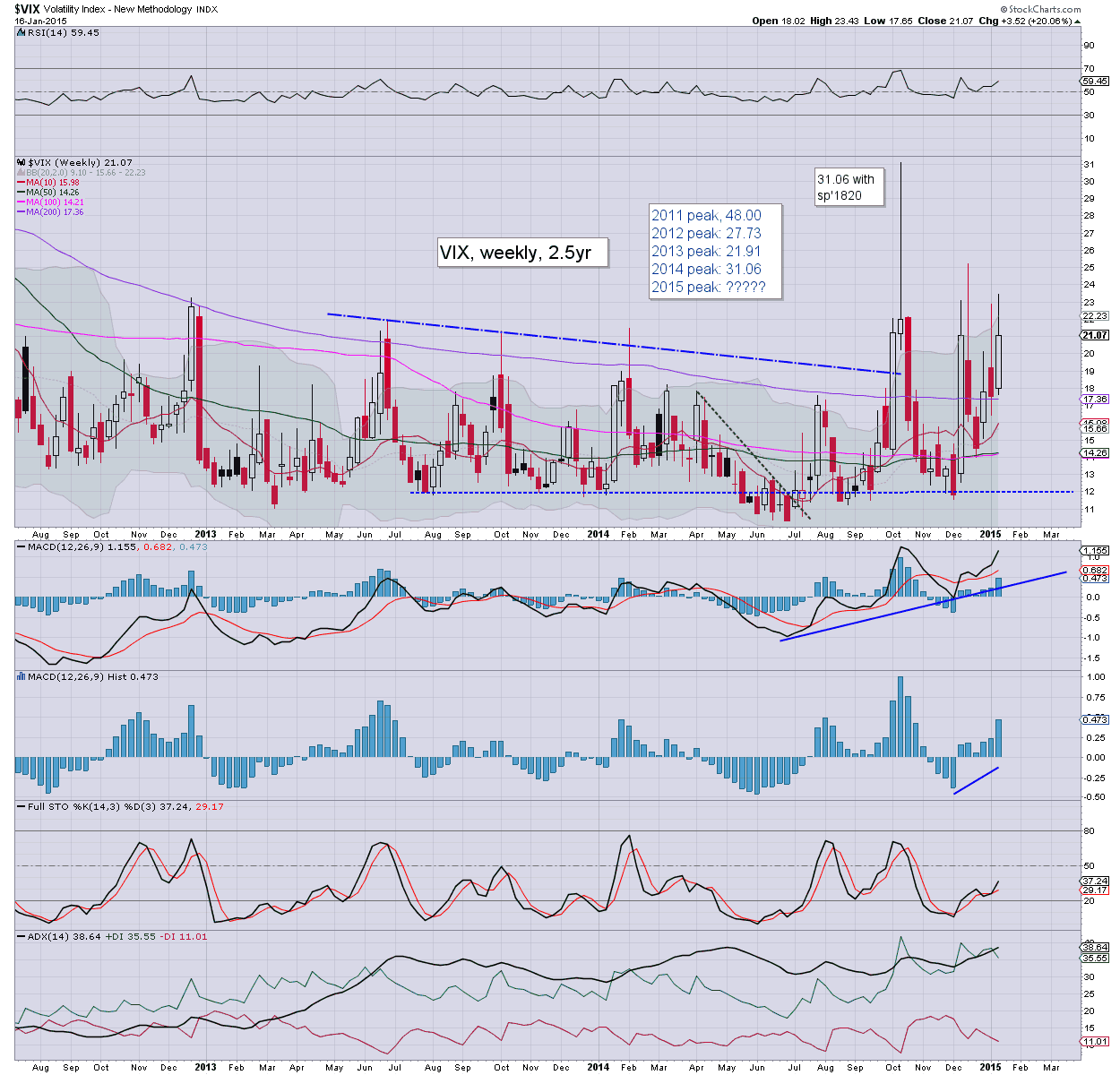 *across the week, the VIX gained a very significant 20.1%. The weekly candle though is a little spiky, and is likely indicative that a cycle high might be in.
-

Even if the market falls next Tue/Wed (for whatever reason)... VIX looks set to broadly fall into end month/early February.
--

US equities closed significantly higher, sp +26pts @ 2019. The two leaders - Trans/R2K, settled higher by 1.2% and 1.9% respectively. With the closing hour strength, the viability of a hit of the 200dma has greatly decreased. In any case... broader upside... once the ECB announce QE. 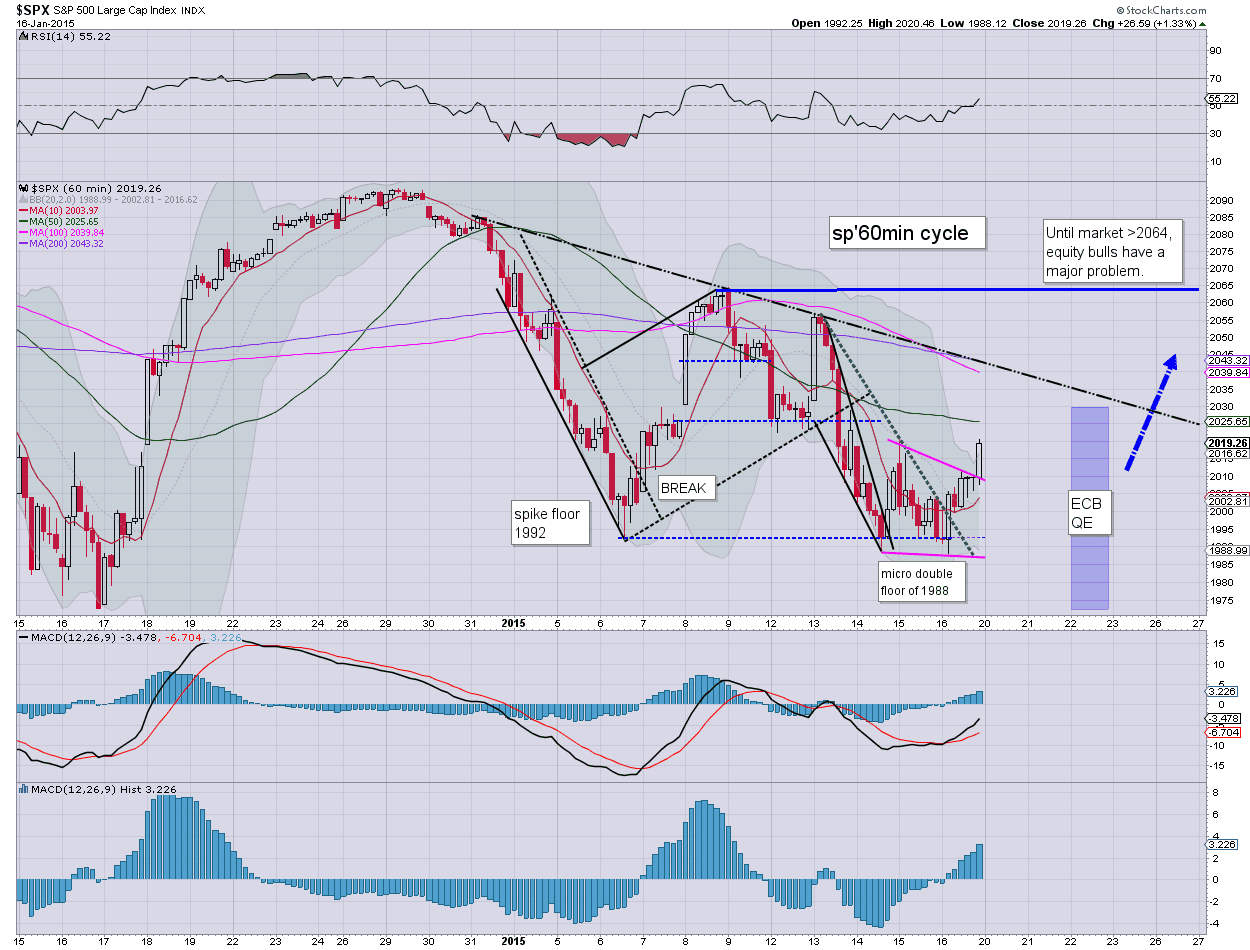 ... and another week in market land comes to a close.

Congrats to all those who didn't get blown up by the FX changes!
-

The closing hour was a major disappointment, and clearly, a fair few bears were either short-stopped out, or simply closed out for the long weekend.

--
*the usual bits and pieces across the evening.. to wrap up the week
Posted by Trading Sunset at 21:02:00
Email ThisBlogThis!Share to TwitterShare to FacebookShare to Pinterest

The smaller 60/15min cycles are offering a rollover into the close, not least ahead of a 3 day weekend. Regardless of the exact close, equity bears are set for the third consecutive net weekly decline. Further weakness seems due next Tue/Wed... before the ECB print machine is spun up. 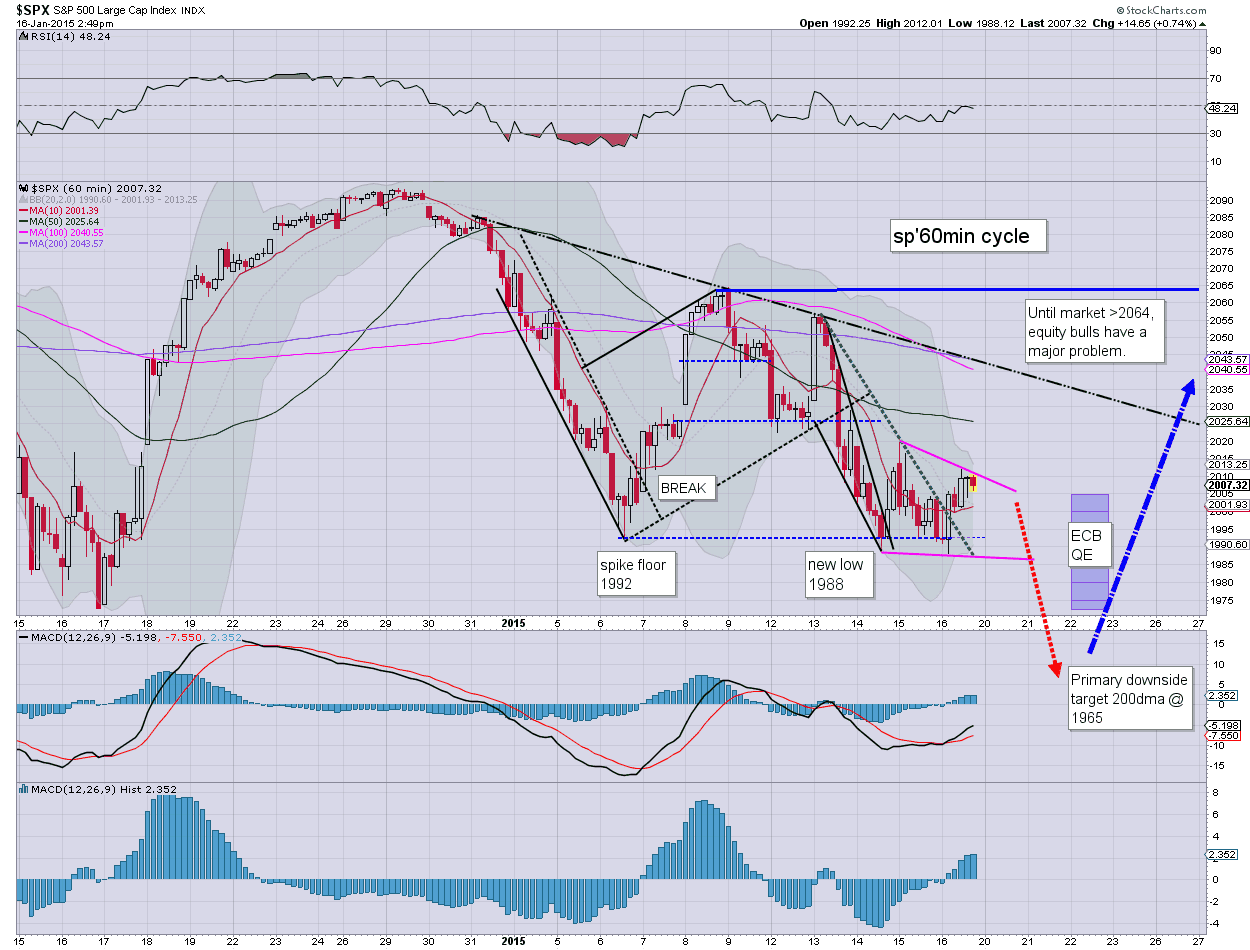 *I probably should refrain from adding colourful arrows on my charts.. but hey.. its my best guess.
--

The last hour of what has been a pretty exciting week, not least with the SNB causing all sorts of havoc.

A number of FX brokers are having serious issues... not least FXCM. Here in the UK, Alpari have imploded... see HERE. Looks like West Ham United are going to need a new primary sponsor, lol
--

Seriously though... I look at the Swiss move as a pre-cursor to all sorts of 'system' trouble across the next few years.

Notable strength: copper miners, FCX and TCK both higher by 4%
-

In any case.. still viable downside next Tue/Wed....


3.40pm.. short-stops getting hit hard now... sp'2015
Posted by Trading Sunset at 19:50:00
Email ThisBlogThis!Share to TwitterShare to FacebookShare to Pinterest

2pm update - awaiting another down wave

US equities are holding moderate gains, but there is little for the equity bulls to be pleased about. Further weakness looks due next Tue/Wed', before Draghi announces it is time to spool up the printers for more QE. Gold is holding gains, +$18, whilst Oil is building gains, +3.6% 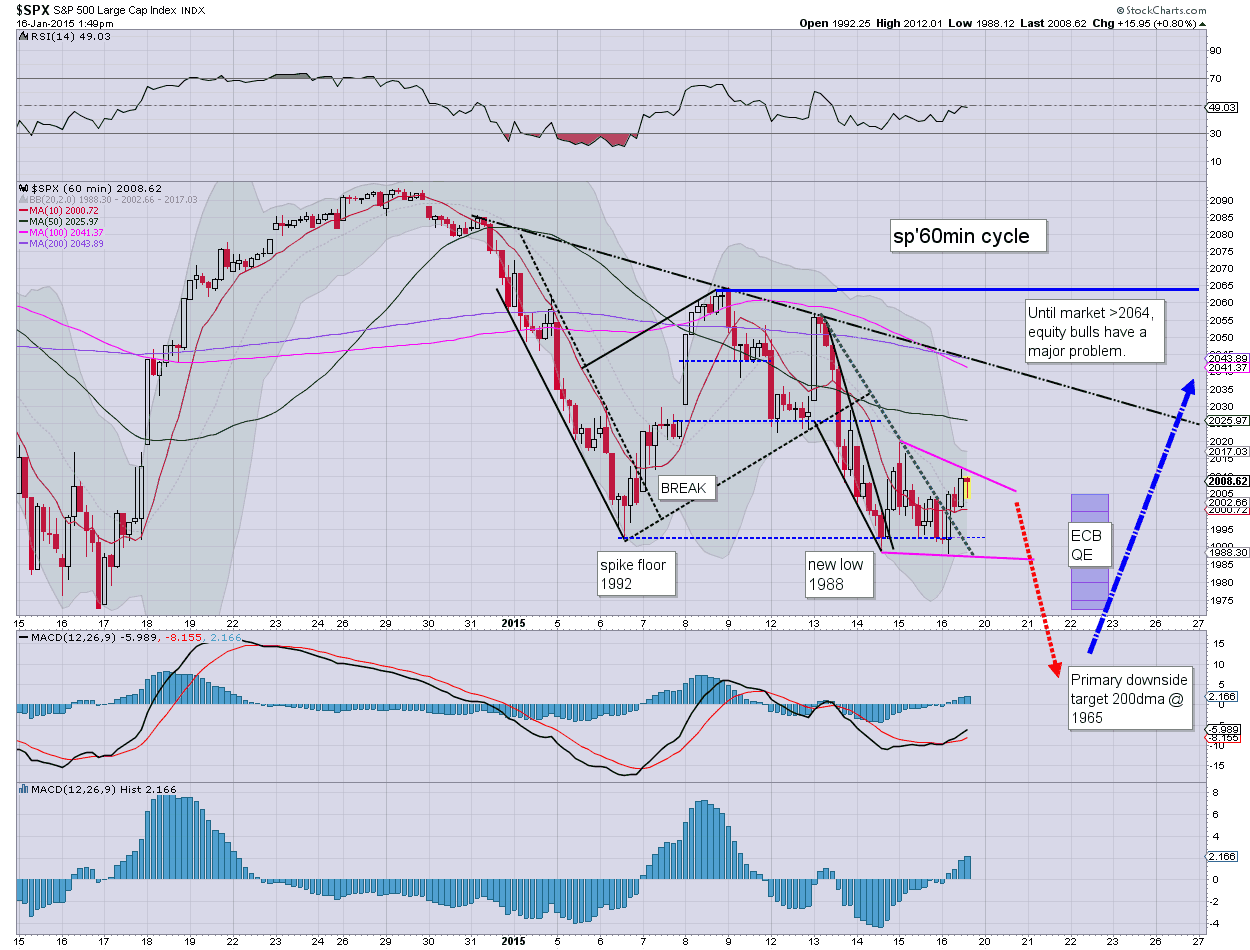 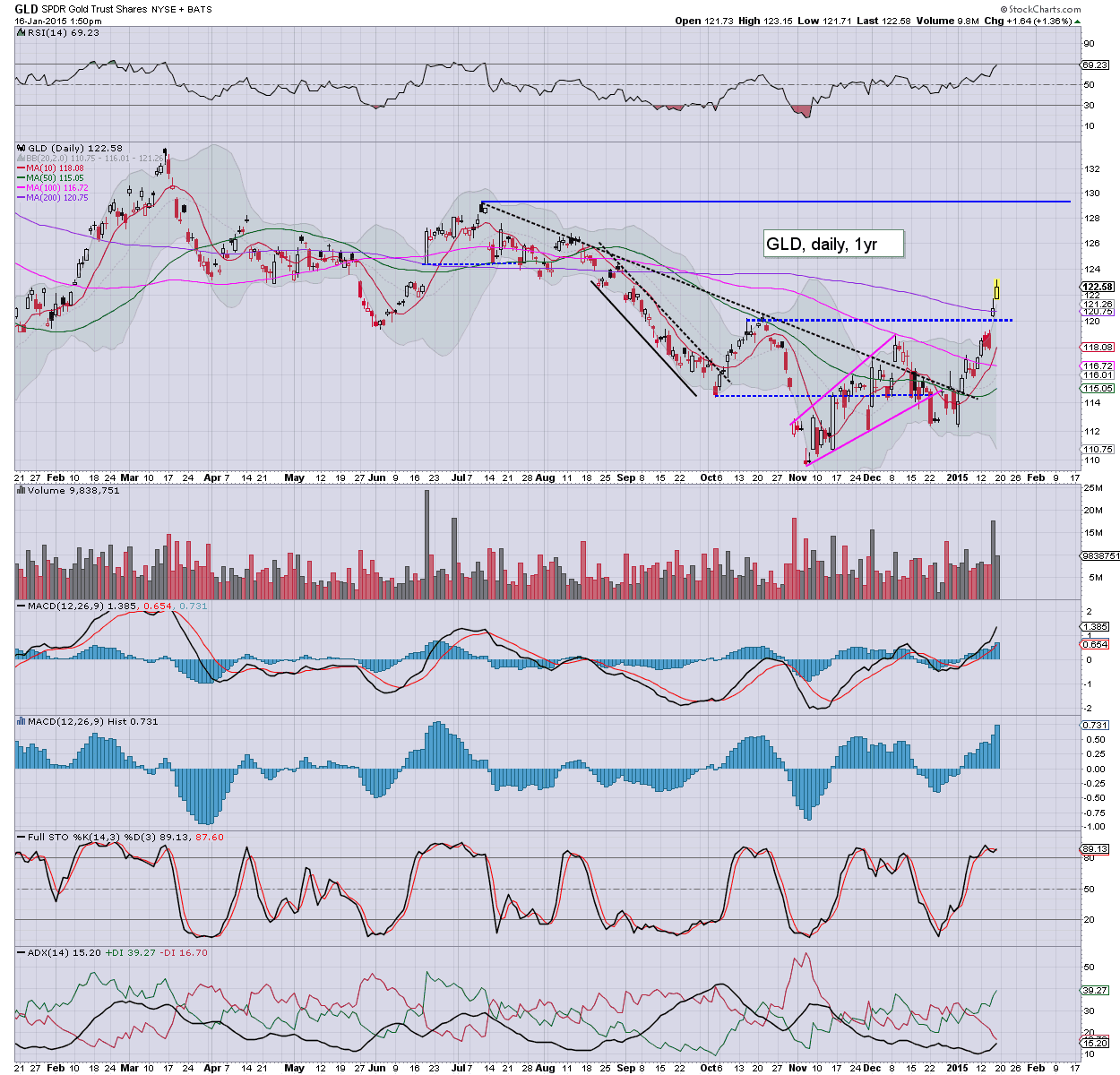 We could easily see continued chop into the long weekend....

regardless though... a hit of the 200dma of sp'1965 still looks highly probable.. before this nonsense starts a new multi-week up wave.

Right now... considering the QE.. a new high in Feb/March still looks due.
--
Posted by Trading Sunset at 18:51:00
Email ThisBlogThis!Share to TwitterShare to FacebookShare to Pinterest

US equities remain moderately higher, but all things considered.. it is a weak up wave... and renewed weakness looks due.. for a test of the 200dma @ sp'1965. VIX is reflecting a market that is still concerned, holding the 22s. Gold continues to build gains, +$19. 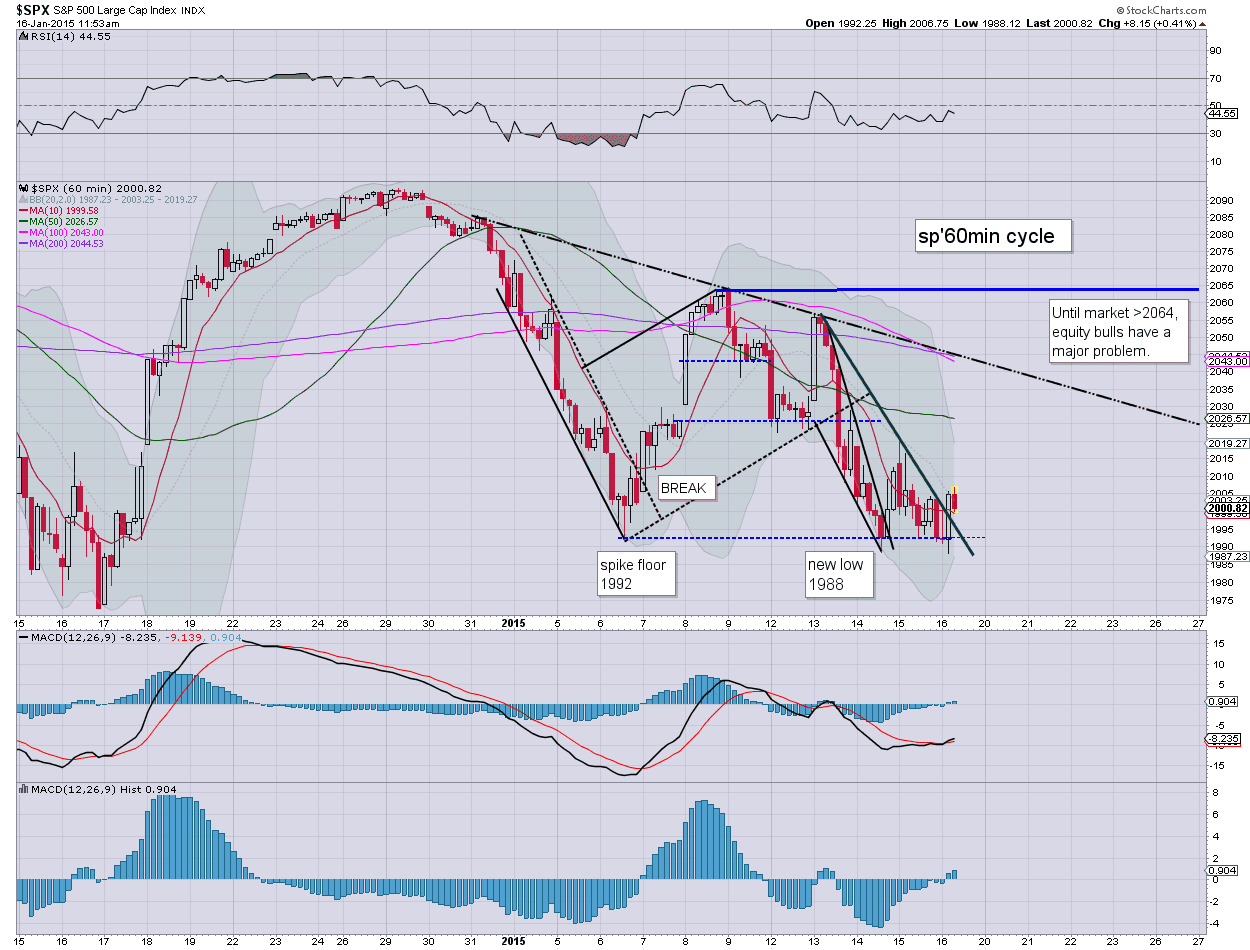 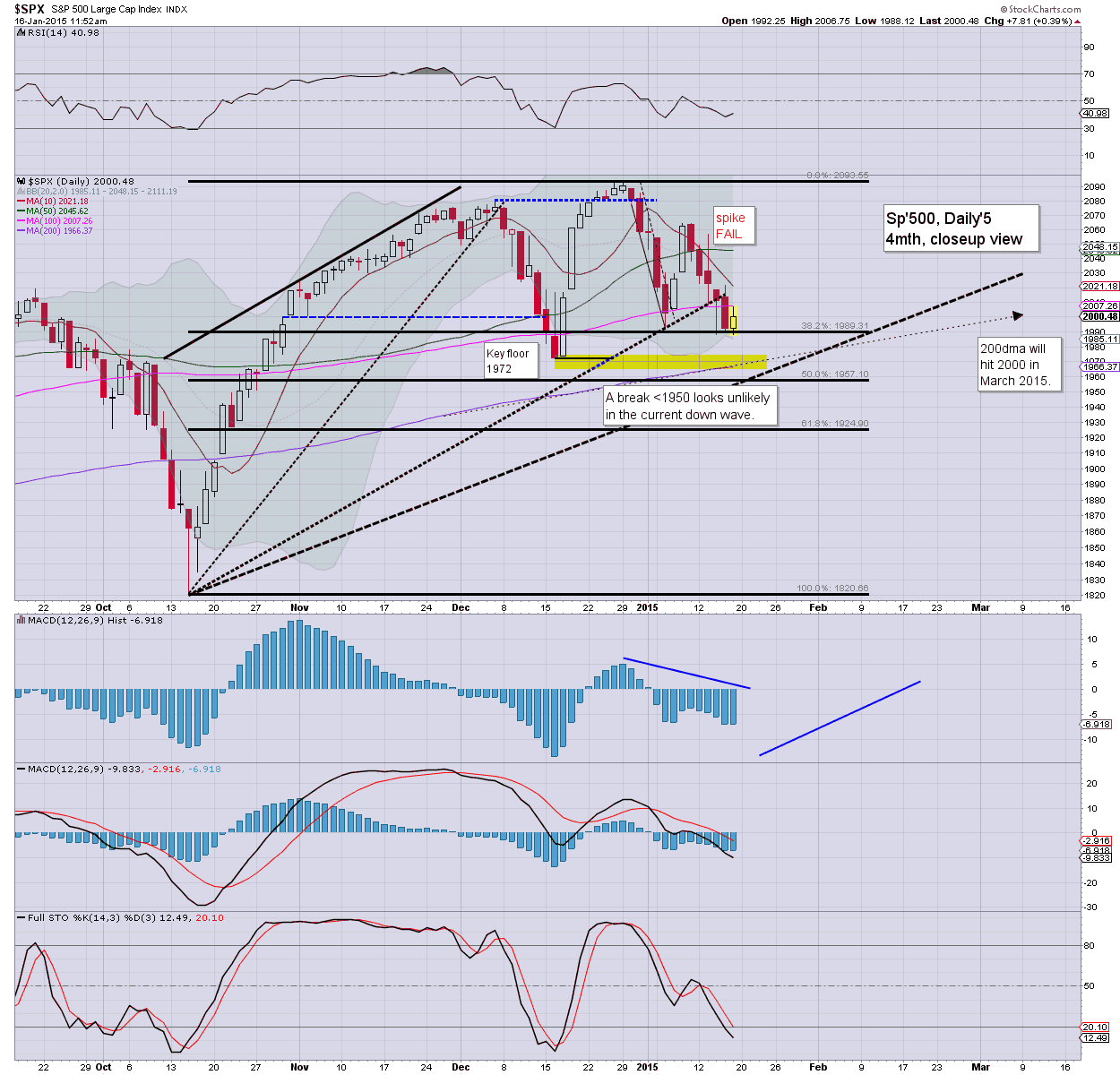 *Two issues to keep in mind, its opex... so expect more chop this afternoon... and we have a 3 day weekend... so.. might see increased selling into the weekend as some of the rats get twitchy.
--

Other than that... little to add.


--
time for lunch........ back at 2pm
Posted by Trading Sunset at 16:56:00
Email ThisBlogThis!Share to TwitterShare to FacebookShare to Pinterest

11am update - battling to break the down trend

US equities remain moderately higher, but given a few more hours...  the market looks set to see renewed weakness into the 3 day holiday weekend. Commodities are on the rise, Gold +$15, whilst Oil is +3.0%. Despite the equity gains, VIX is notably +2% 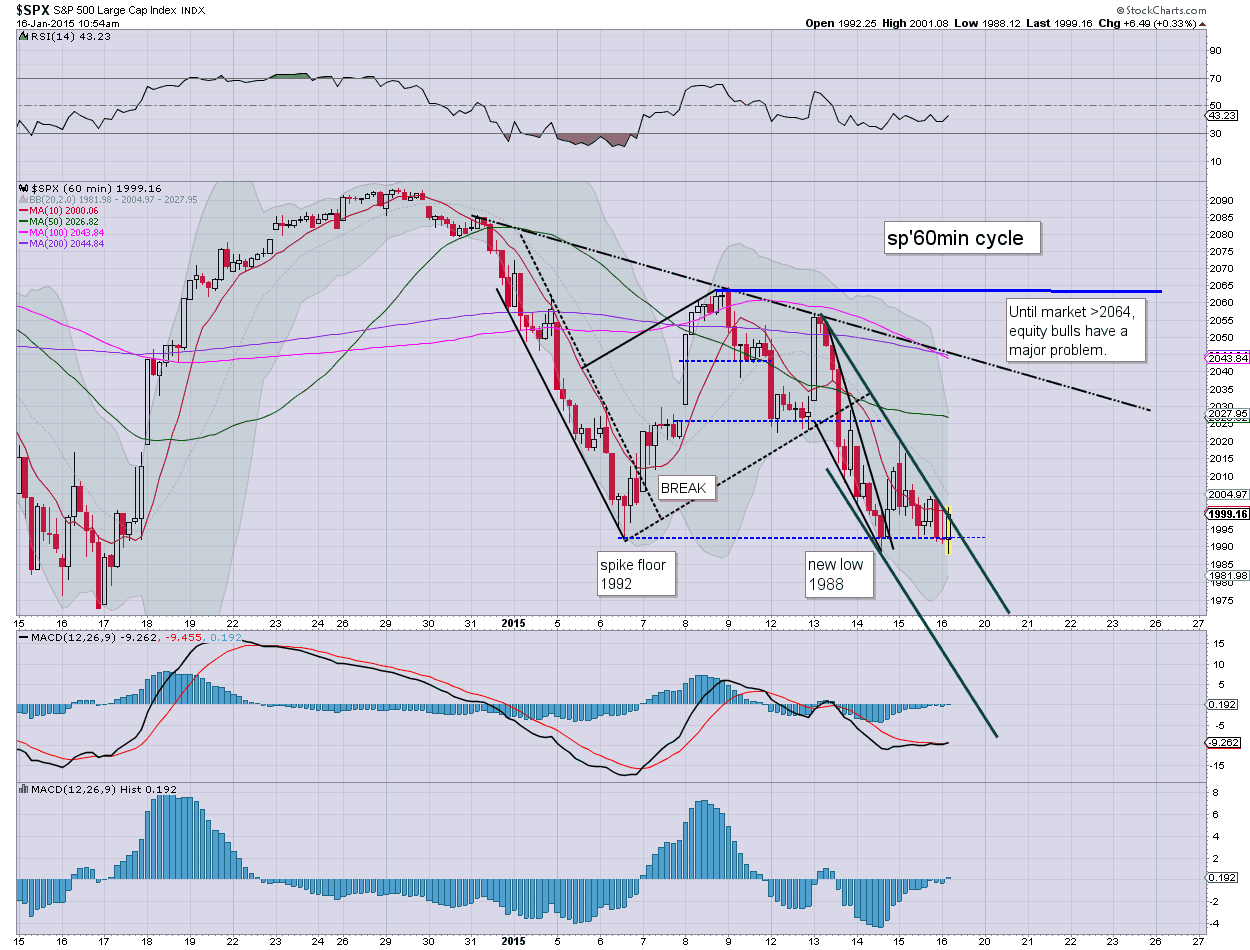 So.. its a bit choppy, but then its opex.

Best guess remains.. renewed downside to the 200dma of sp'1965... I think many would be quite surprised if we don't break to that.

Clearly, that looks unlikely today.. and instead the target time frame will be Tue/Wed... just ahead of the ECB spooling up the printers.

--
time to cook
Posted by Trading Sunset at 15:55:00
Email ThisBlogThis!Share to TwitterShare to FacebookShare to Pinterest

Equities open a little higher, but the market looks highly vulnerable to breaking lower at any point today. It is arguable that sp'1988 makes little sense as a short term low, a hit of the 200dma of 1965 still looks a valid target. Gold continues to build gains, +$10. Oil is bouncing +2% 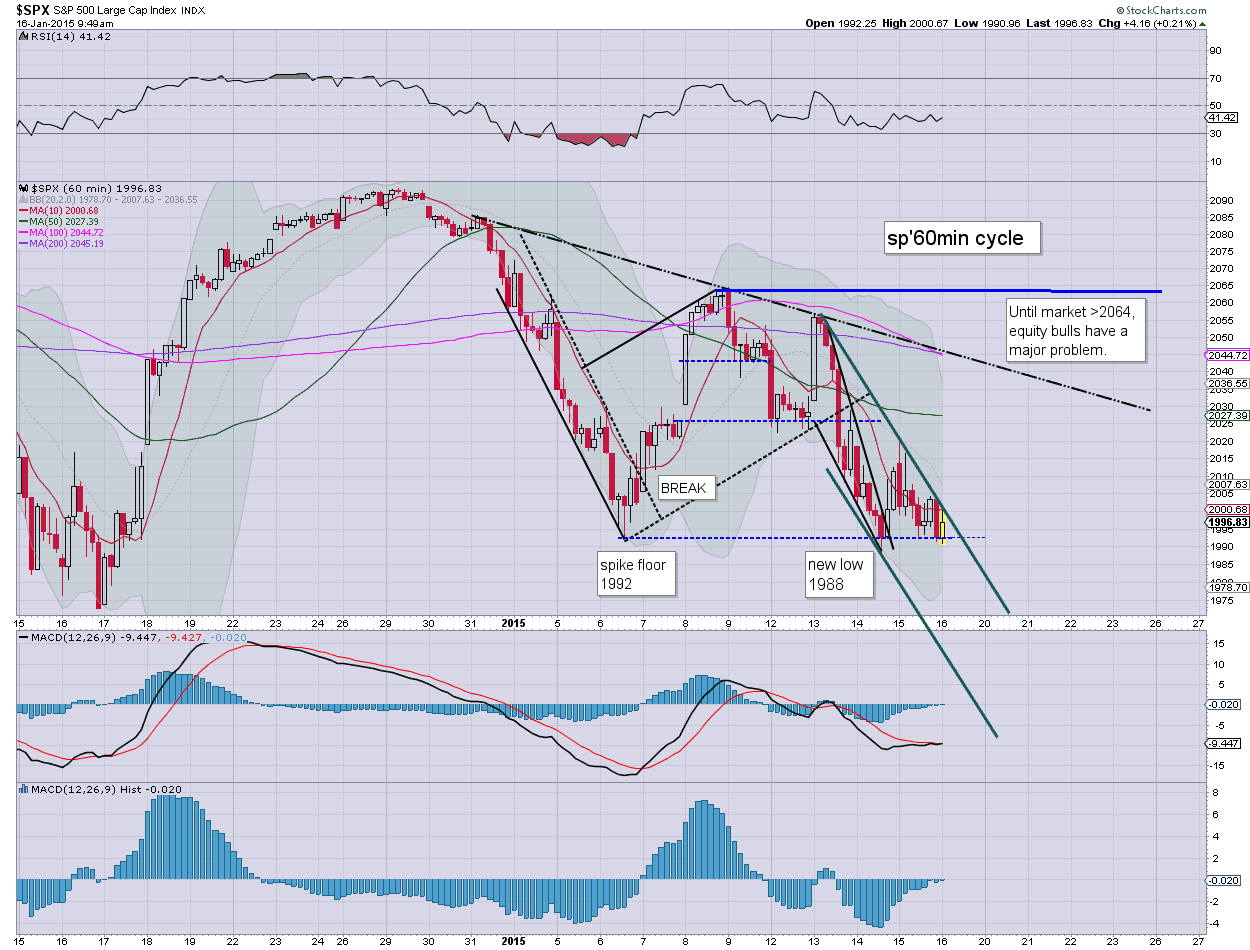 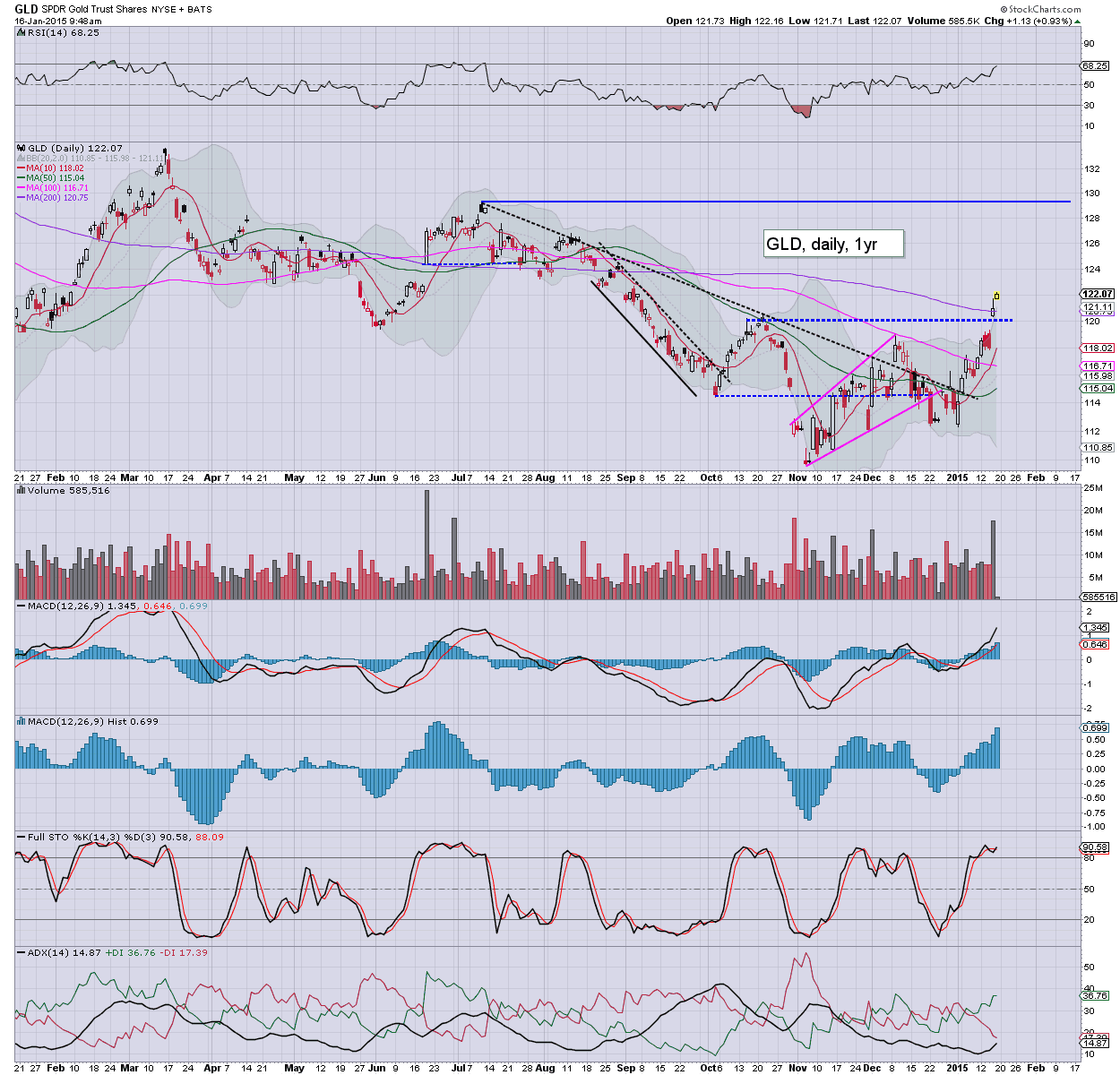 --
back soon...
Posted by Trading Sunset at 14:50:00
Email ThisBlogThis!Share to TwitterShare to FacebookShare to Pinterest 
-
Have a good Friday
Posted by Trading Sunset at 13:20:00
Email ThisBlogThis!Share to TwitterShare to FacebookShare to Pinterest

SNB bailing ahead of the ECB

It would seem the Swiss National Bank (SNB) are more than confident that the ECB are going to announce a major T-bond buying program next Thursday. With the SNB deciding it is pointless to fight Draghi, world markets saw some wild price action in just about all asset classes. 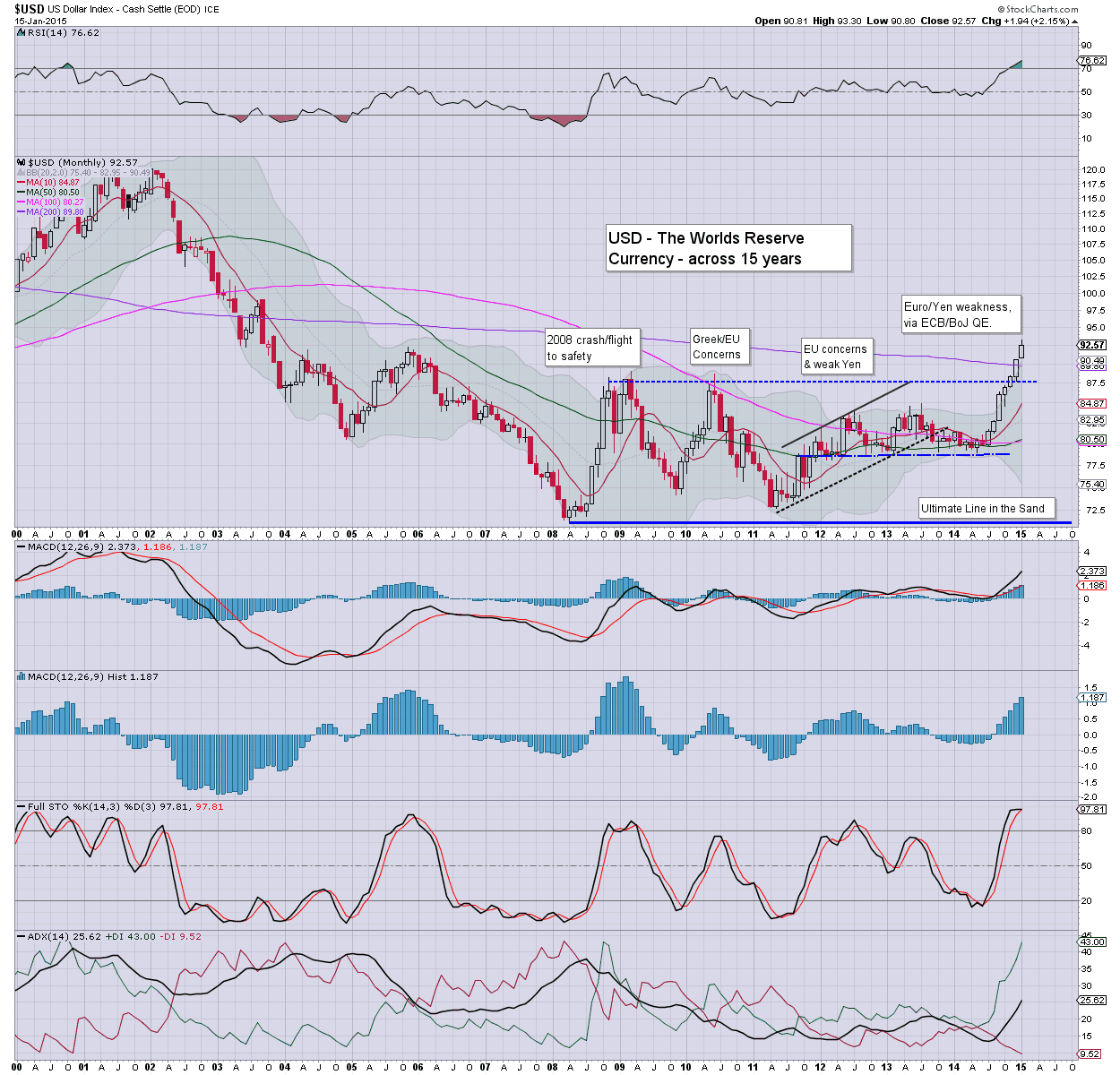 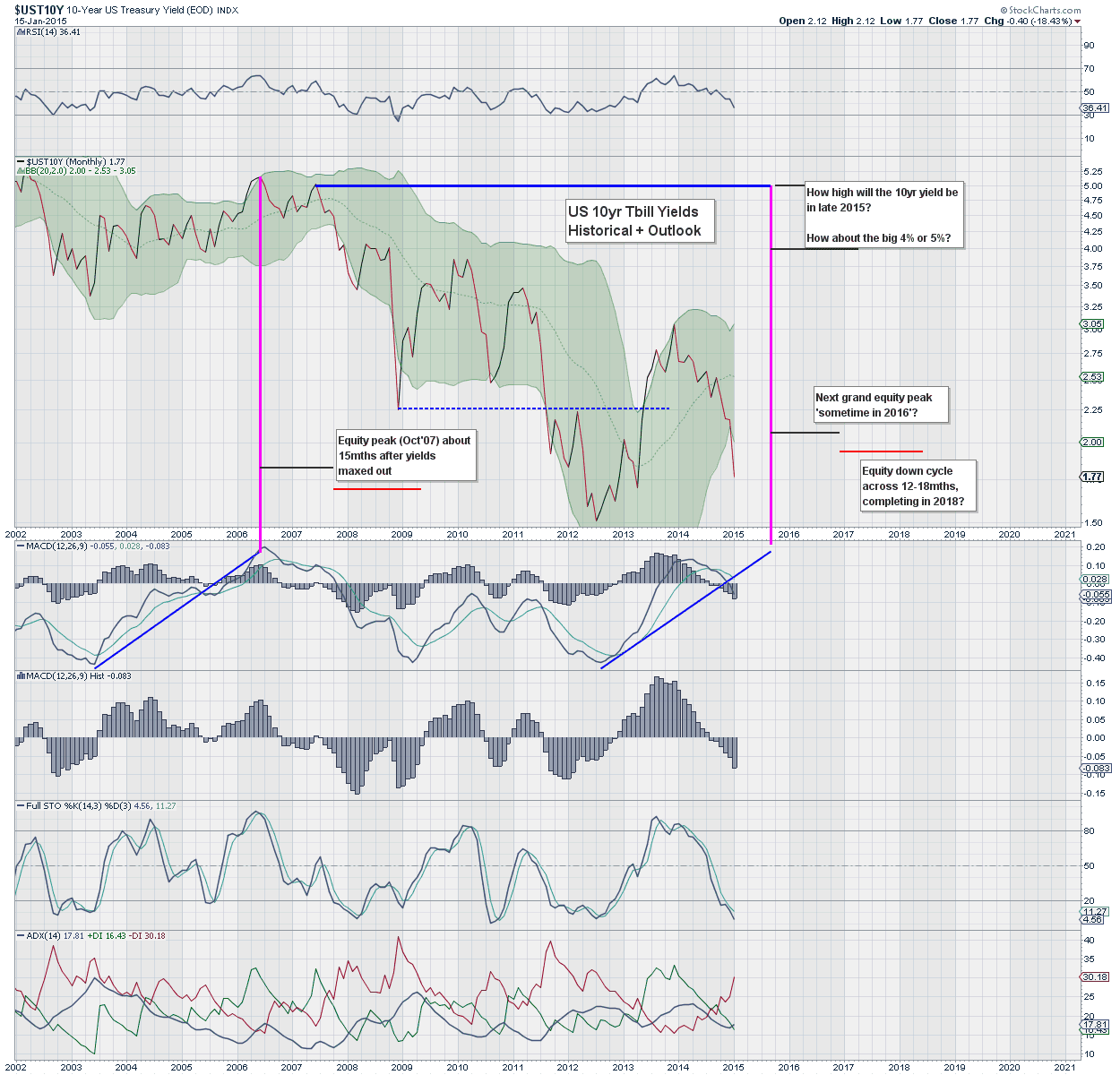 USD continues its broad climb. With the ECB set to announce T-bond buying next Thursday, there is little reason why Euro/$ parity won't occur.

Re: the 10yr. chart. US bond yields continue to collapse. However, underlying MACD (grey bar histogram) is on the low side, and I expect a turn sometime soon.

Friday will be busy... CPI, Indust' prod', and consumer sent'.

It is opex, so expect some chop, especially in the latter part of the day.  Since the US market is closed next Monday, there will no doubt be some pre-holiday trading issues.

*there are 3 fed officials on the loose.. sporadic comments could easily give the market an excuse to sell lower
-- 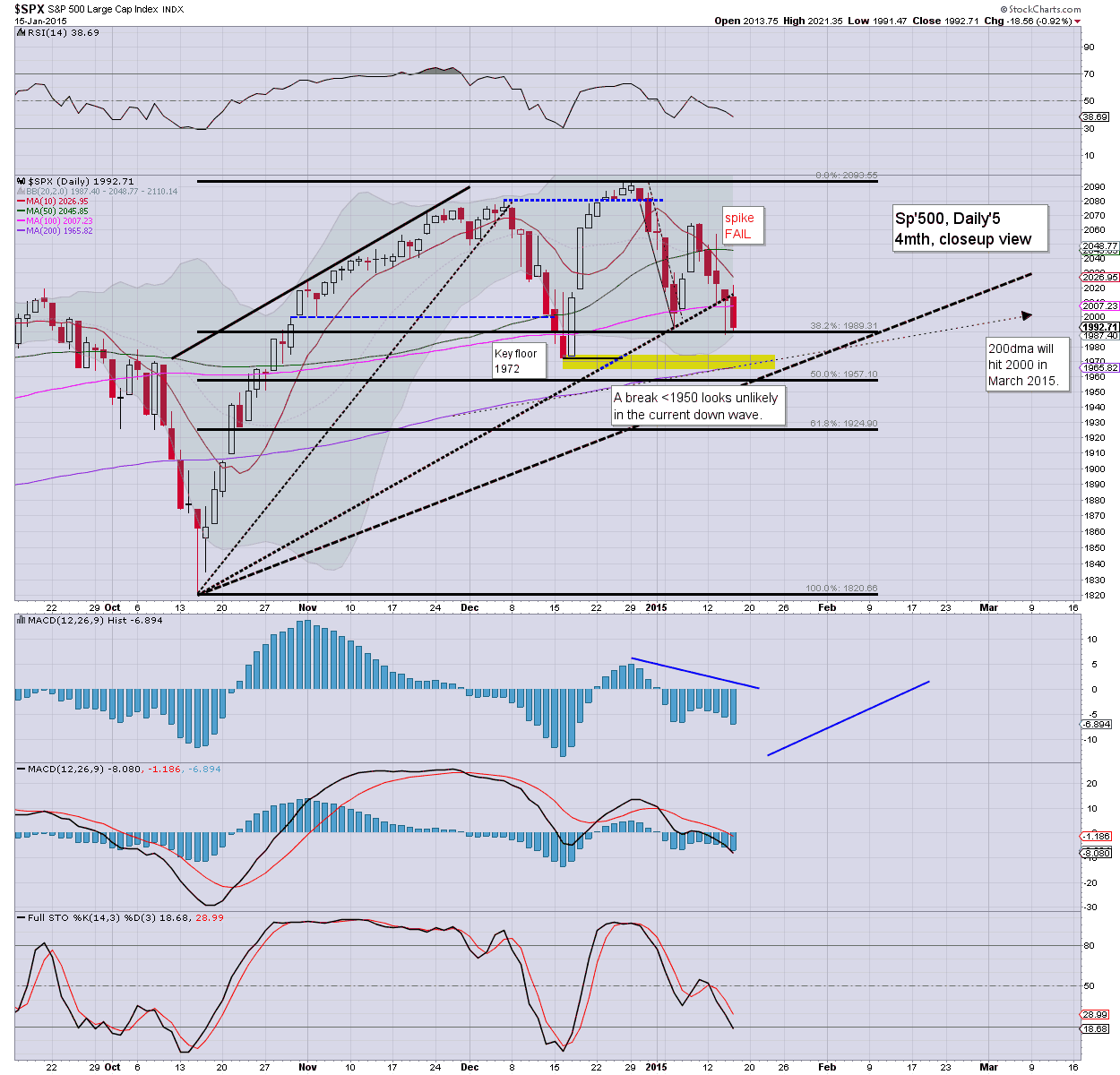 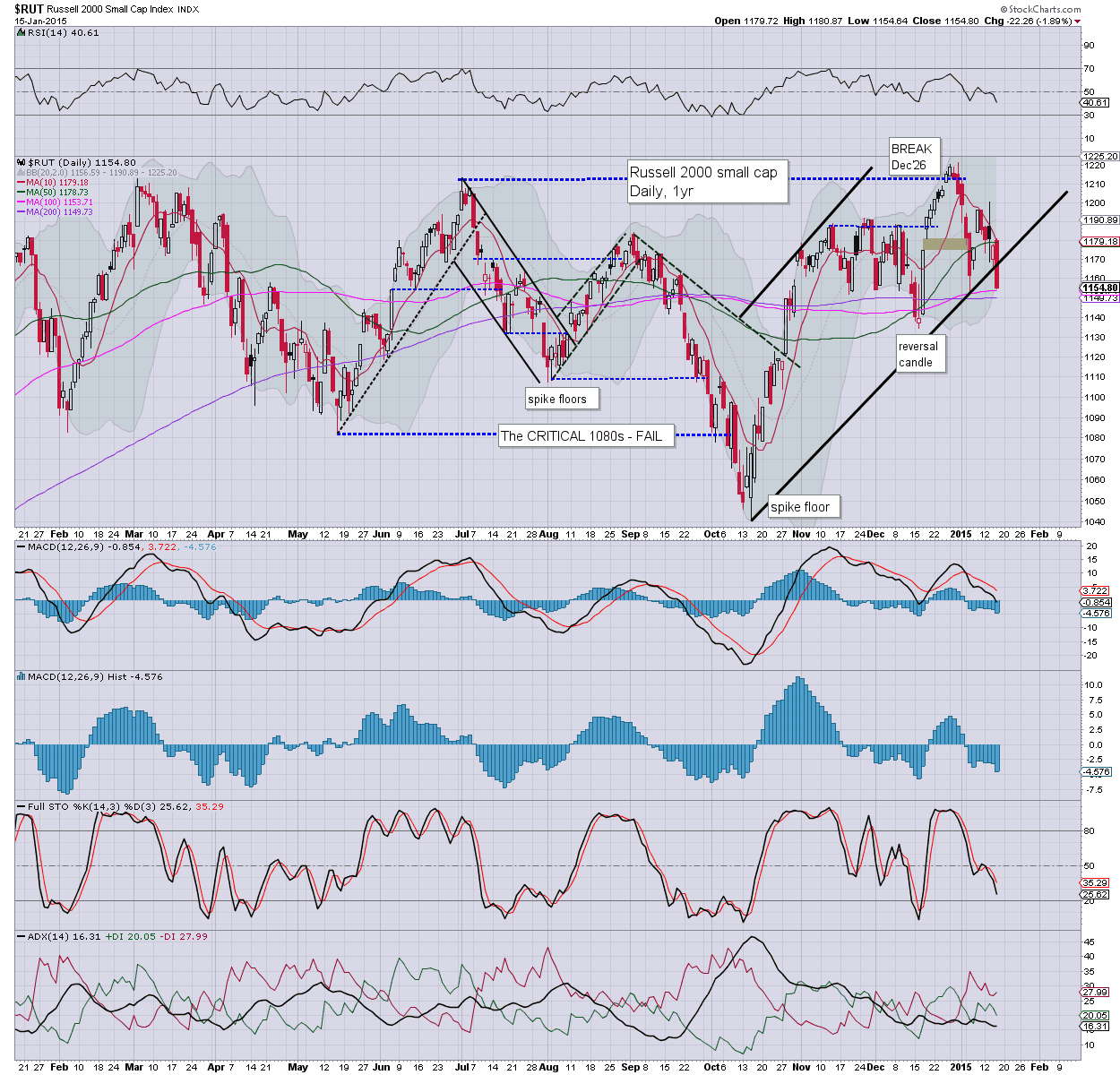 Suffice to say... a fifth day of declines. The only solace for the bulls is that the market didn't break under the Wednesday low of sp'1988. Yet, that does seem likely tomorrow.. or next Tuesday.

With the ECB set to formally announce t-bond buying next Thursday, the equity window for the bears has another 2 or 3 days left in it.
--