It was a somewhat bearish week for most US equity indexes, with the sp'500 net lower by -15pts (0.6%) to 2461. More broadly though, most indexes are holding the mid term bullish trend from early 2016. Near term outlook is bearish into early October, with a conservative down wave target of around 4-5%. 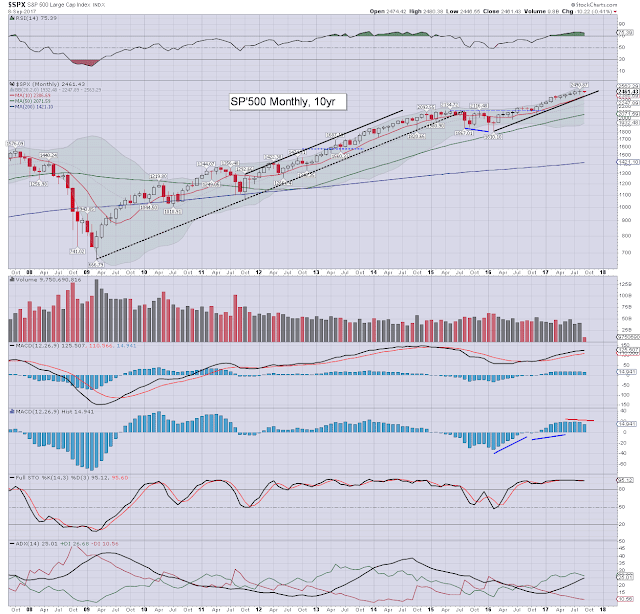 First, note that August broke a new historic high of 2490, with some cooling to 2417. The August close of 2471 actually made for a black-fail doji candle. Those are exceptionally rare on the bigger weekly/monthly cycles. The August candle is a subtle warning of at least some degree of 'problems' across Sept-Oct'.

September has been choppy so far, pushing to 2480, but is starting to lean weak again. Underlying MACD (blue bar histogram) cycle is ticking lower. At the current rate, a bearish cross is viable in November. The key 10MA is currently at 2386, and rising by 25-30pts a month. Core mid term trend - from early 2016, is currently around 2400, which itself is a key psy' threshold.

Best guess: near term weakness to test the 200dma - soon in the 2370s, where the lower weekly bollinger is also lurking. Renewed upside >2400 looks probable. The year end target of 2683 remains valid, and would only be negated with a bearish monthly close.

Equity bears should be focused on how Sept' and Oct' settle. It won't take much to achieve a monthly close under the key 10MA, but this market remains scary strong, and for now... such a monthly close looks unlikely. October 2014 is a good example where we broke the 10MA, but then whipsawed upward into end month, with a subsequent 7 months of upside into May 2015.
-- 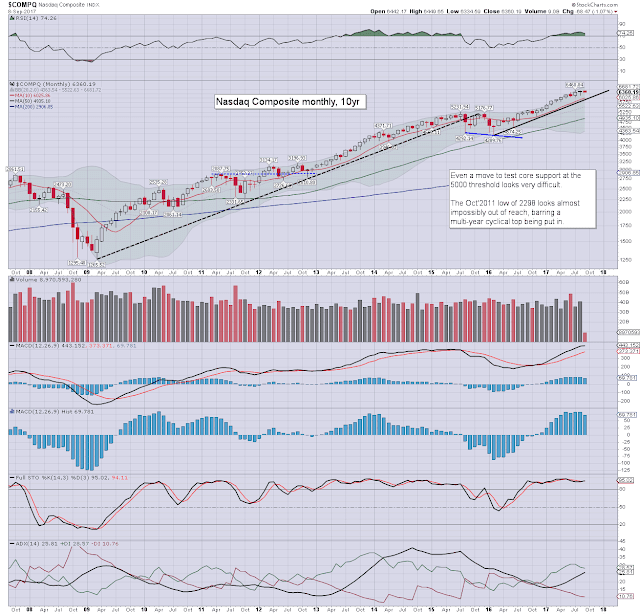 The tech sector remains super strong, with the Nasdaq comp' just 100pts (<2%) from recent historic highs. The key 10MA is currently near 6k, which is almost 6% lower. Even if the equity bears see the market retrace that far down, there will be extreme threat of a whipsaw back upward, with further broad upside into spring 2018. From October onward, 6K will be core support. 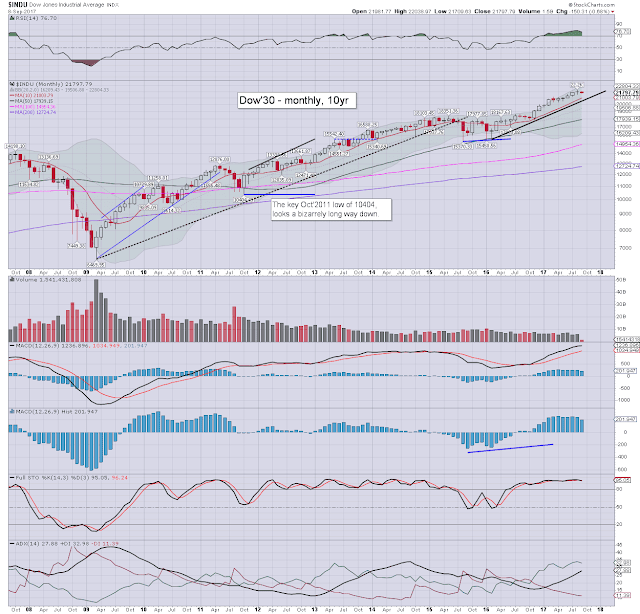 The mighty Dow saw a new historic high of 22179 in August, and settled this week at 21797. The key 10MA is around the 21k threshold.. roughly 4% lower. From October onward, core rising trend - from early 2016, will be around 21k. Indeed, the 21k threshold is something to keep in mind across the next few weeks. Even if 21k fails, there will be massive support at the giant psy' level of 20k. If the equity bulls can hold things together across Sept/October, a yearly close >23k is still within range. 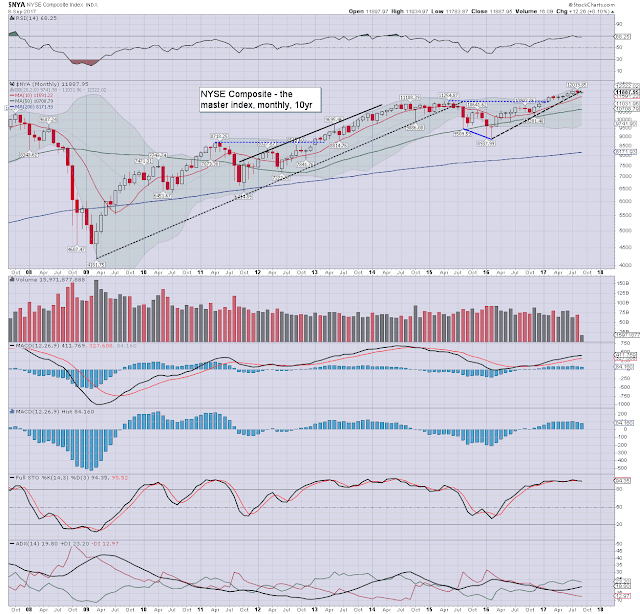 The master index (as I like to call it) broke a new historic high of 12019 in August. However, it then saw a borderline break of rising trend. The key 10MA is currently in the 11500s, and still rising. Equity bears need to see a monthly settlement <11500 to have some clarity that August was a mid/long term high. Any bearish monthly close would offer the lower bollinger, currently at 9741, and soon around 10k - which is 17% lower (equivalent to sp'2K). 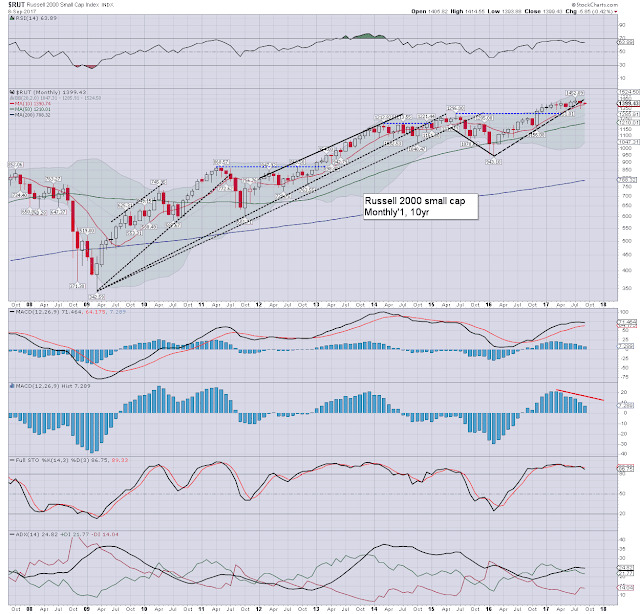 The second market leader saw a very decisive break of mid term rising trend in August, swinging from 1452 in July to 1349 in August. This break merits serious consideration. The key 10MA is currently at 1390, and a Sept' or Oct' close under it looks increasingly probable. That would be suggestive other indexes would eventually follow within 1-2 months.

Underlying MACD is threatening a bearish cross in October. The lower monthly bollinger will have likely risen to around 1150 by November, which was the pre-election Nov'2016 low. Note that 1150 is currently 17% below current levels. Finally, keep in mind the key Feb'2016 low was 943, which would be another 18% lower from 1150. 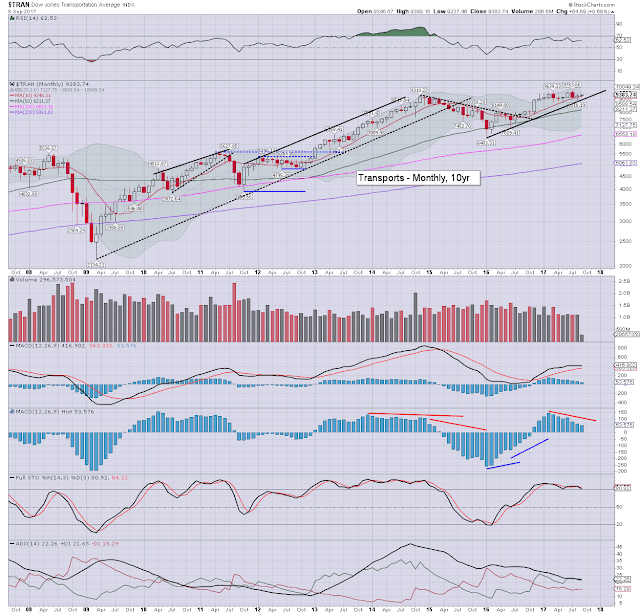 The old leader - Transports, peaked in July (with the R2K), swinging from 9763 to 9010 in August. So far, the tranny is still broadly holding the 10MA, but its only another 2% lower. Underlying MACD has been broadly ticking lower since February of this year. At the current rate, a bearish cross is viable in October. Core rising trend from early 2016 is currently around the 9k threshold. Any Sept' or Oct' close <9k would merit alarm bells. First soft downside target would be around 7500, which is currently a clear 20% lower.

For the equity bulls to have high confidence for a bullish 2018, they need the Trans to break and hold >10k by year end.
--

Four of the six US indexes are holding the mid term bullish trend from early 2016. The R2K saw a decisive break in August, whilst the NYSE comp' saw a borderline break.

All indexes are still broadly holding their respective key 10MAs.
--


Issues into the autumn

Two key problems for the equity bulls into the autumn are within the financial and energy sectors. Financials need another rate hike, which the fed is clearly not going to provide until at least December. Meanwhile, energy stocks look vulnerable as with summer driving season fading away, WTIC could easily test the June low of $42.05.

A third issue is the 'Trump' trade, especially within the heavy industrials. Can the US congress and senate pass any kind of tax or infrastructure bill?

Finally, the debt ceiling issue rumbles on, and is now set to rear up again in December. It increasingly looks like there is a push to just remove the ceiling entirely, and that would not be bullish for the USD.
--


Droning on about the 10MA

I recognise many of you use other MAs (or EMAs), but whether you prefer the 13, 12, 11, 10, or 9, from a technical perspective, the monthly close is what really matters. 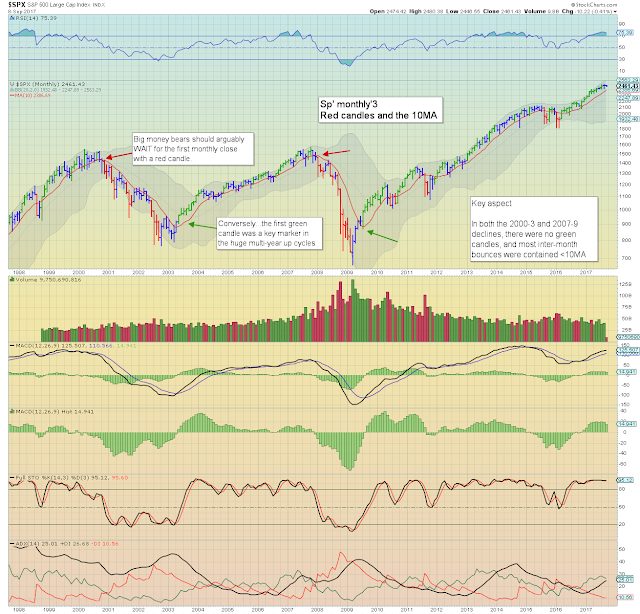 Its notable that despite a new historic high, the August candle actually settled blue, and we have another blue for September. Equity bears should be seeking a red candle which settles under the key 10MA. That is something I will be looking for, whether at the September or Oct' close.

If such a bearish monthly close occurred, the first downside target would be the lower monthly bollinger, currently at 1932, and rising by around 20/30pts a month.

For now, such talk IS crazy talk, and anyone who is trying to short this madness (even with tight trading stops) should keep in mind the broader price action, which remains (almost entirely) bullish.
--

The US market will begin the week focused on the aftermath of Hurricane Irma. There is also the ongoing geo-political tension surrounding North Korea. There is always going to be the sporadic threat of another missile launch or nuclear test, or perhaps equally horrifying... if Trump starts tweeting more 'fire and fury' talk.

*Friday is quadruple witching, so expect a lot of chop, especially in the late afternoon.

**As there is an FOMC Sept'19/20, the blackout period is in effect, and there will be no fed officials on the loose.
--


If you value my work, subscribe to me for $20pcm.